On this page:
Introduction
Learning about the Keyboard and Training your Ears!
Pitch Notation
Transposition

The following section of the website will use diagrams of the keyboard as well as free video demonstrations designed to help you to get used to the sounds and to train your musical ear.

You will then learn about notation and transposition.  Teachers can present all this information on their interactive whiteboards, or pupils can go to a computer and visit this website as an extension activity. Downloadable worksheets (coming soon) will help to consolidate your knowledge.

Learning about the Keyboard and Training your Ears!

In Western Classical Music, since the time of JS Bach, pitch has been divided into equally spaced semitones or half steps.  The easiest way to understand these semitone/half step intervals is to see them on a keyboard.  (An interval is the distance between two notes.)

The notes on the keyboard go from low to high as you go from left to right.

The distance between any note and its next-door neighbour is called a semitone (UK) or a half step (USA):

We label all the white notes on a keyboard with the first seven letters of the alphabet: A-G.

The distance from a letter to the next same letter is called an octave:

The black keys have two names each:

The interval of a tone or whole step is two semitones/half steps.

Stave/Staff
To write music down, we use this five-lined stave/staff:

We can put notes on the lines and on the spaces:

Clefs
We then need a clef to tell us whether we are playing high notes or low notes.

The treble clef is used for high instruments, for example the violin, flute, clarinet, oboe, the right hand on the piano.  The treble clef started out life as a 'G clef', meaning that the curl in the middle started on the line that was the note G.  The 'G clef' could be anywhere on the stave, but towards the end of JS Bach's life, when the development of music printing made it more convenient to use fewer clefs, only the treble clef was used.

The following words can be helpful for remembering the notes on the treble clef staves:

The bass clef is used for low instruments, for example the cello, tuba, double bass, bassoon and left hand of the piano.  The bass clef started out life as an 'F clef', meaning that the beginning of the curl at the top was on the note F and the two dots surround the note F.  With the development of music printing, only the bass clef as we know it, with F on the second line down, survived.

The following words can be helpful for remembering the notes on the bass clef staves:

The alto clef is used for the viola, since the viola uses mid-range pitches.  This allows more notes to lie on the lines of the stave, making the music easier to read.  The alto clef started out life as a 'C' clef.  Middle C is always where the two bumps join.  We now only use the 'alto clef' and the 'tenor clef'.  Middle C is on the middle line of the alto clef stave.

The tenor clef is used for high notes on low instruments such as the cello, bassoon, trombone and euphonium.  This allows more notes to lie on the lines of the stave, making the music easier to read:

The diagonal lines of the sharp cross the lines or spaces surrounding the line or space that the note is on:

Ledger Lines
If the pitch is higher or lower than the notes on the stave, we use ledger lines to add extra notes above and below the staves:

Transposition
Some instruments known as transposing instruments have music written out at a different pitch from the sound that comes out.  This happens for the following reasons: 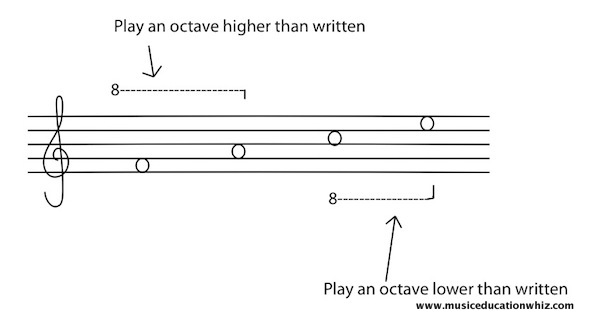