On this page:
Melodic and Harmonic Intervals
Examples on white notes
Perfect and Major
Minor, Diminished and Augmented
Compound

We will begin by focusing on the white notes of the keyboard. The notes below all belong to the key and scale of C major.  To work out an interval, you need to count the first note, the last note and all notes in between.

Now watch the free video below to hear the above examples and also to see them on a keyboard.

Watch the free video to hear the tunes:

The examples above are more precisely described as follows:


Instead of remembering how many semitones there are, simply look at the lowest note, work out the major scale starting on that note, and if the highest note fits into that scale, it will be one of the intervals above.  You just need to remember that the intervals of a 4th and a 5th are perfect, whereas all the rest are major.

A to F sharp

Why are they called major or perfect? 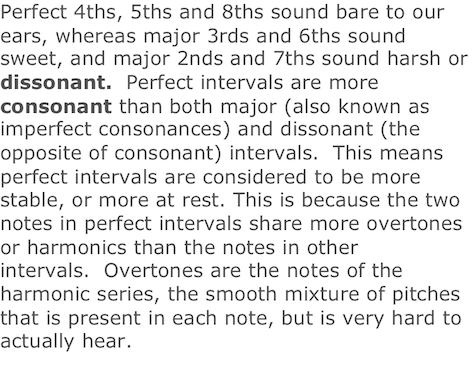 Perfect intervals are easier to tune, because they don’t sound as ‘perfect’ if they are slightly out, and beating can occur (an unpleasant effect caused by the sound waves going in and out of sync with each other).  This is because the ratio of the two pitch frequencies are simple: 2:1 for octaves, 3:2 for 5ths.  The strings on violins, violas and cellos are a 5th apart, and on double basses they are a 4th apart, making it easier to tune them.  Because the same beating problems don’t occur in 2nds, 3rds, 6ths and 7ths, musicians (not pianists because the pitch is fixed) can make a 2nd, third or a sixth or a 7th wider of narrower depending on taste or on what the harmonies are doing.

C to D sharp is an augmented 2nd

C to Ebb is a diminished 3rd

C to E sharp is an augmented 3rd

C to F flat is a diminished 4th

C to F sharp is an augmented 4th

C to G flat is a diminished 5th

C to G sharp is an augmented 5th

C to Abb is a diminished 6th

C to A sharp is an augmented 6th

C to Bbb is a diminished 7th

C to B sharp is an augmented 7th

Now watch the free video below to hear these examples and to see them on a keyboard.

The first two notes of each tune below will help you to recognize the sound of these intervals.


Now listen to them on this free video:

How to work out whether an interval is Augmented, Minor, or Diminished.

1)   Work out the key and notes of the major scale beginning on the lowest note.

2)   Change the highest note to the note with that letter name that does belong to this major scale.

3)   Count the lowest note, the highest note you worked out in number 2 and all the notes in between.

4)   Work out if the actual highest note is a semitone higher or lower than the note you worked out in 2.  If it is higher it is augmented, if lower, minor or diminished.

2)   Change the highest note from D sharp to D because there is no D sharp in F major but there is a D.

2)   Change the highest note from F to F sharp.

When an interval is bigger than an octave, we can either call it a 9th, 10th etc, or a compound 2nd, 3rd etc.

Now watch the free video to hear them and see them on the keyboard: