On this page:
Introduction
Introduction to two poems by Thomas Hardy
'The Division'
'Something Tapped'
Project
Footnotes

This cross-curricular project fuses English Literature with Music, Drama, Film-making and Animation.  The class will analyse two poems before watching musical film adaptations of them.

They will then write a presentation on the musical interpretation of the poetry before embarking on their own project to produce a musical play, film or animation adaptation of a poem of their choice by Thomas Hardy. 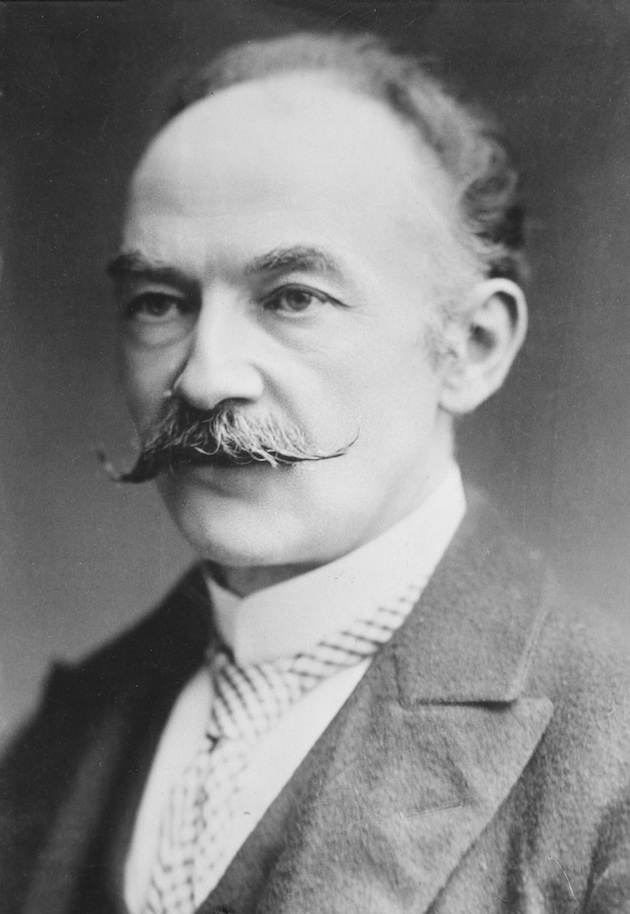 Introduction to the poems

The two poems to be studied concern Thomas Hardy's first wife, Emma Gifford.  In the first poem, 'The Division', Emma is still alive, whereas in 'Something Tapped' she is dead, and Hardy thinks he sees her at the window.

Hardy's first marriage was not a very happy one.  There were faults on both sides.  He was apparently a difficult man to live with, and his wife, when the glamour of their Cornish courtship faded, was seen, in the words of Cecil Day Lewis, to be "snobbish, small-minded and incapable of living gracefully in the shadow of Hardy's genius".[1]  It is possible that she may have also suffered some kind of mental derangement, which Hardy hints at in 'The Division'. Although they drifted apart during the later years of their marriage, her death released memories from the distant past - especially of their romantic first meeting in Cornwall.  He travelled back to Cornwall in early March 1913 to "revisit the scenes of vanished joy" (Norman Page), [2] and during this trip, Hardy produced what many have said to be his best poetry.

Watch this video about the life of Thomas Hardy to learn more:

This was written in 1893 when Emma was still alive.  There are many opinions as to what the poem is about:  Evelyn Hardy believes that Thomas and Emma Hardy are sitting in a room together, yet there are 'a hundred miles between' them due to 'that thwart thing', their alienation;[3]  Cecil Day Lewis has the idea that 'that thwart thing' is Emma's mental derangement; [4] Francis Bertram Pinion thinks Hardy is not addressing Emma, but his mistress, Florence Hennicker who is 'a hundred miles' away in London. [5]

Rain on the windows, creaking doors,
With blasts that besom the green,
And I am here, and you are there,
And a hundred miles between!

But that thwart thing betwixt us twain,
Which nothing cleaves or clears,
Is more than distance, Dear, or rain,
And longer than the years!

The poem has three stanzas.  A study of the linguistic devices employed by Hardy in stanza one, reveals his careful portrayal of drawn out anger.  Find examples of:

In stanza two, Hardy conjures up a feeling of resignation by employing soft consonants (w, m, r, l, y), and sibilants.  Find examples of these.

In stanza three, Hardy reverts back to alliteration, hard/sharp consonants, and long vowels on the last word of each line to convey intense wrath.  Find examples.

Note that this is the only iambic cross-rhymed quatrain, meaning that tension is sustained throughout the stanza.

Now watch this musical film adaptation of 'The Division' and do the task below:

Purchase DVD including this film, entitled 'Songs of Love and War'.

Write an account of how the music by Andrew Downes sets the scene and echoes the sentiments conjured up by Thomas Hardy. Use your answers from the activities above to help you.  Present your work to the class.

This was written in August 1913.  The poet is awoken by a sound at the window and believes it is Emma's ghost asking him to join her.  When he moves closer he sees a moth tapping at the window instead.


Something tapped on the pane of my room
When there was never a trace
Of wind or rain, and I saw in the gloom
My weary Beloved's face.

"O I am tired of waiting," she said,
"Night, morn, noon, afternoon;
So cold it is in my lonely bed,
And I thought you would join me soon!"

I rose and neared the window-glass,
But vanished thence had she:
Only a pallid moth, alas,
Tapped at the pane for me.

The poem has three stanzas, and is predominantly monsyllabic emphasising melancoly, coldness and loneliness.  Find all the words in the poem that have more than one syllable.

Notice that the long, soft vowels at the end of each line add to this atmosphere.

The second line contains monosyllabic words with long vowels. What feeling does this help to suggest?  Try saying it to help you to find the answer.

The short vowels on 'bed' and 'said' are in stark contrast to the long vowels.  Why do you think Hardy has done this?

Line two of stanza three is the only line of the poem with a regular meter (an iambic tetrameter).  Why would Hardy want to highlight this line?


Now watch this musical film adaptation of 'Something Tapped' and do the task below:

Purchase DVD including this film, entitled 'Songs of Love and War'.

Write an account of how the music by Andrew Downes sets the scene and echoes the sentiments conjured up by Thomas Hardy. Use your answers from the activities above to help you.  Present your work to the class.

In groups of four, choose another poem by Thomas Hardy and analyse it in the same way as we did above.  Then set your poem to music.  This can either be background music while the text is spoken, or someone can sing the text.  Then create a play, film or animation to go with your musical setting.  Good luck!


The following three films may give you some more inspiration.  In these three films, Hardy looks back on his life with Emma and appears to be confronting feelings of guilt.

Purchase DVD including these films, entitled 'Songs of Love and War'.