Song of the Eagle
for Flute Choir 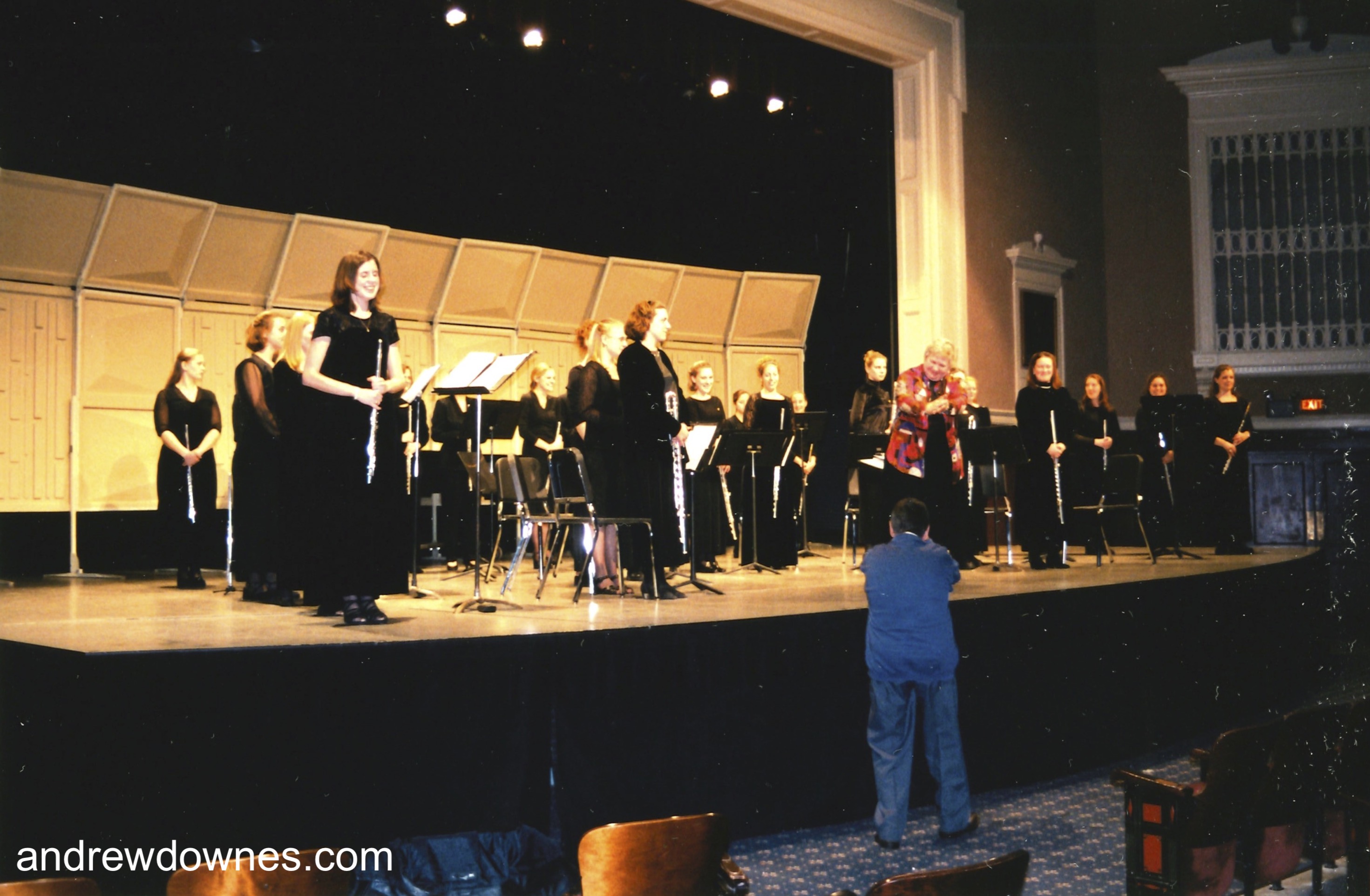 An account by his wife and publisher, Cynthia Downes, posted on January 24th, 2023

SONG OF THE EAGLE

This work was commissioned to celebrate the 25th anniversary of the James Madison University Flute Choir, the oldest flute choir in the USA, founded and directed by Carol Kniebusch Noe.  The choir recorded the work for a special CD, entitled Sounds and Colours, devoted to Andrew’s Flute Choir Music in January 2000. Their recording has been broadcast many times on Musicians Page Radio, Los Angeles, USA, and was posted as an online share in July 2020 during Andrew Downes 70th birthday year. 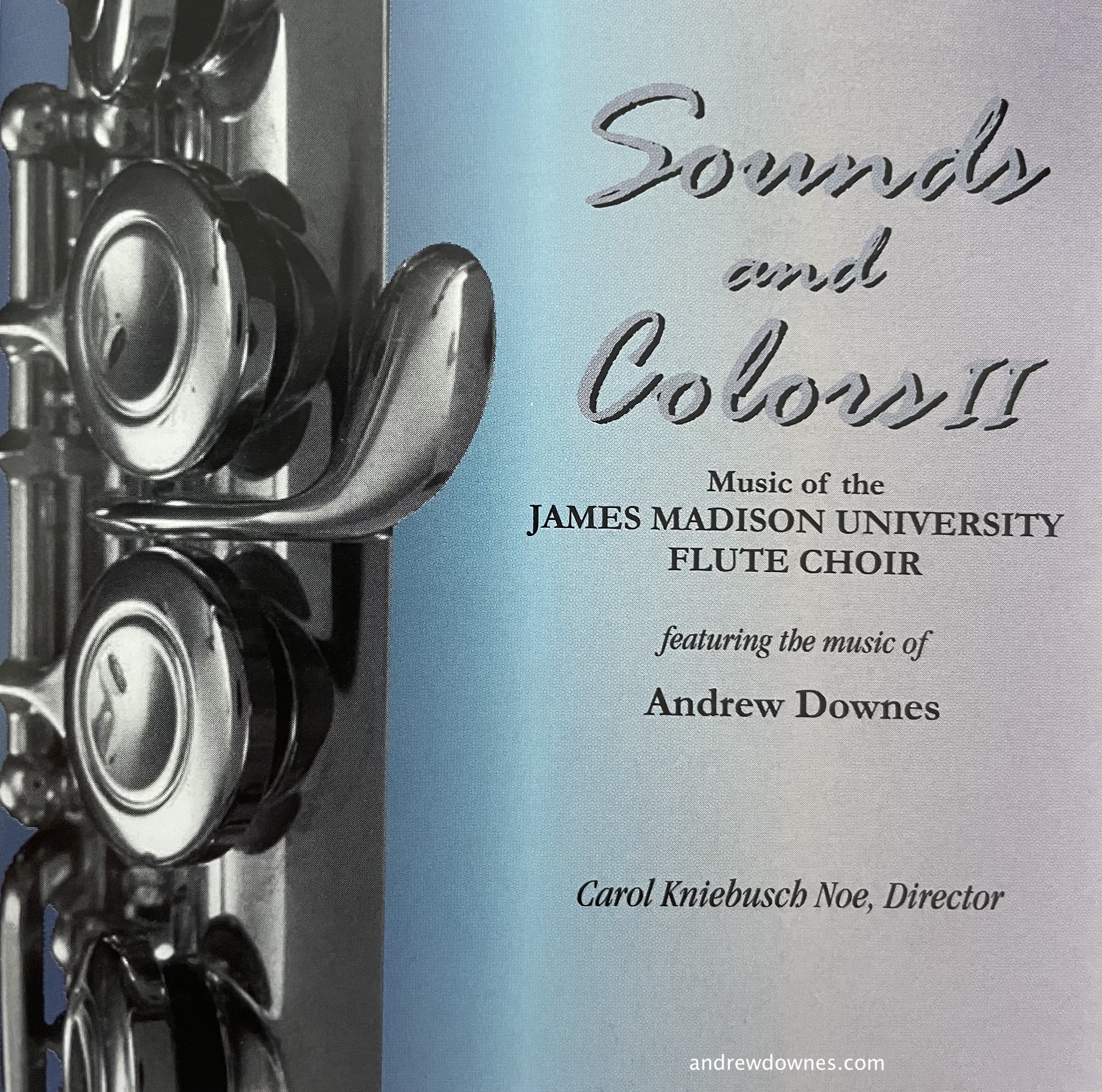 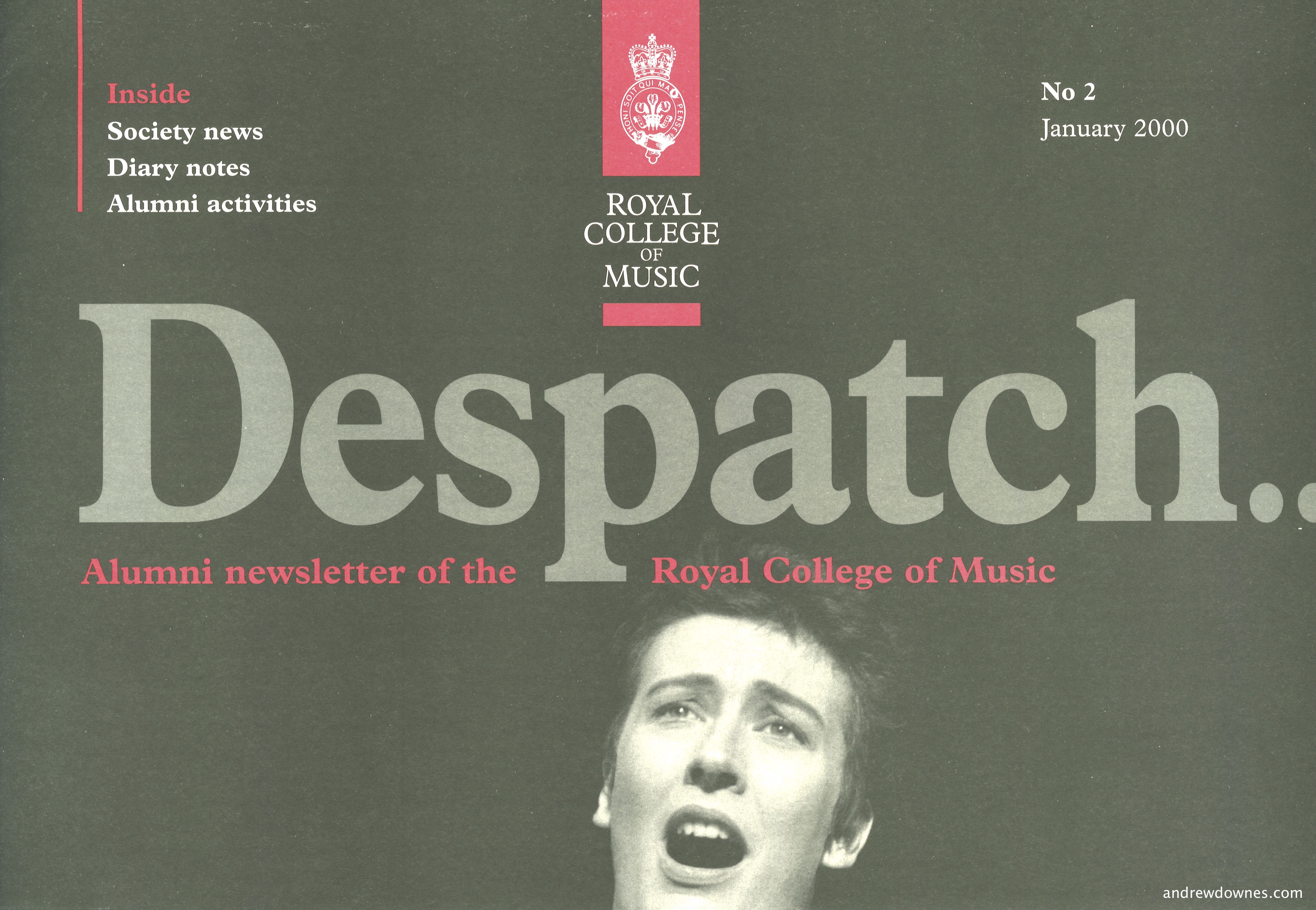 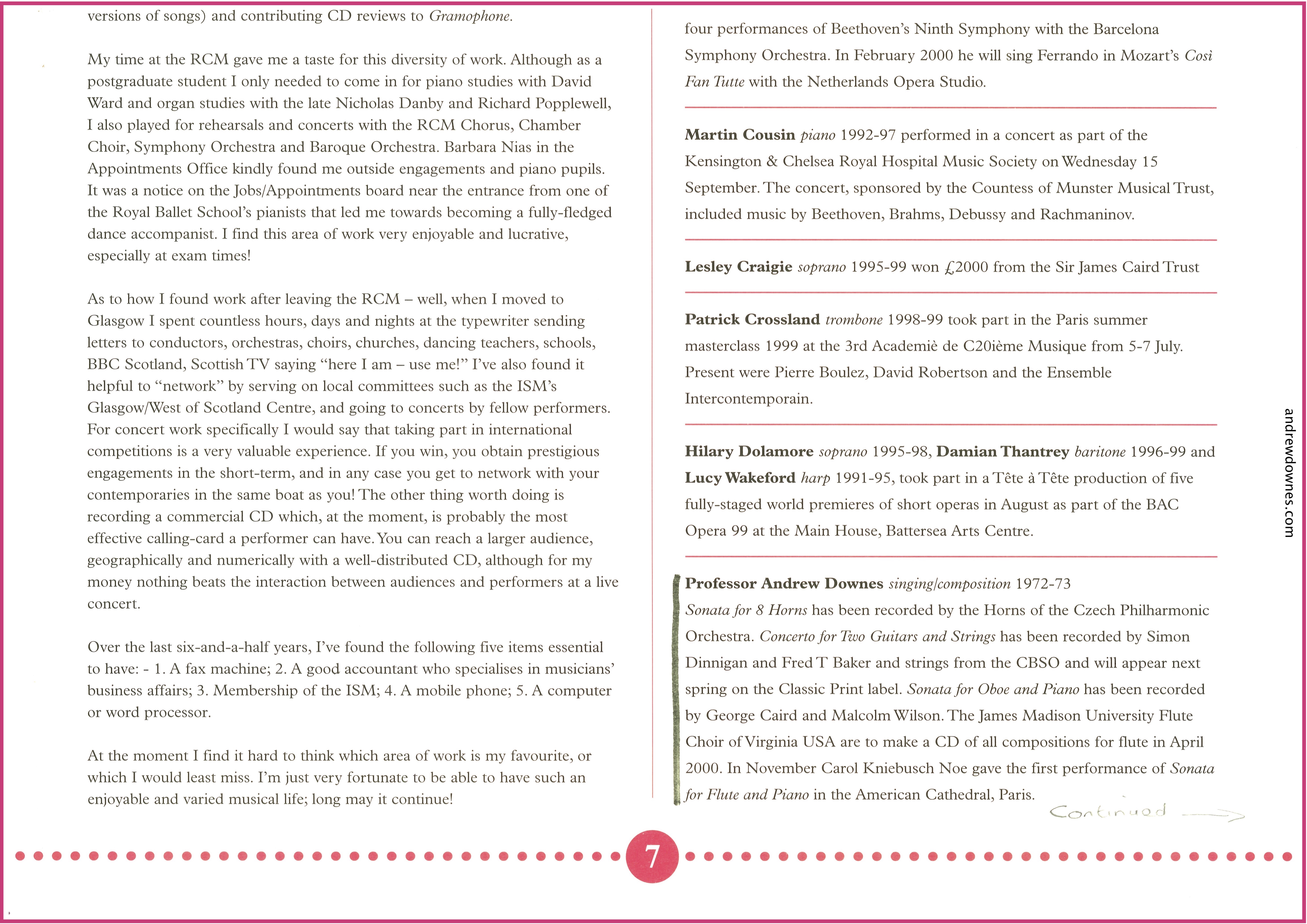 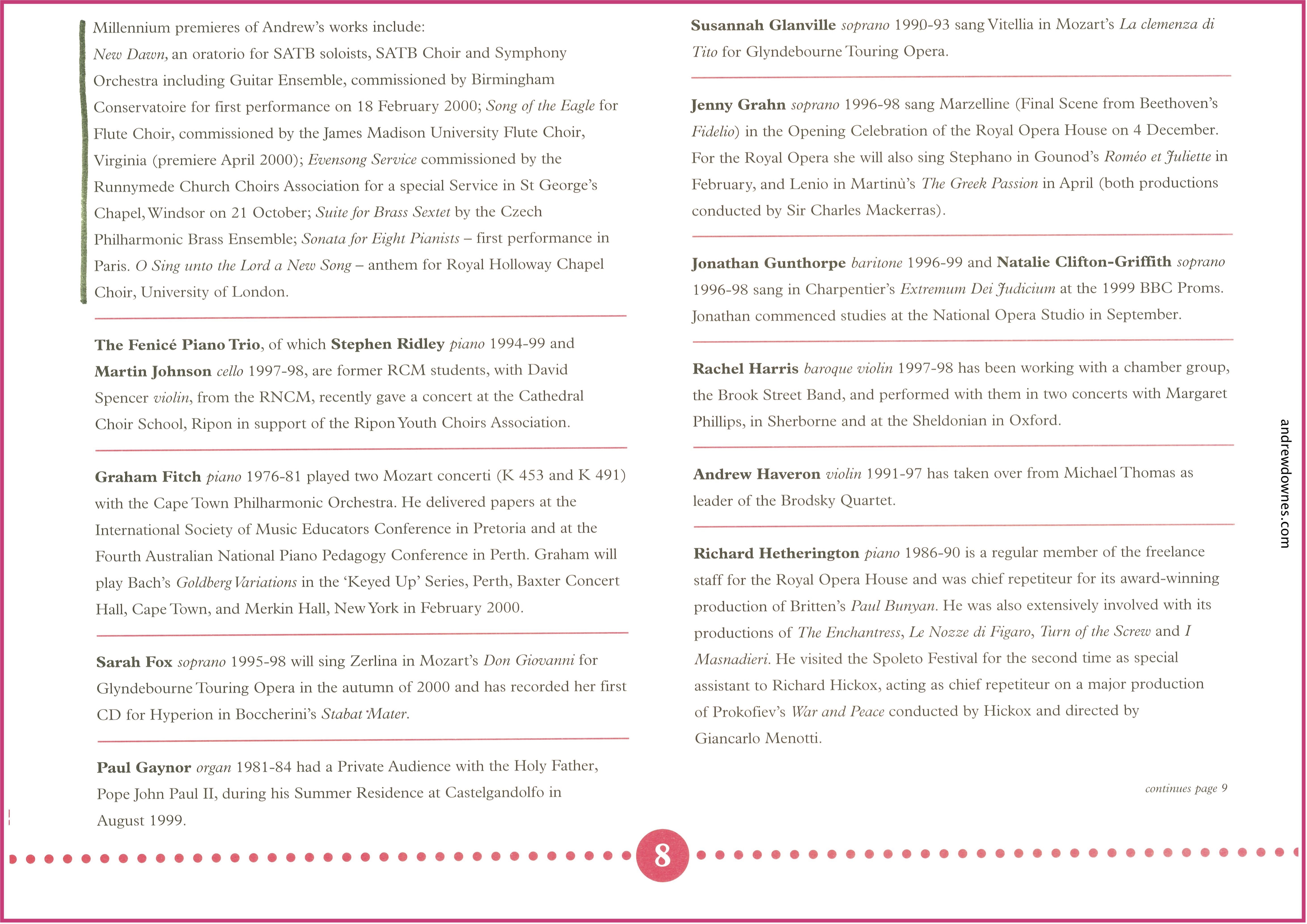 When The JMU Flute Choir made their recording of Song of the Eagle, together with Andrew’s Sonata for 8 Flutes or Flute Choir and his Fantasia for Alto & Bass Flute Solos with 5 part Concert Flute Choir (in January 2000), Andrew flew over for the recordings and was delighted with them.  On his way back to the airport, however, he had to drive through an ice storm.  The conditions were terrifying.  Carol and the Flute choir were very worried about him.  When he eventually got back to England, thankfully in one piece, I was glad I hadn't known about the storm, having stayed back in England. 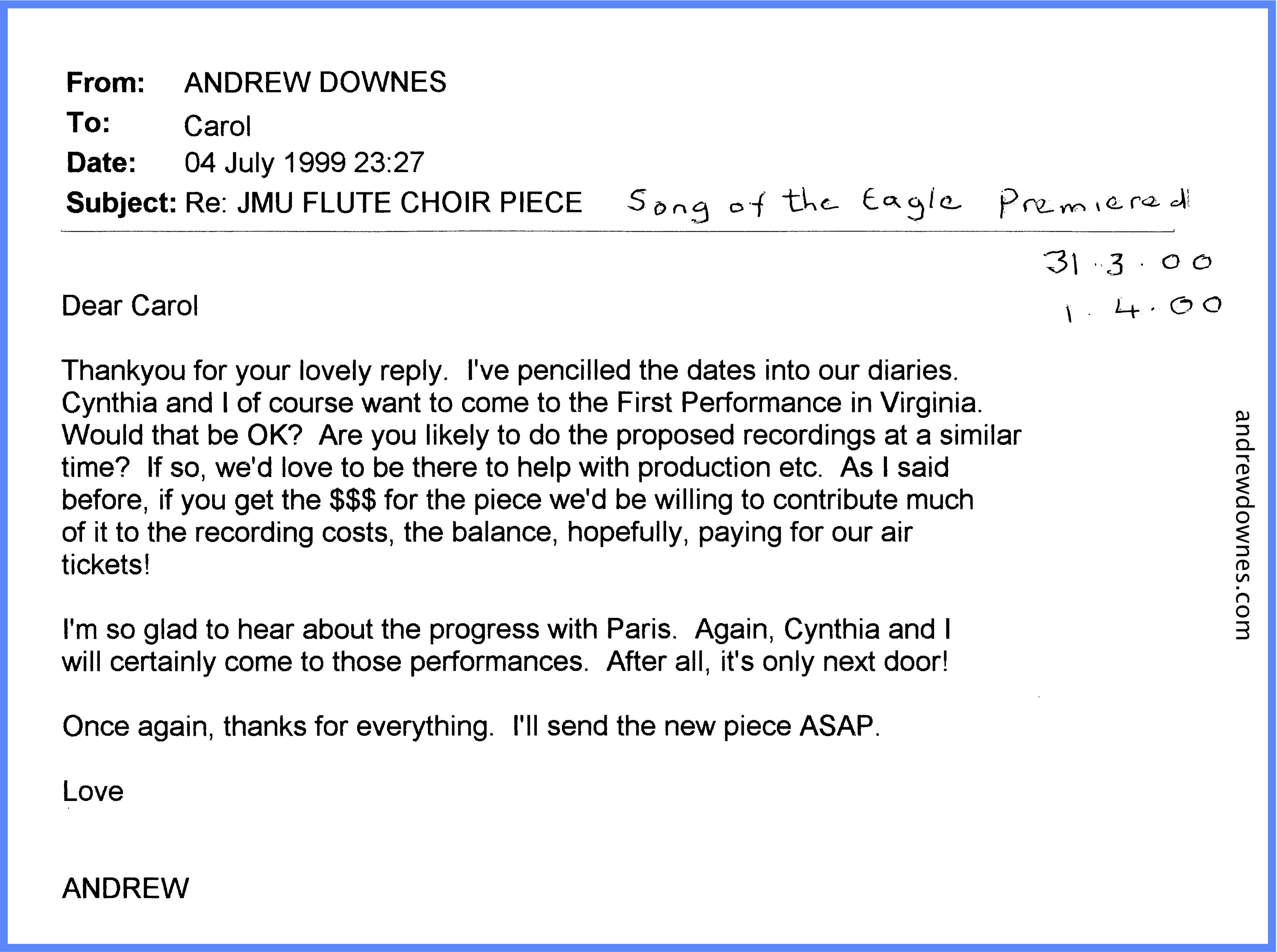 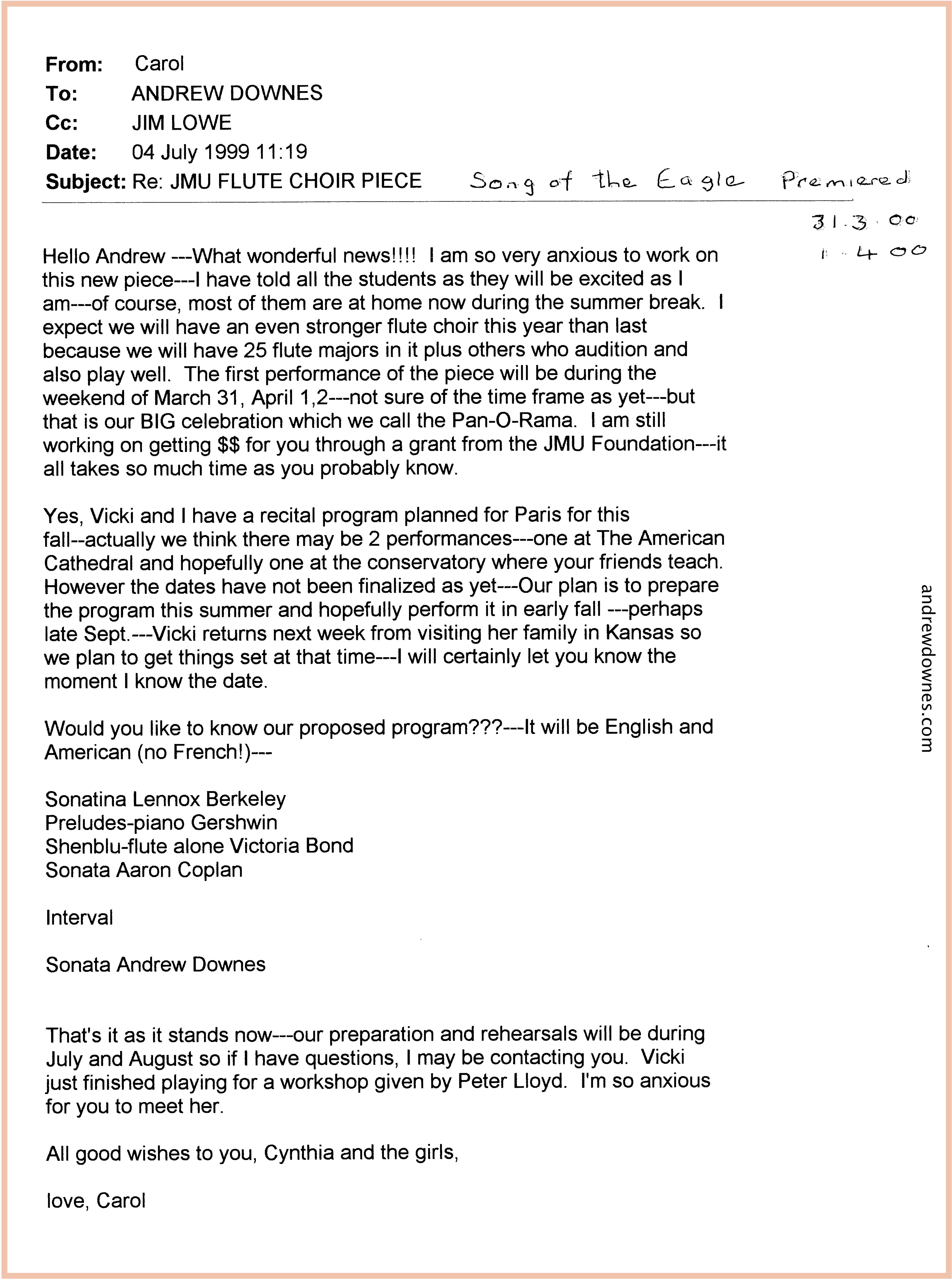 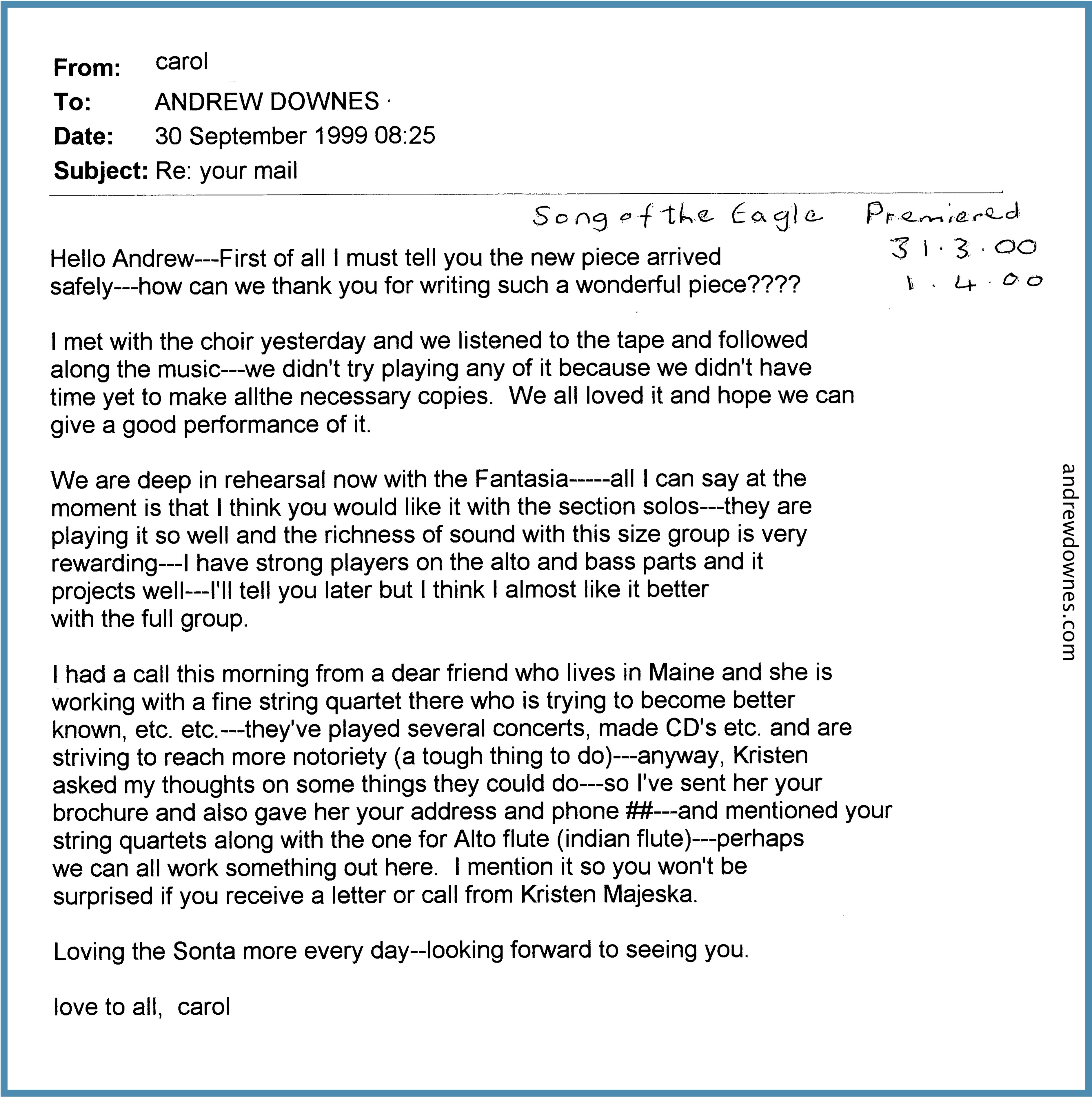 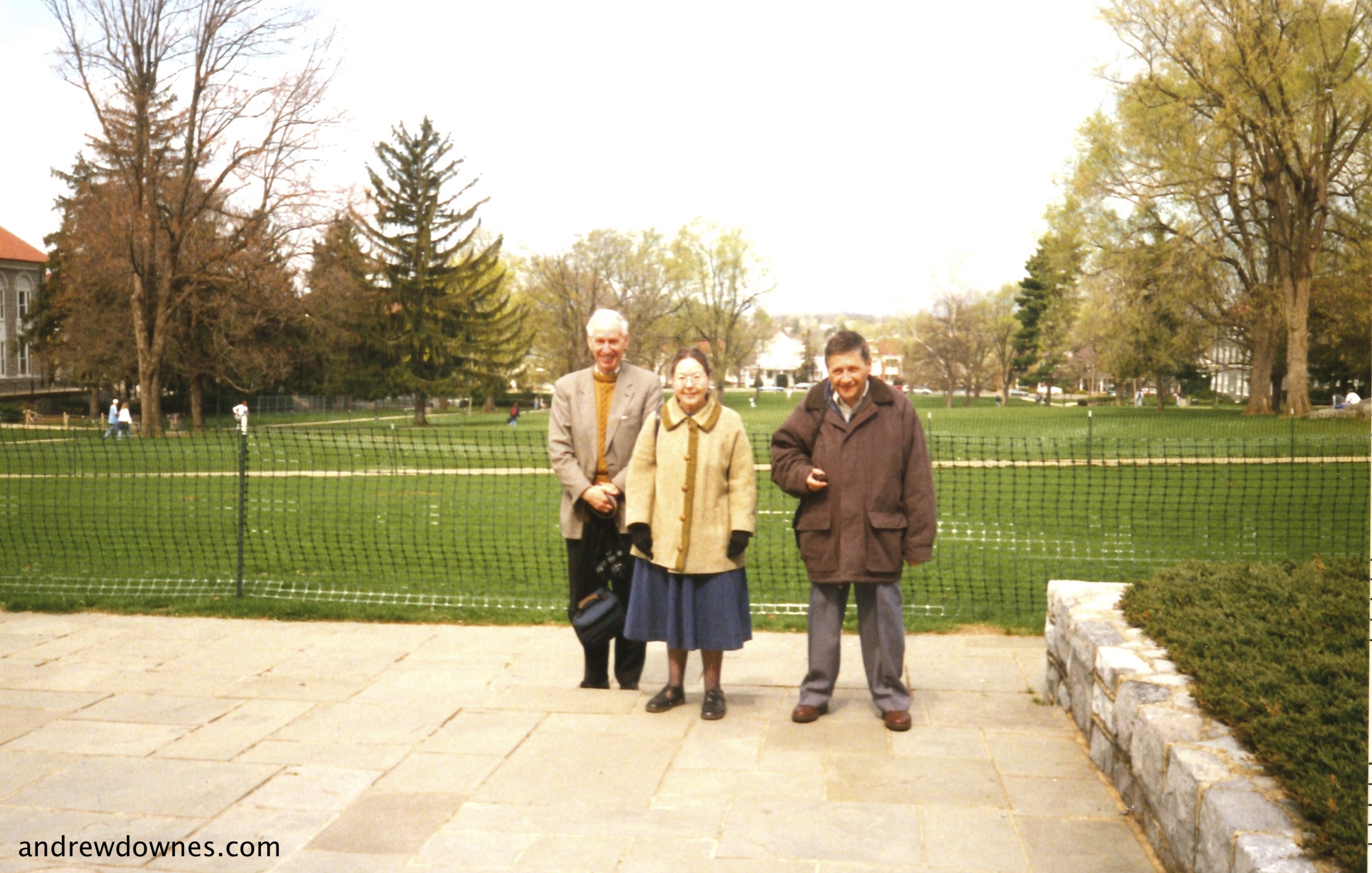 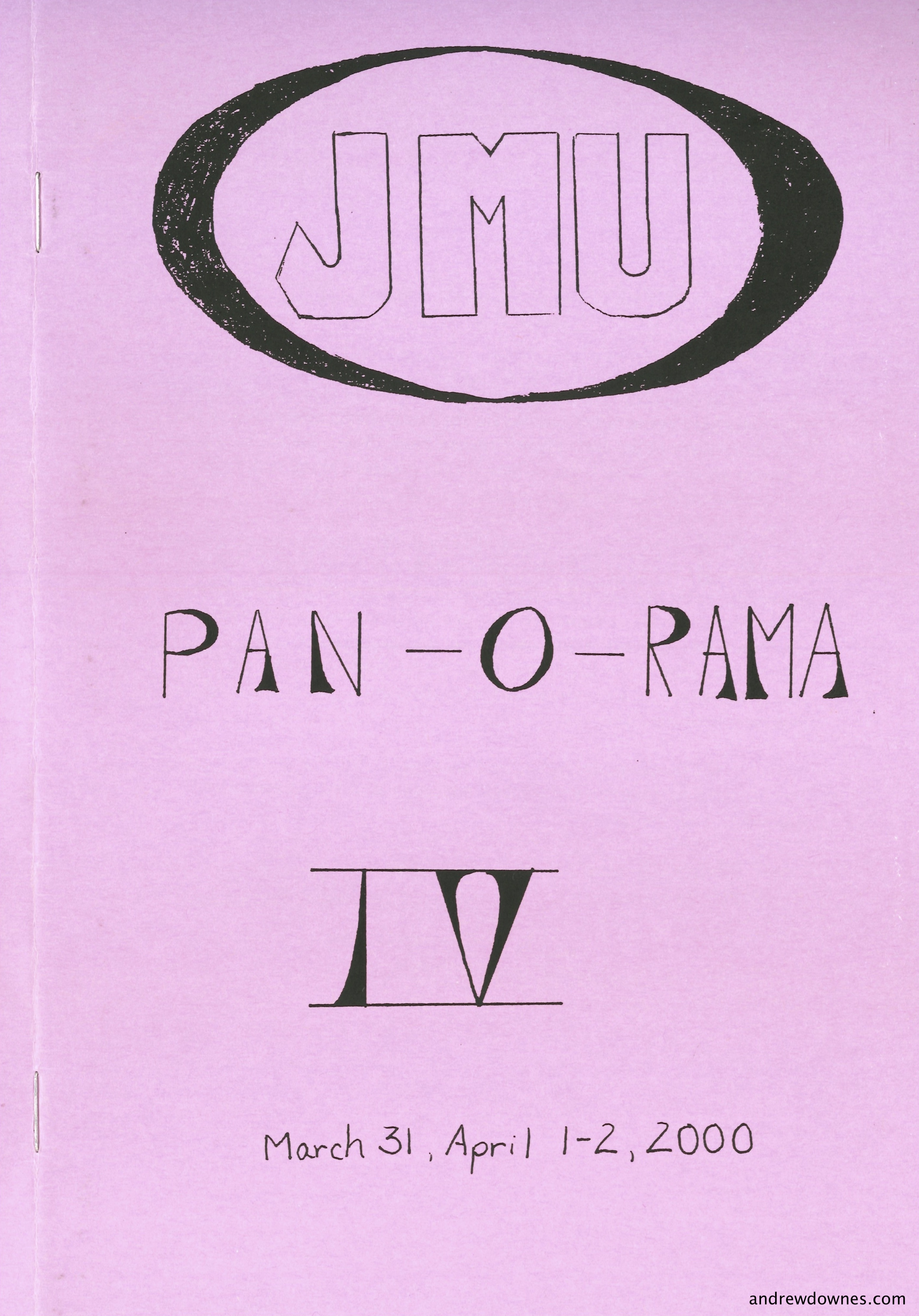 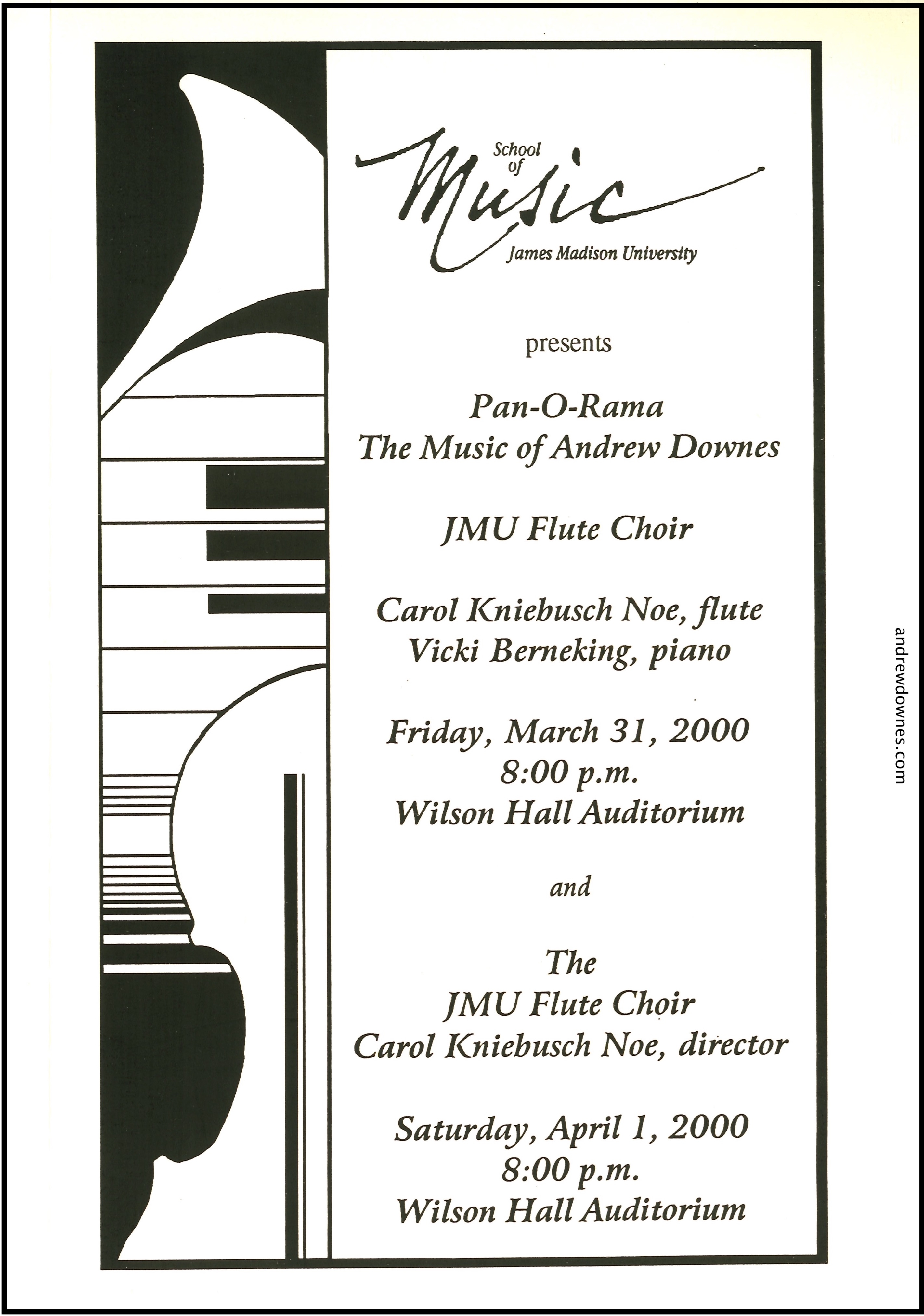 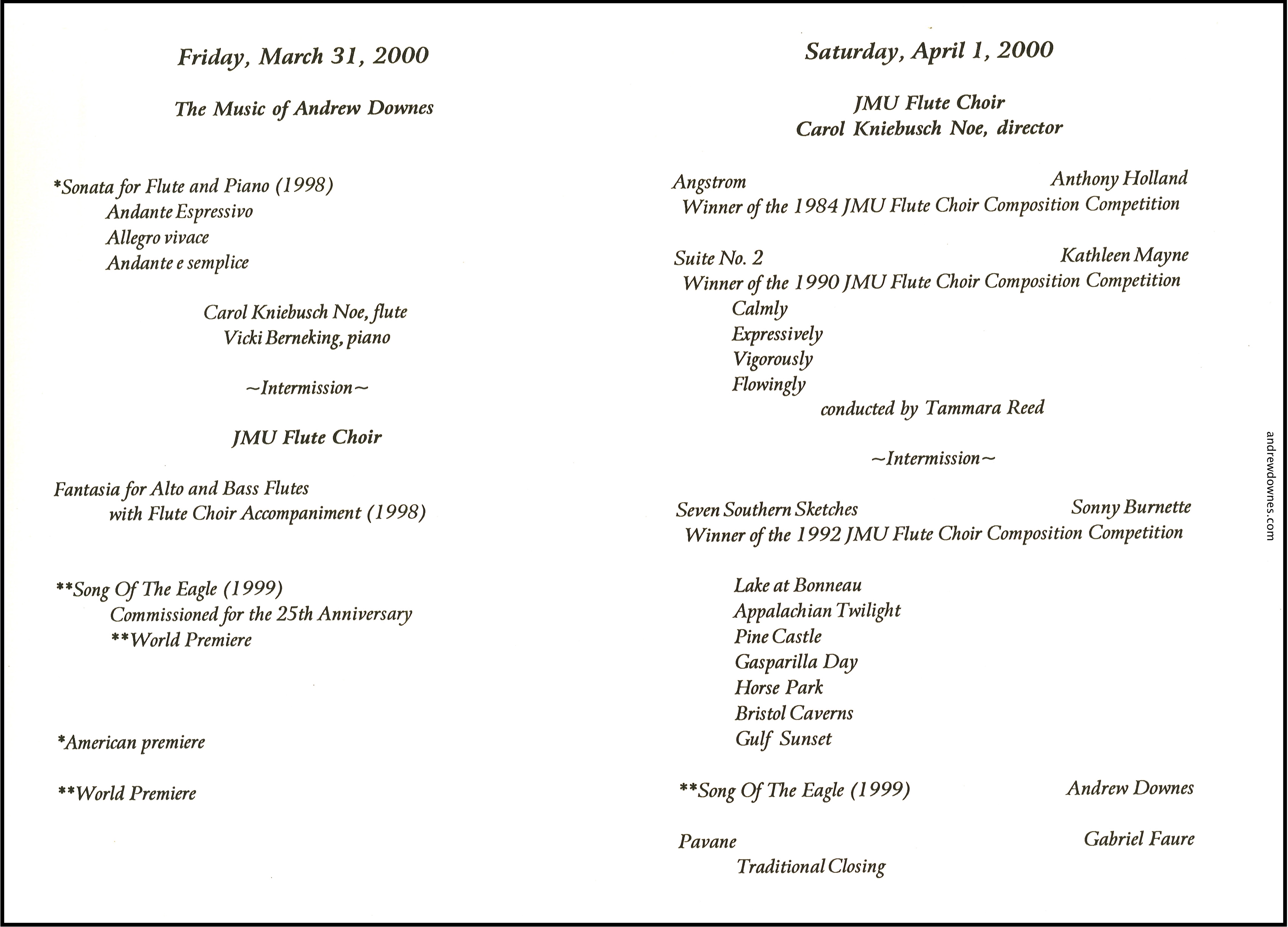 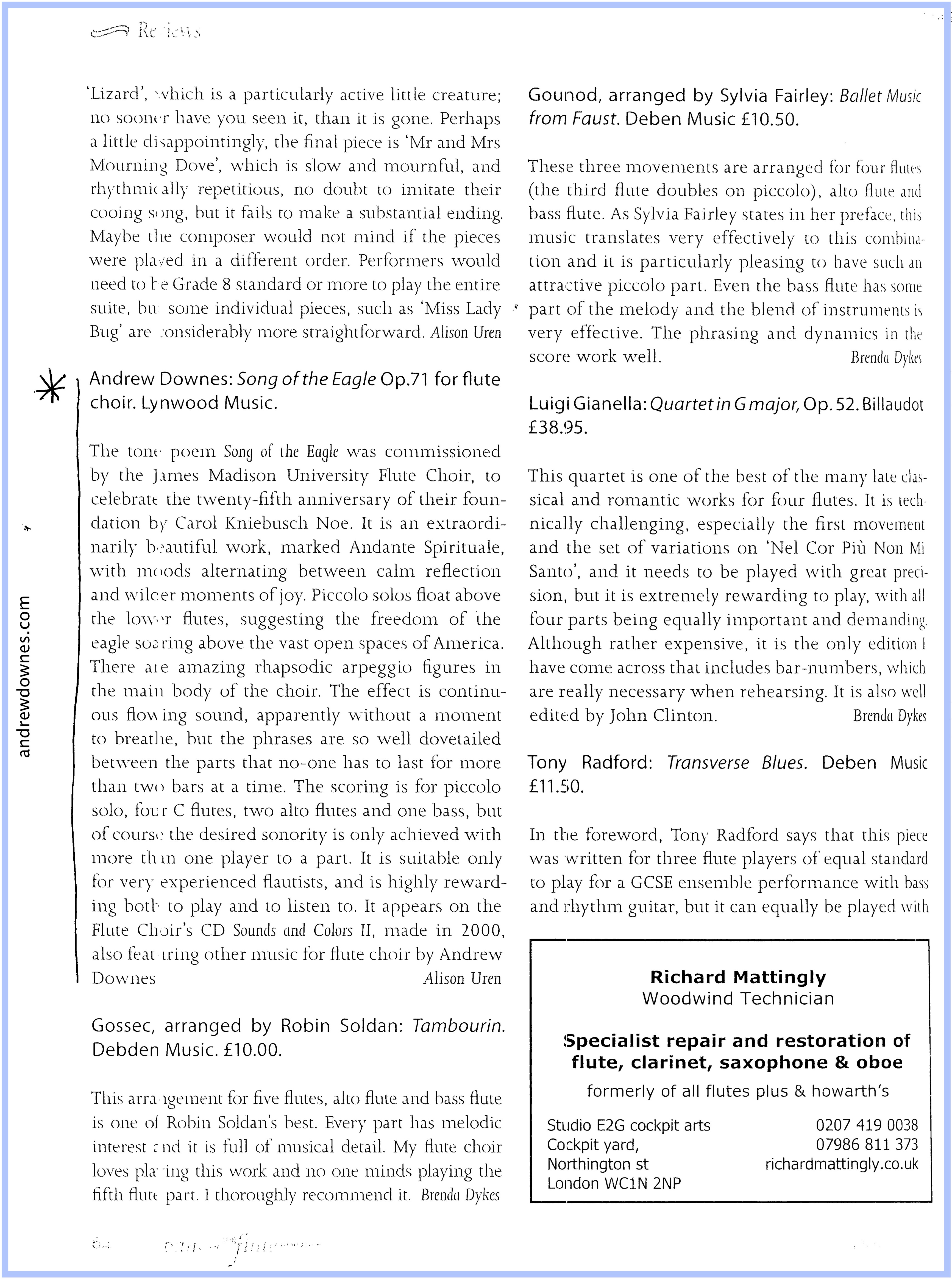 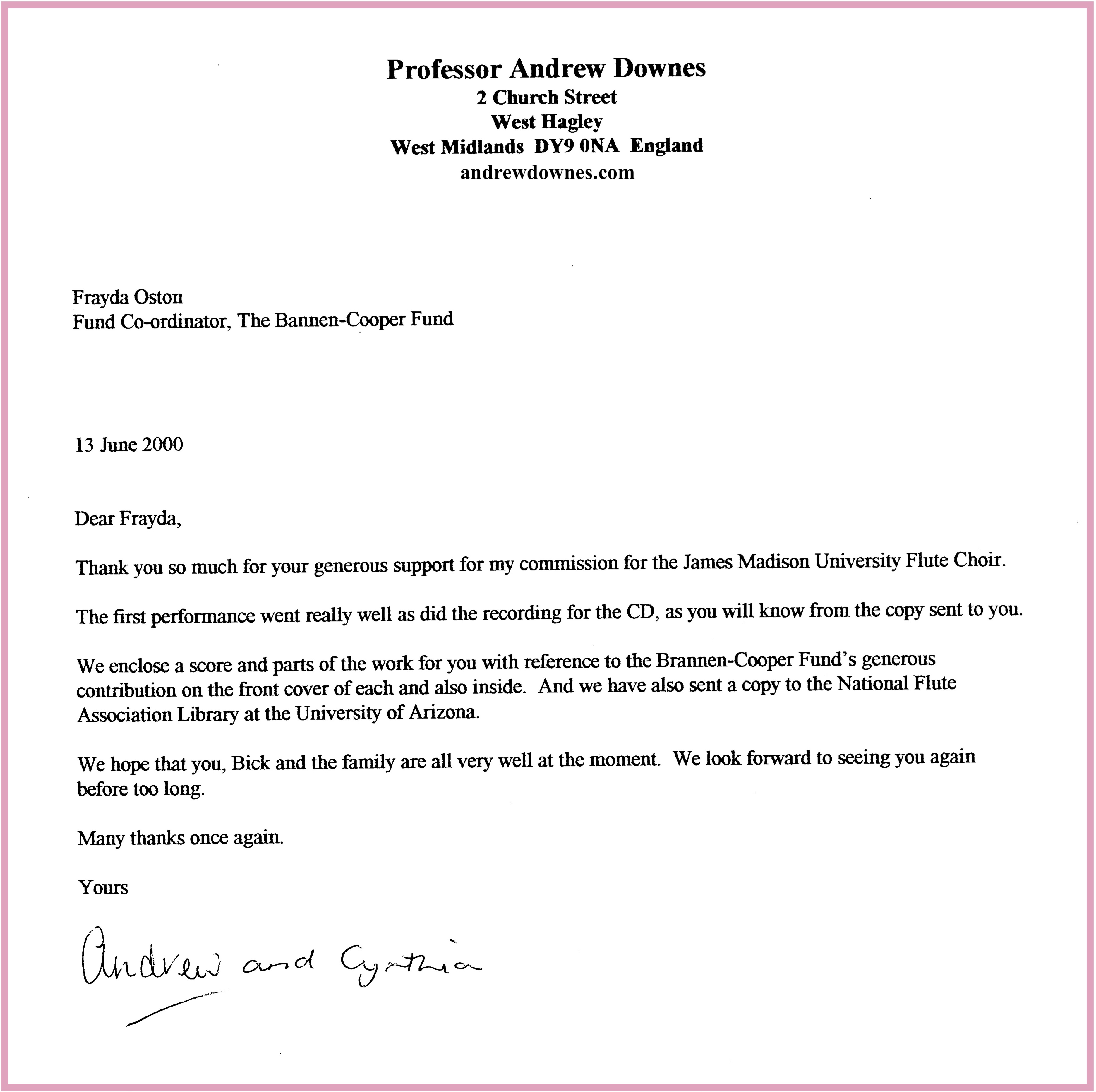 Rehearsal for the premiere: 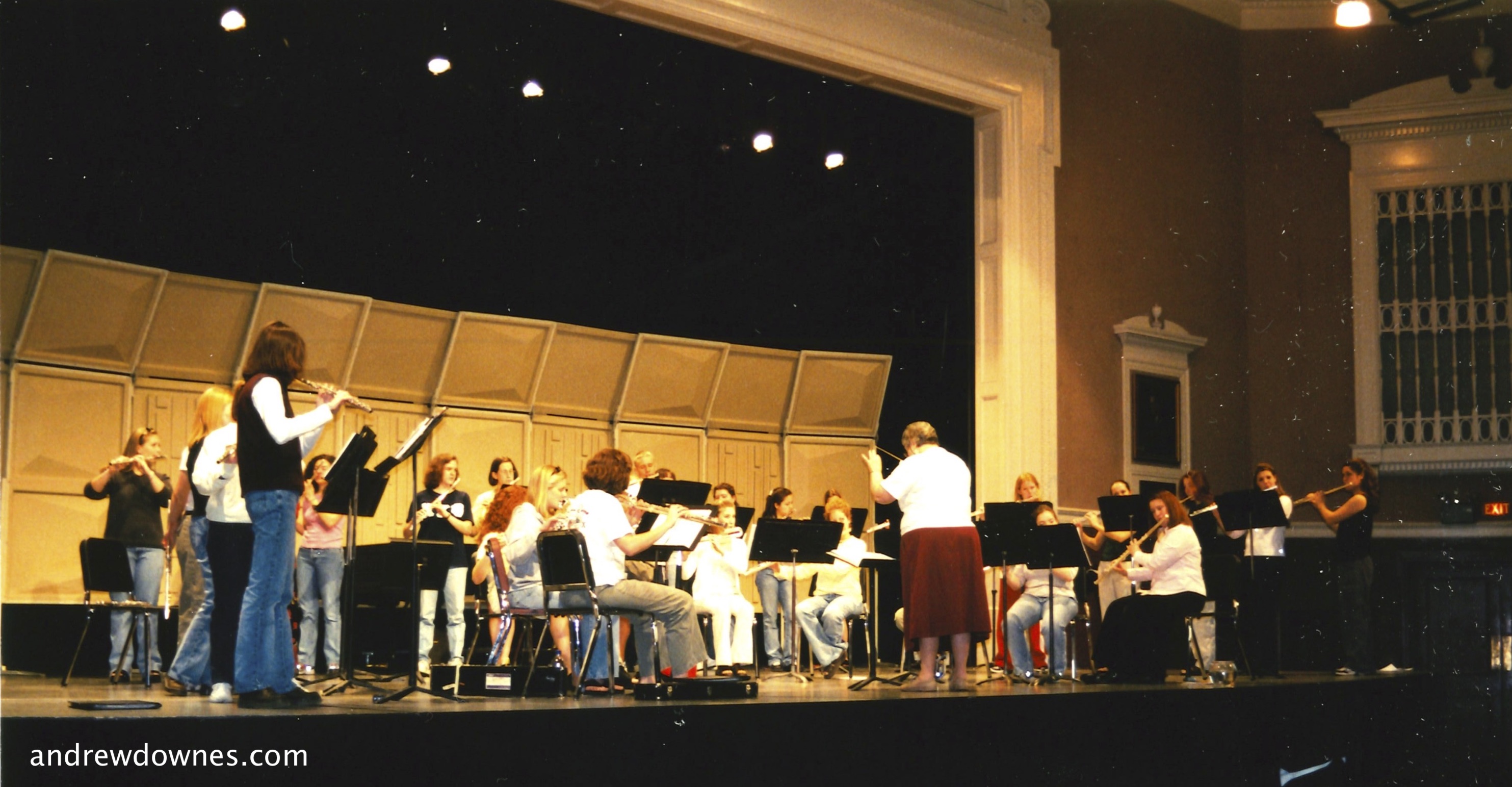 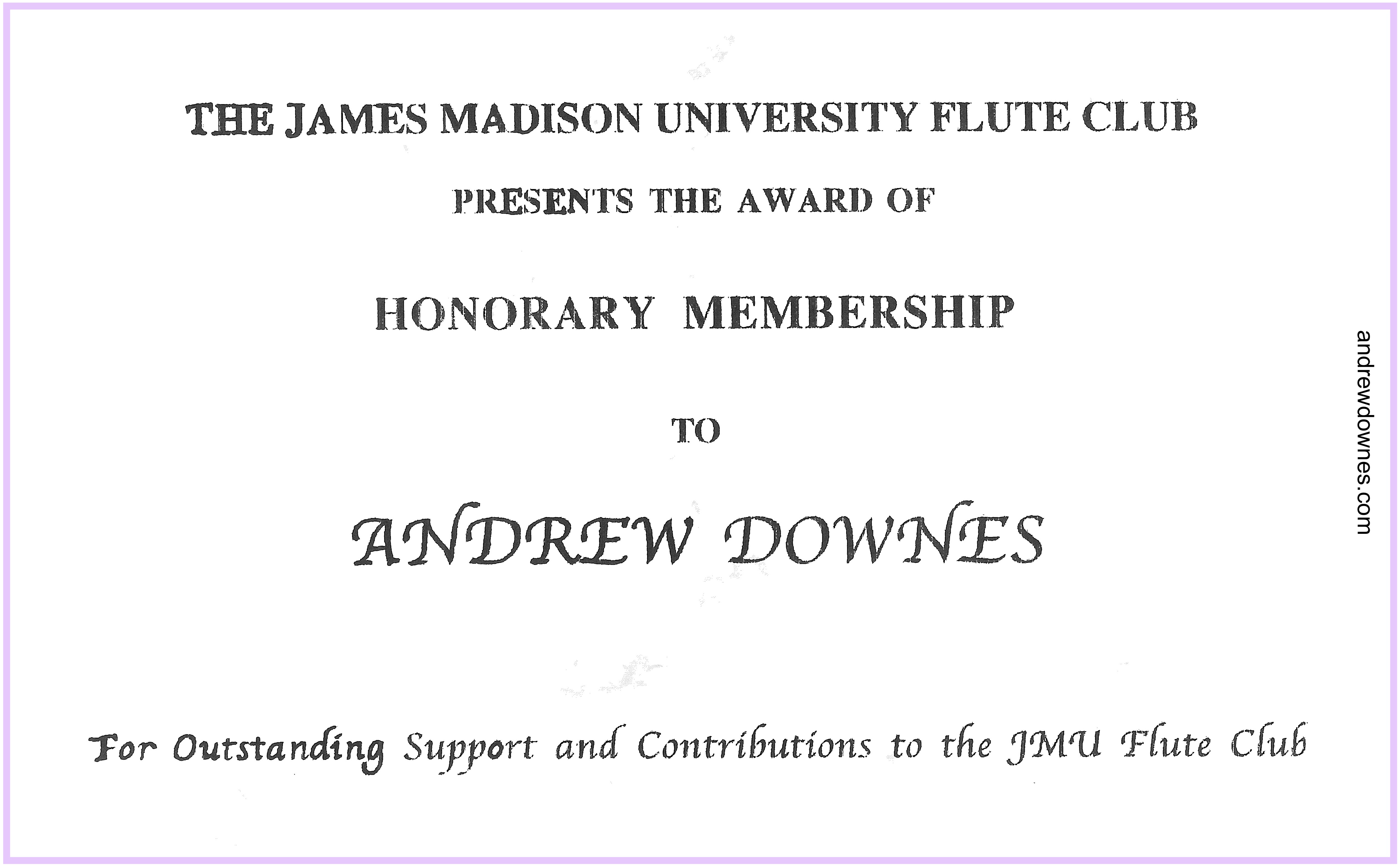 I particularly remember the trip Andrew and I made to Virginia in March 2000 to hear the JMU Flute Choir, directed by Carol Kniebusch Noe, play Andrew's works.  It was springtime in Virginia.  The trees were laden with blossom.  We saw Mennonites for the first time and visited their market, where I bought a tube of their udder cream, a great moisturiser!
The work was subsequently performed at St Paul's Episcopal, Brookline, Massachusetts, in June 2002, by the Massachutts Flute Choir, conducted by Danielle Boudrot. 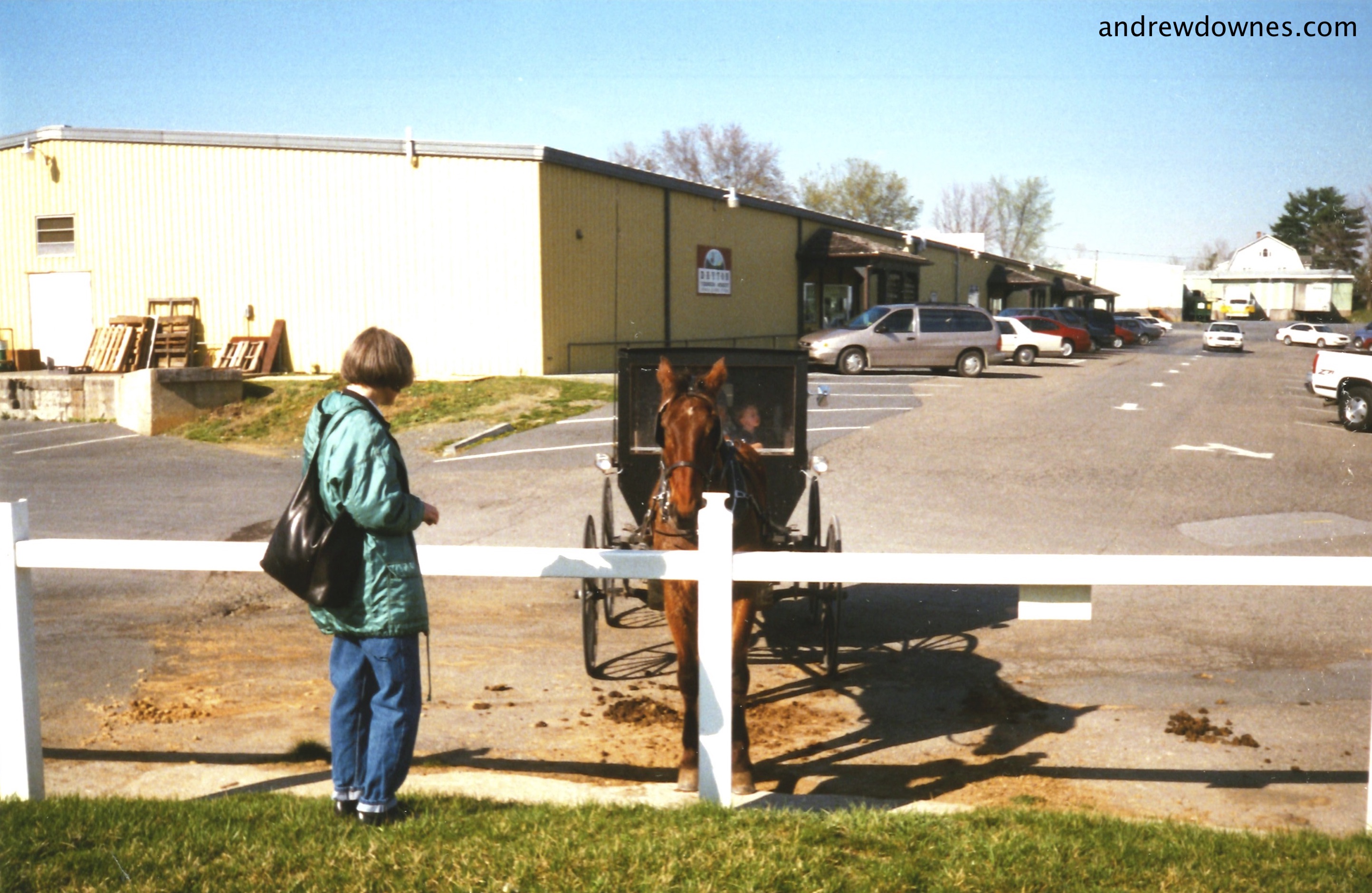 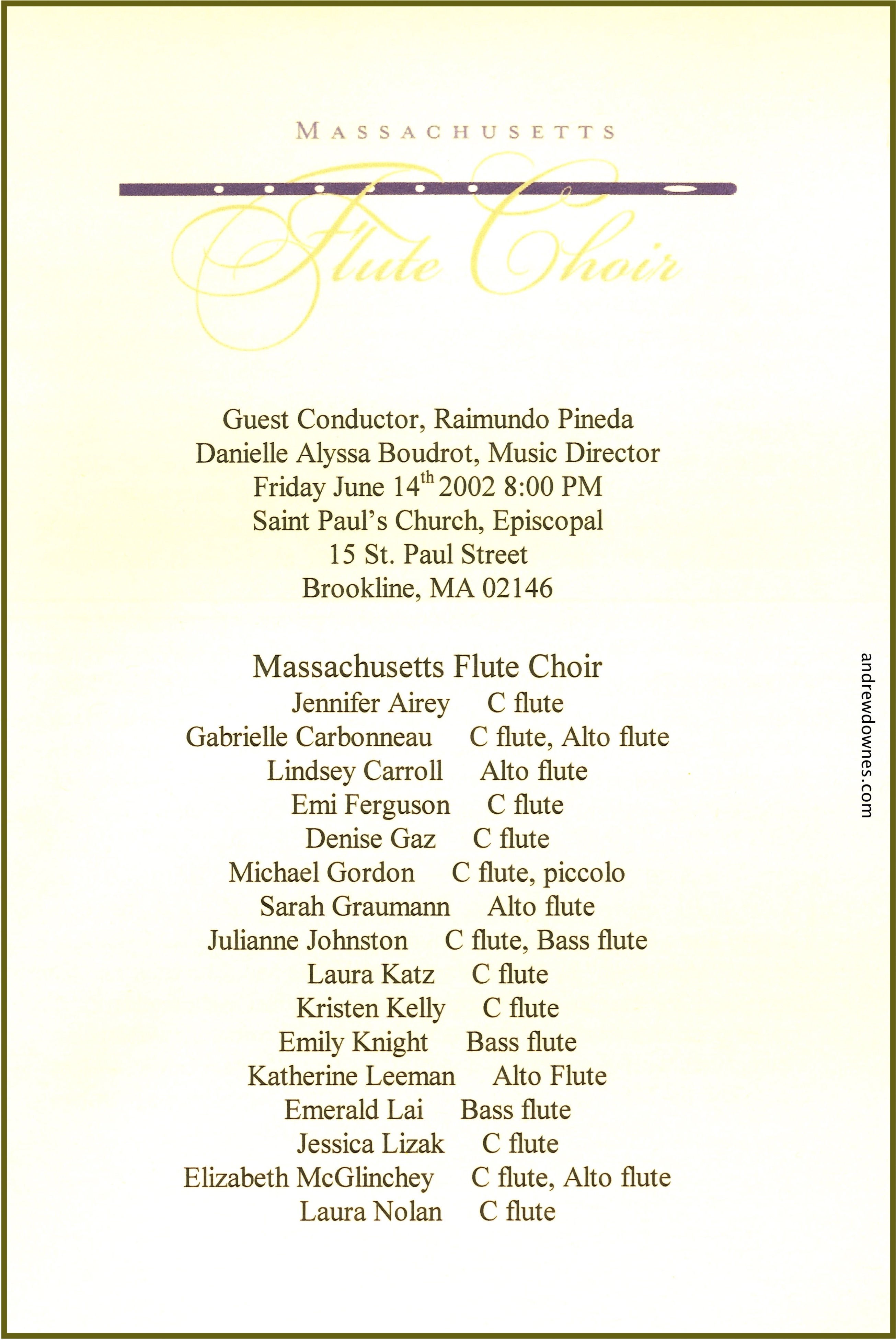 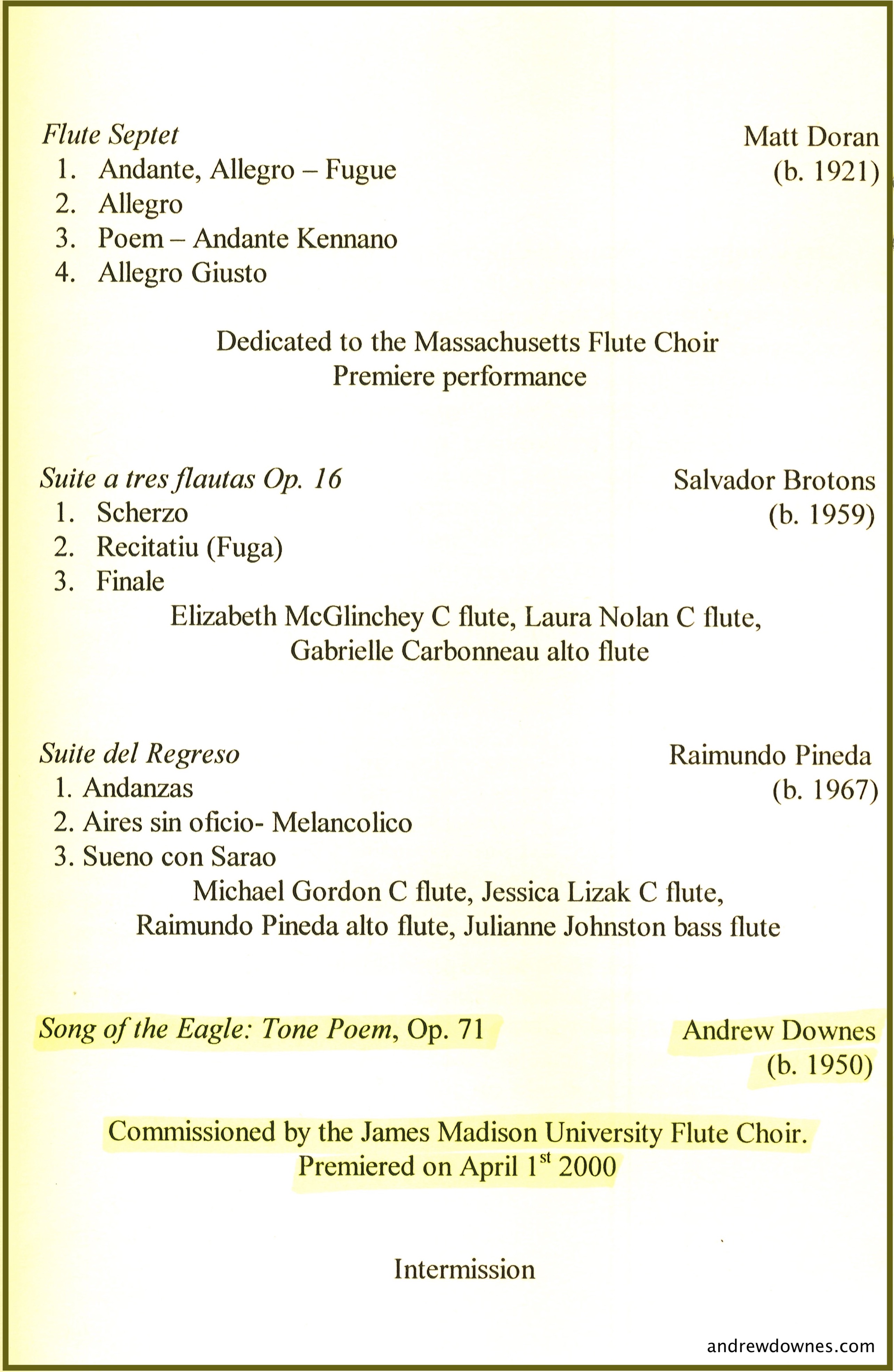 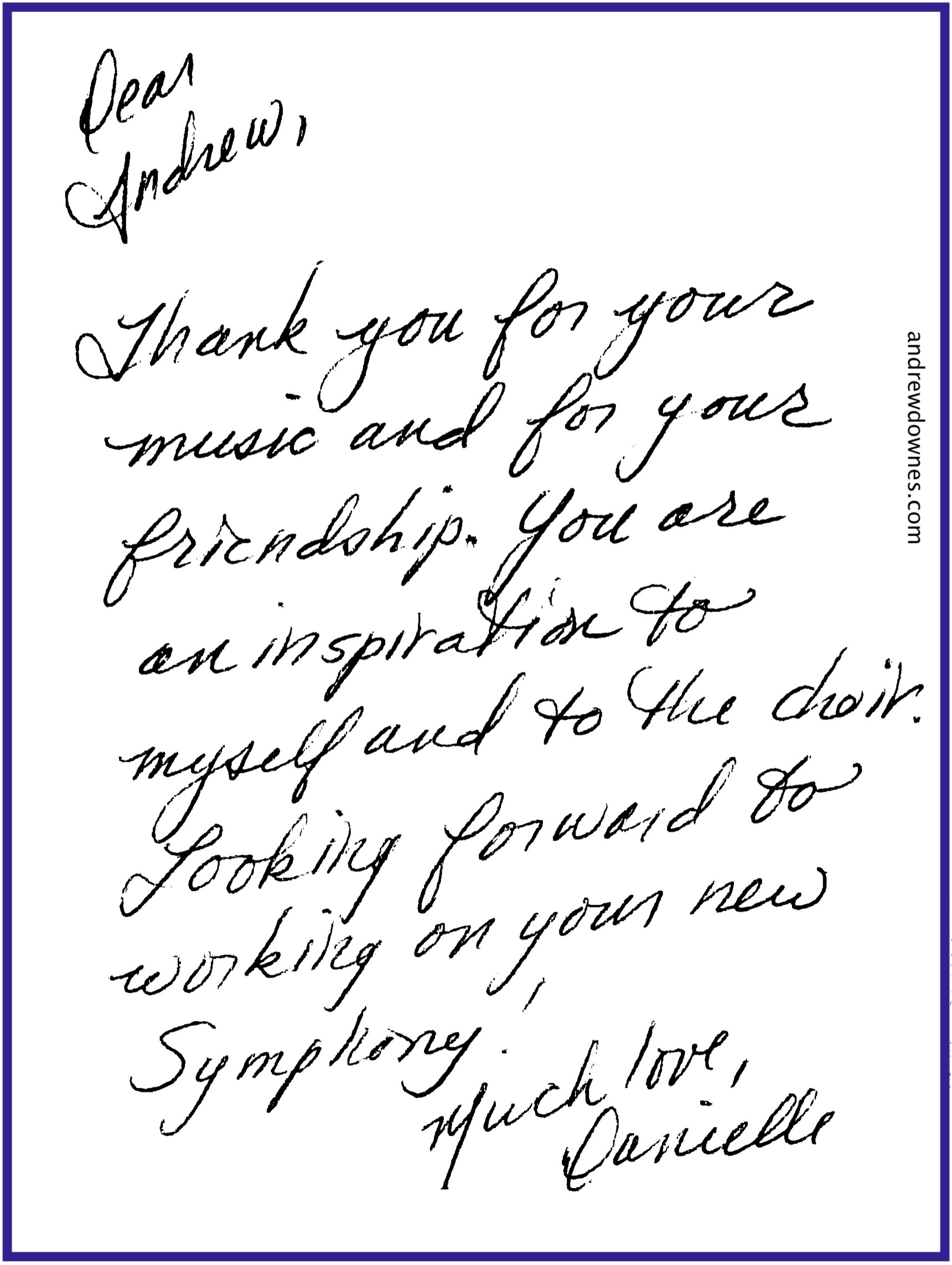 The UK premiere of Song of the Eagle was on Sunday 13th November 2005 as part of the First National Flute Choir Day, organised by Margaret Lowe, in the Adrian Boult Hall, Birmingham. The performance was given by the Birmingham Flute Ensemble with American guests and augmented by students from Millikin University, Illinois, and Birmingham Conservatoire, and was conducted by Carol Kniebusch Noe. 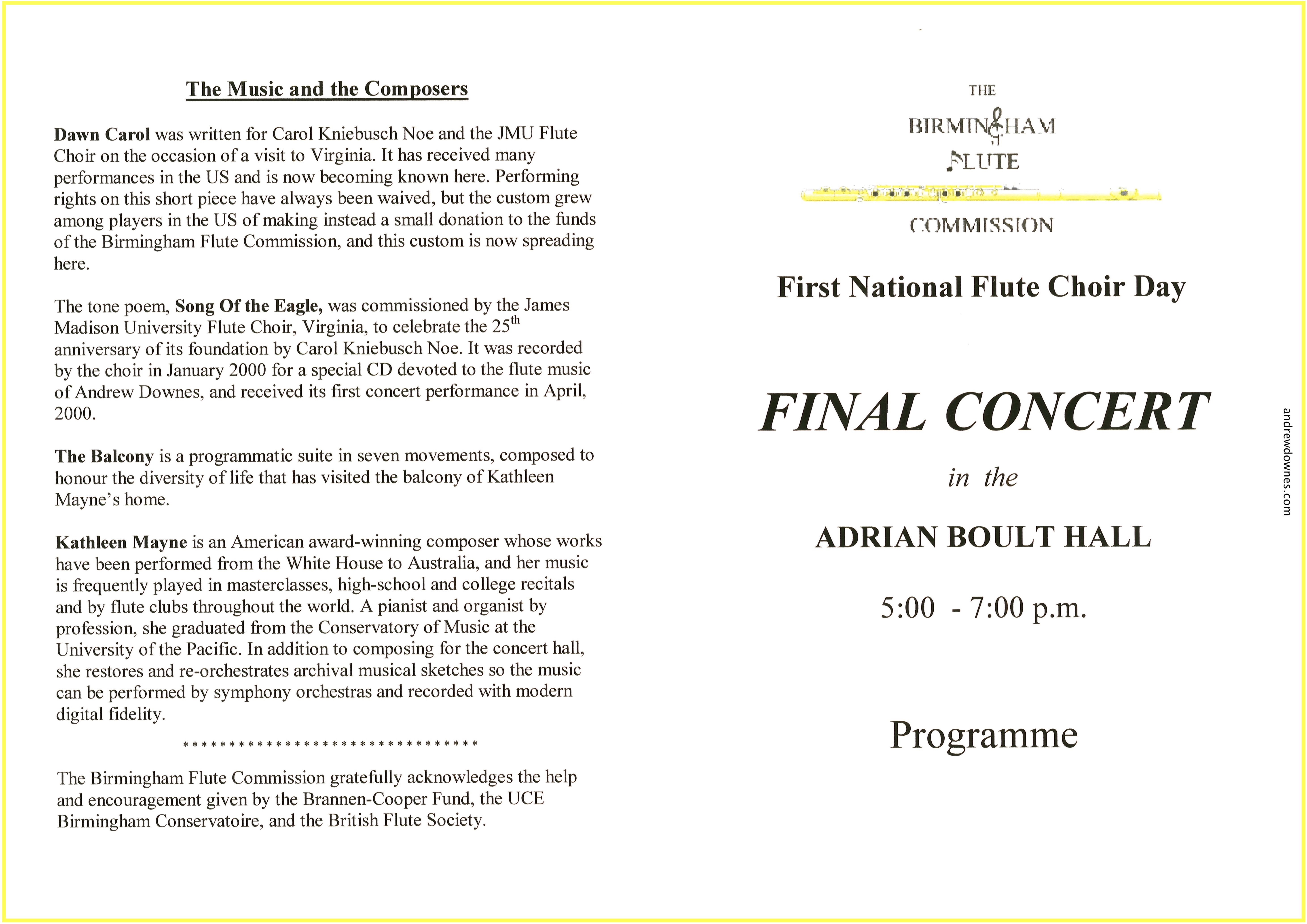 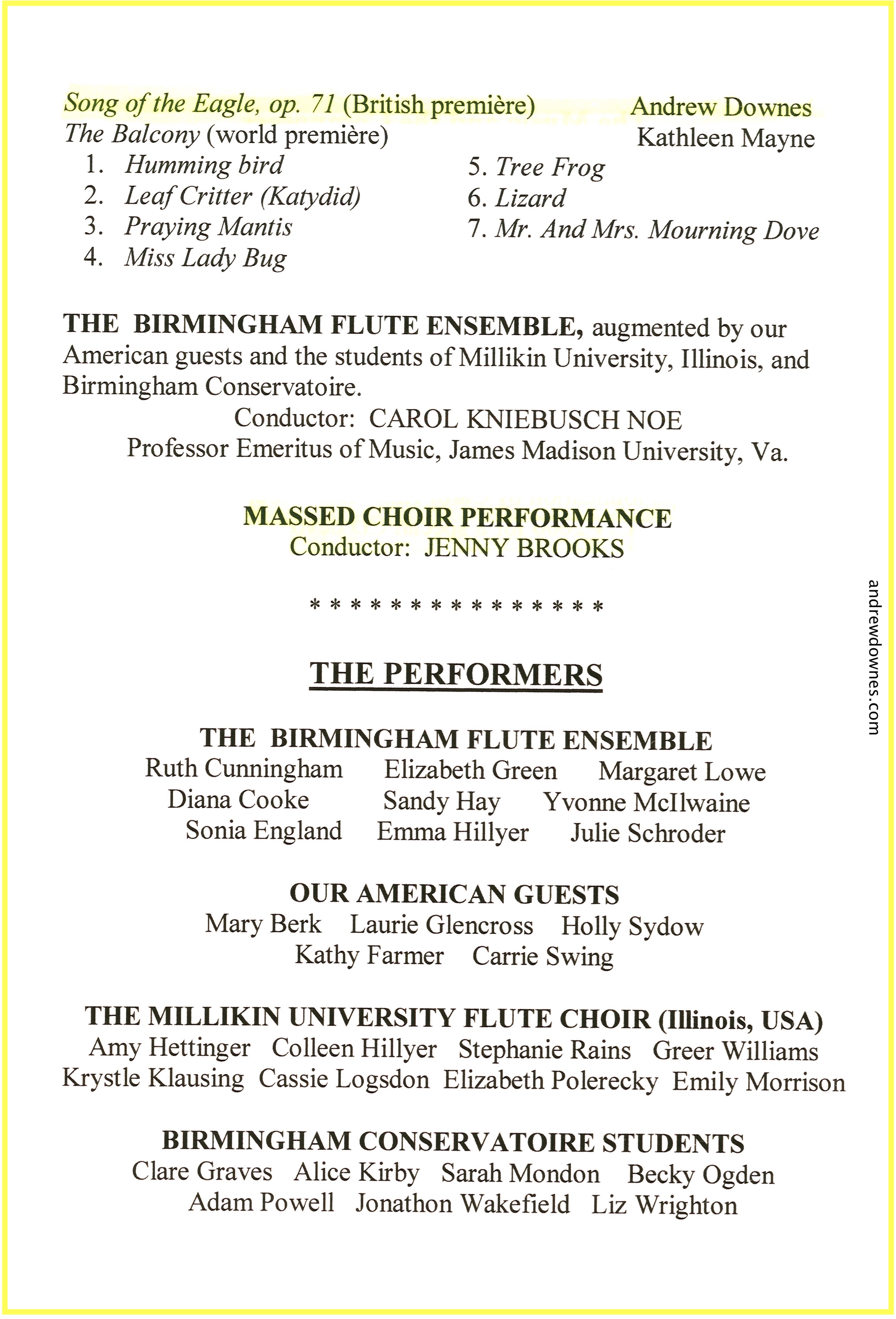 Song of the Eagle was performed at the Convention of the US National Flute Association in New York by the Texas Woman's University/Brookhaven Flute Choir, directed by Pamela Youngblood, in 2009. 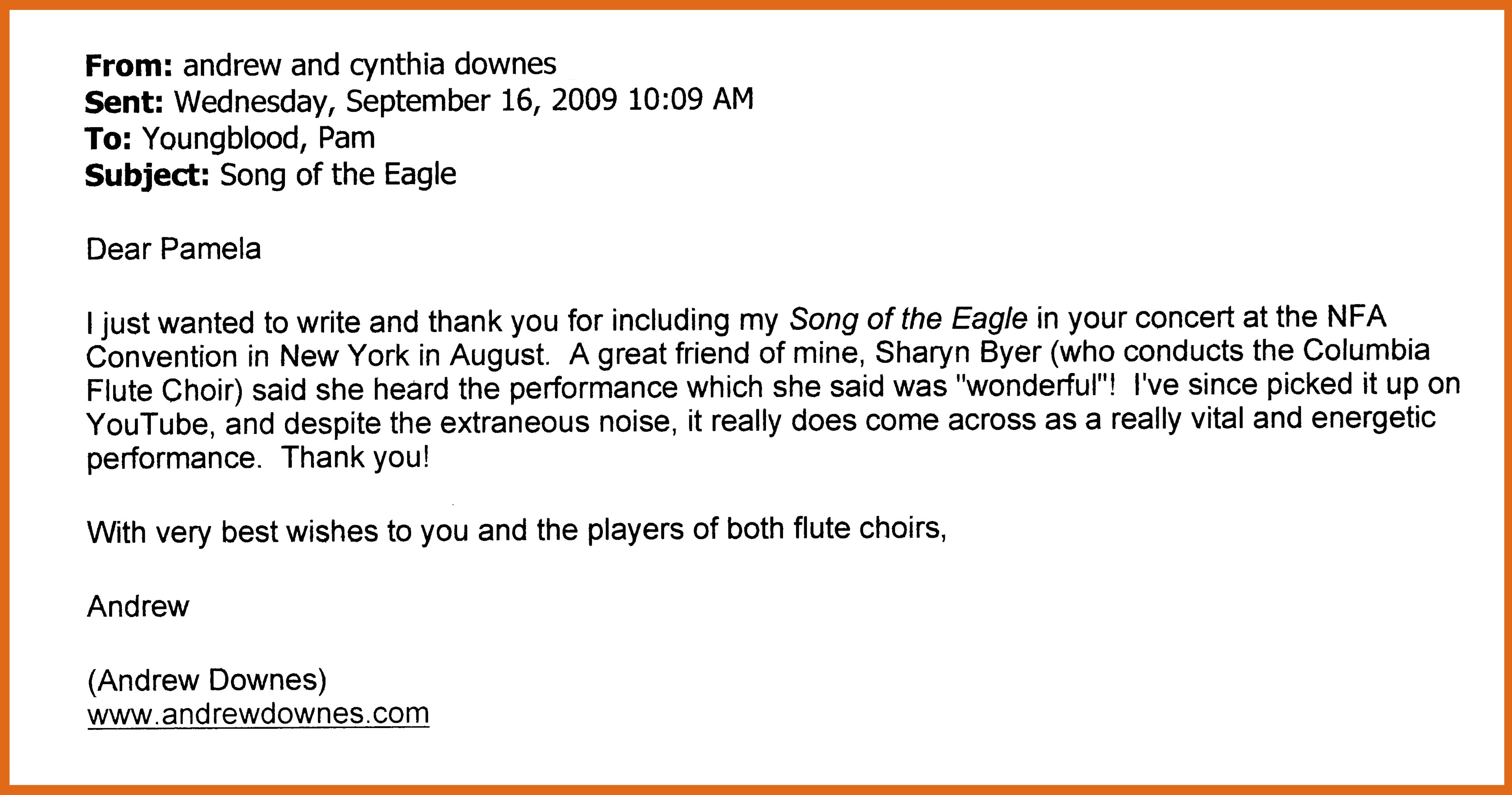 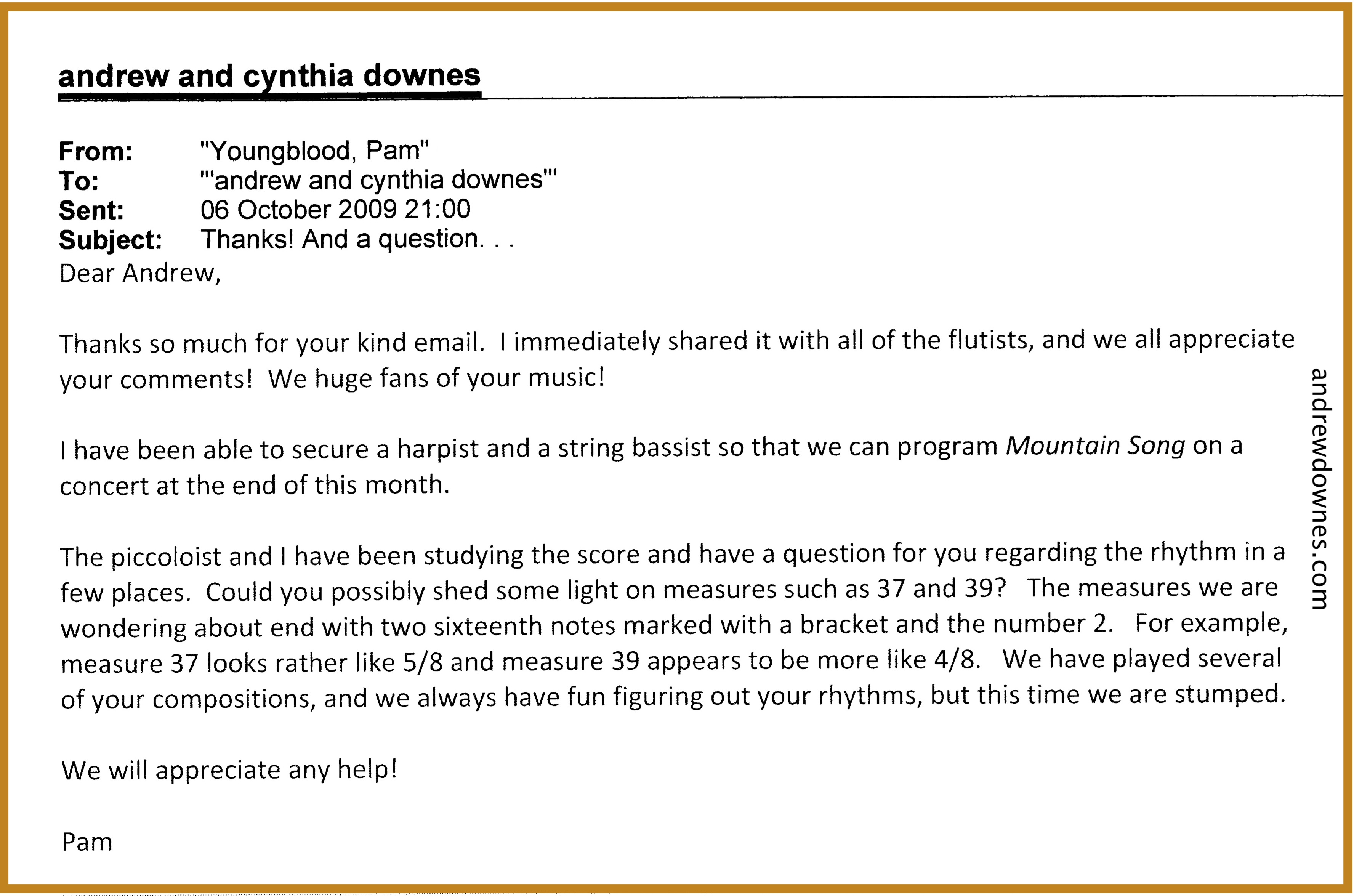 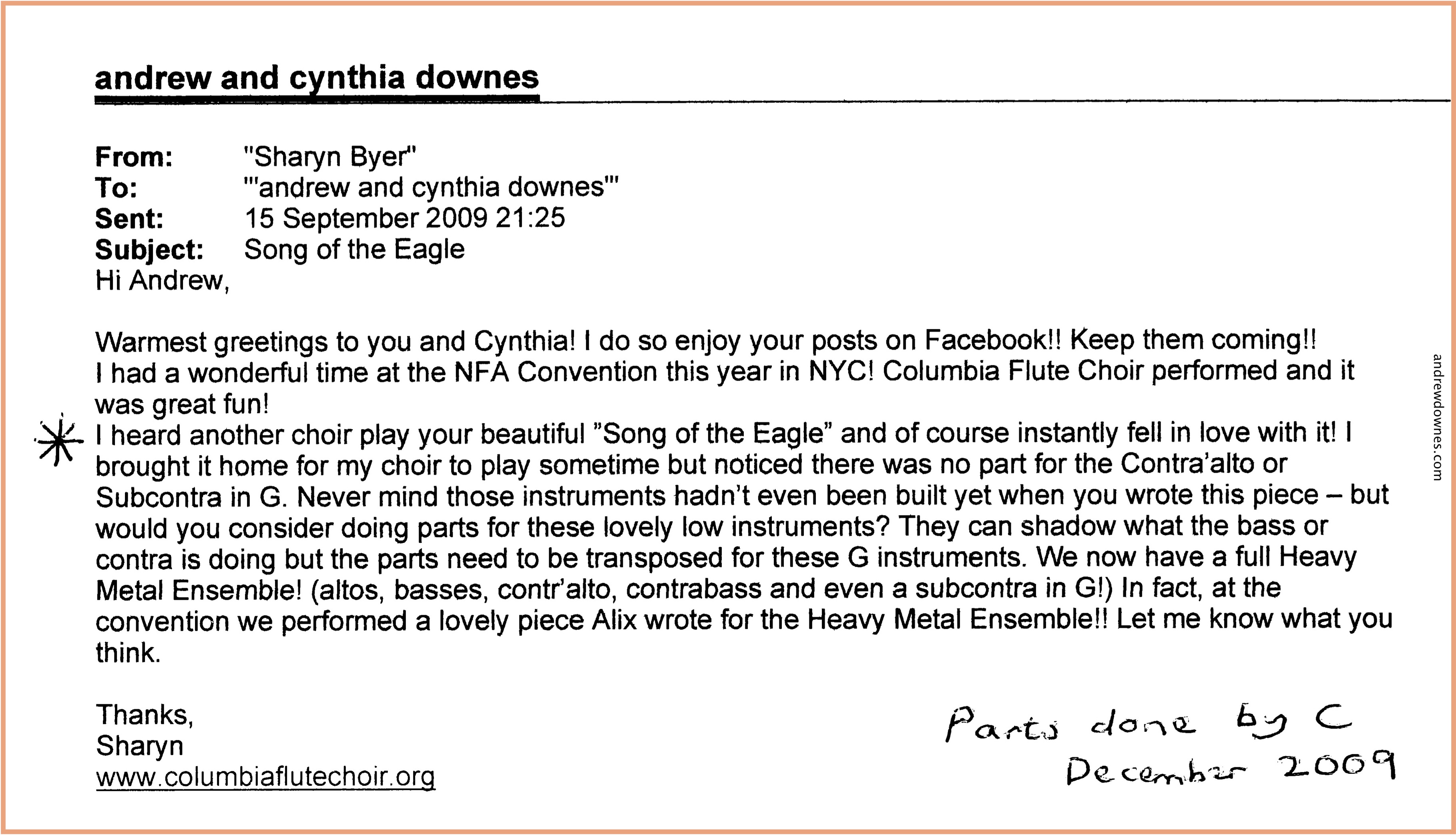 During Andrew’s 70th birthday year the JMU recording of Song of the Eagle was shared online on July 21st 2020.

'It is an extraordinarily beautiful work, with moods alternating between calm reflection and wilder moments of joy.  Piccolo solos float above the lower flutes, suggesting the freedom of the eagle soaring above the vast open spaces of America.  There are amazing rhapsodic arpeggio figures in the main body of the choir, rippling rivers of sound which never seem to end, or leave time to breathe, but the phrases are so well dovetailed between the parts that no-one has to last for more than two bars at a time.'  Alison Uren for 'PAN' MAGAZINE