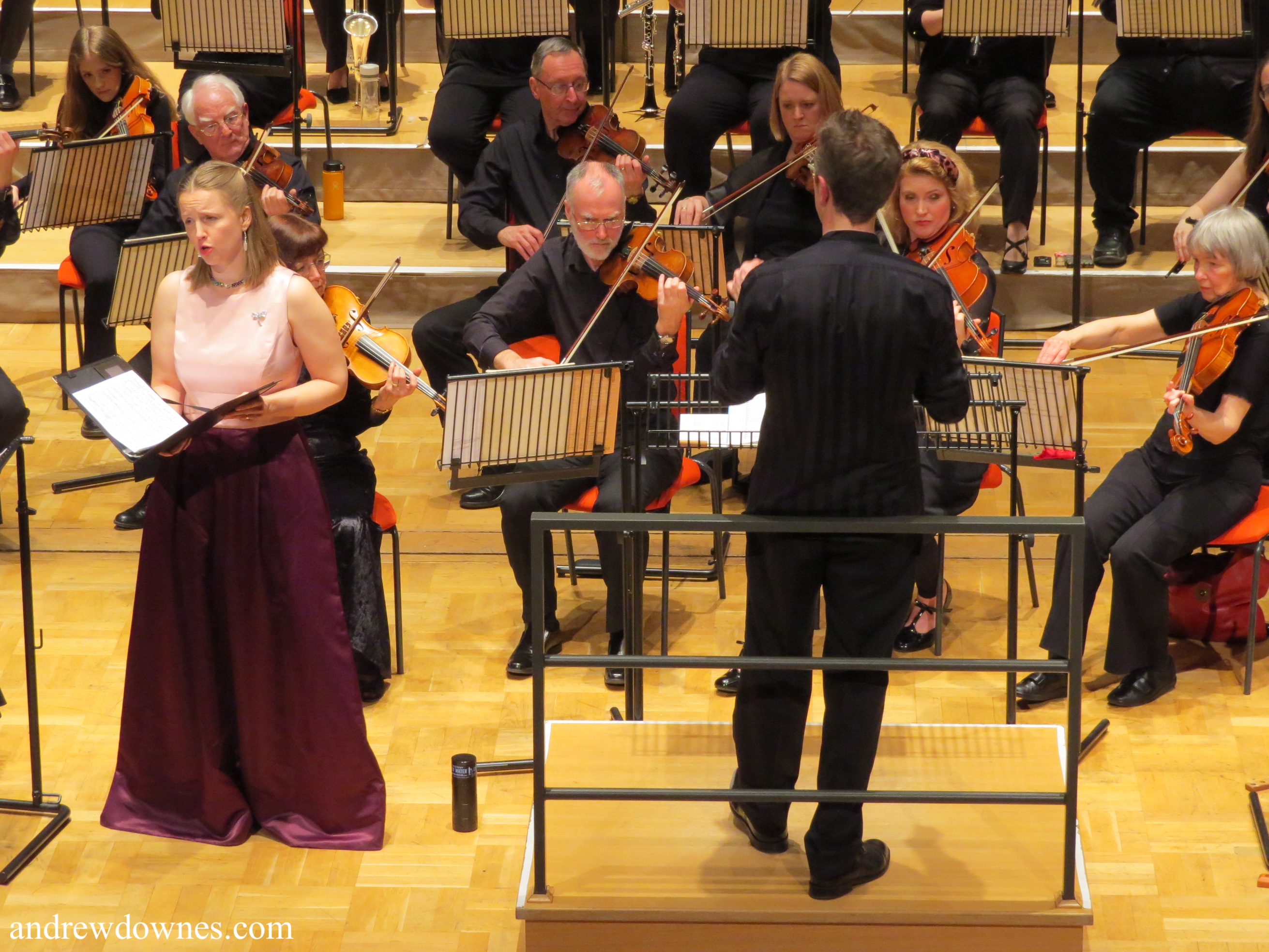 An account by his wife and publisher, Cynthia Downes, posted on May 19th, 2020


On "Song Cycles 1":
Casterbridge Fair - Baritone and Piano
Old Love's Domain - Tenor and Piano (can be sung by Soprano)

Three Celtic Poems: The Land Oversea, poem by unknown author from ancient Irish legend; The Meeting of the Waters by Thomas Moore; and Celtic Twilight by William Butler Yeats - set to music for Soprano Solo and Symphony Orchestra.

This work for Soprano Soloist with Symphony Orchestra was composed by Andrew especially for our daughter, Paula, and for Anthony Bradbury and the Midland Youth Orchestra (led by our daughter, Anna), who gave the first, very memorable performance on 8th March 2003 in the Adrian Boult Hall, Birmingham.

'That an internationally recognised composer should wish to write a work as a present for his local youth orchestra is indeed an astonishing and deeply gratifying gesture... In fact the connections between the Downes family and the MYO go back to the very beginnings of this orchestra... Frank Downes, father of Andrew.. was the inspiration behind many of the MYO's early horn sections... Frank..taught horn-playing to so many of those players covering, perhaps, the first 20 years of the orchestra's history... Then, some 4 decades later, Frank's two granddaughters Paula and Anna both became violinists in the MYO. Each has had the opportunity to be leader of the orchestra, both very much on merit, and Anna (the current leader) has also been able to make an invaluable contribution to the health and well-being of the orchestra behind the scenes... Andrew, father of Anna and Paula, has been moved to give to the orchestra still more by composing Celtic Rhapsody for Soprano and Orchestra specially for it. His Celtic Rhapsody now links three generations of the Downes family to the Midland Youth Orchestra... It will be a great honour for all involved this evening that, with Paula, the orchestra will bring its own work to life for the very first time. Andrew, on behalf of the MYO, I give you my heartfelt thanks.' - Programme tribute from Stephen Williams, Chairman of the Midland Youth Orchestra. 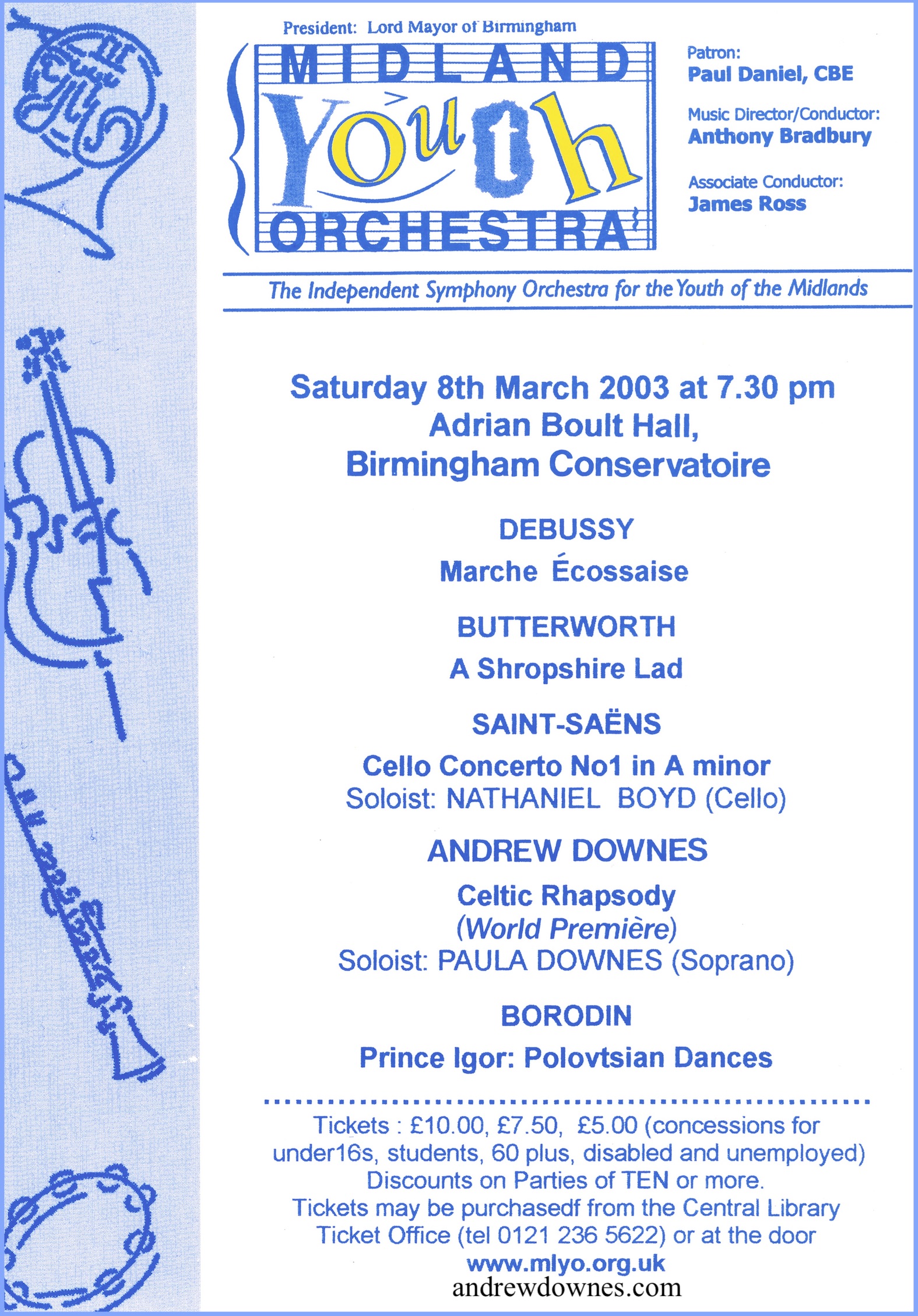 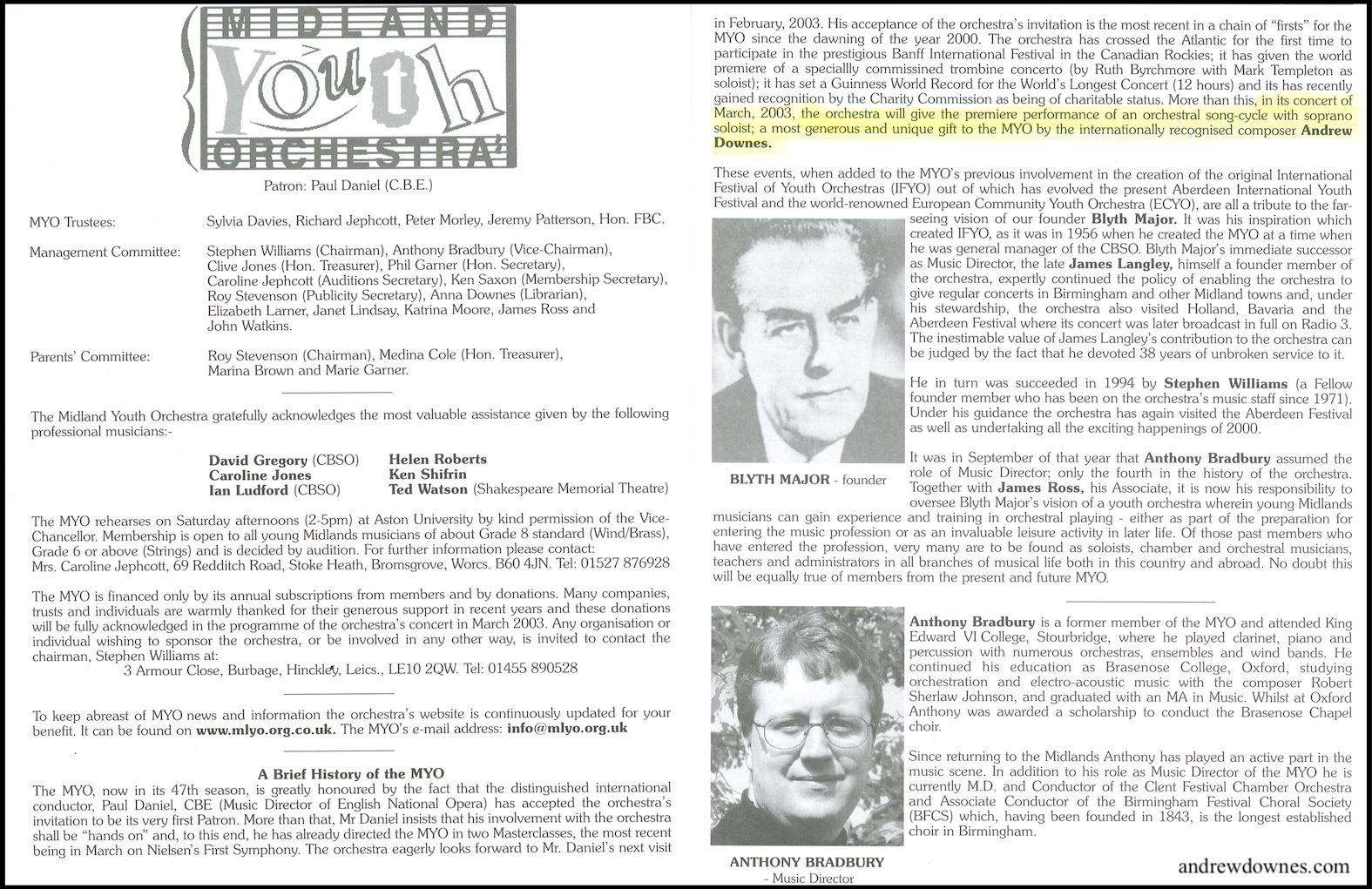 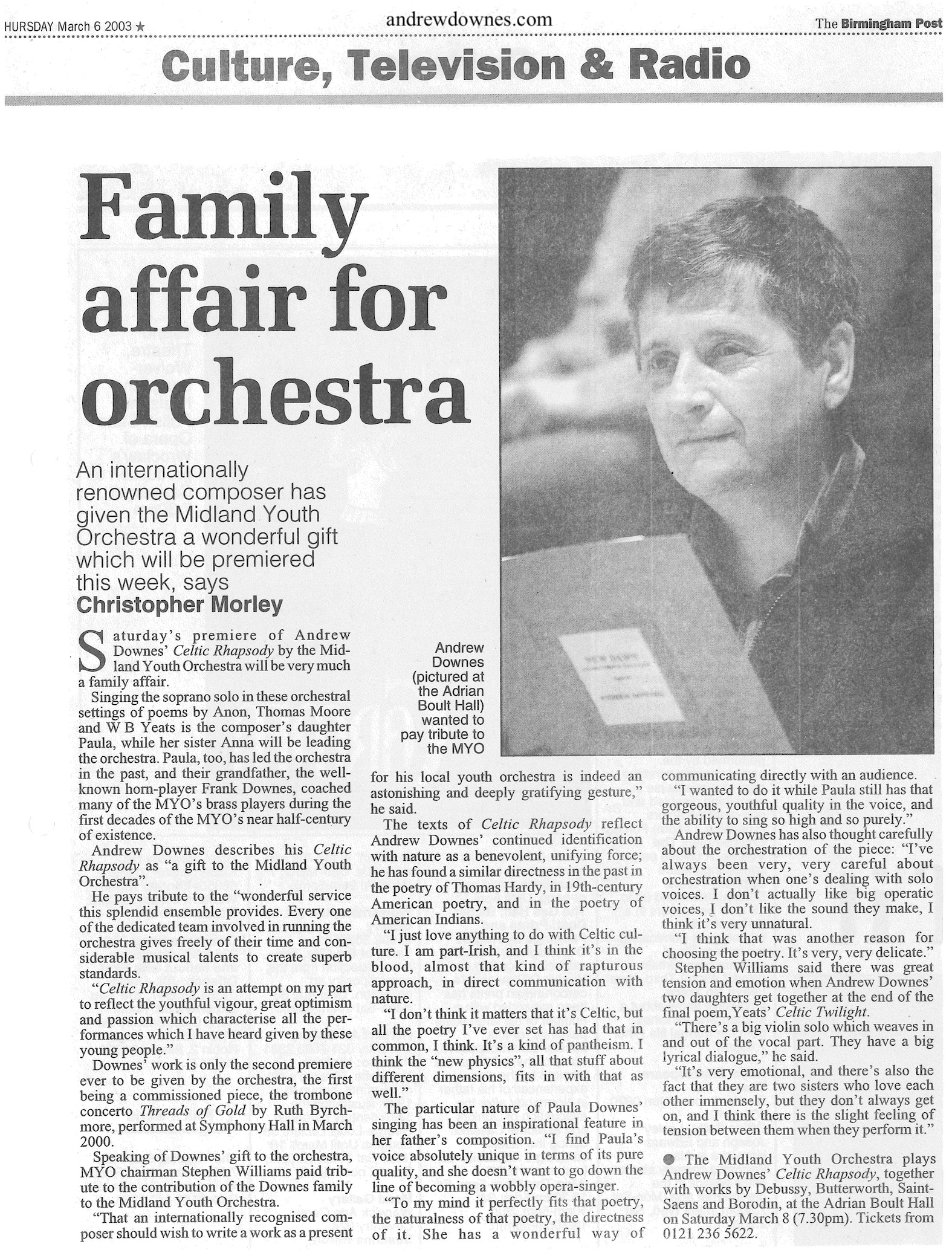 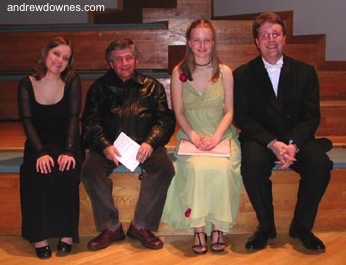 A thrilling review appeared in the Birmingham Post next day:

'Gaelic culture..., pastoralism... and fairy tales... were given an engaging reworking in Saturday's premiere of Andrew Downes' Celtic Rhapsody. Musically, the Celtic influence was most obvious in the high, sustained soprano lines of the three poem settings. Written for the composer's daughter, soloist Paula Downes, the cool beauty of her voice projected the atmospheric phrases... true and clear against the accompaniment. Authoritatively conducted by Anthony Bradbury, a generally confident orchestra was at its best in the first song (a simple, eloquent cello opening and arresting juxtapositions of lyricism with rollicking motifs) and the third's rousing close. This was preceded by a poignant duet which skilfully set Paula's pure timbres against the warm, moving violin playing of her sister (and MYO leader), Anna.' 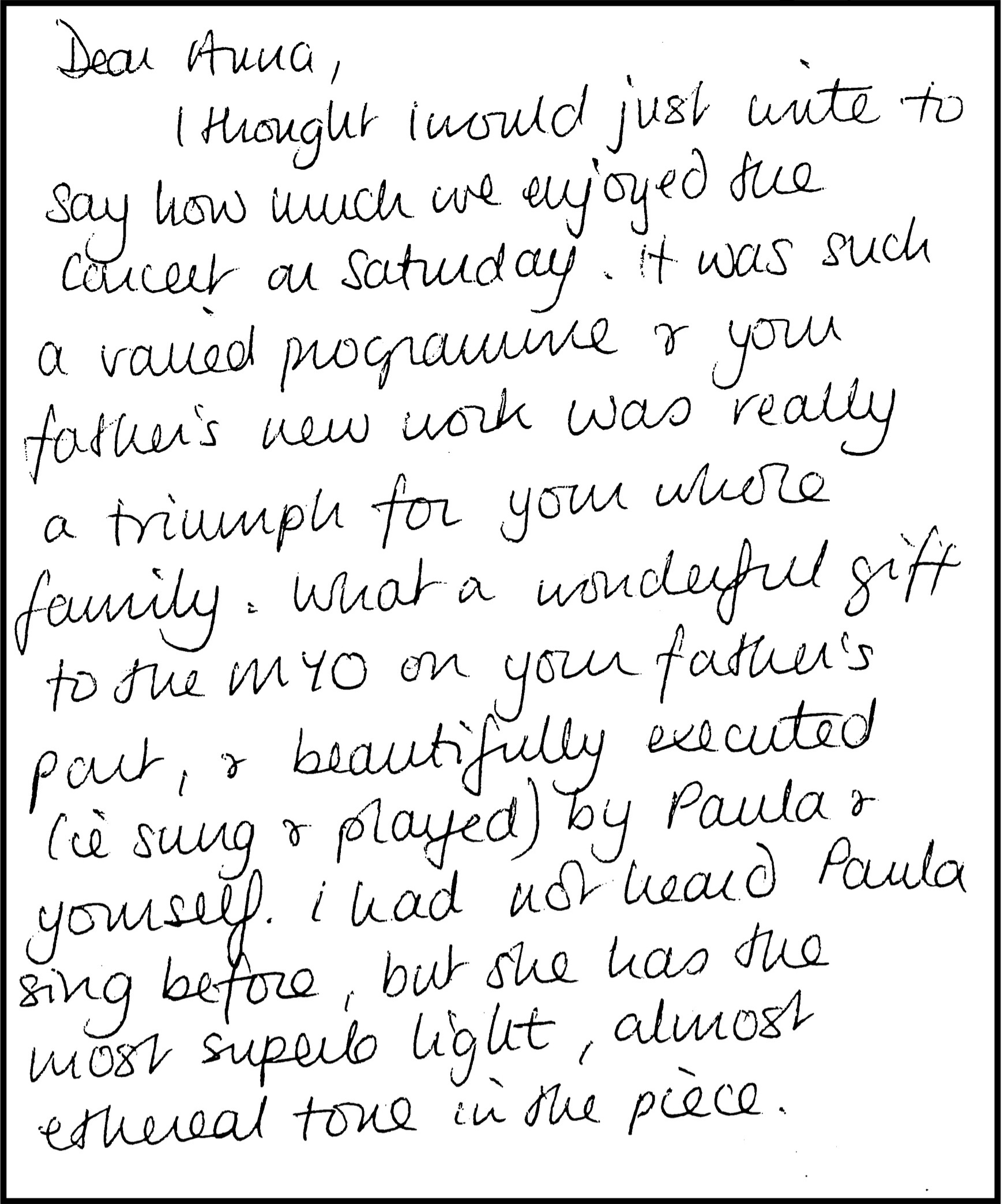 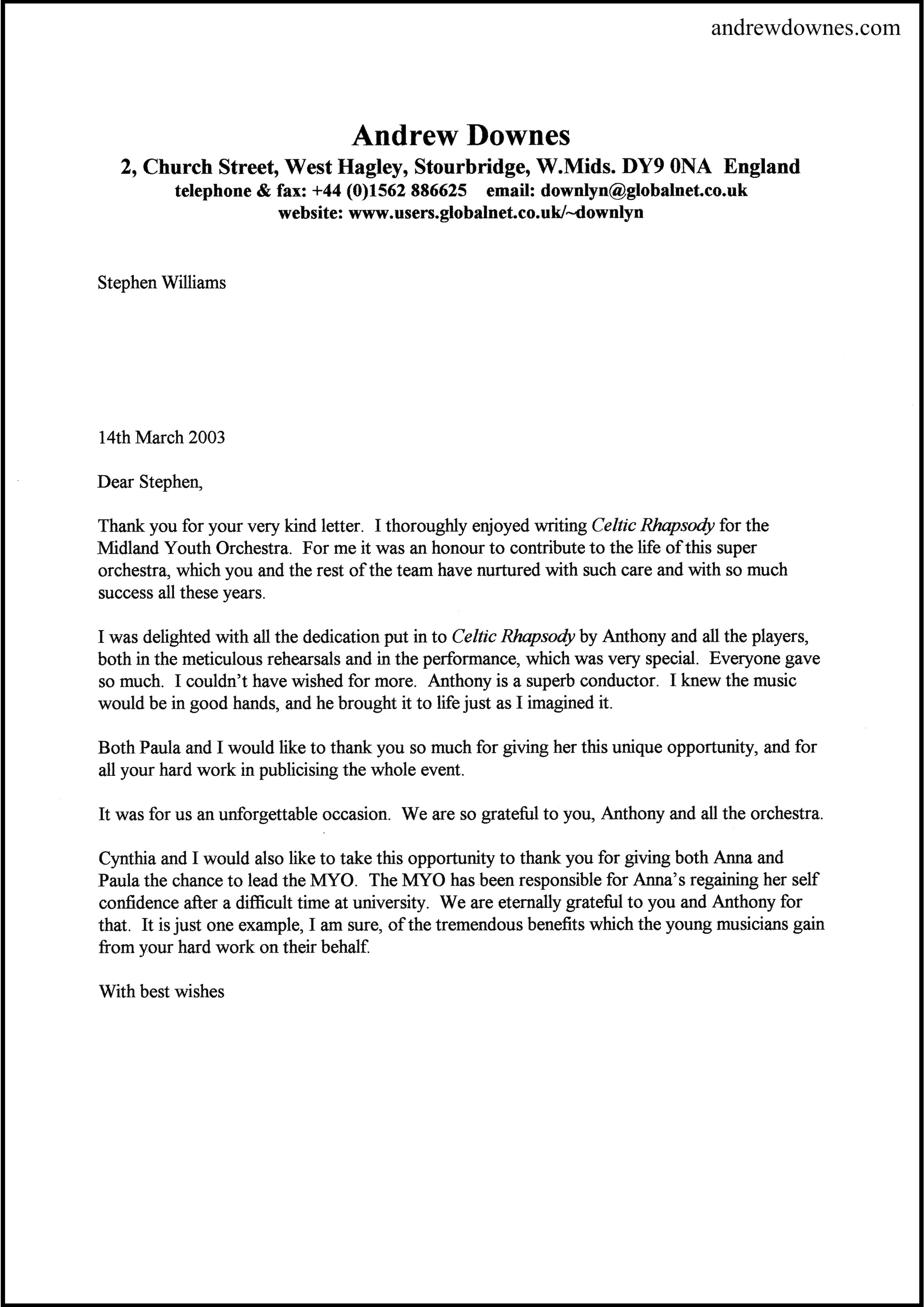 In March 2005 our daughter Anna organised an orchestral trip to Germany for her Central England Ensemble (which she had founded in 2001 inviting newly professional players and extremely talented amateurs to take part).  I was delighted to play in the orchestra and we gave performances of Celtic Rhapsody in Bremen, Bremerhaven and Cuxhaven, North Germany, with Paula singing the soprano solos, Anna leading and Anthony Bradbury conducting. I compiled our programme and publicity and translated everything into German, with a bit of help from German composer, Andreas Salm.  We had great fun on this trip. The Orchestra was full of big and witty personalities.  We laughed through the long coach journeys and gave our all in the performances, which were very successful, as described by the North German press:-

'The solo part of the Celtic Rhapsody...proved to be...perfectly tailor made.  Paula Downes...led with clear vocal projection and immaculate intonation into a moving bygone world of poetry.  The orchestra accompanied as one the gentle melismas.'  NORDSEE-ZEITUNG 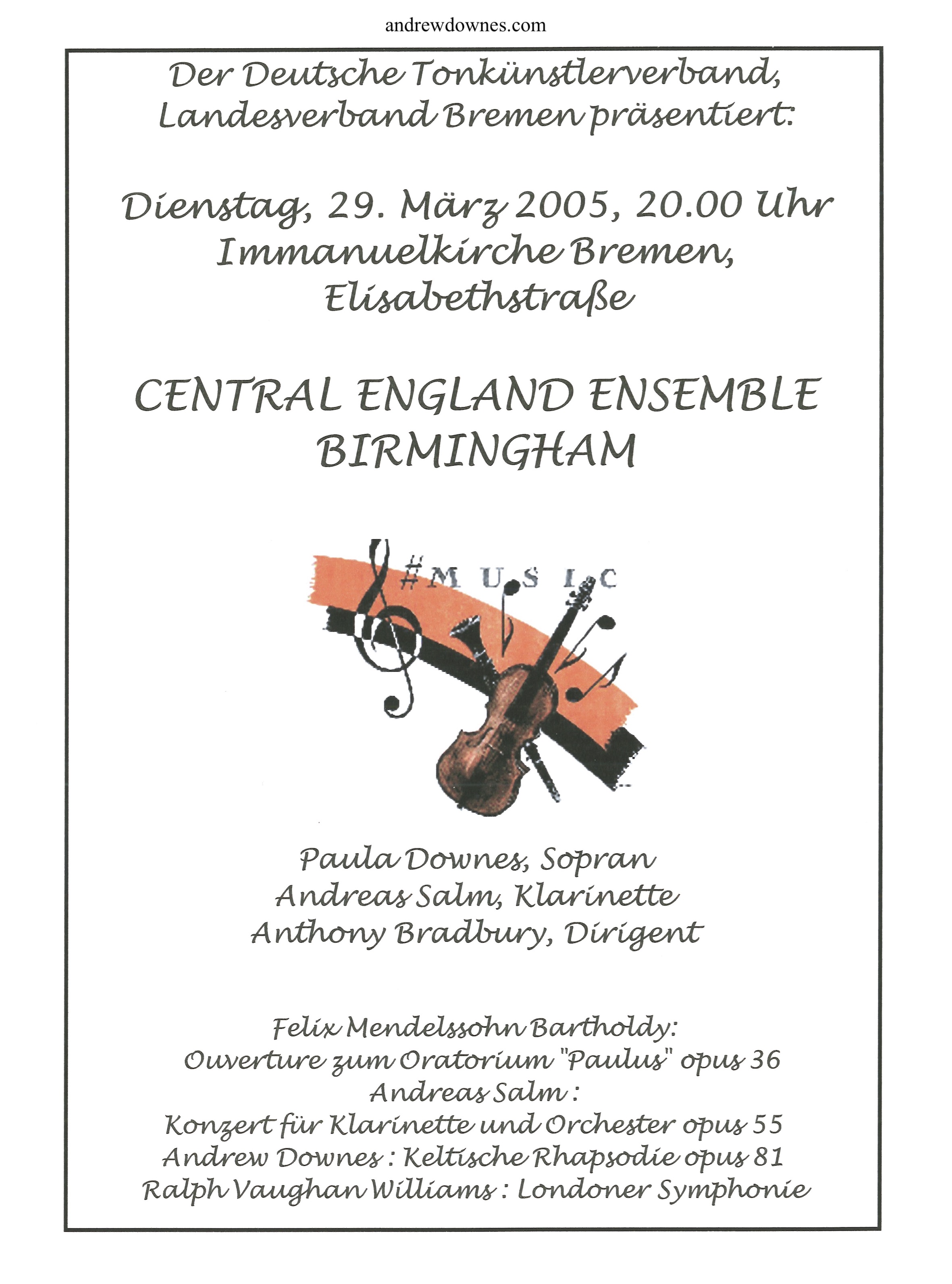 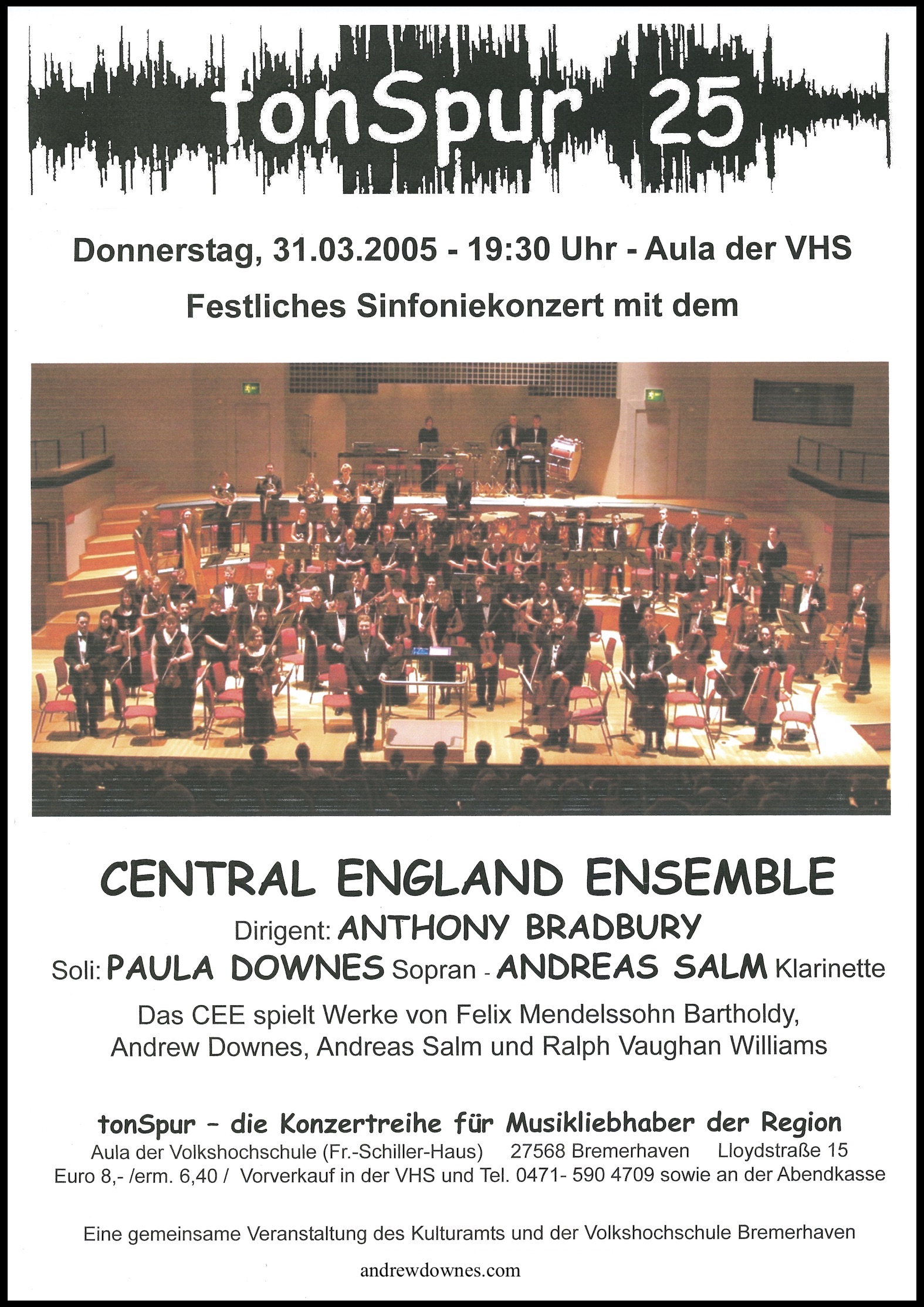 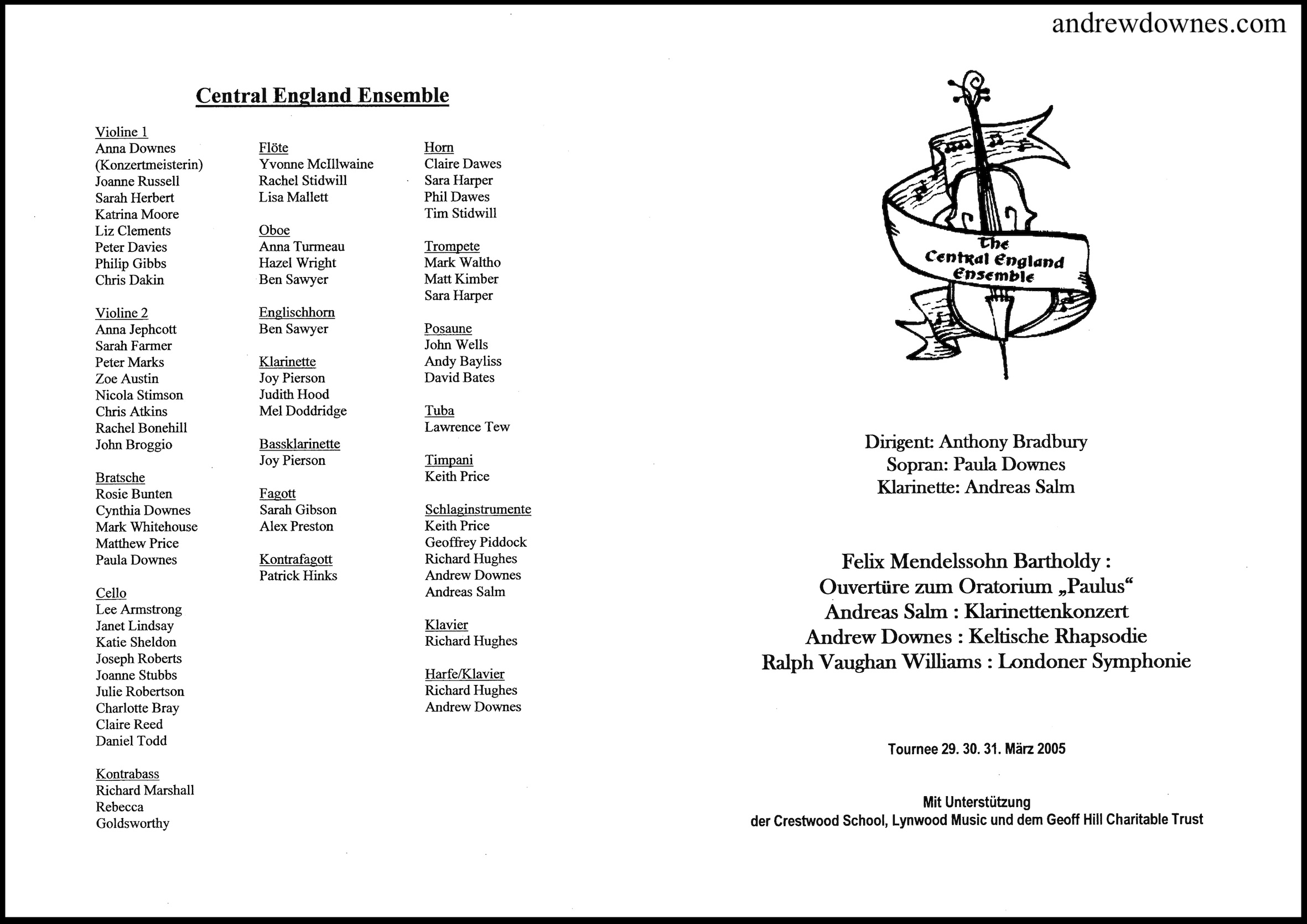 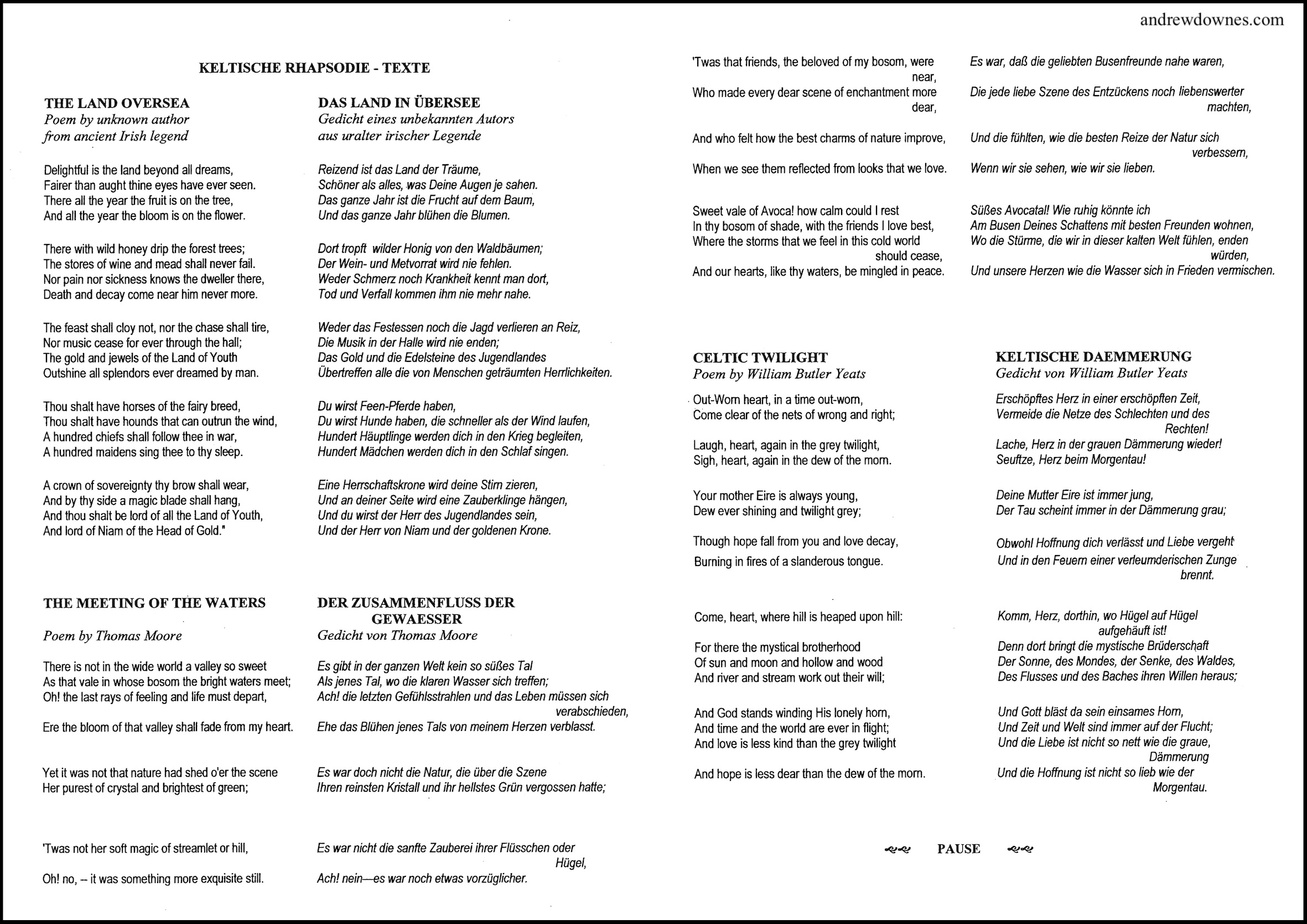 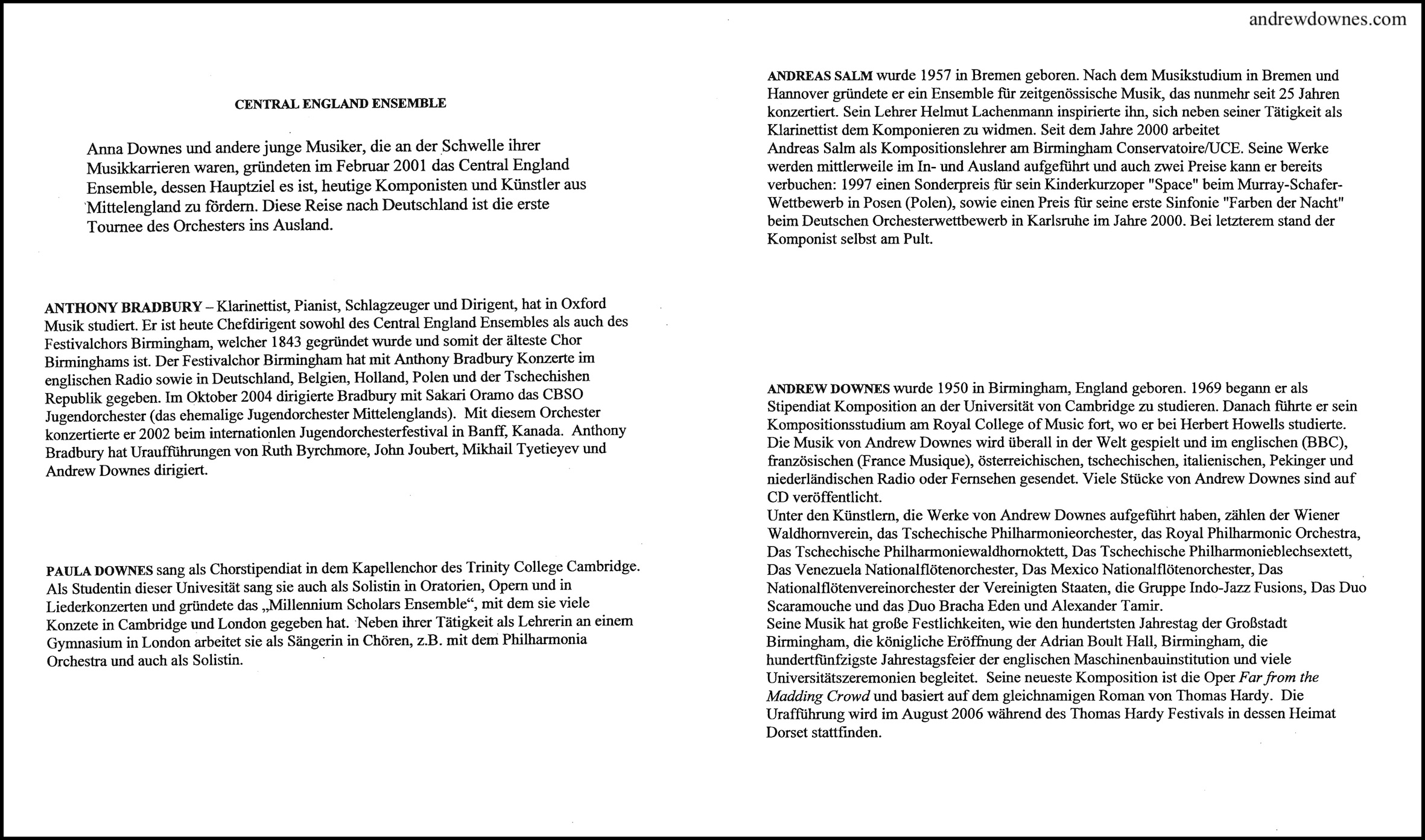 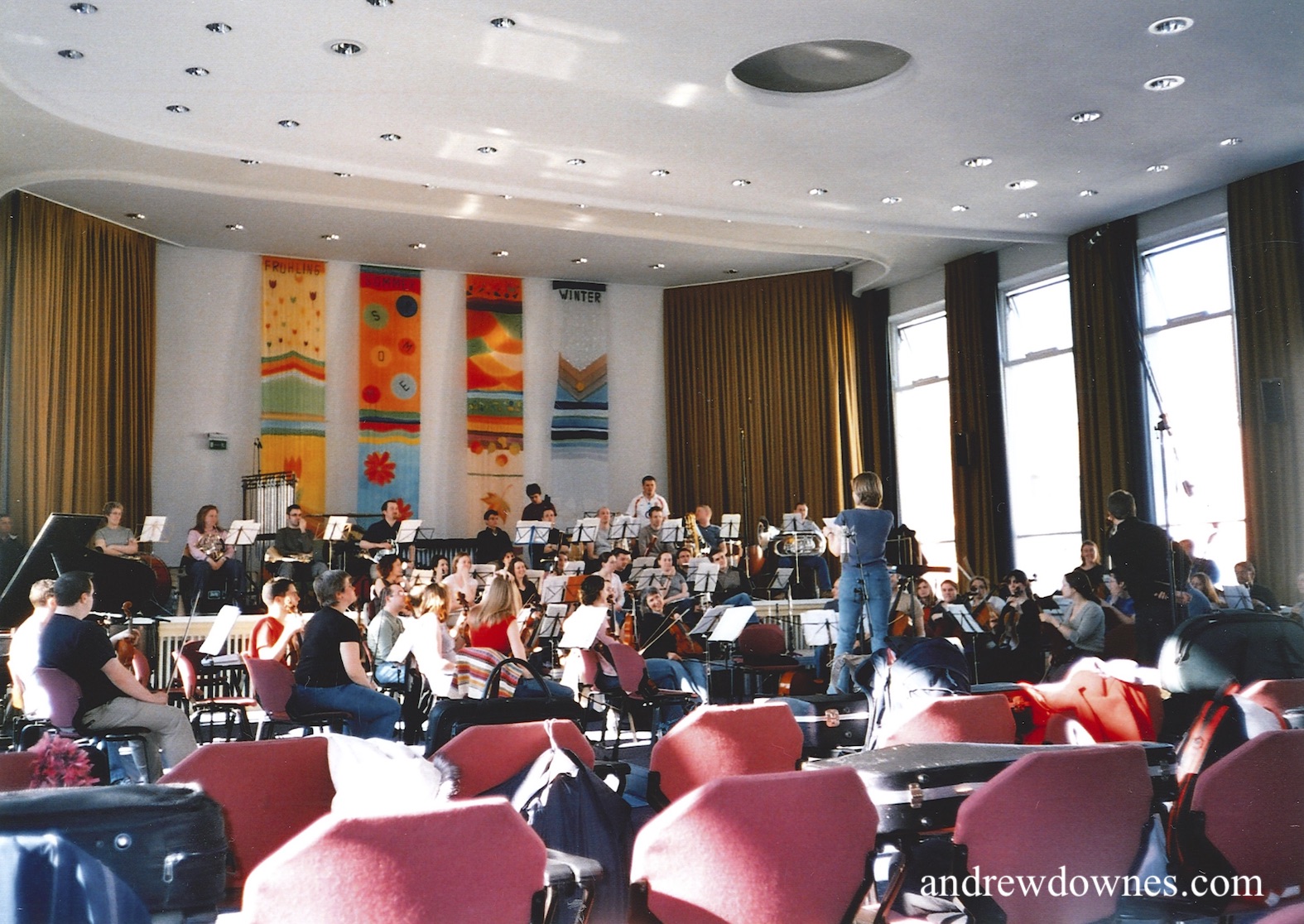 Rehearsal at the Volkshochschule, Bremerhaven, Anna Downes in front of CEE 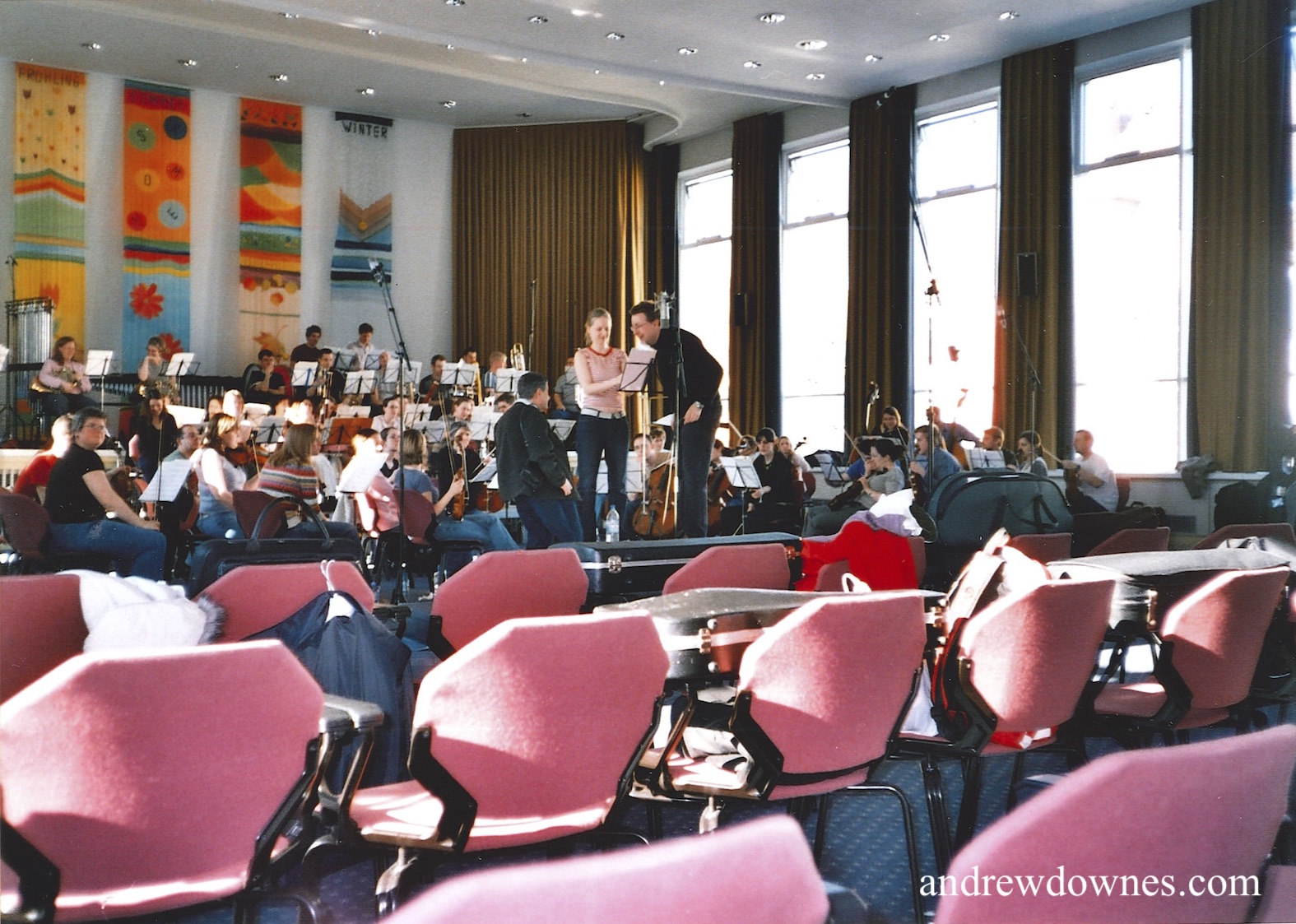 Paula Downes in front of CEE 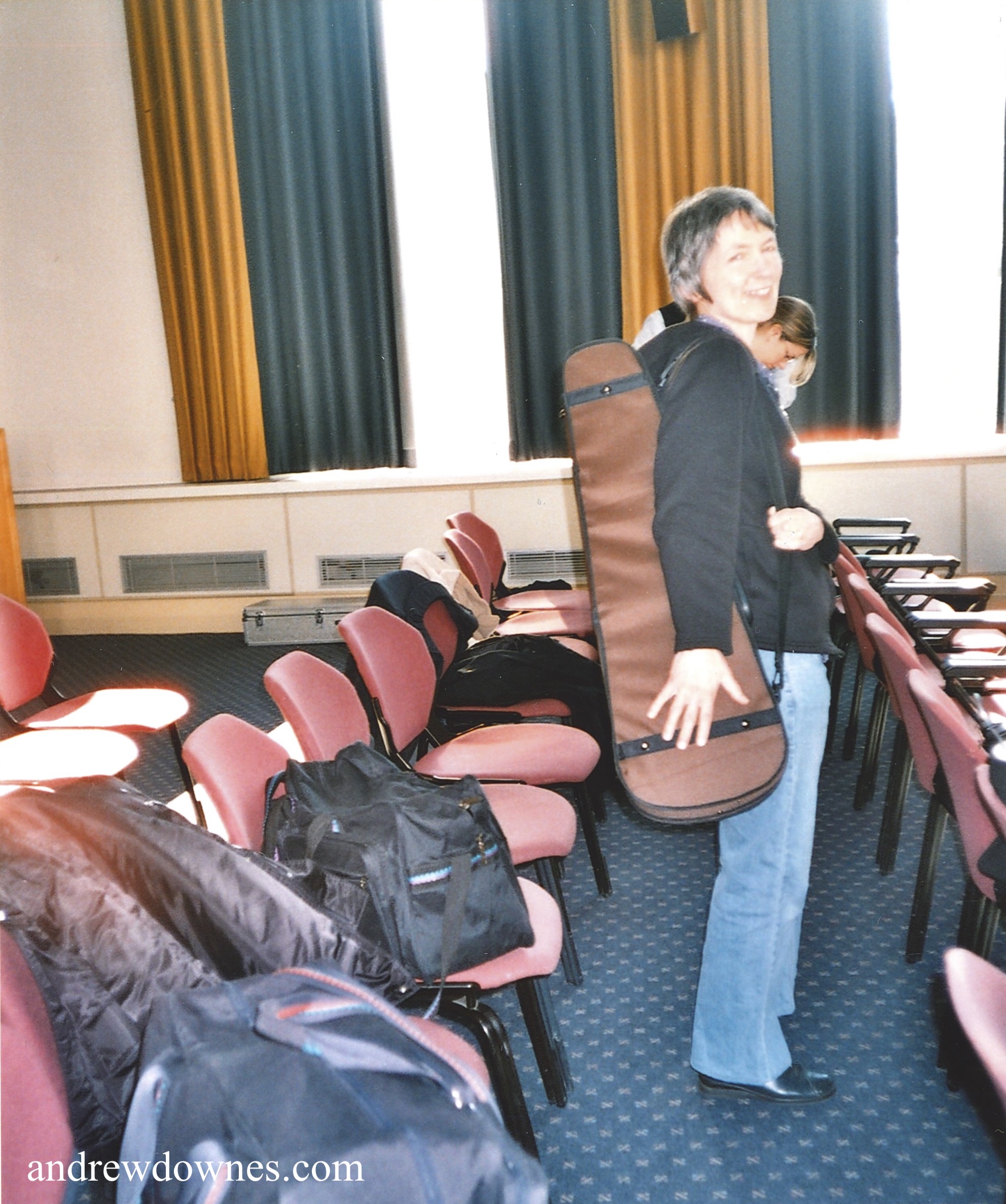 Celebrating at the end of the tour: 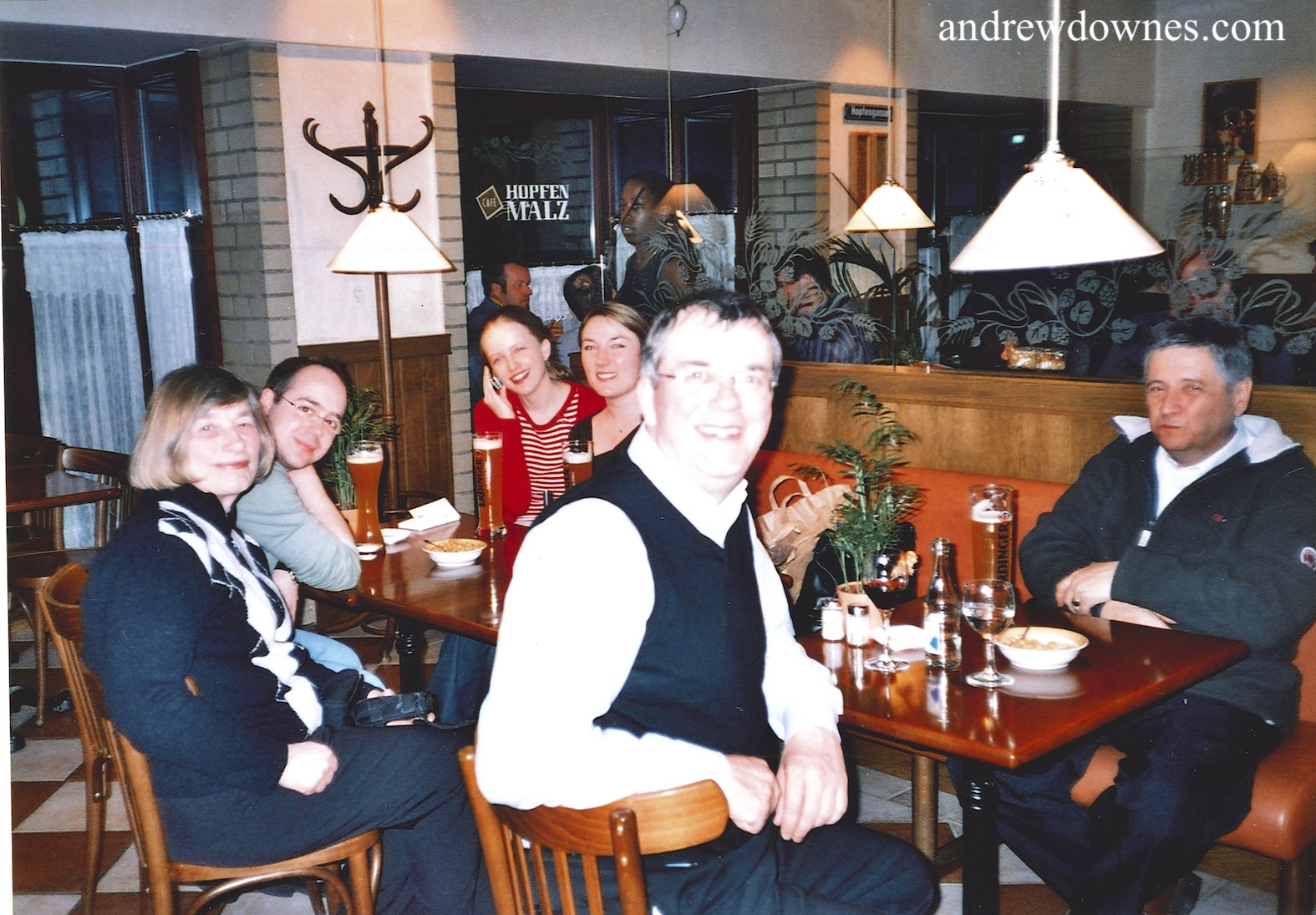 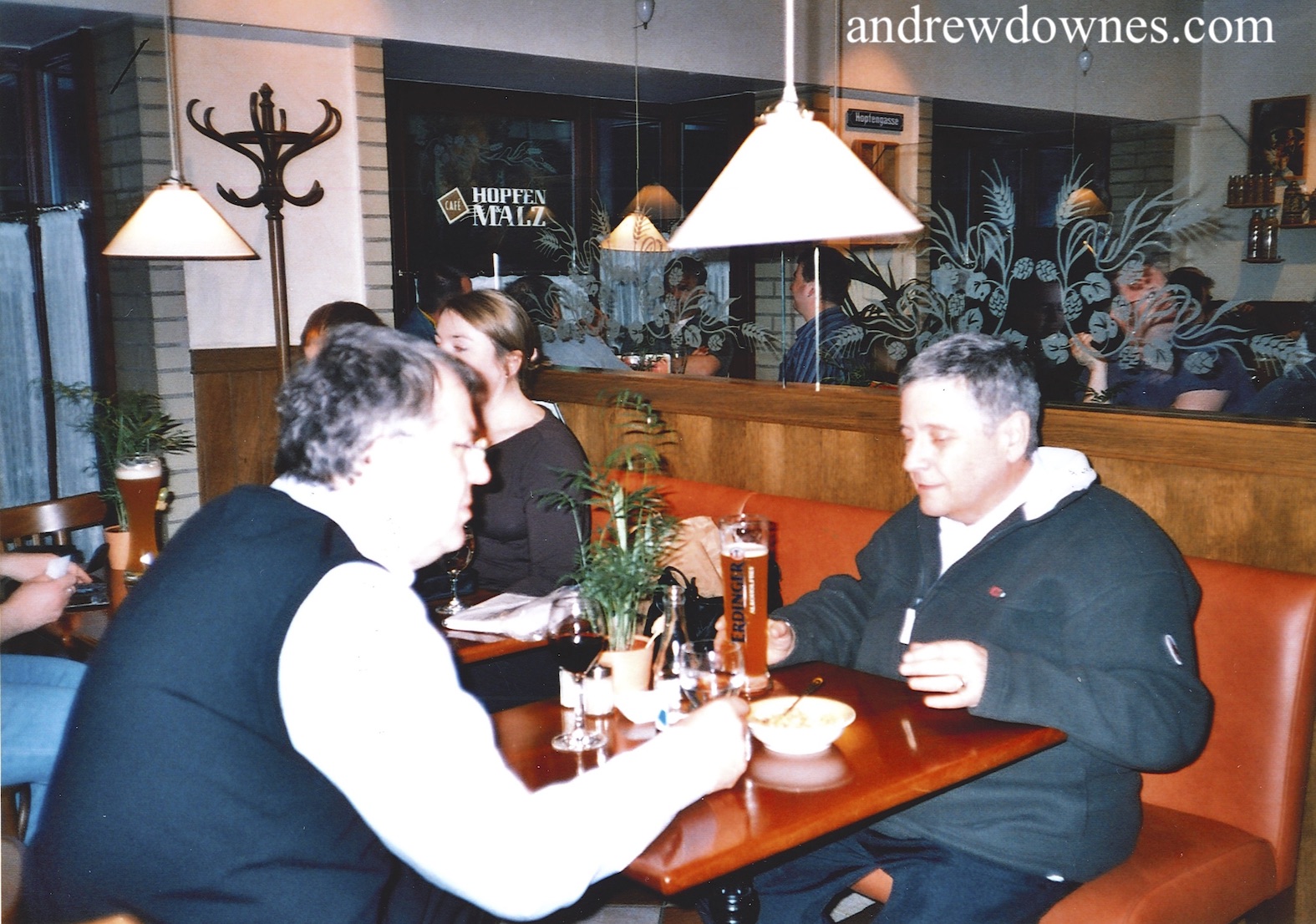 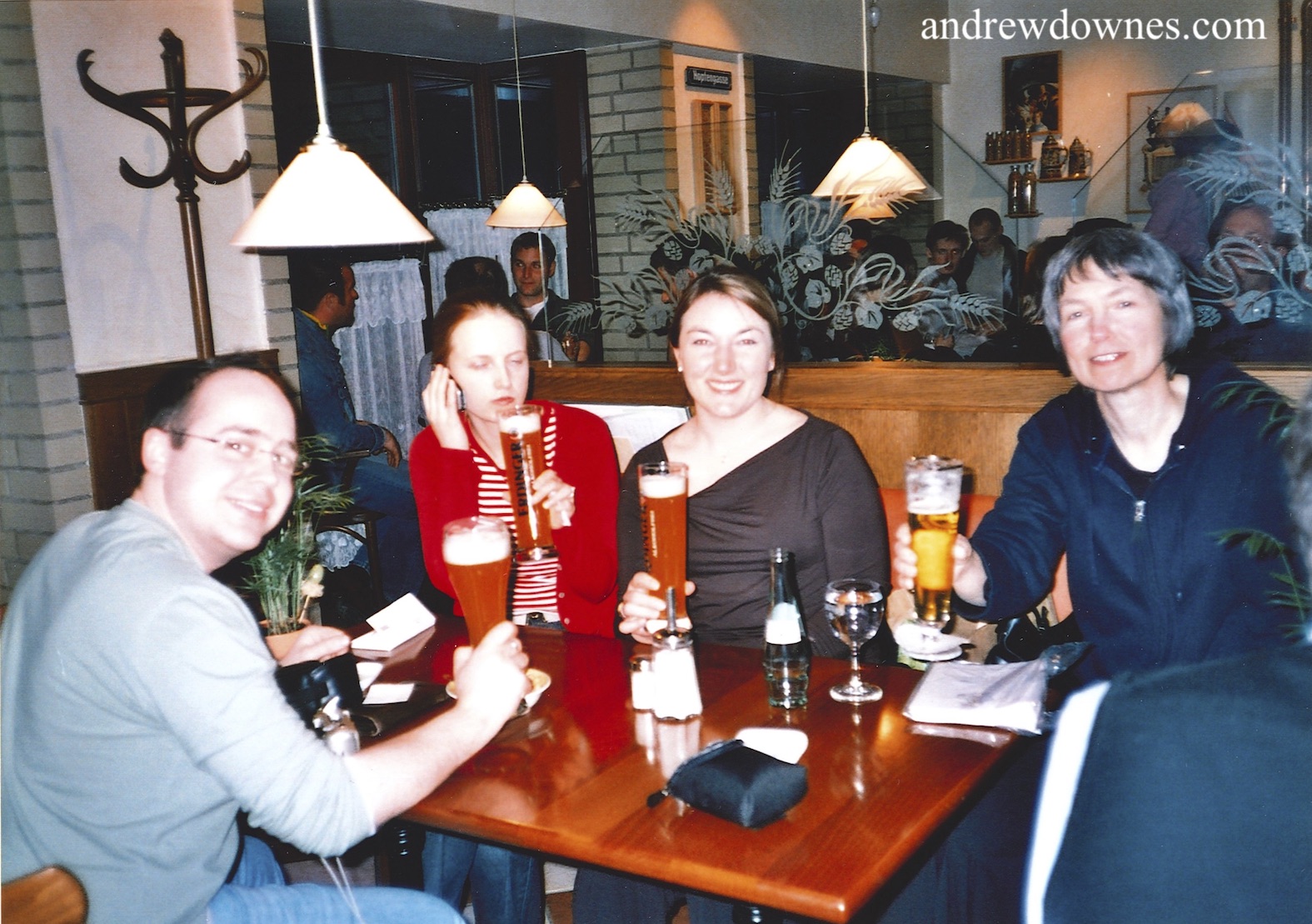 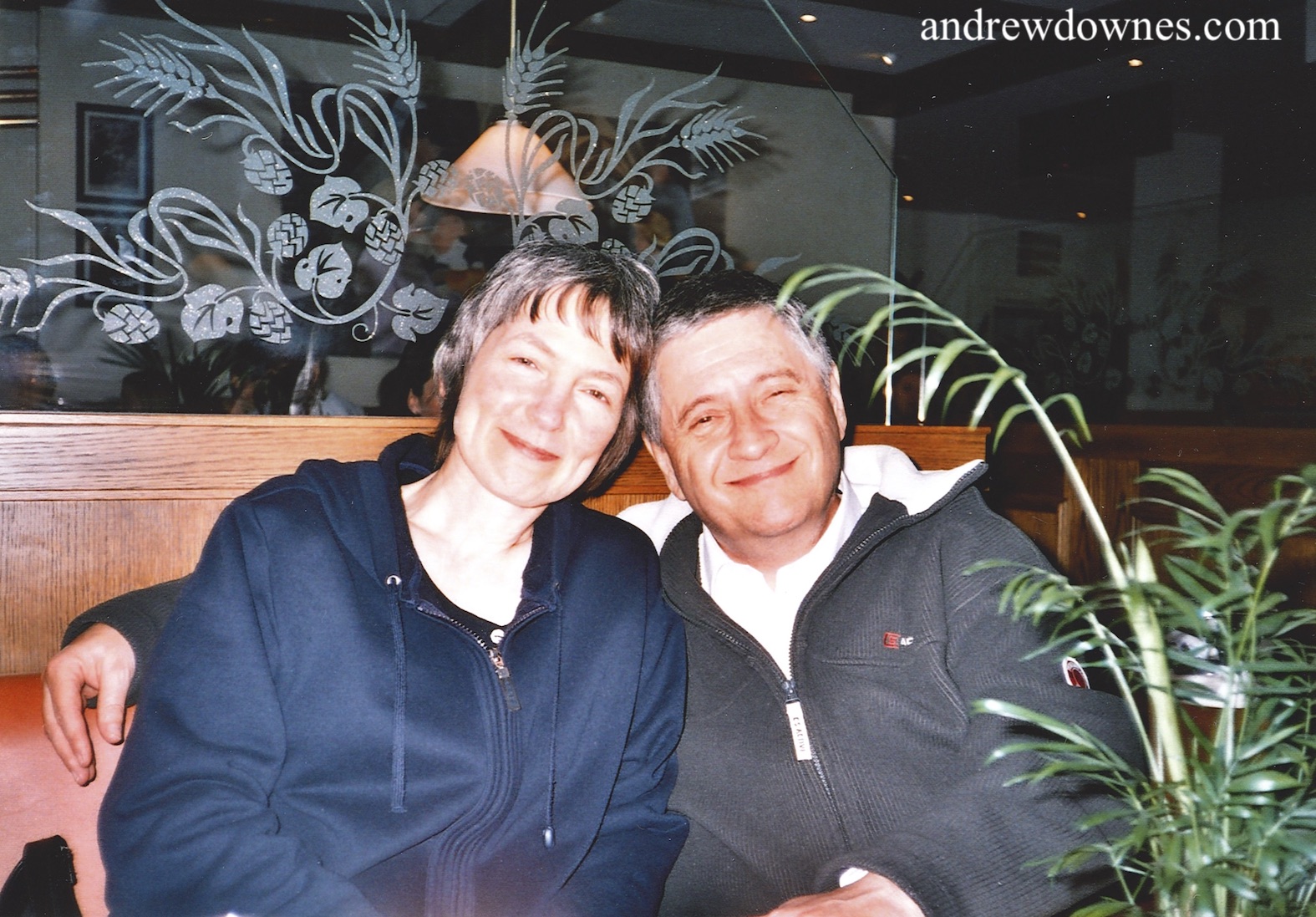 In 2019, Paula created a version of Celtic Rhapsody for Soprano with Piano Reduction to perform with pianist Tony Bridgewater in recitals. They premiered the arrangement in their recital at St James Church, Wollaston, Stourbridge, as part of the Local and Live concert series, on 4th May 2019 and performed the work again in St Alphege Church, Solihull, in July 2019. 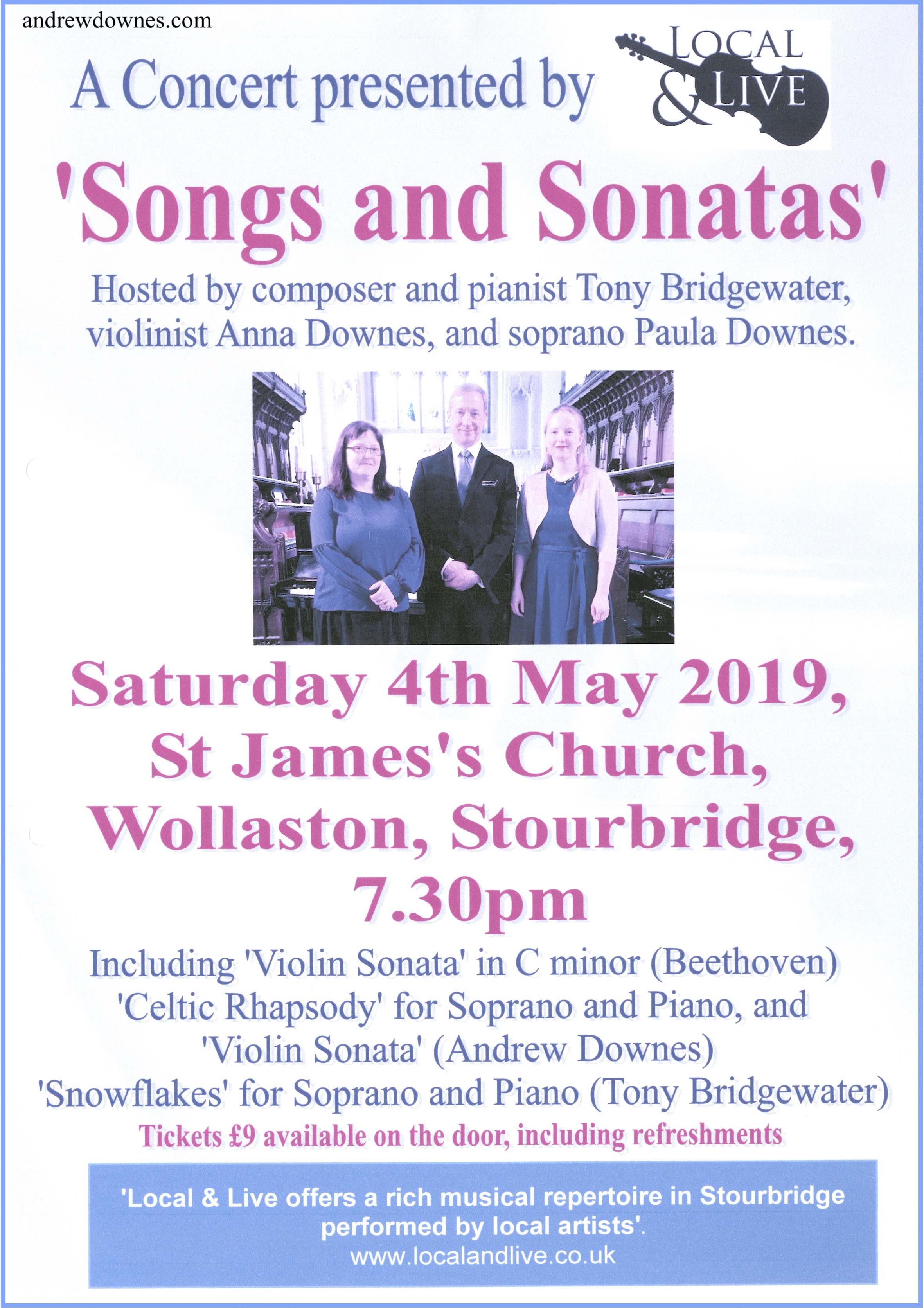 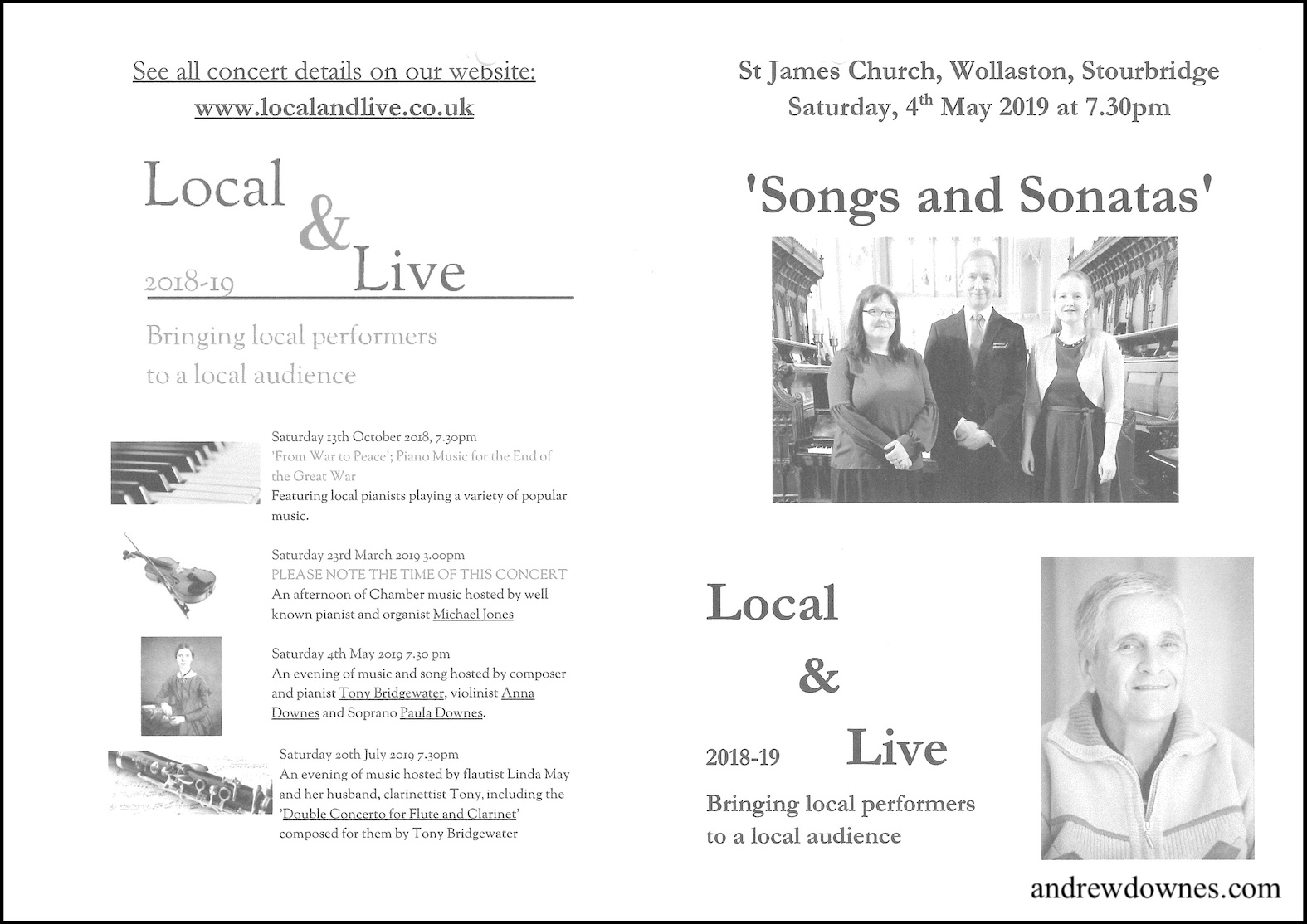 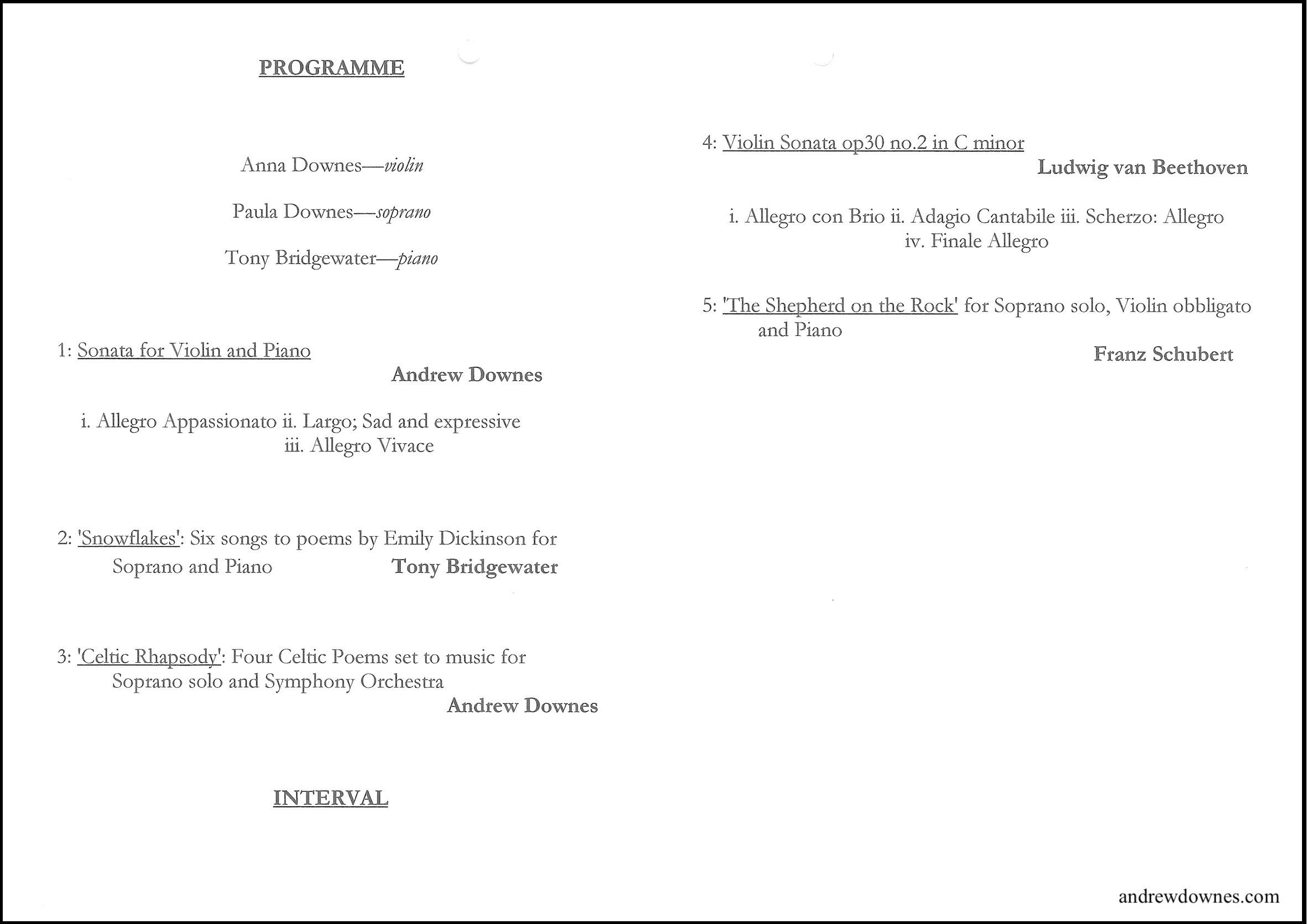 In May 2019, Paula performed the work in its original form at the Hagley (Worcestershire) Music Festival with the Central England Camerata, again under Anthony Bradbury and with Anna leading the professional orchestra which she had founded in 2013. 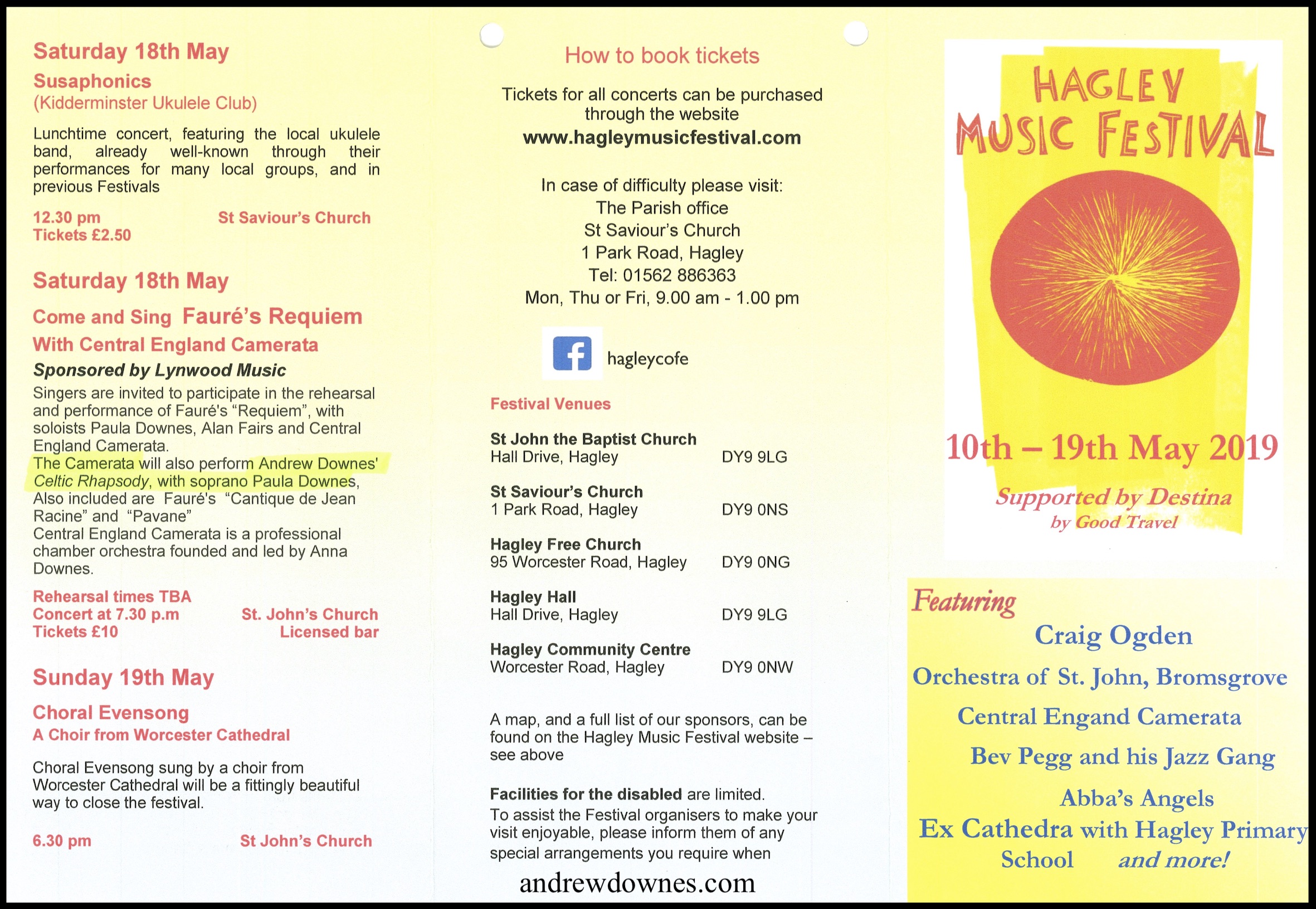 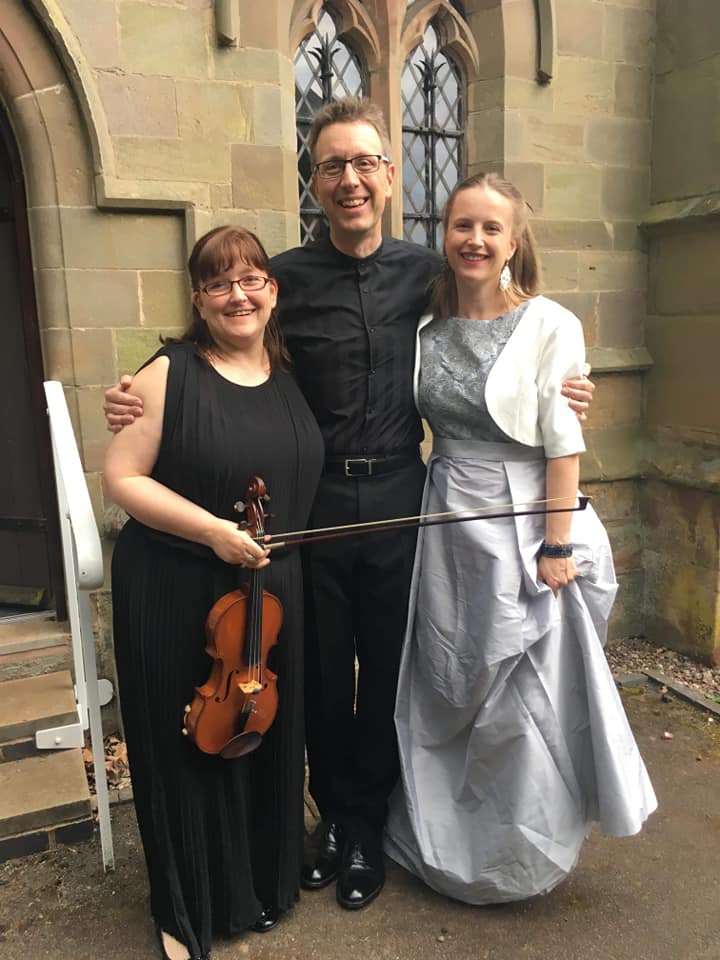 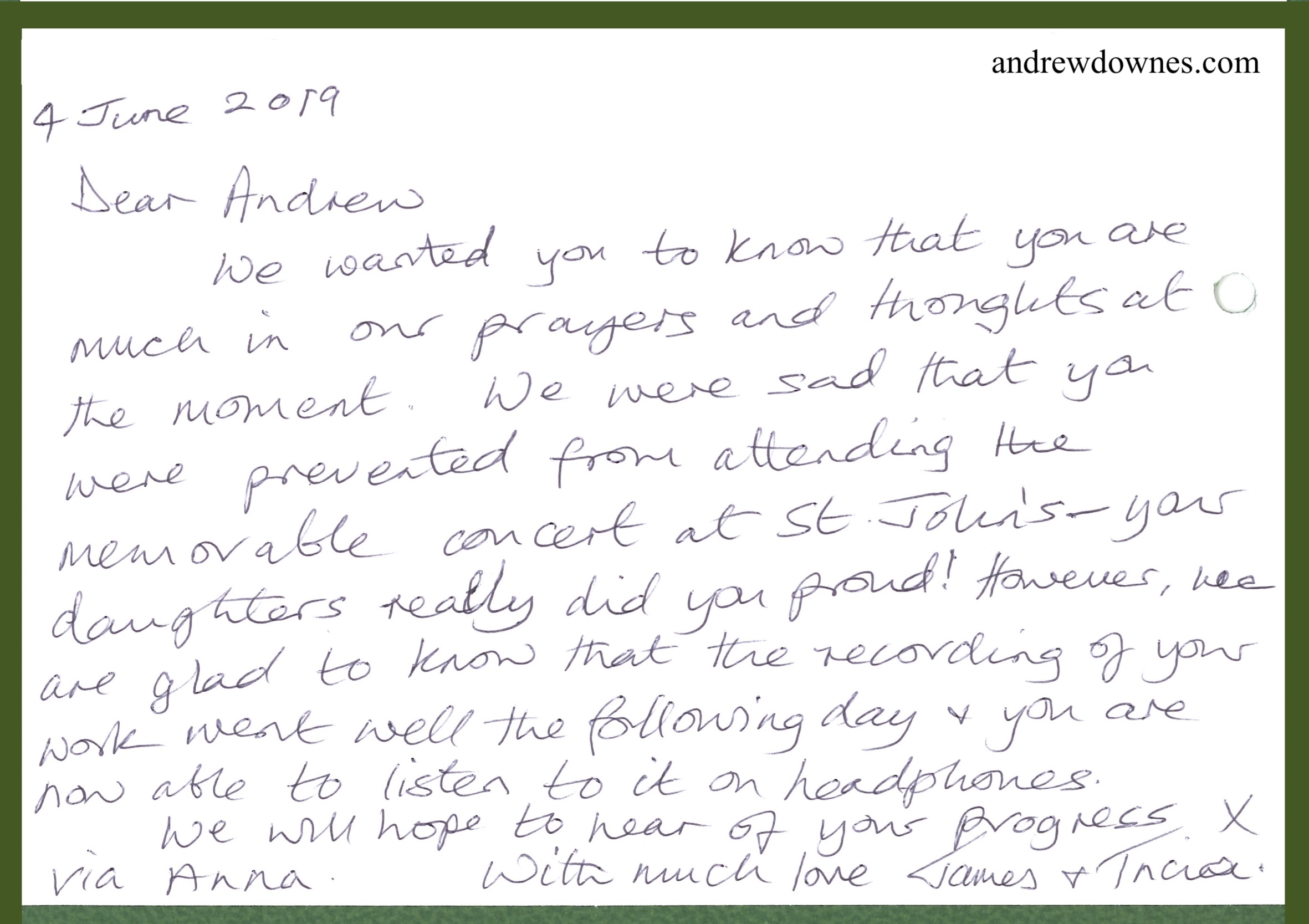 The same artists recorded the work the following day at the Foleyan Centre, Oldswinford Hospital School, with recording Engineer Paul Baker.  Andrew and I were unable to attend these events because Andrew was in University Hospital, Coventry, having broken his neck in a wheelchair accident...  I describe this traumatic period in my Blog, Andrew Downes: a lifetime of ill health.  We were delighted to hear the recording however. 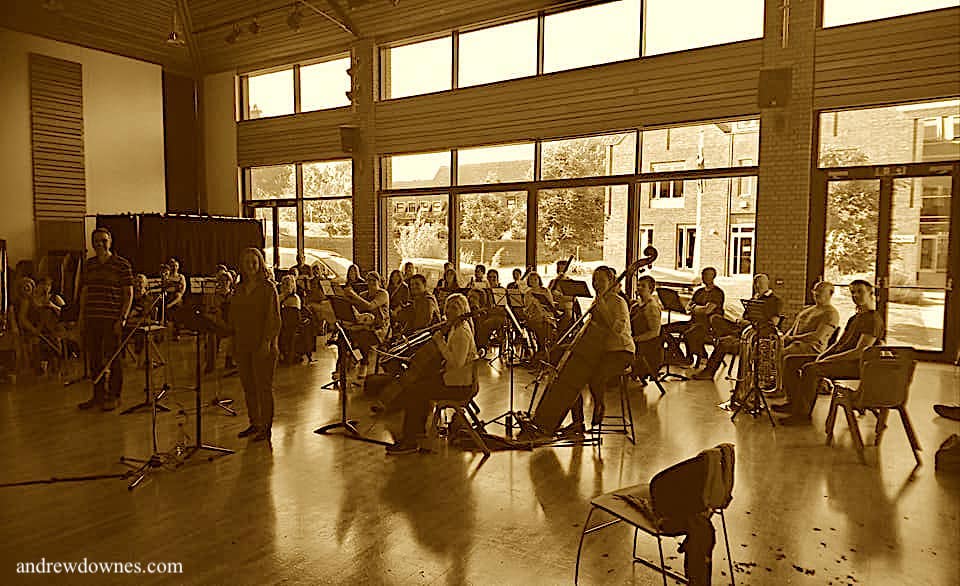 In the summer of that year, using the recording, Paula created 3 beautiful films portraying Celtic landscapes and featuring herself and her 2 daughters.  Quite a lot of the filming took place in Worcestershire.  Paula and the girls came to stay with us and I went on the filming expeditions with them. I often found myself operating the camera for the scenes featuring Paula. 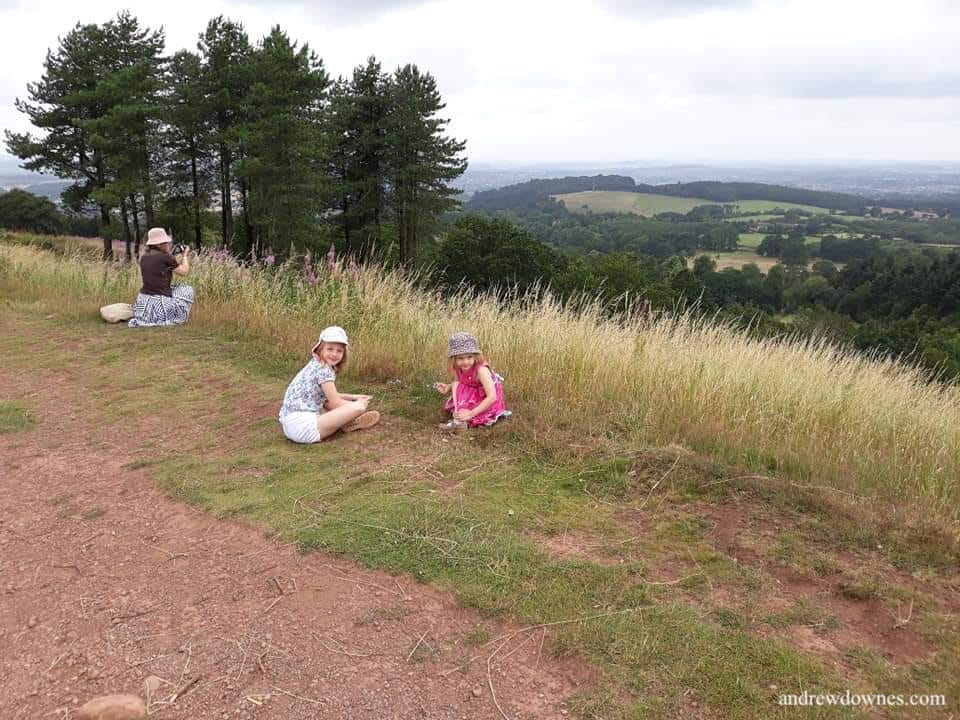 Paula and her daughters. filming at the top of the Clent Hills, Worcestershire.

Paula sang the songs again in a special Central England Ensemble reunion concert, directed by Anthony Bradbury, in the Elgar Concert Hall, Bramall Building, University of Birmingham, in February 2020, celebrating Andrew's 70th Birthday year, and raising funds for Stoke Mandeville Spinal Research. I was thrilled to play in this very special performance and especially because Andrew could come to it with our son-in-law, Mike, and our 2 grandsons, Oscar and Max.

See the write-up on this 70th Birthday concert, compiled by Paula Downes 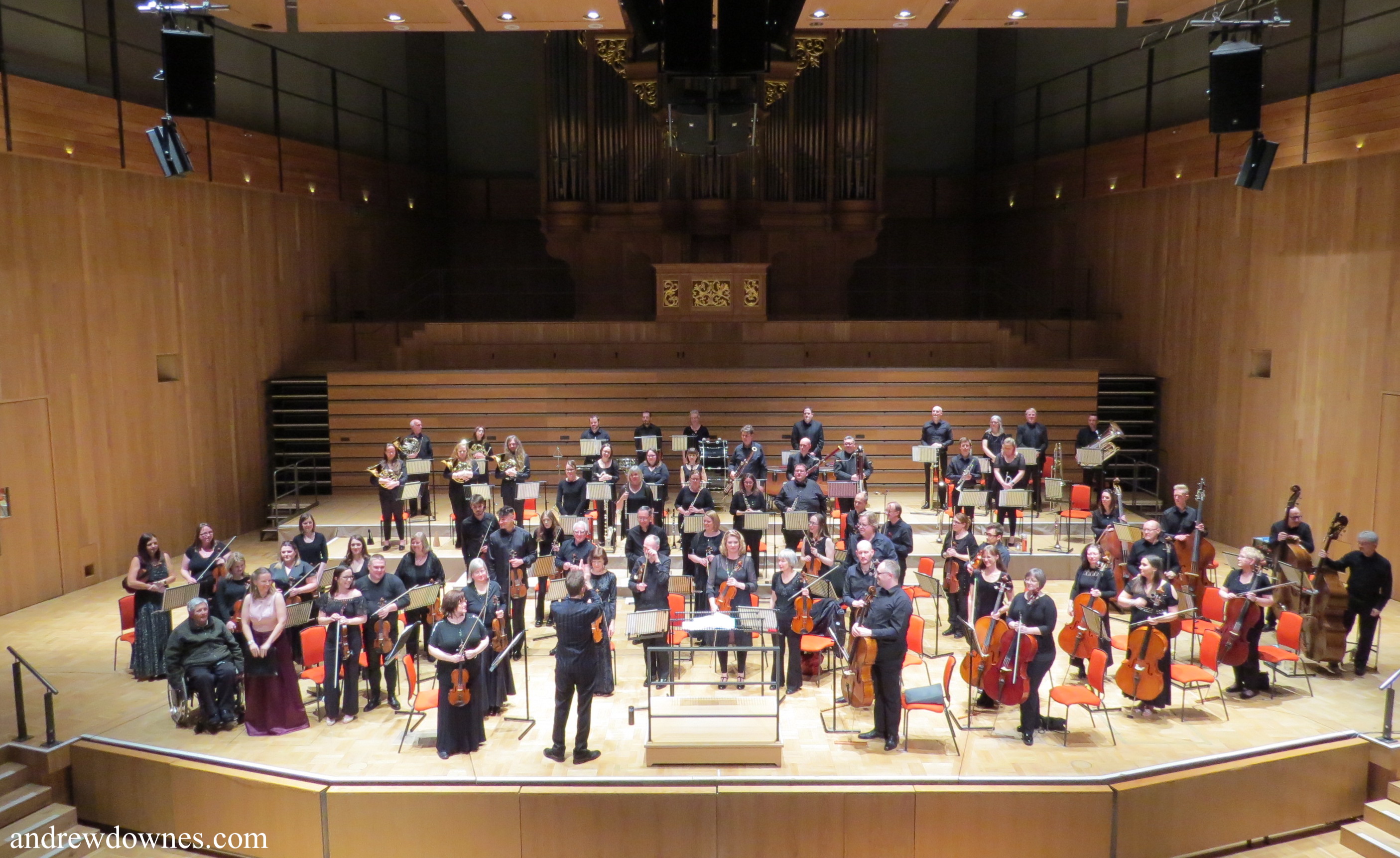