If you have performed in any of Andrew Downes' works or come to listen, please share your experiences in the Premieres Blog! Also see what others have said. Thank you so much for your contribution. 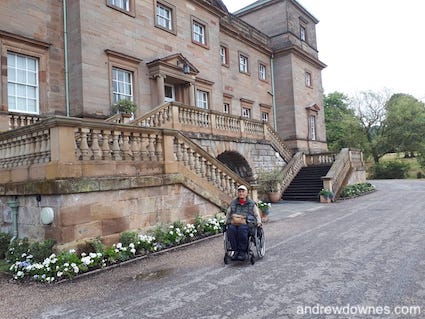 Andrew Downes outside Hagley Hall where his 6th Symphony is to be performed as part of his 70th Birthday celebrations, raising money for Stoke Mandeville Spinal Research. #andrewdownes70

An account by his wife and publisher, Cynthia Downes, posted on June 1st, 2020

I remember my mum telling me when I was quite young, long before I met Andrew, that all great composers have to suffer. This is certainly true where Andrew Downes is concerned.

When he was 12 years old, while Andrew was on a camping holiday with his family in the South of France, he was struck down with pain in his left hip one morning and couldn't move.  The painful condition plagued him throughout his teens and wasn't diagnosed till he was eighteen. He was told by a consultant that he had ankylosing spondylitis, an arthritic disease which slowly creeps up the backbone, destroying the cartilage between the vertebrae and gradually fusing the spinal column together, leaving it rigid and brittle.

In his teens and twenties Andrew walked without flexibilty, but had a very straight back, which lasted until his 30s. The following 3 photos illustrate his upright posture: 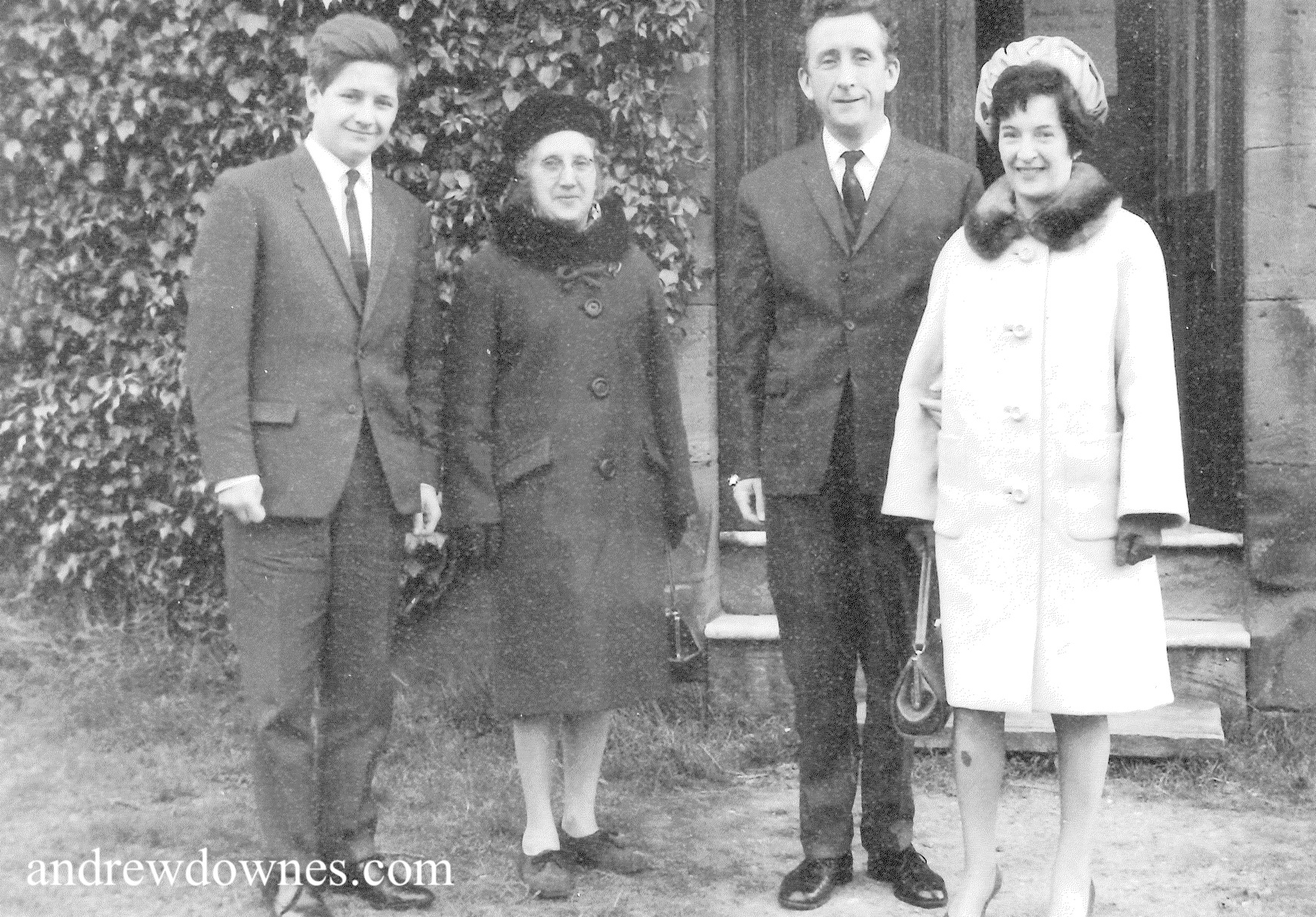 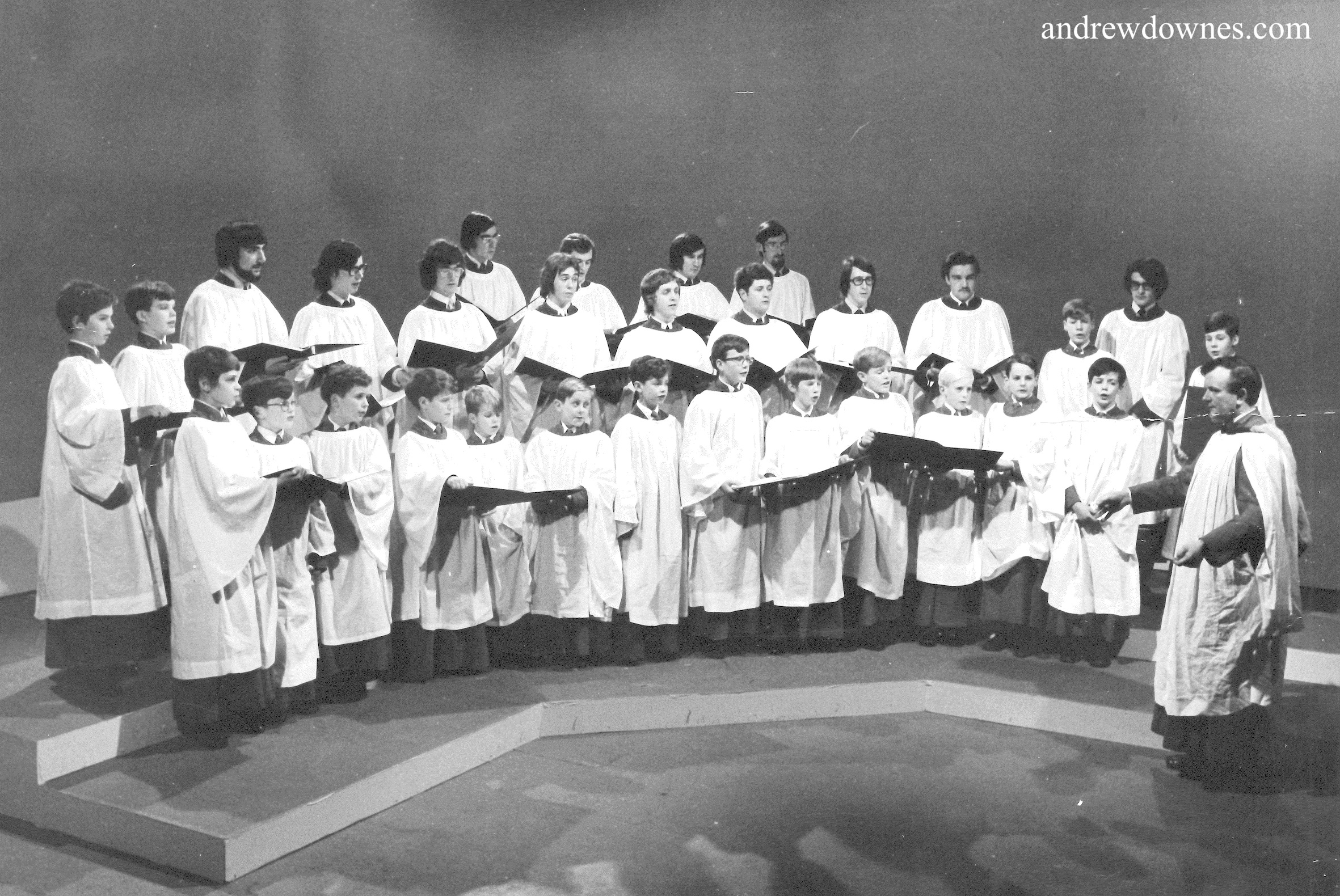 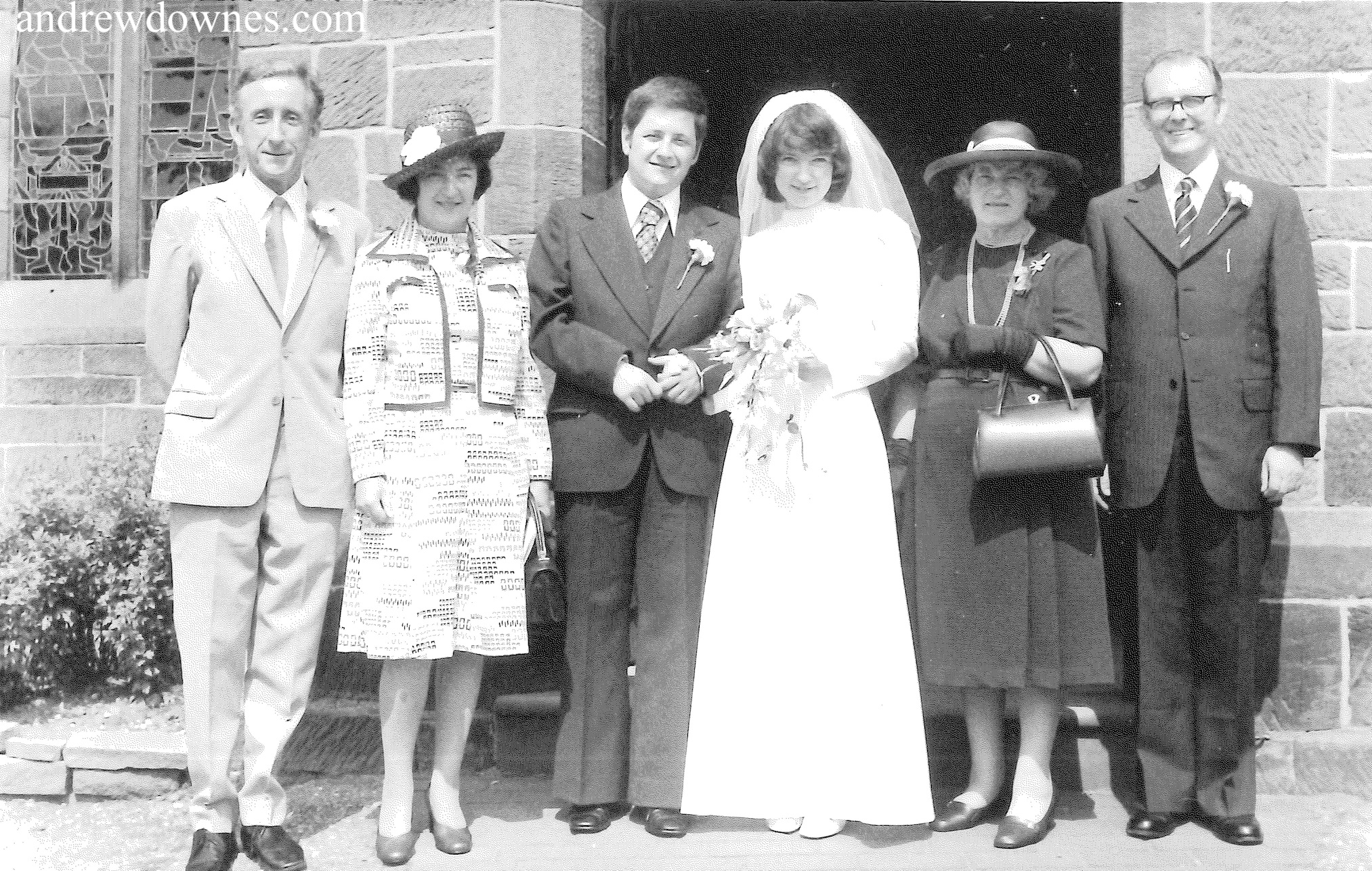 Then, over the years Andrew's spine gradually curved over like a walking stick, causing constant, immense pain and stiffness. The developing curvature can be seen in the photo below and in the photo in the next article, which appeared in the Solihull Select magazine in 1995. 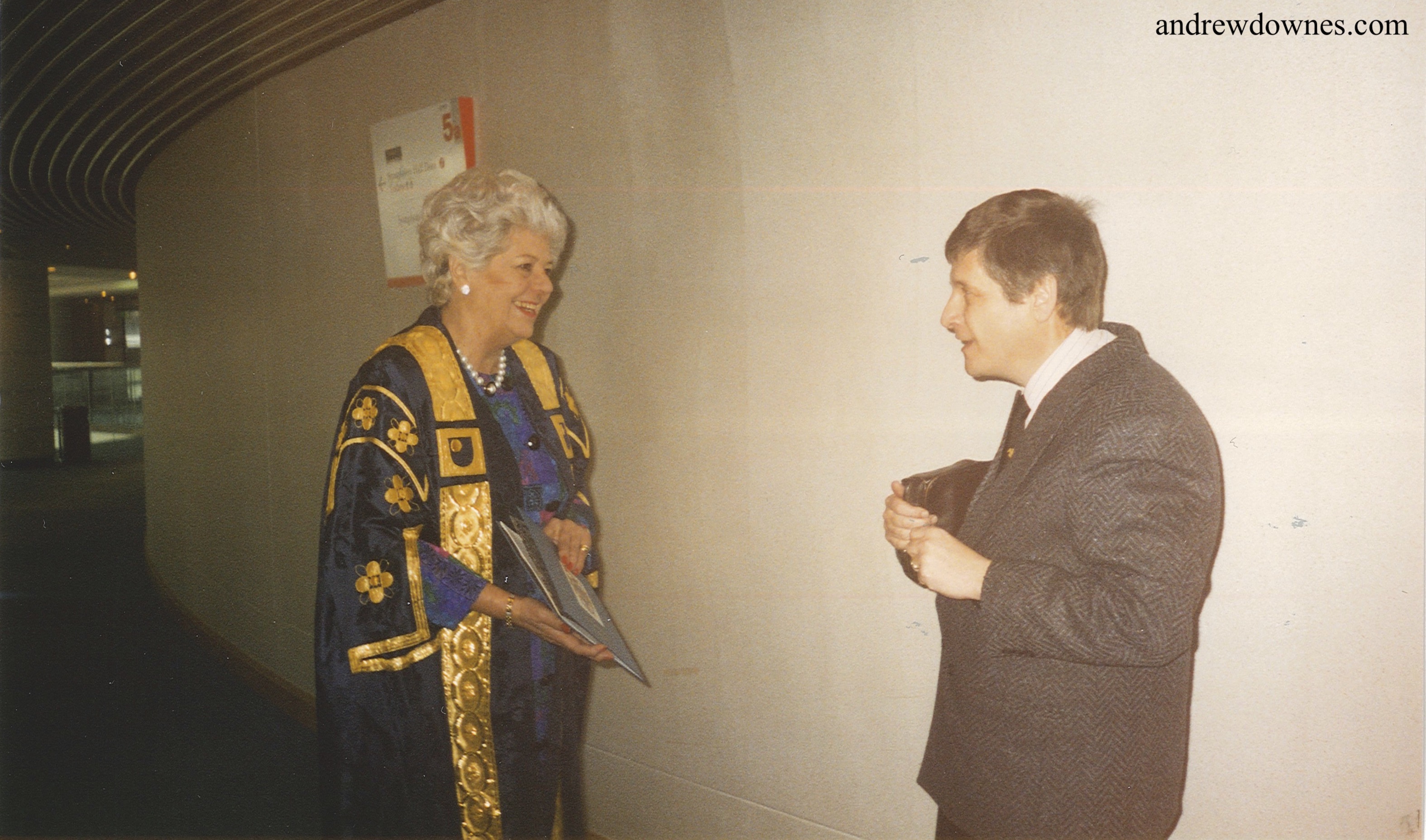 Andrew Downes talking to Betty Boothroyd after his Fanfare for Madame Speaker had been premiered at her Installation as Chancellor of the Open University at Symphony Hall, Birmingham 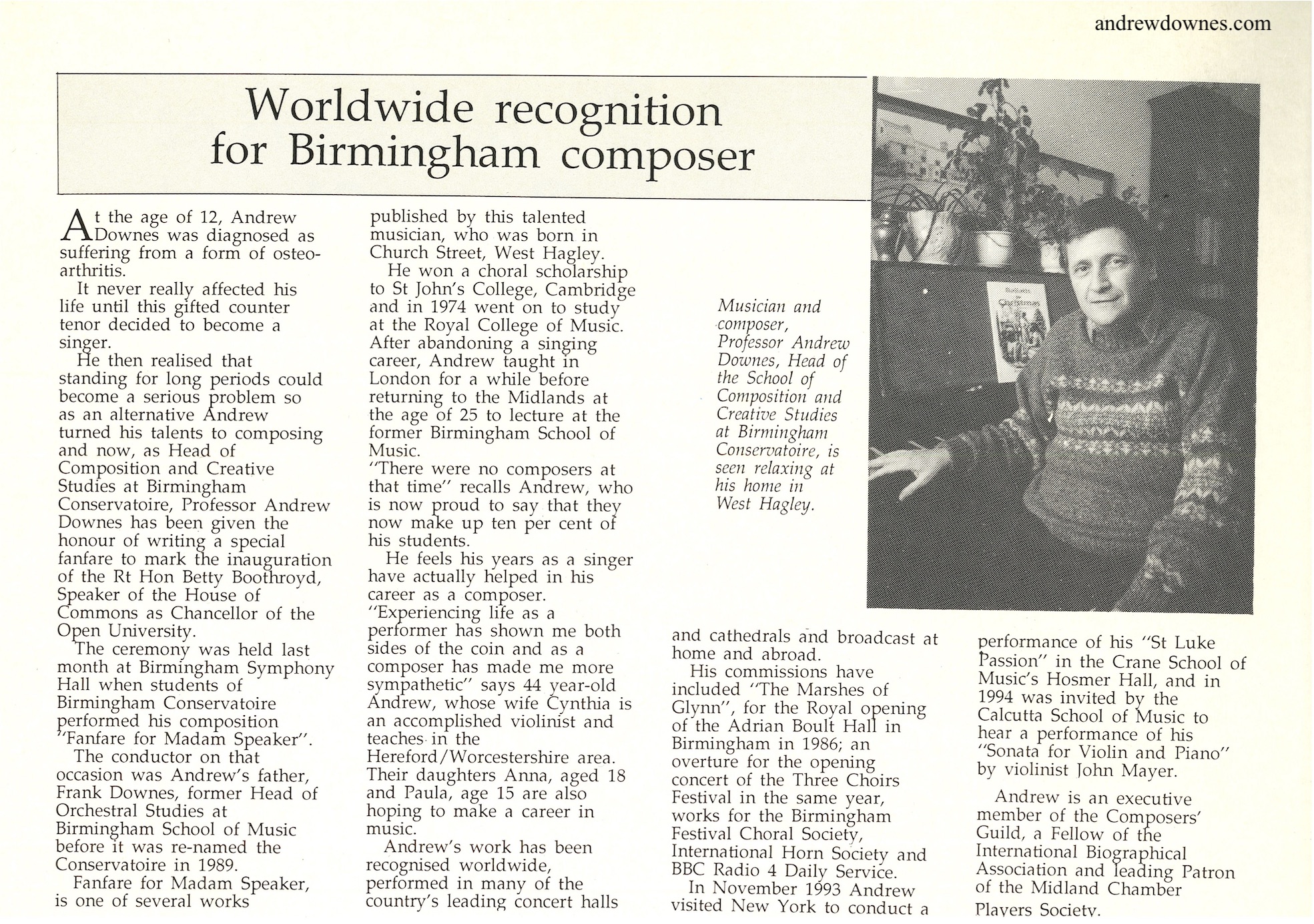 Andrew never complained and led a full and active life, starting up Composition Studies and becoming Head of Composition at the Royal Birmingham Conservatoire.  After his early retirement on health grounds (after 30 highly successful years at Birmingham Conservatoire), he was awarded an Emeritus Professorship for carrying out his work at the Conservatoire 'with distinction'.  At the same time he has carried on composing throughout his life, no matter what.  Performances of his music have happened and still happen all over the world.

On the morning of October 8th 2009, when Andrew, then aged 59, got up at 5am and went into our music room to turn our computer on, his left hip gave way. He fell and I think our sellotape dispenser fell on his head: on hearing a crash I rushed in to our music room and found him unconscious on the floor.  I dialled 999. The ambulance drivers, not knowing that he was normally a person who would never scream out in pain, made him get up and walk down the stairs. The doctors in A&E at Russells Hall hospital diagnosed a urinary tract infection.  Our daughter Paula and her husband David came up from Hertfordshire to be with us and help us through the long wait for treatment (Anna, our older daughter, was herself in hospital at the time, having undergone a hysterectomy). Andrew didn't get an x-ray until 9pm that day and then had to wait till the next morning for an MRI scan, which finally revealed his back was broken in two. It took all the day of October 9th for the medics to get him to the Birmingham Royal Orthopaedic Hospital and organise for a surgeon to mend his back. Mr Mel Grainger, a brilliant surgeon, came in that Friday evening and operated on Andrew between 9pm and 3am. Mr Grainger said if he could have done the operation within 24 hours of the accident, he could have guaranteed Andrew would walk again, but he warned us that now our lives would radically change. He was very angry that we had been kept waiting so long in A&E/EAU.

After a week in the Royal Orthopaedic hospital, Andrew was transferred by ambulance to the Spinal Injuries unit at Stoke Mandeville hospital. The journey caused him to lose so much blood that he had to have a transfusion of 3 pints.  The care in the unit was excellent.  Andrew spent 9 months there, gradually healing and learning how to live as a paraplegic.  He never complained and was always cheerful.  The nurses always put depressed patients next to him, because he always cheered them up.

(I spent half of the week there and half at home, seeing to Lynwood Music orders and organising adaptations to our house. Our daughter, Anna, approached Irwin Mitchell Solicitors, who immediately pursued a case of clinical negligence and at the same time gave us immense help and advice on the house adaptations and the challenges we had to face.)

I wrote an article on our Stoke Mandeville experiences for our local Parish Magazine. It can be viewed here: 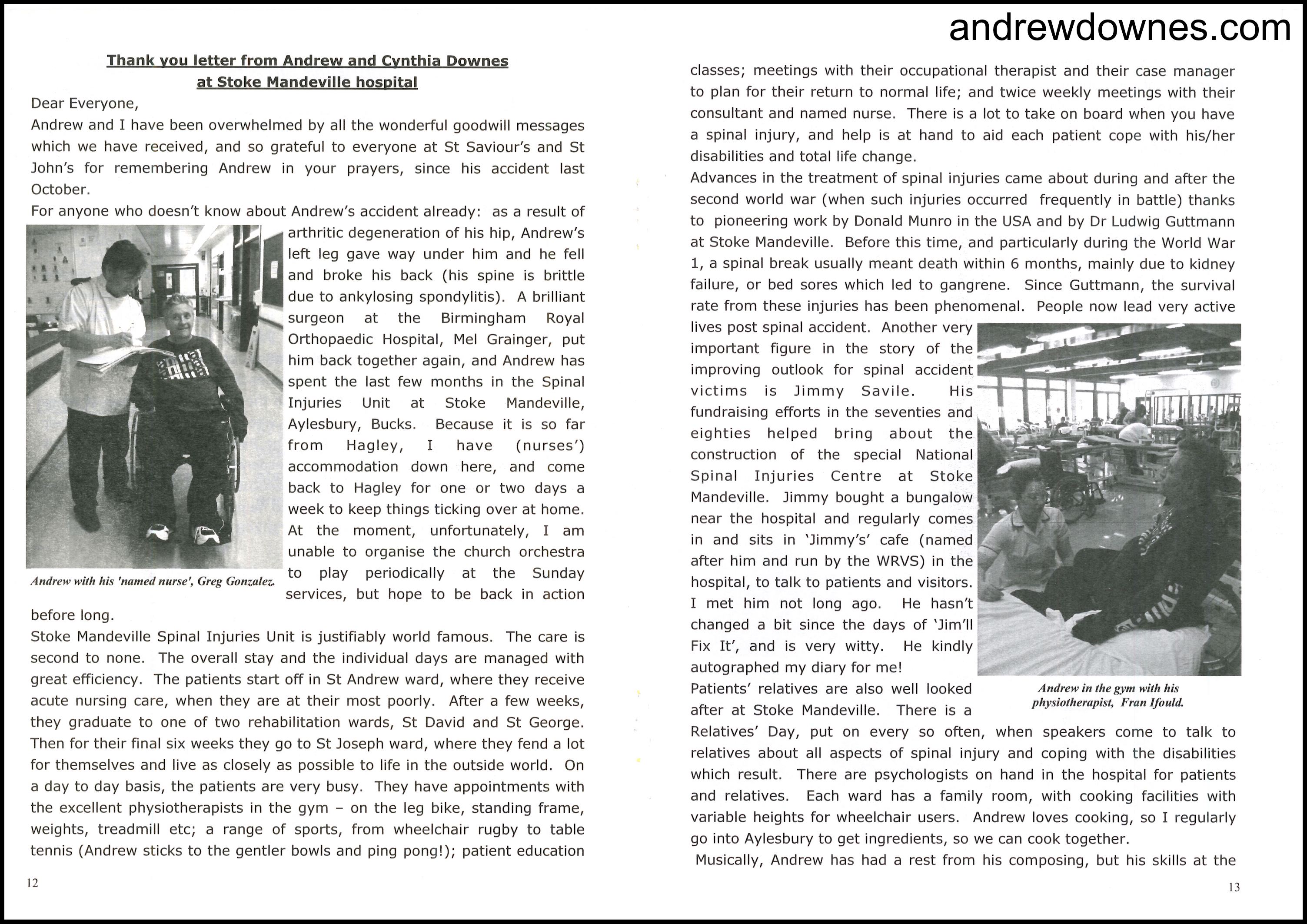 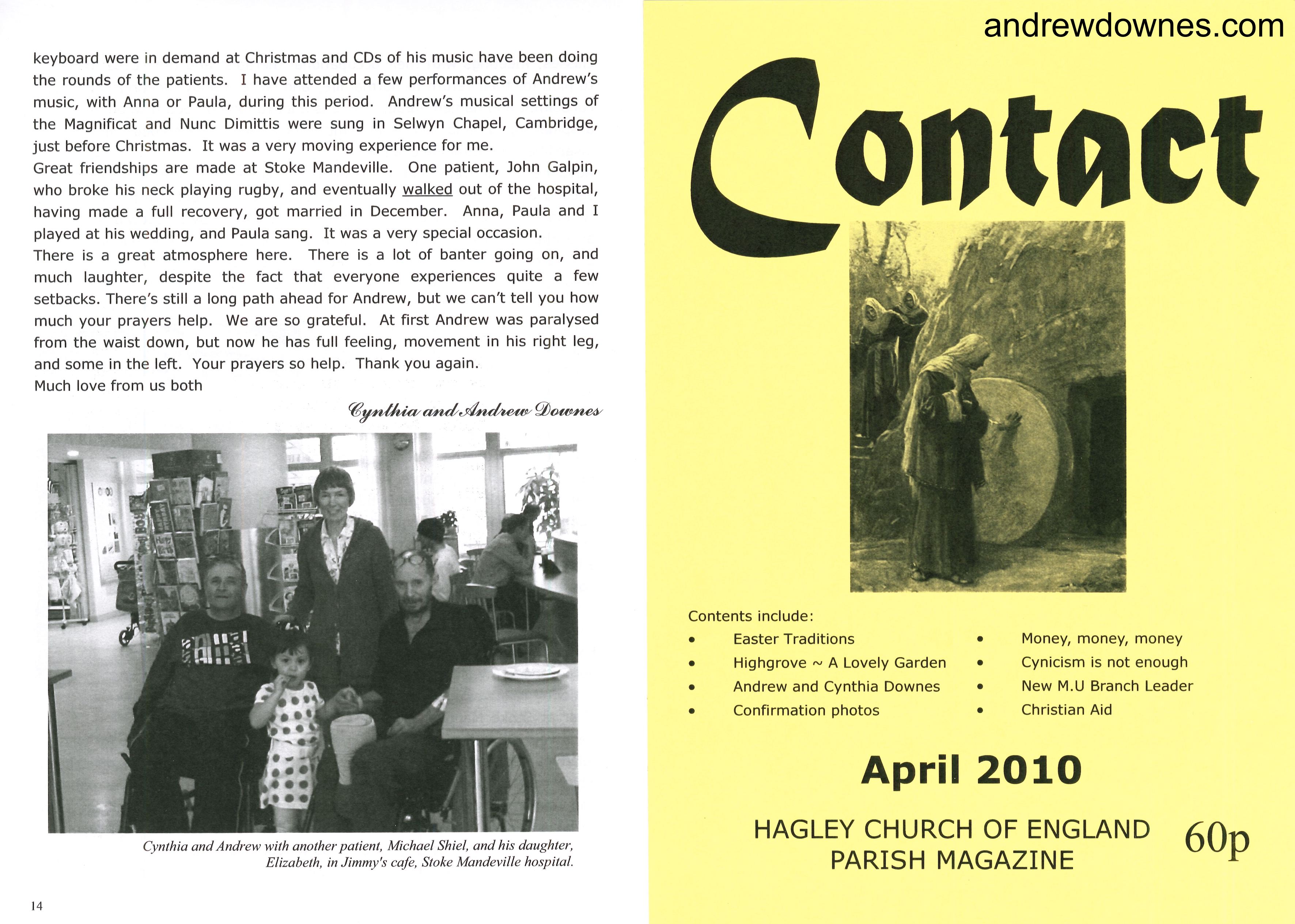 We gingerly left hospital on June 23rd 2010, having been given training in transfers in and out of the car and all kinds of preparation for our new life.

Andrew didn't compose during his 9 month stay in Stoke Mandeville, but it was all going on in his head... When he got home he quickly completed his Horn Concerto for Czech hornist Ondrej Vrabec with Anna's Central England Ensemble. We performed the work in Birmingham Town Hall in 2012. 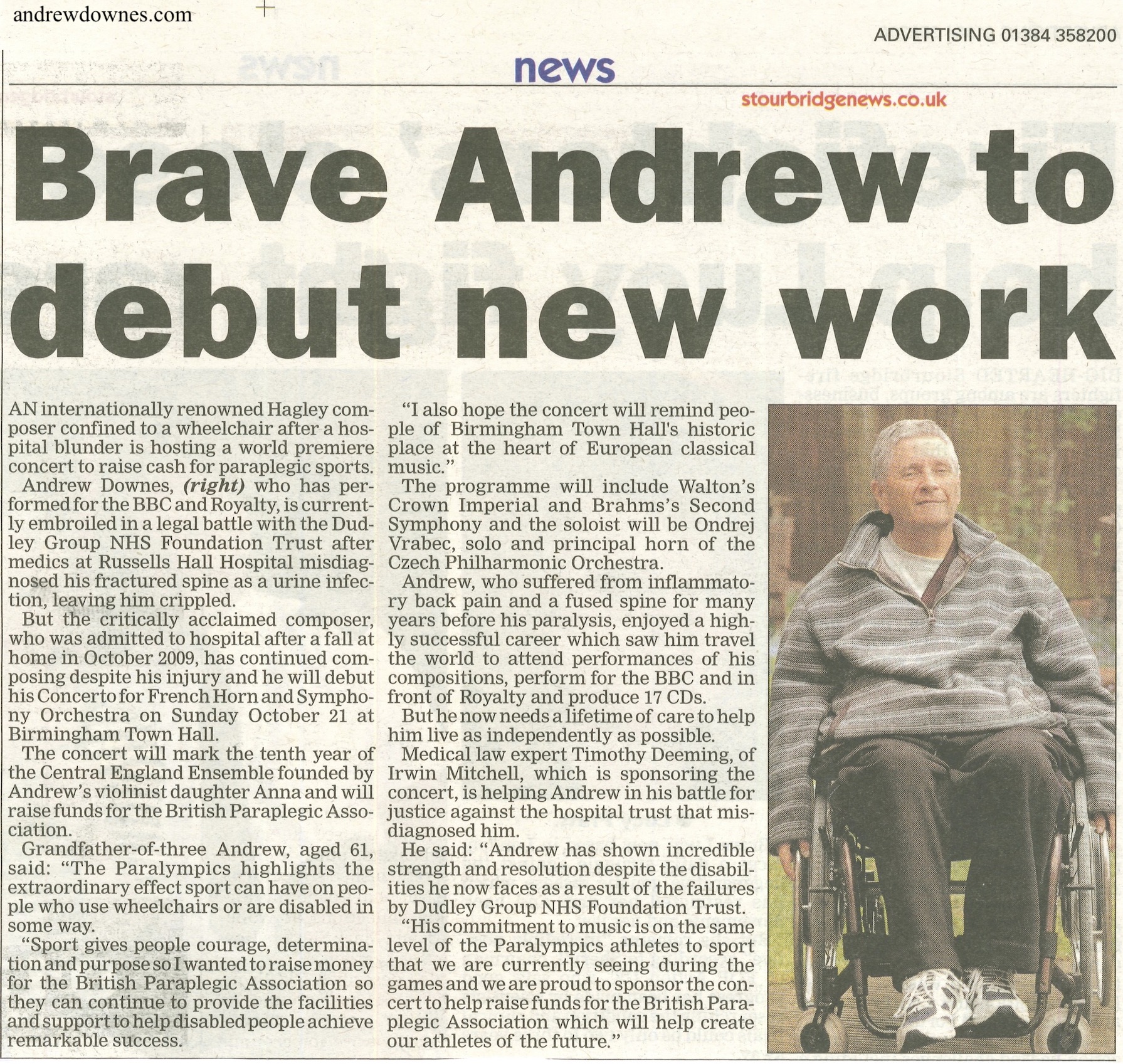 Life got easier when we got a wheelchair accessible vehicle with an automatic ramp (with financial help from 'Motability') which we used to drive around the Midlands to take flyers for our concerts.

Andrew's bone fragility problems were not over, however.  He suffered 3 leg breaks in wheelchair accidents. His x-rays showed quite severe osteoporosis and so he has to take calcium every day and the very strong drug, Risendrate, once a week.

For his pain Andrew was taking gabapentin and ibuprofen regularly, which in themselves caused problems. He started to fall asleep throughout the day and caused himself bad leg burns when he fell asleep with a cup of boiling hot coffee in his hand.  Then in 2015 he suffered a brain haemorrhage, caused by the ibuprofen. Russells Hall hospital Stroke Unit knew what they were doing in this case and brought him through in a matter of days. Having completely lost his speech, Andrew recovered within a short time. He was discharged by a very nice consultant at the hospital after a month. Then, after 3 months we received a letter saying his MRI scan results had come through and showed he was suffering from incurable cerebral amyloid angiopathy, which would cause more strokes, dementia and death within 10 years. Andrew refused to believe it. I wondered if they had sent this letter to the wrong person. A year after the stroke we had another letter, this time from Bromsgrove Health Authority, saying they were now happy to discharge him. Our GPs have never mentioned it. Now almost 5 years later, Andrew has not suffered from those symptoms (touch wood).  One thing that letter taught me was to make the most of each day we have together.

At Christmas 2016 Andrew contracted a chest infection. By New Year, he got so bad that I dialled 999. The paramedics, having carried out various tests, said Andrew was ticking all the boxes for sepsis and needed to go to hospital. This was the very worst time of the year. The hospital was packed to the rafters with patients. It reminded me of the pictures of Florence Nightingale in the Crimean war.  The hospital said there was no room for visitors, so our daughter, Anna, had to go home. I insisted on staying, because Andrew needed me as his carer. I stayed all night tending to his needs and getting some sleep on an uncomfortable plastic chair. Andrew slept in his wheelchair. At 4am Andrew, still in his wheelchair, was put on a drip of strong antibiotics, which zapped the infection. We went to the next stage, the Emergency Assessment Unit, at about 5am, but Andrew was discharged from there mid morning.  I was very impressed how the A&E had gradually dispersed all their overnight patients to different wards or home. We were very relieved that for us our journey out of EAU was homeward.

In December 2018, Andrew again became very unwell. He wasn't himself at all and got so bad that he couldn't use the TV remote, his mobile phone or the computer. It was again a bad time for hospitals, with ambulances queuing outside A&Es. Knowing Andrew could not survive that, I waited to phone the surgery for an urgent appointment with the doctor next day. The doctor immediately booked Andrew a bed in a very nice assessment ward in Russell's Hall Hospital. We had avoided A&E!  But the hospital couldn't help, despite numerous tests. After 5 weeks, we found a nursing home for Andrew, because we had no hoist at home and Andrew was now too weak to use his standing turner to get into bed. After another week, Andrew coughed up blood at the nursing home. He was taken by ambulance to the Royal Worcester hospital, where an endoscopy revealed he had non alcoholic sclerosis of the liver. The doctors didn't hold out much hope for him and in a conversation with Anna, Paula (who had driven up from Cambridge) and myself, asked us to sign a 'Do not resuscitate' form.  Andrew spent 5 days in their High Care unit. All of a sudden, on arriving at the hospital one morning,  I discovered he was in the Discharge ward. A miracle drug, Rifaximin, which stops the toxins given off by sclerotic liver from causing brain damage, saved his life. Andrew quickly started to recover his brain function and has been able to compose just as brilliantly for the last 2 years.

The woes didn't end there, unfortunately. Just after Easter in 2019, we realised we had forgotten Andrew's ramp when we visited Anna and family in Kidderminster.  We therefore took the anti-tips off the back of his wheelchair to get him over Anna's doorstep. We were so busy talking, that none of us remembered to put the anti-tips back. When he flipped his front wheels over Anna's bathroom door threshold, he tipped backwards and broke his C7 vertebra in 2.  For 3 weeks no medics in our area would recognise the need for a neck x-ray. Our daughter Anna arranged for us to see the first available private specialist, who happened to be in Coventry (30 miles from our home in Hagley. Our son-in-law Mike drove us there). The specialist took about 12 x-rays, didn't like what he saw and sent us to Coventry University hospital, where Andrew spent the next 5 weeks. The hospital was caring, clean and efficient. Mr Sneath, the brilliant bone specialist there, decided not to operate, because Andrew's bones were too brittle, but instead made him a neck and thorax brace. I commuted from home to the hospital, taking 6 trains and 2 taxis altogether each day, but I didn't mind the travelling, knowing Andrew was in safe hands.


Andrew in his neckbrace in Coventry Univeristy Hospital

Andrew is now in his 70th year and our daughters have organised numerous celebratory events: #andrewdownes70, raising money for Stoke Mandeville Spinal Research and for Anna's 'Music for Sanctuary' charity for the homeless. In February Paula sang Andrew's Celtic Rhapsody with Anna's Central England Ensemble, conducted by Anthony Bradbury, in which I also played, in the Elgar Concert Hall of Birmingham University. During the coronavirus lockdown a number of Andrew's works have been performed online. We are still hoping to perform his Symphony no 6 at Hagley Hall at a special 70th birthday concert in the autumn. He still composes daily. At present he is working on a violin concerto for Rupert Marshall Luck.