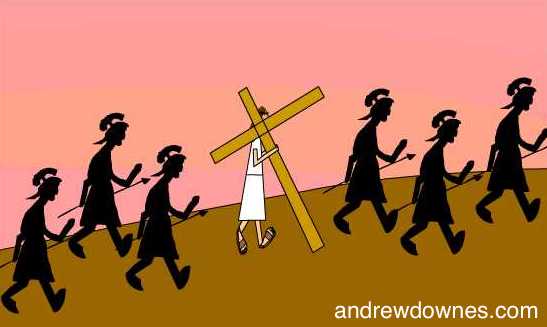 Andrew Downes was a member of the Midland Boy Singers when he was growing up and they sang a lot of plainsong and polyphony. He was later a Choral Scholar at St John's College Cambridge. These experiences had a profound effect on his compositions.


Plainsong, plainchant, or Gregorian chant was the first music performed in churches starting in the 3rd century. Religious texts were set to a single unaccompanied vocal line, sung in unison. Listen to this plainsong.

Now listen to the 'Kyrie' from Andrew Downes' Sacred Mass for Solo Voice and compare the two:

Modes
Plainsong melodies used notes of modes (scales, but there are more of them than just major or minor). Visit our modes page to find out more. Andrew Downes bases a lot of his music on modes other than the regular major and minor scales. The 'Kyrie' above begins and ends in the mixolydian mode starting on D (D, E, F#, G, A, B, C D). The mixolydian mode is like the major scale but with a flattened 7th. Here it is starting on G:

In around the 9th century, when composers began to put two and then more vocal lines together, it was called polyphony. Poly = many; phony = sounds. The 2 parts often moved in parallel motion, in the same direction (up or down in pitch), and was also called organum. Listen to this example:

Now listen to Andrew Downes' 'Ghazal of Italy: Milan and Rome' from Songs of the Skies. You will hear some parallel organum at the words: 'where seven hills whisper to walls, a piazza of a people calls'. It happens one more time in the song. Listen out for it! You will hear it in the instruments first.

Now listen to Andrew Downes' 'O vos omnes' and notice the similarities: clearly defined sections ending in cadences (musical endings); some sections in two parts, others in more parts; when one part is moving, another part will hold a long note; bare-sounding chords; one voice copying another:

Palestrina was an Italian Renaissance Composer in the 1500s. He perfected the art of imitative polyphony/counterpoint, where you start with a melody in one voice part, and other voices come in higher or lower with a similar melody, imitating the voice before:

Listen out for imitative counterpoint in Andrew Downes' 'The Souls of the Righteous'.

Single line melodies also began to be harmonised with a chord for each note in four parts: Soprano, Alto, Tenor and Bass. J.S. Bach, the most famous German Baroque composer who was born in 1685 and died in 1750, perfected the art of harmonising Chorales, which were German hymn tunes originally sung in unison, similar to plainchant. Here is his chordal harmonisation of Jesu meine Freude (listen up to 1:00)

Now listen to Andrew Downes' 'The Lord is my Shepherd', which is harmonised in a similar way, in chords (read our page on chords to found out more):

Another technique church composers developed, was to take an existing plainsong melody, or a hymn tune/chorale melody, and write lots of music around it. The original hymn tune was called the cantus firmus. Here is an example by Bach: the chorale melody,  'Jesu Joy of Man's desiring', surrounded by a wonderful countermelody on the violins:

Now listen to Andrew Downes' 'Gibraltar' and really get to know the tune:

Now listen to the last movement of his Third Symphony. A very similar tune is used and developed to sound very similar to plainchant beginning at 1:59. Which instruments play this tune and how is it similar to 'Gibraltar'? Describe the other music surrounding this melody and how it provides a clear contrast with it.

Andrew Downes has written a number of other works that have been inspired by sacred texts.

His Sacred Mass for Solo Unaccompanied Violin consists of a spiritual movement for each movement of the Mass: 'Kyrie', 'Gloria', 'Credo', 'Sanctus', 'Agnus Dei'. Here is the 'Gloria' - listen out for the plainsong-like melodies:

'The Last Trumpet', a work for solo unaccompanied trumpet, was specially composed for the BBC Radio 3 programme, The Offering of Life, by the Rev Canon Denis Claringbull, recorded in St. Paul's Church, Hockley, Birmingham, and broadcast on the 3rd February 1991. The trumpet soloist was Garry Page.

The final movement of his Five Dramatic Pieces for Eight Wagner Tubas is entitled 'Jubilate', the title of the 100th Psalm in the King James Bible:

In his Sonata for Two Pianos he turned mainly to the Old Testament and particularly to the Psalms for his inspiration to depict the the tribulations and persecution suffered by the Jews throughout their history.

The opening of the work is inspired by Psalm 10 verse 1:

“Why standest Thou afar off, O Lord, why hidest thou thy face in times of trouble?”

The music begins full of yearning and has at the same time a Jewish character, due to the use of Jewish modes/scales. A more comforting mood then takes over, inspired by Psalm 69 v.33:

“For the Lord heareth the poor and despiseth not His prisoners.”

The movement moves into a long, energetic and agitated section before the yearning of the opening re-emerges. The end of the movement is full of pathos, but at the same time optimism.

Andrew Downes has written numerous religious works for choirs with or without organ, large-scale oratorios with orchestra and soloists, and smaller-scale cantatas with piano. They can all be found at andrewdownes.com

Back to Andrew Downes: English Composer