Dramatic Cantata in the style of a Greek tragedy, for treble, alto and bass soloists, SATB chorus and piano. 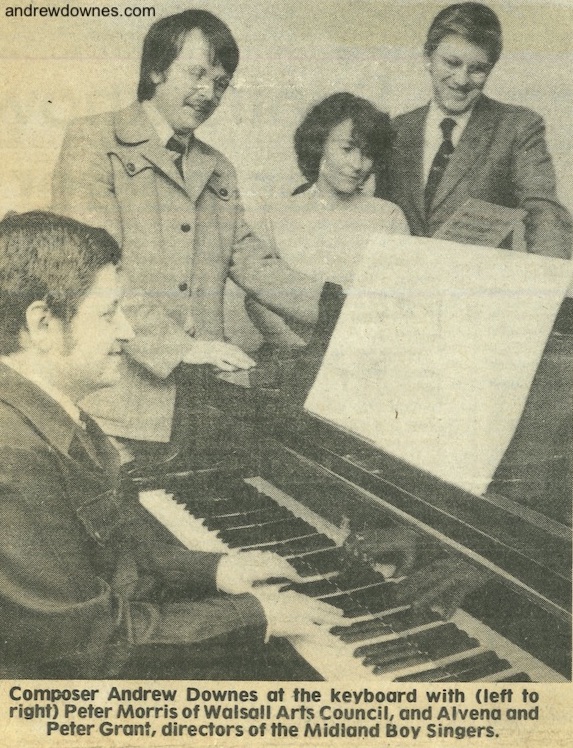 More information on Cain and Abel

An account by his wife and publisher, Cynthia Downes, posted on October 17th, 2020

This work was commissioned to celebrate the 20th anniversary of the foundation of the Midland Boy Singers in 1961 by Peter and Alvena Grant.  Andrew had been a founder member of this excellent choir. Alvena Grant, who was a teacher at Andrew's school in 1961, spotted Andrew's lovely treble voice and invited him to join her newly formed boys' vocal group. Andrew sang with them from the age of 11, first as treble, then as counter tenor, until he was 18 and beyond. The Grants were always thrilled with Andrew's singing and composing. They even showcased him in their Wigmore Hall recital in 1969: 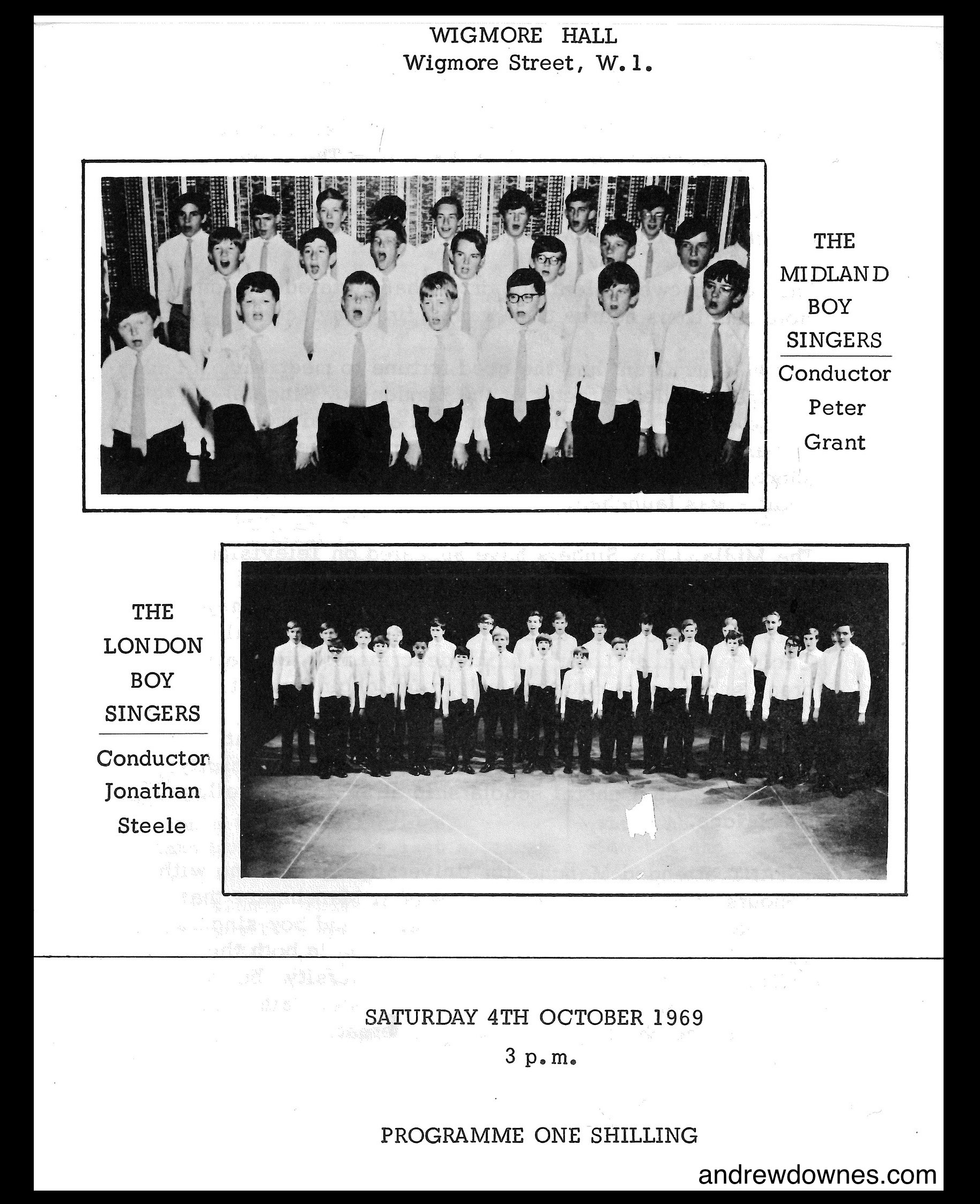 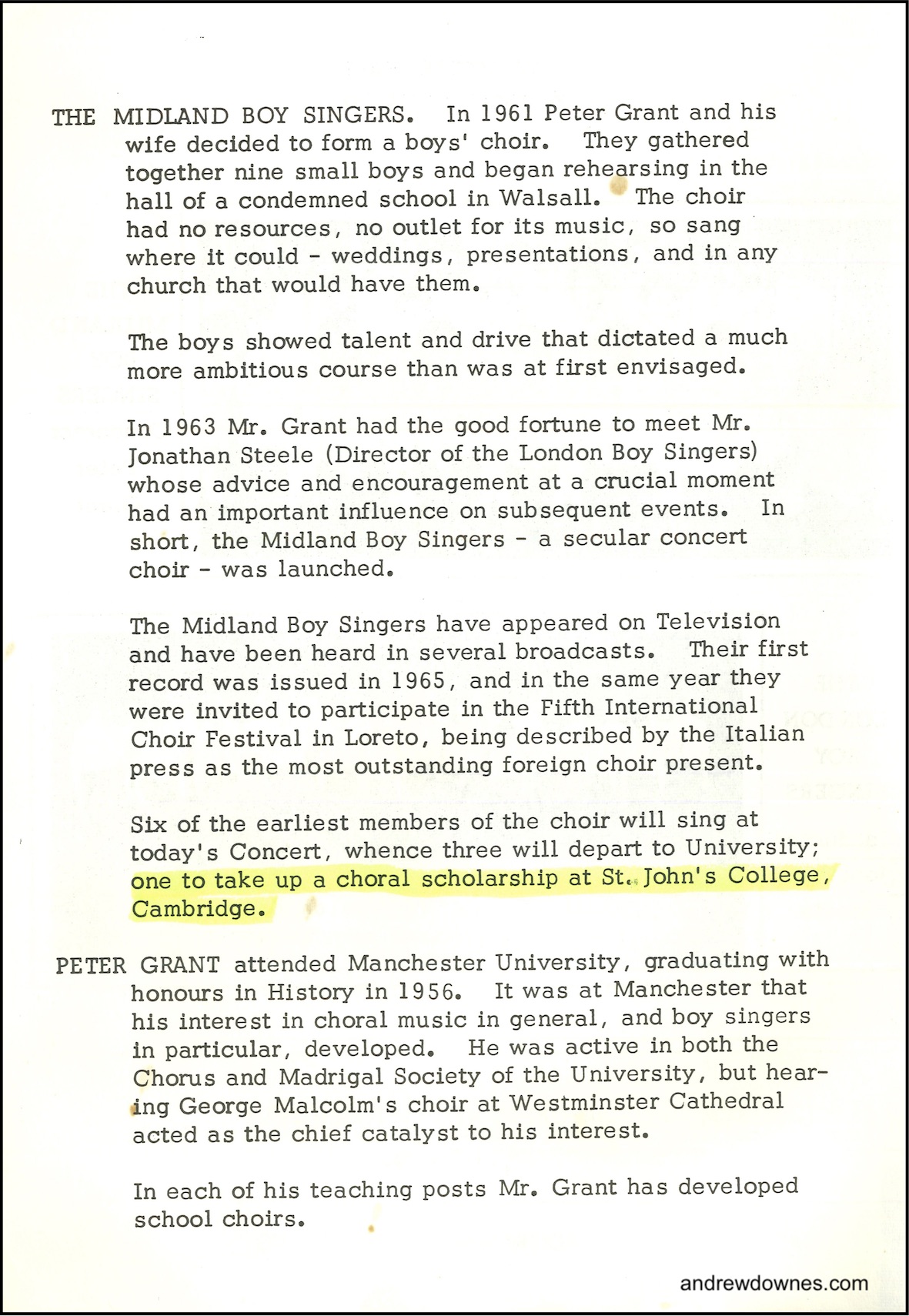 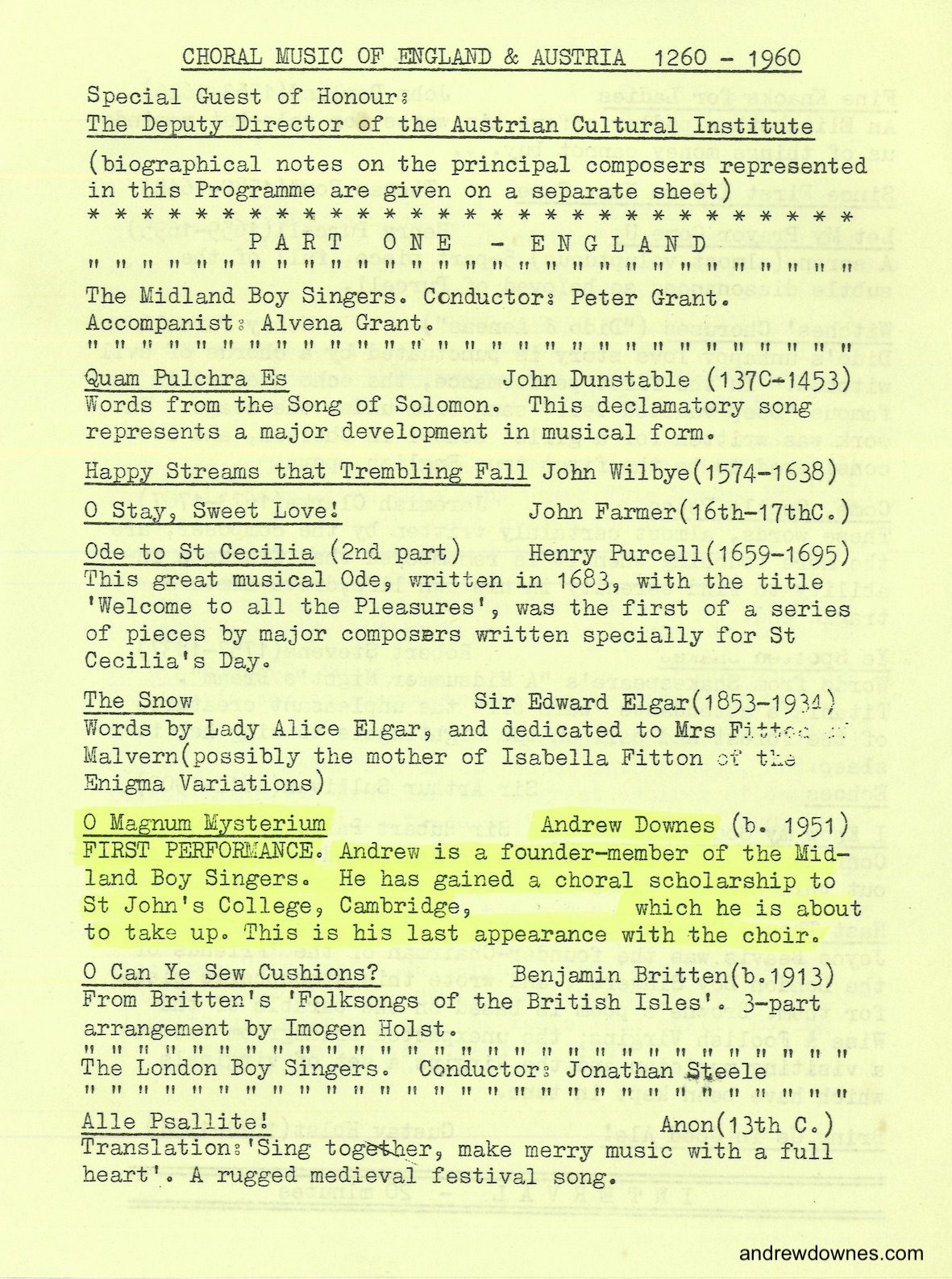 Programme for Midland Boy Singers concert at Wigmore Hall in 1969, featuring the music and singing of countertenor and composer Andrew Downes.

Peter and Alvena's training and encouragement helped Andrew gain his place as a Choral scholar in the Chapel Choir of St John's College, Cambridge. This review about him appeared in the Musical times the day after the Wigmore Hall concert:


'The single most striking feature of Saturday afternoon’s joint programme in the Wigmore Hall by the Midland Boy Singers (conductor Peter Grant) and the London Boy Singers (conductor, Jonathan Steele) was the counter-tenor singing of Andrew Downes. A founder member of the former choir, a choral scholar elect of St.John’s College, Cambridge, and the composer of an imaginatively meritorious setting of ‘O Magnum Mysterium’..., he could well be a figure to watch out for...'
THE TIMES

In 1982 Peter and Alvena asked Andrew for a work for the choir to perform on their 20th anniversary tour of Germany.  Andrew chose to write his second Dramatic Cantata for the occasion, this time the story of Cain and Abel. I played a large part in creating the libretto with Andrew for the work. I studied the biblical story and scribbled out the dialogue, which Andrew was free to adapt to his succinct musical style. We also altered the slant of the story, suggesting that Abel was the favourite of Adam and Eve, which caused the tension between the brothers. Abel's death was to be recounted by Cain as an accident following a quarrel.

I suggested a scenario based on a Greek tragedy, where the chorus, with a treble soloist, played the part of the conscience of Adam, pointing out where Adam had gone wrong with his sons.

The two main soloists were to be Cain, sung by a male alto and Adam sung by a bass/baritone.

The Midland Boy Singers, with soloists Roy Dickinson, Donald Young and Richard Green, accompanied by Alvena Grant (piano) and conducted by Peter Grant, first performed the cantata on 22nd August 1981 in the Kaiser-Willhelm Gedaechtniskirche, Berlin, on their tour of Germany.
Andrew flew over for the performance. I was unable to go because our daughters, Anna and Paula, were too young.

You can listen to the performance here:

Press before the performance: 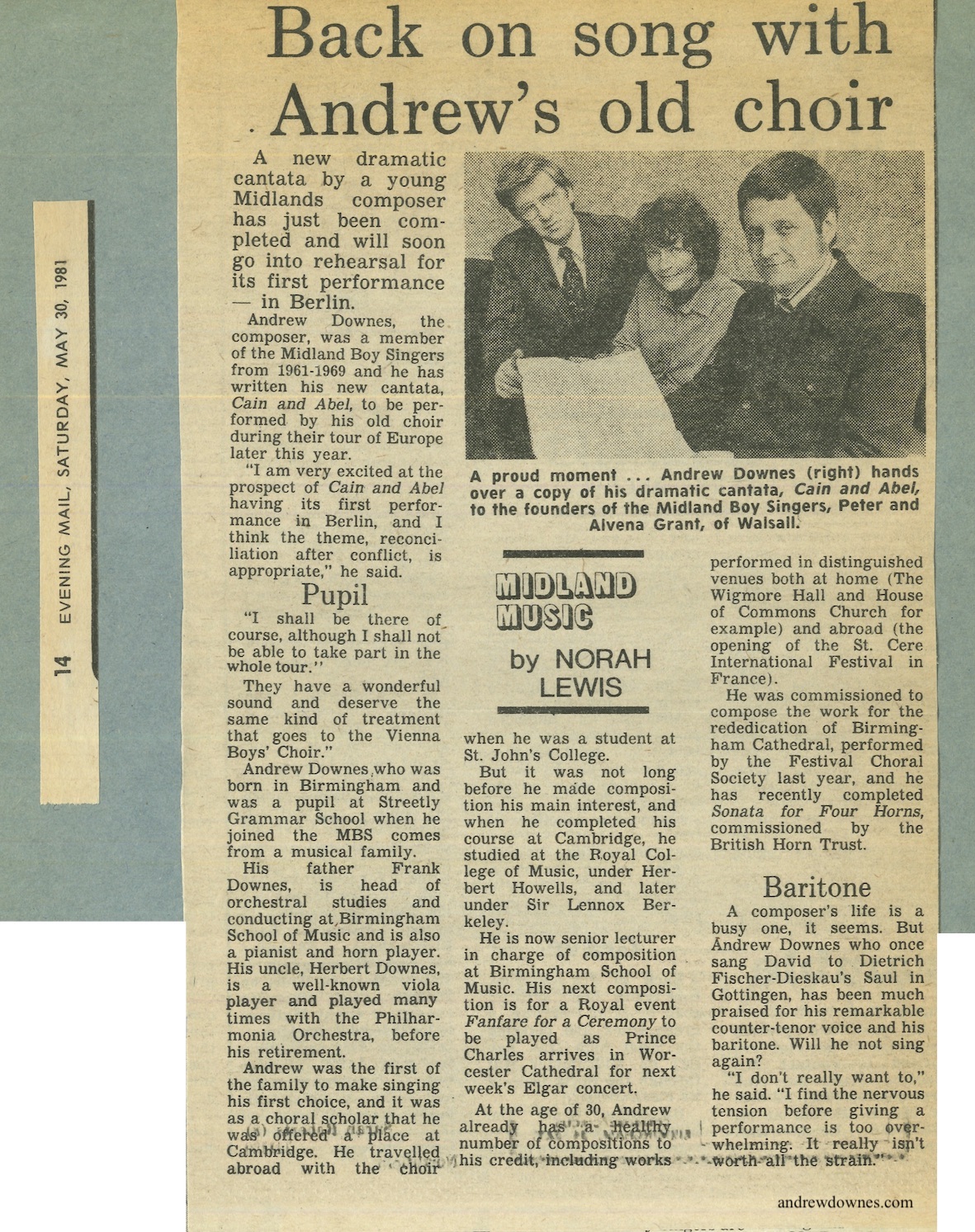 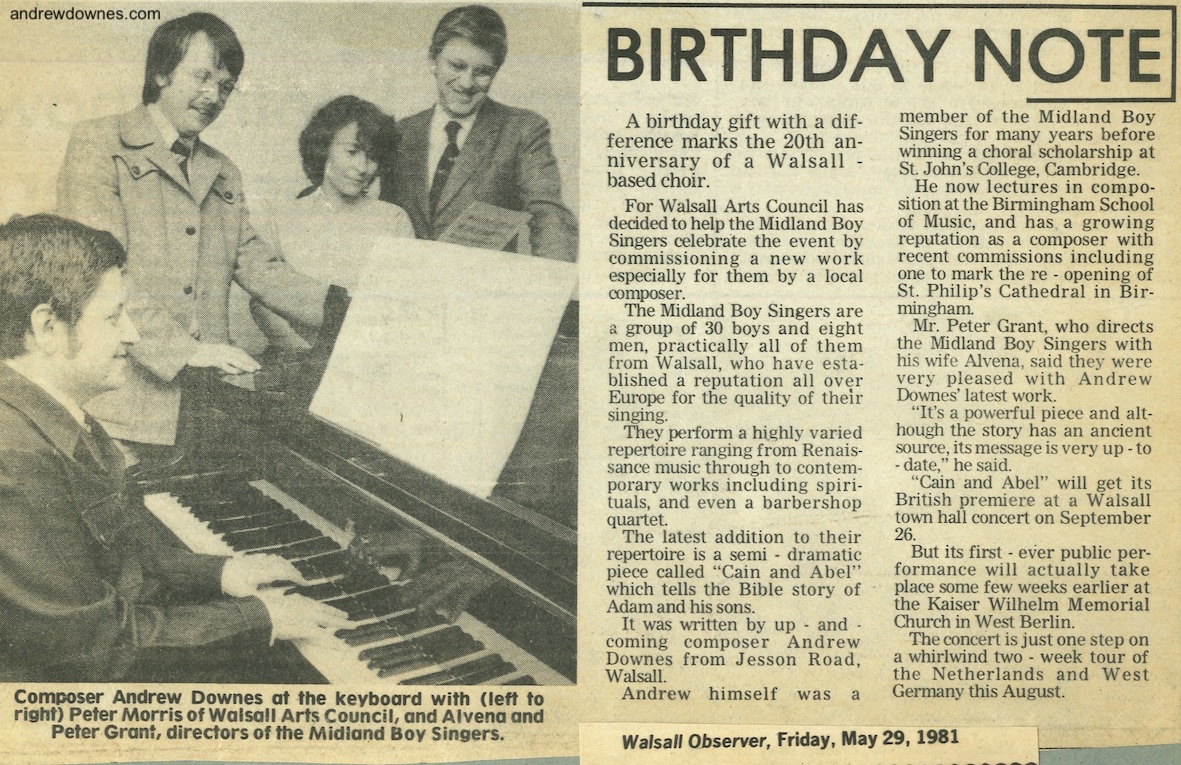 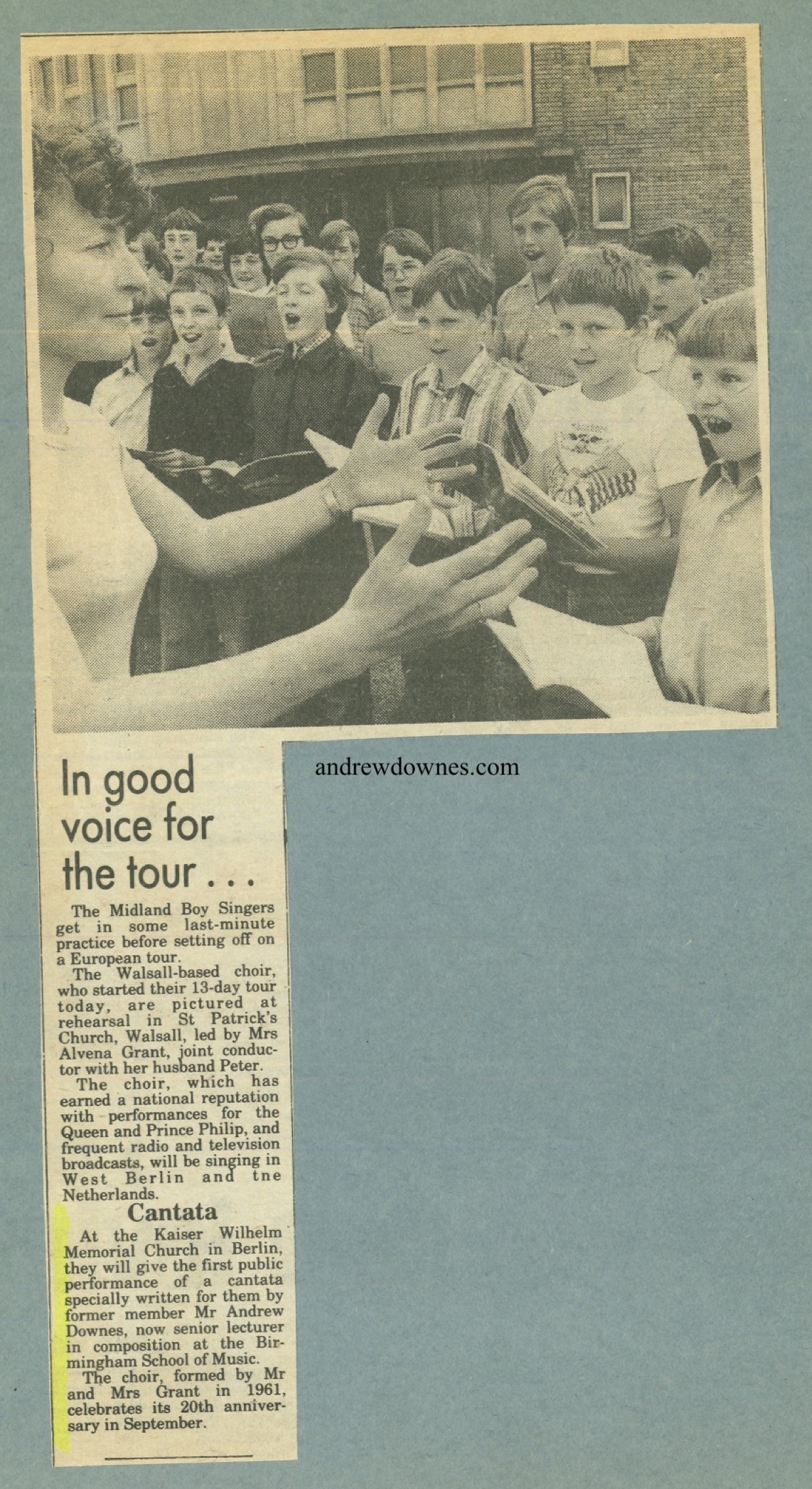 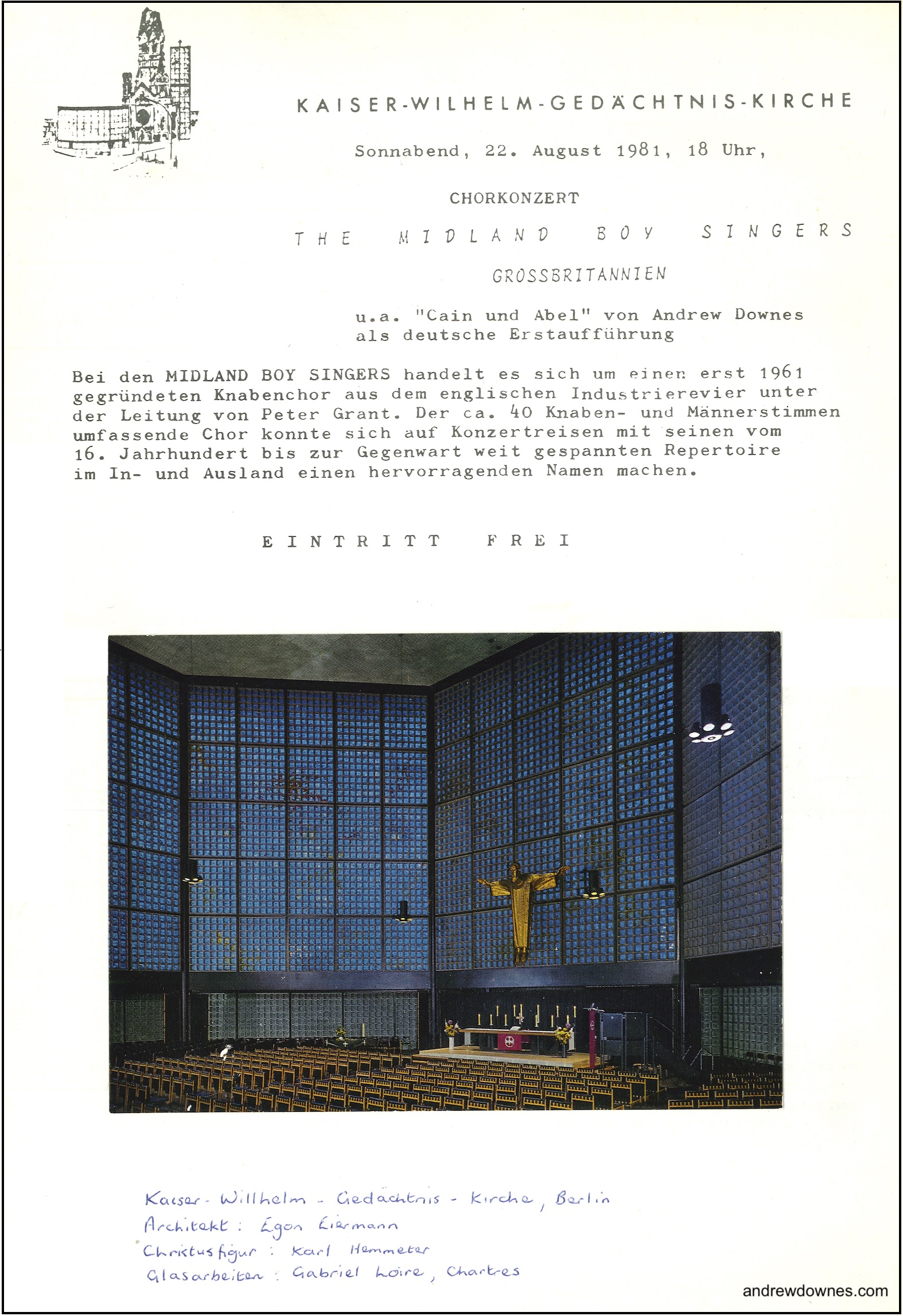 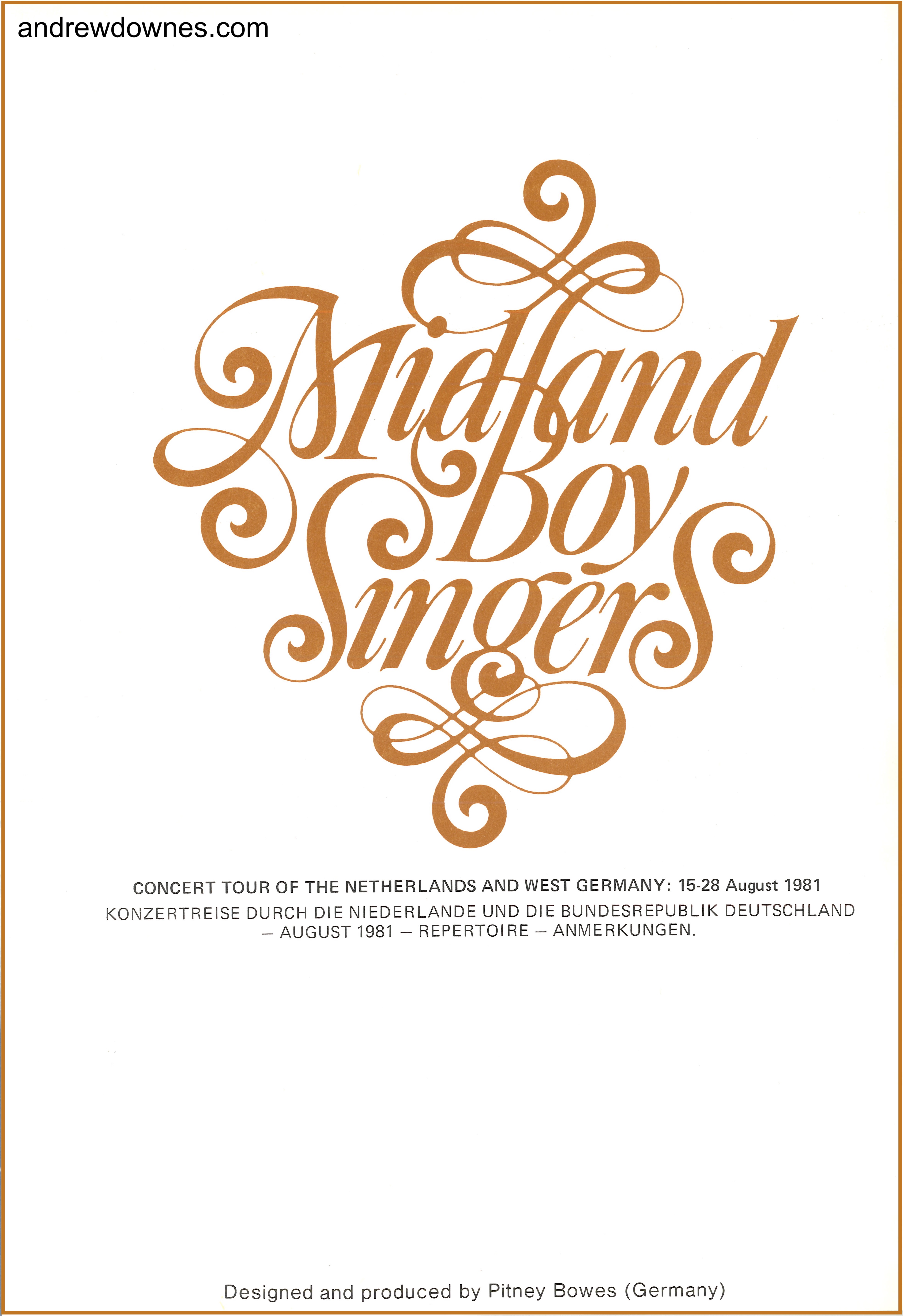 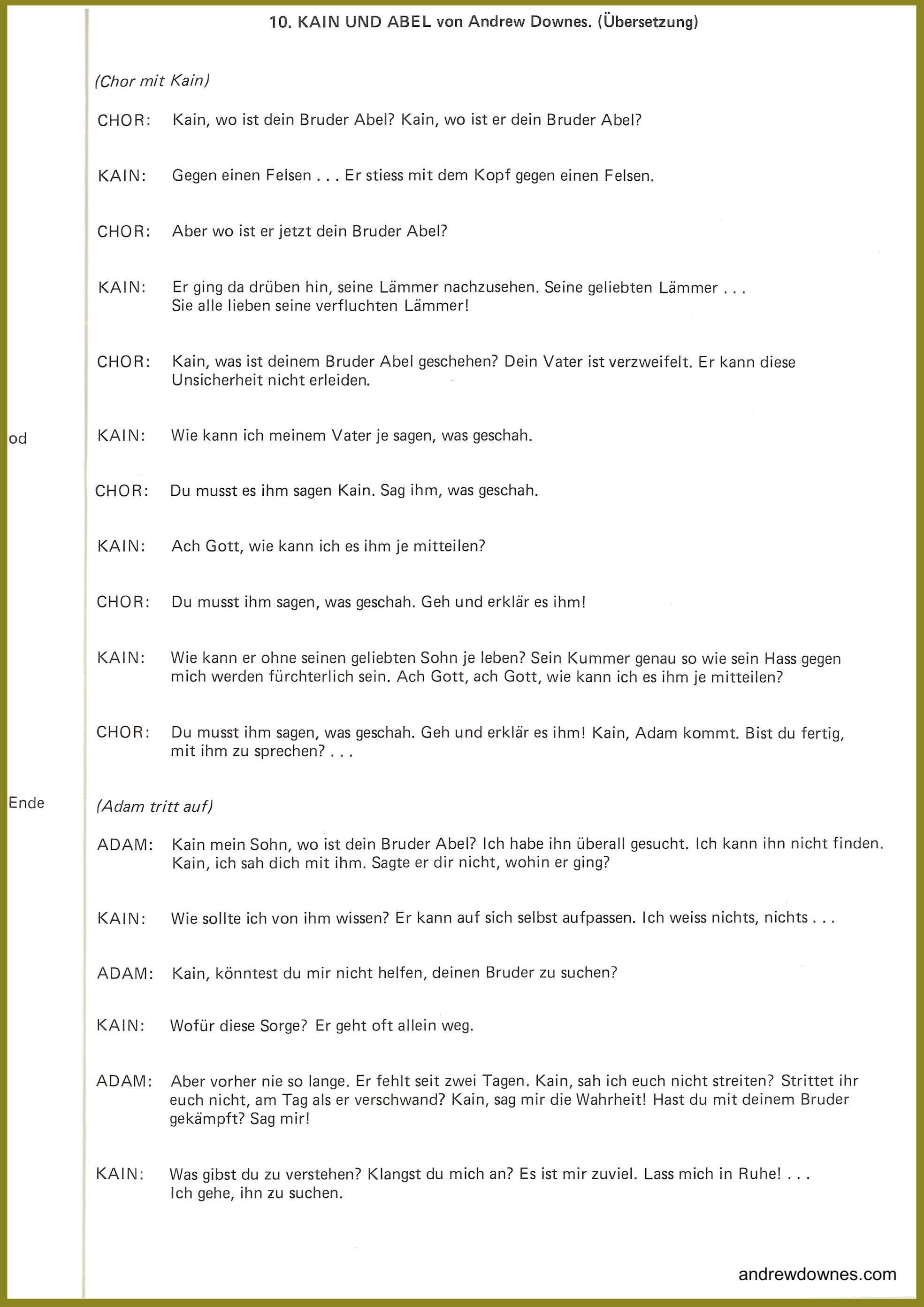 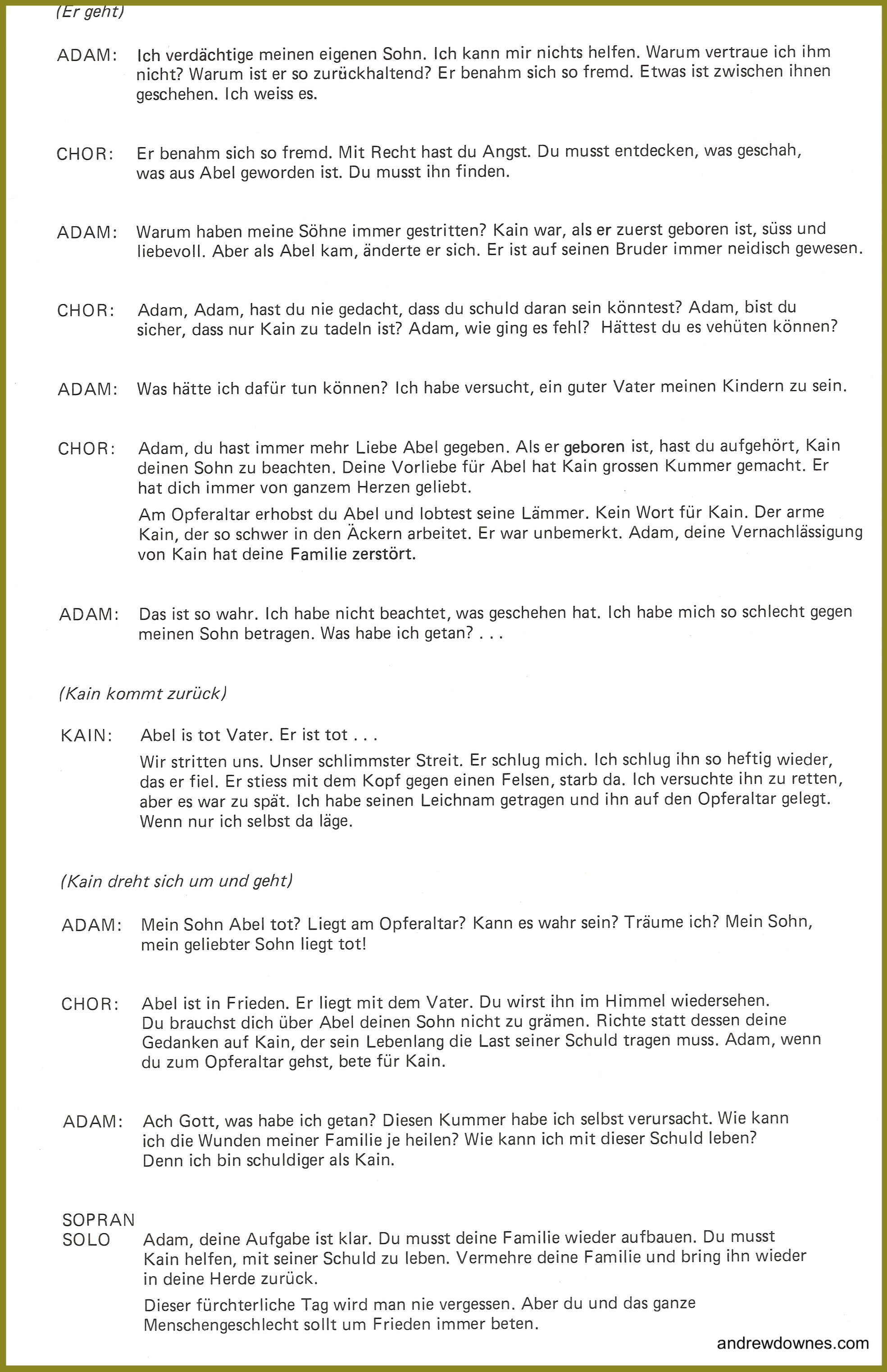 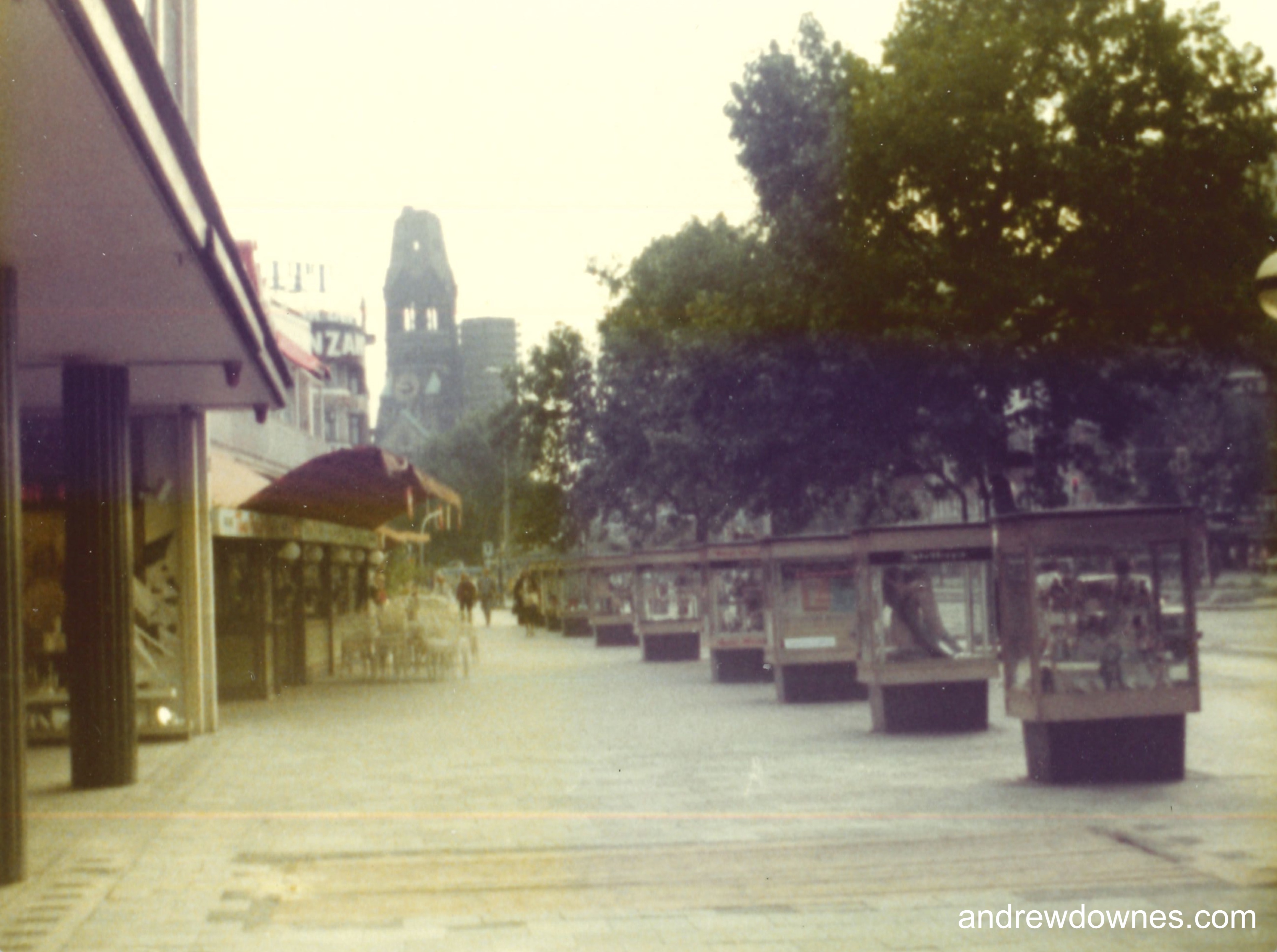 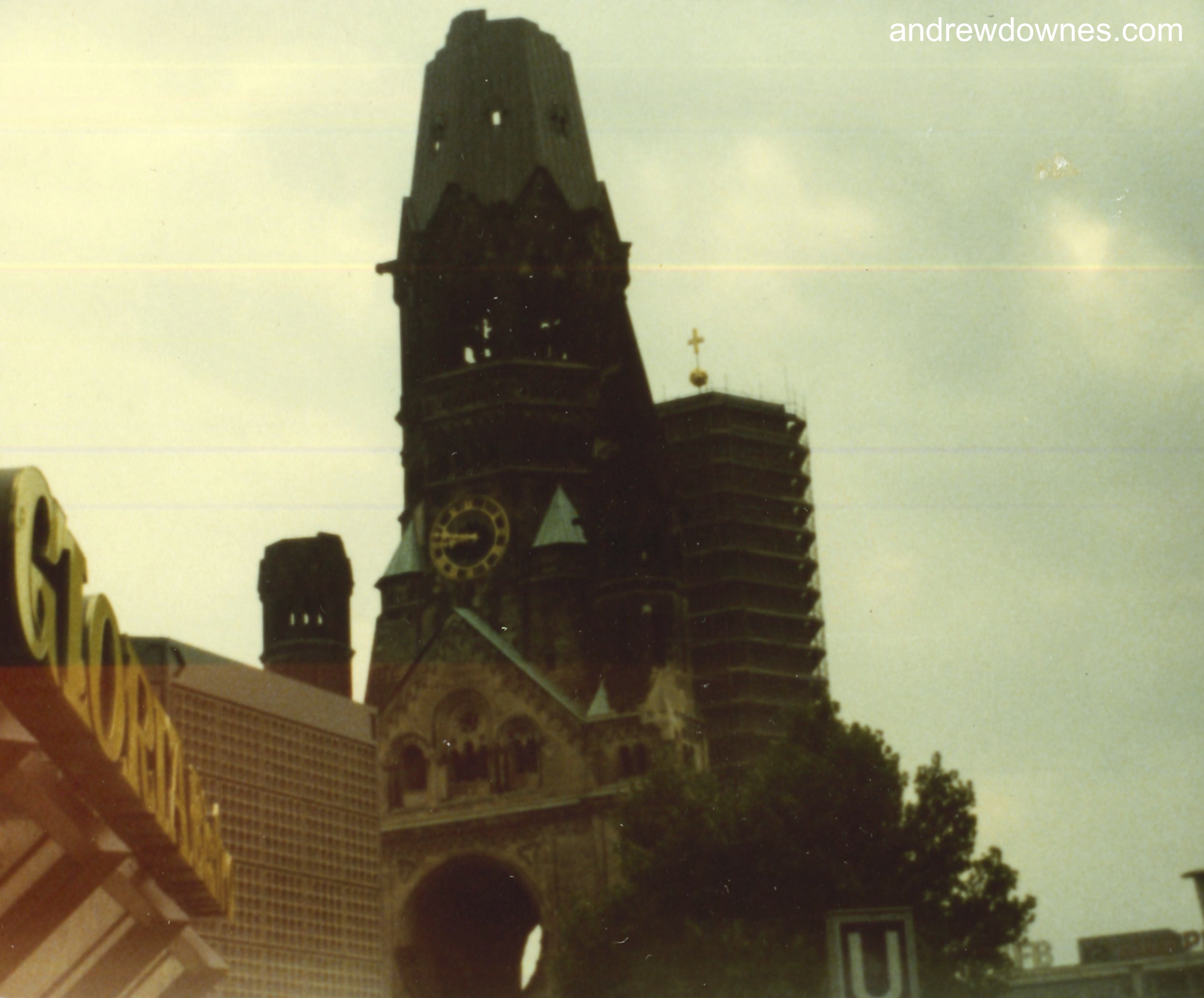 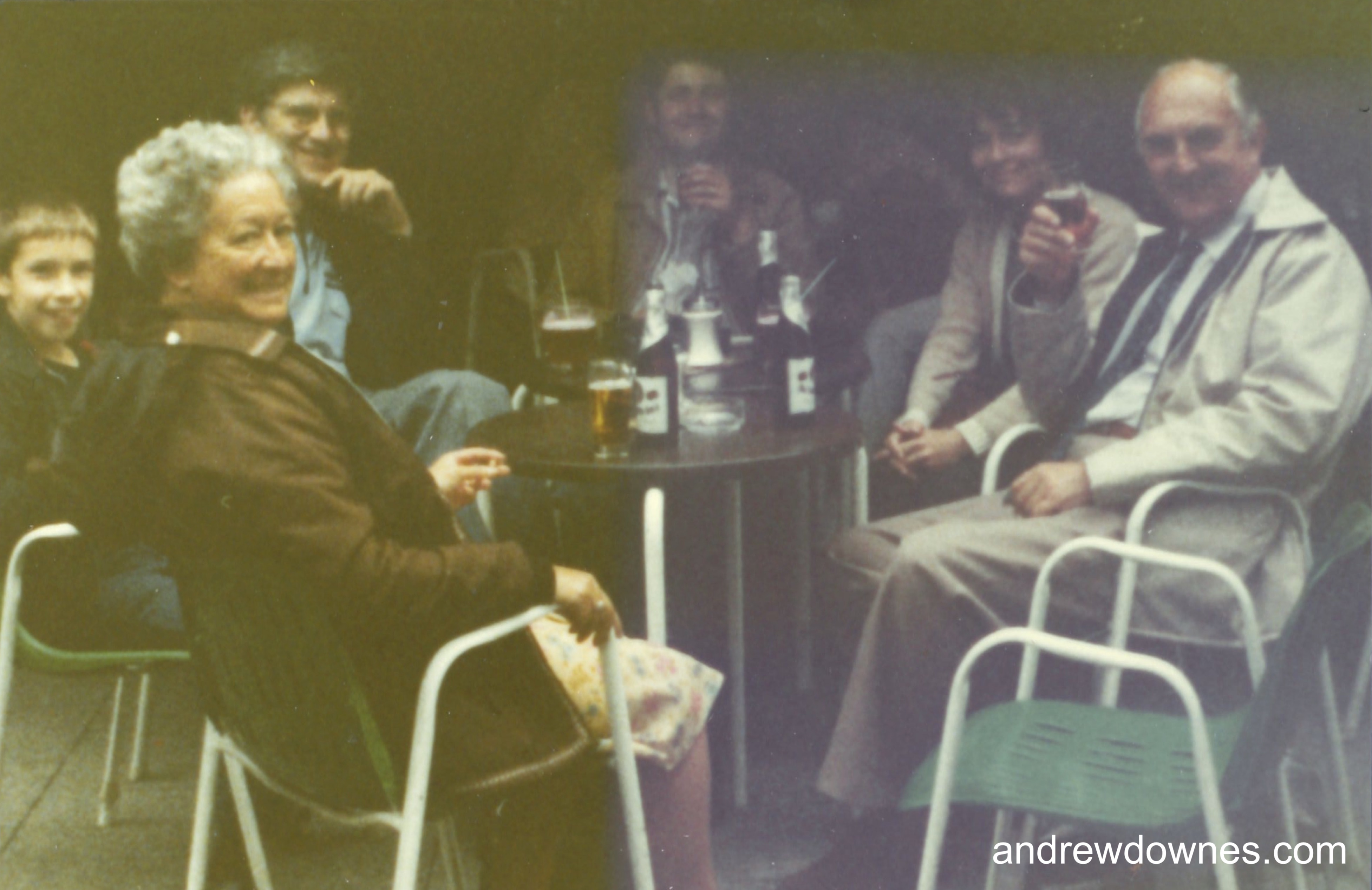 ABOVE: Andrew in the middle 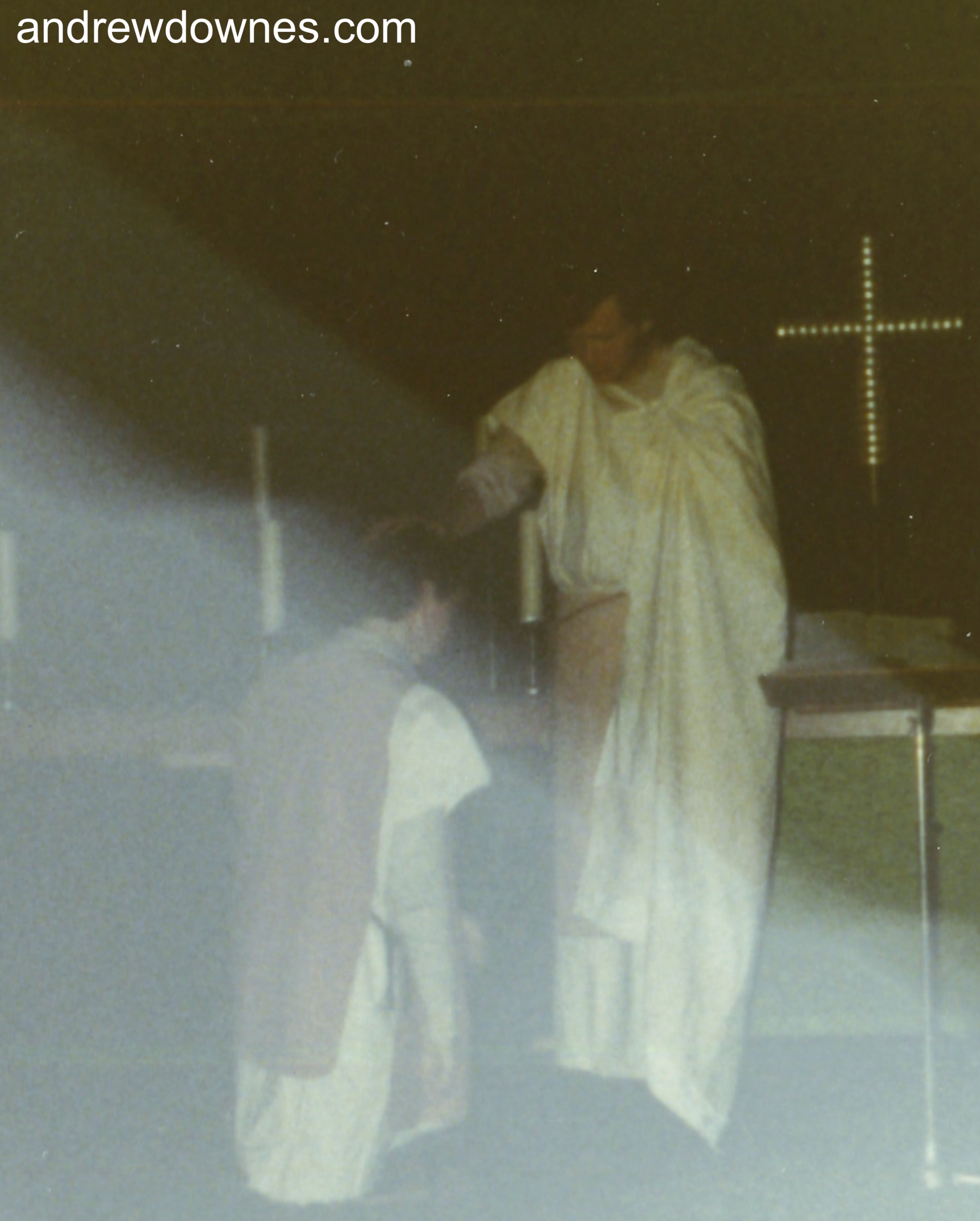 The British premiere was given by the Midland Boy Singers in their home-town, Walsall (the Town Hall, September 1981), which I was delighted to be able to attend. 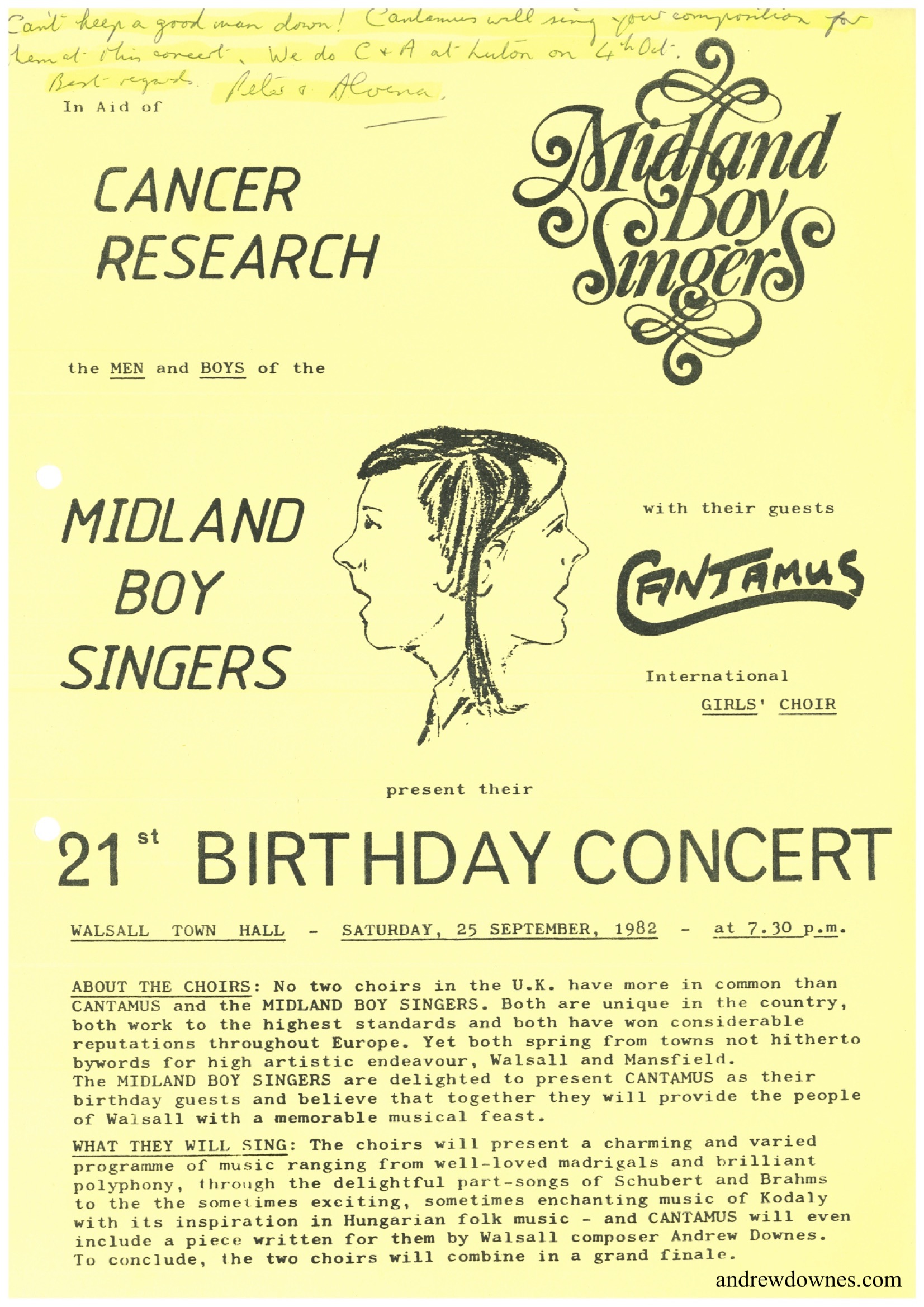 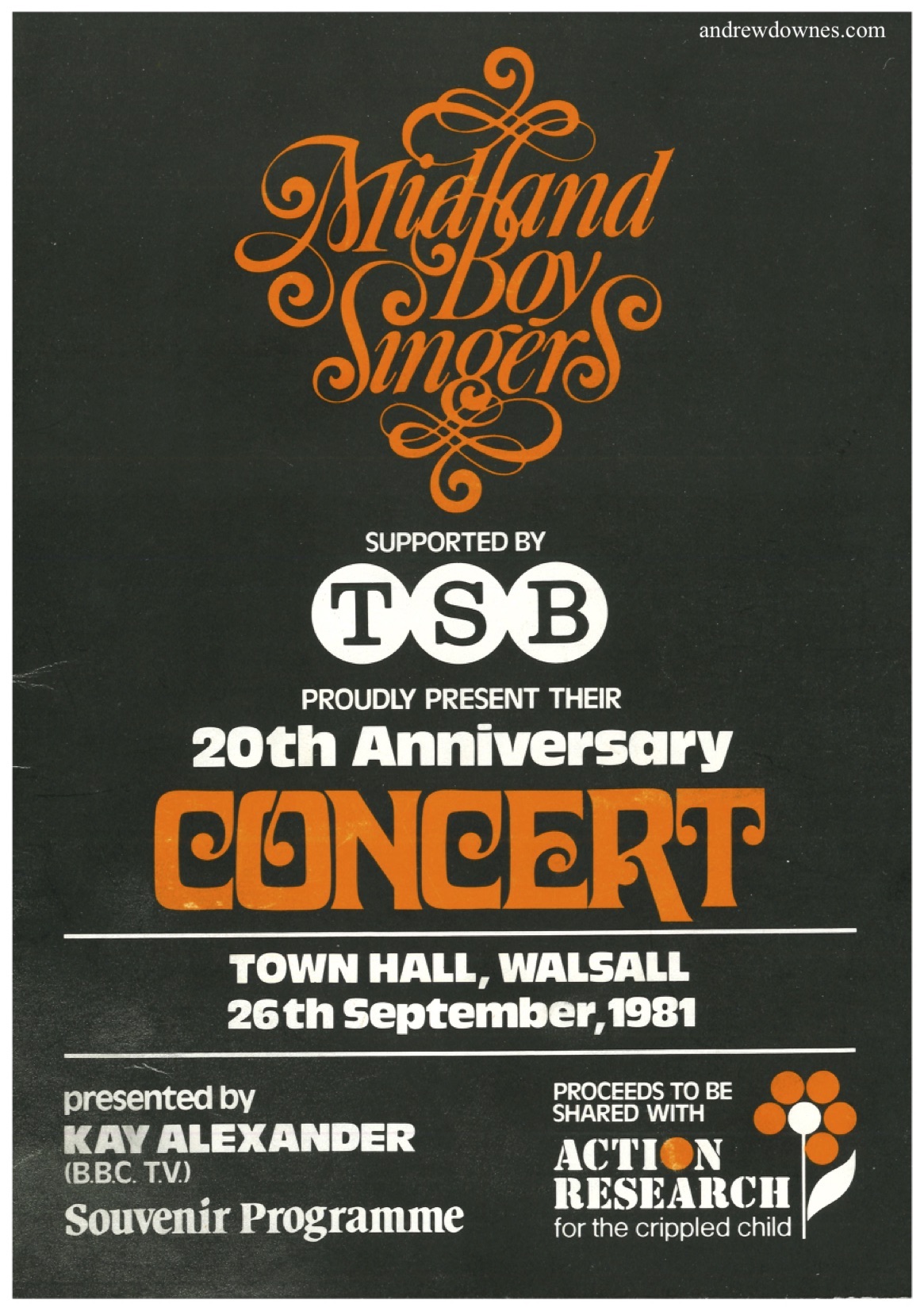 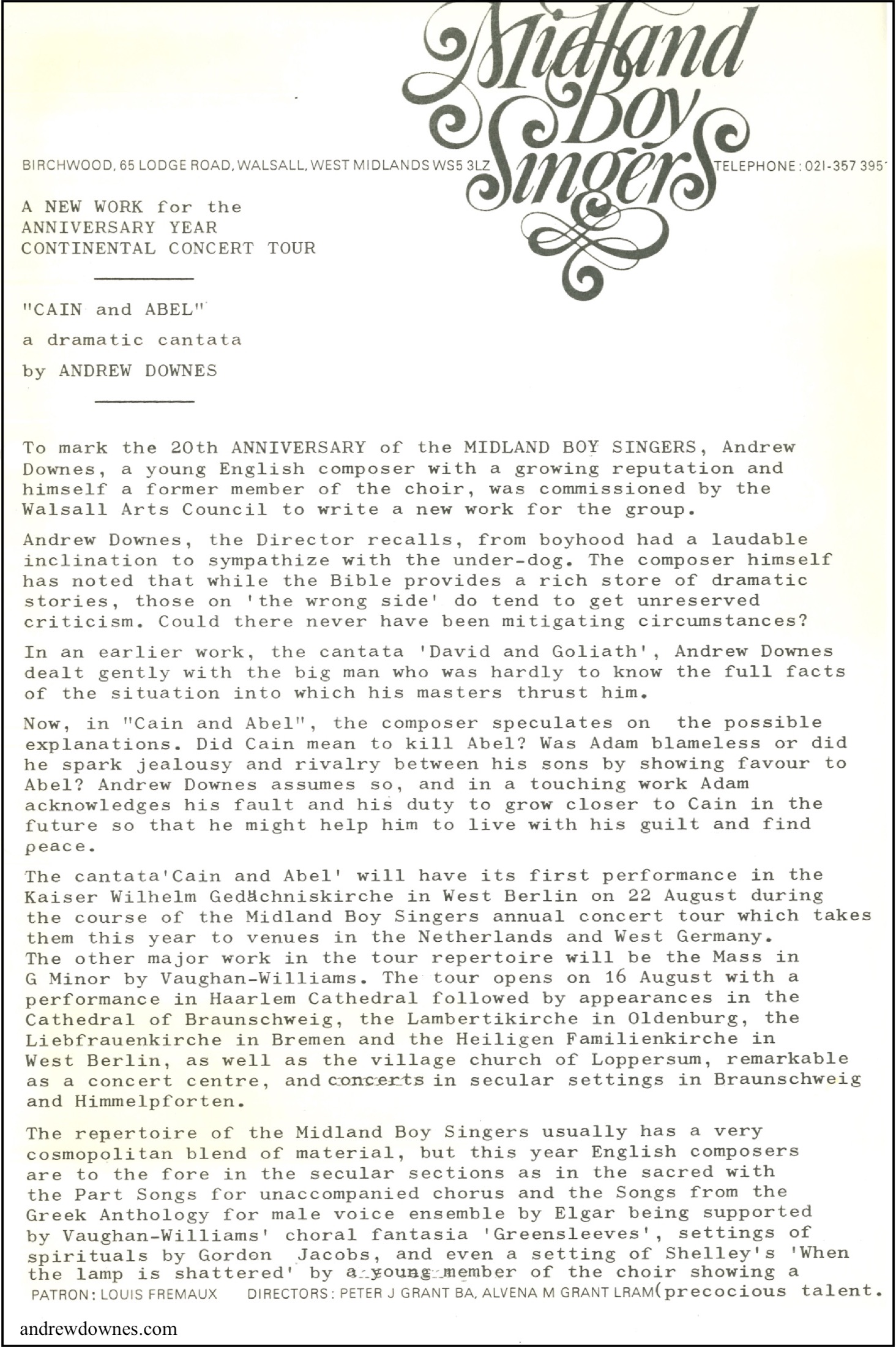 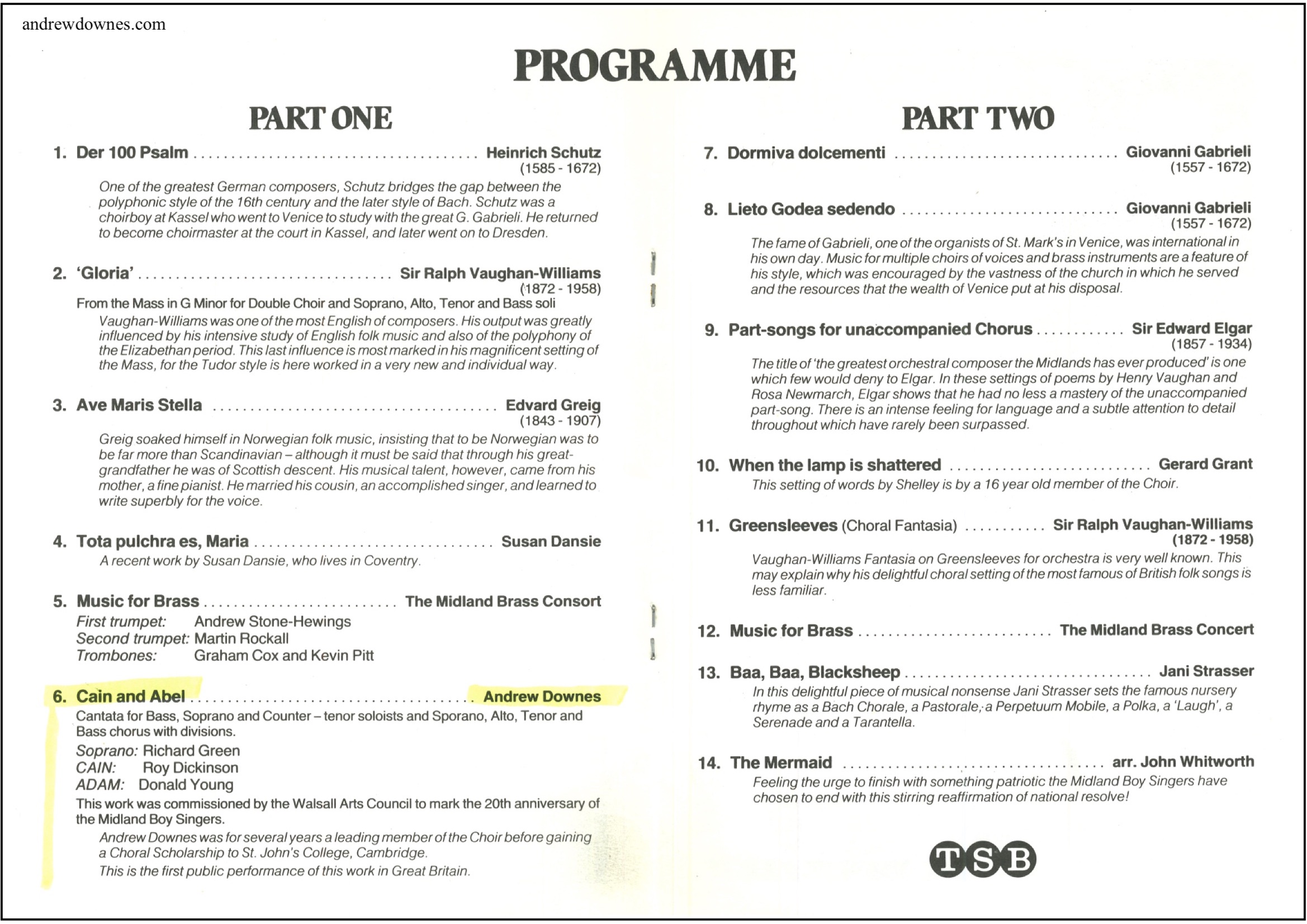 Here is an extract from the Walsall performance (Richard Green is the treble soloist, accompanied by Alvena Grant):

An extremely pleasing comment appeared in the Musical Times after the Walsall performance:
'Like all Downes' music, it was admirably conceived for the medium.'
THE MUSICAL TIMES 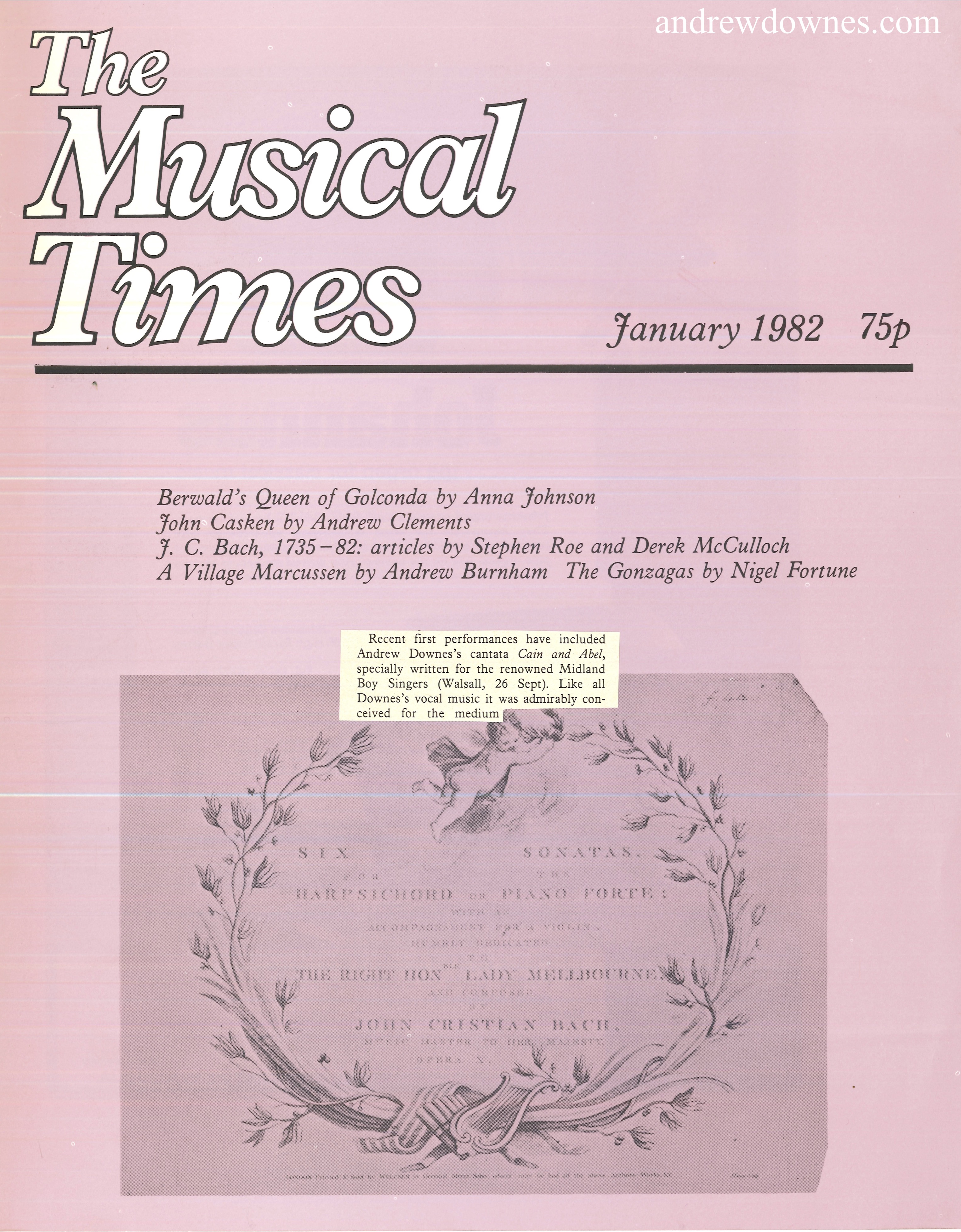 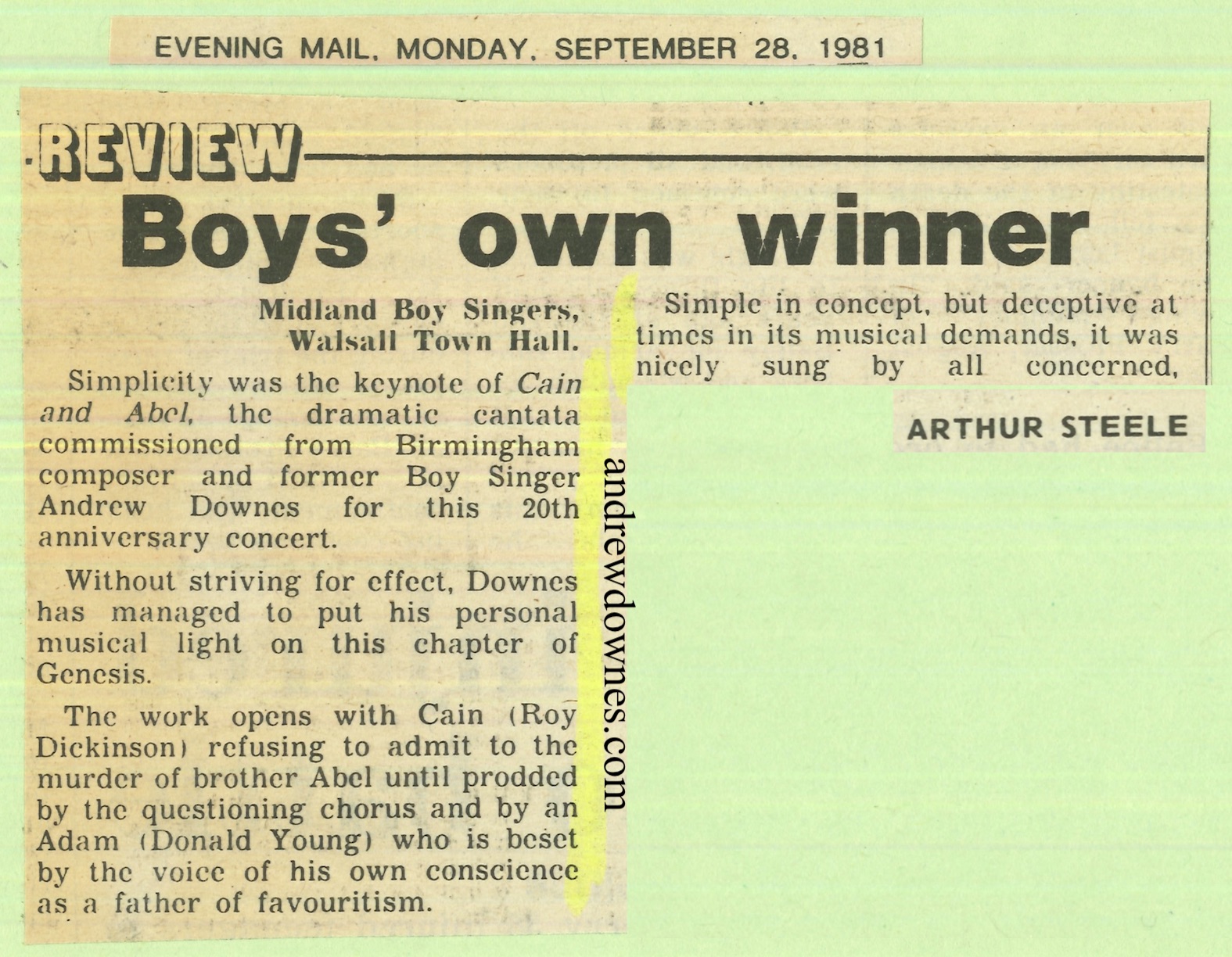 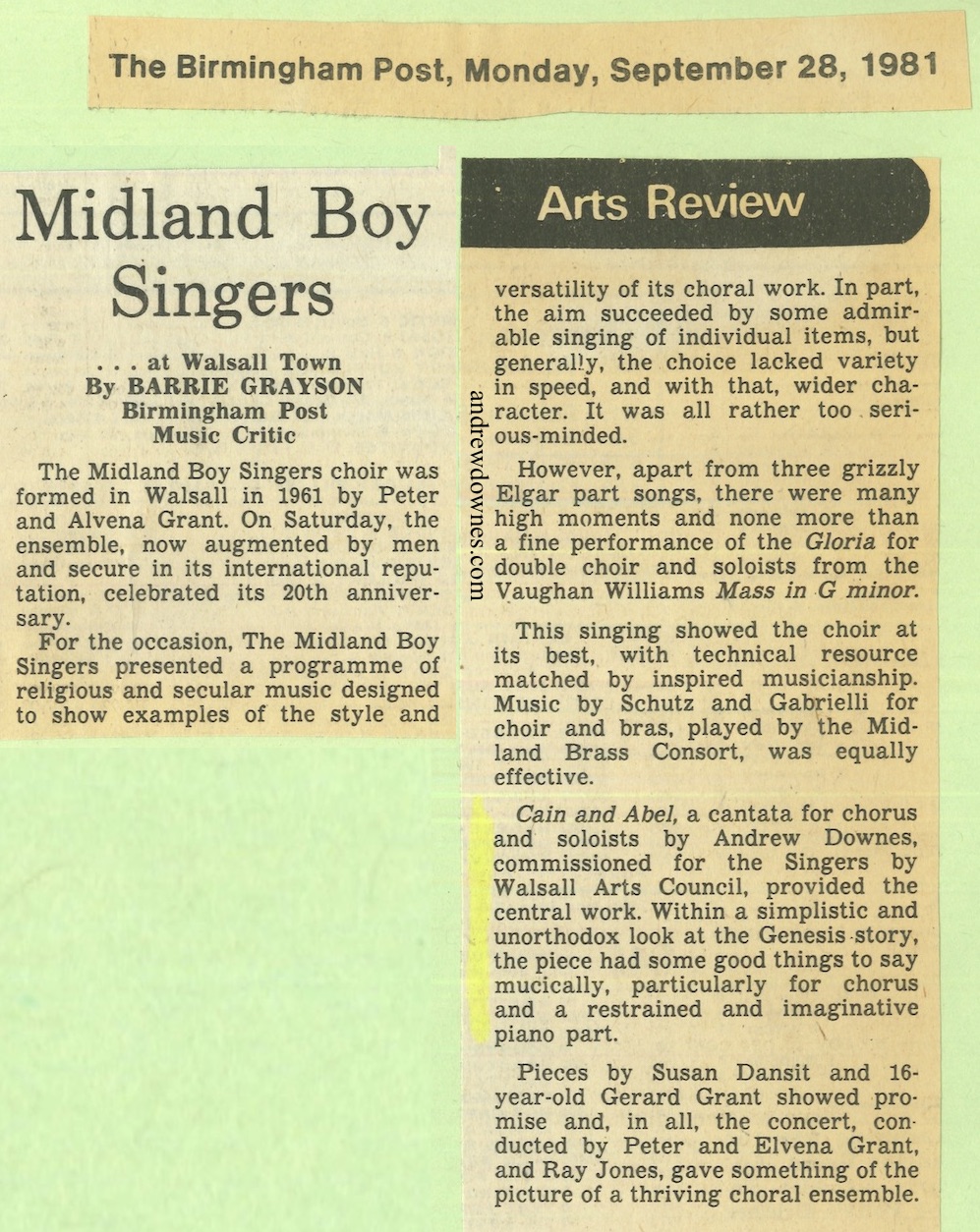 They gave a further performance in Luton (October 1982).

Later, students of Andrew's School of Creative Studies at Birmingham Conservatoire put on a further, stunning performance in the Adrian Boult Hall, as part of the Festival of New Music and Art in December 1989. 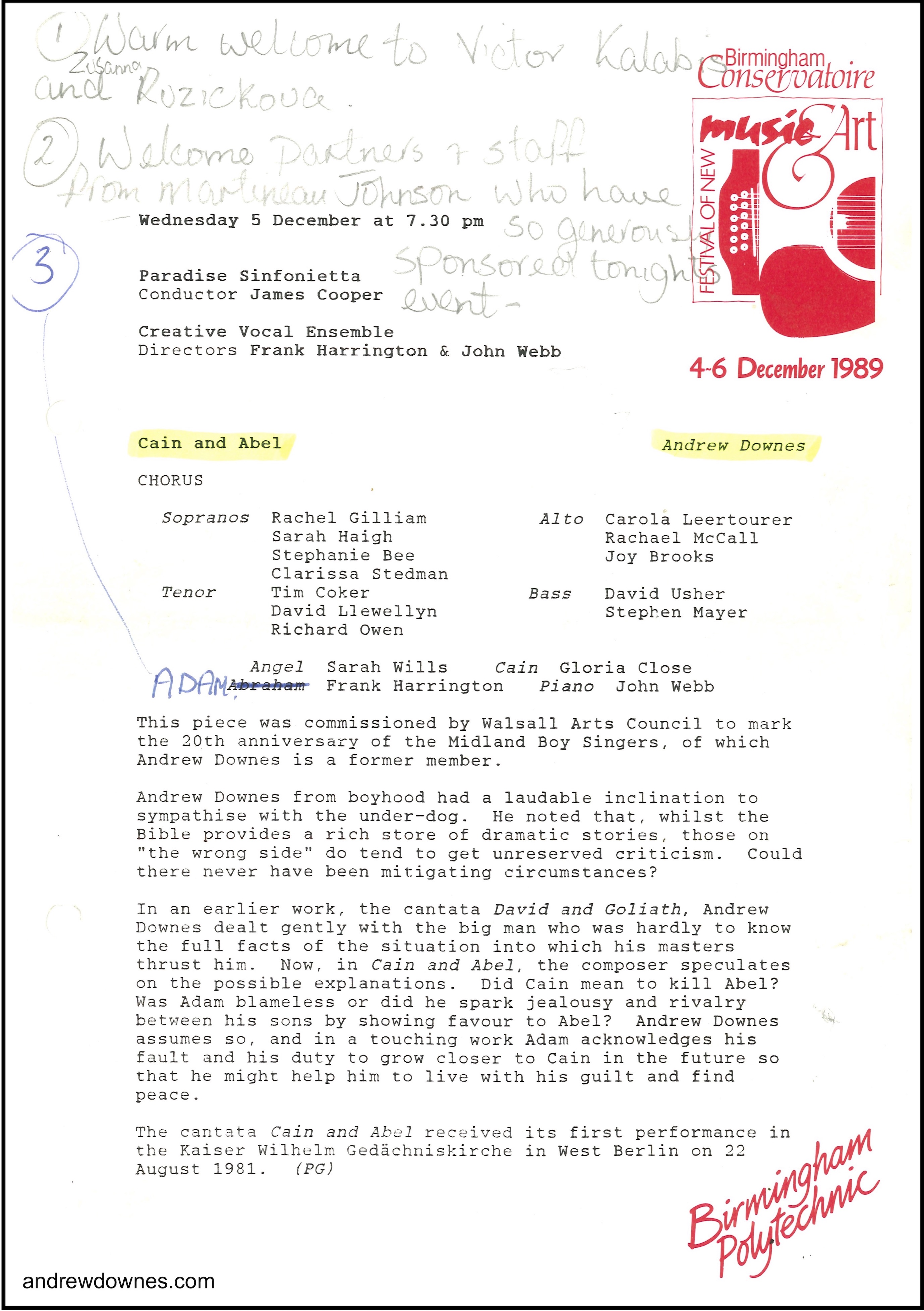 MBS
I was fascinated to read the article about the history of Cain and Abel. I sang with the MBS from 1972-1989 and was part of the performance in Germany. …