The premiere and subsequent performances of The Marshes of Glynn 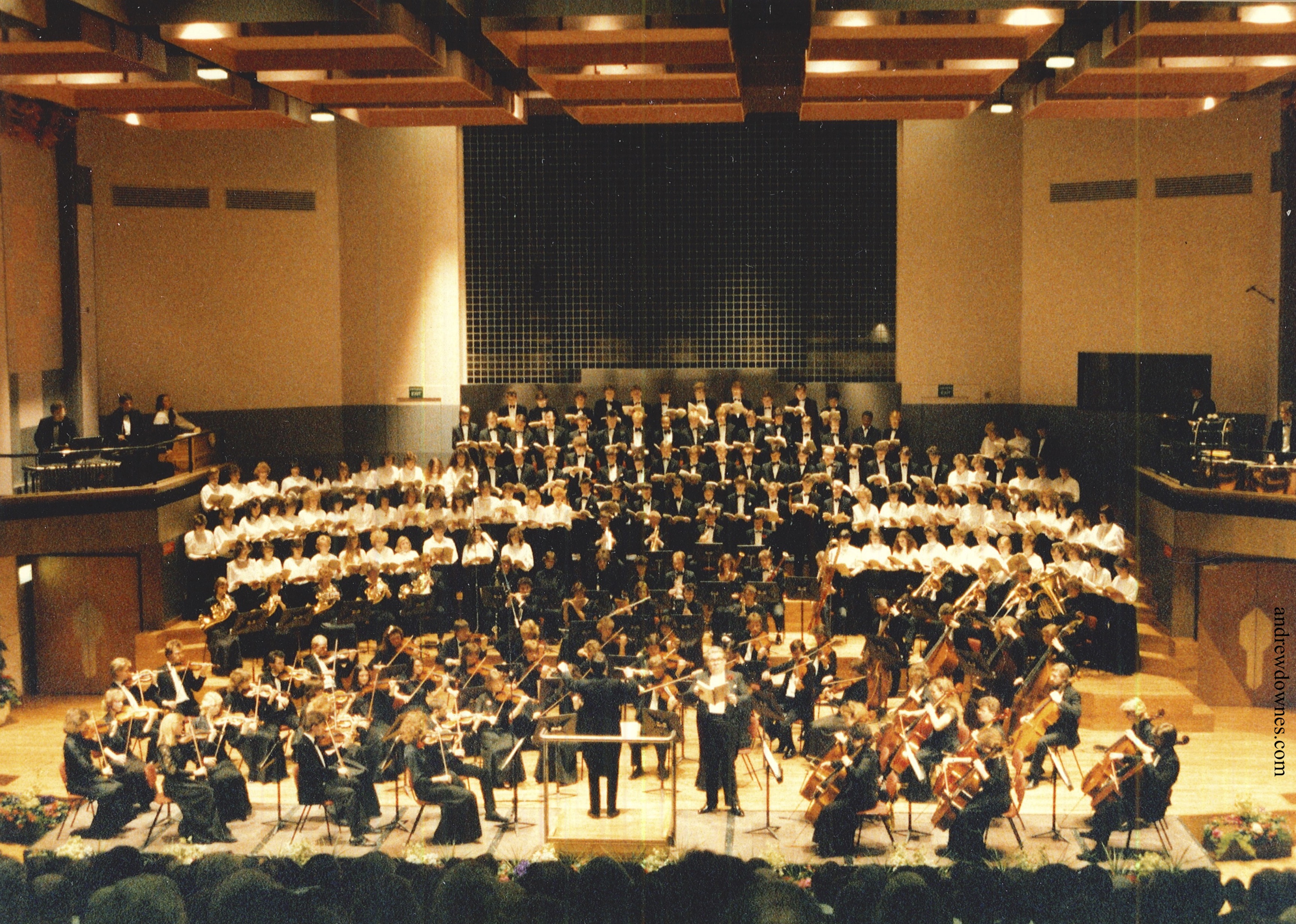 An account by his wife and publisher, Cynthia Downes, posted on February 1st, 2018

This work will always be one of my all time favourites.  It was composed for the Royal Opening of the Adrian Boult Hall and to mark the Centenary of the Birmingham School of Music (now Royal Birmingham Conservatoire).

The School of Music asked for a 4 minute work, but Andrew was determined to make his mark on the Centenary more than that, especially as the College was also commissioning a much longer work from composer Derek Bourgeois, to be performed in Birmingham Town Hall!

Andrew's first task was to find a text.  He turned to my Dad, who loved poetry, for suggestions.  My Dad introduced him to the works of Sidney Lanier and Andrew was immediately moved by the lyricism of this poet.

From the first line of The Marshes of Glynn, Andrew was inspired, and I in my turn was bowled over by the beautiful music he was creating.

Each day Andrew played me the next section he had written.  By the end I knew the work extremely well.

When Andrew's parents came over, I was determined that they should get as good an idea of the piece as possible, so, as Andrew played the work to them on the piano, I sang the soprano line.  His Dad, Frank Downes, then Head of Orchestral Studies at the School of Music, was, to my amazement, impressed by my singing, and recommended that I should sing in the first performance with the Birmingham School of Music Chorus.

I loved going along to the rehearsals, directed by Damian Cranmer.  The choir were extremely taken with the work.  There was a real buzz as we approached the premiere.  Everyone knew that this was going to be something special.

John Mitchinson, tenor soloist, the choir and the orchestra gave a flawless first performance.  The audience reaction was rapturous.  Andrew had to keep coming up to the stage to take bows.  This performance was so perfect that it was made into an LP record, which sold like hot cakes. 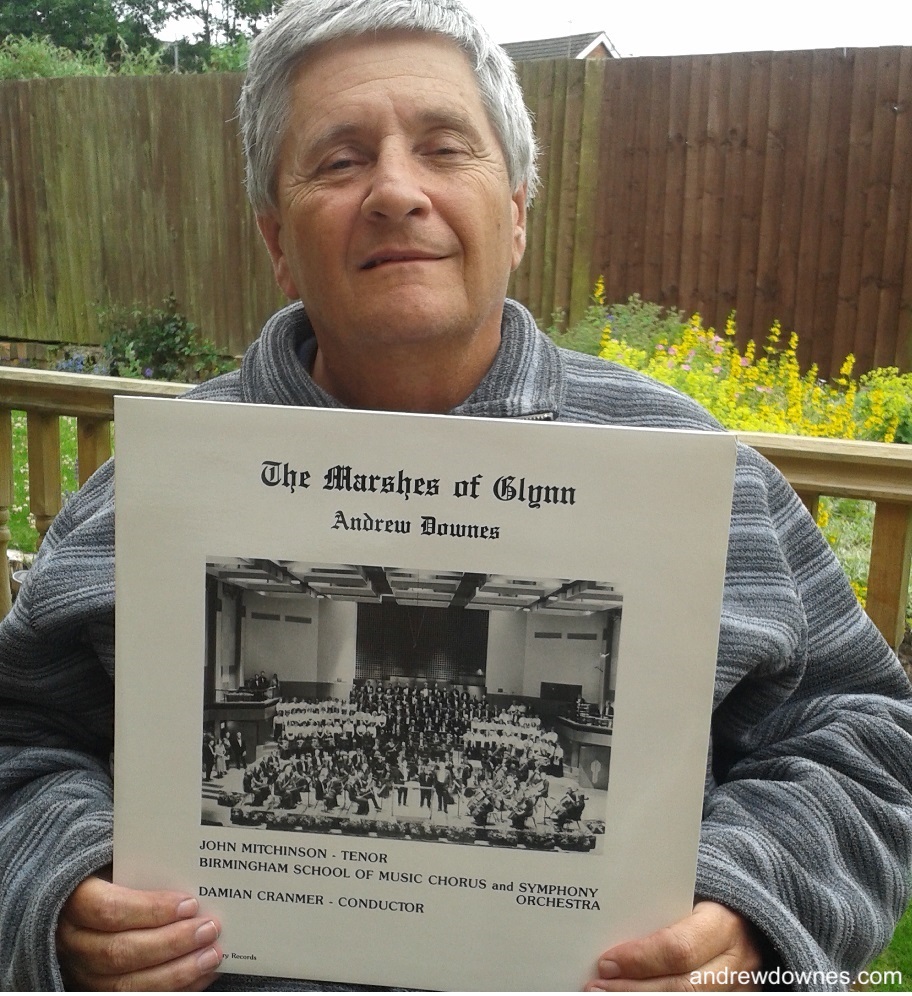 By popular request a second performance was given in the Adrian Boult Hall by the same musicians and also one in Birmingham Cathedral by the Birmingham Festival Choral Society, directed by Jeremy Patterson, at which Andrew had people queuing up for his signature on their LPs!

Over the years the recording has been made into several editions of CDs, which have continued to sell.  We put the recording on YouTube too.

The night of the premiere of The Marshes of Glynn was one of the greatest experiences of my life.

I used to be a migraine sufferer.  I would lie in a darkened room and ask Andrew to play the LP of The Marshes of Glynn.  It totally soothed my pain.

Andrew's ankylosing spondylitis has caused him suffering all his life.  I realised that his uplifting composing was a way of alleviating his own pain.

Andrew's colleague and best friend, David Brock, kept the work alive throughout his own life (He himself died tragically and suddenly at the age of 67 in 2015) with his jokes about the Marshes of Glynn, which he called 'The Bogs of Bognor'!  On Christmas cards and postcards sent from his travels examining and recruiting for Birmingham Conservatoire, David Brock always linked the cards with The Marshes of Glynn.  A post card which he sent from Australia had a picture of Aborigines pulling faces. David wrote, "This was the reaction when I announced that I was going to play the CD of The Marshes."  On the front of a Christmas card with robins on a branch looking in all directions, he wrote, "The audience at the outdoor premiere of The Marshes of Glynn was somewhat inattentive."

Souvenirs of the event: 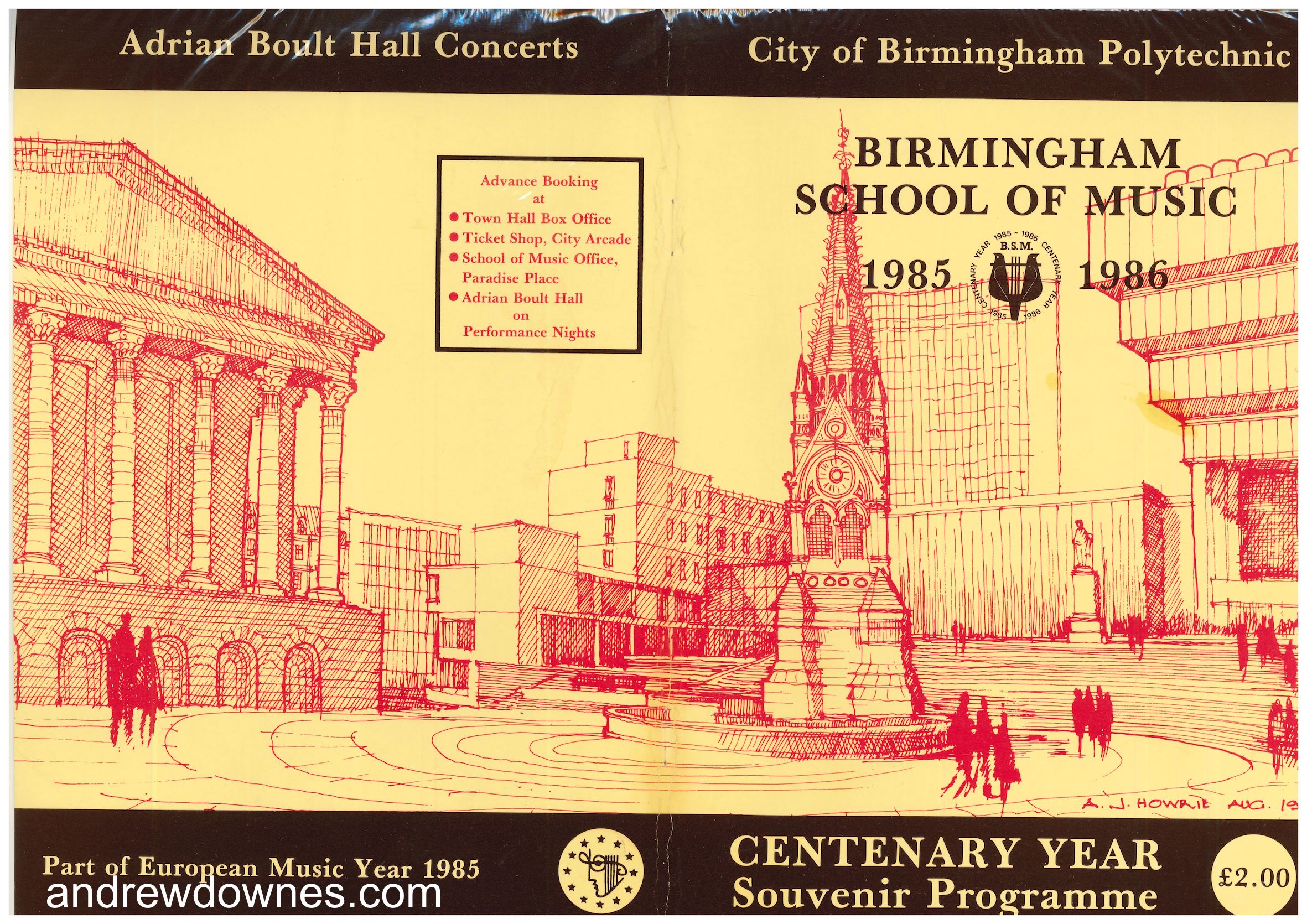 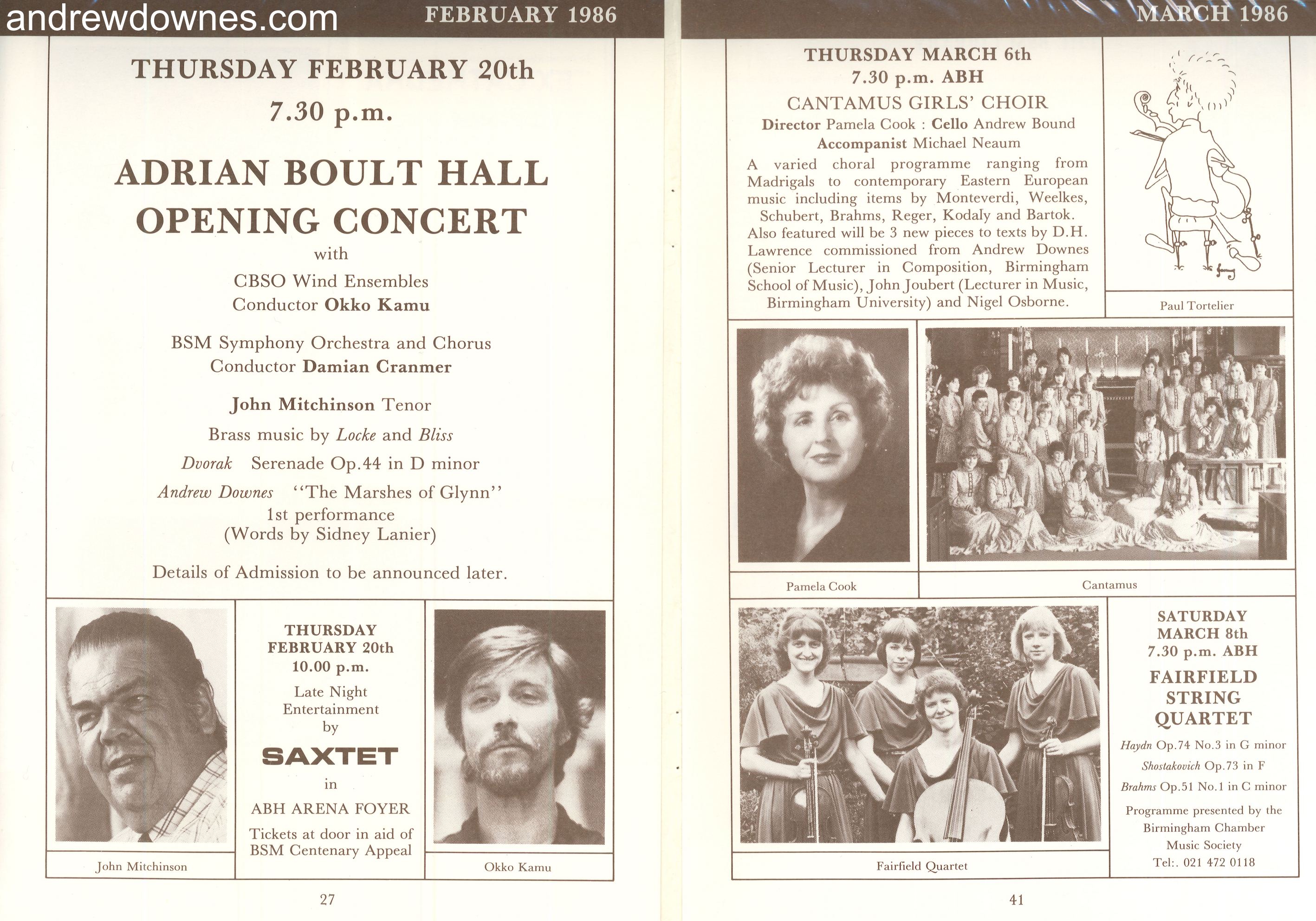 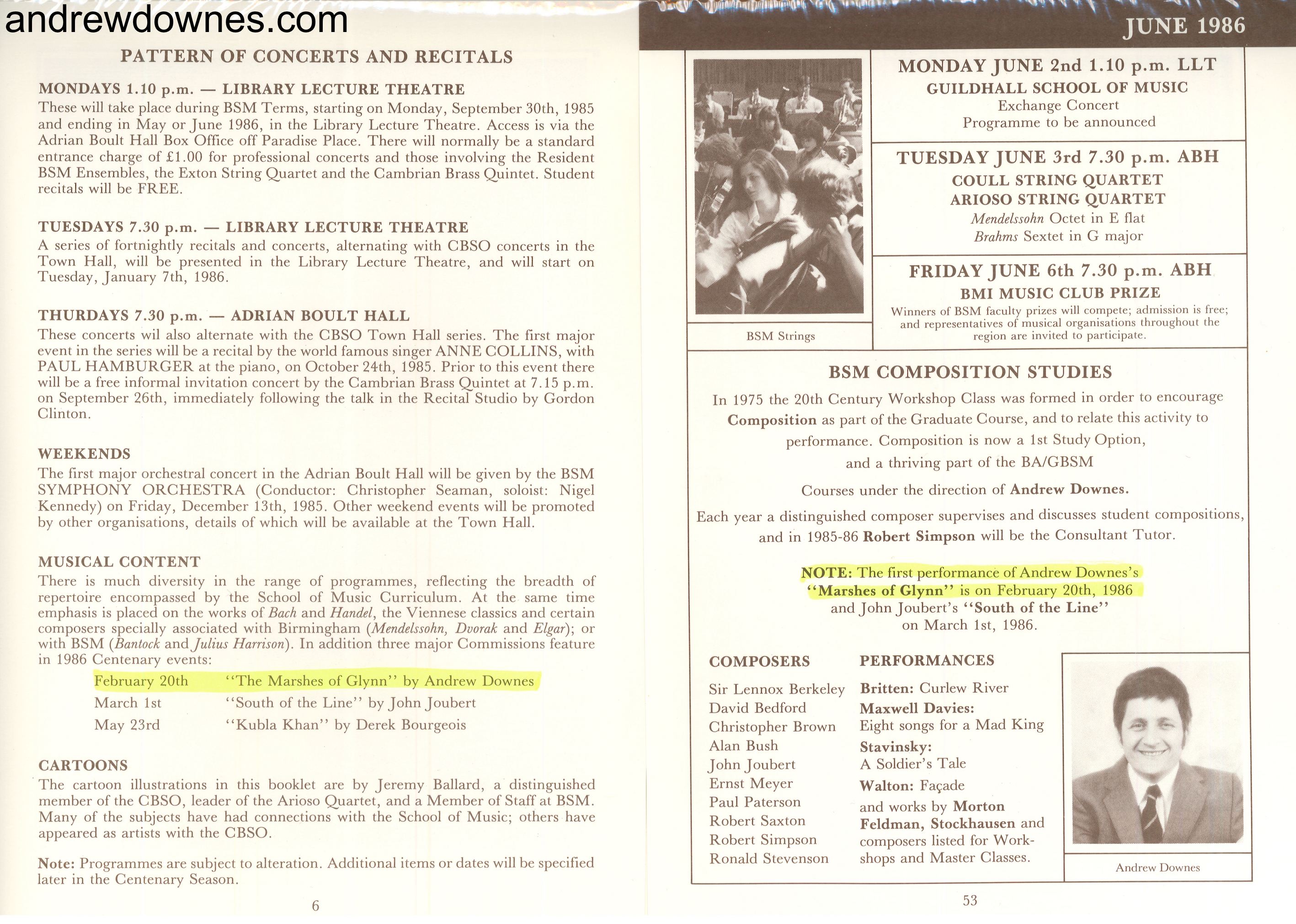 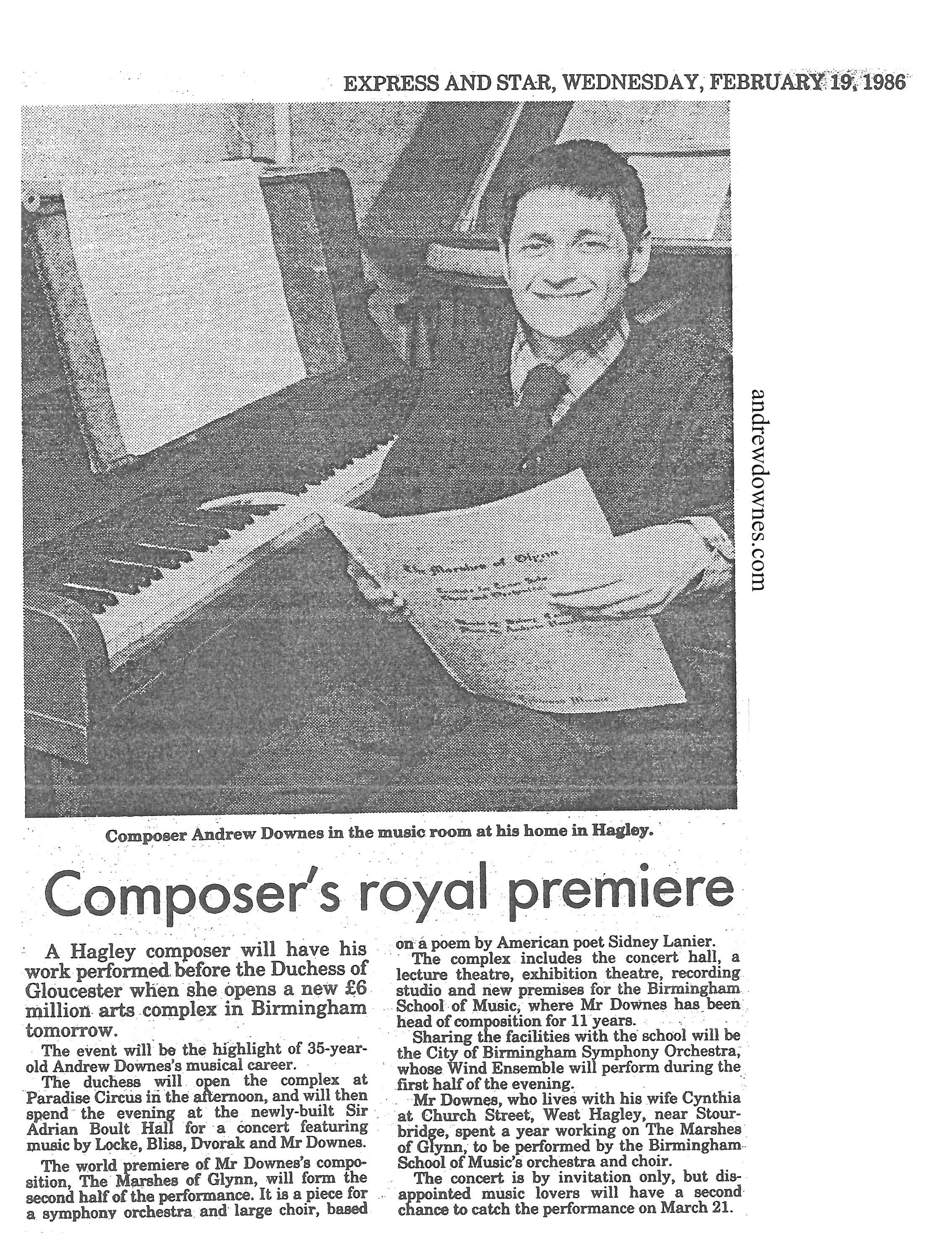 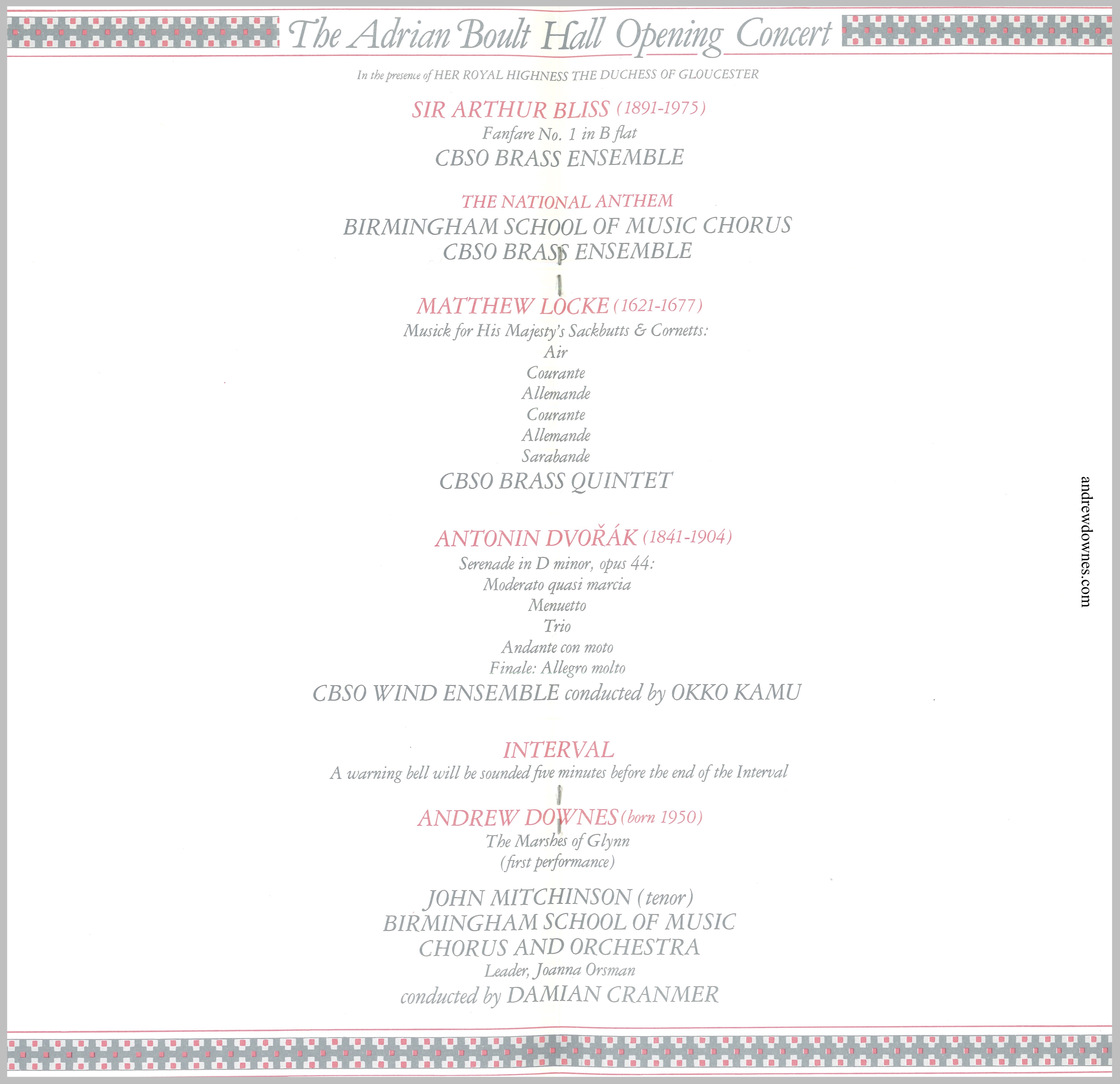 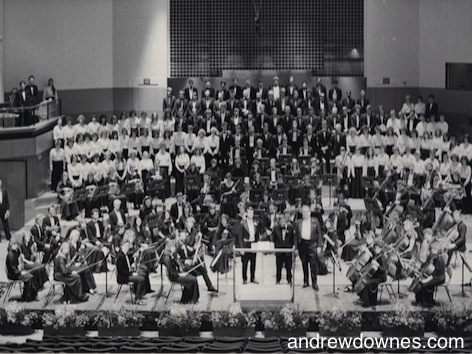 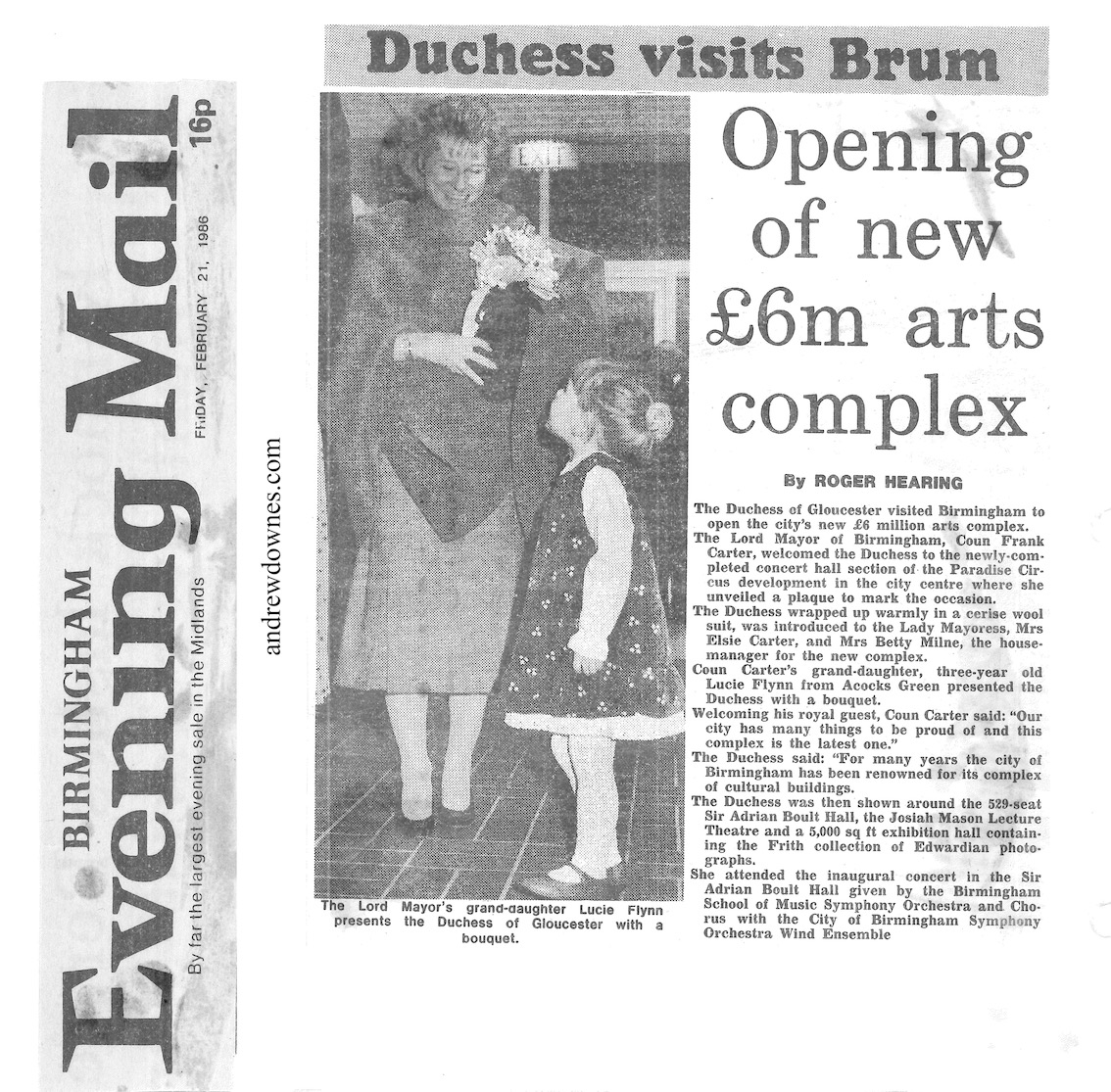 Programme for the second performance: 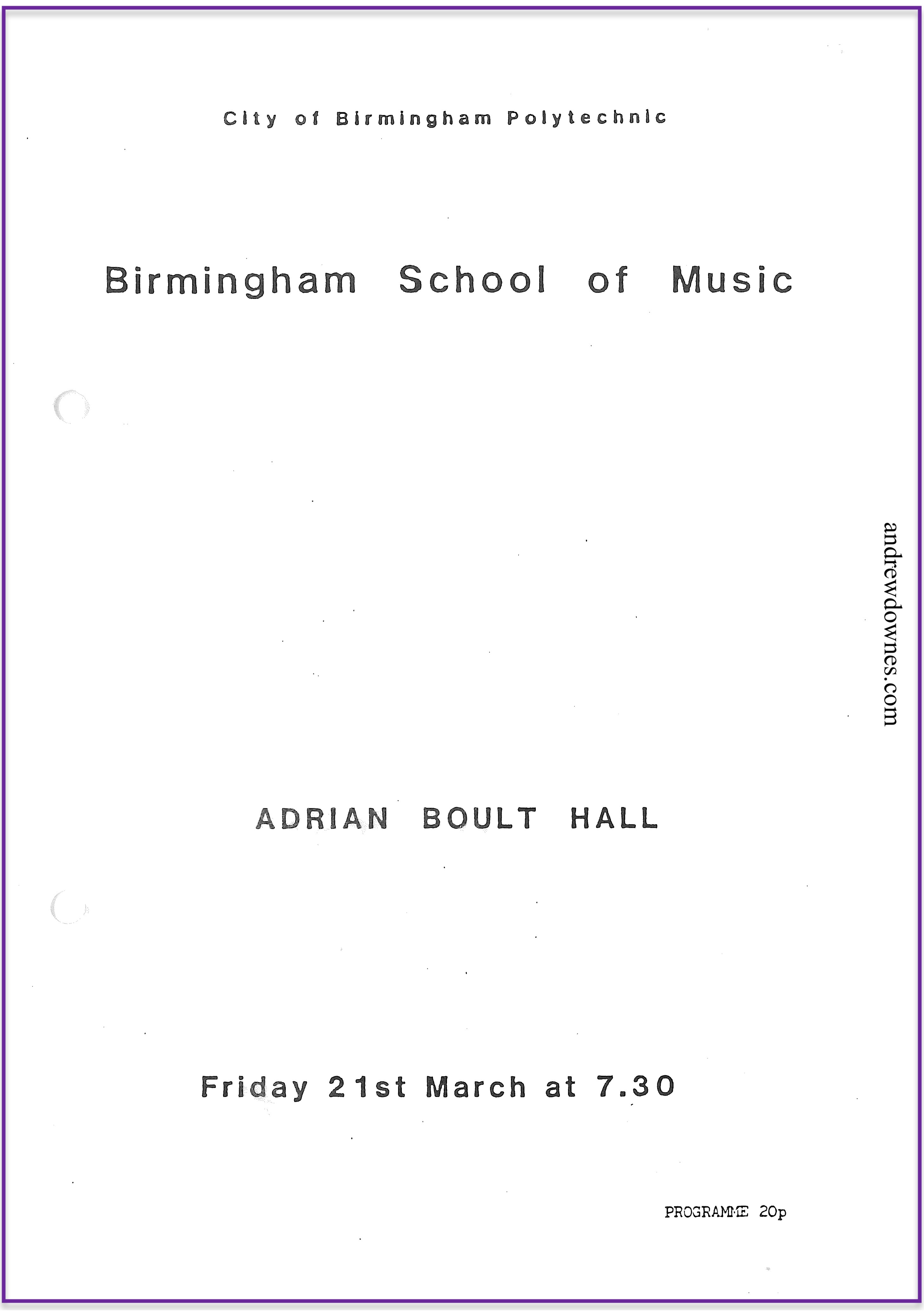 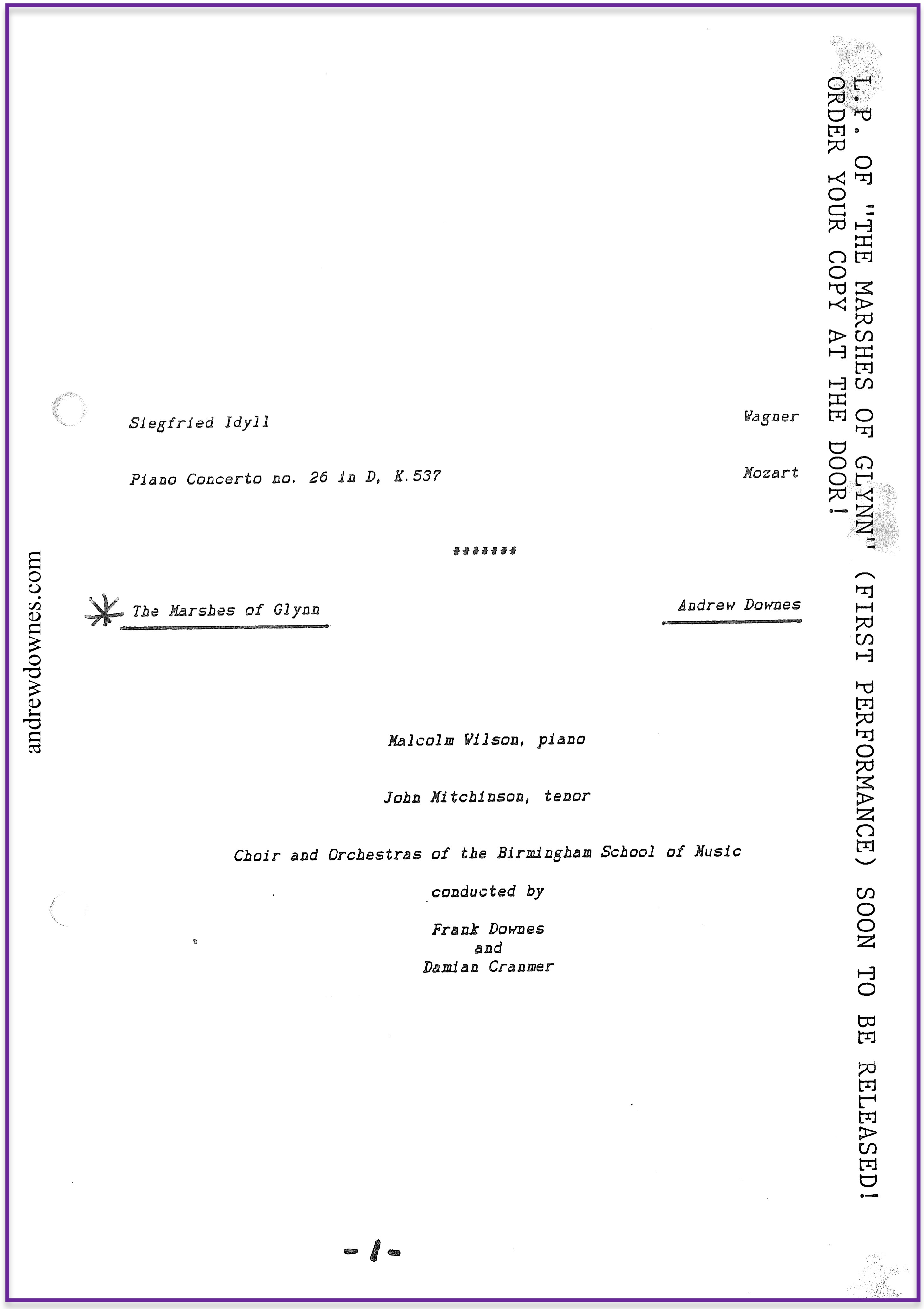 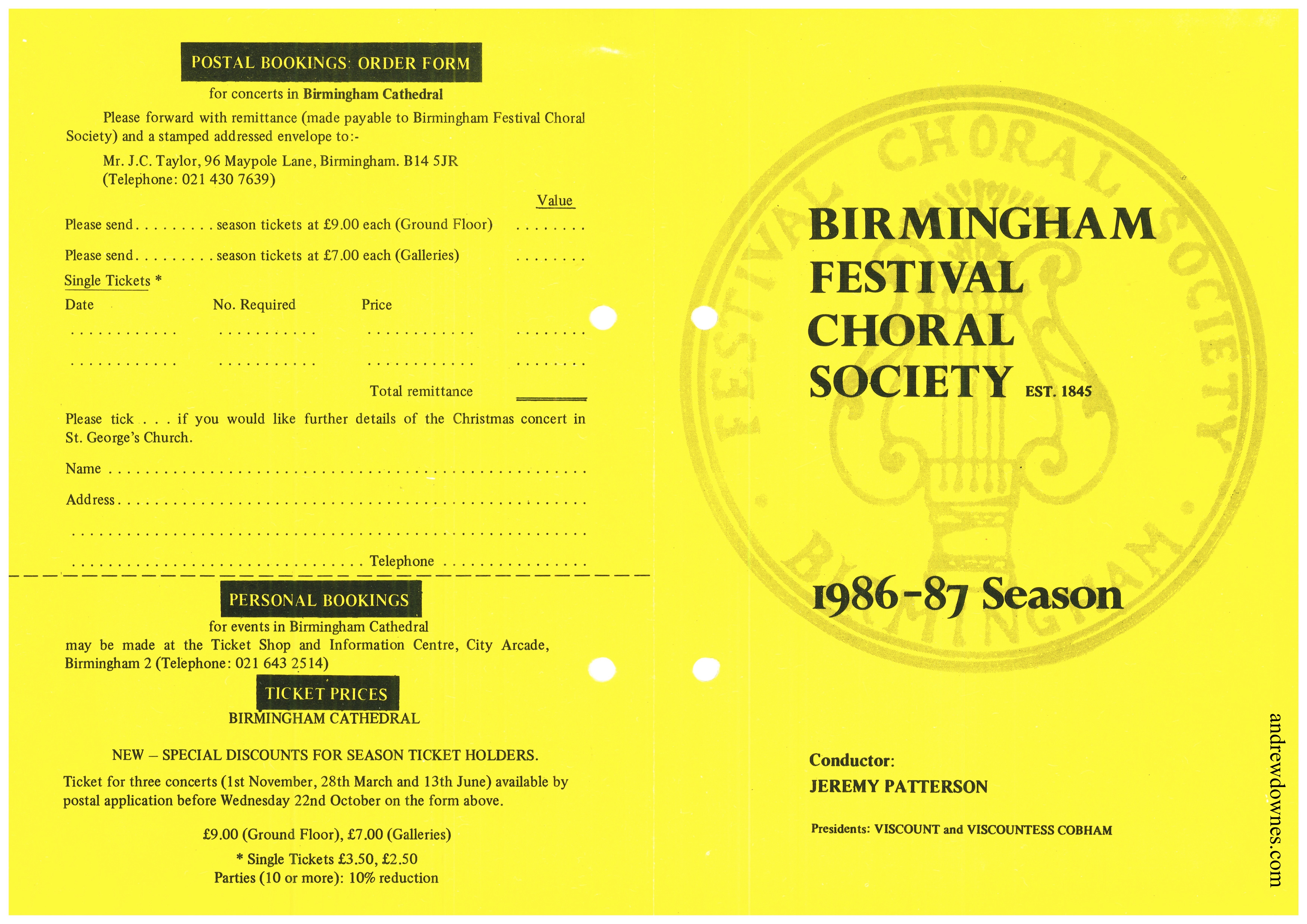 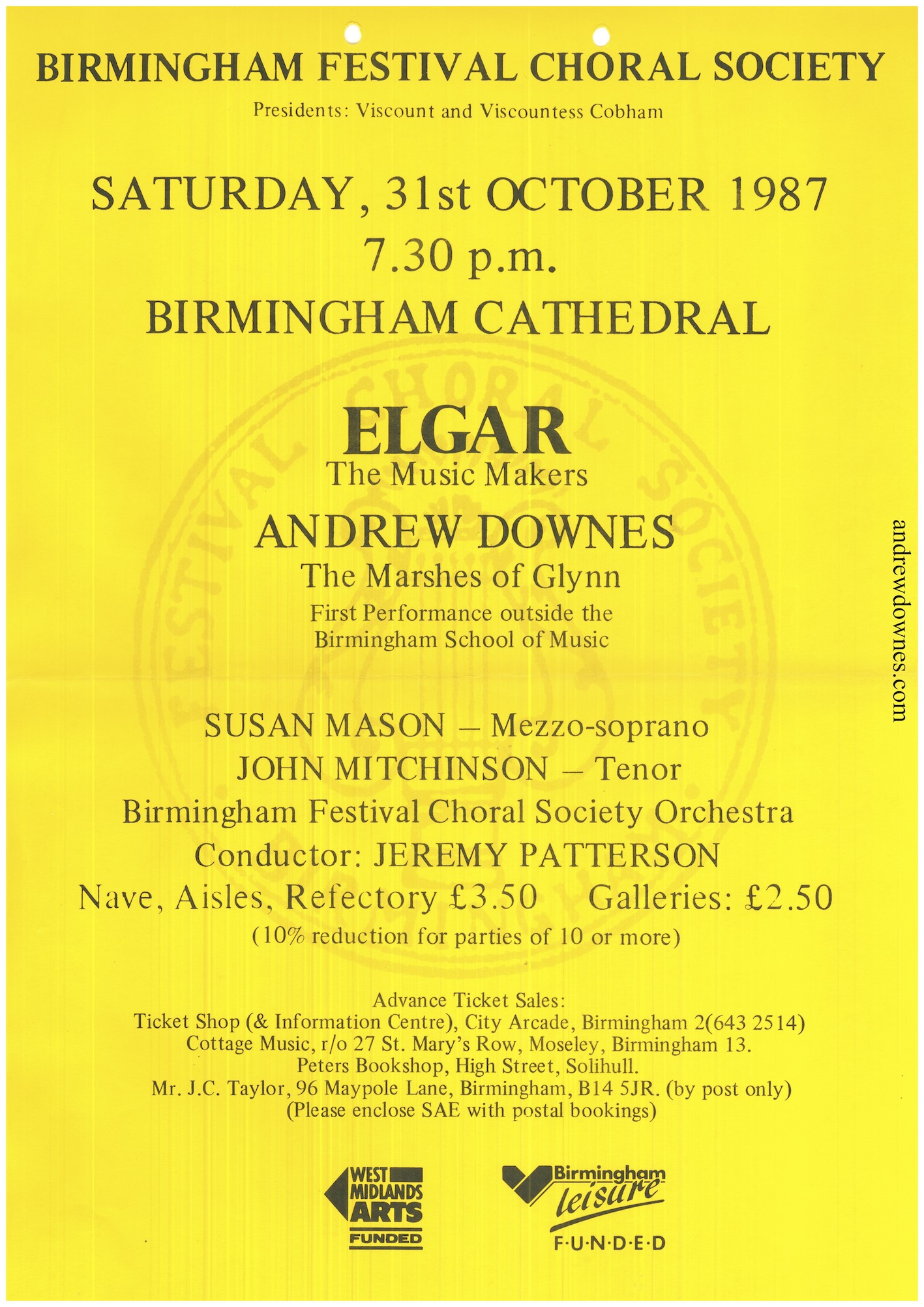 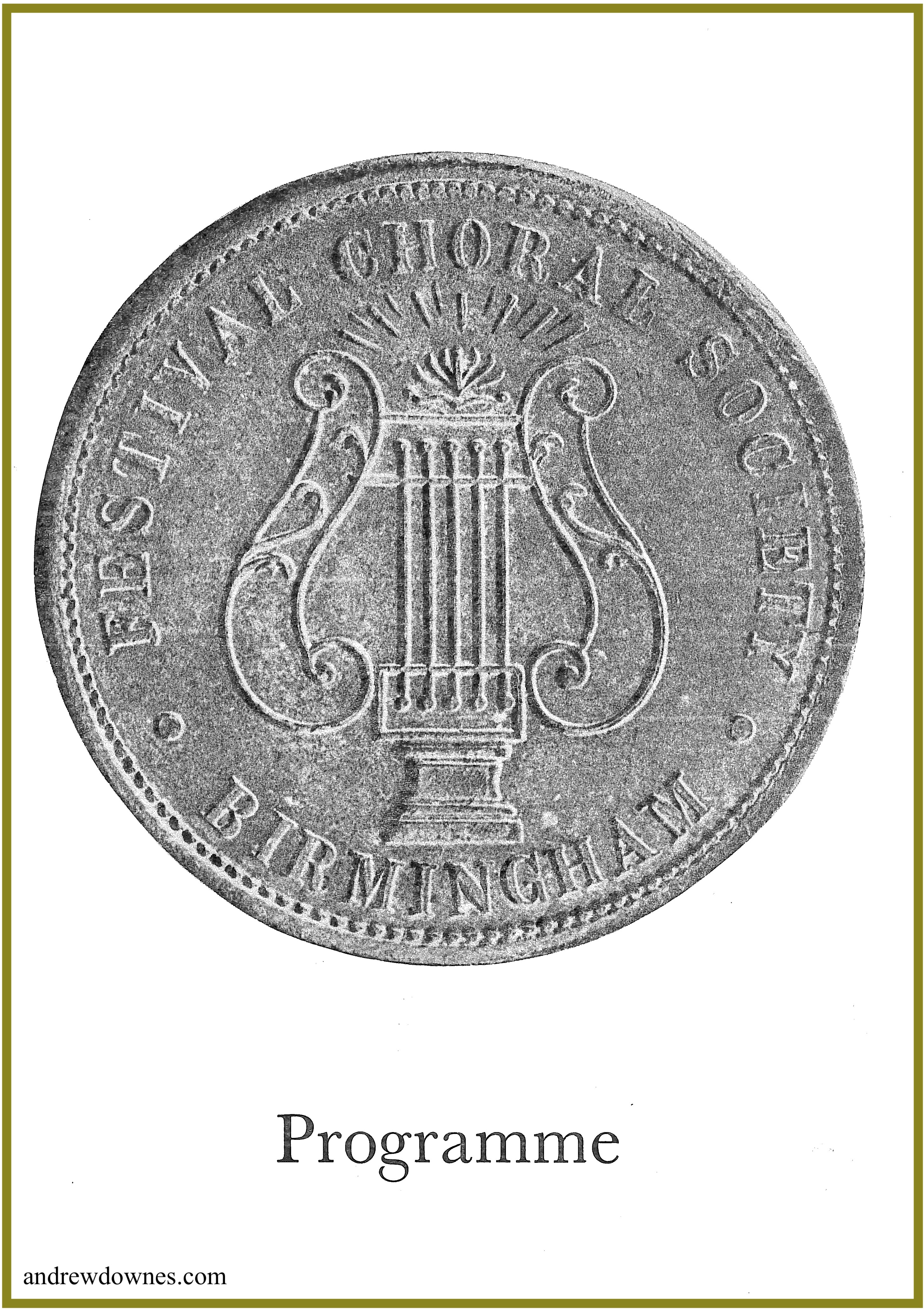 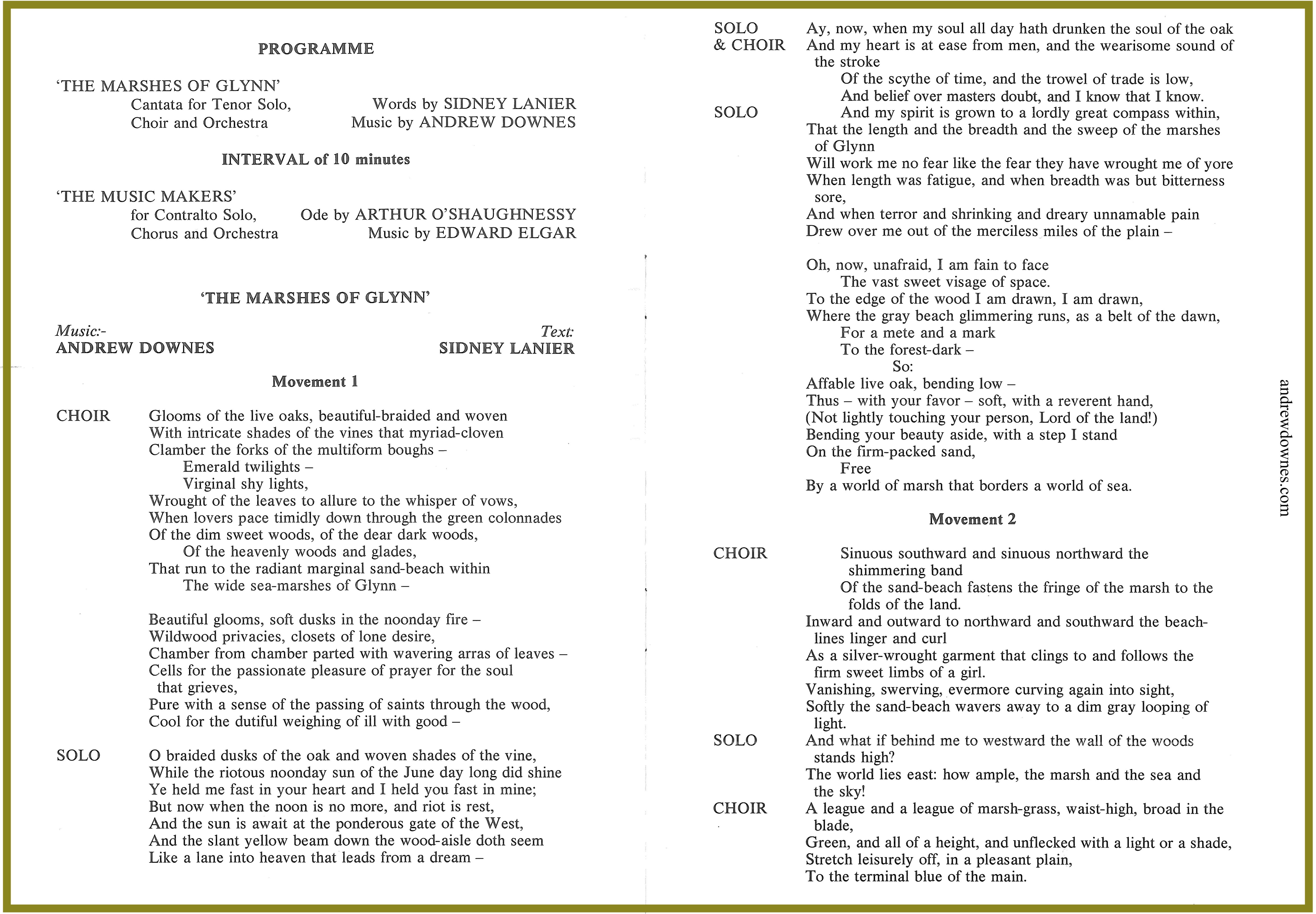 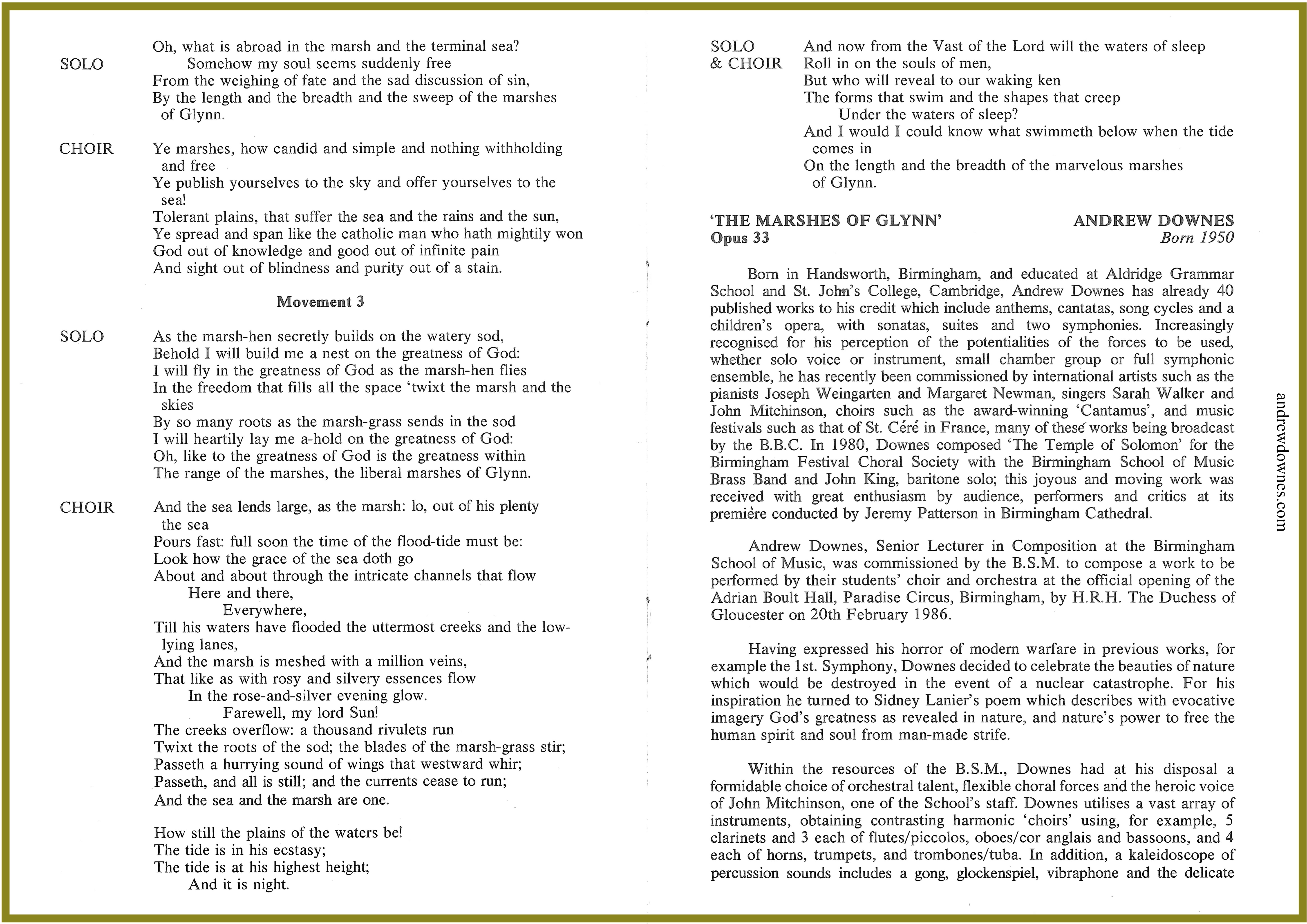 Andrew received many letters of congratulations following this event. Click to read them.

Simon Chalk
I’m in the picture of the premiere.... somewhere towards the back. Mitch was magnificent in this piece... still one of AD’s finest in my opinion and the …

Paul Carey
Fond memories of this fantastic concert and my time at the school of music..a brilliant piece written by a brilliant man!

Playing the glockenspiel part
It was a wonderful experience to perform in Andrew's large scale choral work. As a concert pianist studying percussion as a third study, this was my first …

Frank Dudley
I was a guitar student at the BSM at that time and was a member of the choir. I remember enjoying the piece very much. I remember one rehearsal when the …

Kym Smith
I was there too! It was a really special experience to take part in a first performance.

Chris Collis
Hi Andrew, I remember singing in the first performance of your piece and being moved by the emotional impact. I was very lucky to perform in the first …

Charlotte Munro
I clearly remember singing in the choir for this. I absolutely loved it - all the rehearsals and the performance in the ABH which my parents came to. Happy …

Deborah Drury
Andrew I bought my daughter a record player so guess what I'll be playing! I love this piece.

John Humphreys
Was there - a wonderful, heart-felt piece! x

Rachel Jane Hickman
I was a first year student at the conservatoire and proud to be a member of the choir that performed The Marshes of Glynn. It was a challenging piece …