The Premiere and subsequent performances of The Death of Goliath 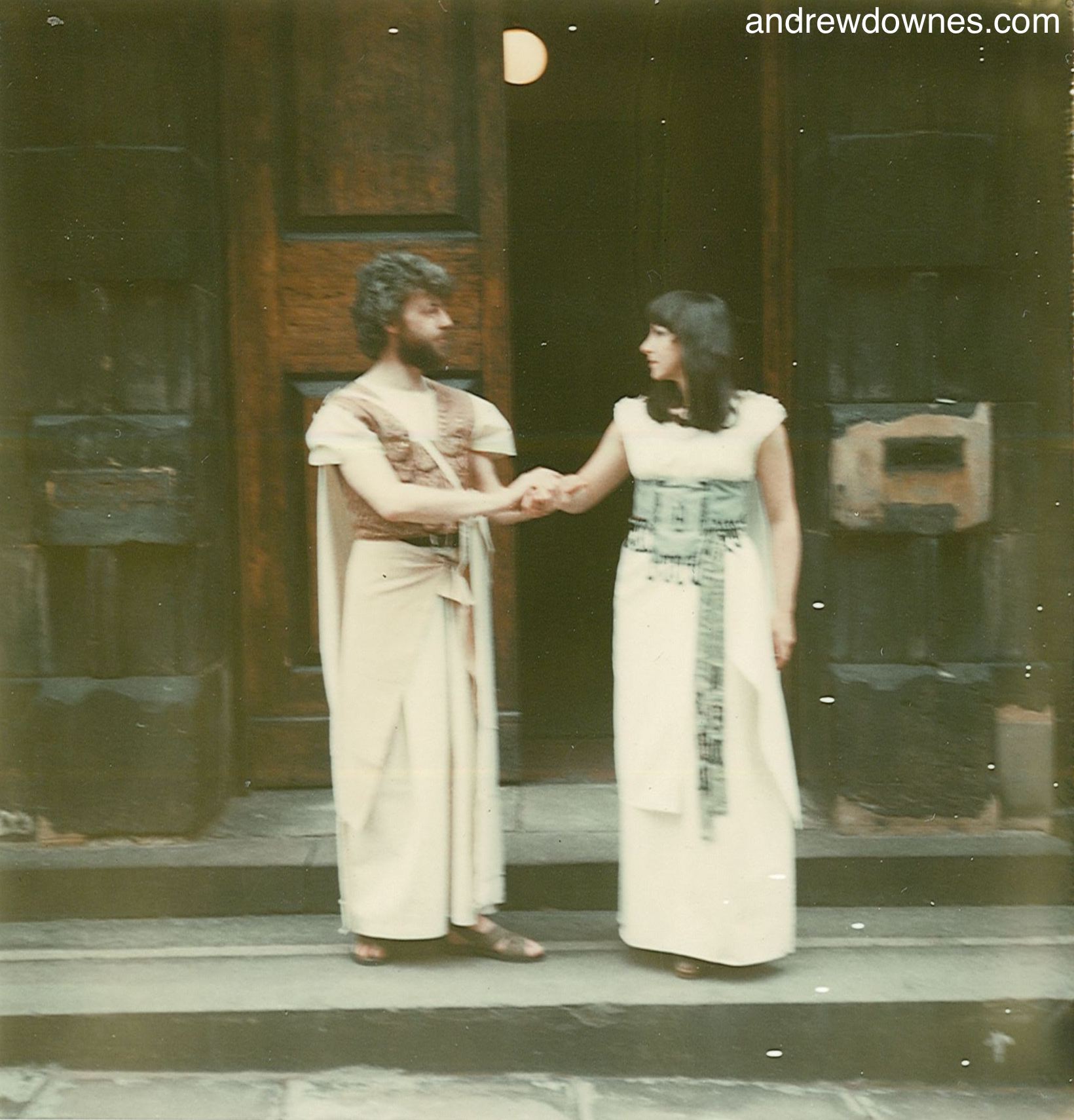 An account by his wife and publisher, Cynthia Downes, posted on February 22nd, 2018

In 1979 Andrew was commissioned to compose a work for the 200th anniversary of St Paul's Church, Hockley, in Birmingham.

Andrew chose to set the story of Goliath, but from the point of view of Goliath, not the triumph of David.  He asked for my help with the story line. I suggested that the Philistine, Goliath, should be past his prime and worried that eventually some younger, fitter Jew would accept his challenge for a duel.  I suggested that he should be married with a family, to add poignancy to the Goliath tragedy.

I wrote out a libretto, not realising the economy of words required when setting music.  Andrew brilliantly extracted the salient features of my libretto and created an extremely dramatic, moving and tightly knit structure with heart-rending music.

I made the costumes from calico, with parts of the outfits died brown, and also using an old light green linen coat.  I used leather for tassles and wooden beads for decoration.

Then we needed a Goliath's head!  I created one with wire and paper mâché.  I then painted on features to look like Michael Dowding, who was going to sing the role.  For the hair and beard I unravelled an old brown knitted pullover, and stuck the wool in the appropropriate places. 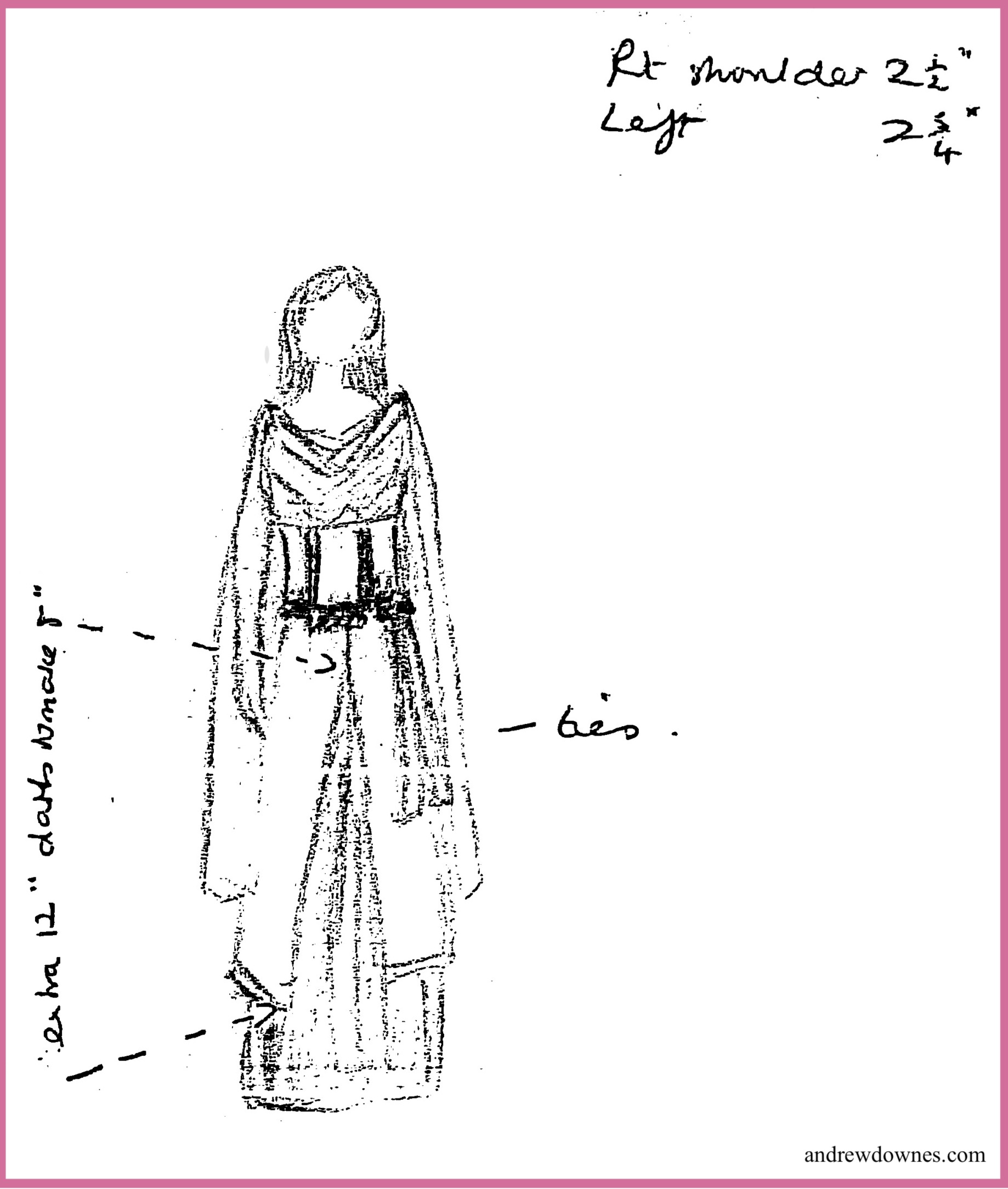 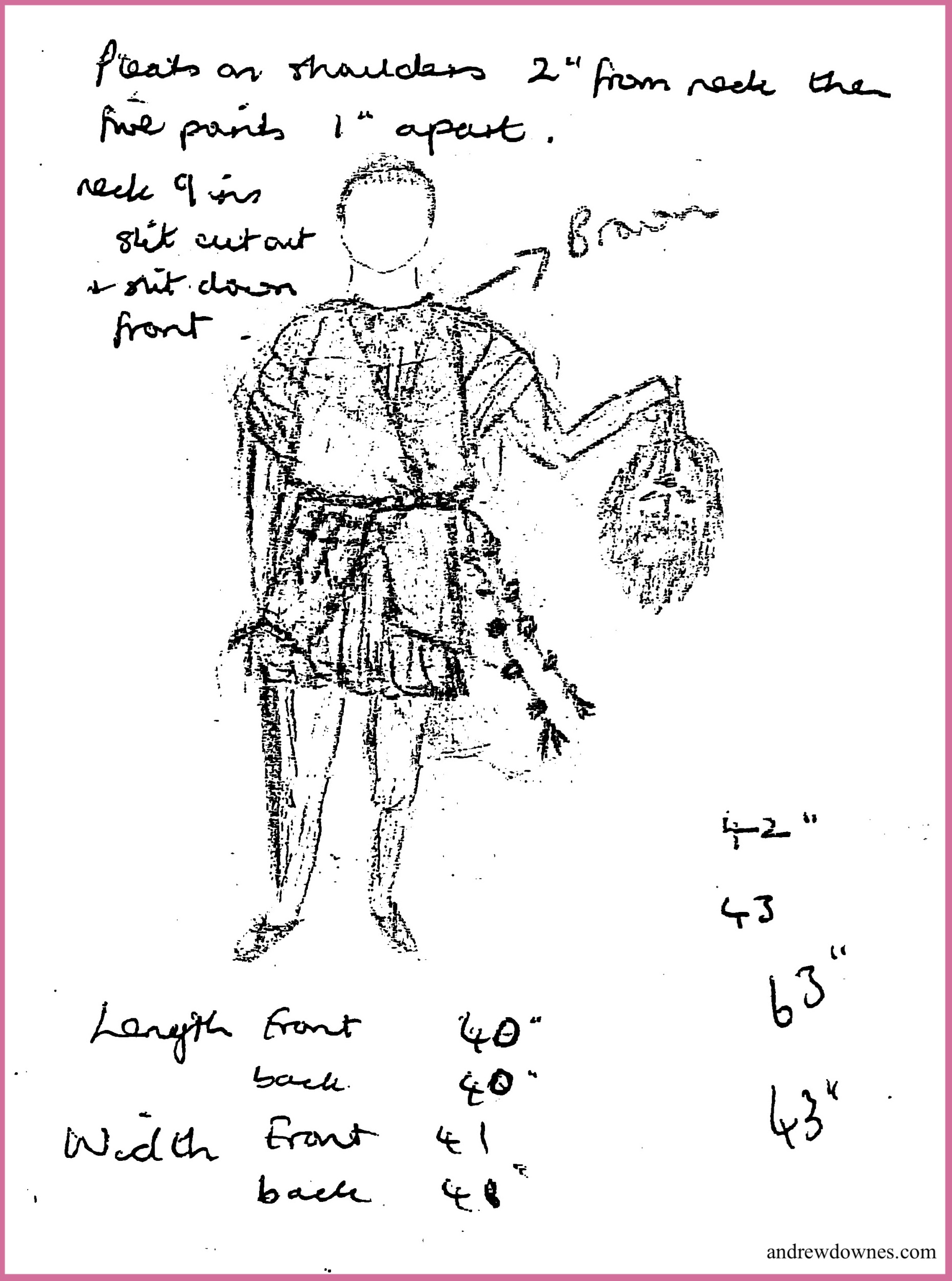 The cantata was first performed by superb soloists: Catherine James as the wife of Goliath, Michael Dowding as Goliath, Andrew Downes as David, and Malcolm Wilson, piano, on January 10th 1979 in the Recital Hall of the Birmingham School of Music (now Royal Birmingham Conservatoire).

Just before the performance, Malcolm Wilson told me his mum would be coming on the bus from Walsall.  He said she would probably complain that the piece was not long enough for such a long journey!  Sure enough, Mrs Wilson, who sat next to me, said at the end: "I did enjoy that.  I could have done with a bit more though!" 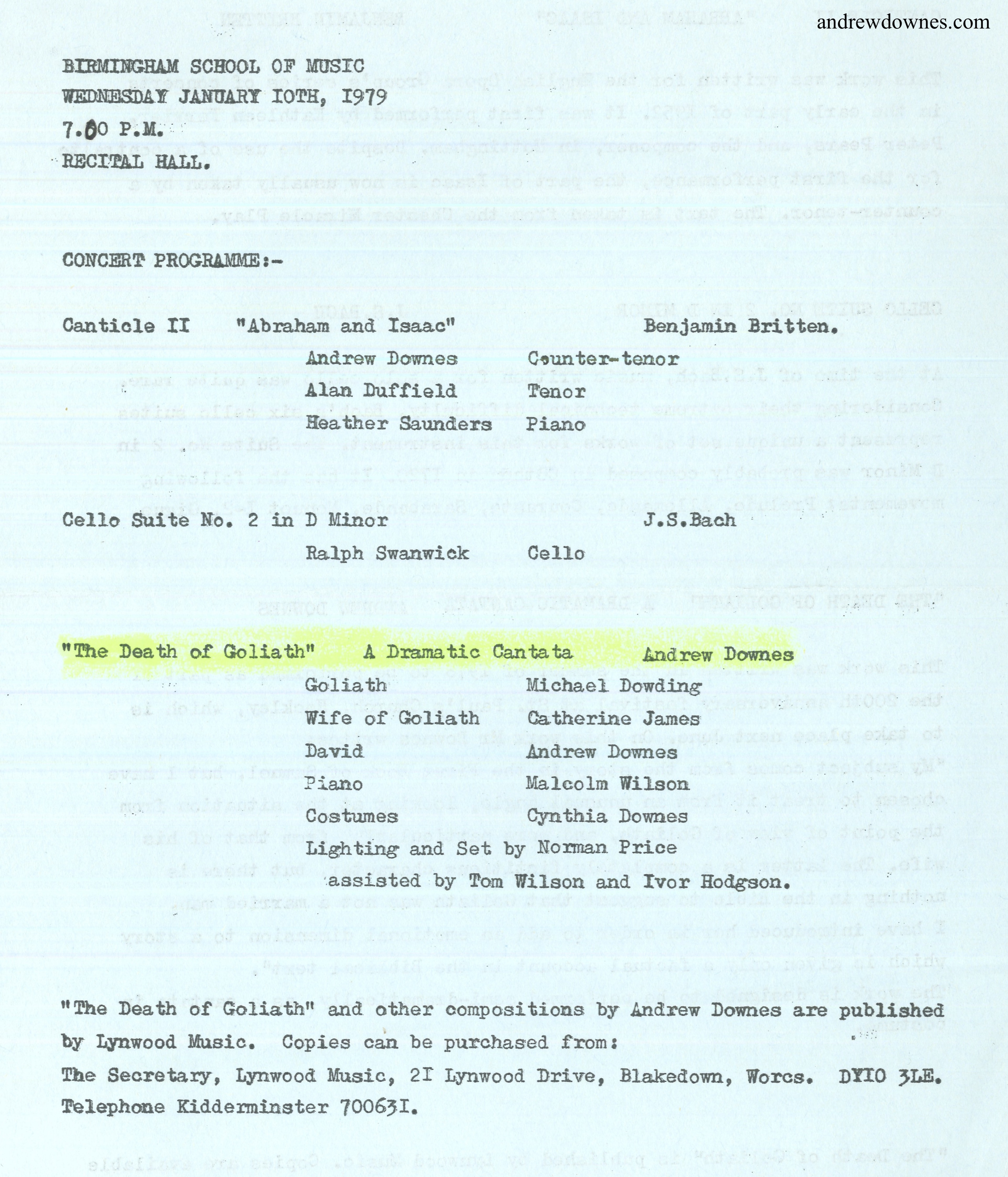 These same wonderful artists gave the second performance of the work in St. Paul's Church, Hockley, on June 9th 1979, as part of St Paul's Bicentenary Week. (The Church was consecrated in June 1779.) This performance was recorded for BBC Radio Birmingham and broadcast on June 11th 1979 and again on September 3rd 1979.

Advertising and programme for the second performance: 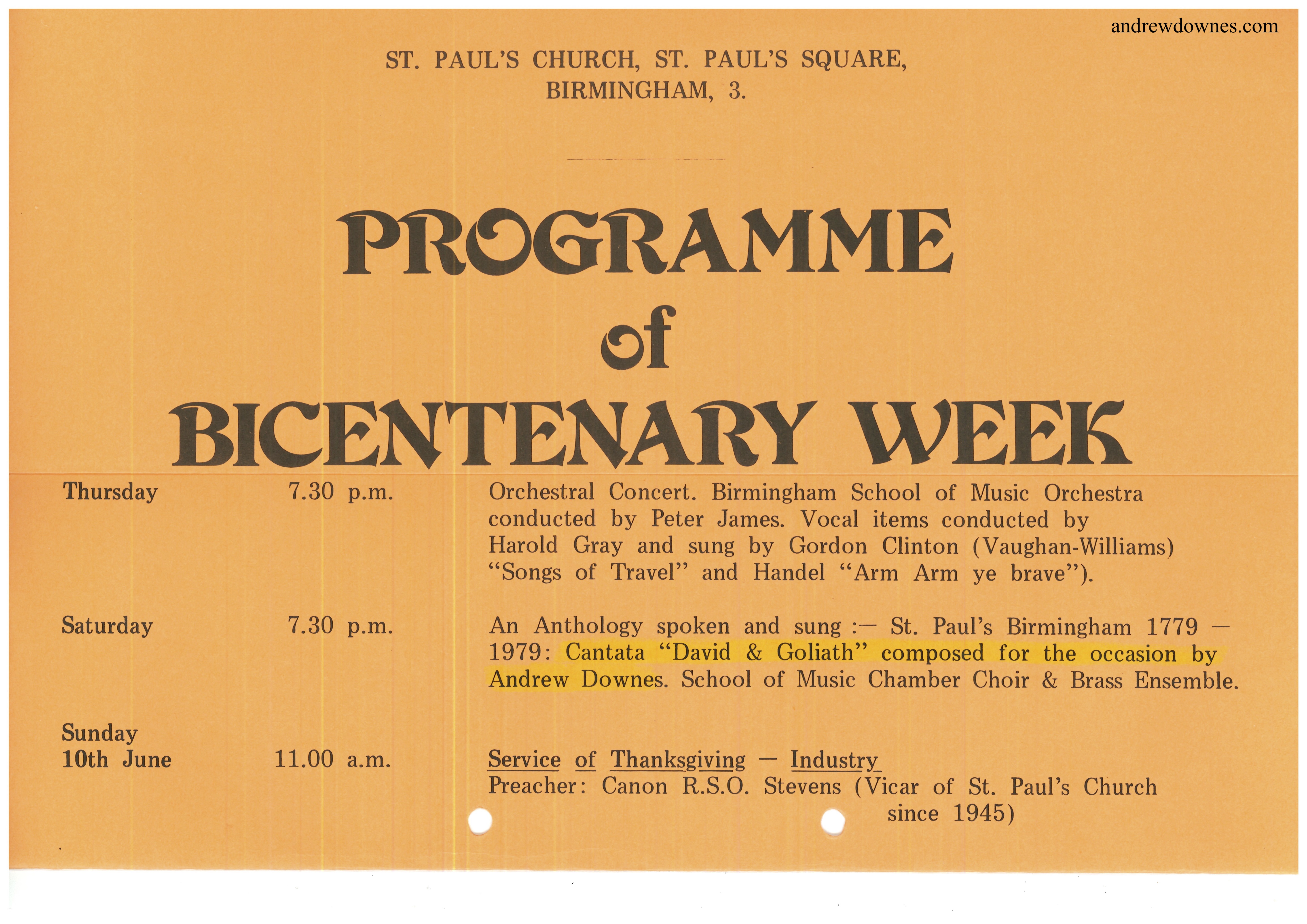 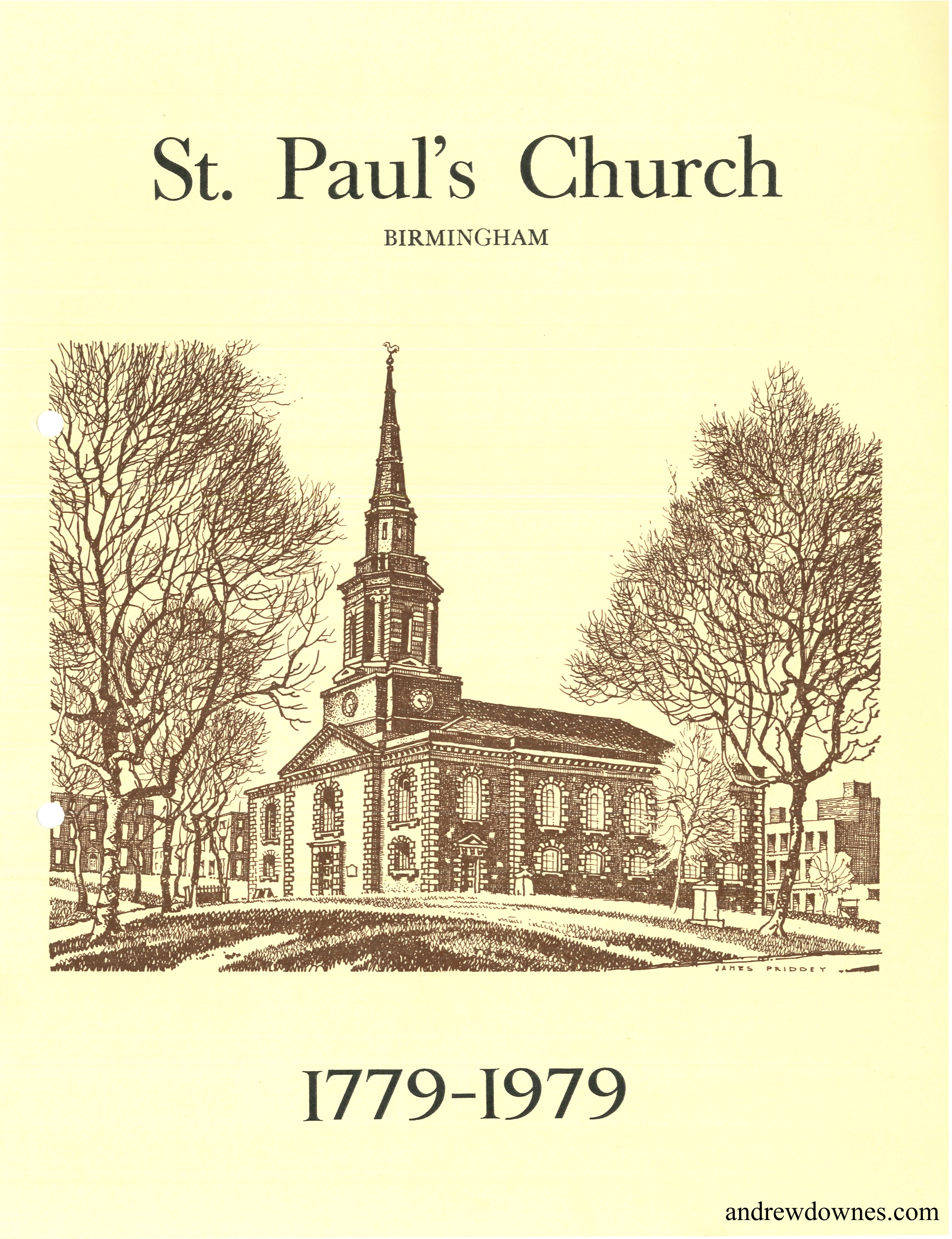 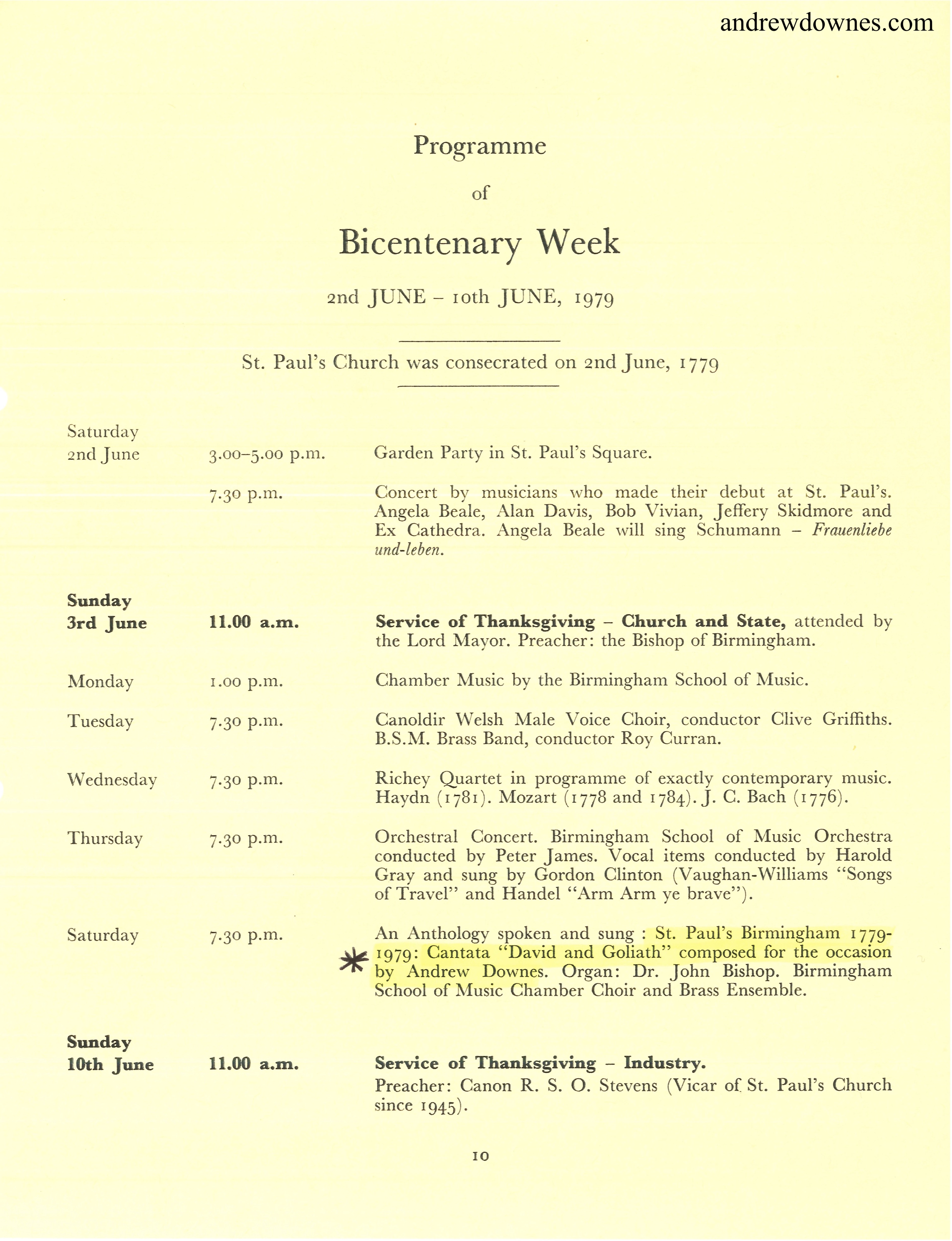 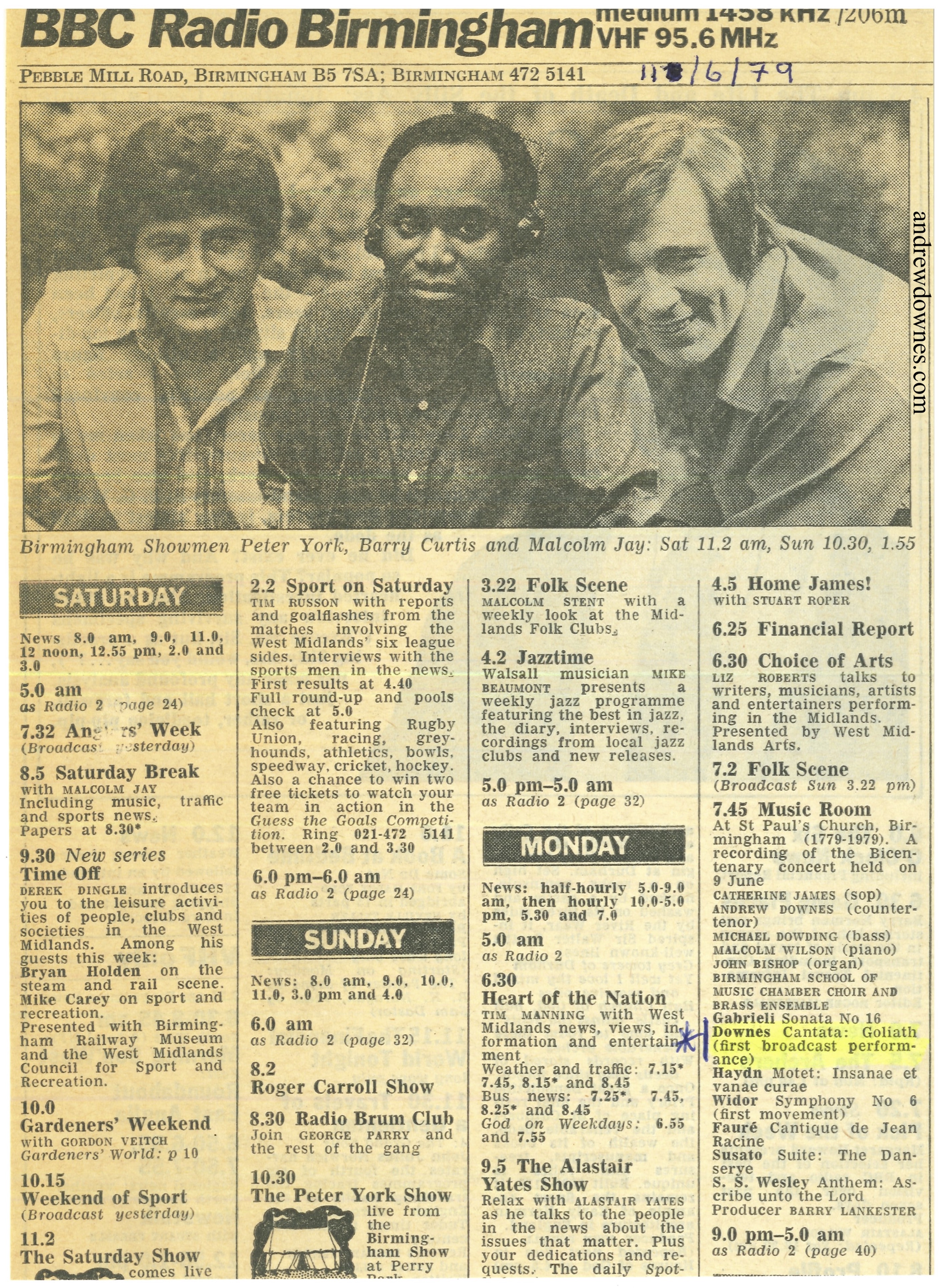 'This is a work of consequence, strongly dramatic in content and constructed with an admirable economy which in no way detracts from its emotional impact.'
THE BIRMINGHAM POST

The Death of Goliath received more performances by musicians from Birmingham Conservatoire over the years, including a further performance in the Recital Hall of the Birmingham School of Music in September 1979; a production at the West Dyke Methodist Church by the Centurion Opera Group in Redcar, Yorkshire, in September 1981; a performance in the Josiah Mason Hall at the Birmingham School of Music in February 1987; one in the Recital Hall of the Conservatoire in November 1994 and a performance in Worcester College Hall in February 1995.  I look forward to when our daughter, Paula, takes on the role of Goliath's wife in a production one day!..

My synopsis of the plot:

3 soloists enact the story, with a piano accompaniment.  Goliath enters.  He expresses his apprehensions: he is said to be strong, the strongest man alive.  But now he is past his prime.  The strength leaves his limbs every day.  He prays to God for courage, for his people are dependent on him.  Every day he goes out and challenges the Jews to find an opponent for him, to settle the differences between their tribes with a duel and thus avoid a battle.  But the Jews have remained silent and produce no one to challenge his strength.  And yet his strength is failing…

He becomes aware of his wife who has just come onto the scene, wondering what is wrong.  He covers up his anxiety and says he was just counting his blessings for his lovely wife and family.

Now Goliath’s wife expresses her anxieties.  Why does her husband want to go about destroying their happiness?  Why does he insist on facing the Jews single handed?  Is there no one else?

Suddenly the voice of David is heard from the wings.  He has come to accept Goliath’s challenge.  Is Goliath not going to come?  Is he afraid?

Goliath and his wife see that David is young.  He will be swift and agile. Goliath’s wife is terrified.

But Goliath goes out to face the duel.  The battle is conveyed on the piano.  The running backwards and forwards, the clashes, the thrust of the sling, the stone through the air and the fall of Goliath are all evoked in a thrilling cadenza, which reaches its climax when David cries from the wings: “I am victorious!”.  We hear him decide to cut off Goliath’s head, so that Goliath’s people will see their defeat.  Carrying the severed head, he appears, declaring: “This is the head of an arrogant man.  He thought he could conquer the Jews single-headed.  But with just one stone in my sling, I showed up his impertinence. The Philistines will take up their rightful place.  They shall be our slaves.  Not one of them will dare to refute our authority.  I will purge and devastate them.  My victory will be remembered till the end of time.”

The stage is then left to the dejected wife of Goliath.  “My husband is dead.  How can I go on living?  He sacrificed all that we might live in peace.  He was so brave, but now he’s gone forever.  The hopes of our people have perished with my husband.  As a nation we are finished.  David will come with his army and destroy us.  In just a few years the myth will form:  a tender, innocent youth killed an evil villain, my husband, my darling.  He was a good and gentle man, who only wanted freedom and peace for his people.   He gave his life.  But that will be forgotten.  My only consolation – the memory of his love.”

Memorabilia for other performances: 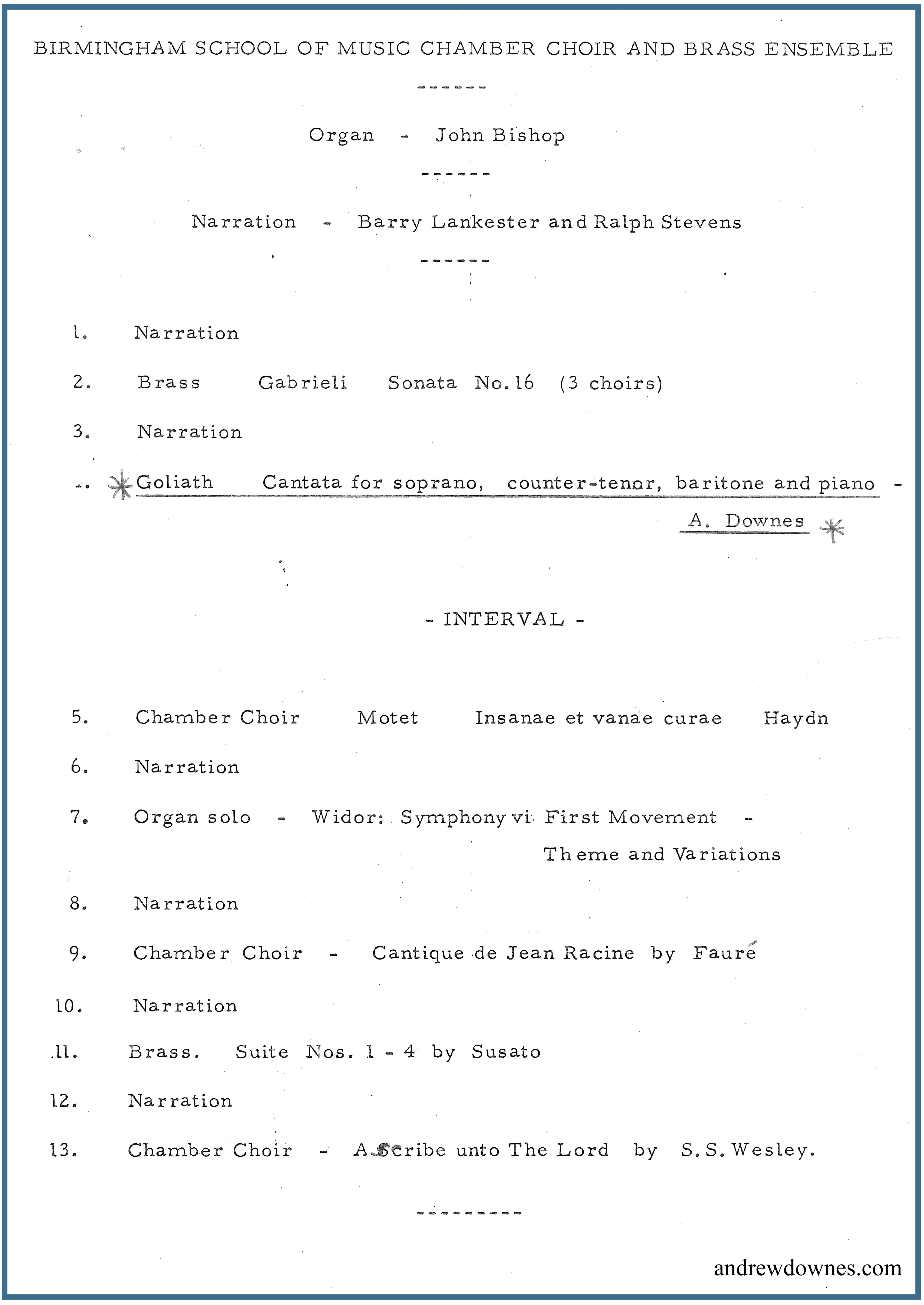 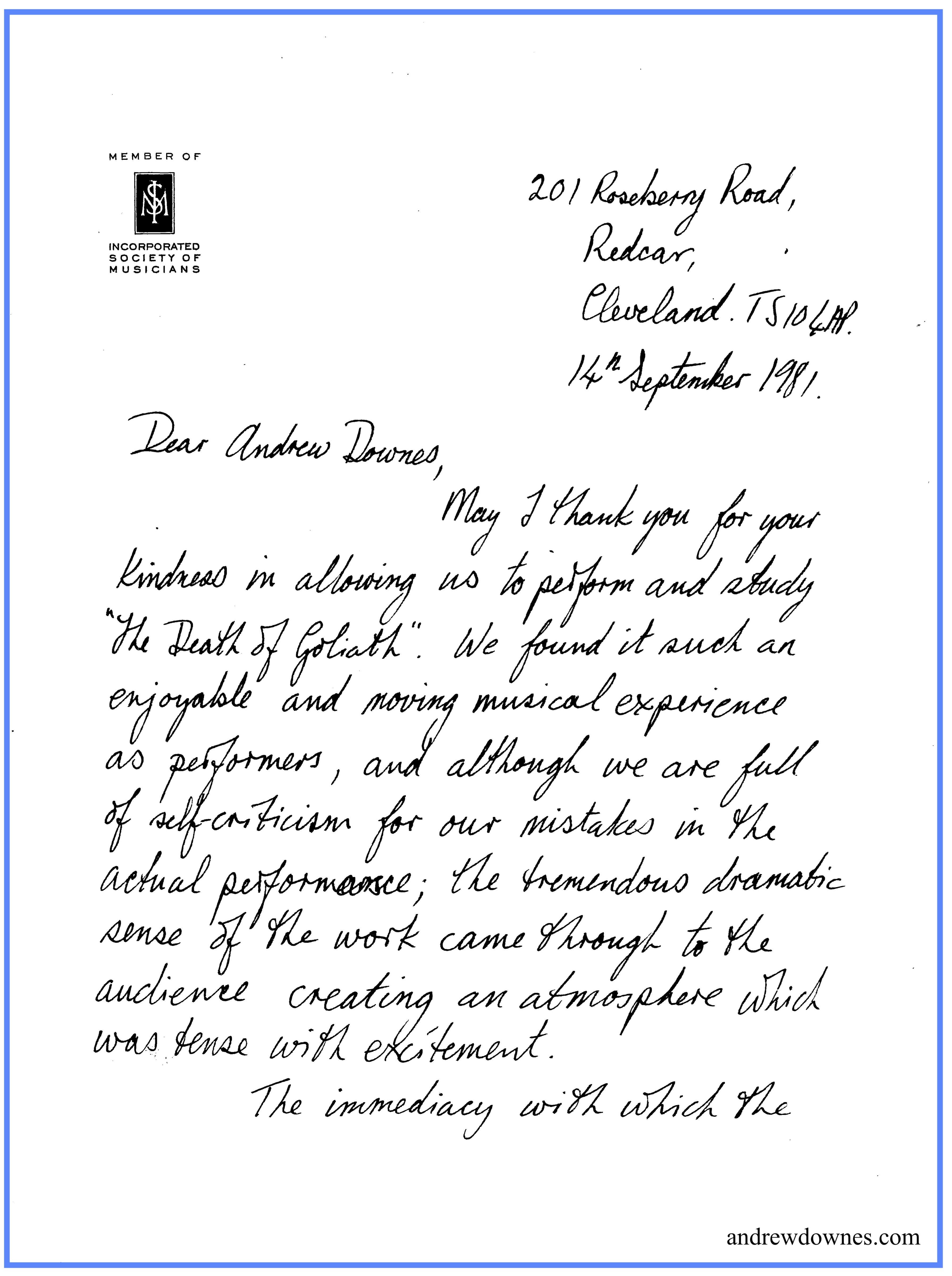 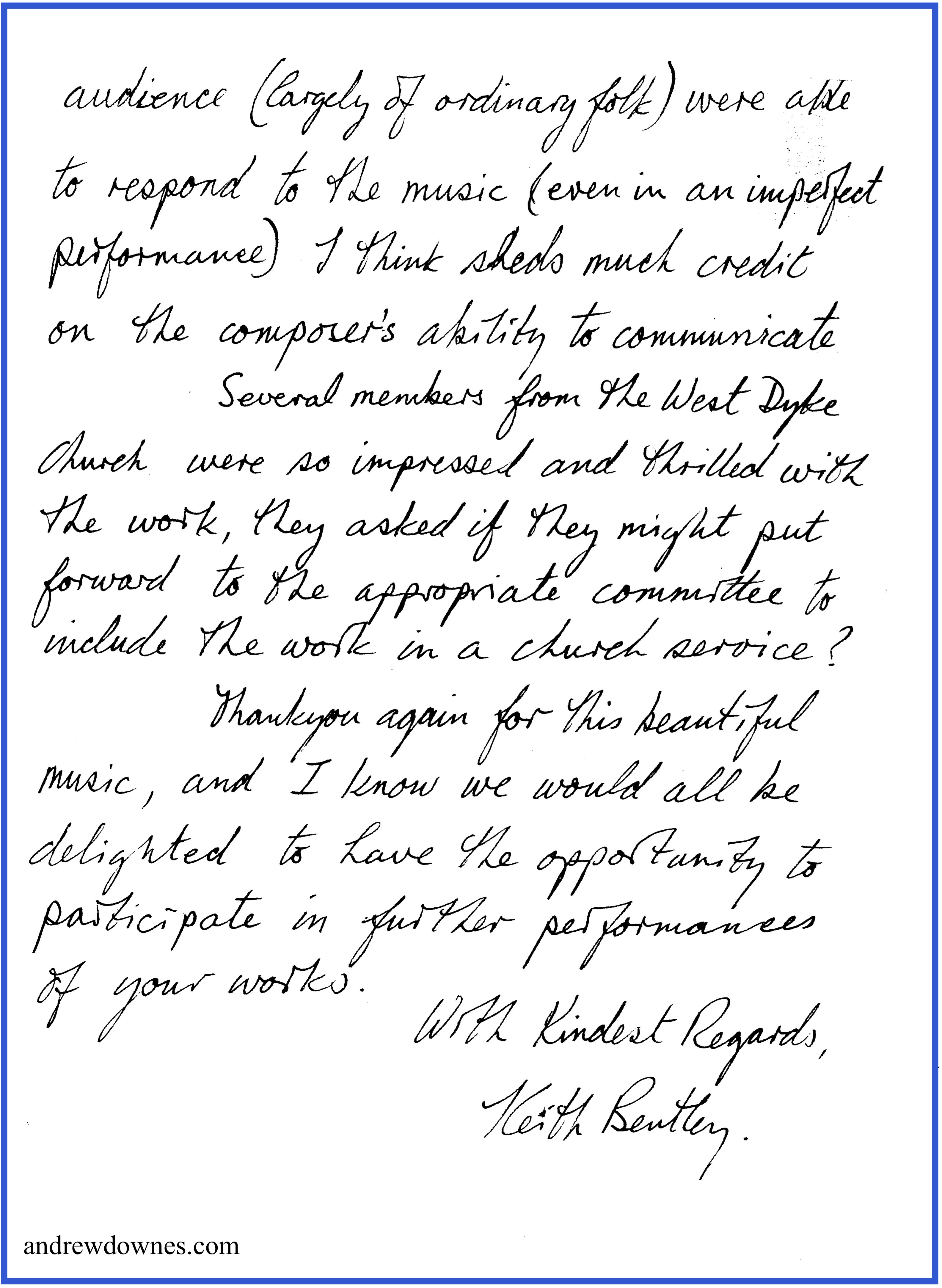 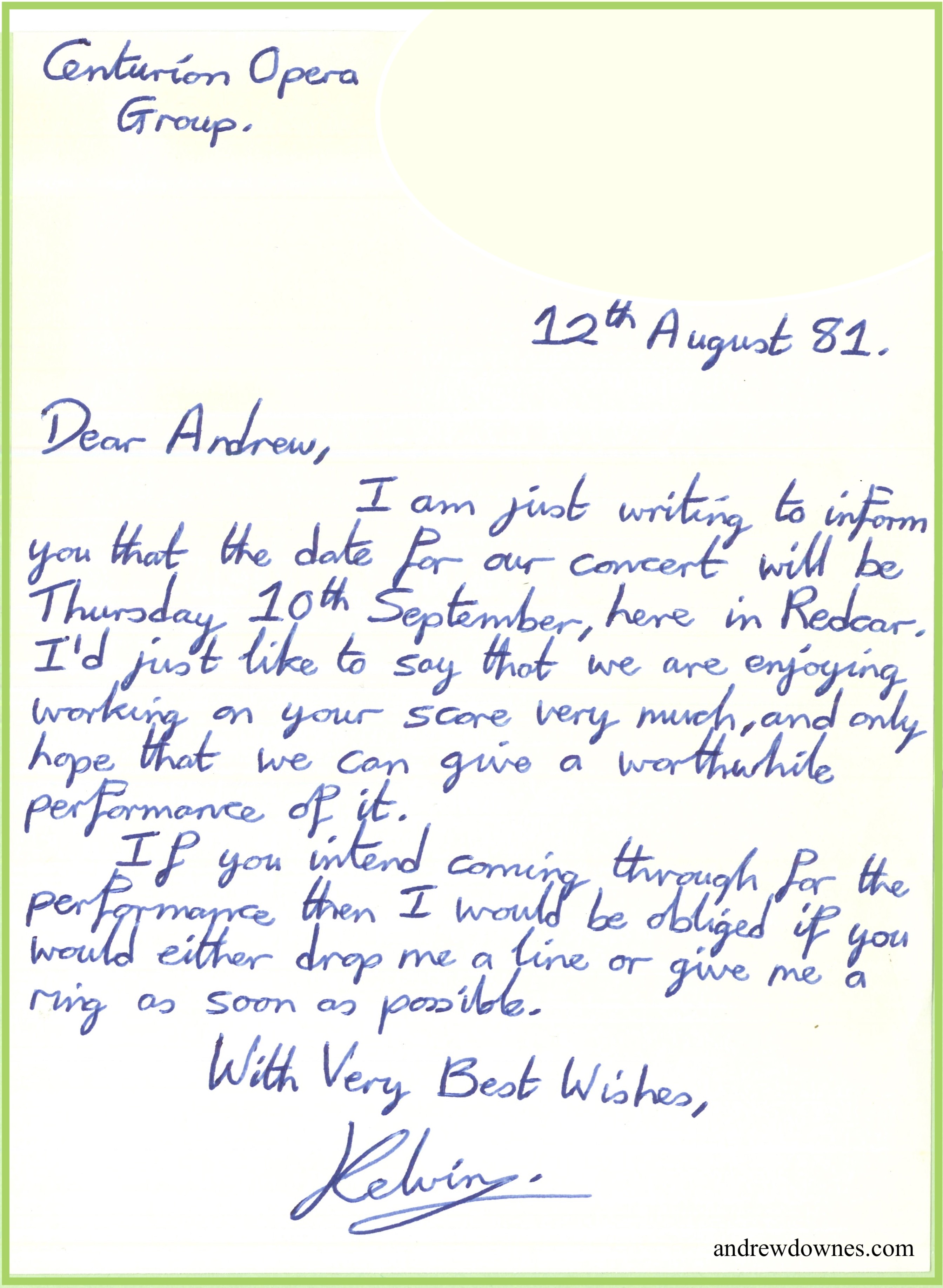 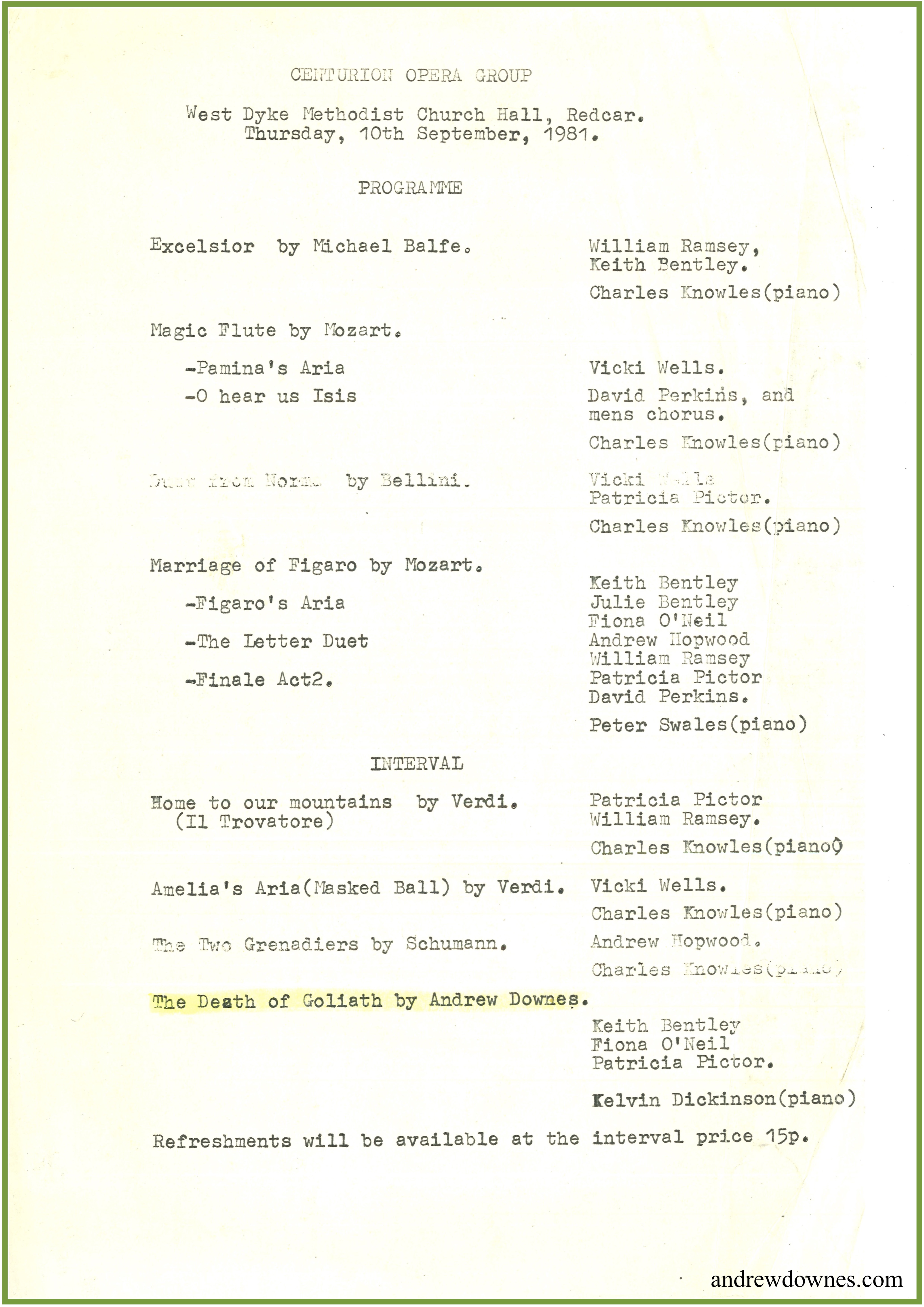 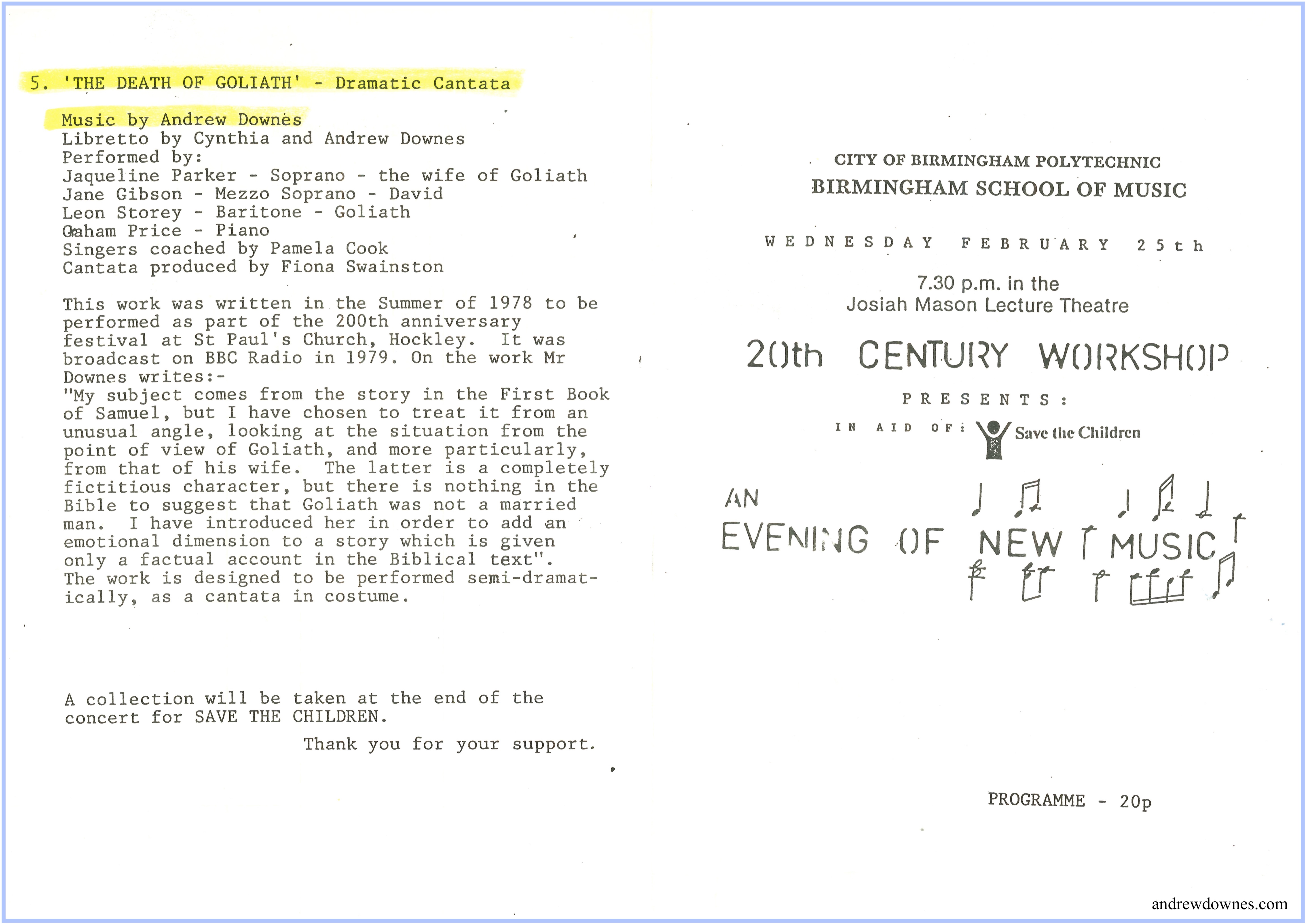 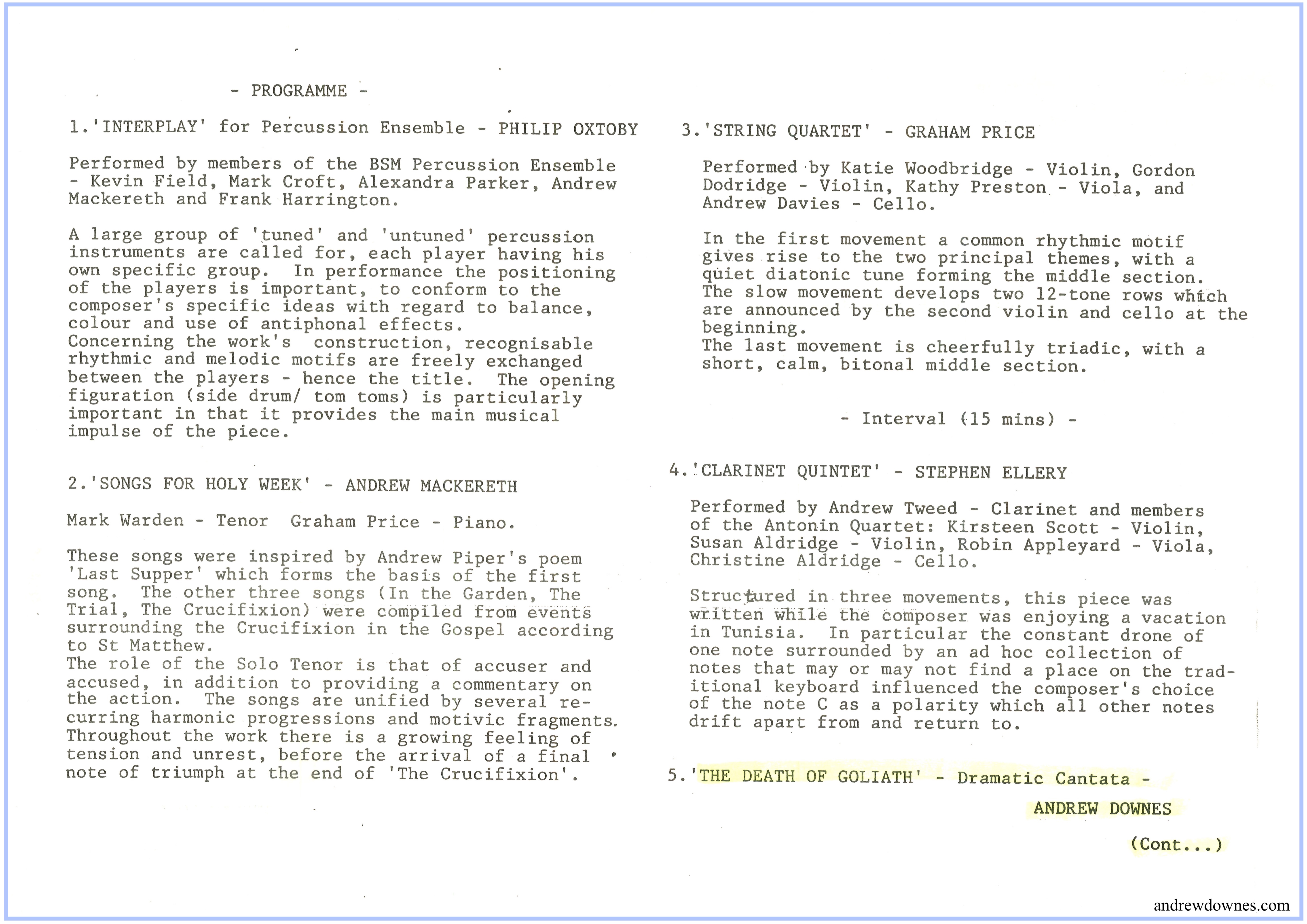 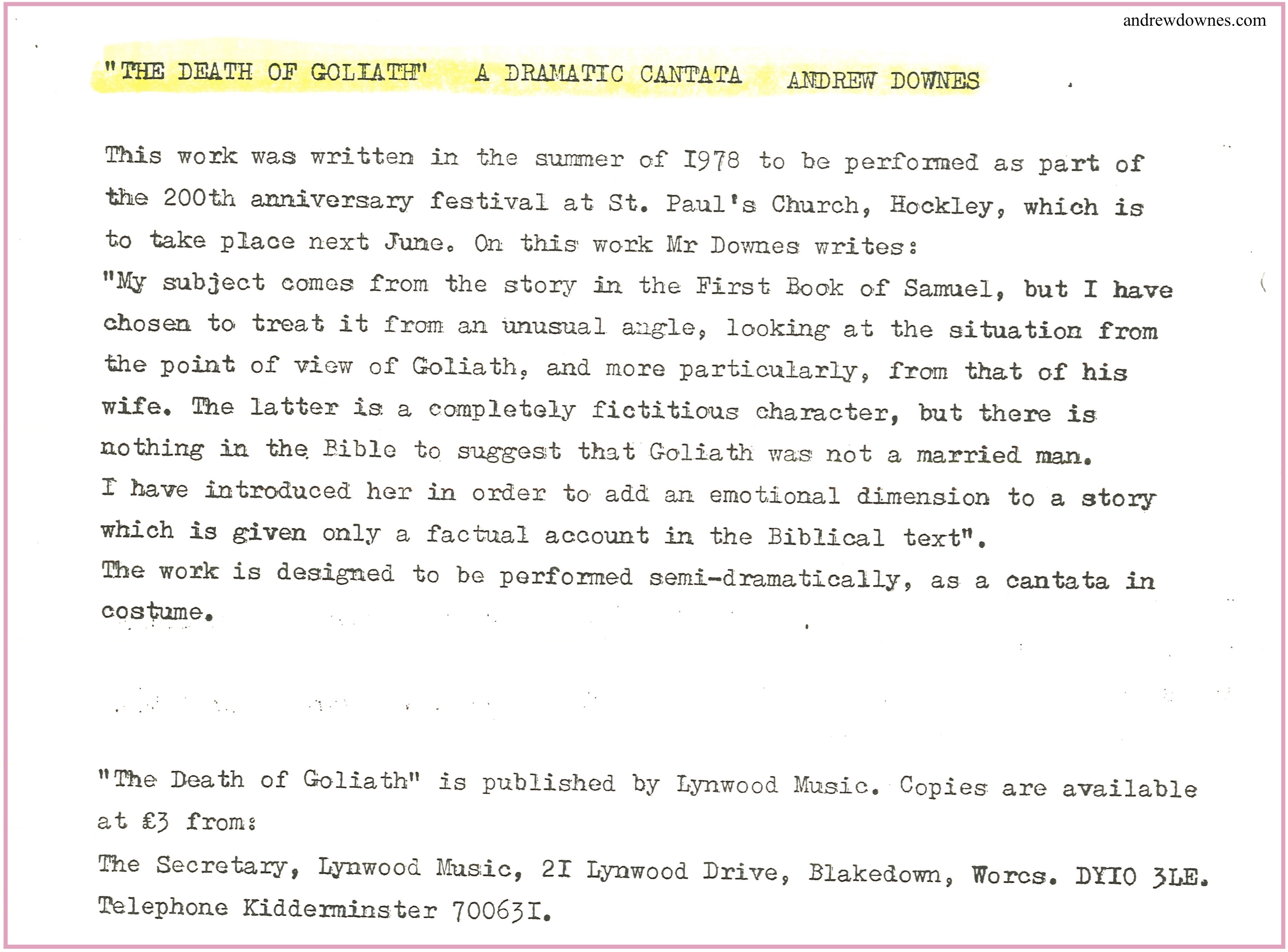 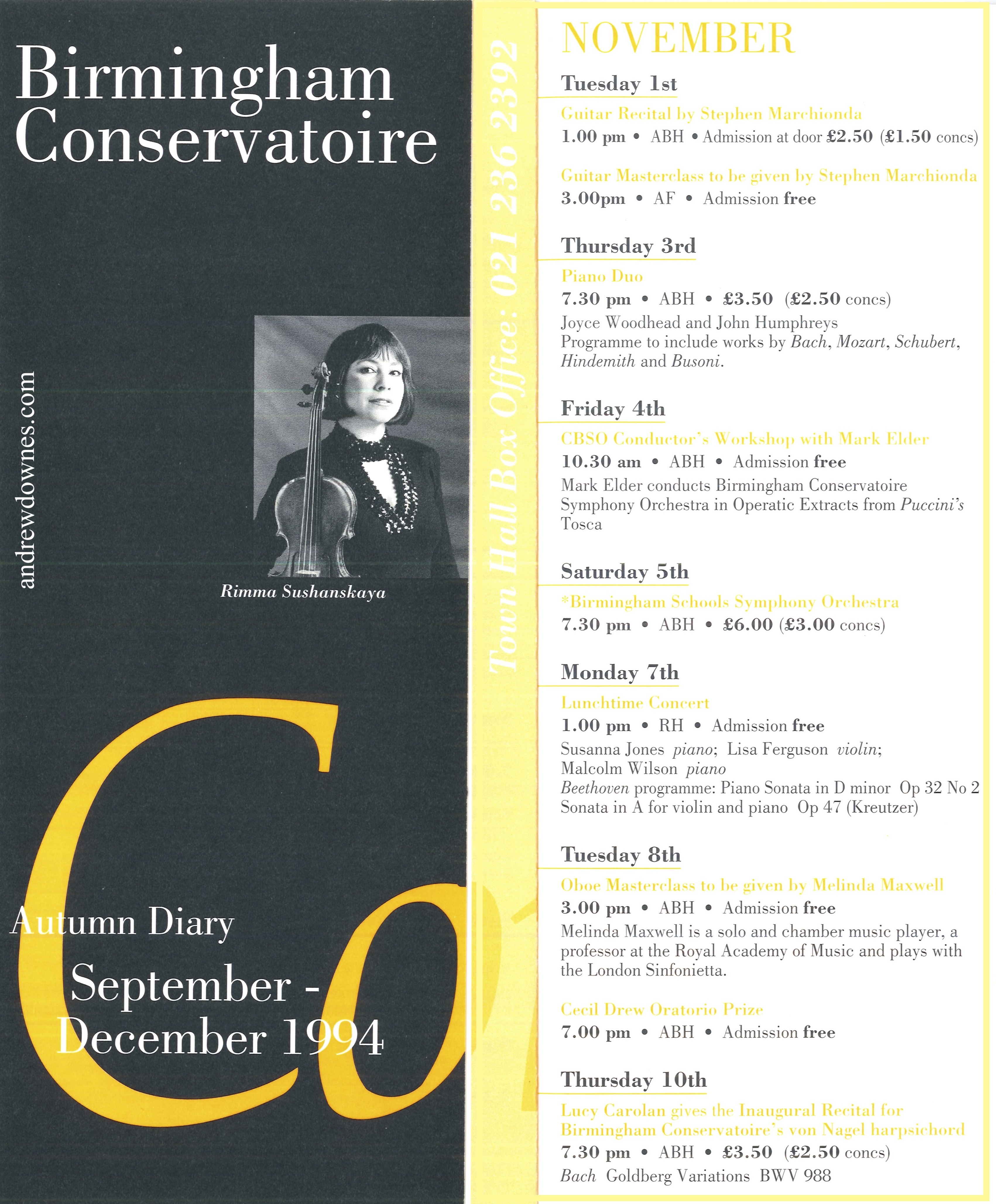 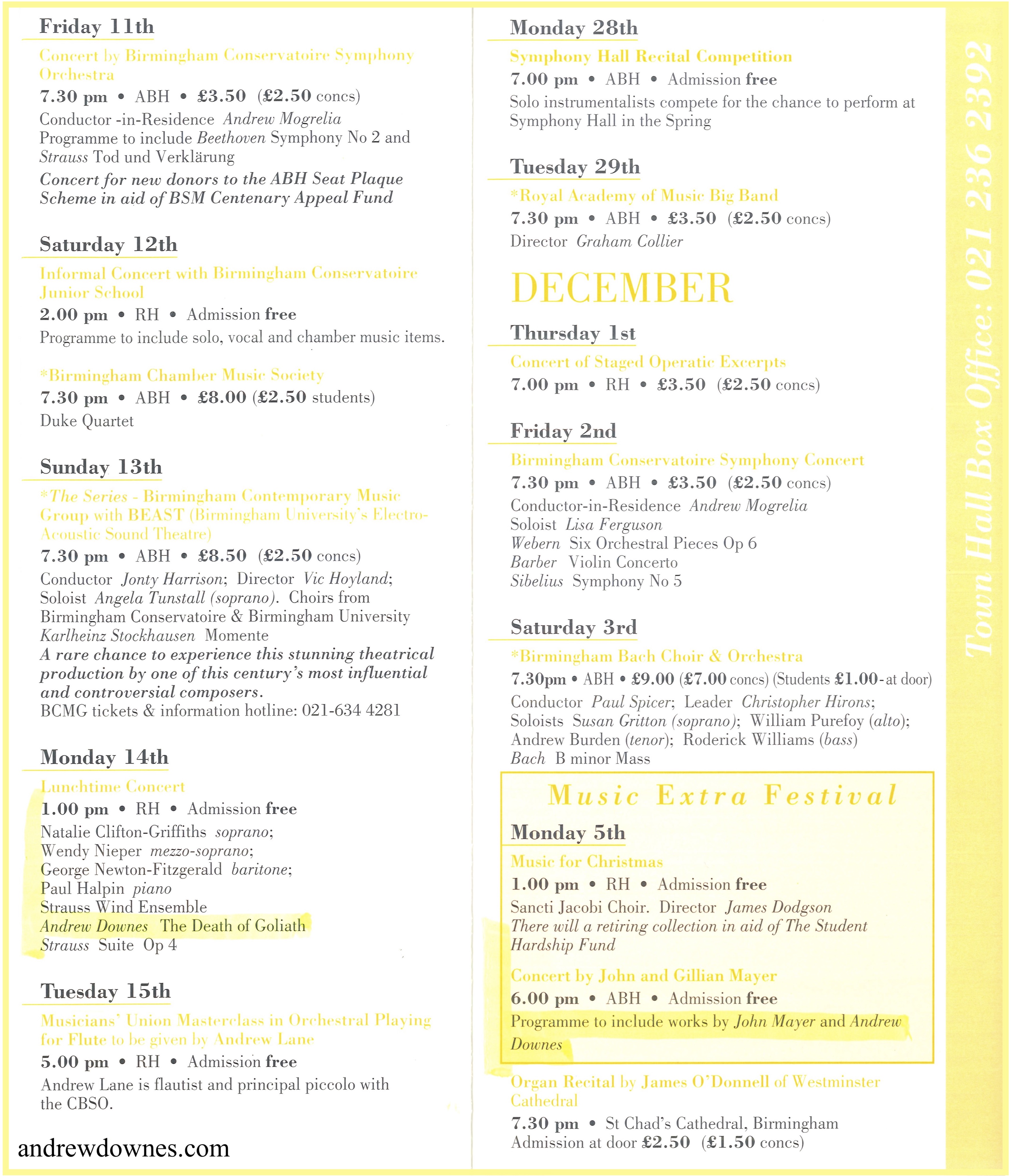 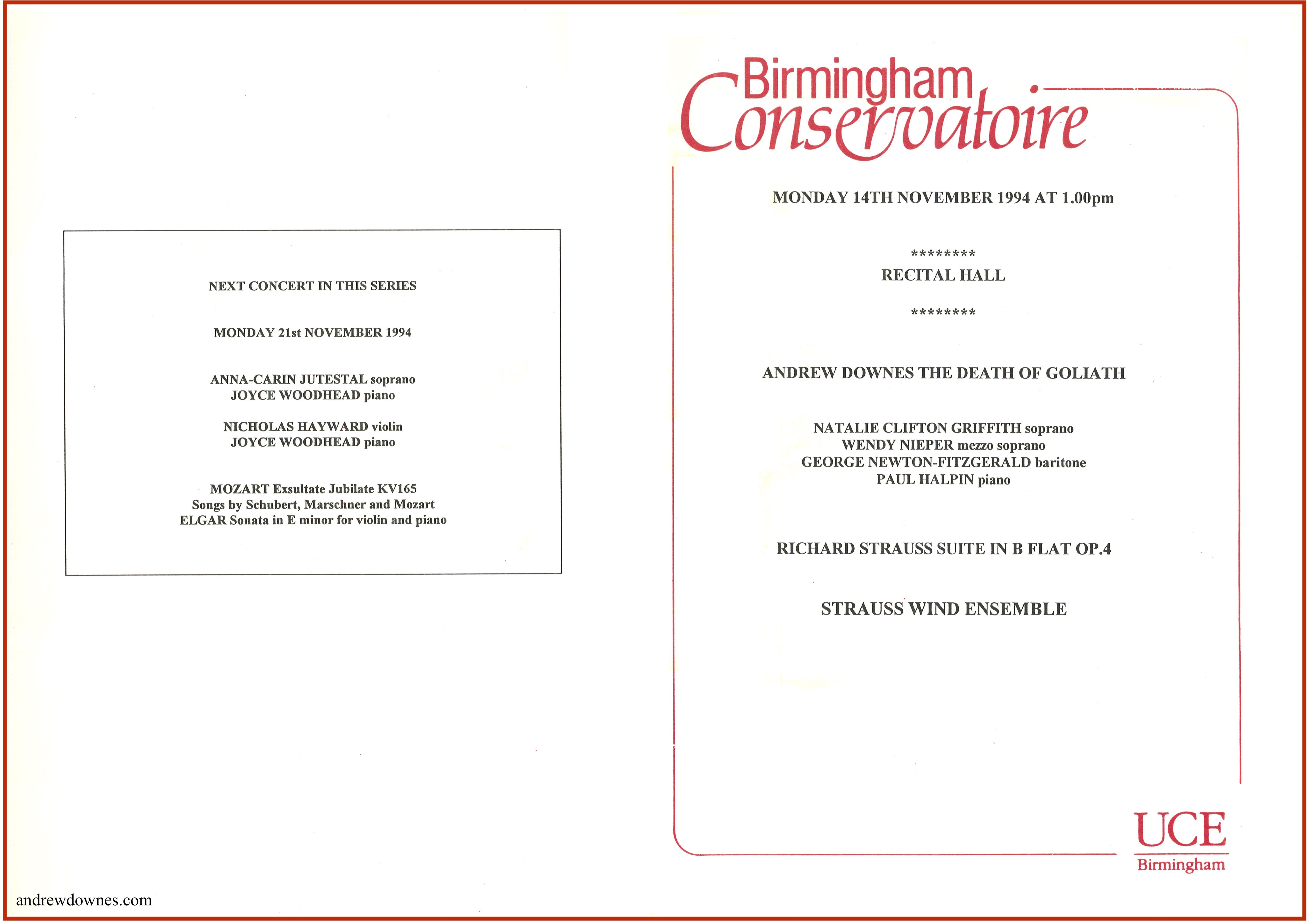 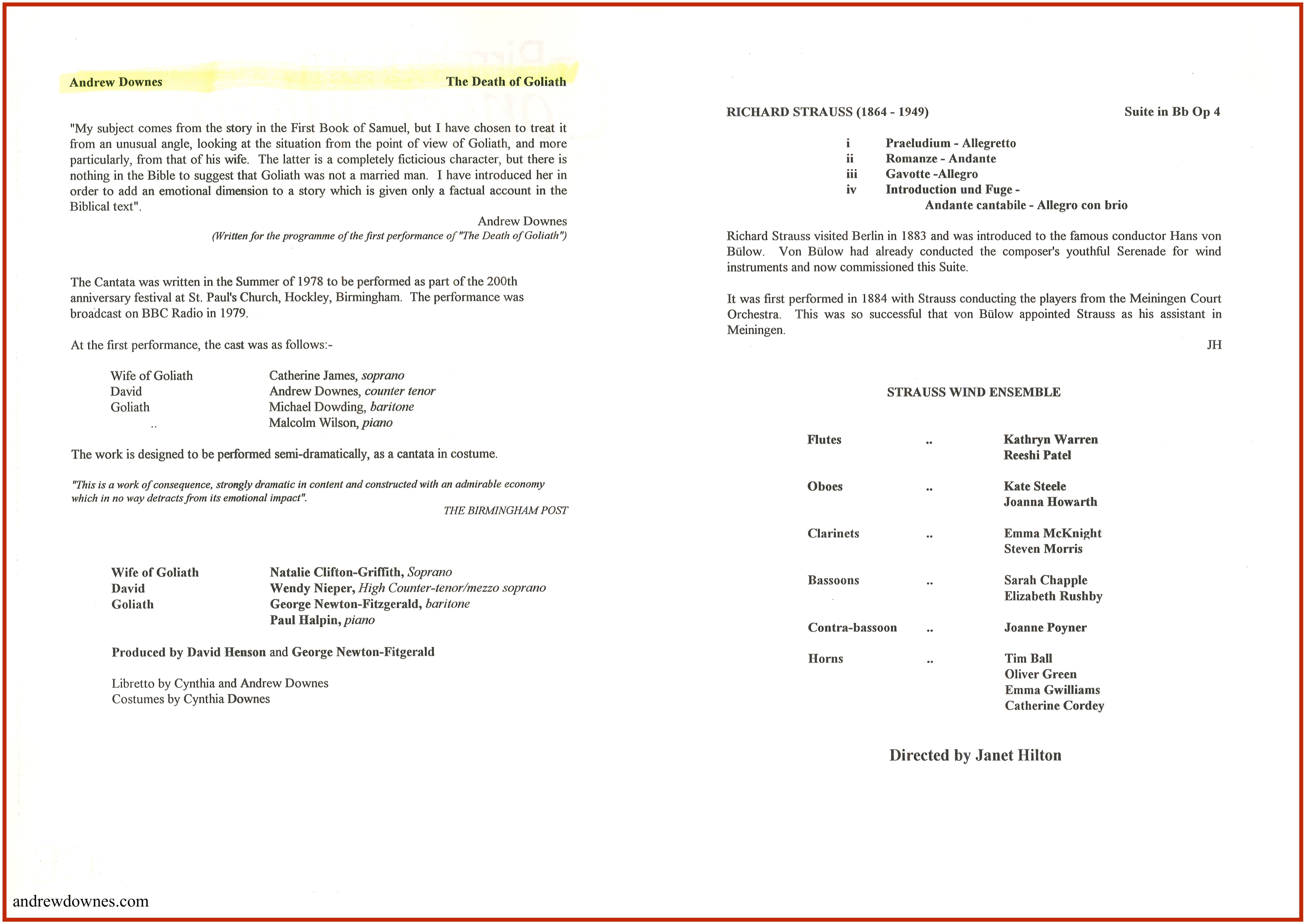 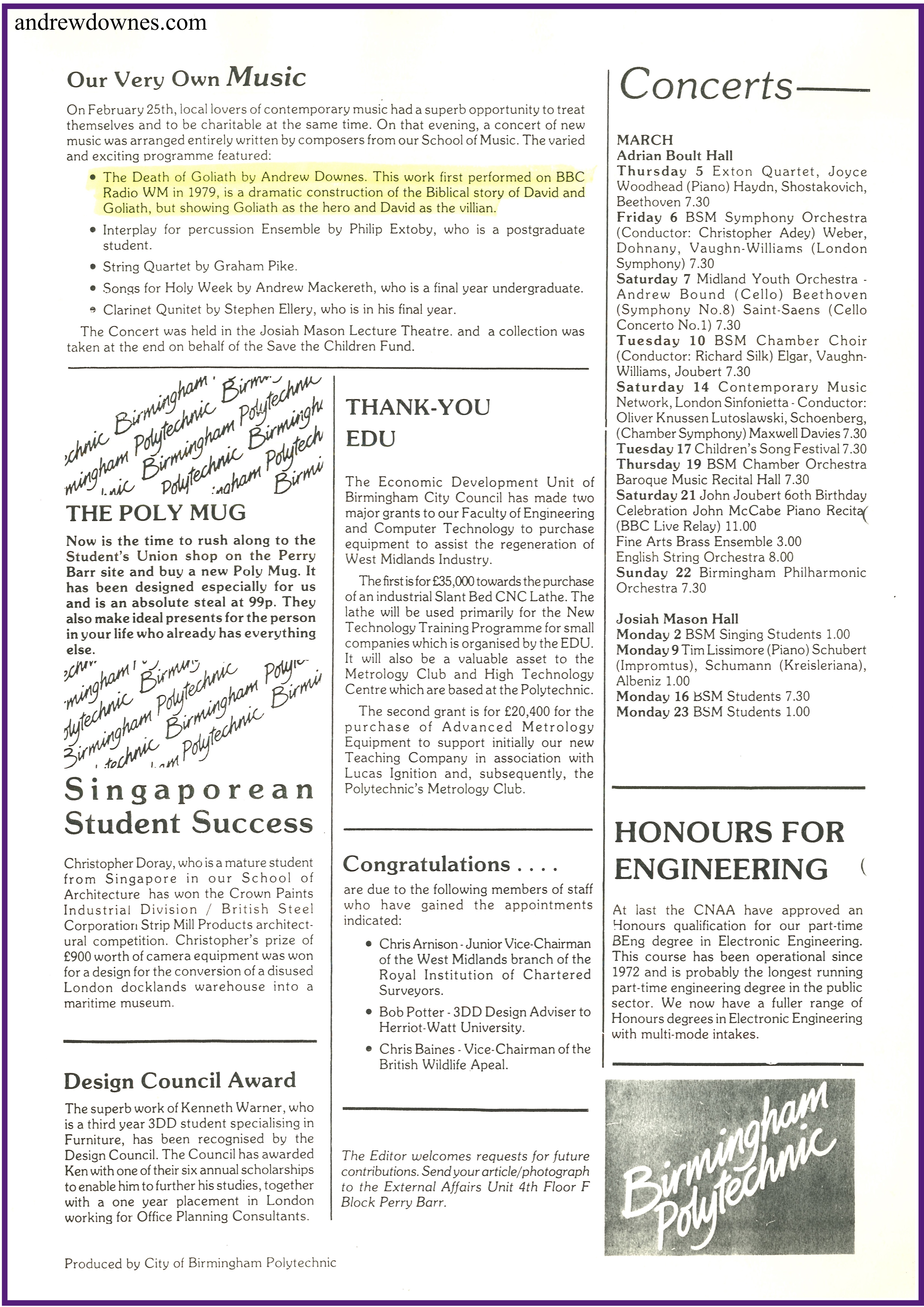 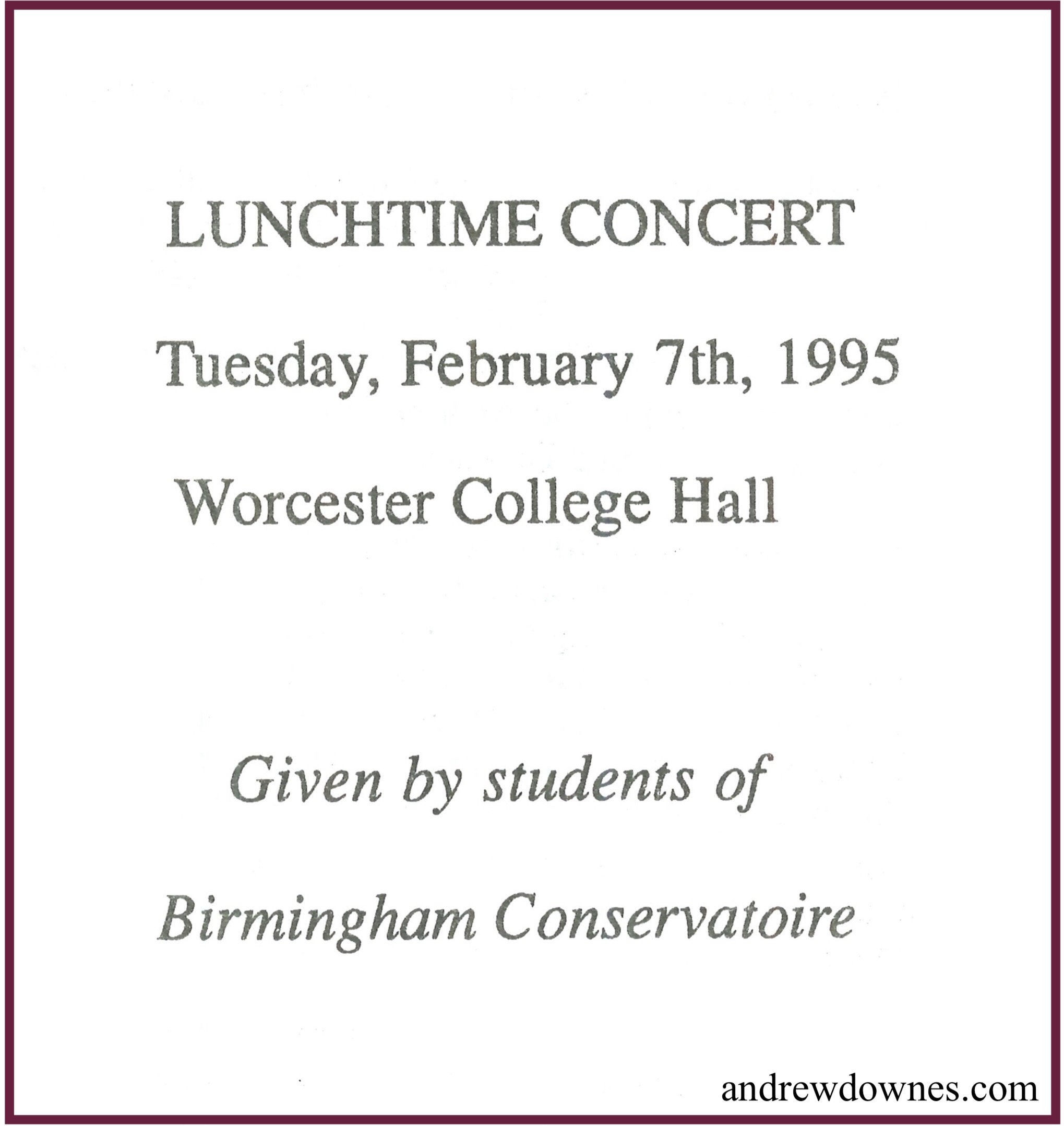 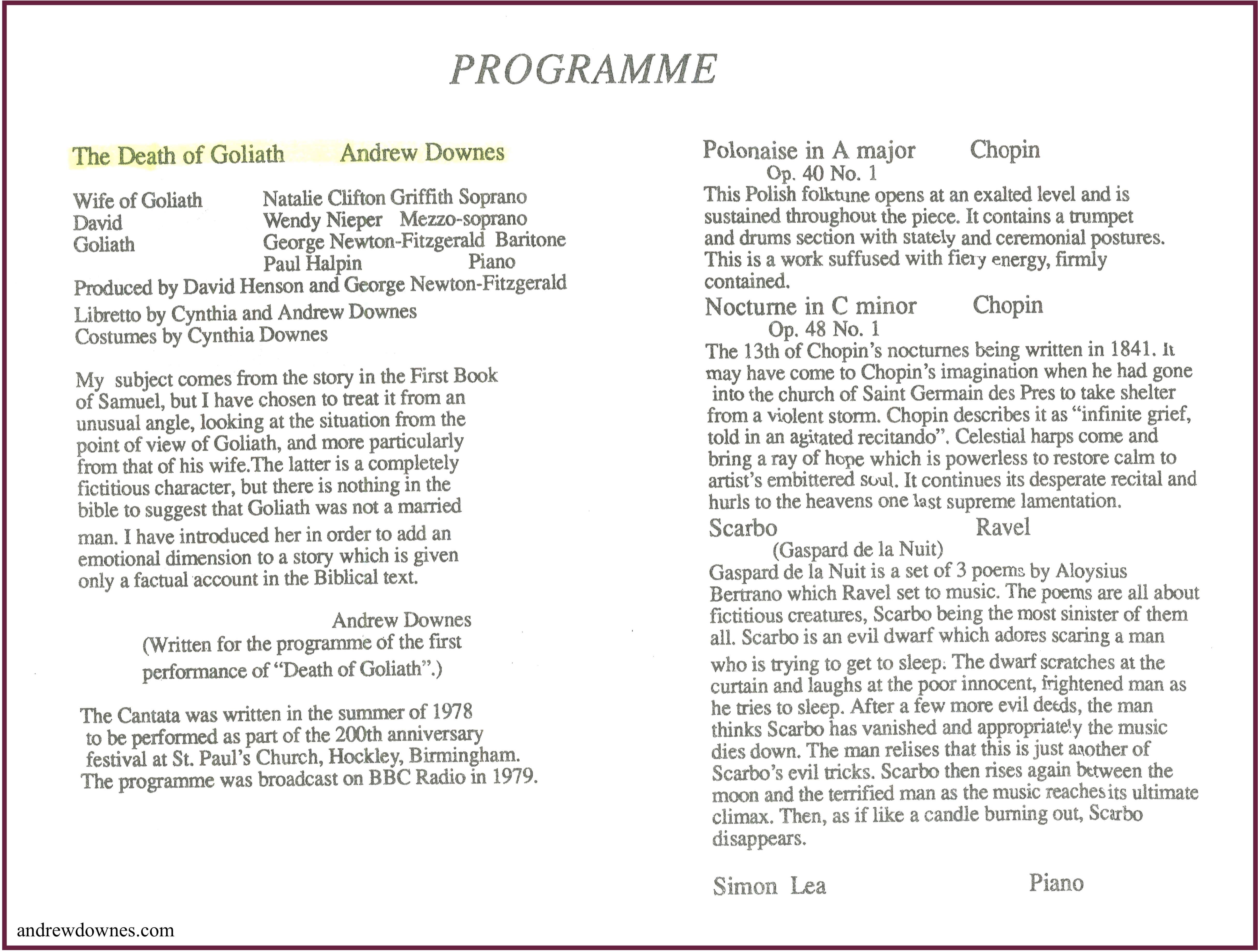