The Premiere Performance of Andrew Downes' The Ballad of St Kenelm

Did you perform in this work or come and watch? Please share below! 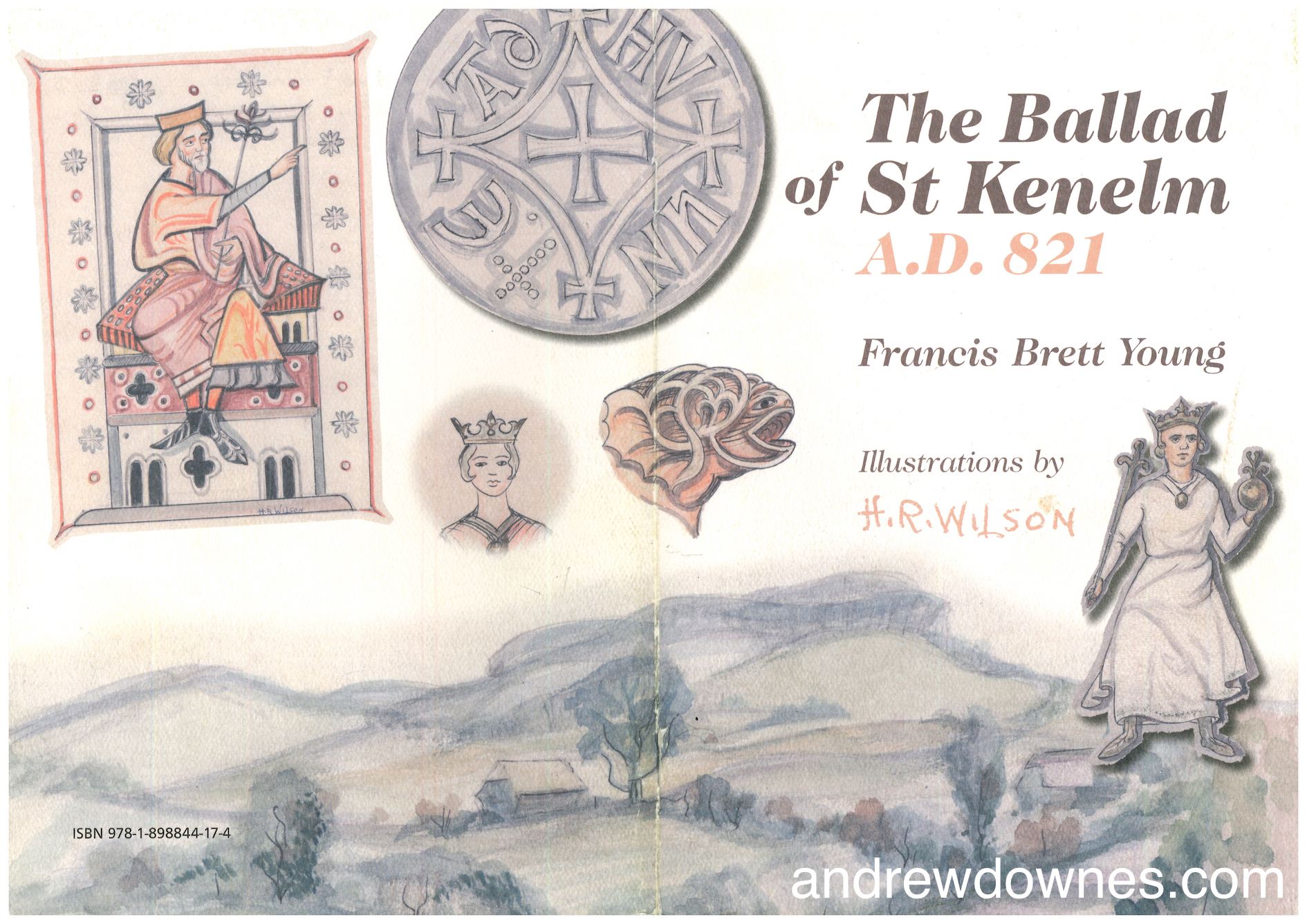 An account by his wife and publisher, Cynthia Downes, posted on March 29th, 2018

This work is a setting by Andrew of the long poem of the same name by Francis Brett Young (1884-1954), poet and novelist, who was born in Halesowen, just 5 miles from us in Hagley.

There is a thriving Francis Brett Young Society, whose President, Michael Hall, wanted to find a composer to set this beautiful poem by Brett Young to music.

The legend of St Kenelm means a lot to people in our area.  Kenelm was only 7 years old when his father, King Kenewulf of Mercia, died in AD 821. The young Kenelm became King for only a short time: his jealous sister had him murdered by her lover, by a stream over the Clent Hills, which rise up above our village. Kenelm's soul, in the form of a dove, flew to Rome, with a message telling the Pope where the child King was lying dead. A chantry was built at the place. People flocked there to be healed. Thus young King Kenelm became a saint.

Our neighbour, Pat Dunn, who lives across the road from us, recommended that the Brett Young Society should ask Andrew to compose the music.

Since I have put together a number of libretti with Andrew and produced his opera, Andrew asked for my input in this project too.  We had a meeting with Michael Hall and Pat, where we decided that we needed a narrator and a singer to tell the story and actors to mime/act it, plus a small orchestra. 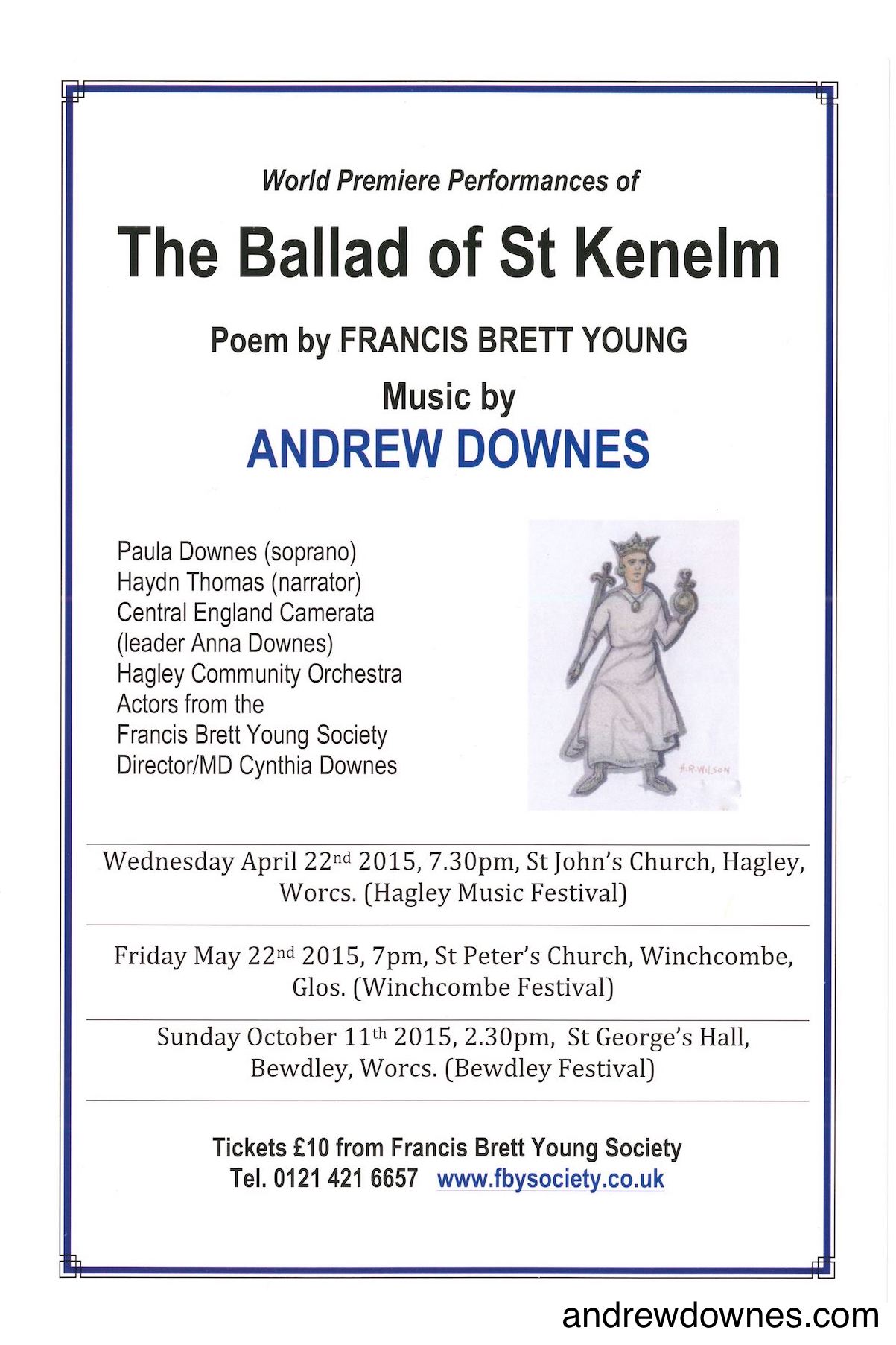 We asked our superb actor-neighbour, Haydn Thomas, to be the narrator, and the other verses were to be sung by our daughter, Paula.

The orchestra was to create the moods, depict the action and accompany Paula's singing.

I went through the poem and marked out the different sections for Andrew. From the first bar Andrew was inspired.

Andrew said he wanted me to conduct the work, because I knew it so well (not an easy undertaking because of all the time changes in the music). I also designed the action.

Michael had approached St Kenelm's school in Romsley, to ask if the pupils there would like to take part, but he couldn't arouse interest in the project. (Schools by this time had become very constrained by the National Curriculum, which left them no time outside their own productions.)

Fortunately our grandson, Oscar, was very willing to play the role of the boy King Kenelm. I taught him the part bit by bit and he was superb in the performance. His brother, our grandson Maxwell, played the part of a hunter with great dedication, and their Dad, Mike, made a perfect Saxon clerk! 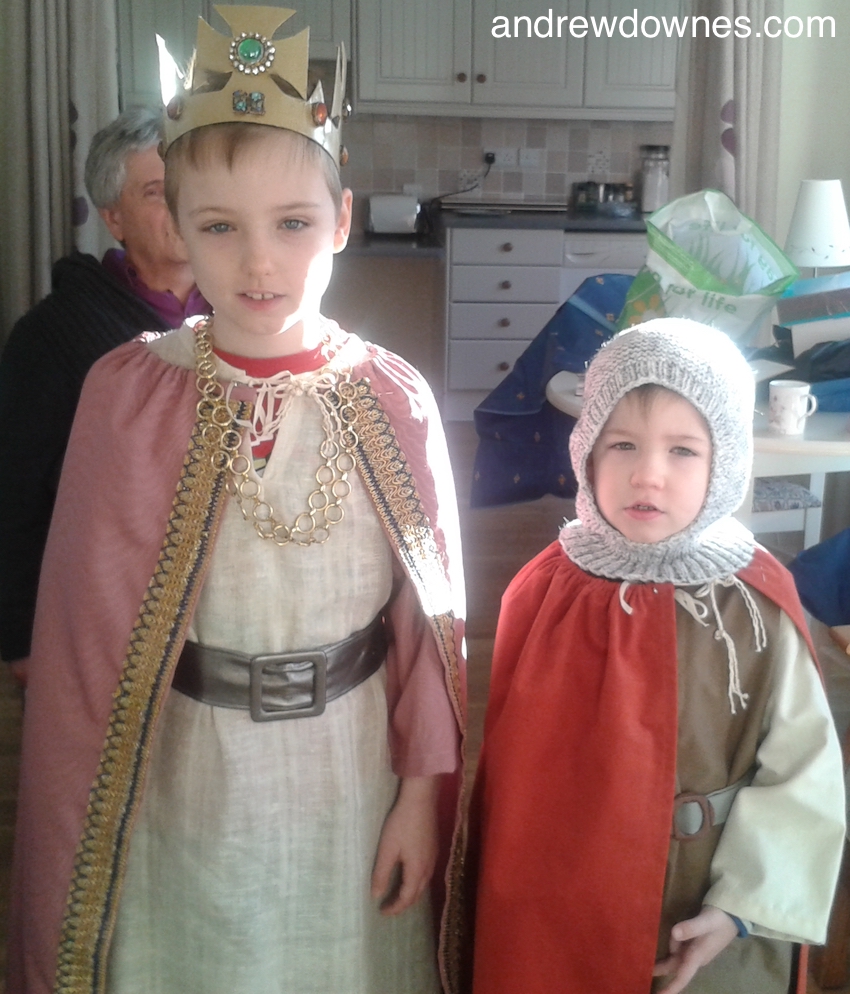 Grandsons Oscar as King Kenelm and Maxwell as a hunter.

Anna's friend, Alice Westbury, who taught drama and could also read music, agreed to be our Assistant Director. Her daughter, a beautiful dancer, was delighted to play the part of the dove. Other parts, for example the Pope, Cardinals and hunters, were taken by members of the Francis Brett Young Society. 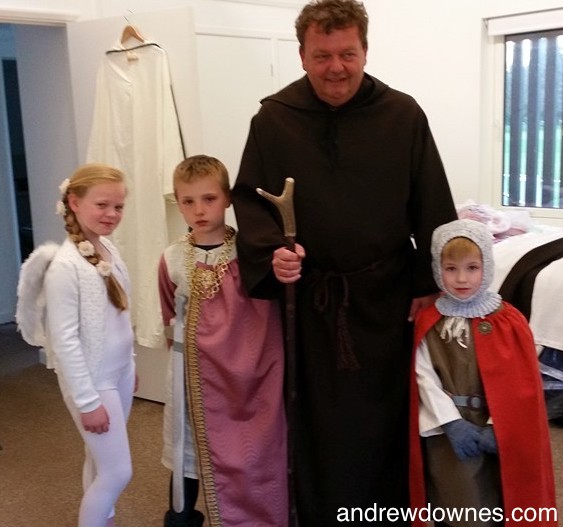 Alice's daughter as the Dove; Grandsons Oscar as King Kenelm and Maxwell as a hunter; son-in-law Mike Price as a Saxon Clerk

The orchestra, led by Anna, had their parts in advance, and we just had one orchestral rehearsal before the dress rehearsal.  I held quite a few rehearsals with the actors, using an electronic version of the music. 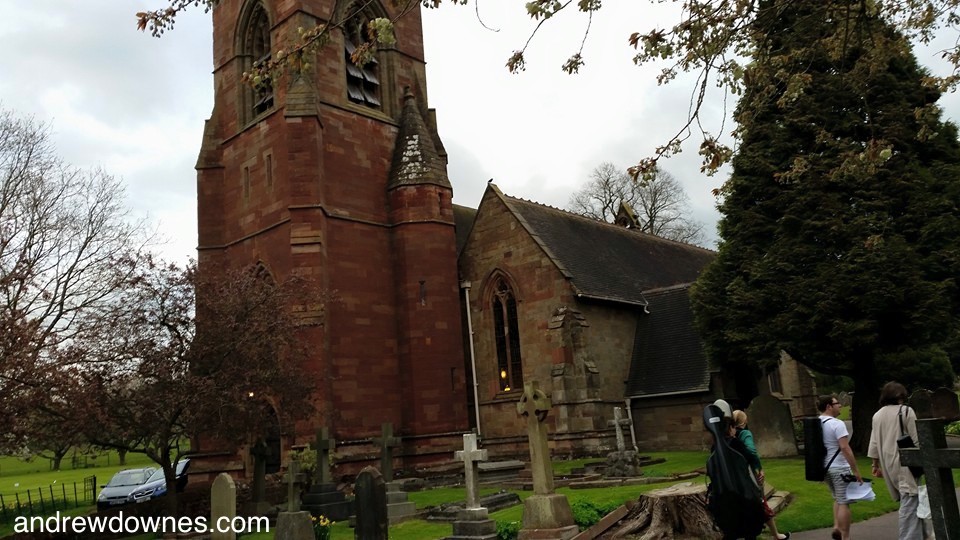 Members of the orchestra arriving for a rehearsal at St John's Church, Hagley, Worcestershire

On the orchestral rehearsal day, Andrew suddenly fell ill. I suspected a stroke and called 999. Paramedics arrived quickly and discovered that his blood pressure was astronomically high (250 over 165). Even though Andrew protested he felt ok, as he always does(!), the paramedics said they had to take him to A&E. Andrew insisted I should carry on with the rehearsal. So Andrew's carer went with him in the ambulance to Russell's Hall hospital. Half way through the rehearsal I had a phone call summoning me to the hospital. Paula had to continue the rehearsal in my absence, singing and conducting at the same time.

I drove to Russell's Hall in terrible trepidation, not knowing what to expect. The doctor told me that Andrew had a 50% chance of pulling through. He had had a brain haemorrhage. But there was the chance of the blood being reabsorbed.

Andrew had a convulsion that evening and he lost his speech. I'll always be grateful for all the prayers said for him by so many of our Facebook friends, who responded to Anna's message, and quite a few churches.

Miraculously, over the next 4 days, Andrew gradually recovered. He was still recuperating in hospital when we gave the world premiere of his Ballad of Saint Kenelm.  Everyone gave their all at this performance, knowing how ill Andrew was. 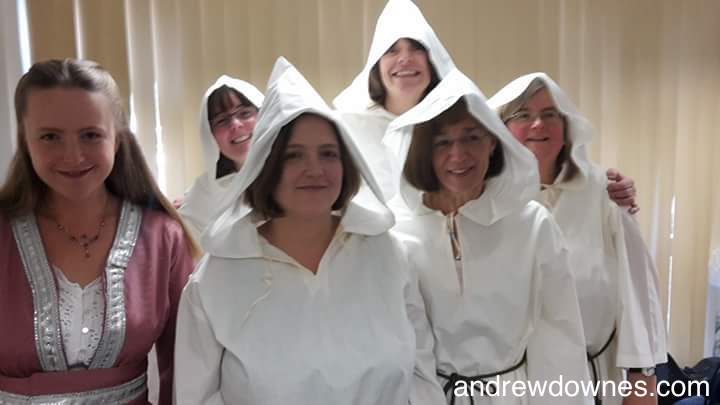 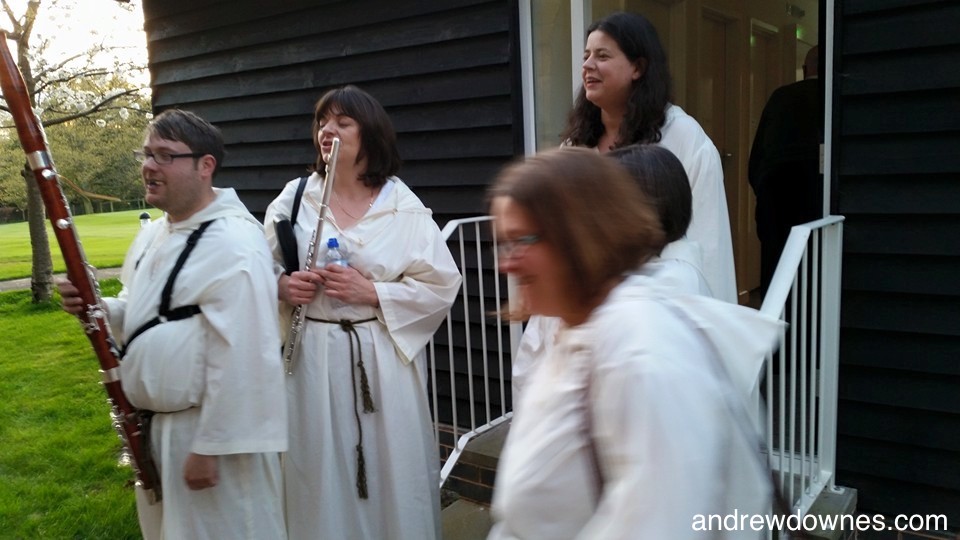 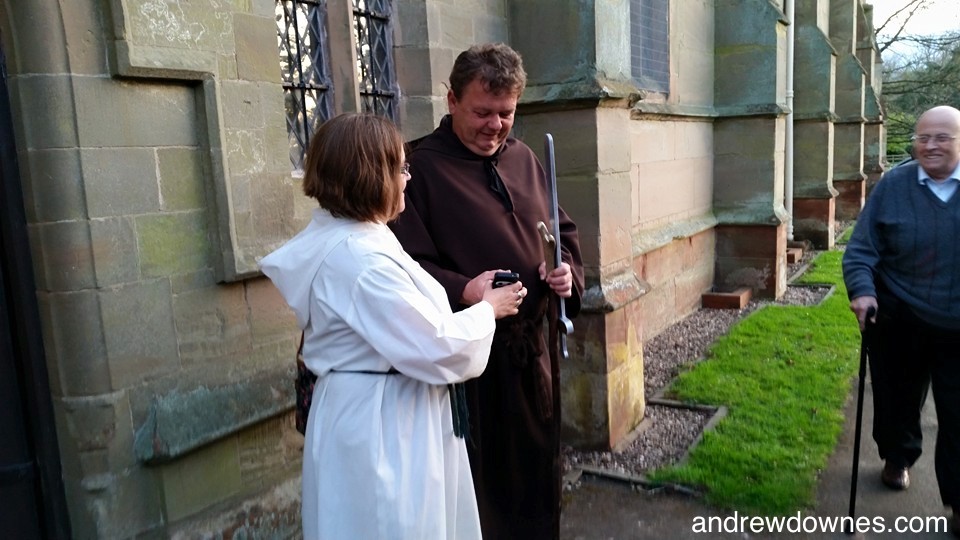 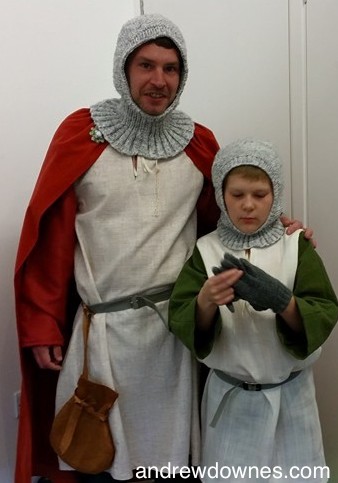 Andrew was, however, back to his old self for our second performance, one month later, in Winchcombe Parish Church (where Kenelm was buried). One of the orchestral players, on seeing Andrew there, said: "It's like the resurrection of Jesus Christ!" 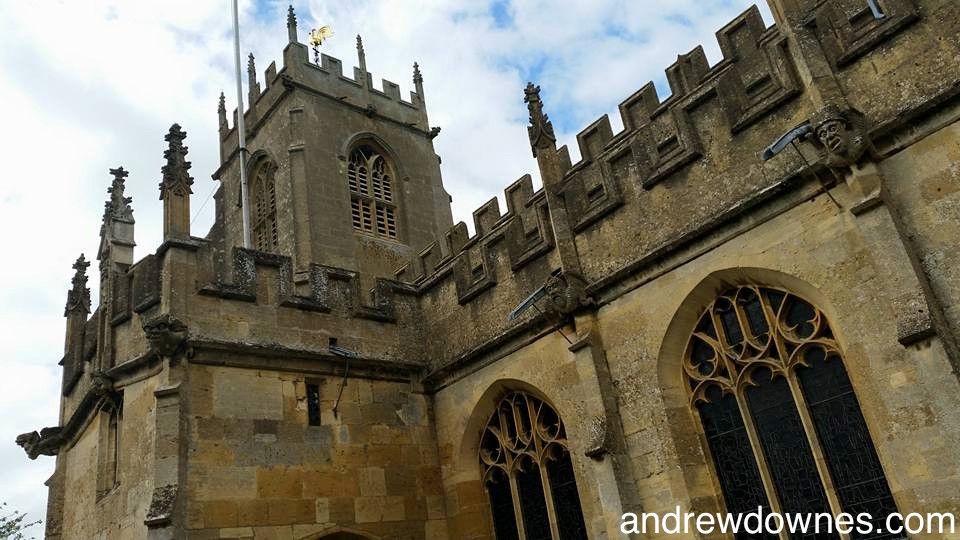 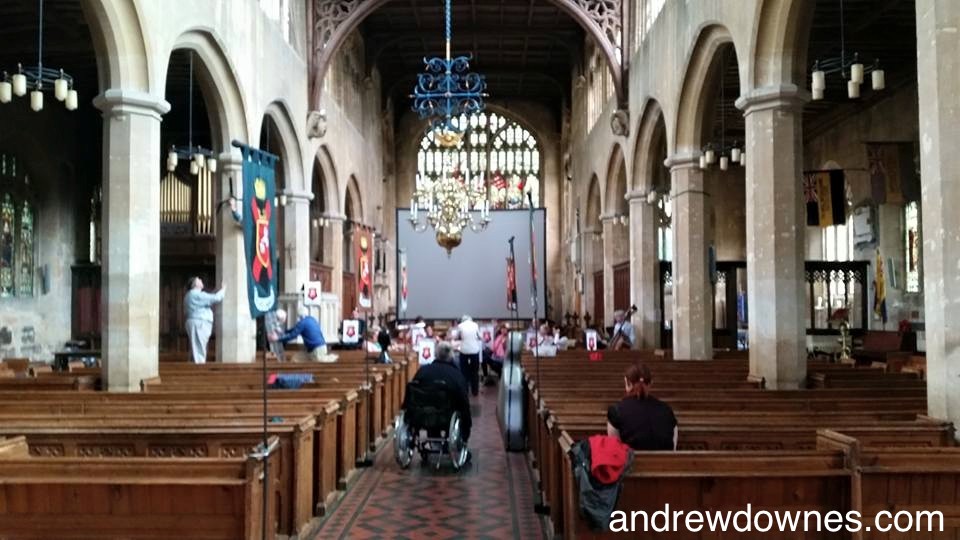 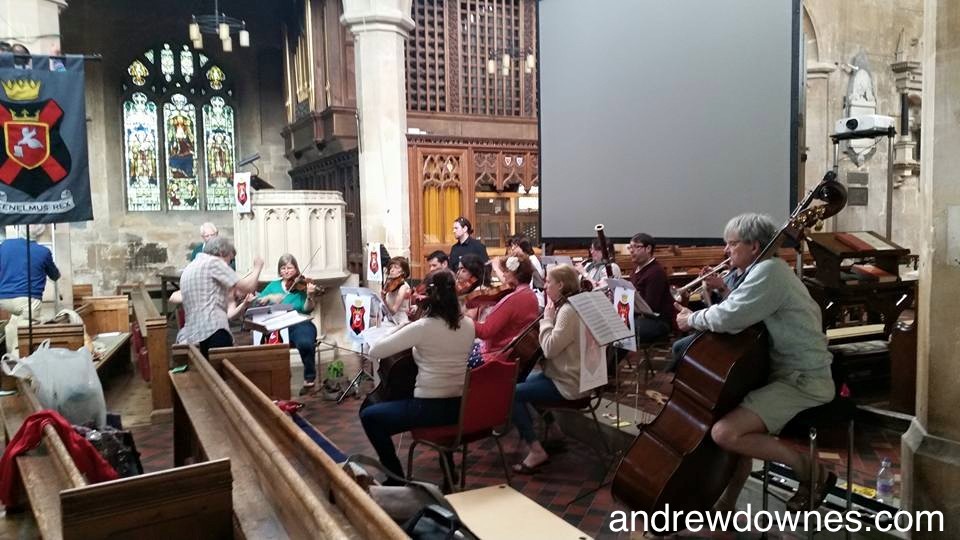 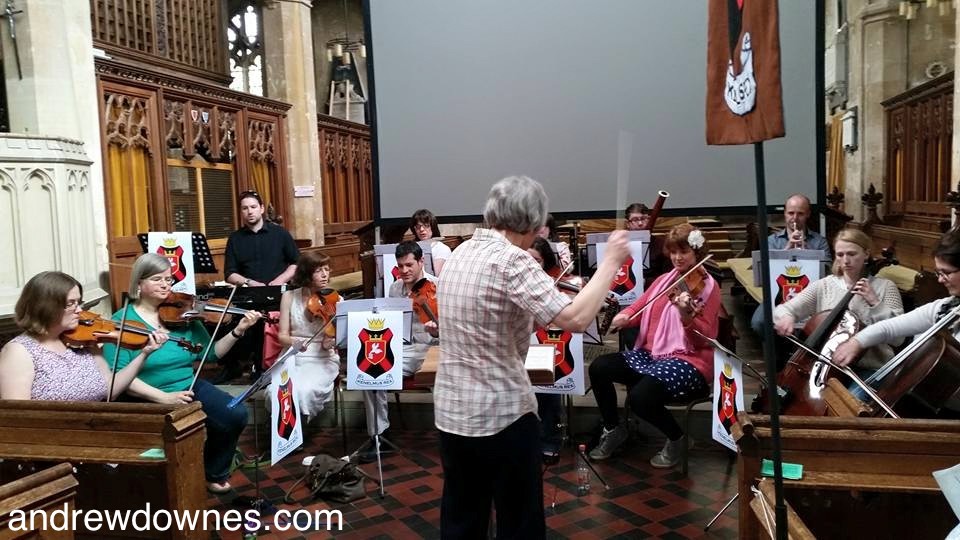 Andrew was also at the 3rd performance, which we gave at the Bewdley Festival, and we have a wonderful DVD made by Diabolus Music of the best moments of the first 3 performances. 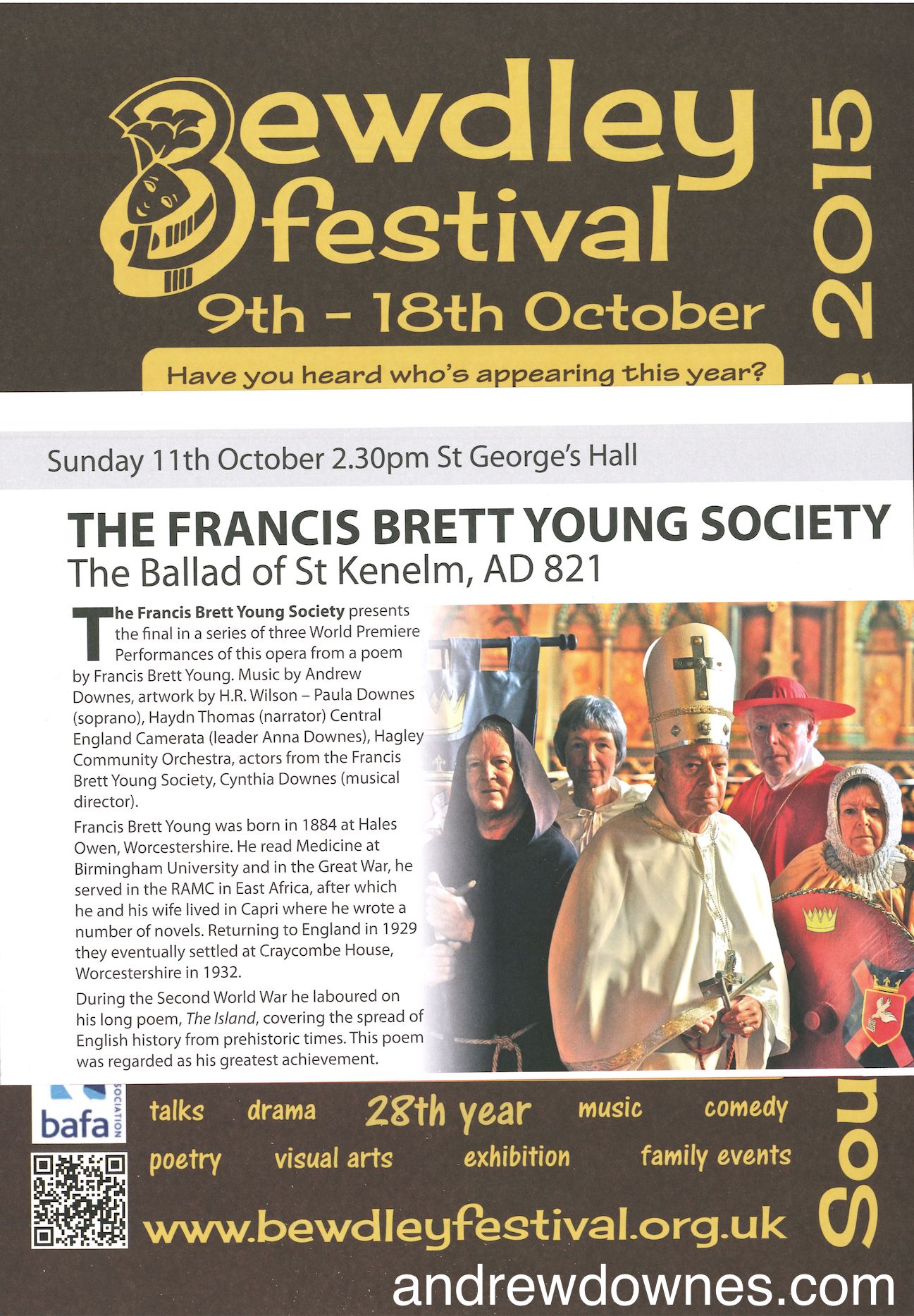 Our 4th performance, ironically, took place at St Kenelm's school. It was hosted by the Romsley historical Society. St Kenelm's Church, which was built at the spot where the child King Kenelm was slain, is very close to the school.  About a week before the concert, I went to the church to take some flyers and went down to the spring where it all happened.  It is at the back of the church, down a narrow slippery path, so Andrew unfortunately couldn't come with me. I was filled with awe when I saw the spring. There is a very special atmosphere there.

Paula, our soprano soloist, was keen to do the work again and so contacted Local and Live in Stourbridge. We gave our 5th performance in June 2018 in St James Church, Wollaston, as part of the Local and Live Concert series.

I think this performance was our best. Everyone knew it so well after 4 previous performances and could give their all to this moving story with its beautiful poetry and music.

Photos of the Local & Live Performance, 2018 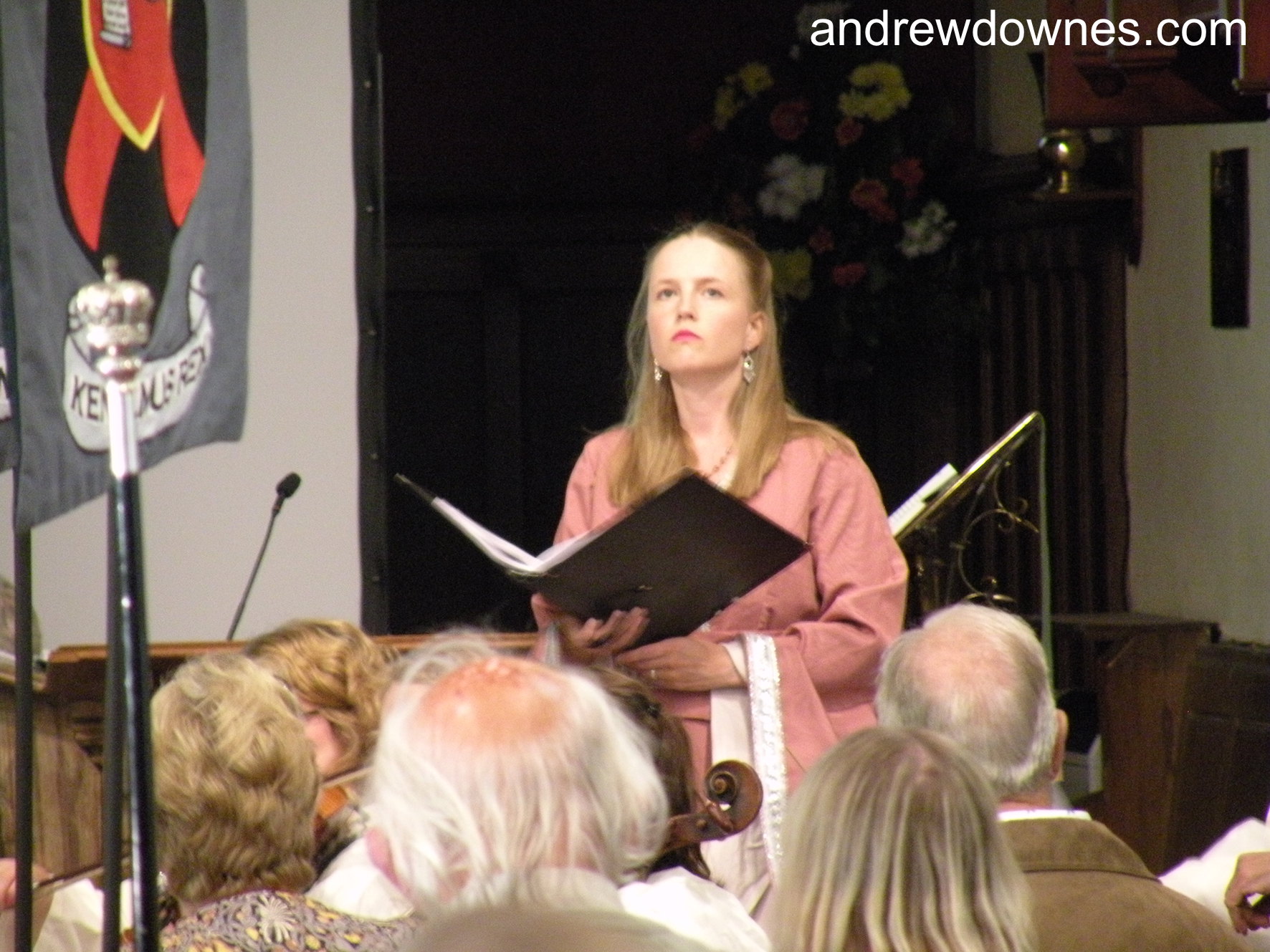 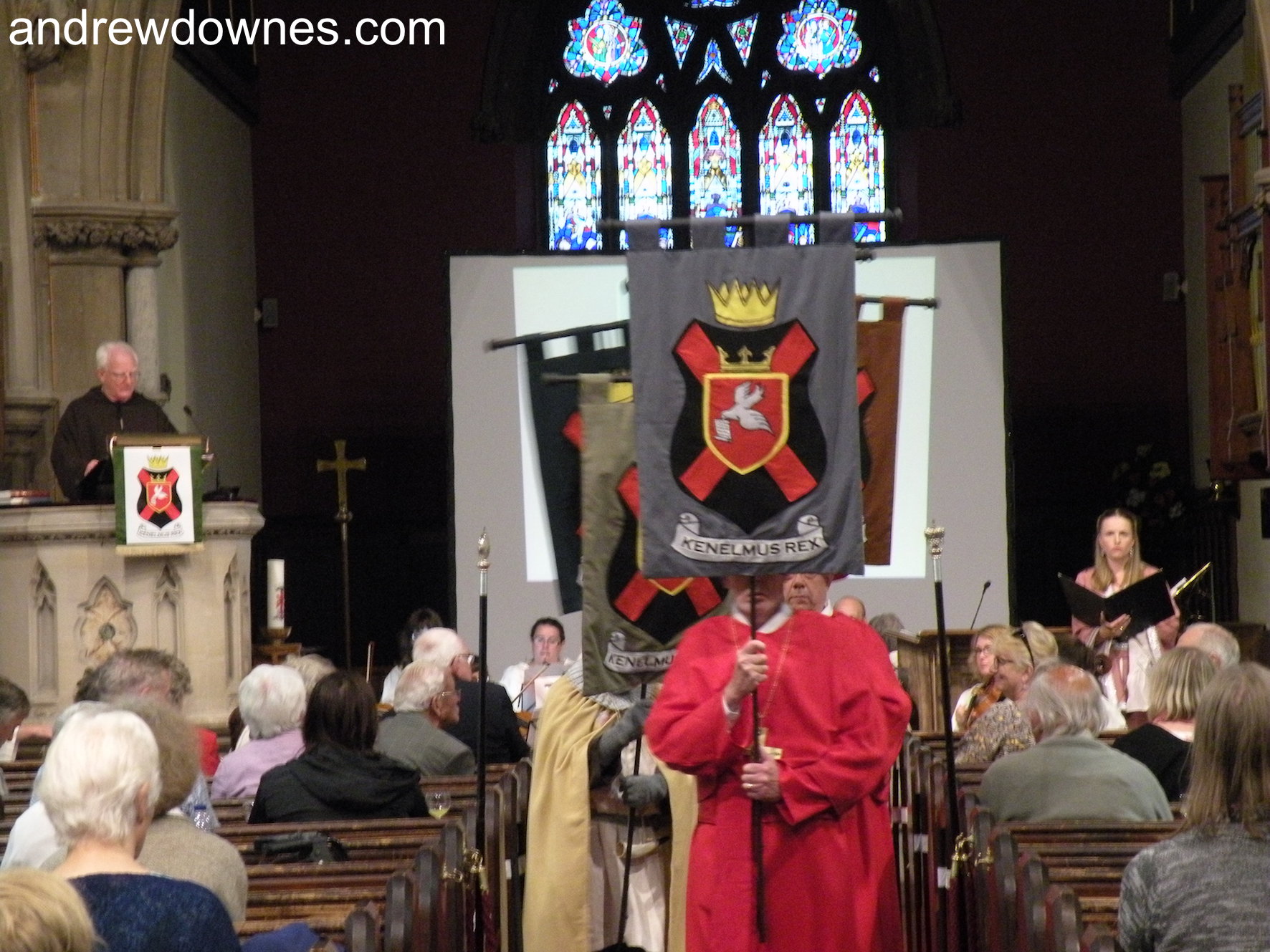 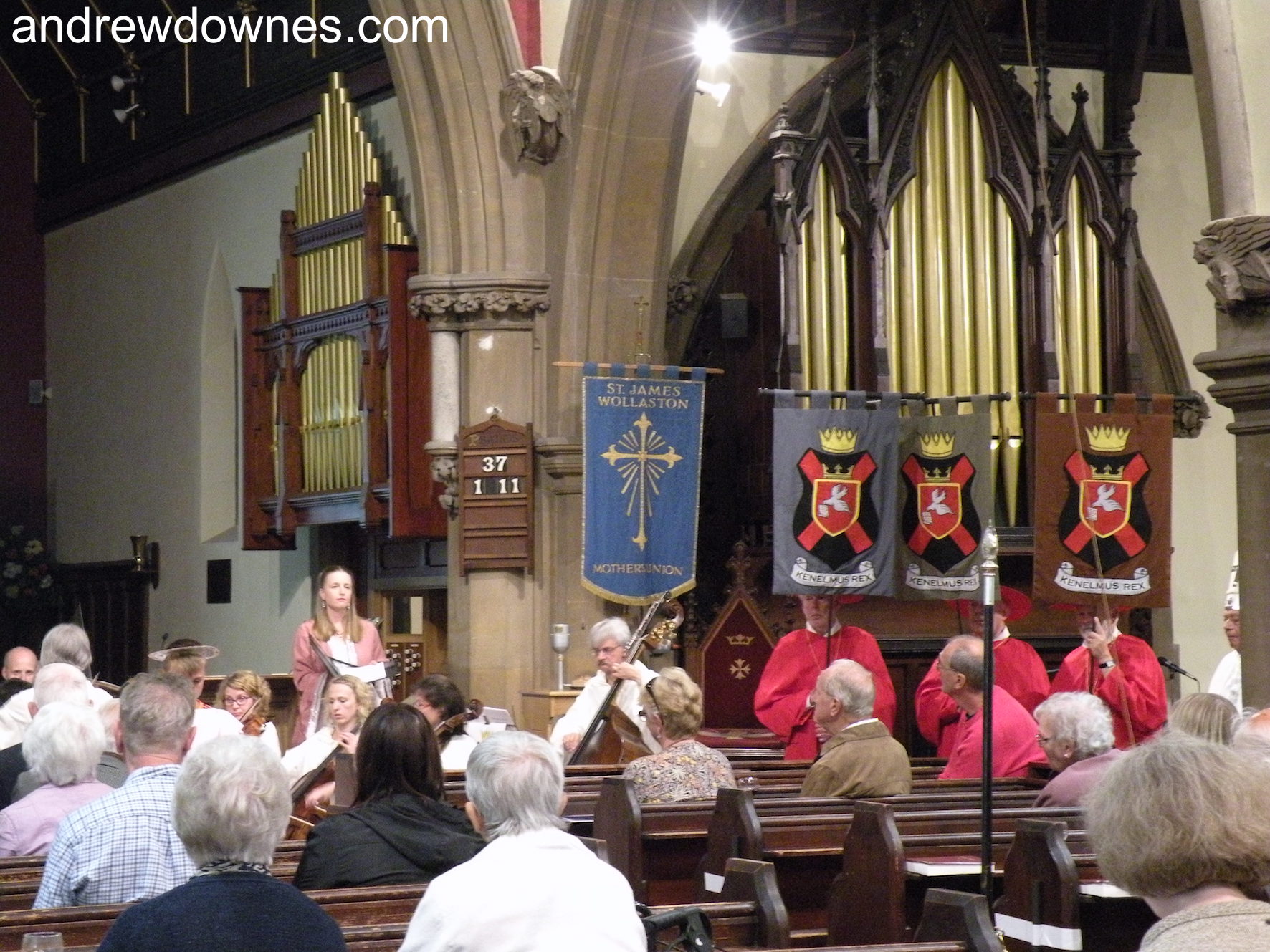 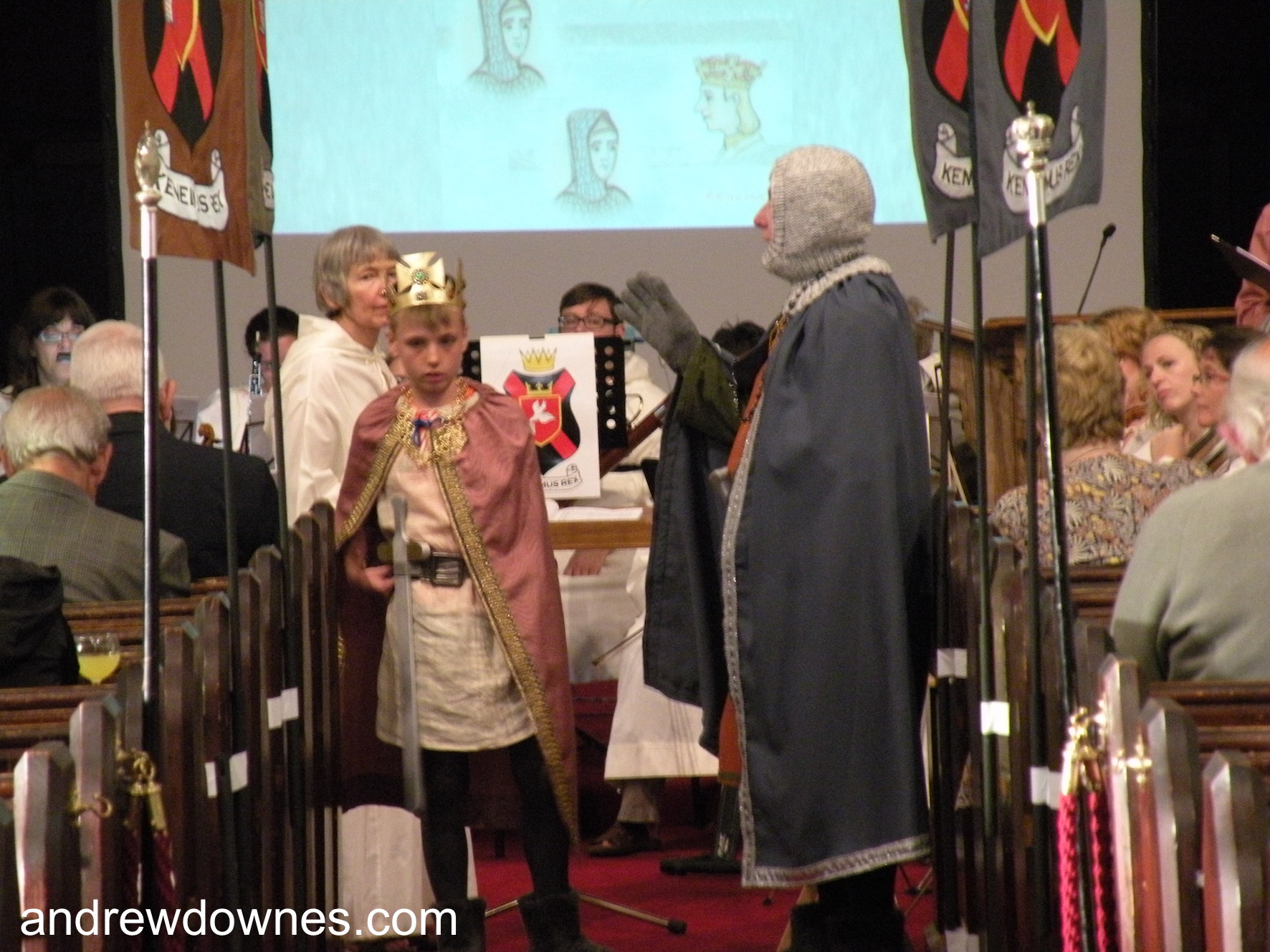 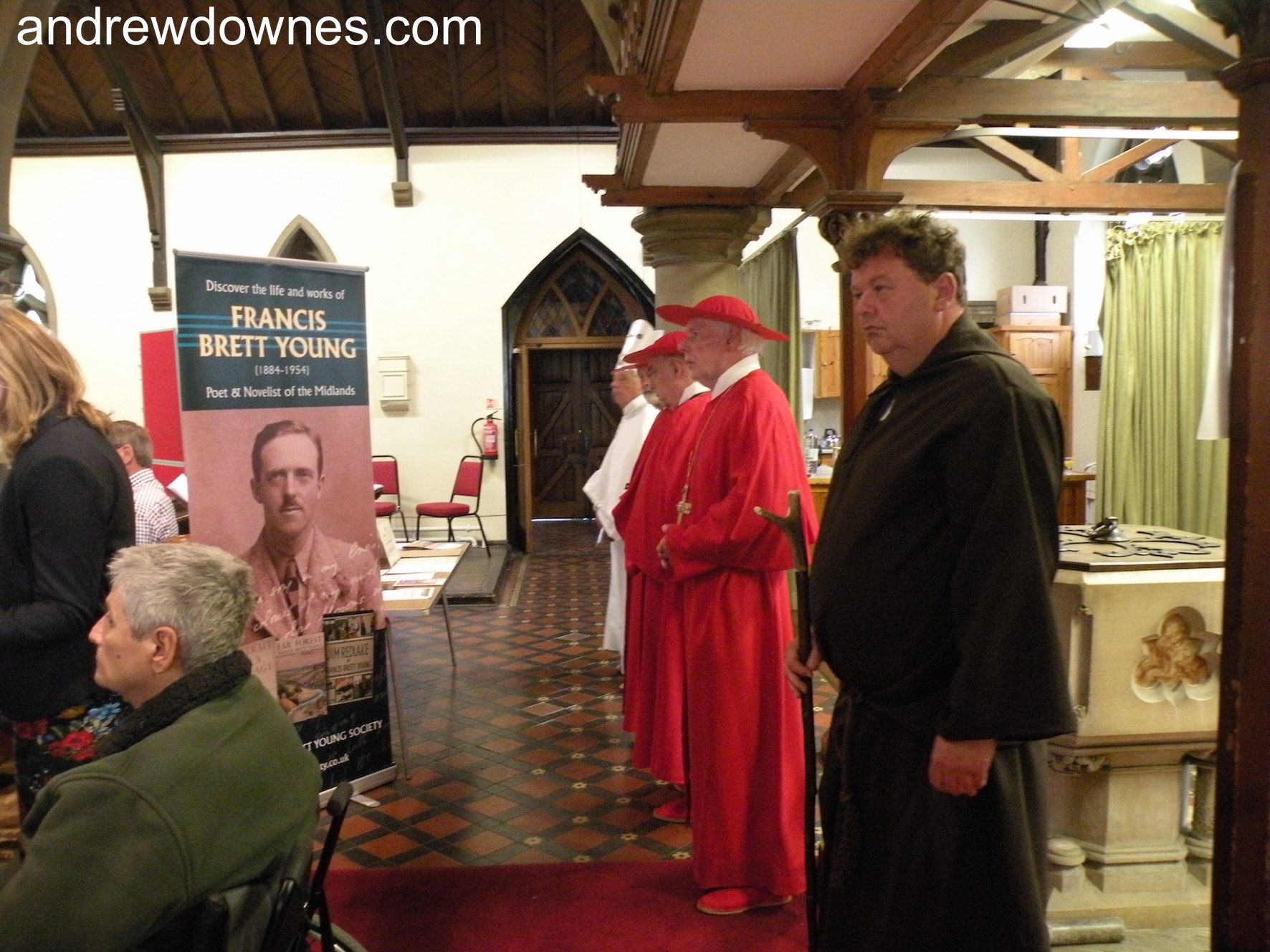 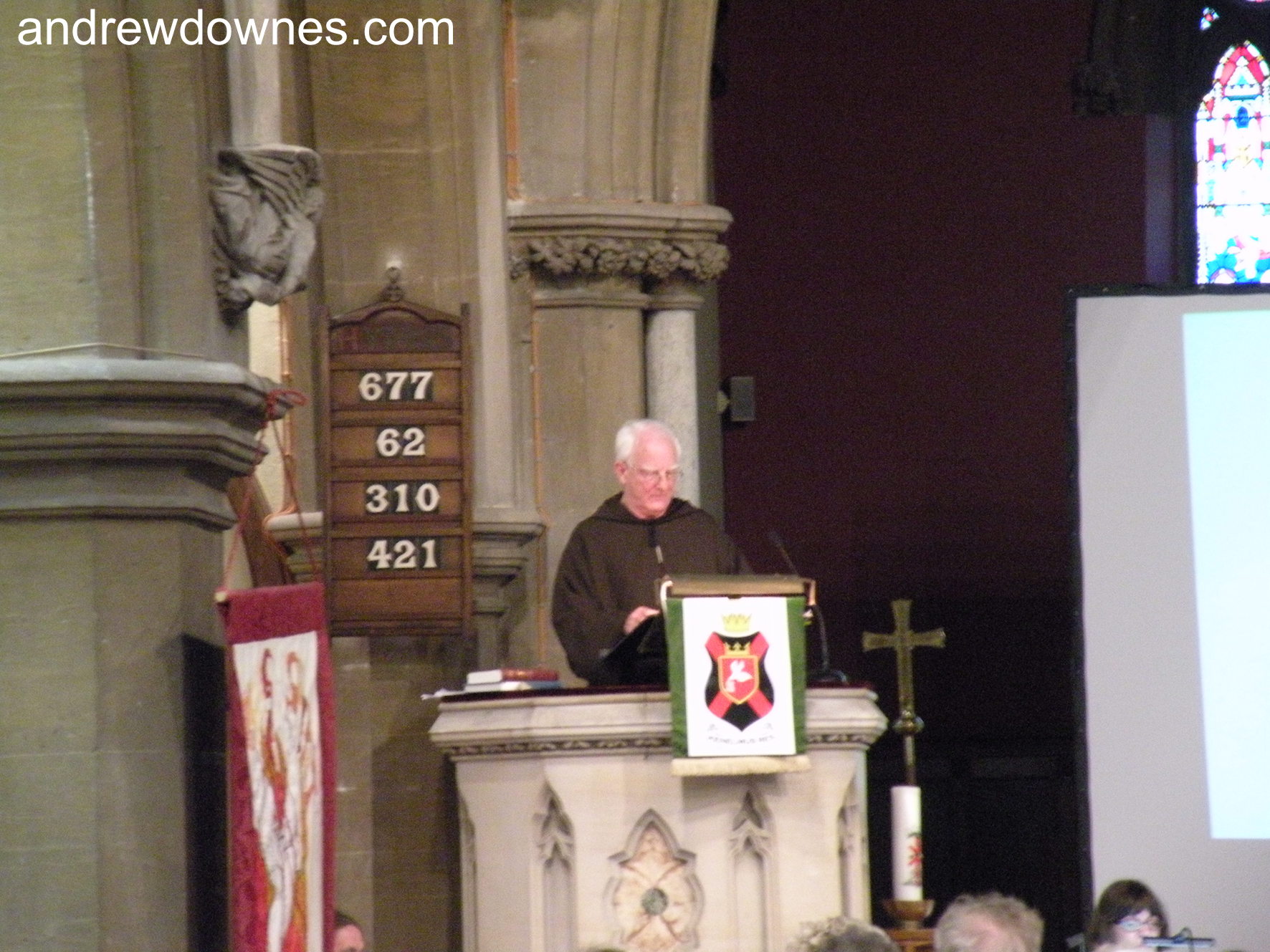 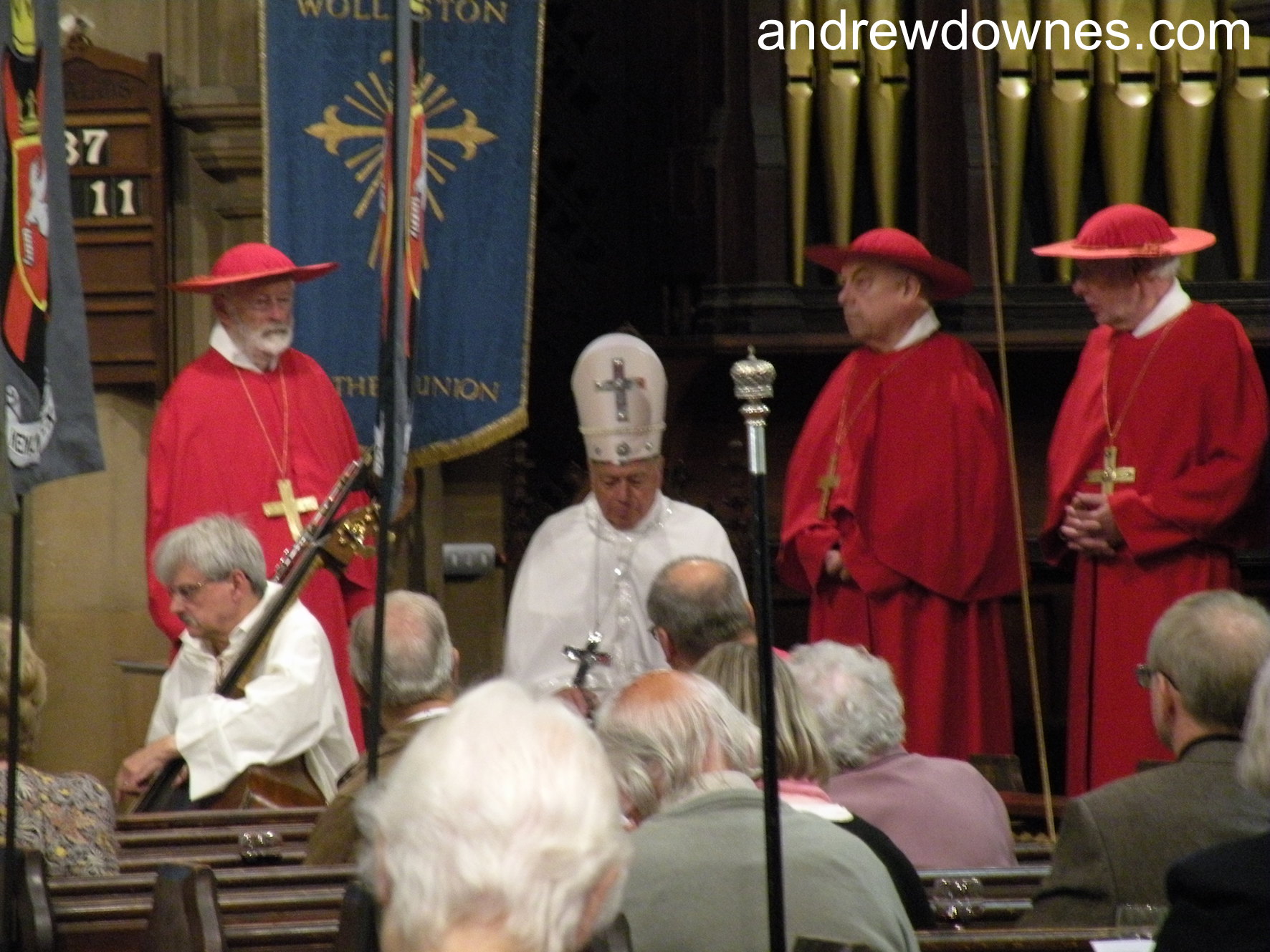 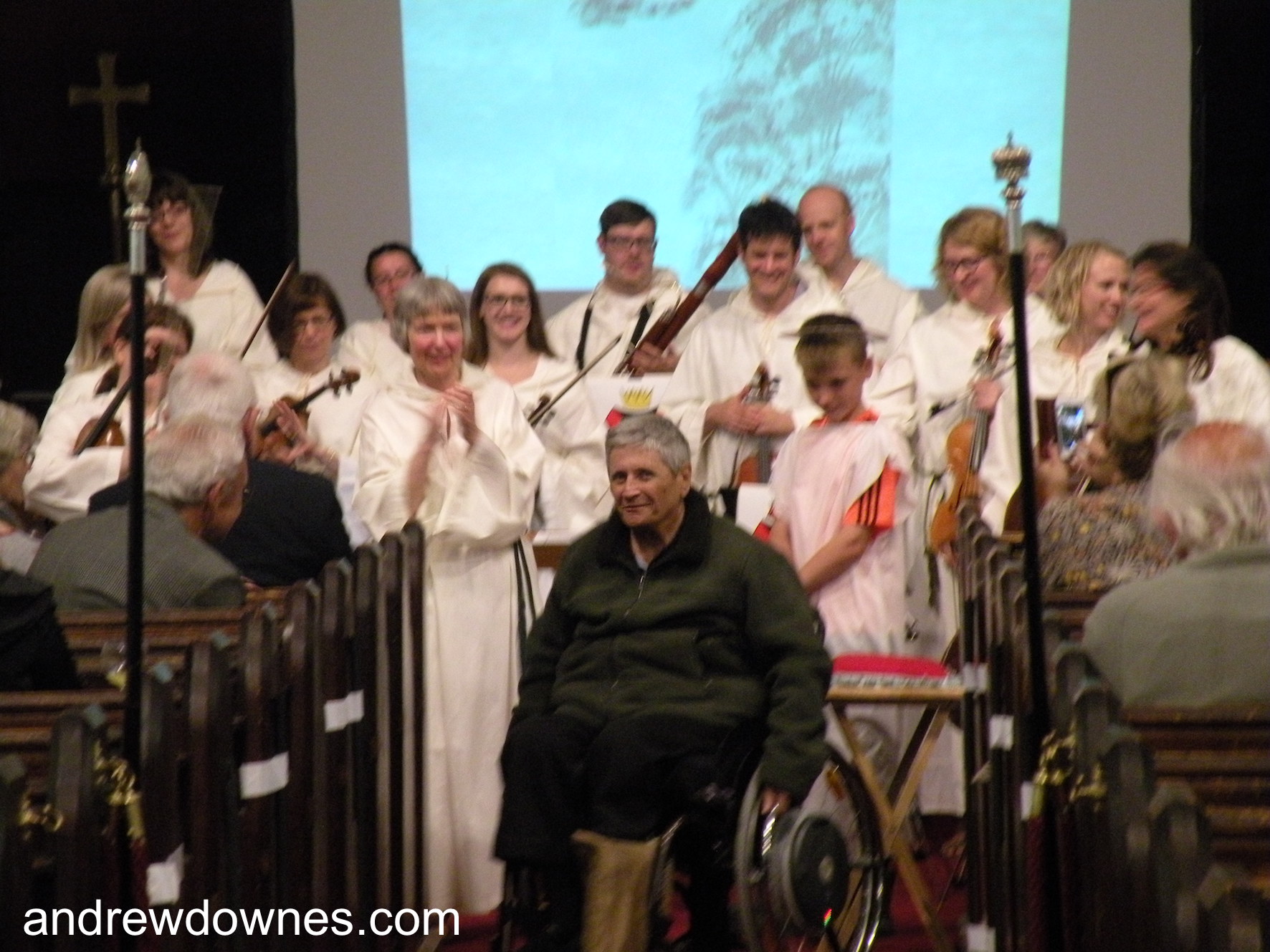 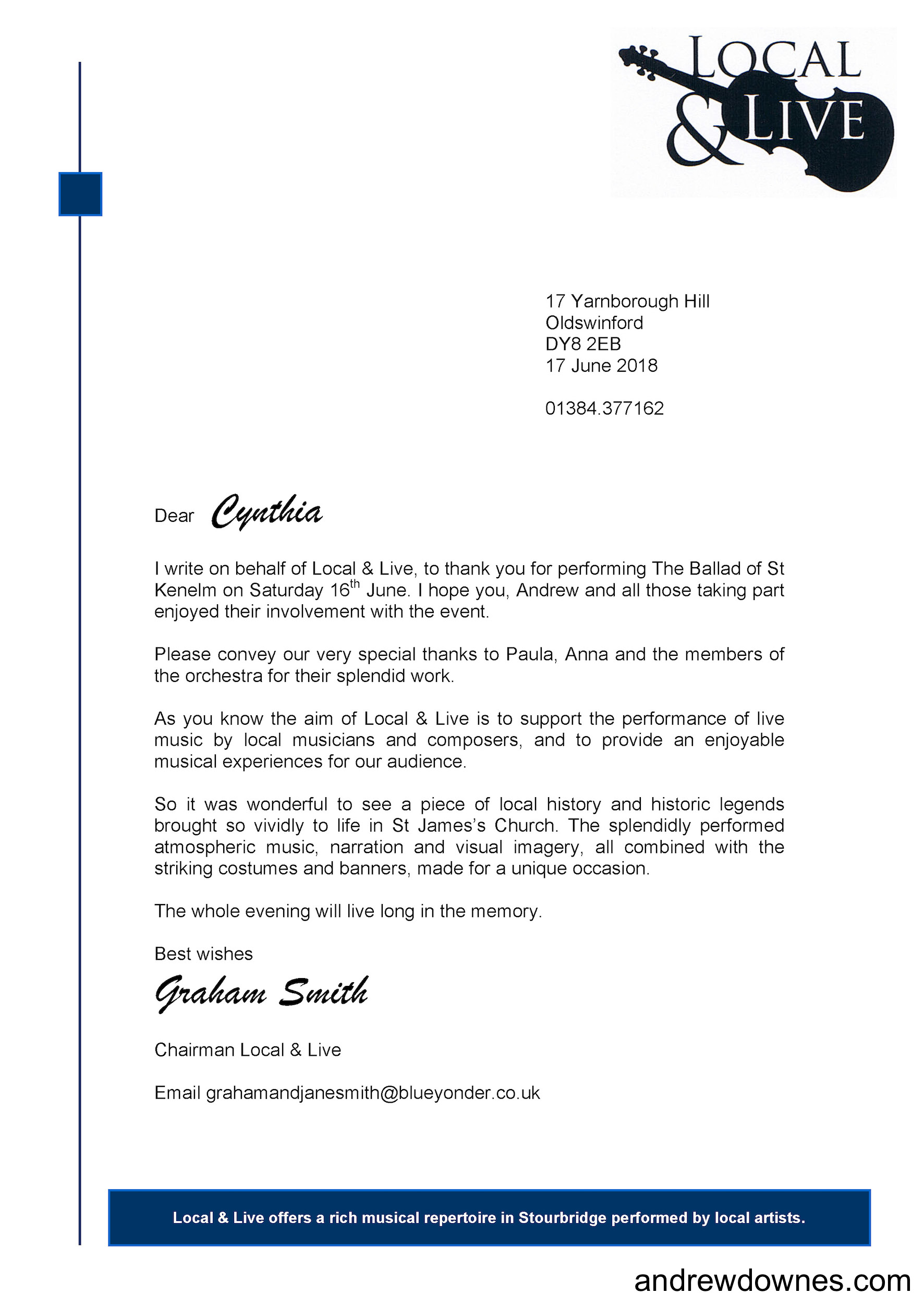 Andrew Downes
This is a superb, deeply felt account which brings back to life the whole immensely varied experience of the commission and putting on of The Ballad of …