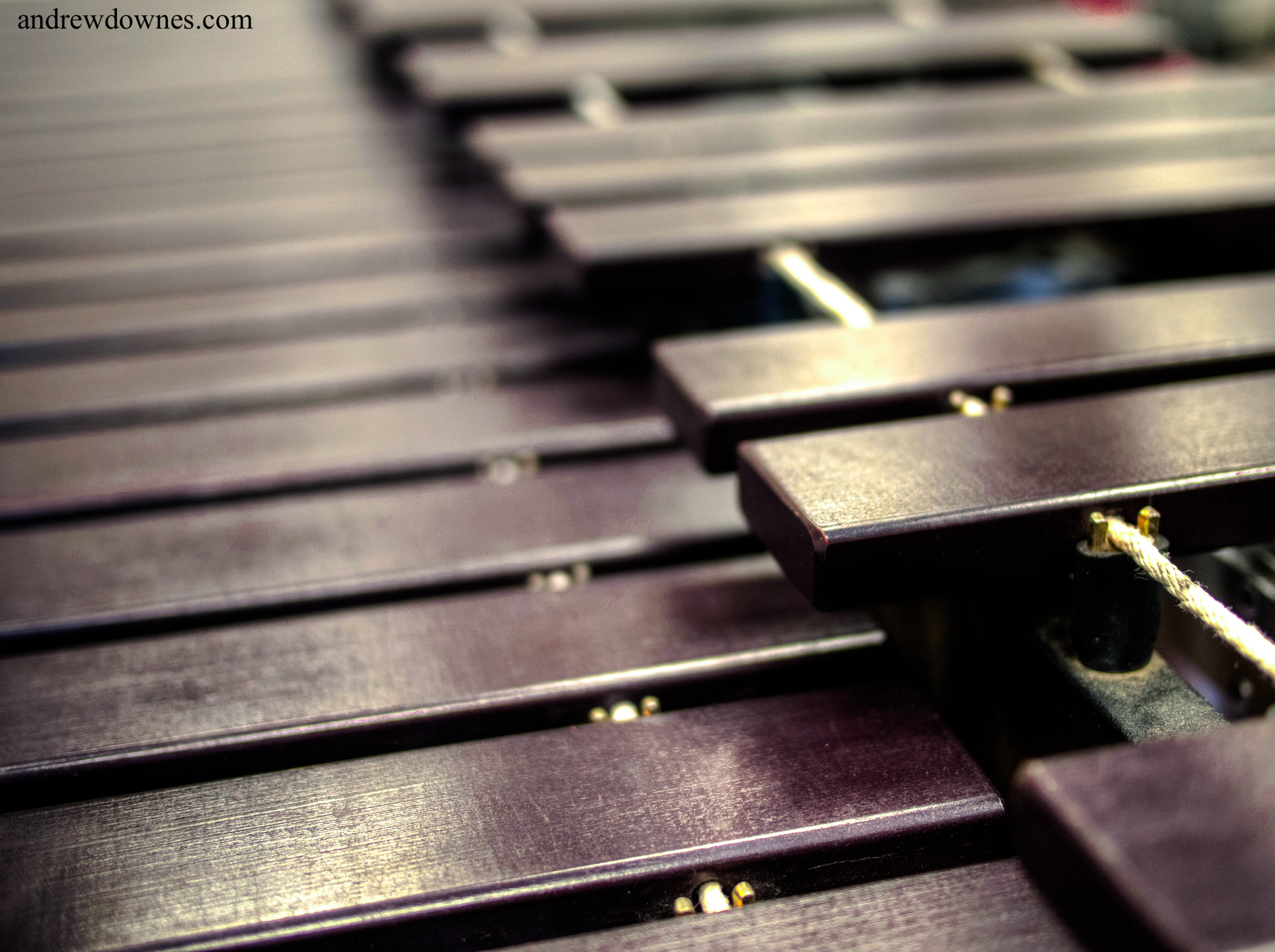 An account by Andrew's wife and publisher, Cynthia Downes, posted on December 16th, 2021

This has to be one of my all-time favourite works by Andrew.  He had just set up and become Head of the School of Composition and Creative Studies at Birmingham Conservatoire (now Royal Birmingham Conservatoire) and, amongst many other innovations at the Conservatoire, he had introduced World Music into the school.  All the different musics around the world had always fired him up, and they came to a climax in this work.

The first movement immediately sets an African scene.  Predominantly with the use of three marimbas, he conjures up the heat of an African landscape.  The movement has a lot of pop music influence too.  He uses a drum kit here.

The subtitle of the Symphony is "Spirits of the Earth".  They come to the fore in movement 4, Belas Knapp.  This movement traces a climb up to this long barrow in the Cotswolds (well known to us both).

The Symphony abounds with wonderful melodies, not least the gorgeous viola solo near the end, which sums up Andrew’s feelings of concern at the destruction of so many aspects of nature, habitats and customs around the world.

If Andrew is asked for a programme note for a work, he always asks me.  He doesn’t feel he can analyse his own music and he likes the way I describe his pieces in layman’s terms.  This is the programme note which I wrote for the Symphony:

‘This Symphony is characterised by its exciting rhythms, counter-rhythms and musical influences from all cultures: ‘pop’ (there is a drum kit part in the first movement), jazz, big band styles (in movement 1 the trumpet players are asked to stand up as if in a dance band), through to plainsong and organum, which merge with African and Native American styles.  There is occasionally a marimba sound in the background, giving the atmosphere of a broad African savanna, punctuated by many other percussion sounds, bringing the scene to life.

‘The work is designed to excite both the ear and the eye.  There is constant movement, creating a feeling of dance, freedom of expression and rhythm.  In between frenzied and busy passages come beautiful and melodic moments.

The second movement begins with a slow, reflective African folk-like theme on flutes, which features throughout the movement.

The fourth movement, entitled Belas Knap, because the music is inspired by the beautiful climb up to this long barrow in the Cotswolds, has broad lines full of elation and freedom, inspiring thoughts of the generations which have trodden this path since ancient times.

The work attempts to create a oneness: of the past with the future, of the different cultures of the earth, and of man with nature.  There is a feeling of old spirits coming alive (especially in movement 4), and there are sounds throughout which suggest creatures in the woods and jungles of the world.  There are suggestions in the multi-time passages of different time zones and dimensions all existing together.

‘Movements 1, 3 and 5 begin with great energy, and movements 2 and 4 calmly, but there are contrasting sections in all movements, and themes recur from one movement to the next.  The work draws to a close with a viola solo which is both rhythmic and profound, and which comes towards the end of a beautiful chorale.  This chorale returns from earlier in the last movement, and represents, in fact, the main theme of the whole work: a heartfelt expression of hope that we can all live together in harmony.’


Symphony No 3 was first performed by the Birmingham Conservatoire Symphony Orchestra conducted by Andrew Mogrelia on 1st April 1993, in a concert in aid of the NSPCC, in the Adrian Boult Hall, Birmingham.  The work is dedicated to the NSPCC. 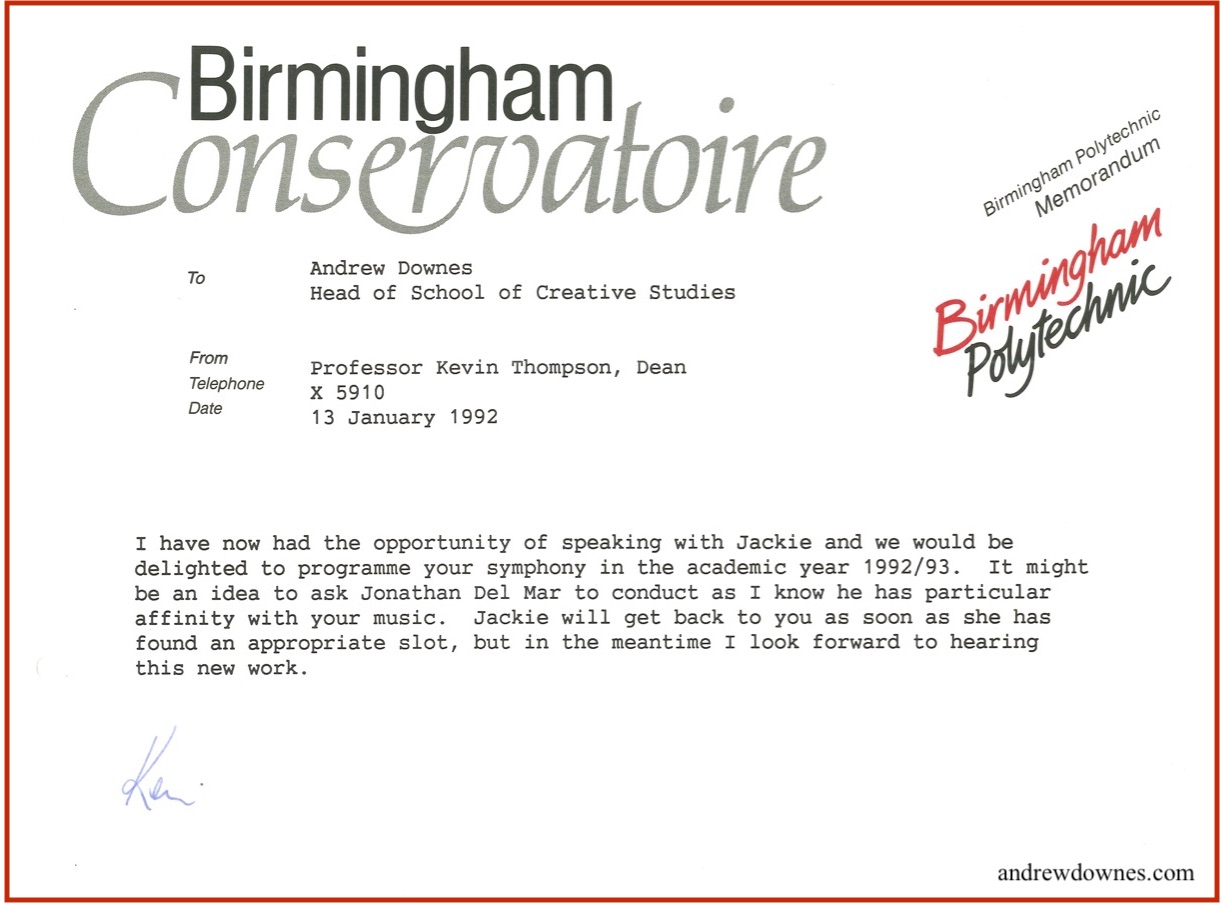 Composers' Guild booklet of First Performances by British Composers for 1993: 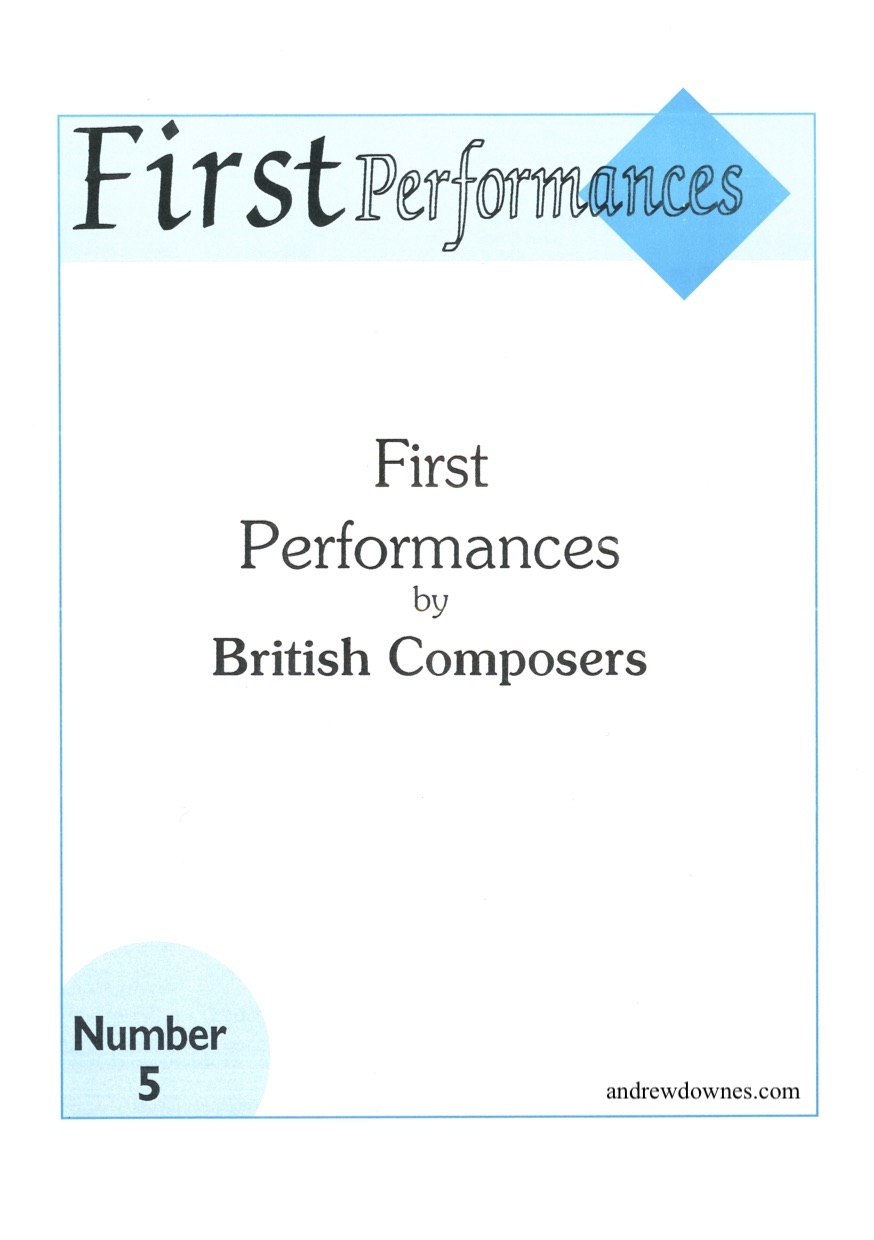 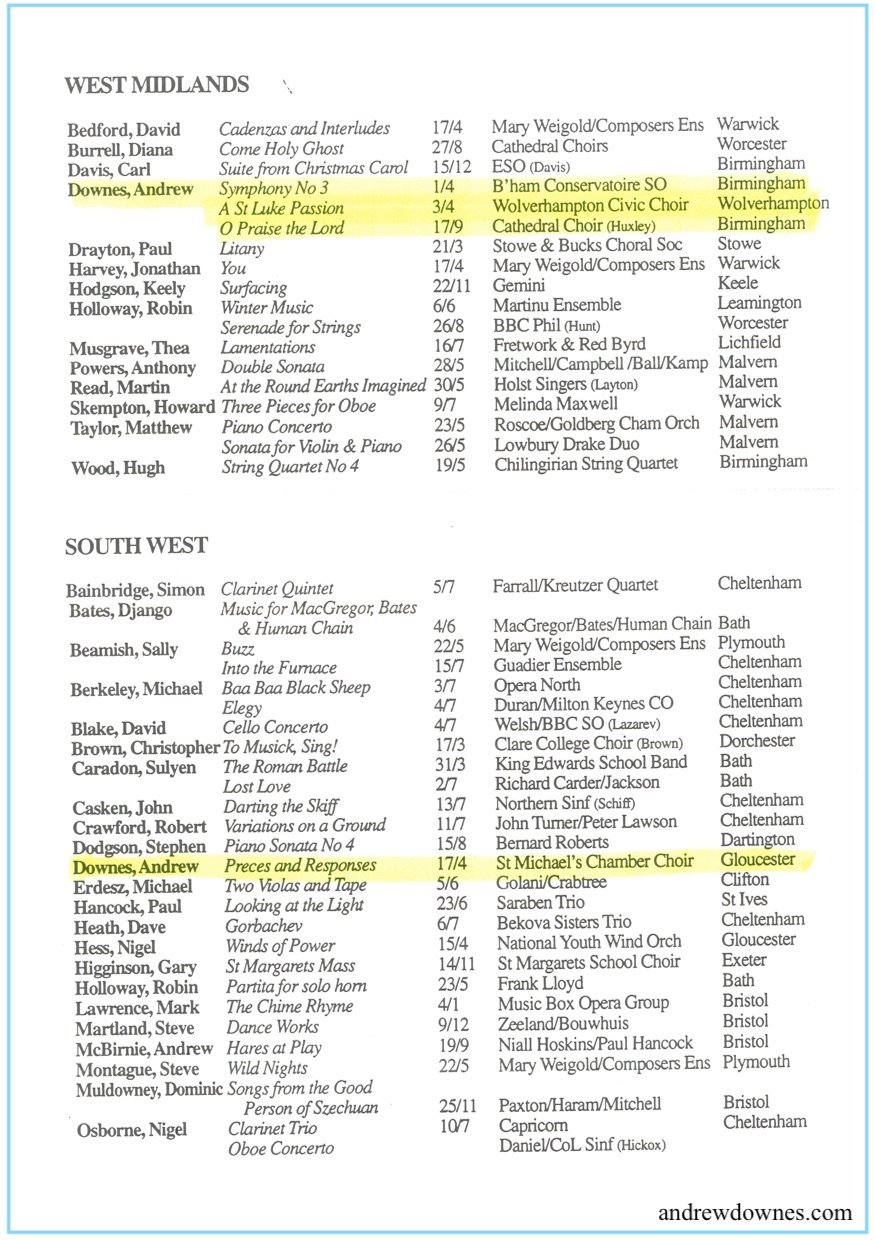 Andrew and I had heard Andrew Mogrelia conduct Symphony No 2 in Warwick shortly before, and were very impressed.  Andrew asked Mogrelia to conduct the premiere of Symphony No 3 as a result.  Mogrelia readily agreed, but wasn’t too pleased at having to conduct the multi-time passages (composed by Andrew to convey the cultural diversity around the world). 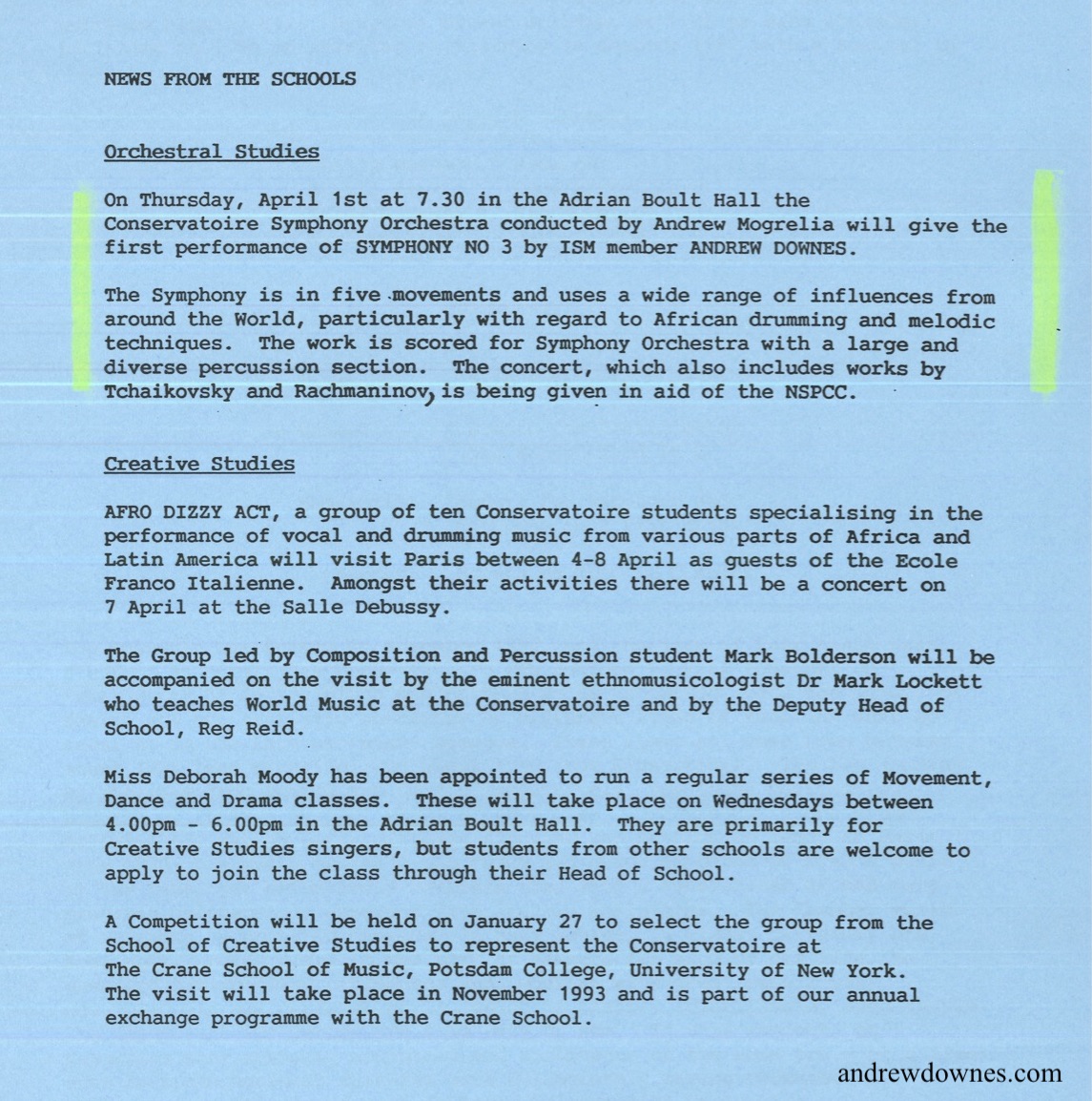 Advertising in the Hagley Village News: 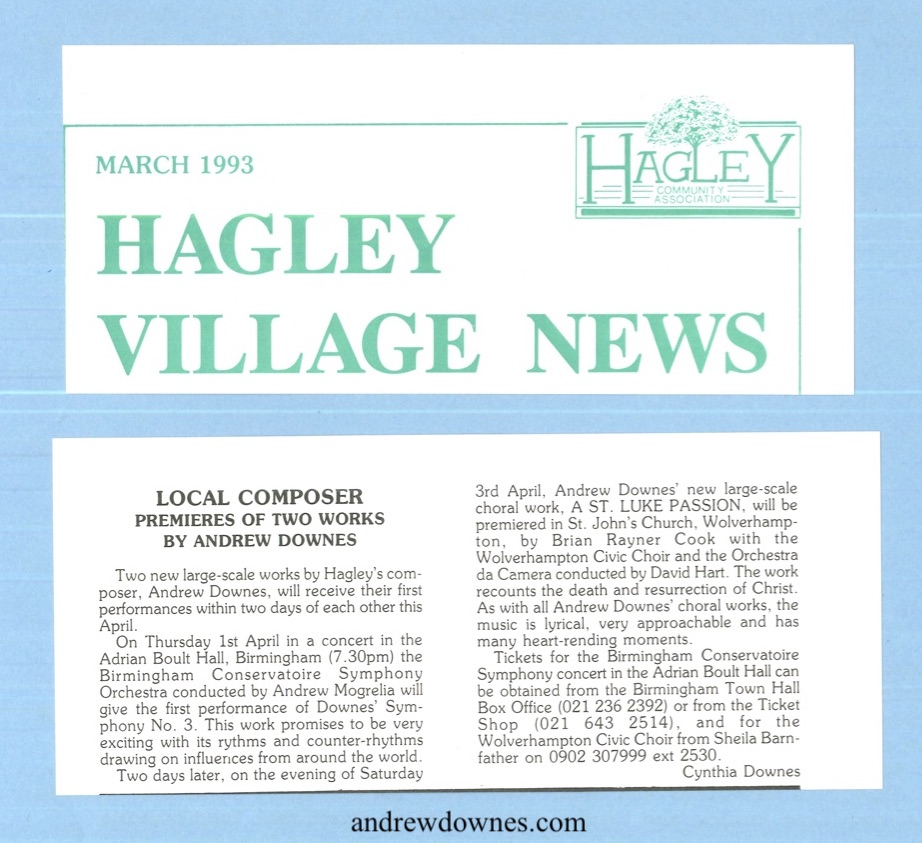 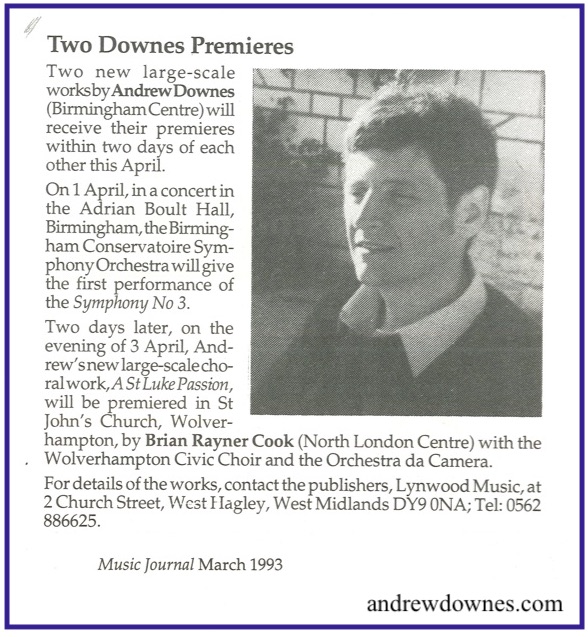 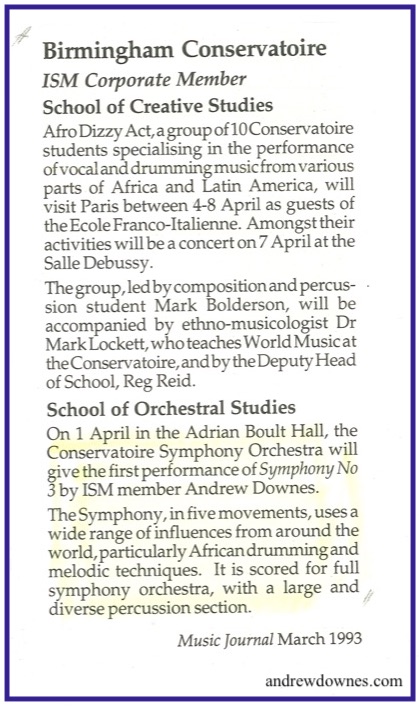 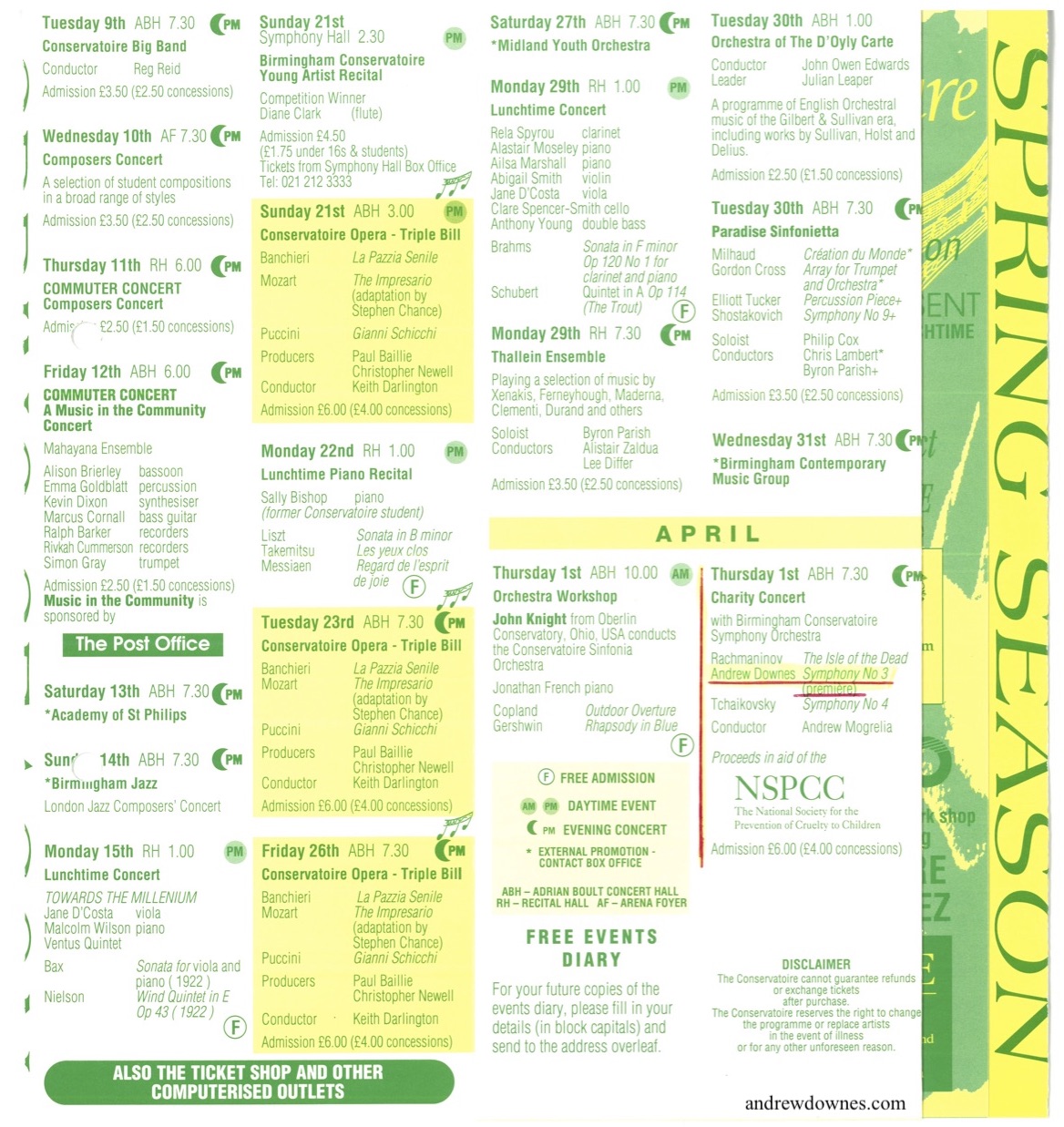 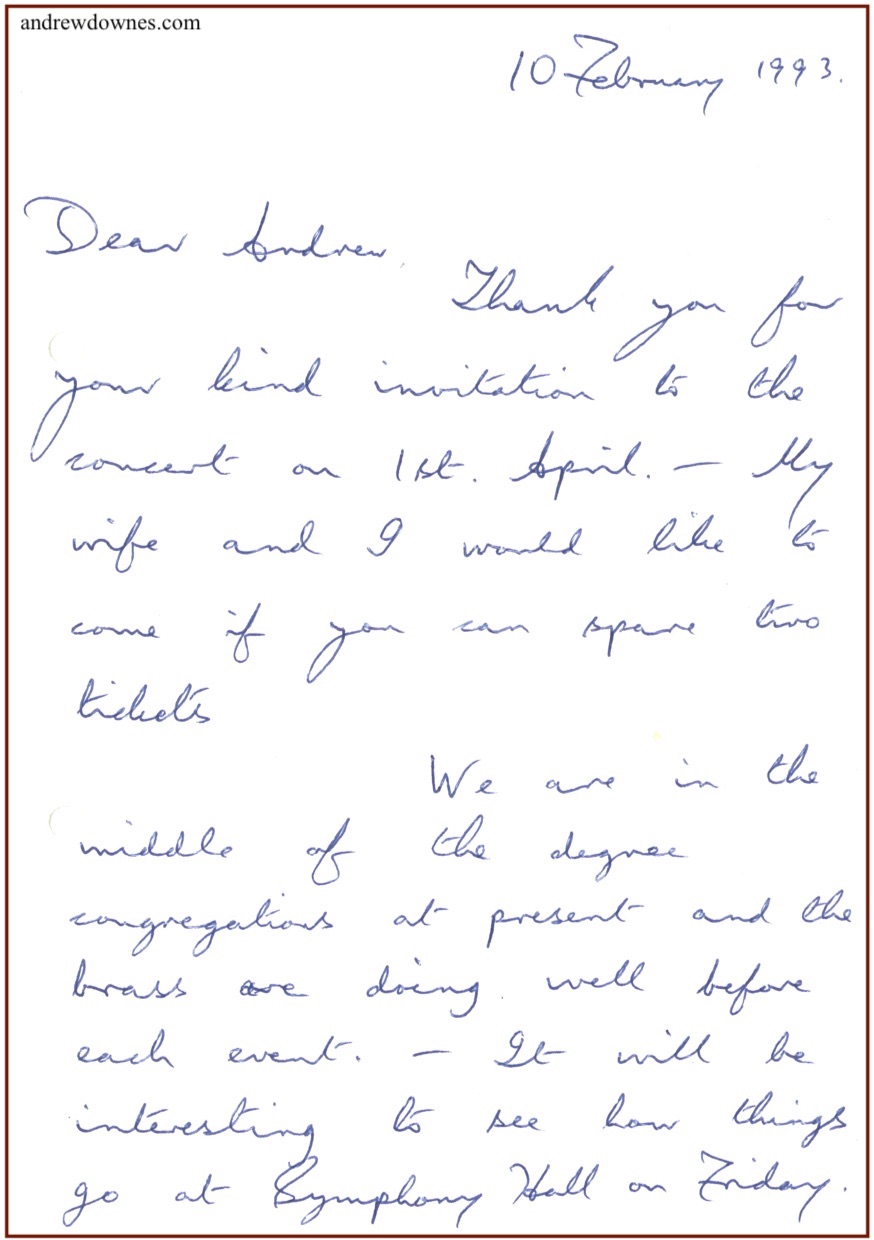 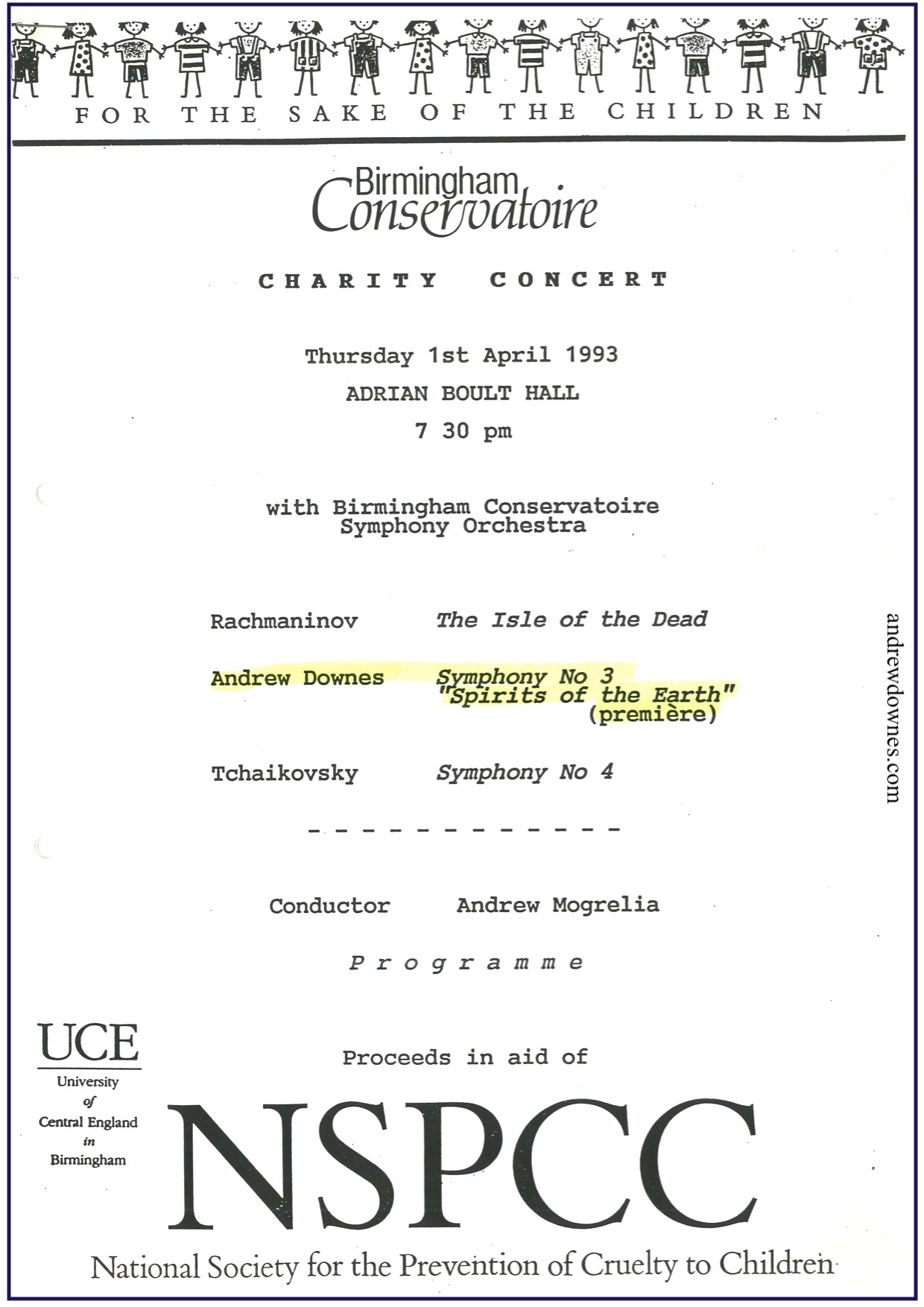 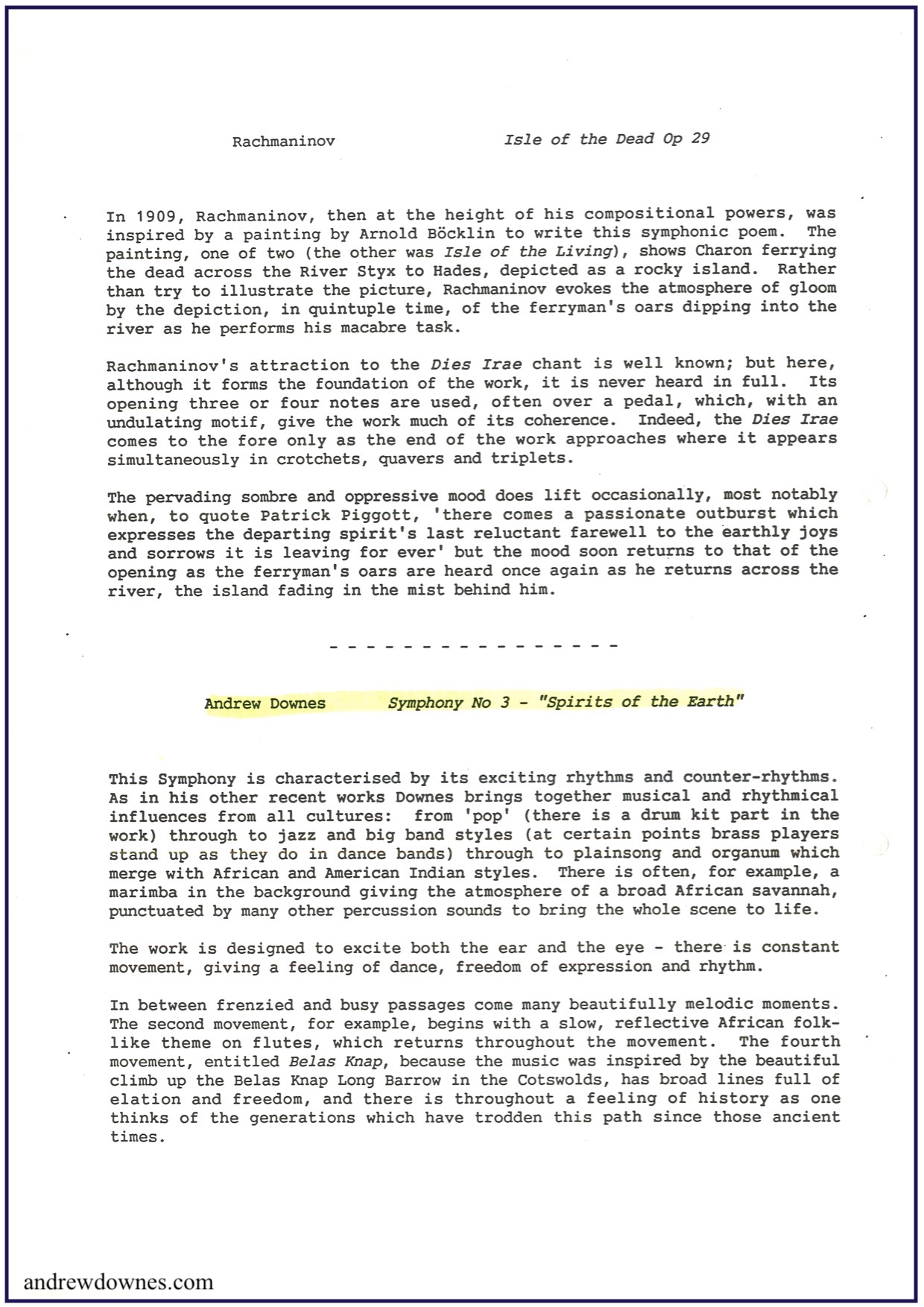 'Two triumphant premieres in three days! After Thursday's success of his eloquent Third Symphony, Andrew Downes heard his deeply affecting St Luke Passion given on Saturday... 'Spirits of the Earth, his third Symphony, is probably the most demanding work Andrew Downes has yet written. "It assumes virtuosity from its players, a finely honed sense of collective ensemble, and the capacity for various sections of the orchestra to play in several independent tempi.

'As the substantial five movement work moves towards its close these disparate elements come together in final reconciliation. 'The premiere it received last night from the Conservatoire Symphony Orchestra was nothing short of astonishing. Very few inaccuracies marred this virile, sensitive performance...' THE BIRMINGHAM POST 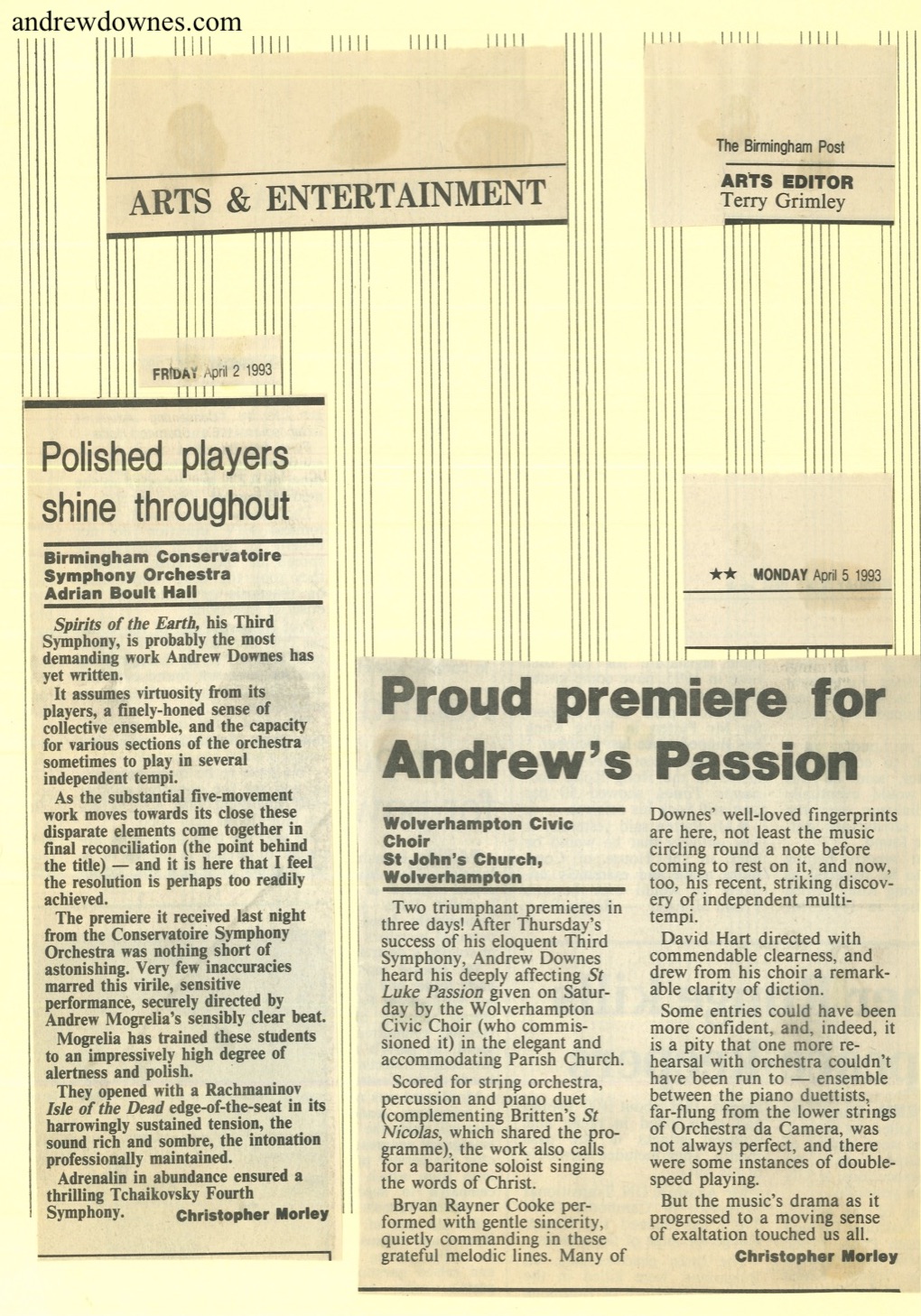 Correspondence between Andrew and the NSPCC with regards to dedicating the work to them: 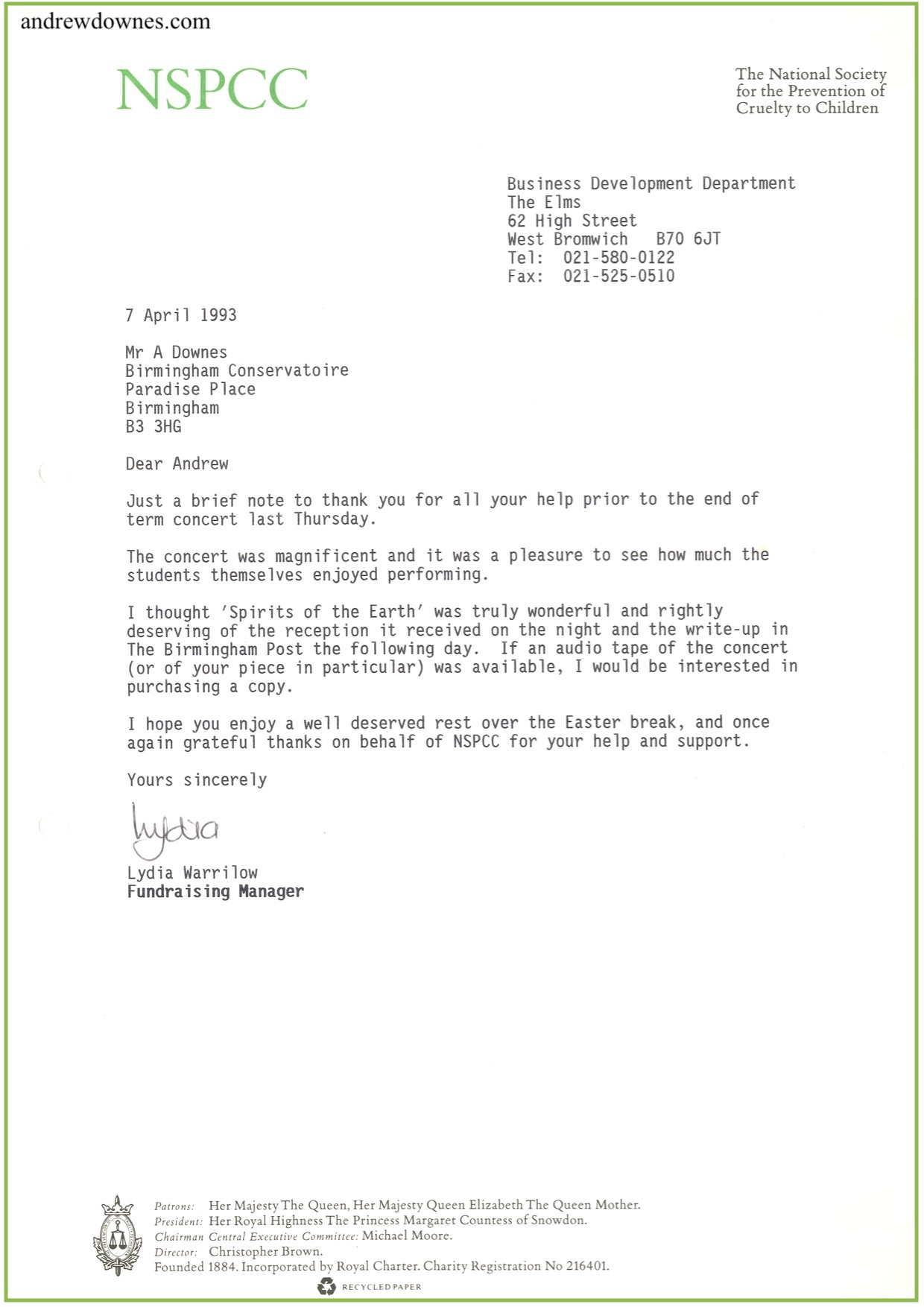 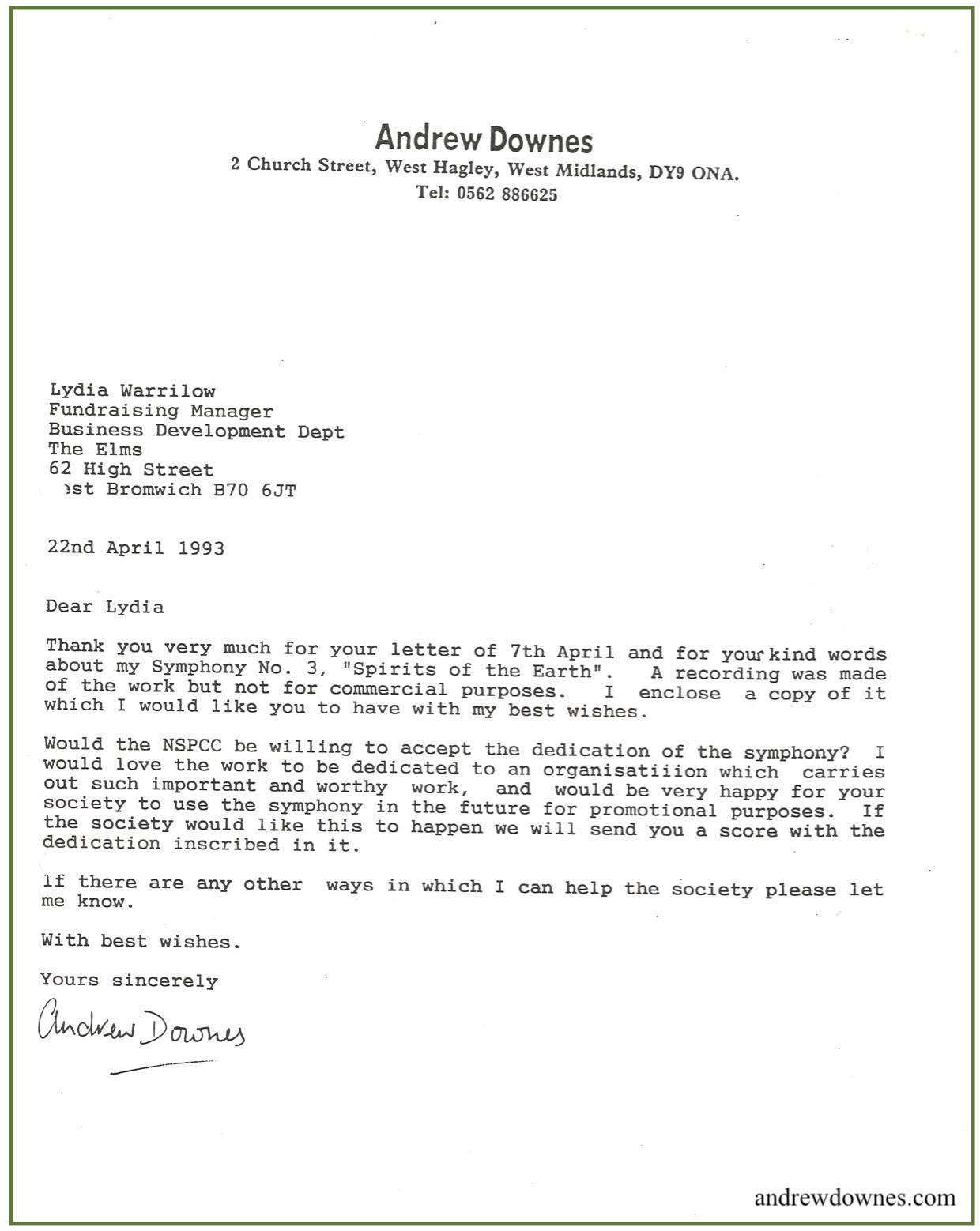 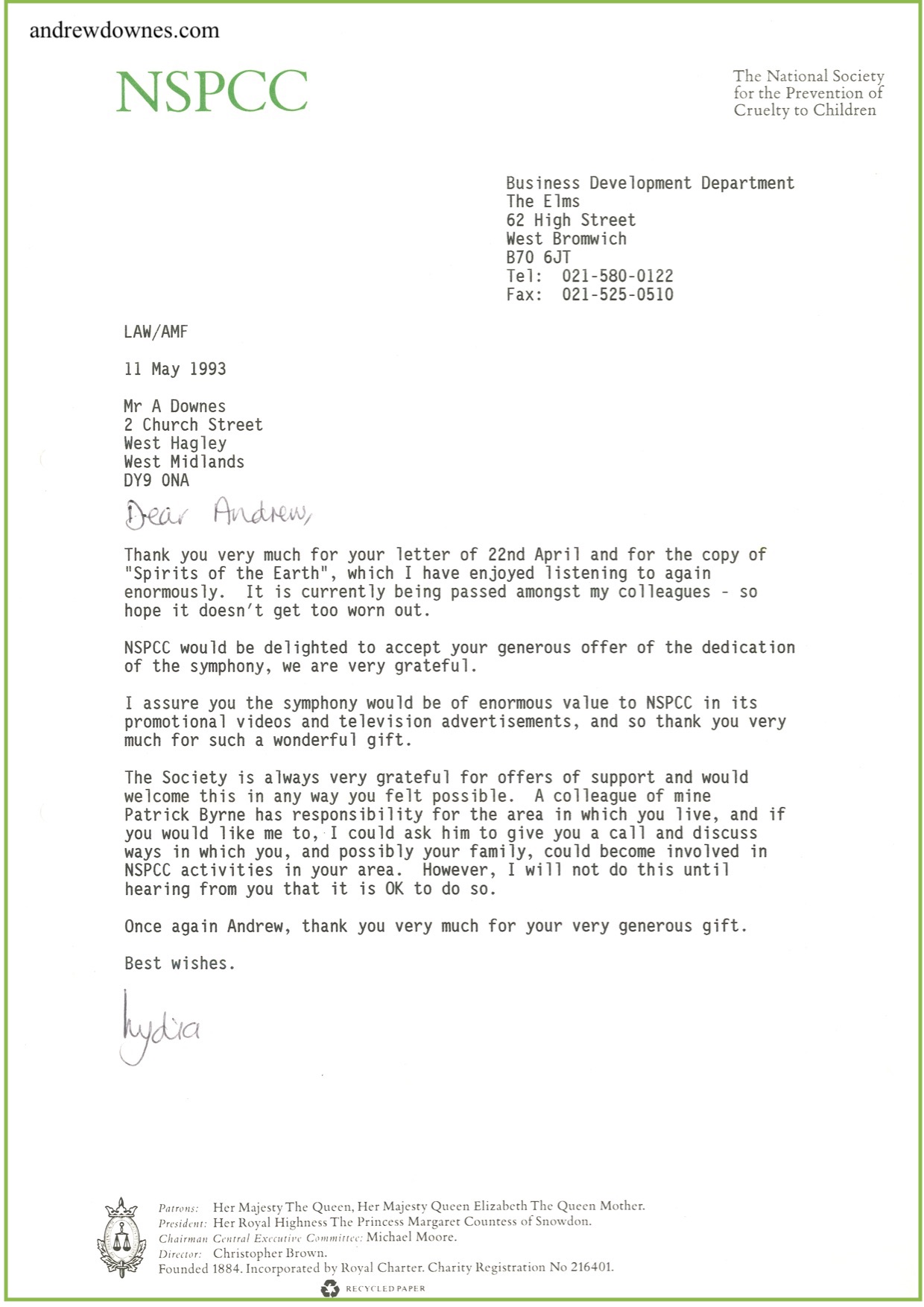 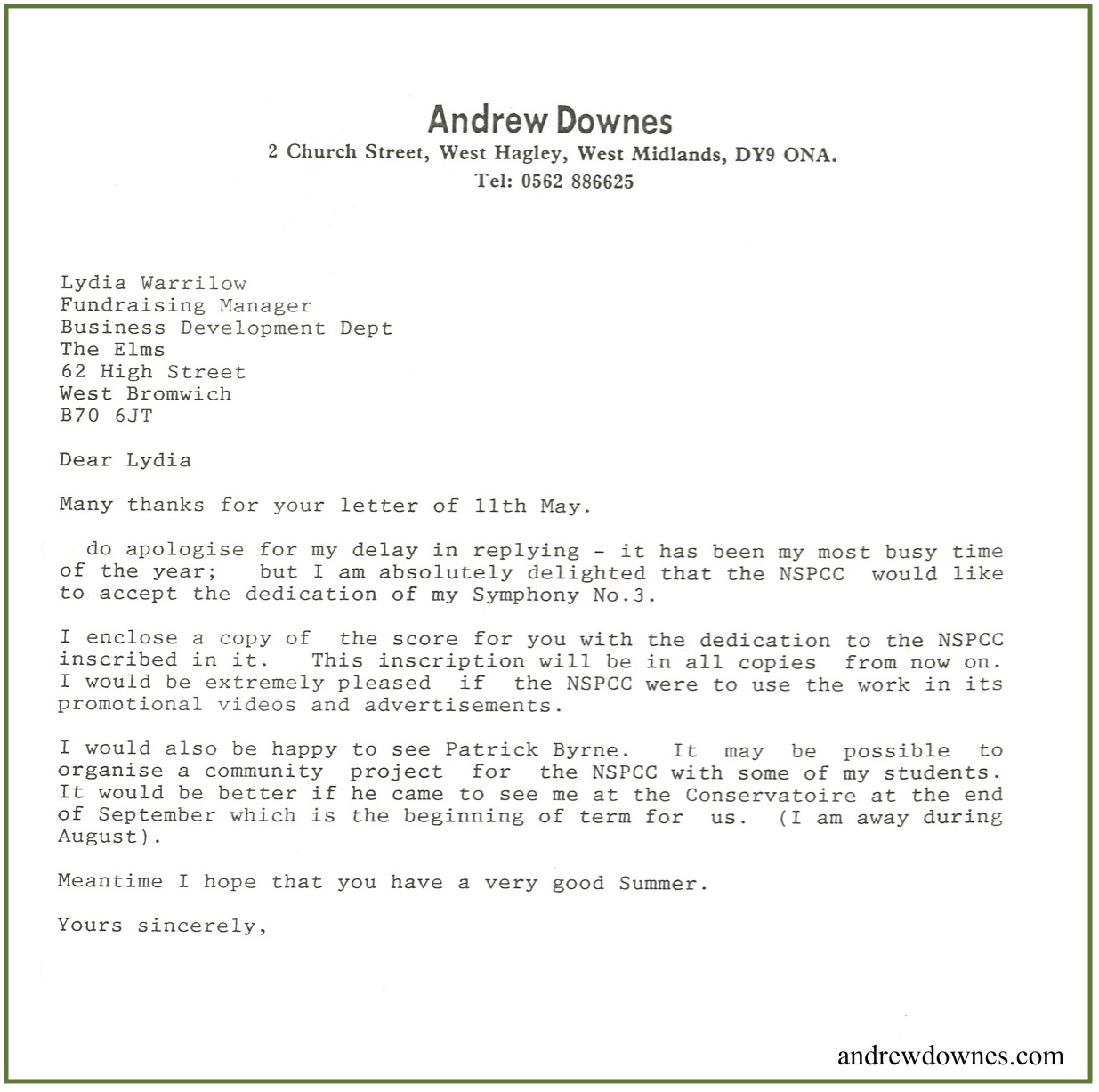 In 2013 Andrew received a large sum of money by way of compensation for the clinical negligence he had suffered in 2009 at Russells Hall Hospital, where doctors failed to recognise over many hours that he had broken his back, leaving him paralysed.  When the compensation came, I suggested to Andrew that we should use some of it to hire the services of the Czech Philharmonic Orchestra to record Andrew’s Symphonies 1-4 and two of his Overtures.  At the time Ondrej Vrabec, Principal Horn of the Orchestra and great friend of Andrew’s, had become Associate Conductor of the Orchestra.  He was delighted to be asked to conduct Andrew’s works and booked the best recording engineer and producer, as well as the best extra players required.

So, in February 2015 this Symphony was recorded in the Dvorak Hall of the Rudolfinum, Prague, Czech Republic, by the Czech Philharmonic Orchestra, directed by Ondrej Vrabec, as part of a 2 CDs set of 4 symphonies and 2 overtures by Andrew Downes, all recorded in the spring of 2015 on the Artesmon label.  We weren’t able to go to the recording because of Andrew’s paraplegia, but the engineers in Prague and our computer repair man here set up streaming and skype for us to watch the recording and make comments.  The set of 2 CDs and one Documentary DVD were launched in the Suk Hall of the Rudolfinum, Prague, on 1st December 2015.  The CDs were launched on iTunes on March 18th 2016 and voted CD of the Month of March 2016 by Czech Music Direct. 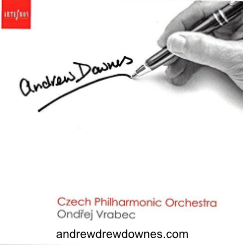 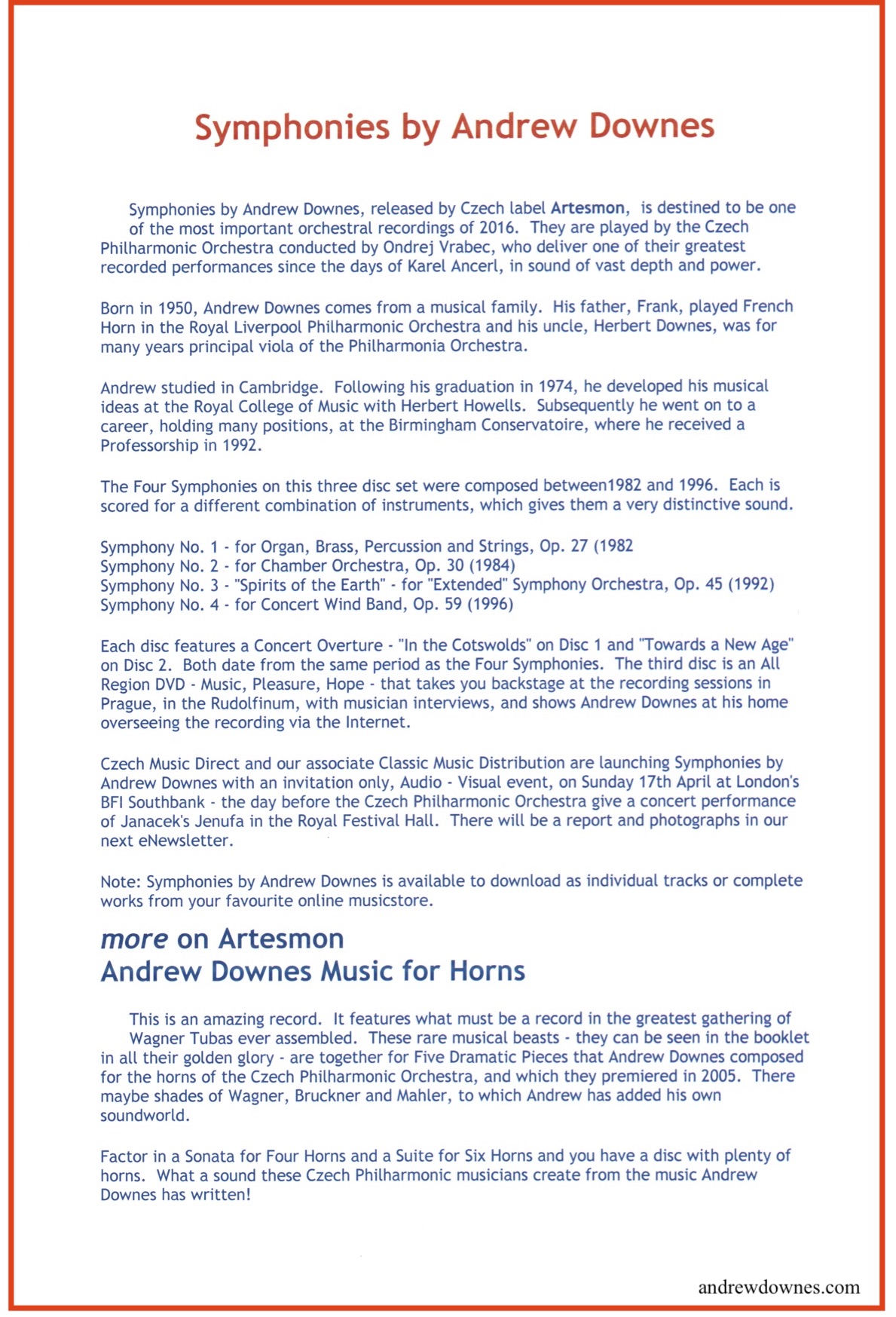 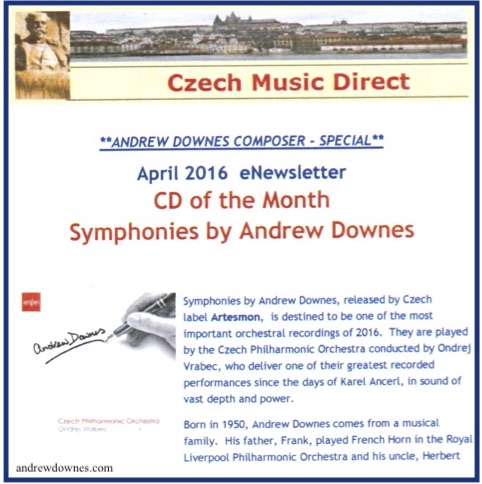 An advert in the Southbank Centre Concert Programme: 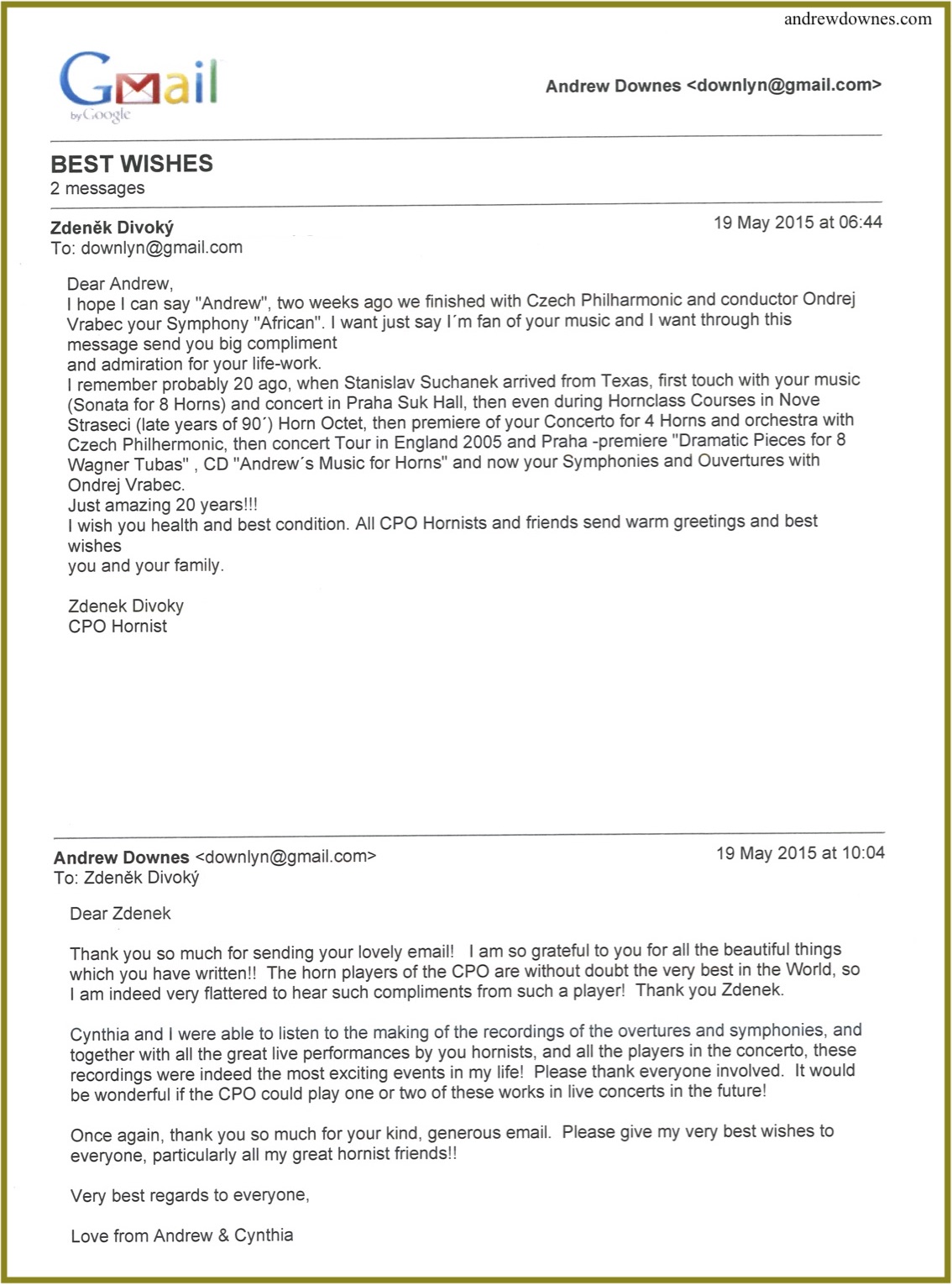 The UK launch, organised by Laurence Lewis of Czech Music Direct, took place on 17th April 2016 at the National Film Theatre, London, where excerpts were played and the Documentary DVD was shown, together with Paula’s films portraying Andrews' Songs from Spoon River and also an excerpt from the DVD of Andrew's opera, Far from the Madding Crowd.  Paula and her husband David Trippett were interviewed by Laurence Lewis about the songs, which David had accompanied, and the opera, which David had conducted and in which Paula sang the part of Bathsheba.  Anna also gave a talk about the up-coming Andrew Downes 65th Birthday concert which she was organising in Birmingham Cathedral, featuring Symphony no 1.  It was a thrilling day for us all and a great success!

Invitation to the UK launch: 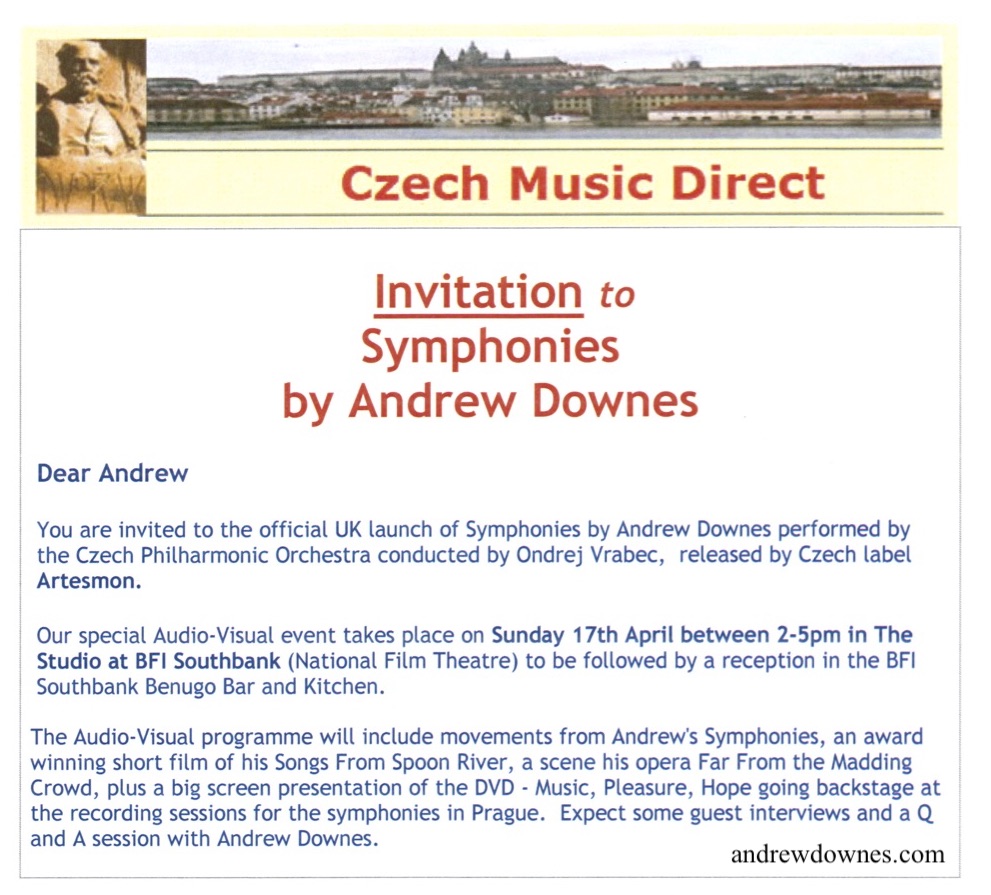 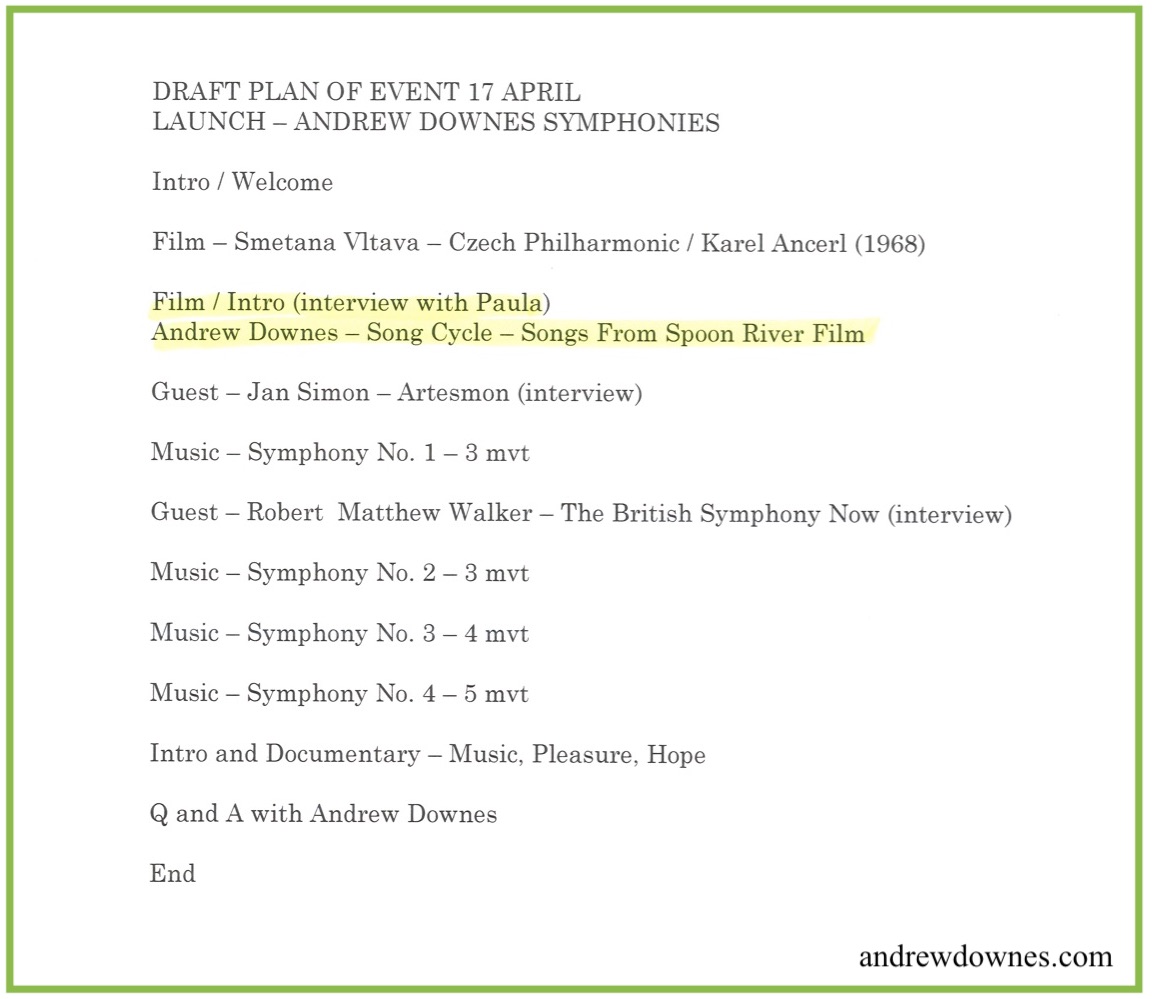 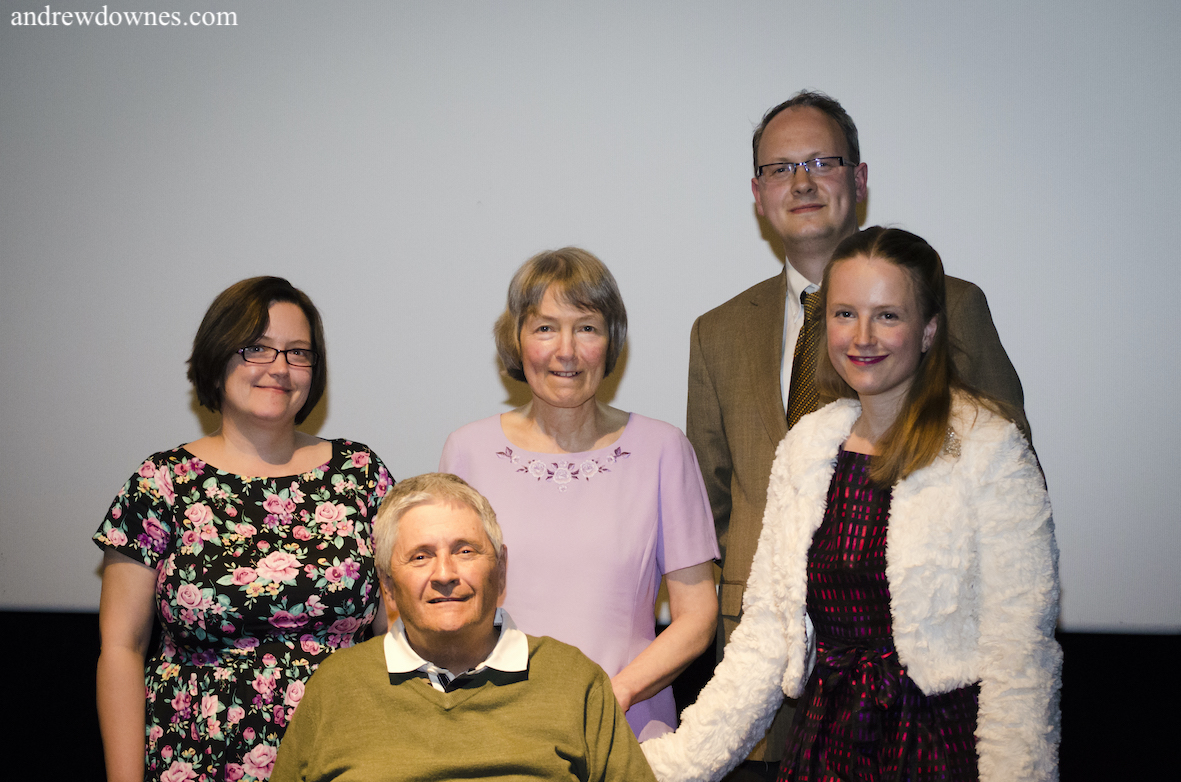 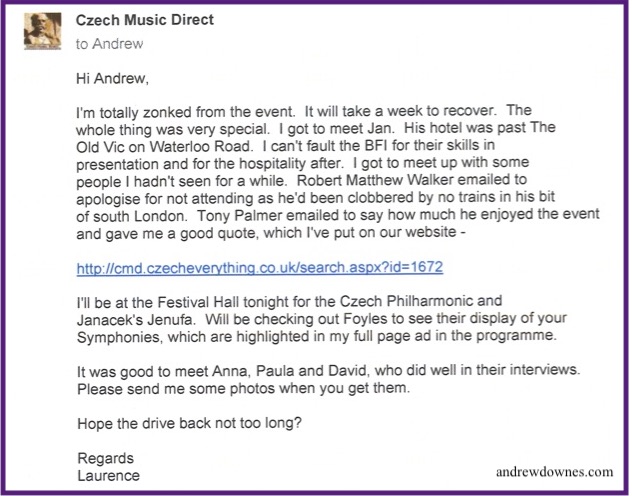 Write-up of the UK launch by Czech Music Direct: 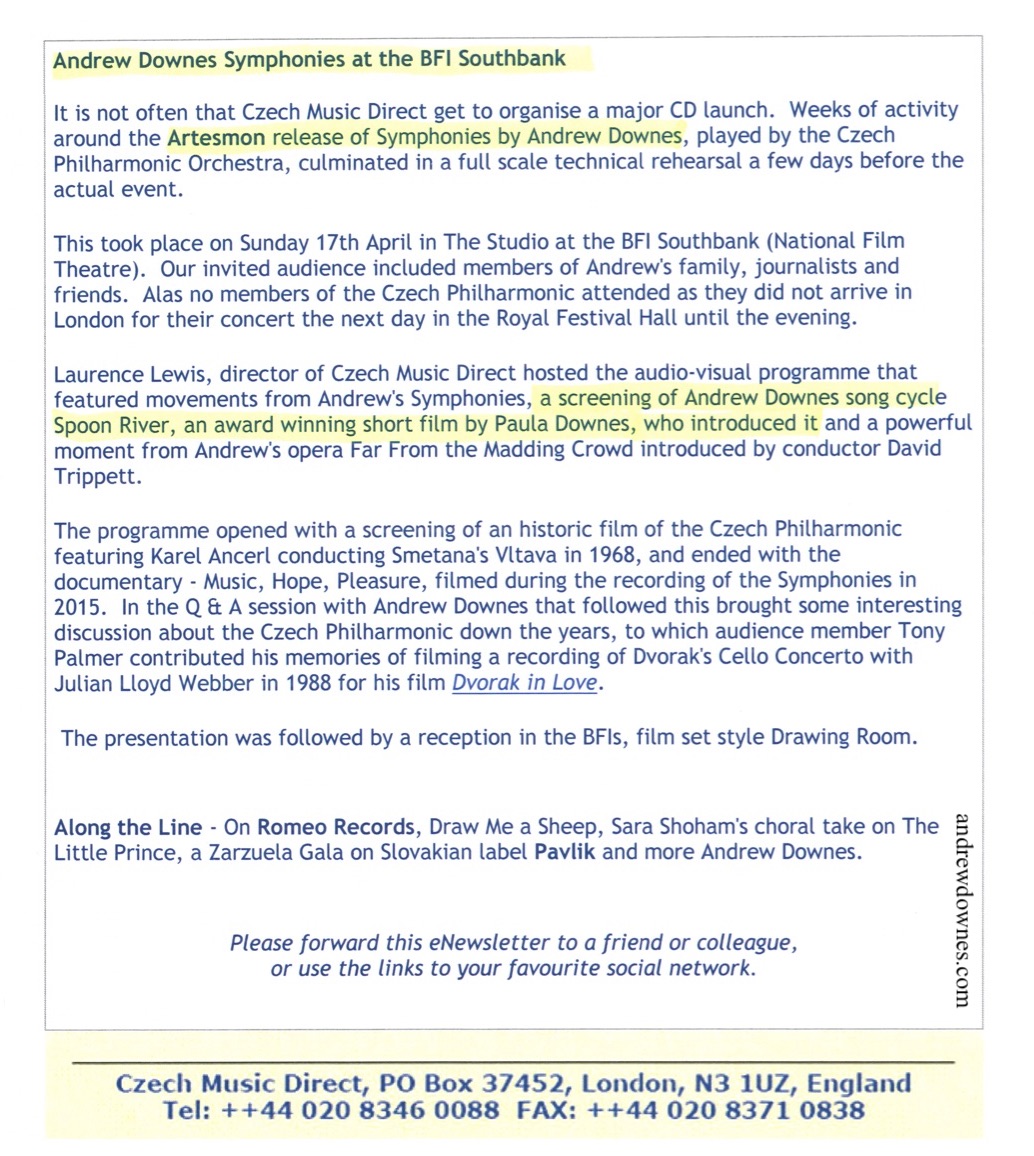 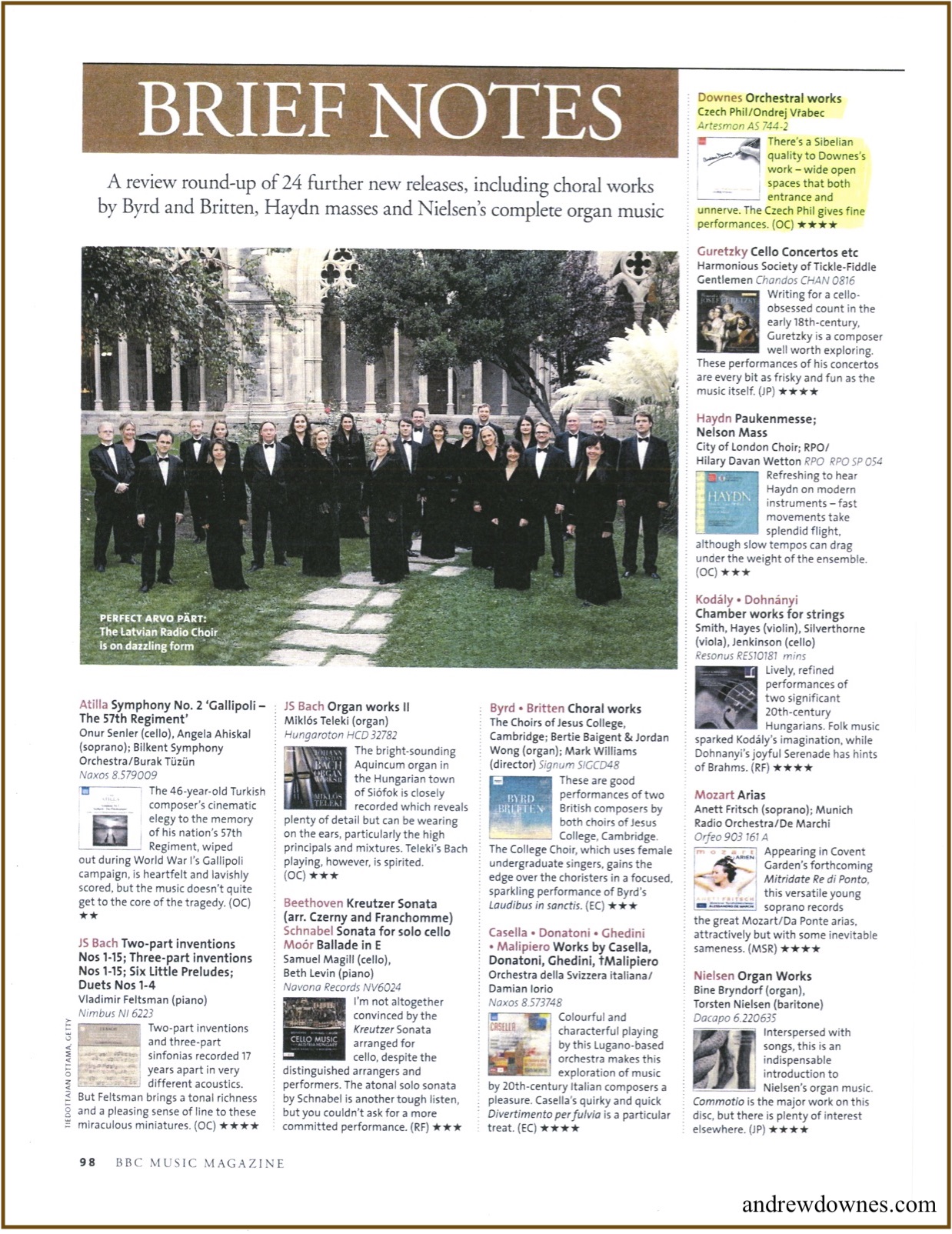 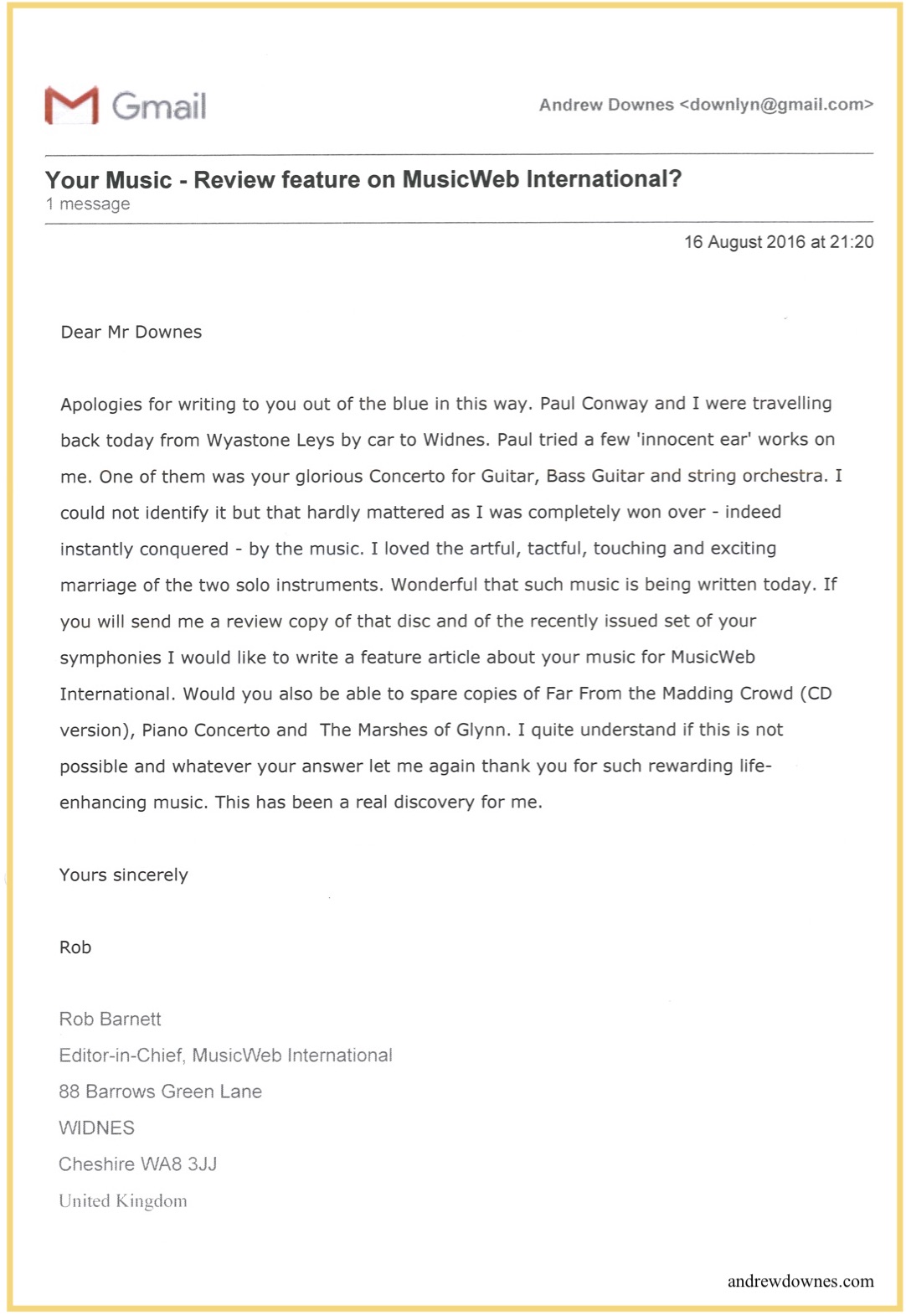 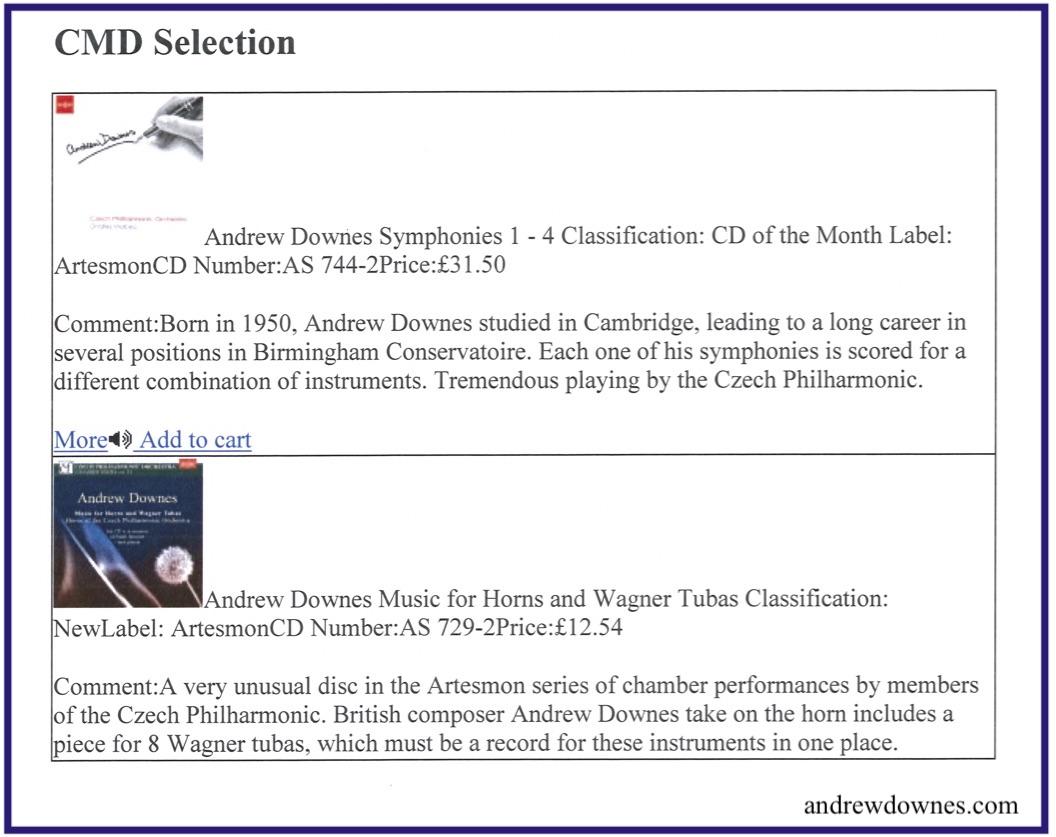 'Symphonies (and Overtures) by Andrew Downes, released by Czech label Artesmon, is destined to be one of the most important orchestral recordings of 2016.  They are played by the Czech Philharmonic Orchestra conducted by Ondrej Vrabec, who deliver one of their greatest recorded performances since the days of Karel Ancerl, in sound of vast depth and power.'  CZECH MUSIC DIRECT  '

'I've started to listen to the recordings, which are fabulous.' Tony Palmer, film director and author

'Downes is clearly not at all afraid of the big statement – the First Symphony is inspired (if that is the right word) by the subject of nuclear war – and there is much here that has an immediate impact in terms of memorable thematic material, idiomatic orchestration and subtle use of harmony... the contrasts between the various sections of the scores are often arresting.

'Some of the orchestral players are heard remarking on how much they enjoyed playing the scores, and their enthusiasm is infectious; there is no sense here of bored instrumentalists going dutifully through the motions. There is also a startlingly interventionist producer, who seems to be acting as a persistent critic dedicated to the detection of the slightest error or pitch or rhythm.

'...earnestly recommended to those listeners who are willing to make the acquaintance of an attractive composer who is prepared to meet them halfway. This is a thoroughly worthwhile release; and the presentation, with three discs in a gatefold sleeve including a substantial booklet of forty pages (English with Czech translation), is a model of what such things should be.' MUSICWEB INTERNATIONAL

"a real find", "rarely can comtemporary music deserve more exposure than these colourful characterful pieces", "uses percussion and seductive Arnoldian tunes in the most beguiling of fashions", "these discs will persuade the receptive listener that Downes has a truly individual voice", "a solid addition to the canon of such works":  cdchoice.co.uk

During Andrew Downes 70th birthday year, Movement 3 from the CPO recording of the symphony was shared online, in March 2020. Here are 2 snippets:

The opening of the work:

The viola solo at the end: