The Premieres and Subsequent Performances of String Quartets 1, 2 & 3 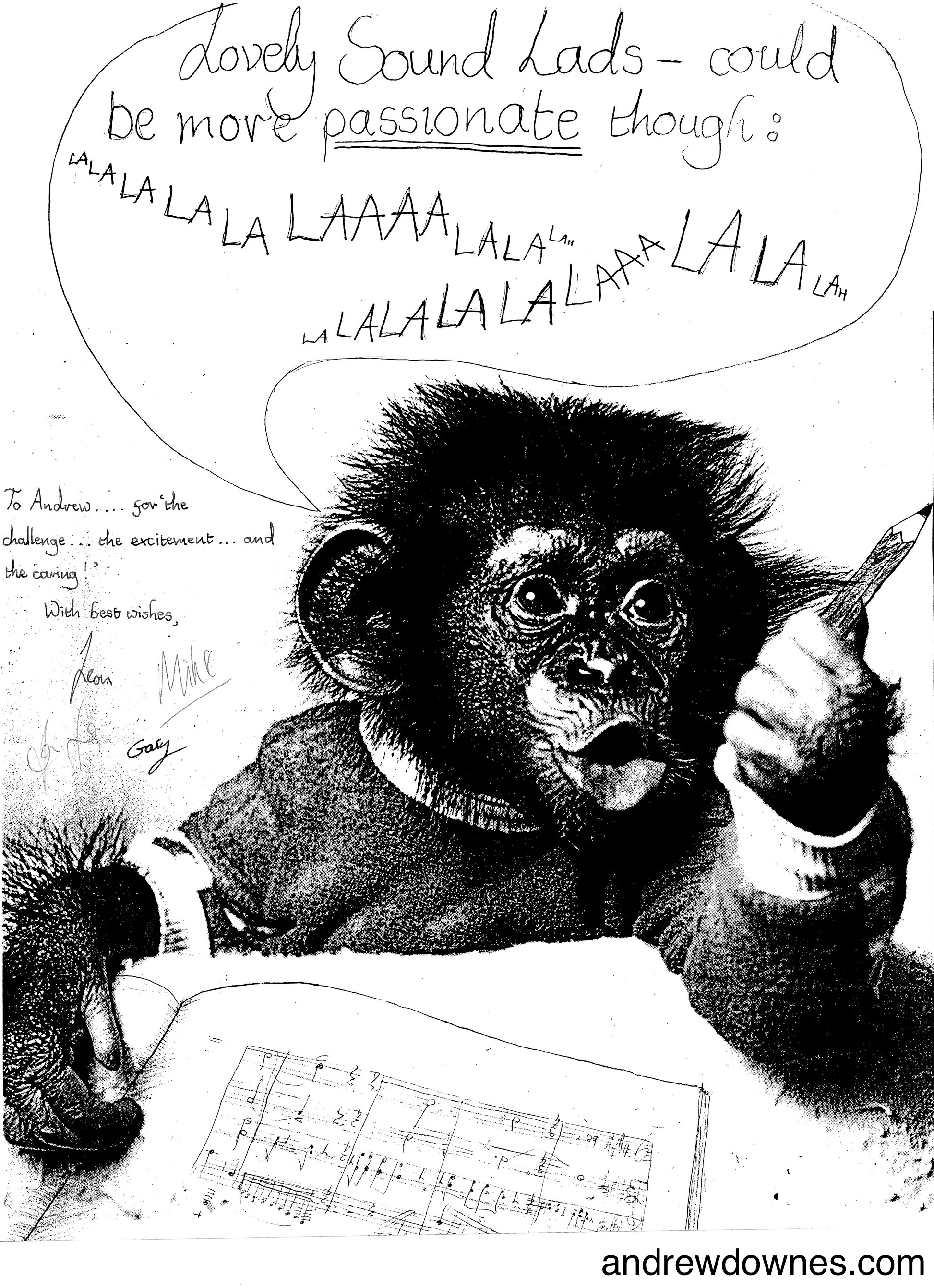 An account by his wife and publisher, Cynthia Downes, posted on March 1st, 2018

One of the first pieces I published under Lynwood Music was Andrew's String Quartet No.1.  In those days our photocopier paper was on a roll and our ink in a bottle!  I created Andrew's first brochure with this equipment too.  There were not too many compositions published by Lynwood Music at that time (the work was premiered in 1980), so they fitted on to 2 sides of an A4 sheet folded lengthwise.  I designed the title page on an old fashioned typewriter, writing Andrew's name in rows of crosses, like a tapestry.  As time went on, Andrew's list of works grew to fill an A3 sheet folded in concertina fashion.  Eventually the works filled a 30 page printed booklet, before we went on to the early days of the website.

The first performance of String Quartet No.1 was on May 15th 1980 in Blakedown Church, Worcestershire (We lived in Blakedown then).

At first some people didn't take this work seriously.  String quartet players in those days were indeed very serious.  There were a number of famous Quartets, whose concerts were extremely popular, but also highbrow.  Andrew entered this world with a light hearted, jazzy, dance-like piece.  Moreover he wrote the parts out in blue biro (no computers then) and his double stopping was difficult and hard to read.  Even the Perry student quartet, who premiered the work, treated it as a less important part of their programme of otherwise established works.  In those days only composers from past eras were respected.

The audience in Blakedown Church, however, seemed to like the jollity and jazz of Andrew's music.

When the Arioso quartet gave their first performance of String Quartet No.1 as part of their 1983 concert series at the Birmingham and Midland Institute, it went down very well with the concert goers.

String Quartet No.1, mini extracts from the 2nd and 3rd movements

As time went on I was able to typeset the work and redistribute the double stopping, to make it more 'string player friendly'.  Performances, both by string quartets and string orchestras, have continued to take place, with audiences nowadays really enjoying the music's groovy and humorous nature.

Numerous subsequent performances have taken place over the years, including one by the Belgrave String Quartet, who won the inaugural Andrew Downes Performance Prize at Birmingham Conservatoire in February 2014.  This excellent Quartet performed the work again in their prizewinners' recital in the Adrian Boult Hall, Birmingham, in December 2014.

The work has also been performed as a string orchestra piece by such ensembles as: the Hagley String Orchestra, in which Anna, Paula and I all played, directed by Joan Best (movement 1 in Hagley Community Centre, Worcestershire, in March 1992); Hagley Free Church Pupils' Orchestra, directed by me (movement 2, April 1997); 4 performances by the Mozart Orchestra, directed by Gordon Heard (movement 3, which they entitled Scherzo, in Stratford-upon-Avon Civic Hall in December 1996 and December 1998, in the Countess of Huntingdon Hall, Worcester, in December 1996, and in Walsall Town Hall in October 1998); and Volante Strings, led by Angela Richey (movement 2, in September 2006, in St Peter's Church, Martley, Worcestershire, and the whole work in August 2007 in St Helen's Church, Worcester, as part of the Worcester Music Festival).  Volante Strings performed movements 2 and 3 of the work on their tour of Corfu during Autumn 2006.  The Oldswinford Hospital School String Orchestra, directed by our daughter Anna, performed the second movement, which they entitled Andante with Jazz, in June 2011 at three venues in Berlin: the Spandau Freilichtbühne an der Zitadelle; the Heilig Kreuz Kirche, Kreuzburg; and the Kaiser Willhelm Gedächtniskirche.

Our daughter Paula has put my latest pdf copies of Andrew's 3 quartets on the website, to be sold as digital downloads, as well as performances which I originally recorded on cassette and have converted to CD.

Anna was a toddler at the time of the composition of String Quartet No.1 and Paula a twinkle in her Dad's eye!

Because of the initial reaction to his first string quartet, Andrew chose a serious and passionate atmosphere for his String Quartet No.2.  The outstanding Isis Quartet (Michael Seal, Leon Gee, Garry Doidge and Fa Fa Jin), premiered this work on 5th December 1989 in the Adrian Boult Hall, as part of the Birmingham Conservatoire Festival of New Music and Art.

The Isis String Quartet went on to perform the work at venues throughout Britain, including the Fifth International String Quartet Week at the Countess of Huntingdon Hall, Worcester, in April 1990 and 2 performances at the London International Opera Festival at the Place Theatre in June 1990.  Andrew and I went to both of these events. The London one took place just before a short opera composed by 3 of  Andrew's students.  While we were waiting for the performances, Andrew and I had a lovely time exploring the quaint streets and cafes in Bloomsbury, just a stone's throw from the busy Euston Road.

What I remember about the first performances of String Quartet No.2 and the Isis Quartet, however, was the wonderful framed drawing which  the players presented to Andrew and which featured a chimpanzee sitting in front of a musical score and saying: "Lovely sound, lads.  Could be more passionate, though!"  The quartet had all signed it and put: "To Andrew ... for the challenge ... the excitement ... the caring!" (See the picture under the main title above.)  Andrew's relationship with his students was, and still is, a very close and caring one.

The Almira String Quartet then took up the work and gave performances in the Birmingham Museum and Art Gallery in January 1992 and in the Church of the Christian Community, Stroud, in February 1992.

'Downes's style seems to combine the least cloying aspects of English pastoralism with dashes of European eclecticism.  He is also an unashamed romantic, and is not afraid to use words like aggression, tenderness and dreamlike to convey his intentions.
'Yet there is no sentimentality or self-indulgence.  The musical points are made with terse cogency and economy of means - quite brilliantly so in the finale.  With the Andante Downes shows that traditional beauty of expression still has a place in late twentieth century music, and need not sound derivative.'
THE BIRMINGHAM POST

In 2020, in celebration of Andrew's 70th birthday year, the Amabile Quartet, Anna Downes (violin 1), Chloe Baker (violin 2), Dan Neville (viola) and Joanne Jefferis (cello), recorded String Quartet No.2 during the Coronavirus pandemic.  Their recording of all 4 movements, together with a film by Paula Downes, can be accessed on the 'Film and Video' link of this website.  The movements were shared individually online in October and November and the whole work in November 2020.

String Quartet No.2, mini extract from the last movement

Andrew dedicated his String Quartet No.3 to Indian composer, John Mayer, whom Andrew had appointed Composer in Residence in the new School of Composition and Creative Studies, which Andrew set up in 1992 at Birmingham Conservatoire.  John Mayer was a fount of knowledge on Indian ragas and also encouraged Andrew to make 2 concert tours with him to India.  The String Quartet No.3 has strong Indian influences.  It mimicks the sitar, the tanpura, the tabla and uses aspects of ragas.  The Almira Quartet (who had also given 2 performances of String Quartet No.2) commissioned and gave a superb first performance of the work in the Birmingham and Midland Institute in 1995.  They went on to perform it in numerous venues around the UK thereafter.  Their performance in the Countess of Huntingdon Hall, Worcester, can be heard on the 'Sounds' link on this website.

When our daughter, Paula, was a student at Cambridge, she formed, with 3 fellow students, the Thomas Quartet.  They performed Andrew's String Quartet No.3 in St John's and Trinity colleges in March and May 1999.  Paula had the task of mimicking the tabla on her violin.  The stunning performance by the Thomas Quartet in the wonderful acoustics of the Chapel of Trinity College is also availabe on the 'Sounds' link on this website.

String Quartet No.3, mini extract from the raga section