My Life Publishing The Music Of Andrew Downes 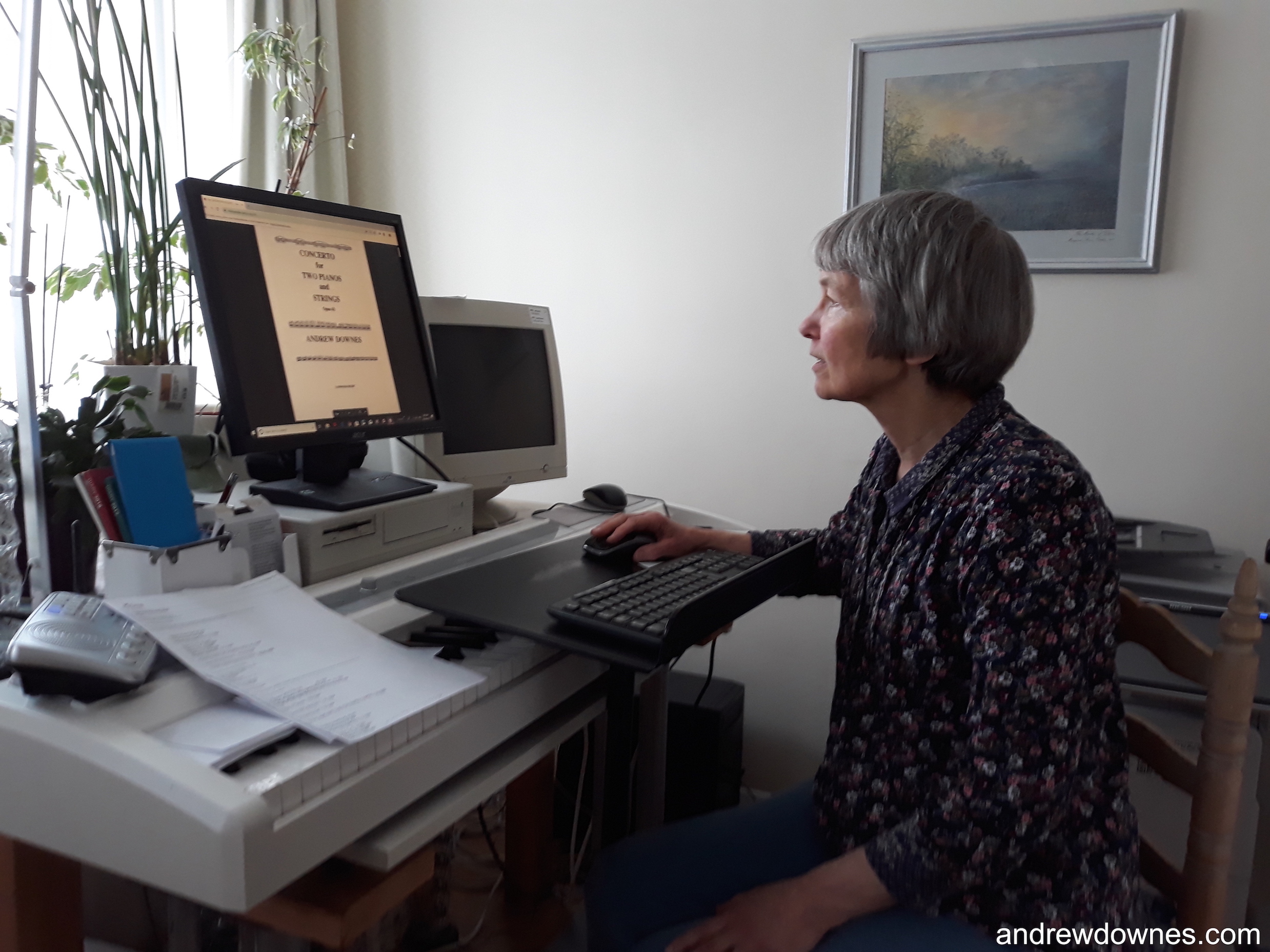 An account by his wife and publisher, Cynthia Downes, posted on March 12th, 2019

I first discorvered Andrew's muscial gifts when he was 16.  We both played in the Staffordshire County Youth Orchestra.  One day Andrew brought along to a rehearsal a Symphony which he had composed, and asked the conductor, Maude Smith, if the orchestra could try it.  She agreed, although composition wasn't highly thought of in those days.  Composers were called Mozart or Beethoven.  During most of the 20th Century people thought you "made up" a piece if you couldn't play the "real thing".  Andrew's Symphony was in the style of Haydn.  Maude Smith's reaction was: "Couldn't you put some modern chords in it, Dear?".  I, however, was bowled over by the writing.  I was in the second violins, who often get a boring part in classical music.  Andrew's second violin part was really creative and original, a joy to play.  I told Andrew that Haydn would have been delighted to compose this work!  Andrew was later very instrumental in establishing and pioneering composition and creative music in schools and colleges through his School of Composition and Creative Studies at Royal Birmingham Conservatoire.

When he was 17 Andrew proved how extremley talented he was when he came 2nd out of all the candidates in the 1967 Cambridge University entrance exam in music.

When we bought our first house in Lynwood Drive, Blakedown, (hence the name of our publishing company), just before our wedding, our brother-in-law, David, drove our stuff to our new dwelling for us.  I was very amused and horrified to see Andrew's precious compositions mixed up with screwed up old bank bills and Mars bar wrappers!  I thought to myself, "He needs organising!".  I carried my penchant for sorting out through to the setting up of Lynwood Music in 1978.

In the early days of his composing, Andrew wrote all of his music out by hand. This included every single part for every instrumentalist, if he was writing a symphony, for example.  In 1978 we realised Andrew needed a publisher. The problem was he didn't want to sell his copyrights or have an editor dictating who could perform his music and when.

I was at home looking after our baby, Anna, at the time (apart from 2 evenings a week teaching at Kidderminster and Dudley colleges) and said I would take on the publshing. We asked Andrew's Dad and a colleague if they wanted to come in on the new venture with us, but they felt they didn't know enough about it. Neither did I!  I just knew I was a practical person and enjoyed making and designing things.  I said I would give it 5 years. If it wasn't working, we would think again and I would go back into school teaching.

From day one I was kept super busy with all the work generated by Andrew's compositions.  We lived in Lynwood Drive, Blakedown (Worcestershire) in those days, hence the name of the company: Lynwood Music. First we had to register the business name and then I had to learn the music publishing laws. For example, for every work published you have to send a copy to the British Library, and 5 copies to the Agency for the Libraries of the Universities of Oxford, Cambridge, Edinburgh, Aberystwyth and Dublin. These in themselves generated interest and eventually I got orders from Blackwell's of Oxford, who supplied other libraries.

We started off with only a photocopier. At this time photocopiers were such heavy machines that I had to use ours on the floor!  It required bottles of ink and a sort of photographic paper on a roll.  I stapled the pages down the edge within a card cover. We asked my Dad to grace the covers with his beautiful calligraphy. 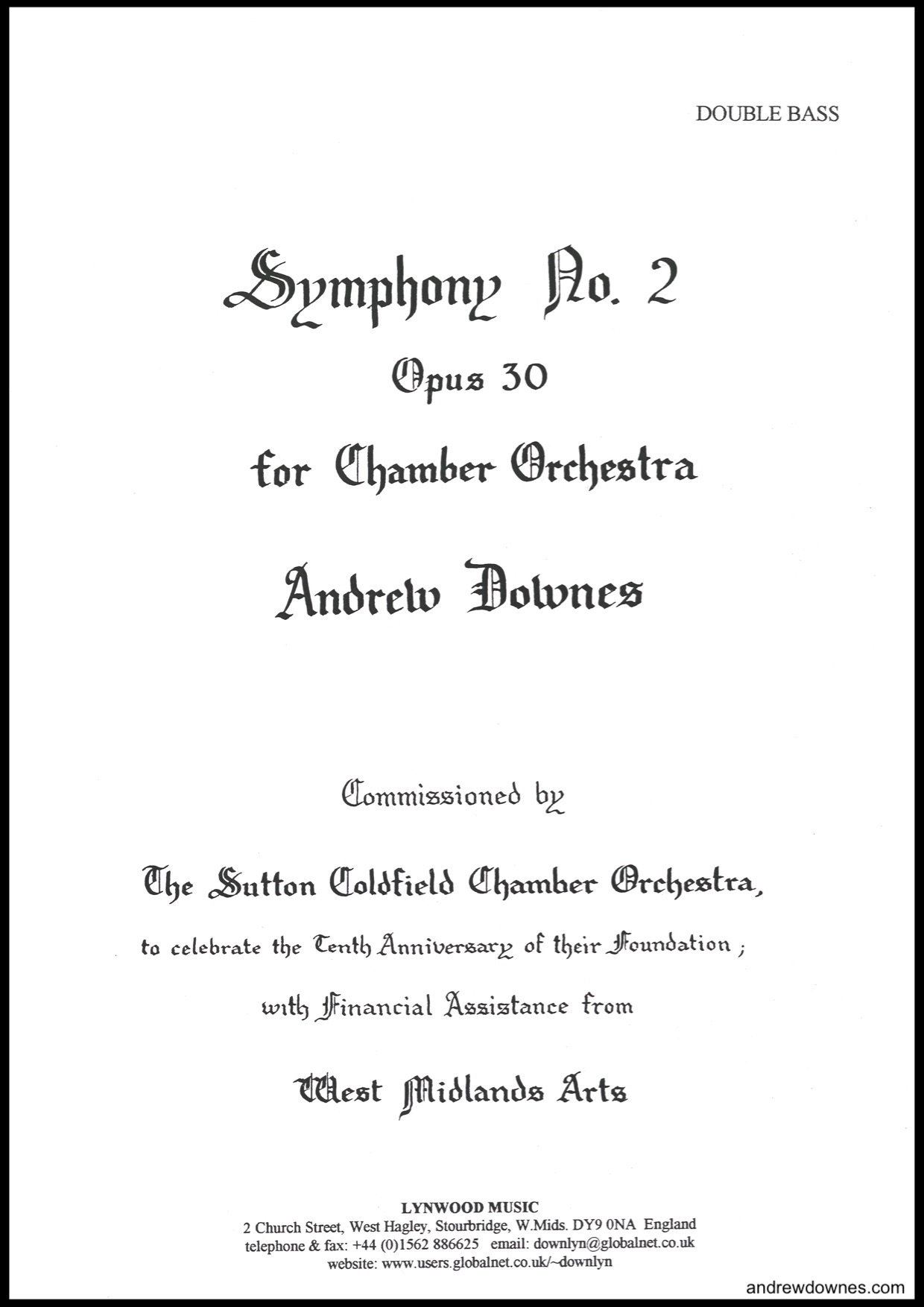 The early copies which I made are all facsimiles of Andrew's own handwriting. 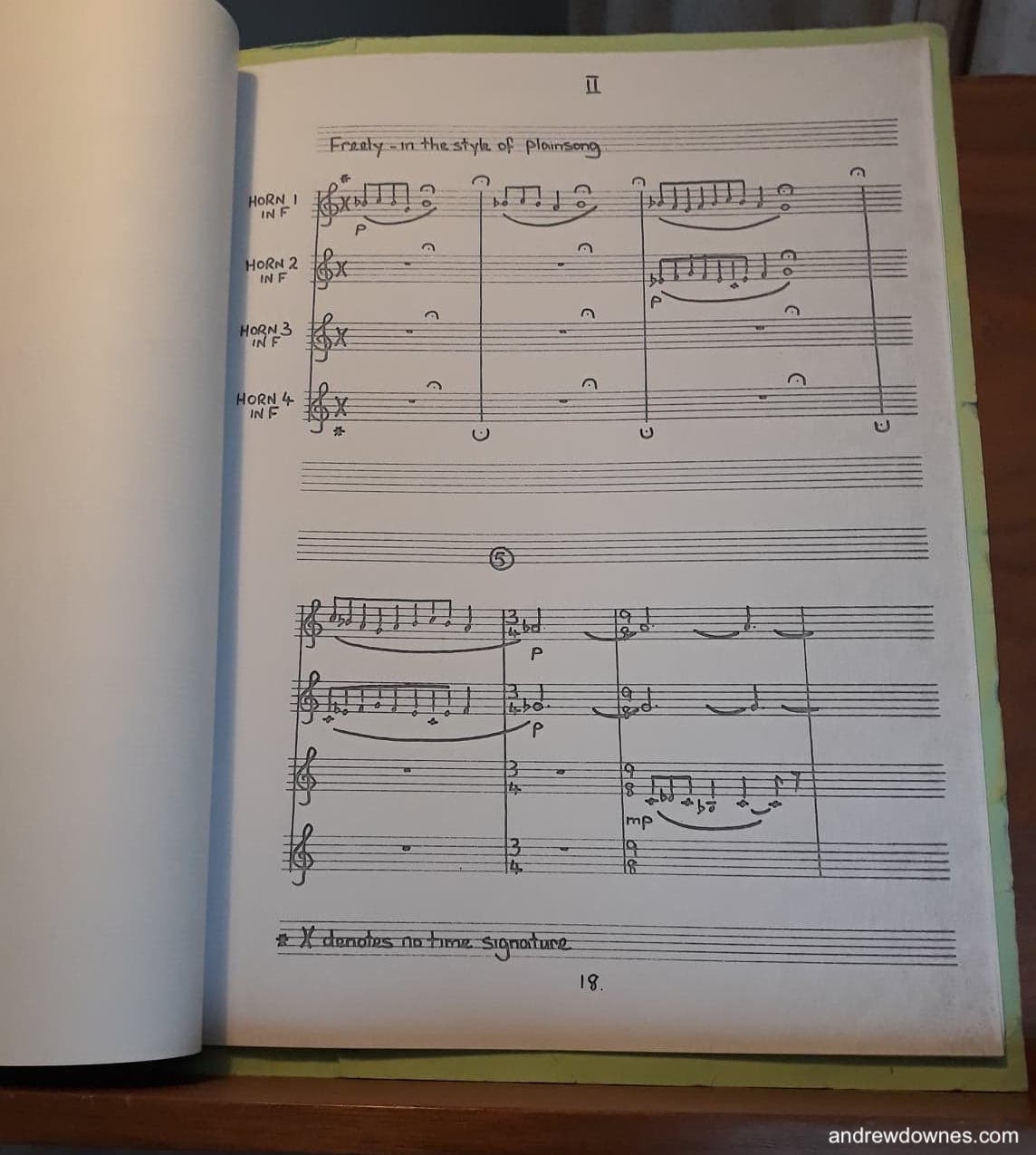 An example of a facsimile of Andrew's own handwriting.

Before long we obtained a much better photocopier, thanks to a very generous gift of half the cost of the machine from a neighbour of Andrew's parents, Margaret Brittain, who took a great interest in what we were doing.  To express his appreciation to Margaret, Andrew dedicated his work The Marshes of Glynn (for tenor solo, SATB choir and symphony orchestra) to her. 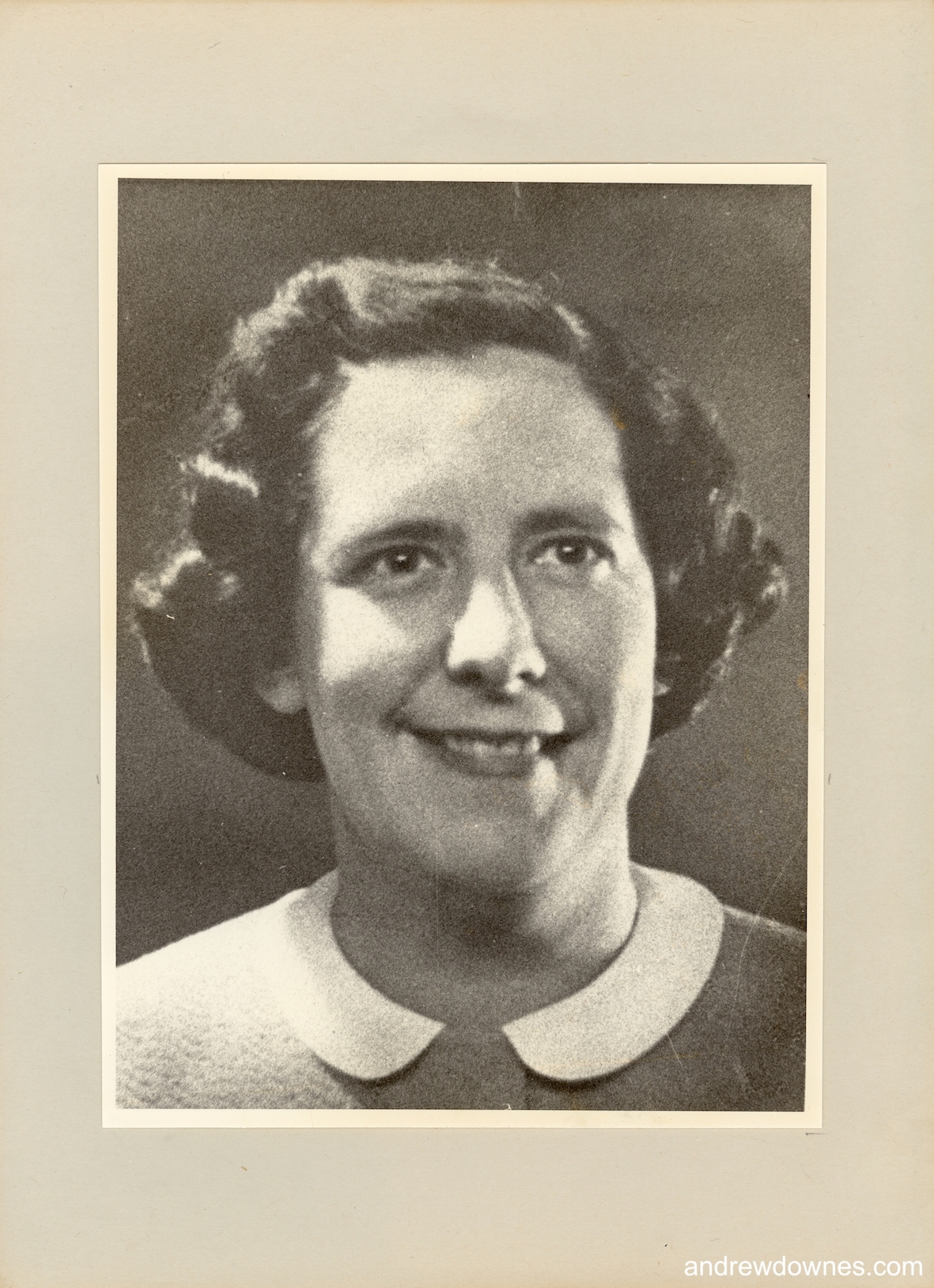 Margaret Brittain, generous neighbour of Andrew's parents, who paid for half the cost of a photocopier for Lynwood Music.

I still have a set of Andrew's Symphony No.1 parts which I made at this time.  We used them, with new labels, for Andrew's 65th birthday concert. The players loved them! I was amazed, because at the time they were made, people didn't think they were properly published copies, being reproductions of Andrew's handwriting, and not typeset, but the players found Andrew's writing really clear. Andrew used a fine nib felt tipped pen during this period for writing out his scores and parts. 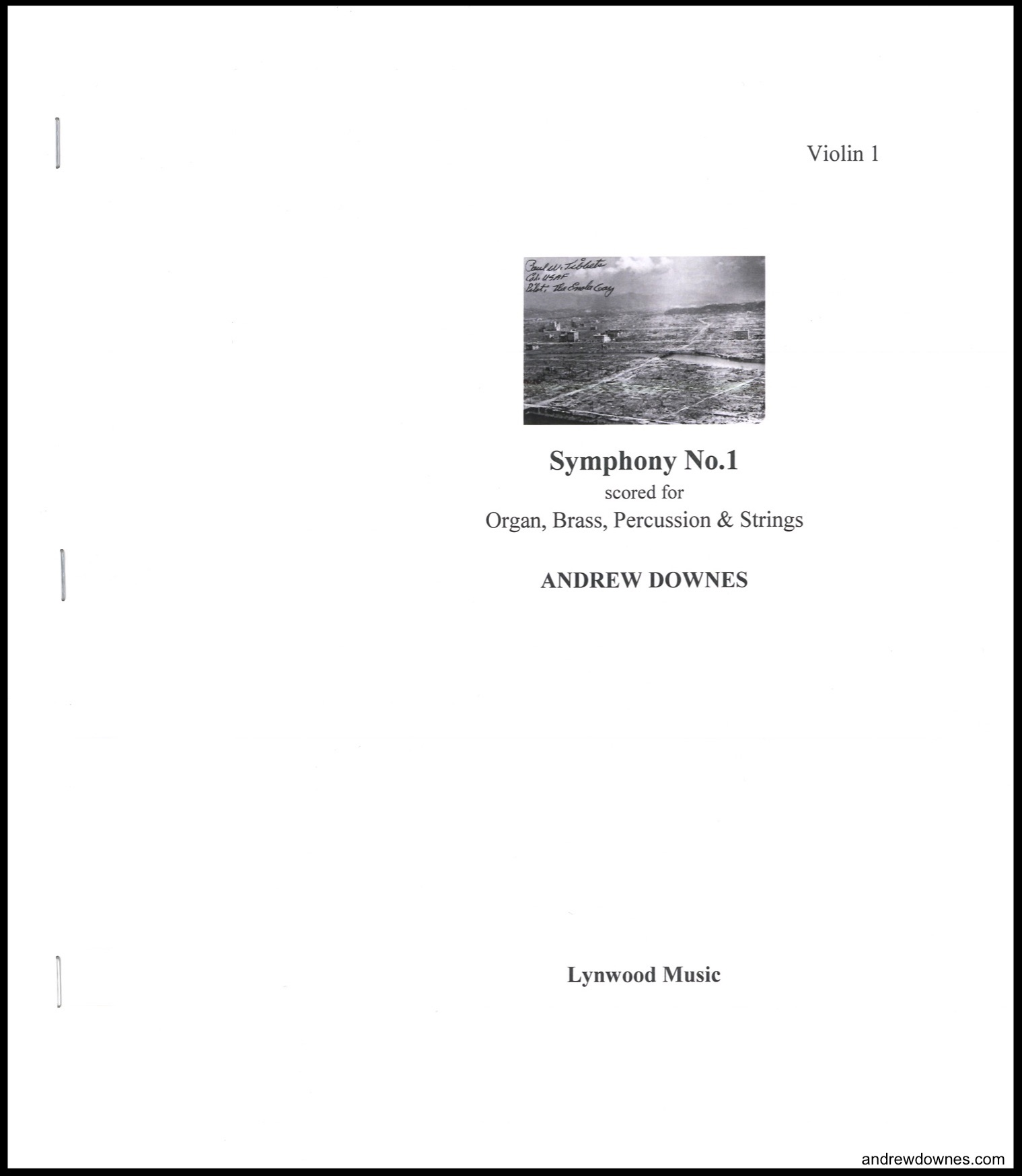 The original stapled copy and facsimile of Andrew's handwriting, revamped with new labels. 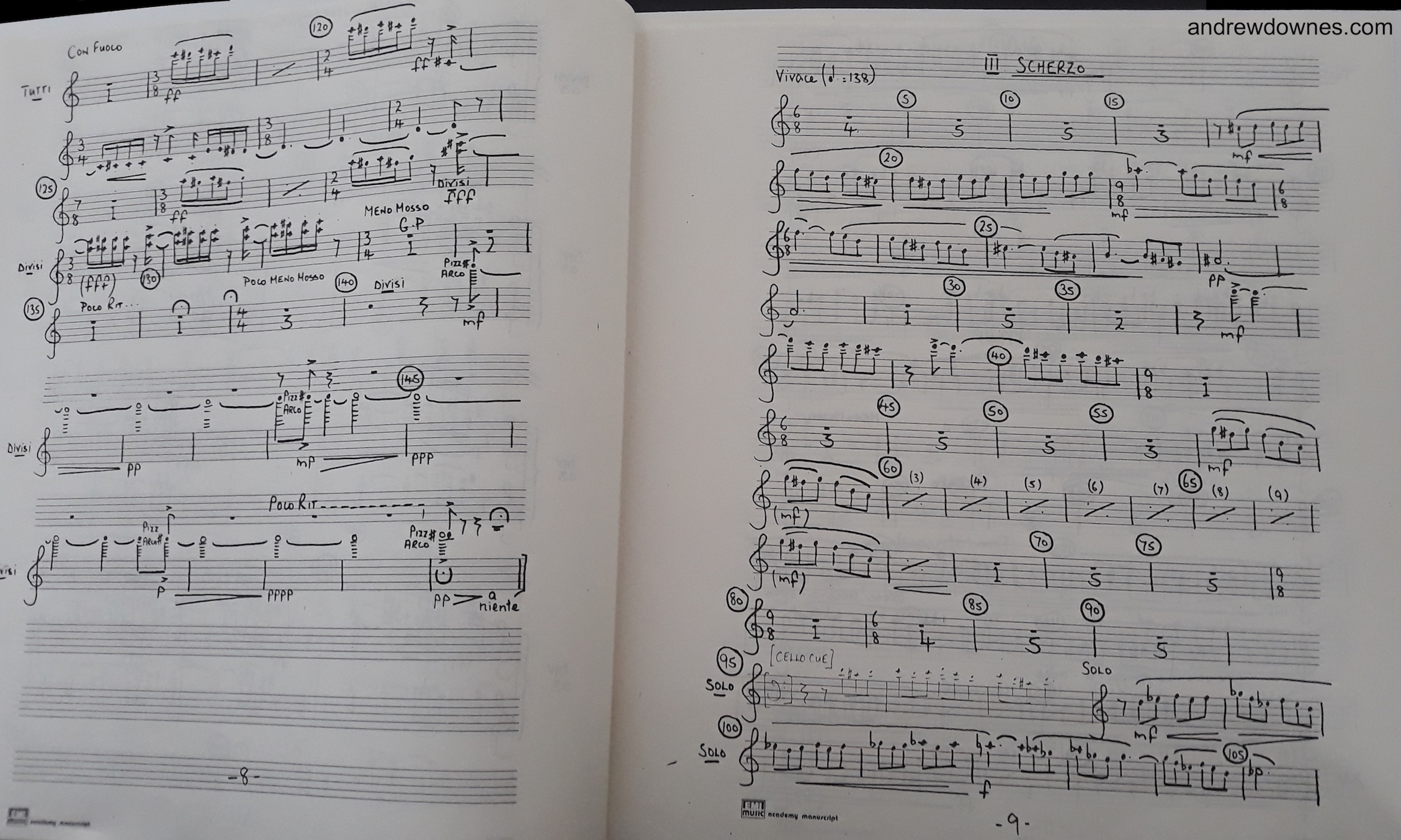 Inside Symphony No.1, violin 1 part.

When Andrew wrote his Ballads for Christmas (for high voices and harp/piano) in 1991, I determined that this work needed to be type-set, for a wider market.

Anthony Bradbury had just set up his Keyboard Typesetting business and we asked him to do Ballads for Christmas for us. I wanted an eye catching cover, so Anthony recommended artist Ian Tompson, and this was the beautiful result: it represents all the different cultures depicted in the work. 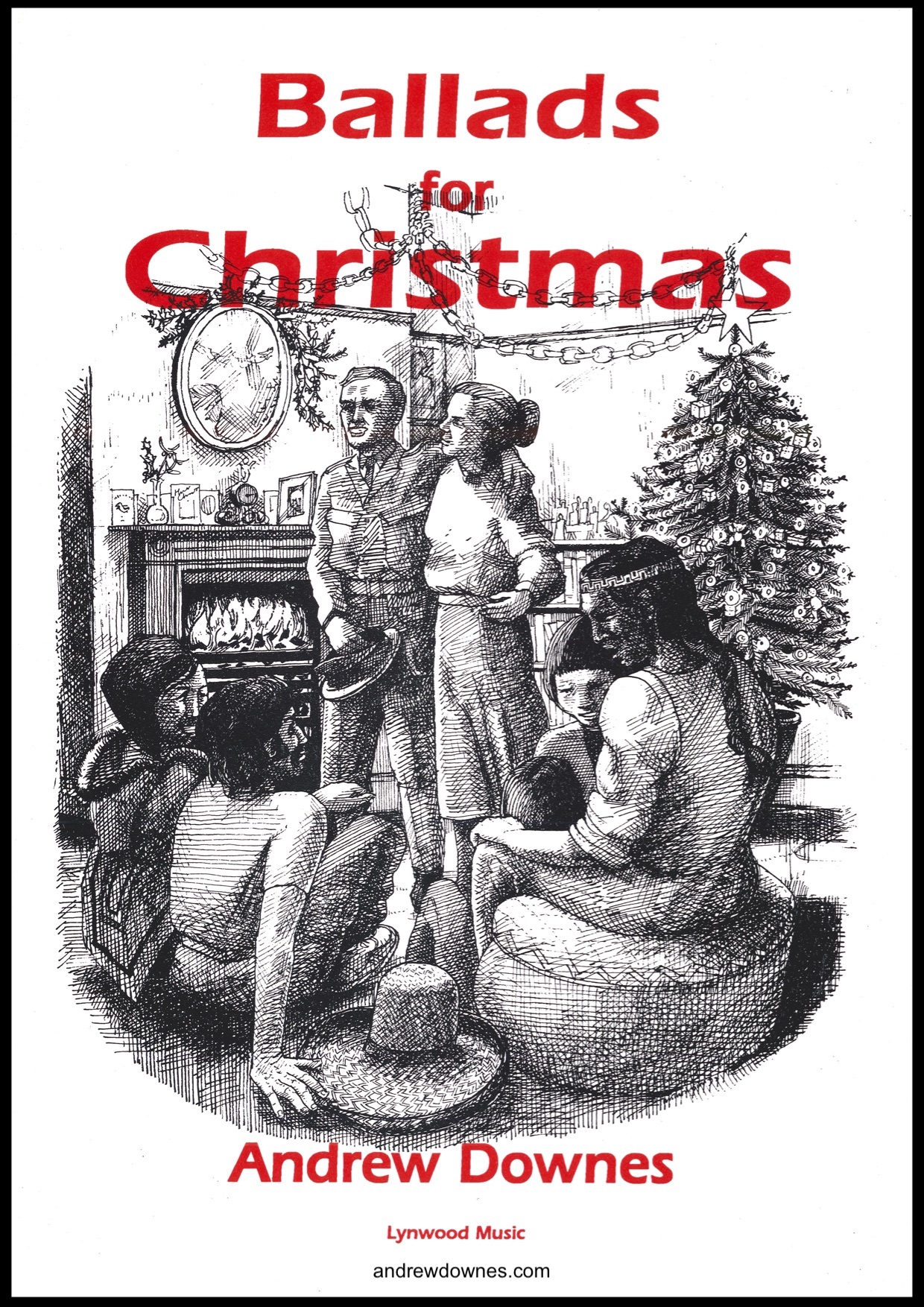 This piece started a spate of contracting out the type-setting of Andrew's works. I also typeset a number of them myself, especially very early ones which Andrew had written in blue biro. The proof reading was tedious work, so I was very glad when Sibelius 7 was invented.  Andrew now composed straight on to the computer. With this method he was immediately into print.

Andrew's first work which he composed on the Sibelius 7 programme was Towards a New Age in 1997 for the Royal Philharmonic Orchestra. Extracting the parts from the score was not so straightforward at this stage. The computer put dynamics, instructions and slurs in the wrong places on the parts, so Andrew had to check and correct them carefully. As the date of the premiere approached, I prepared all the scores and parts as usual.  Alarmingly, however, the RPO only rehearsed the work just before the concert (which was in Symphony Hall, Birmingham). Andrew was terrified in case the parts he had extracted from the score had mistakes which he wouldn't have time to correct. Fortunately there were no mishaps! 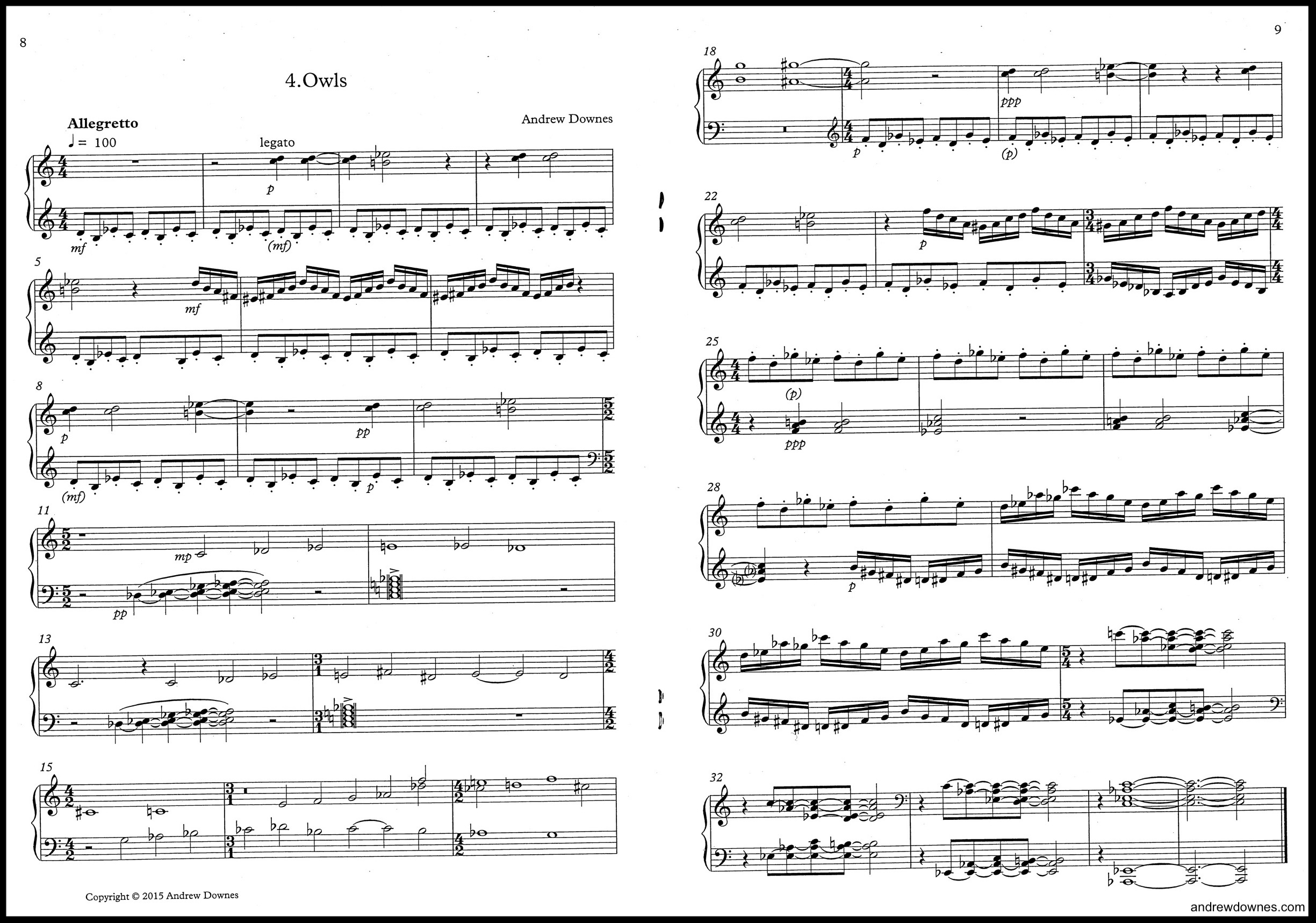 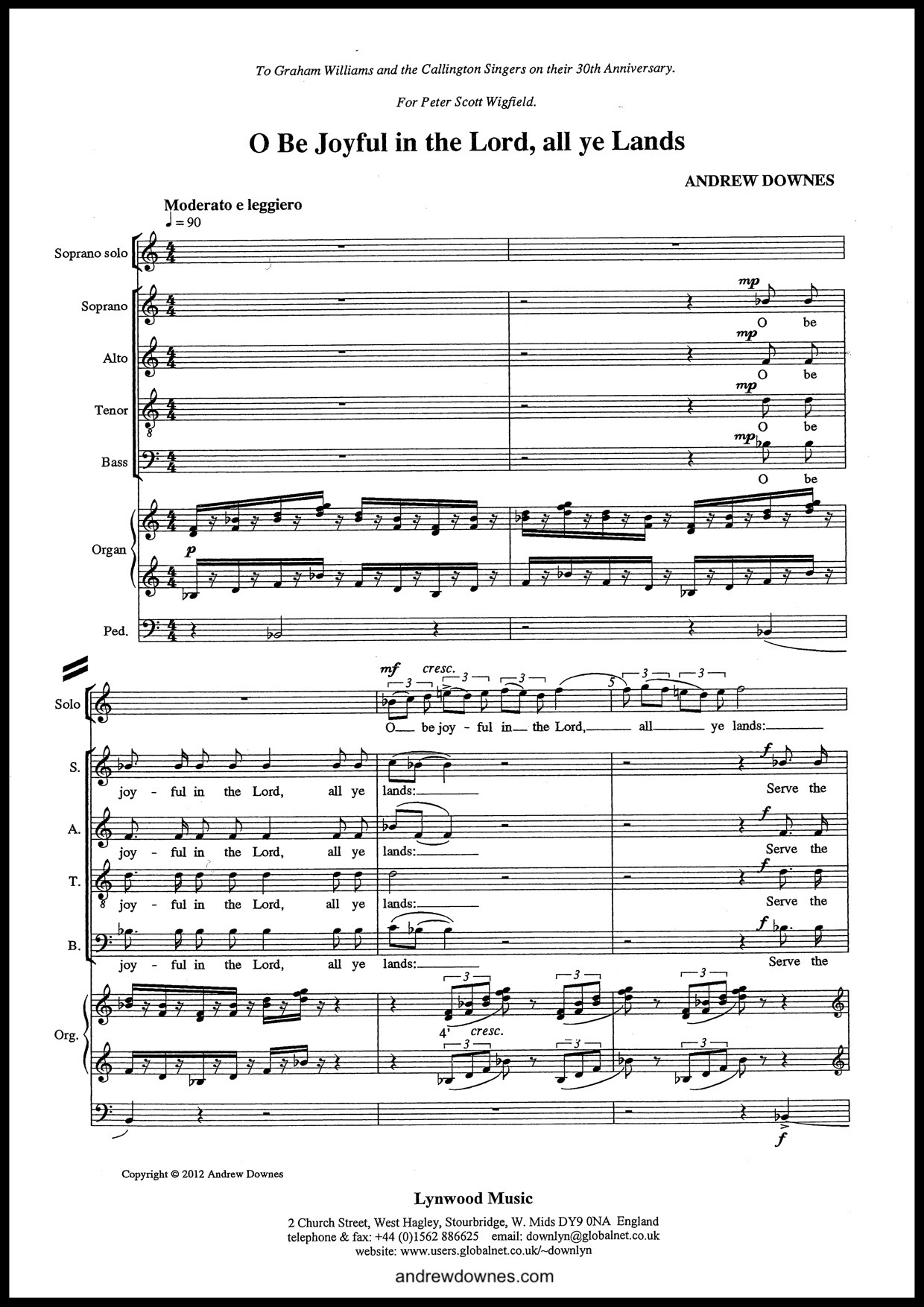 As time went on, we acquired all the equipment I needed to make the smartest possible copies. Fairly early on, Andrew's mum had discovered an ad from the Bindit binding company. We bought one of their heat binding machines and boxes of covers of various sizes for the thicker scores and also a long armed stapler for the thinner scores. Laminating the covers was also another step forward.  I have always enjoyed decorating the covers with Andrew's own music. And I now very much enjoy designing labels in colour for the full scores.

Scores created with the bindit machine and boxes of covers: 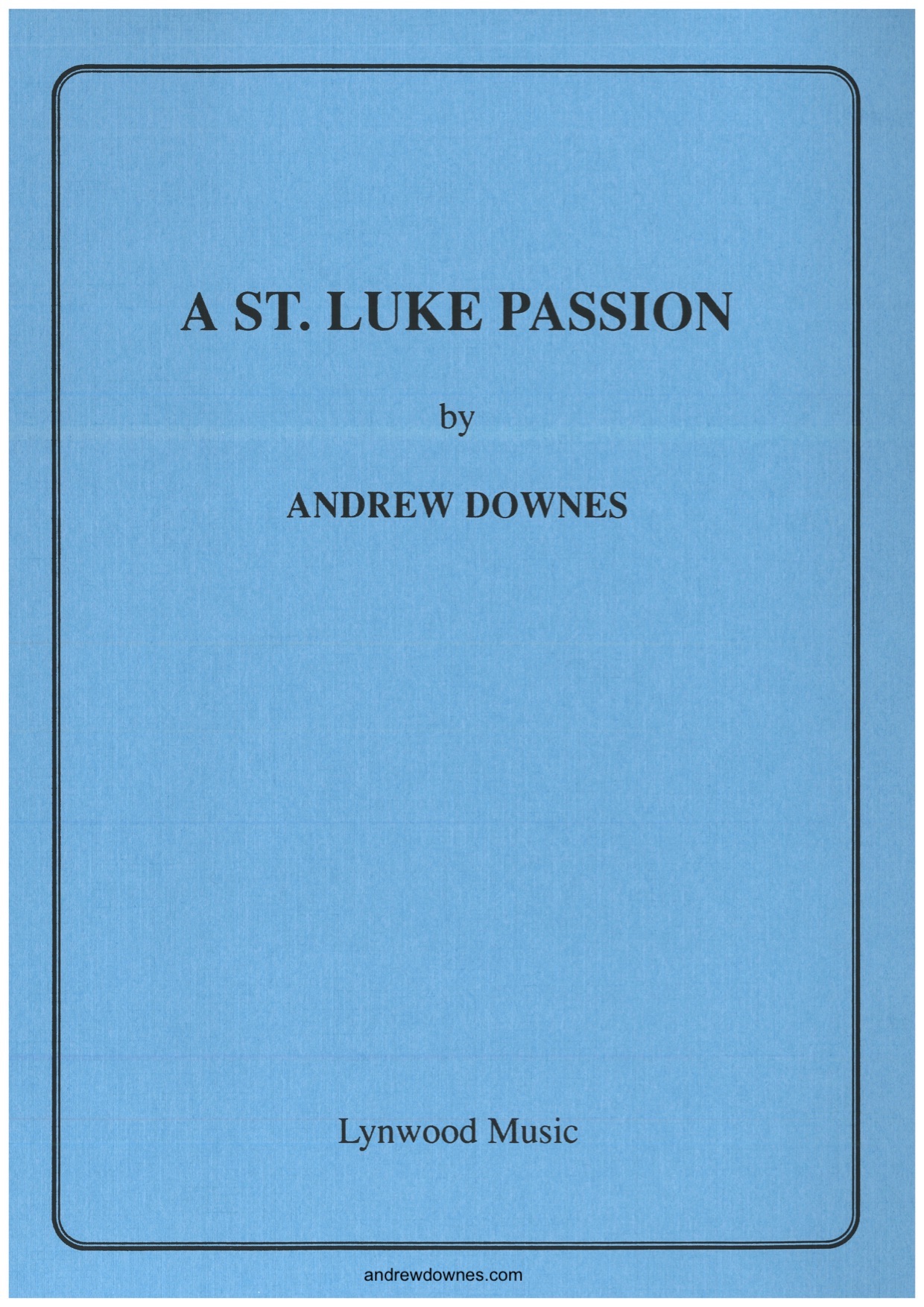 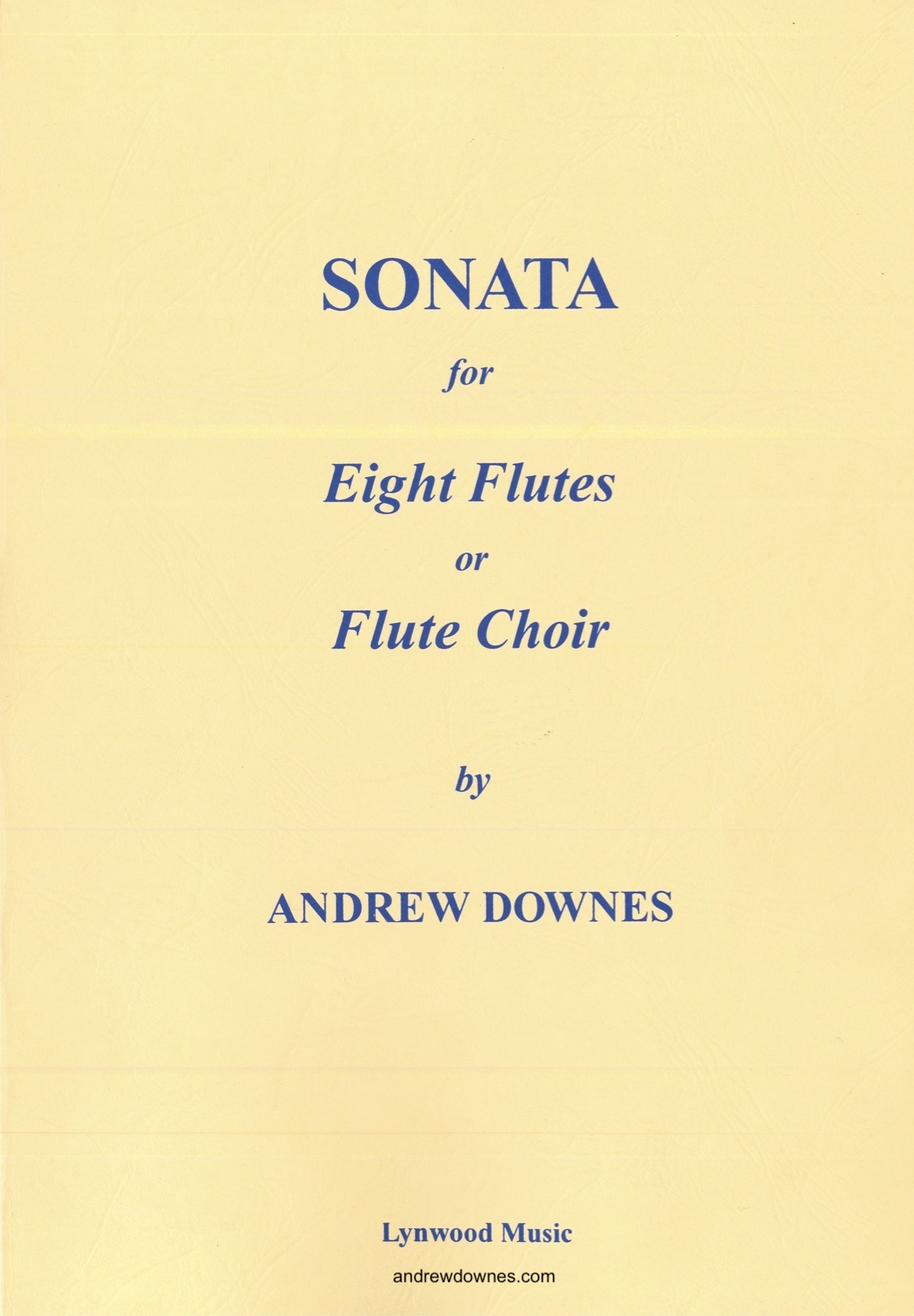 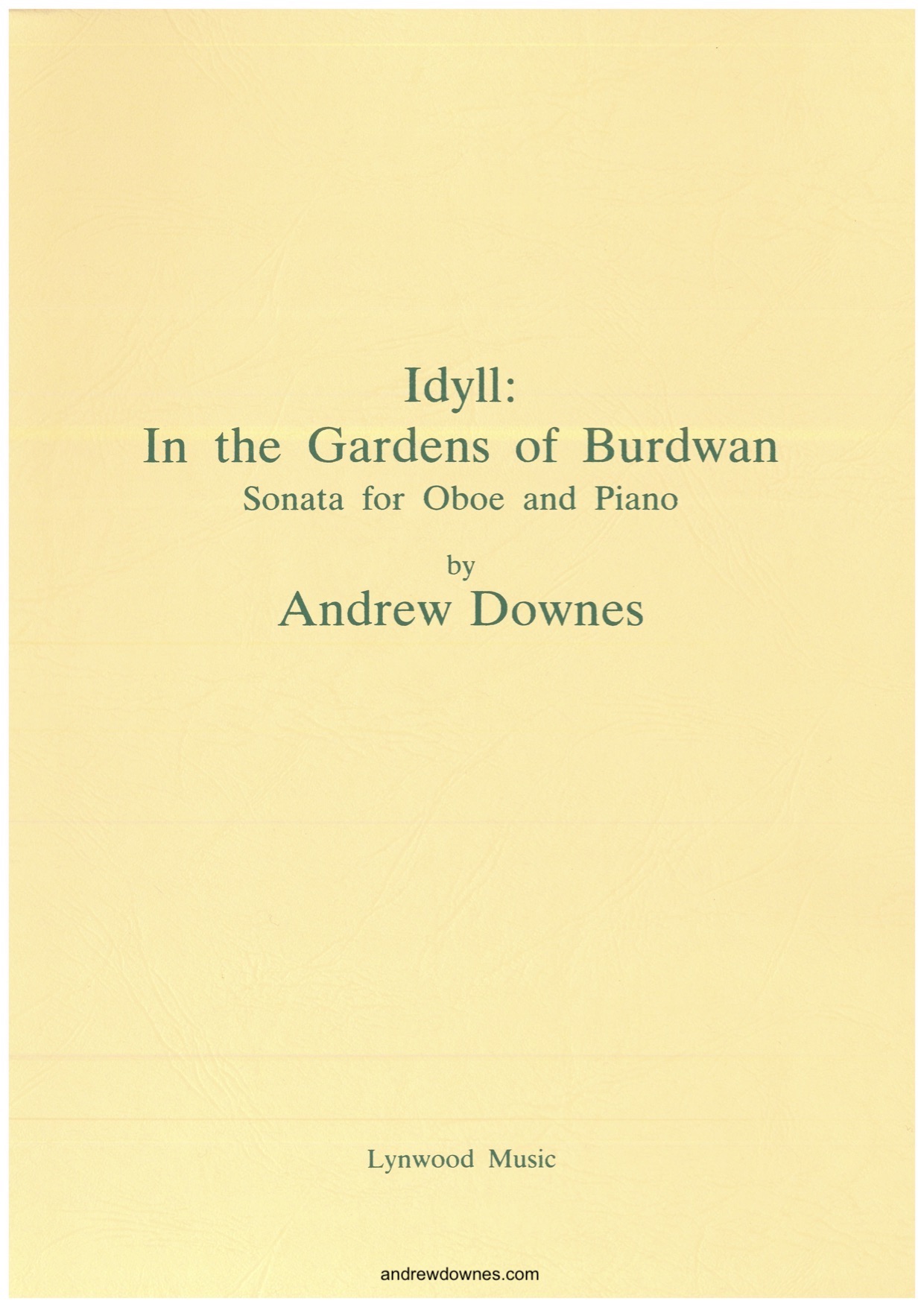 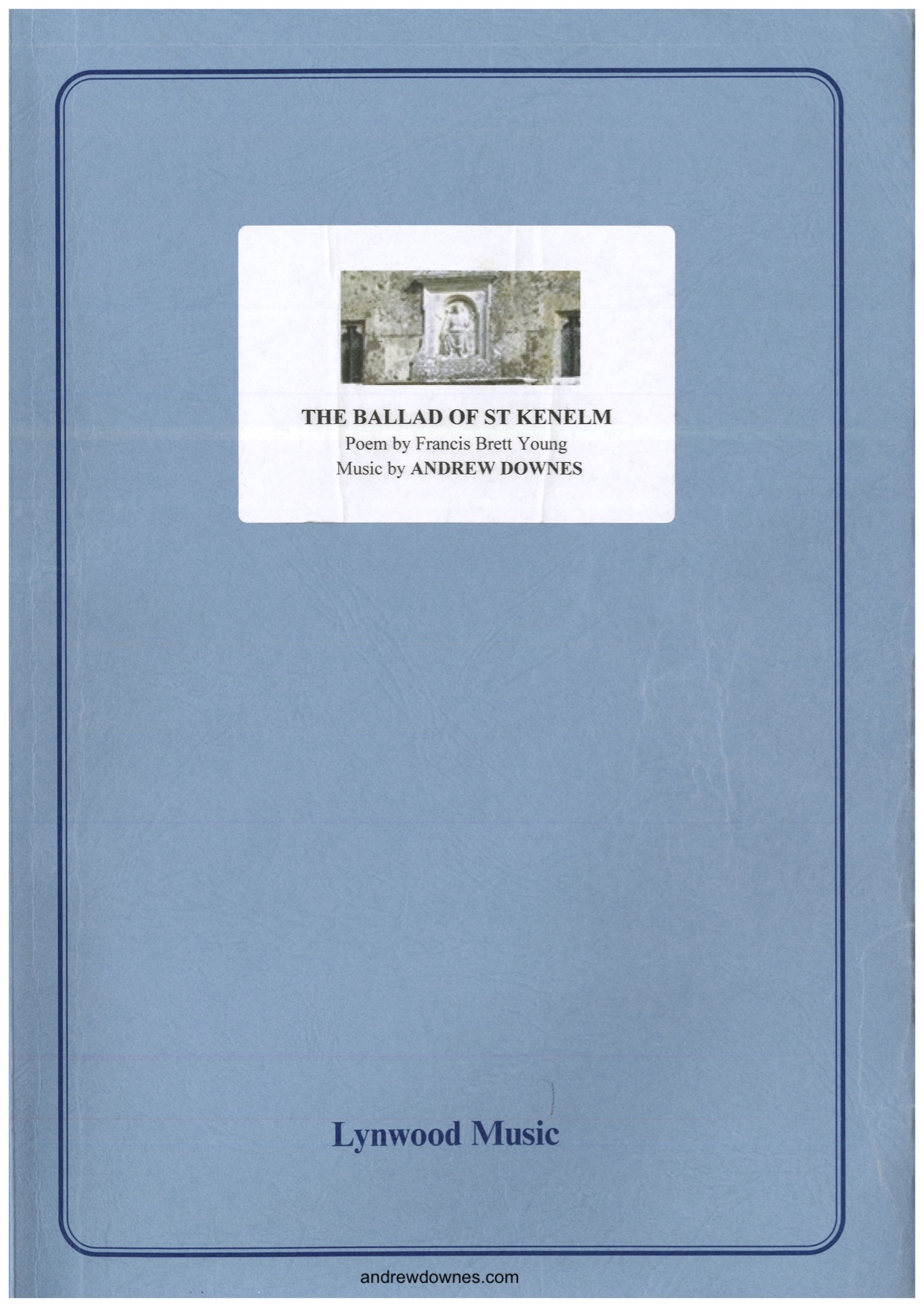 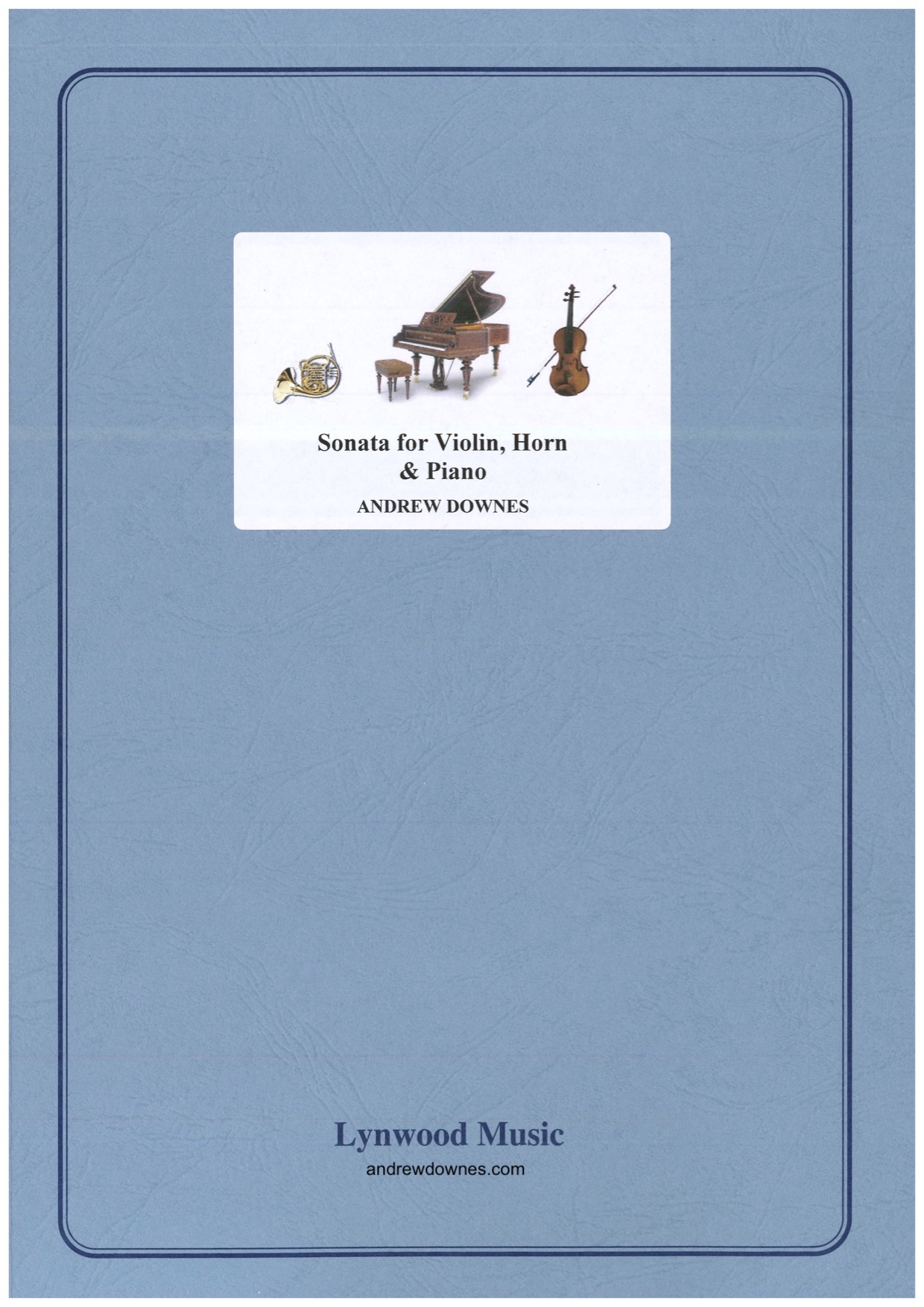 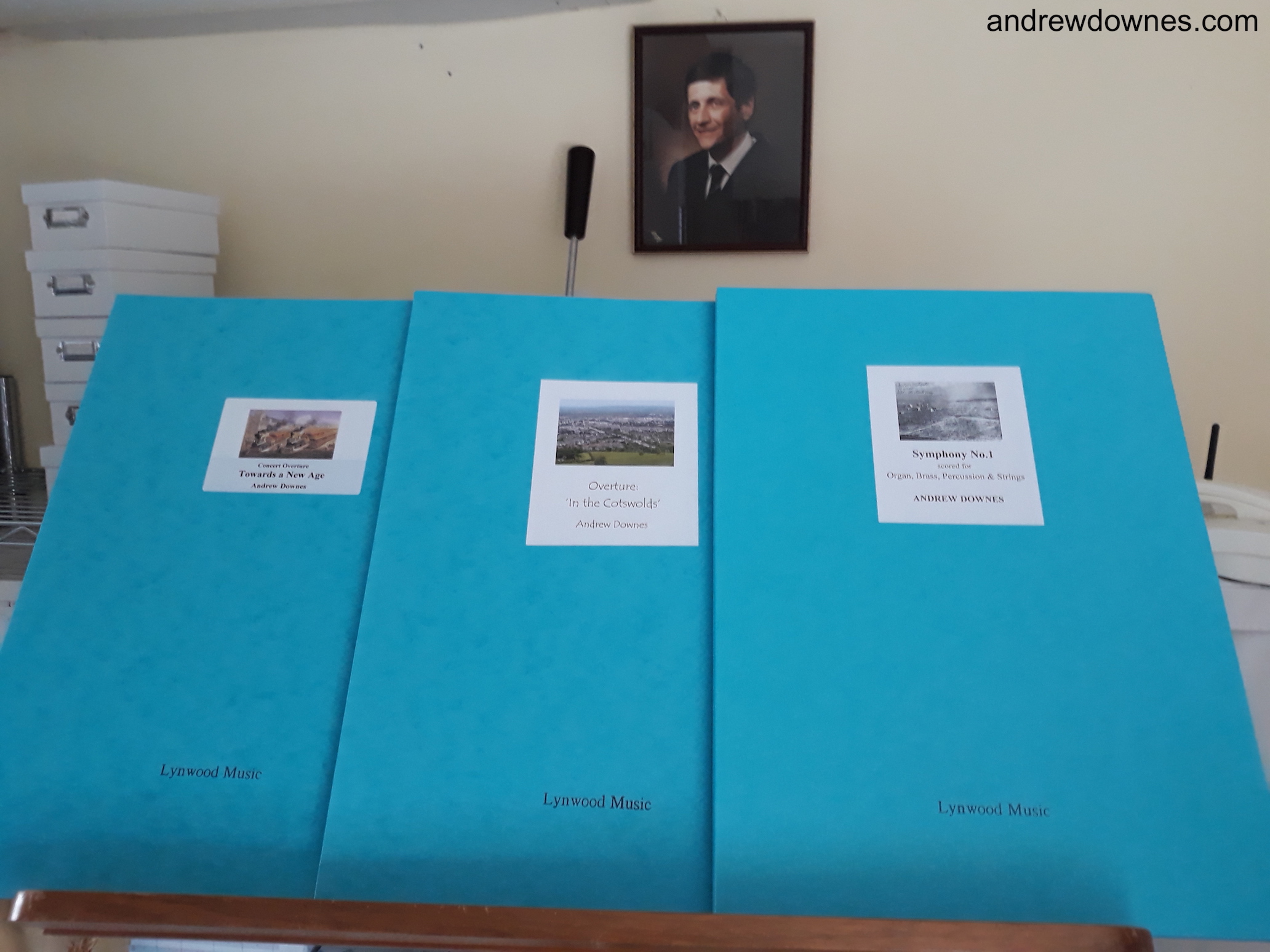 Scores with laminated covers and decorated with Andrew's music: 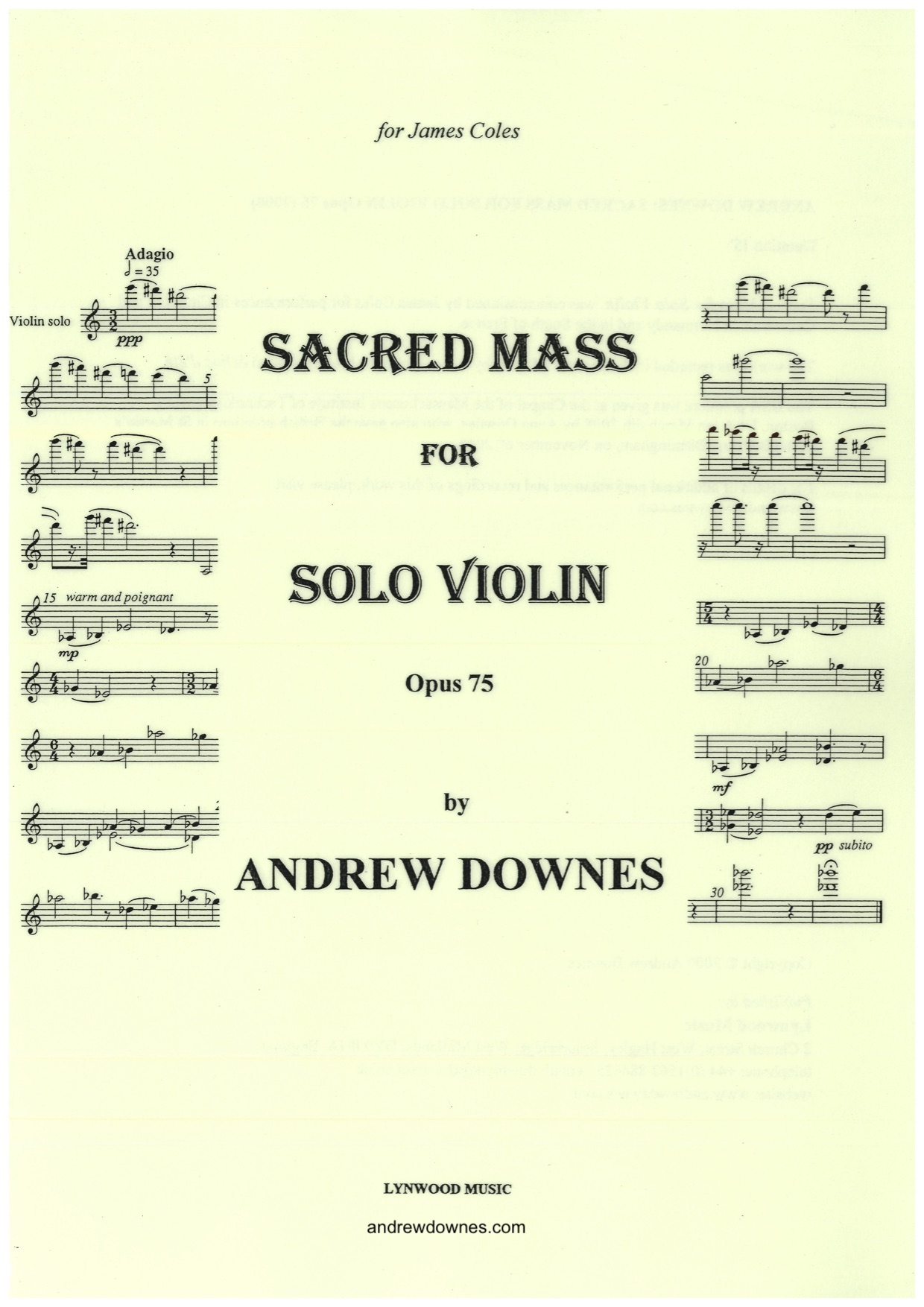 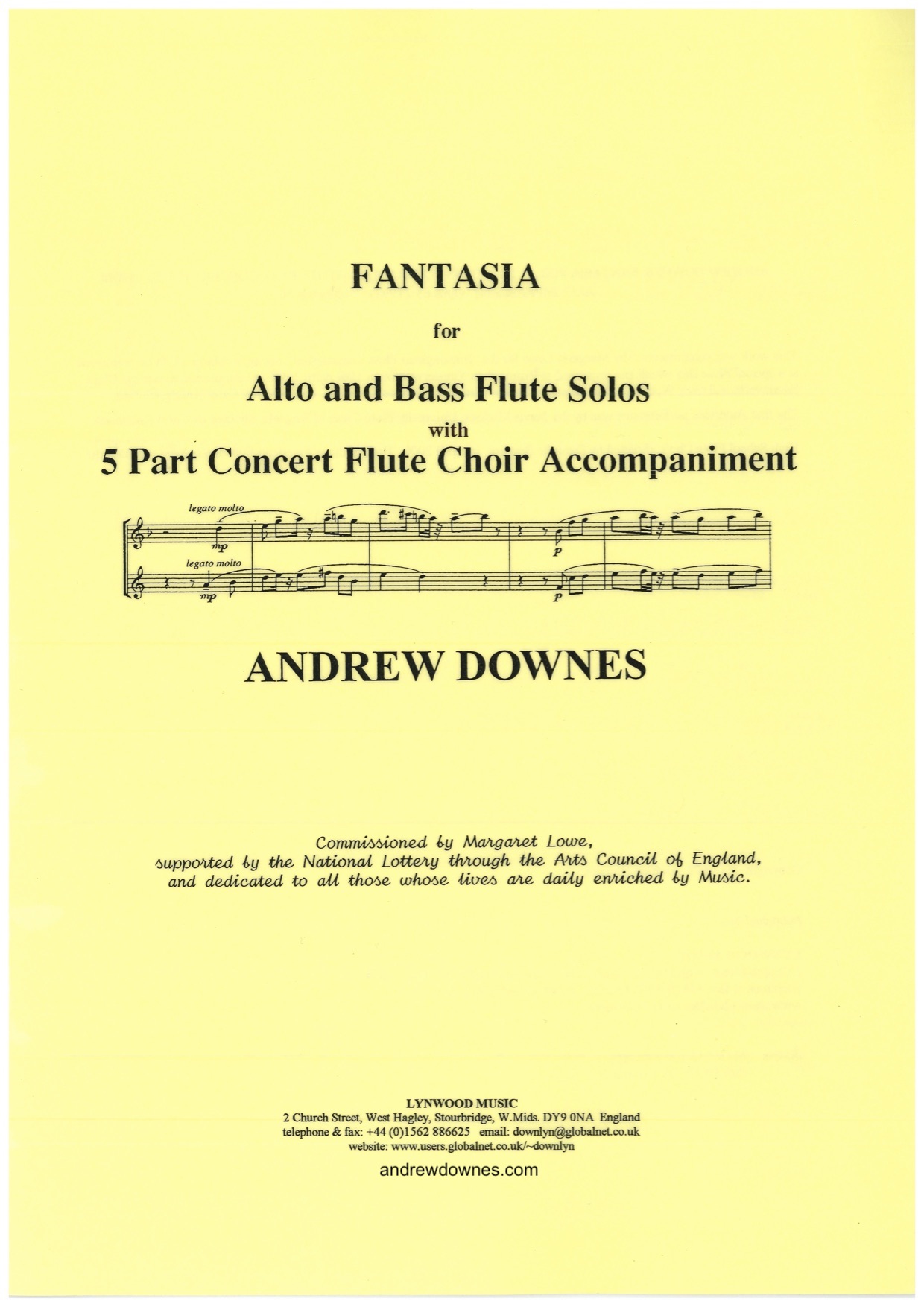 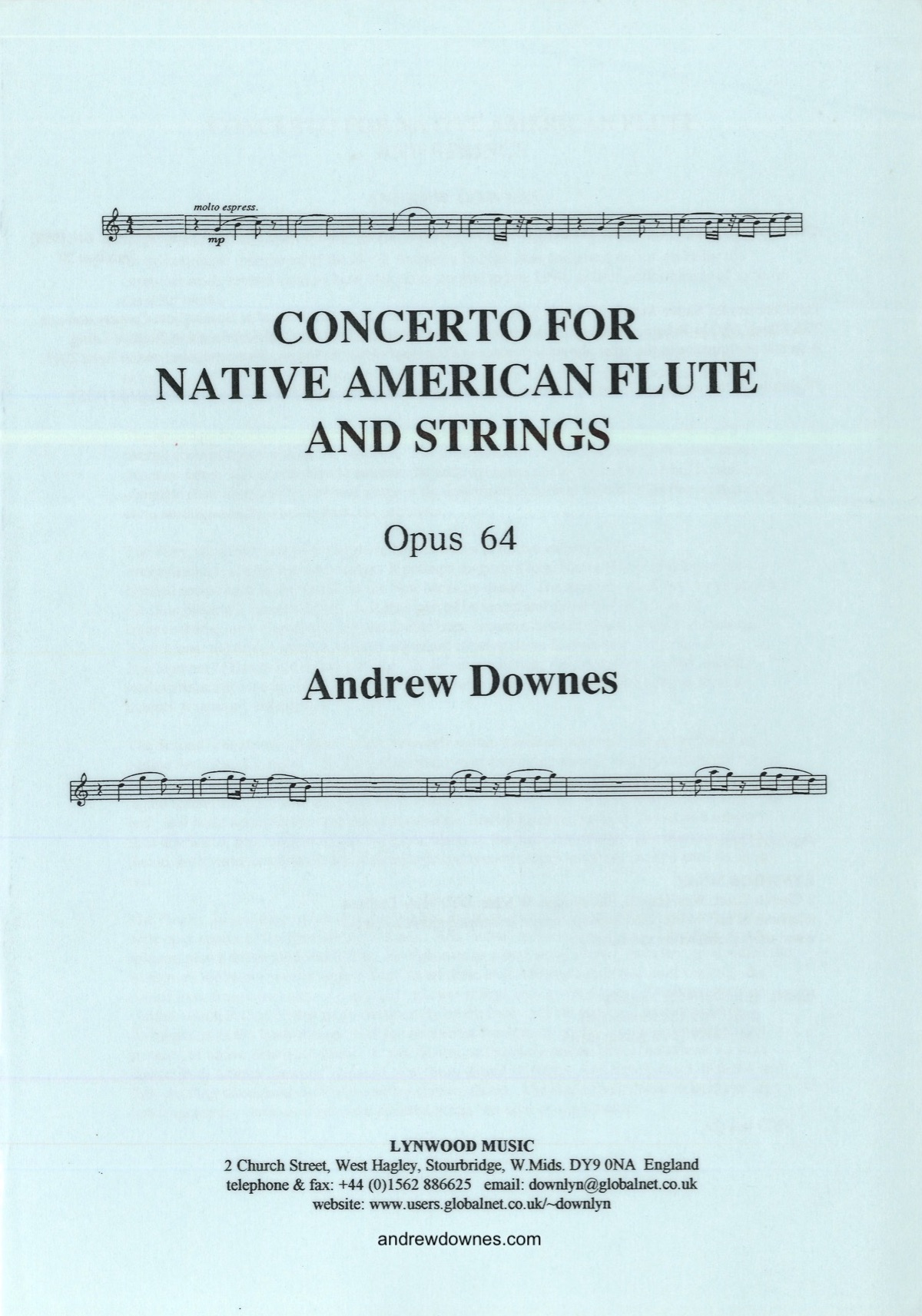 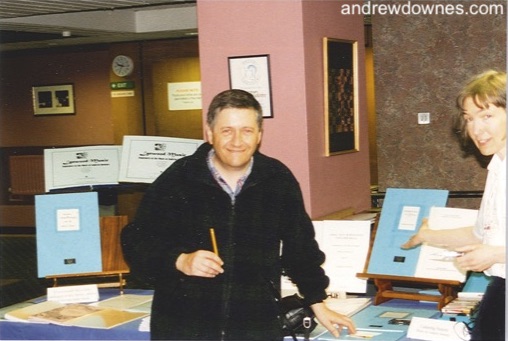 Developments in technology have accompanied Lynwood Music's journey as the years have gone by and the latest advance is digital downloads. People now prefer to buy their copies digitally rather than wait for mail order. I have spent a long time creating pdfs of all of Andrew's 110 works (to date) and emailing them to our daughter, Paula, who puts them on sale on Andrew's website.

We are now just informed of sales and I don't have to do anything. Having spent years photocopying, collating, binding, guillotining, producing invoices, packing and rushing to the post office with scores, I find the new system wonderful! One of Andrew's best selling works is his Sonata for 8 Flutes or Flute Choir. I have sent out about 300 sets of scores and parts of this work, mainly to the USA. Each set used to take me several days to make. Now I just enjoy reading a notice about a sale and doing nothing except jumping for joy!

Lynwood Music has also involved me in the production of LPs, cassettes and CDs, writing programme and sleeve notes, writing libretti, designing posters and adverts, creating brochures and lists of works etc etc. The computer makes it so much easier now. 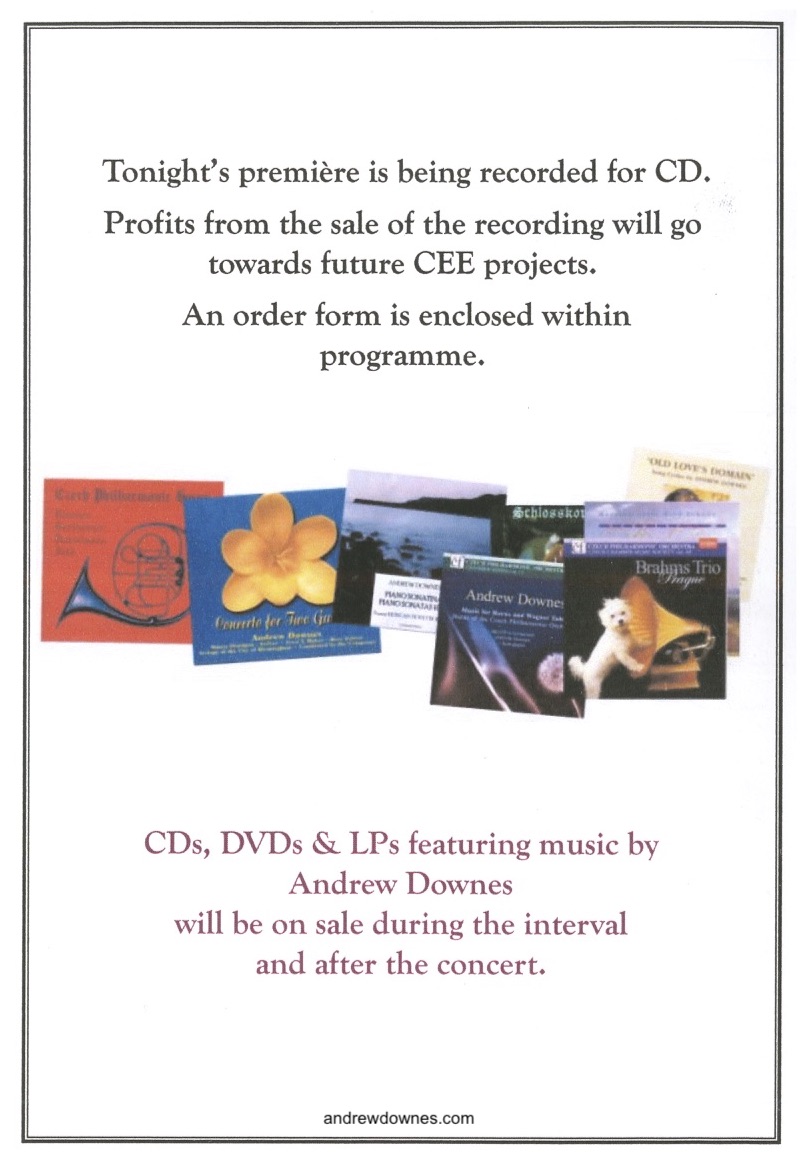 Very early brochures of Andrew's works produced on a typewriter: 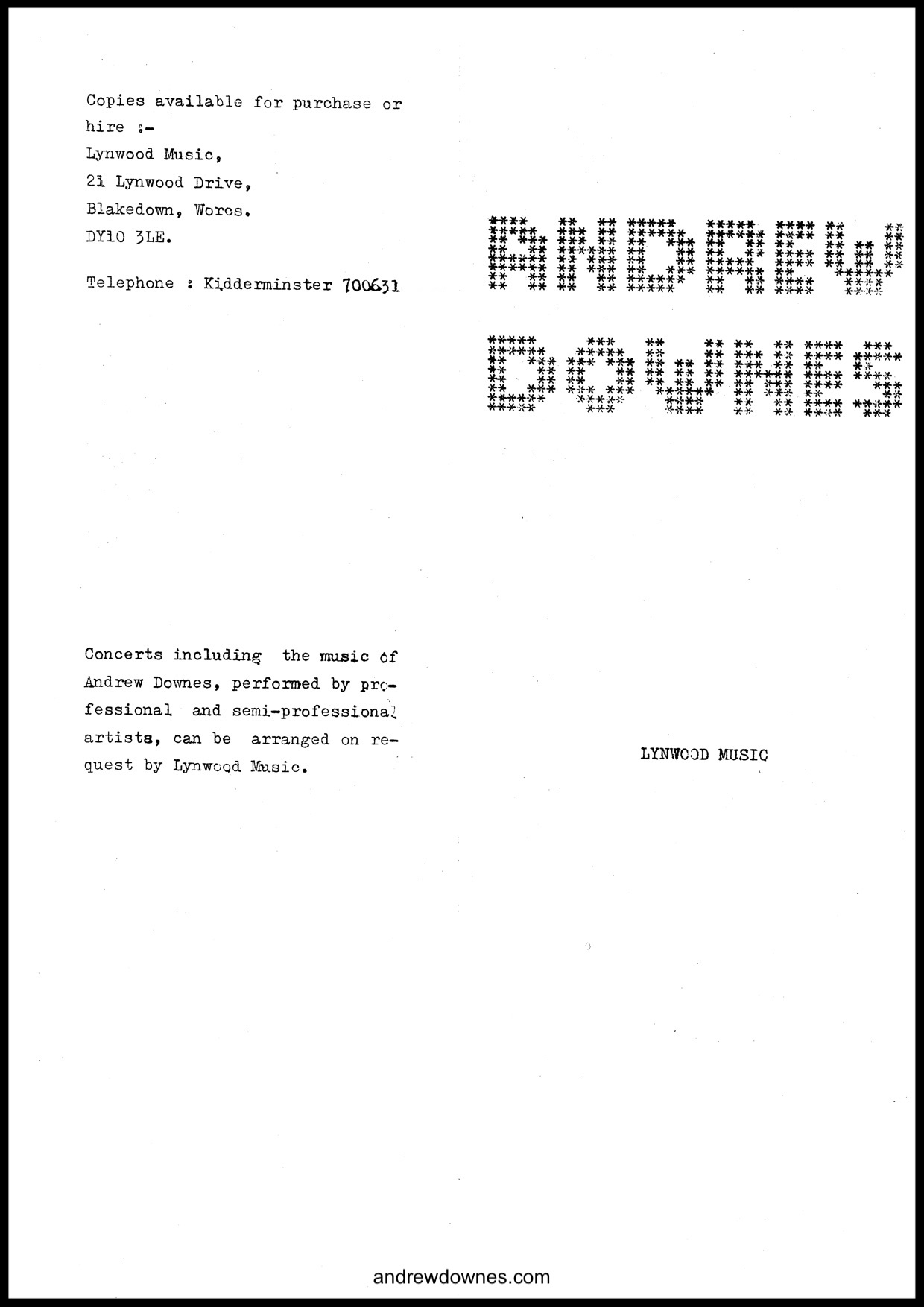 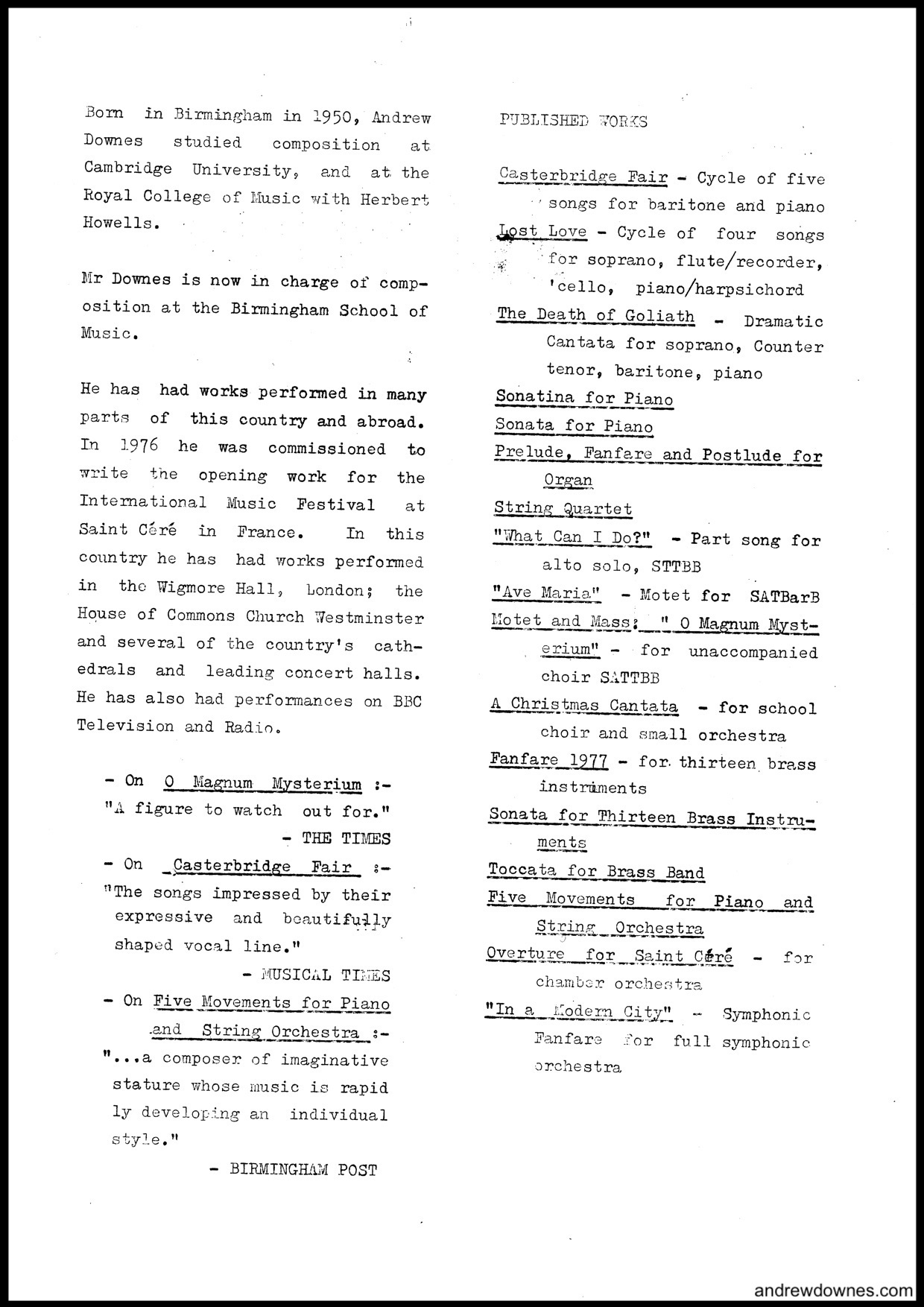 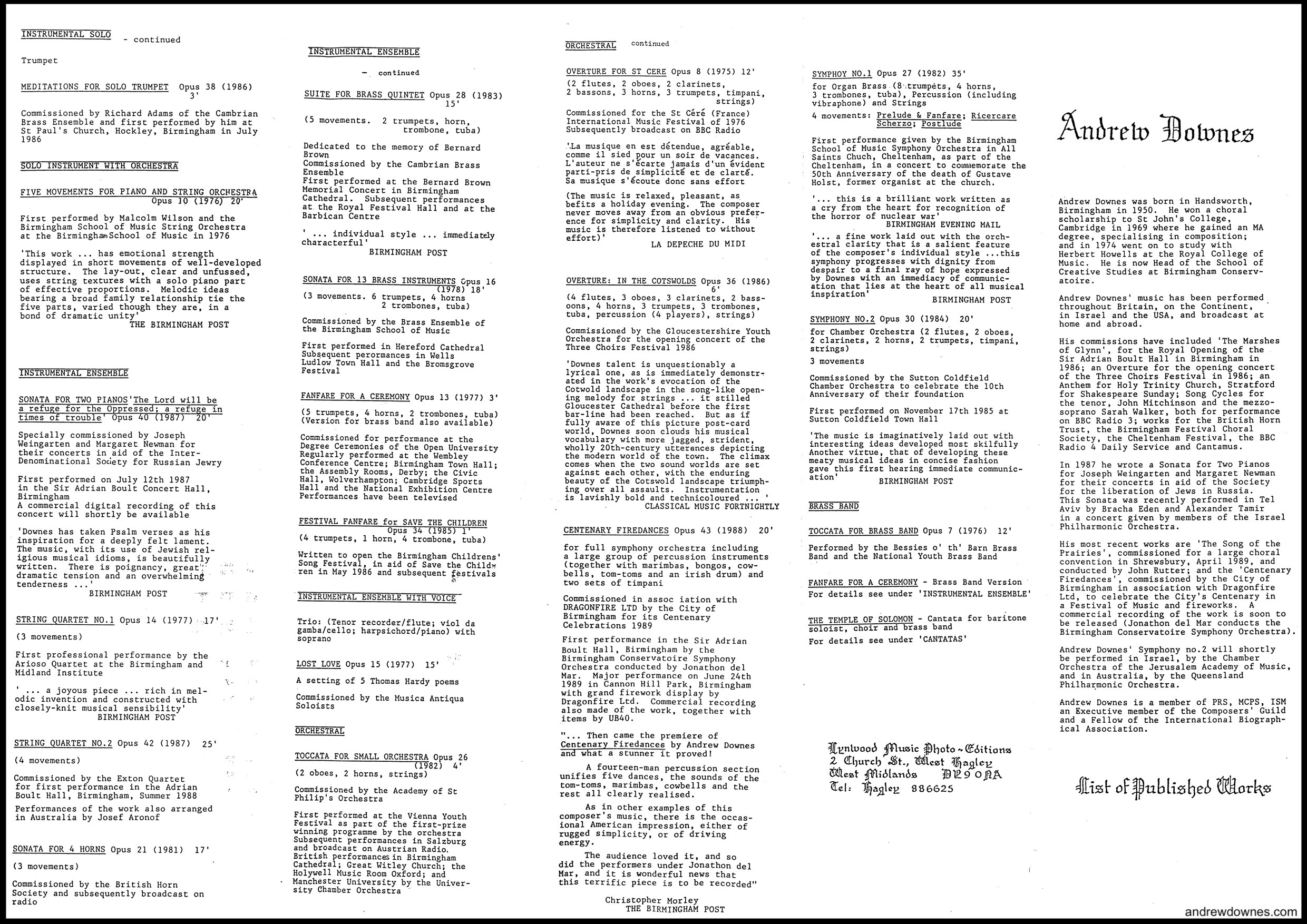 Later catologue of Andrew's works designed on a 'star writer' and using 'Lettraset': 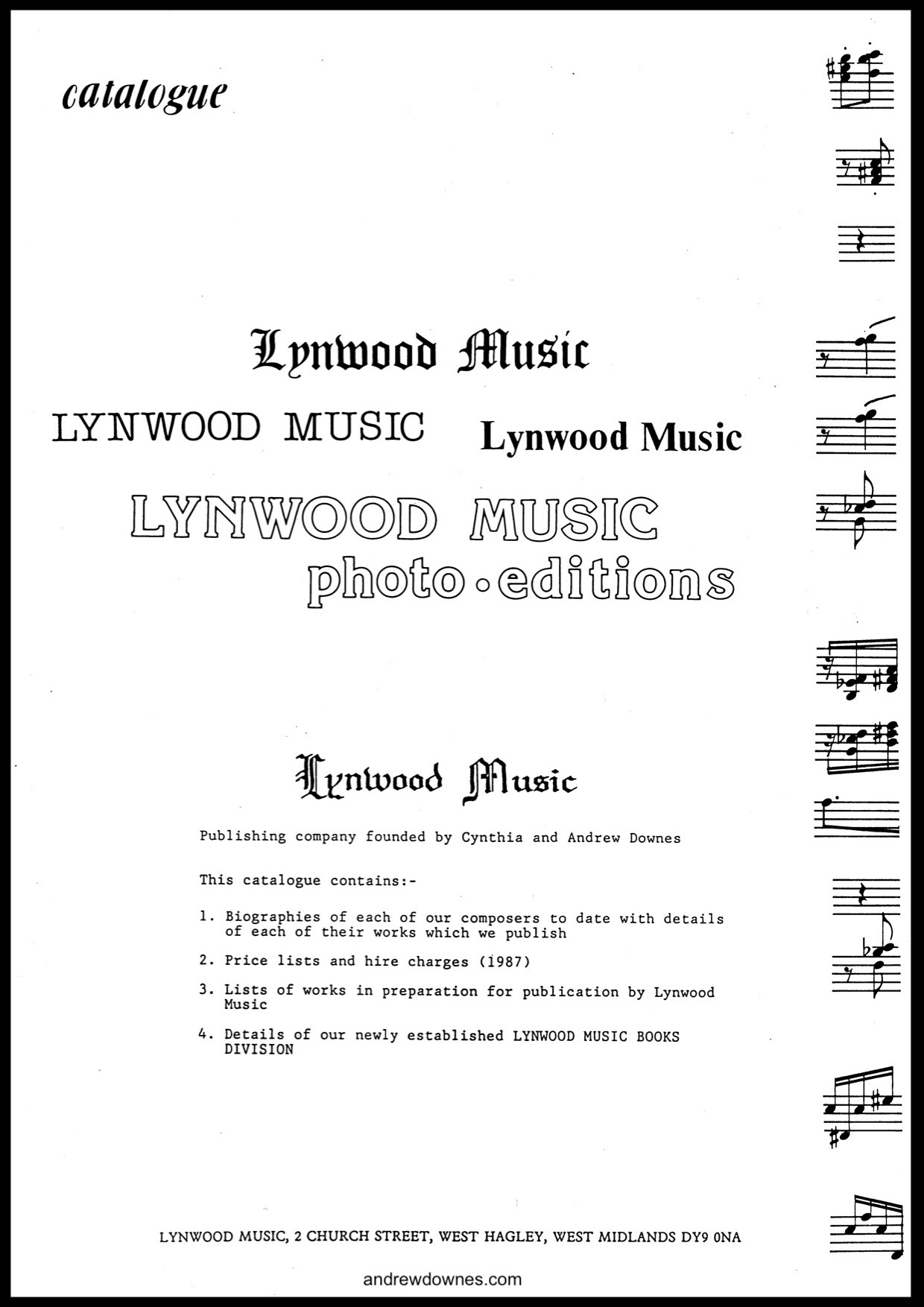 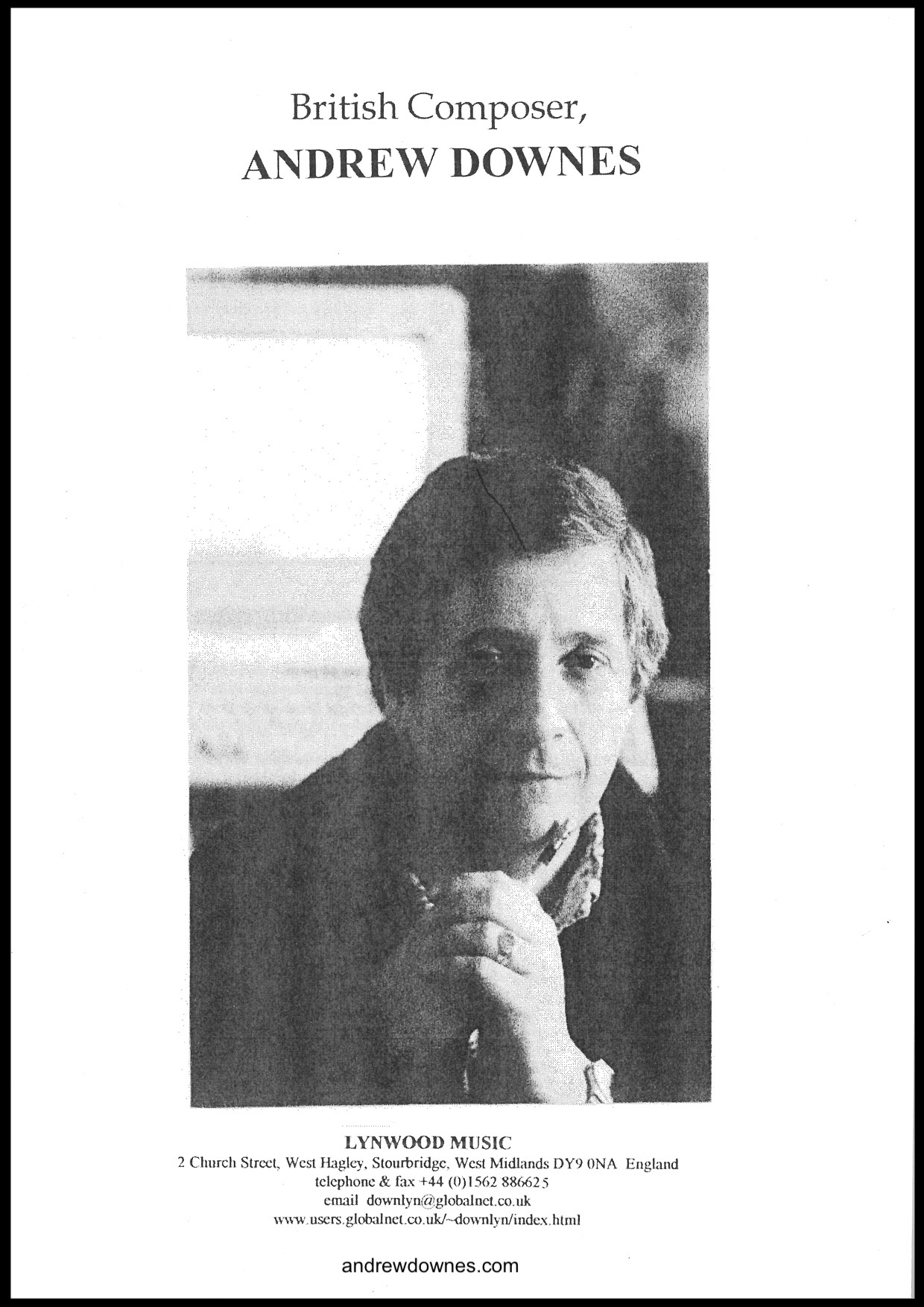 I built Andrew's website in 1999 (with a great deal of help and encouragement from our friend, Gerry Lowe), having up till then made the above brochures, which got ever bigger as Andrew wrote new works! 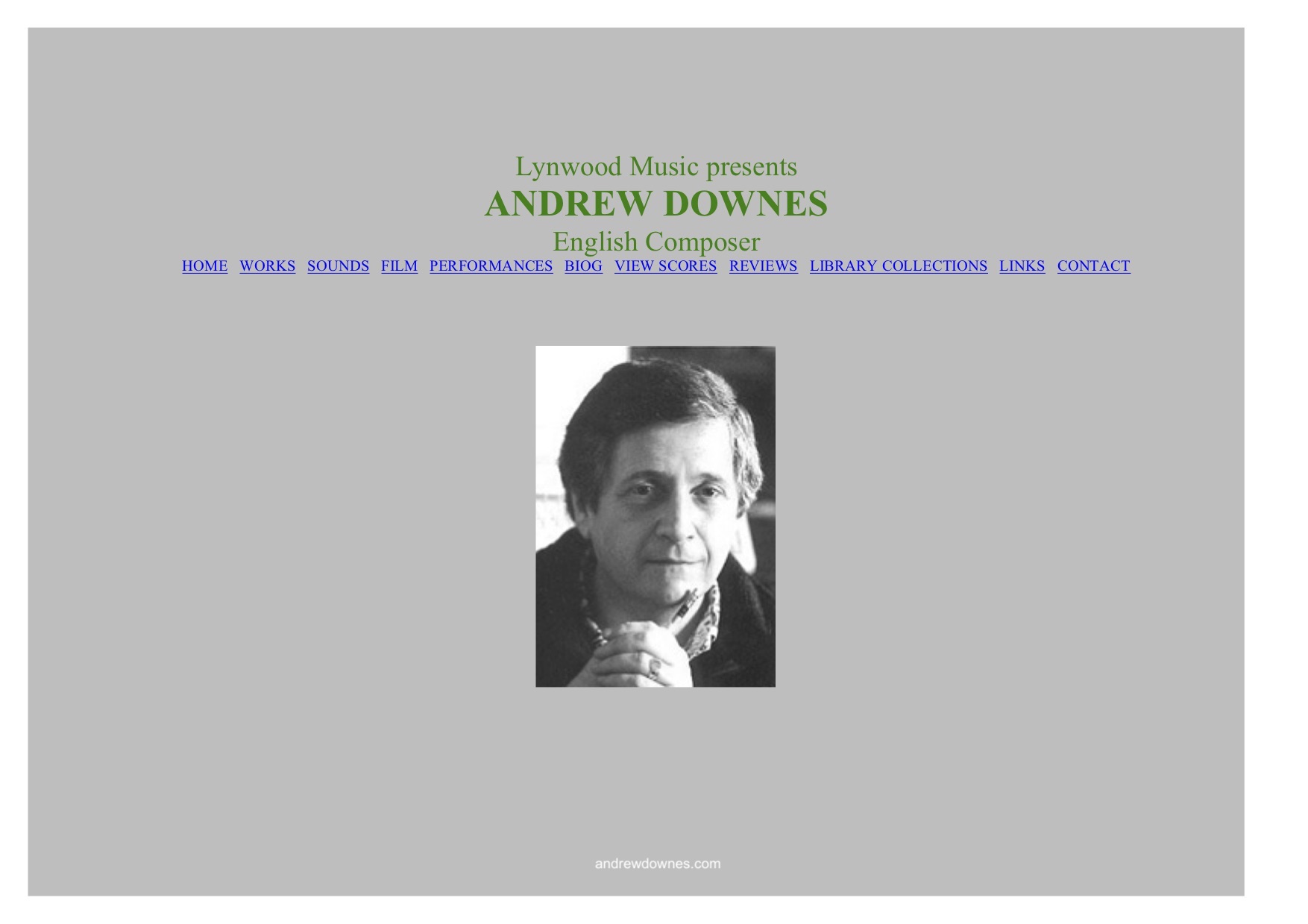 For a while we had an additional website, set up by Iain Masson, an ex-student of Andrew's, as a gift to express Iain's appreciation for all the help and encouragement Andrew had given him at Birmingham Conservatoire. Iain's website was very colourful, full of fun and brilliant for advertising Andrew's CDs and performances. Sadly the flash technology used went out of date.

Our daughter, Paula (who wasn't even born when we first set up Lynwood Music), took over the website side of the work in 2015, while she in turn was at home with her young children. She is an expert with computers and has been instrumental in taking Lynwood Music to new heights of refinement and elegance.  She is now Chief Executive of Lynwood Music, always coming up with fabulous new ideas for marketing and performances.

Her latest venture is her Andrew Downes, Music and Conversation podcast. 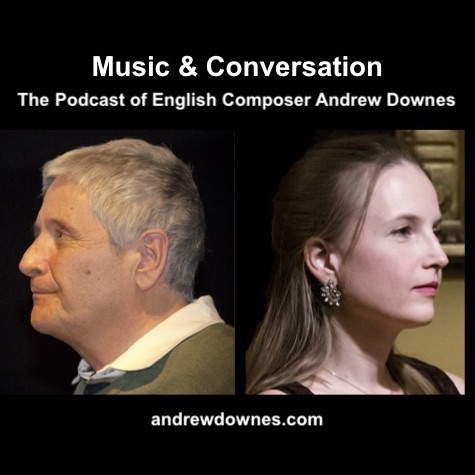 Both Anna and Paula have shared in the promotion of their Dad's works from a young age onwards. It's lovely having them on board!

I have mainly worked on my own on the production of Andrew's scores. When Anna and Paula were young, another mother, Lynn Brodie, came to help me with the photocopying.  Very unfortunately, however, Lynn fell ill and couldn't carry on, so I continued on my own.  In their teens our daughters Anna and Paula helped out and earned some pocket money!  Now we also have help, with typesetting, from our son-in-law's cousin, Paul Trippett.

So I never went back into classroom teaching!  It's been a busy life, because I took on pupils at home as well, teaching them French, German or Music. When Anna and Paula grew older, I also worked as a part time peripatetic violin teacher for Hereford and Worcestershire, for 9 years. With my various music groups I have performed a lot of Andrew's music, which has always been a delight to arrange.  Anna and Paula have also arranged a number of their Dad's works for the groups which they run, as has Lee Armstrong.

Faber publish O Vos Omnes by Andrew as part of their anthology 30 Sacred Masterworks for upper voice choir and the Royal College of Organists publish his Prelude: The Forest at Dawn in their Millennium Organ Book. Apart from that, all of the thousands of performers of Andrew's music all over the world to date have used scores and parts produced by me at Lynwood Music!

Back to Cynthia's Blog