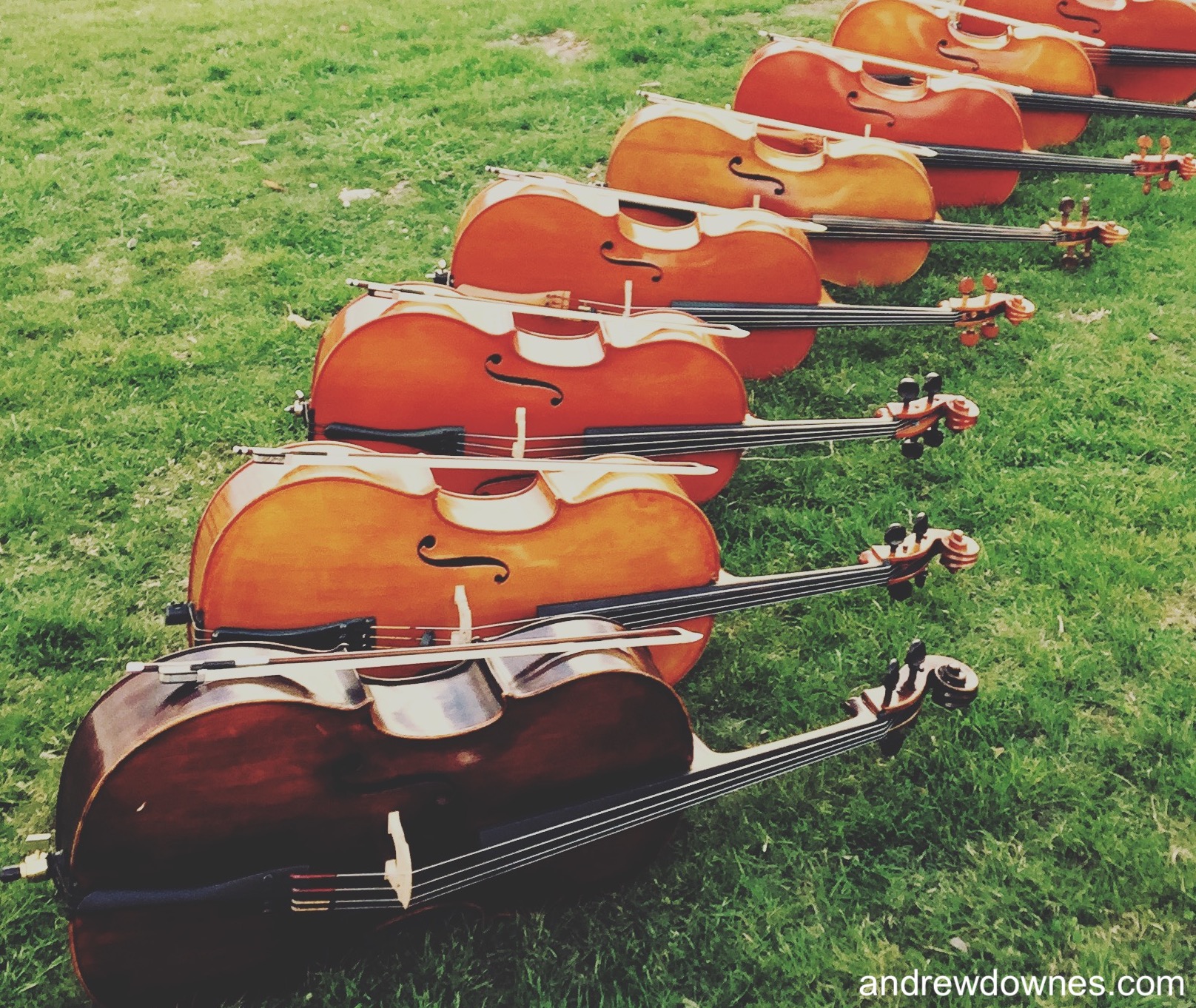 An account by Andrew's wife and publisher, Cynthia Downes, posted on January 30th, 2022

Andrew’s father, Frank Downes, was a professional horn player, who had played in the RAF Central Band during the war, then with Sadler’s Wells, the CBSO, the Liverpool Philharmonic Orchestra, and, to be closer to home for his growing family, the BBC Midland Light Orchestra.  As a teenager, Andrew used to like going to the BBC studio with his Dad and follow the scores which they were playing. 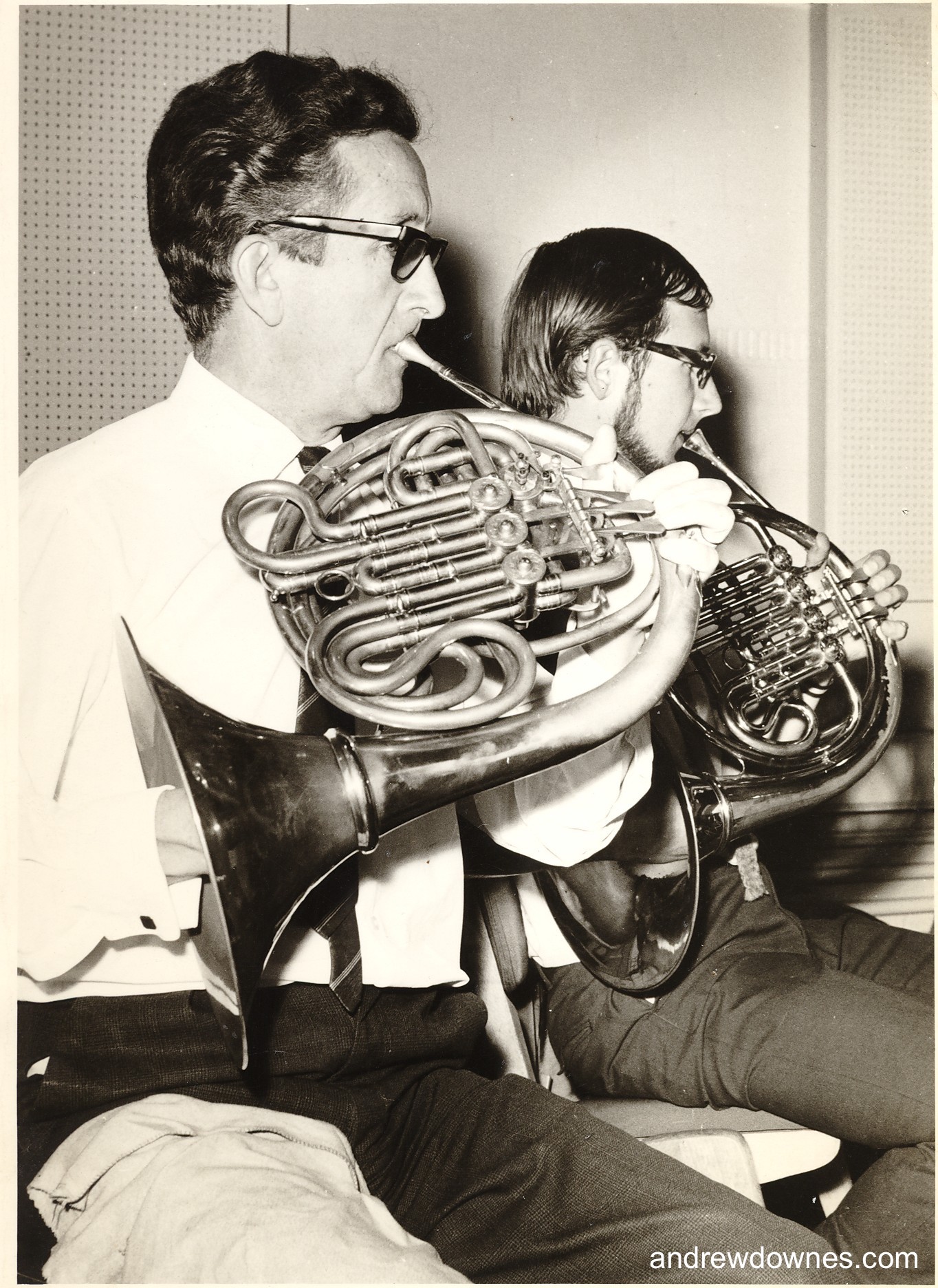 When he was 18 Andrew wrote a work for the cello section and the timpanist of the orchestra: his Music for 8 Cellos and 5 Timpani.  He took it along to the orchestra and the cellists and timpanists played it.  The players were very impressed and complimentary.

This was another of Andrew’s Works which was written out by hand in blue biro and so lay in our trunk until I typeset it.

In April 2001 we went to Paris, where Andrew’s music was to be played at the Conservatoire National de Région d’Aubervilliers.  Paula came with us to perform Andrew’s Songs from Spoon River with accompanist Laura Temim.  We took two days to get to Paris, stopping off at Beauvais, because of its connections with Jean Racine, whose works I had studied at University.  While we were there we saw a lot of publicity for a cello festival and L’Octuor de Violoncelles (‘The Cello Octet’).  I immediately thought of Andrew’s work.  It was then that I set about typesetting it and wrote to L’Octour de Vionloncelles in my best French, telling them about Andrew’s piece.  They wrote back and said they would be very happy to try it.  I duly sent copies, and shortly afterwards they wrote to say it would be included in their Festival in 2005.  The Octet was to be accompanied by the famous Percussions de Strasbourg.  We were thrilled!

Emails before the performance: 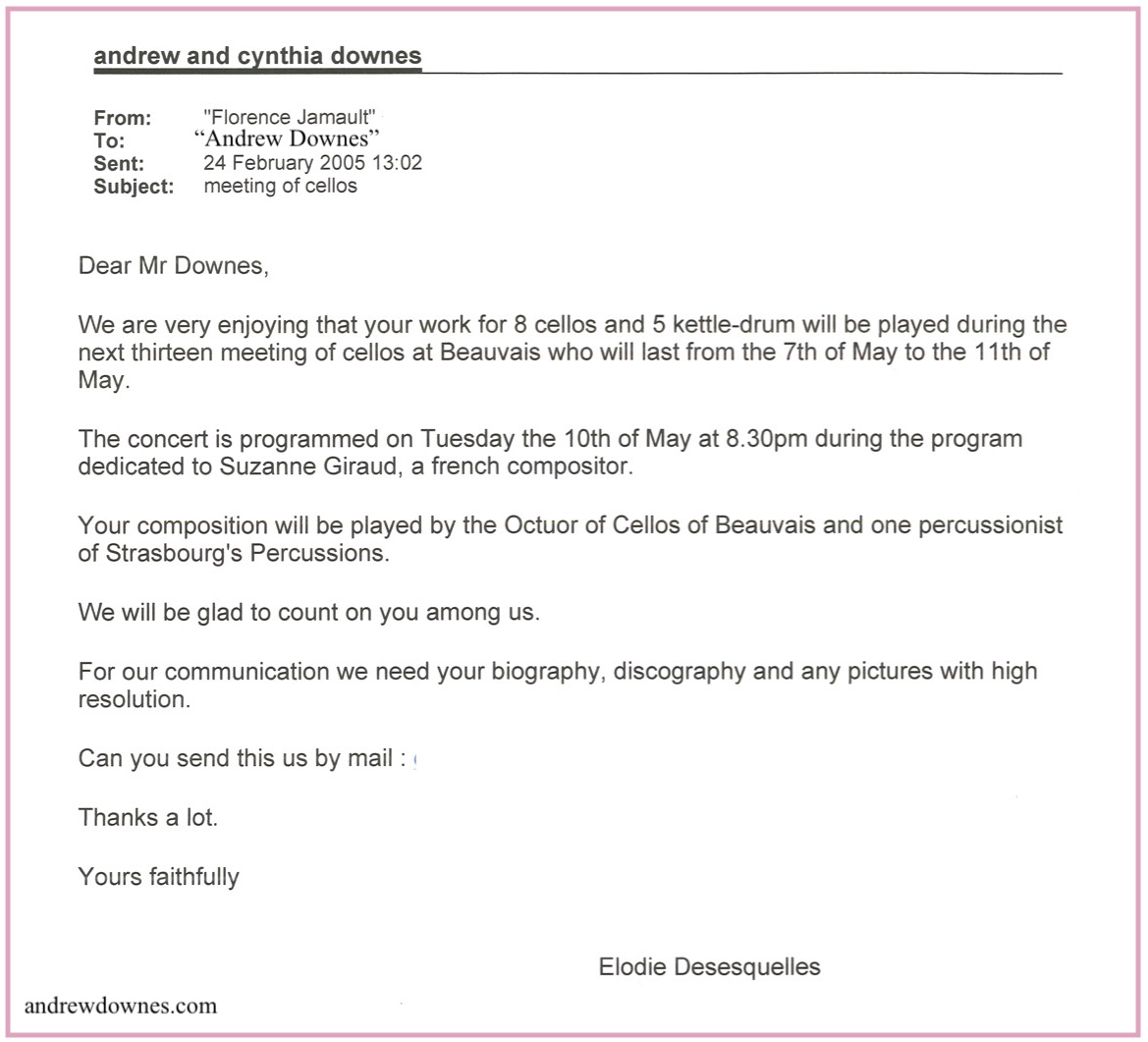 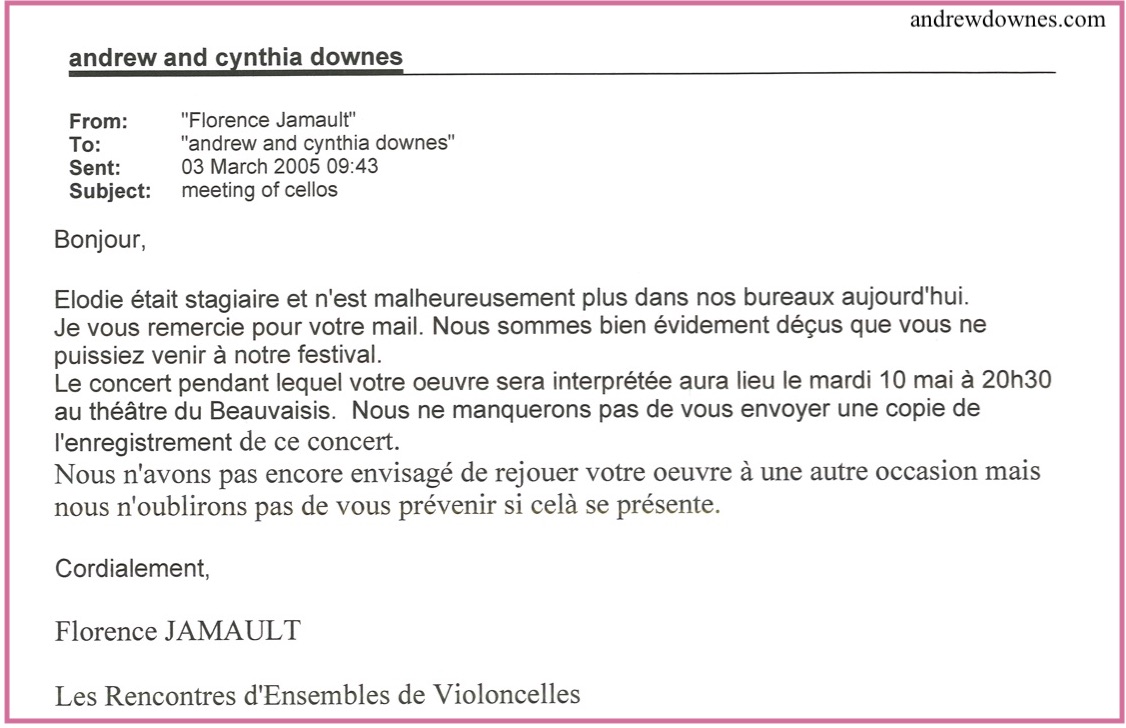 Translation of Florence JAMAULT's email:
Elodie was a trainee and is unfortunately no longer in our office today.  Thank you for your email.  We are obviously disappointed that you can't come to our festival.
The concert in which your work will be performed will take place on Tuesday May 10th at 8.30pm in Beauvaisis Theatre.  We will definitely send you a copy of the recording of this concert.
We don't have plans for a second performance at the moment, but we won't forget to inform you if the opportunity presents itself.
Yours,
Florence JAMAULT
Cello Ensemble Encounters 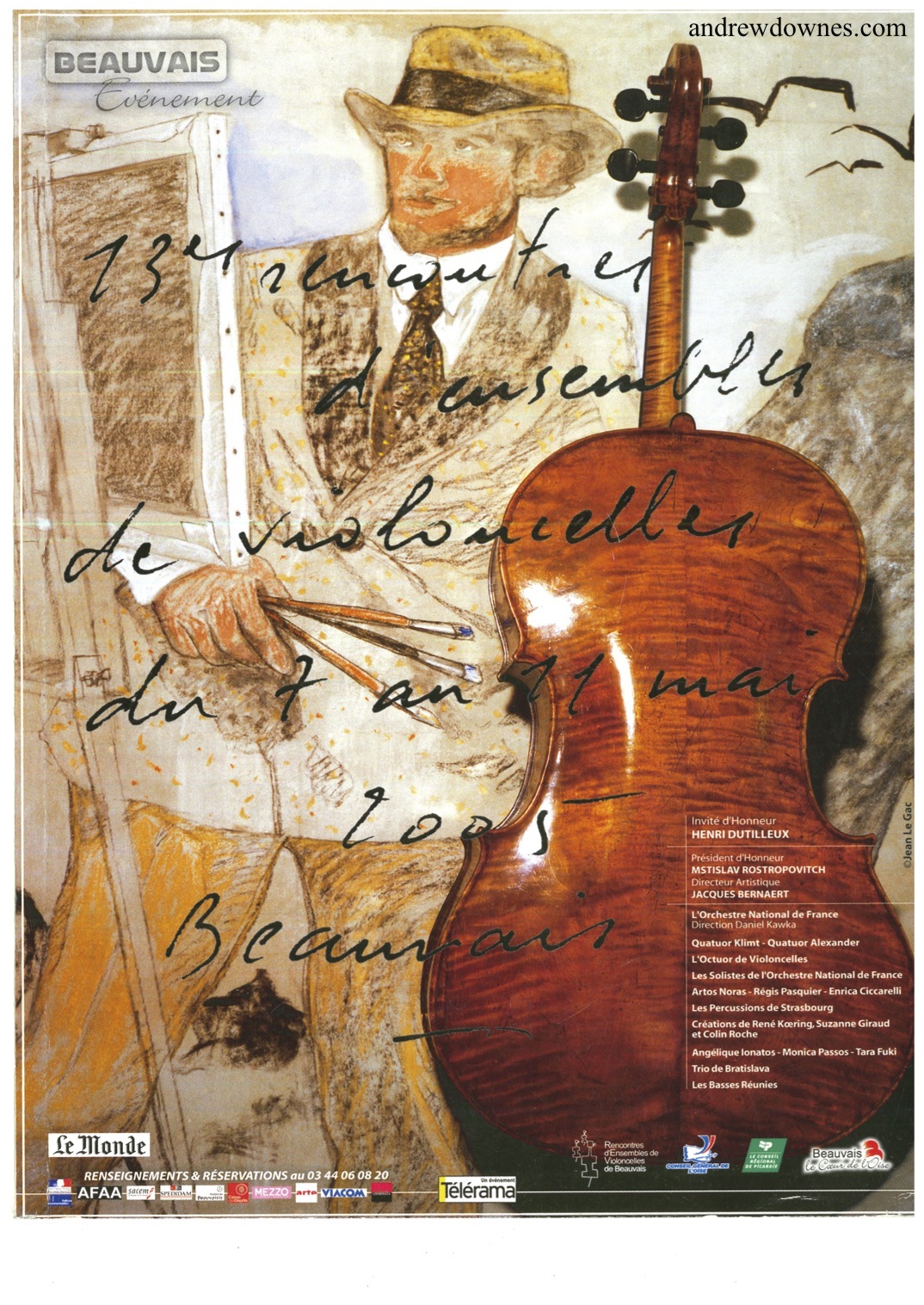 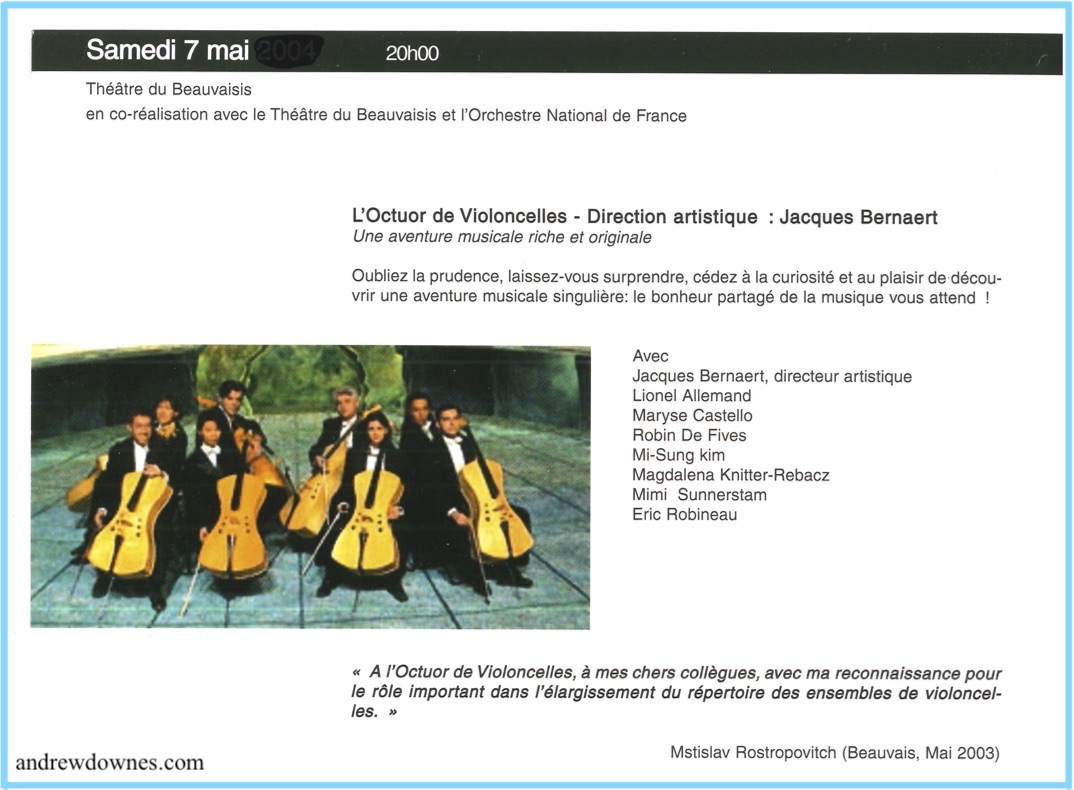 Beauvaisis Theatre and the National Orchestra of France

Forget your inhibitions, let yourself be surprised, yield to curiosity and to the pleasure of discovering an unusual musical adventure: the shared joy of music awaits you!

"To the Cello Octet, to my dear colleagues, with my recognition of your important role in the increase of the cello ensemble repertoire"
Mstislav Rostropovitch (Beauvais, May 2003) 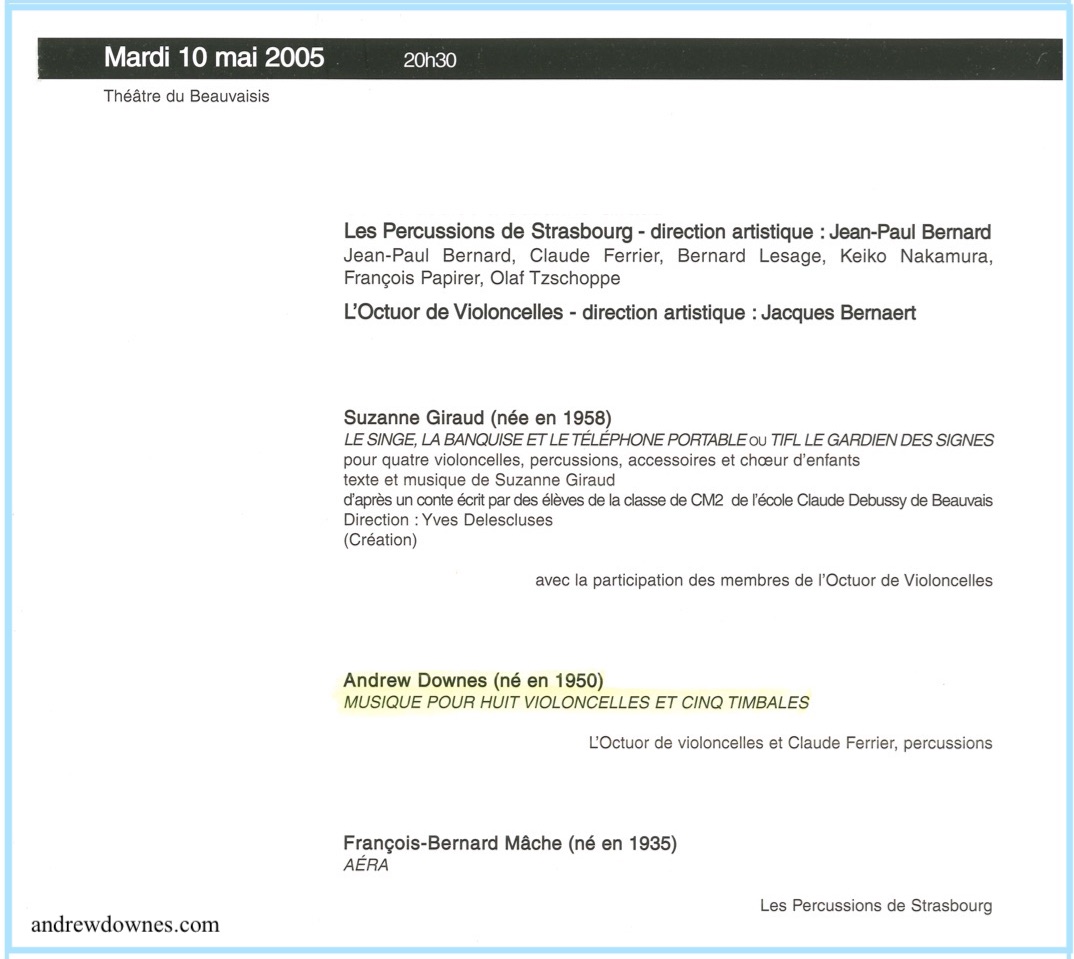 Translation of programme, first half:

Suzanne Giraud (b.1958)
THE MONKEY, THE BANK AND THE MOBILE PHONE or TIFL THE GUARDIAN OF THE MONKEYS for 4 cellos, pecussion, accessories and children's choir.  Text and music by Suzanne Giraud, based on a short story written by the pupils of class CM2 of Claude Debussy Primary School, Beauvais
with the parcipation of members of The Cello Octet 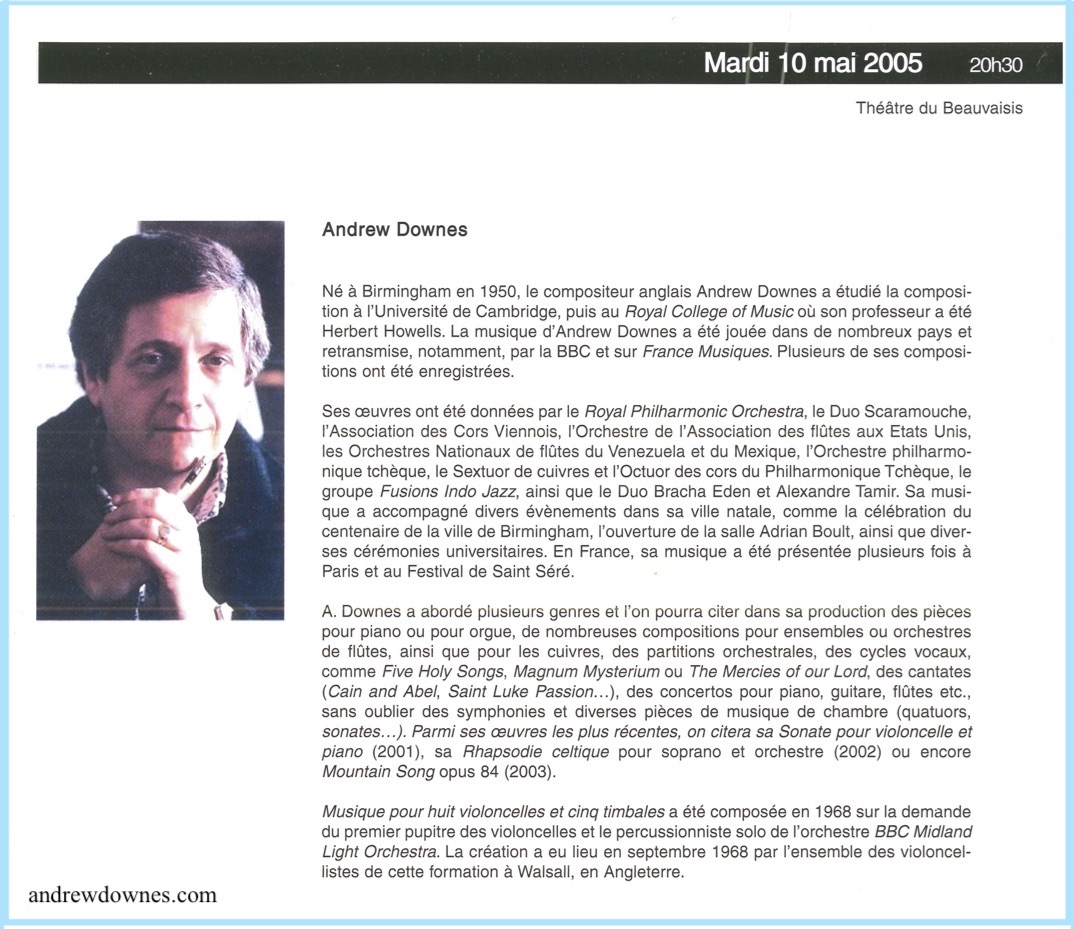 Translation of Andrew's biography:
Born in Birmingham in 1950, the English composer Andrew Downes studied composition at the University of Cambridge, then at the Royal College of Music where his teacher was Herbert Howells.  Andrew Downes' music has been performed in numerous countries and has been broadcast notably by the BBC and France Musique.  Many of his compositions have been recorded on CD.

Andrew Downes has composed for many instruments, for example piano, organ, many works for instrumental ensemble or flute orchestras, as well as brass ensembles, song cycles, eg Five Holy Songs, choral works such as O Magnum Mysterium or The Mercies of our Lord, cantatas (Cain and Abel, A Saint Luke Passion), concertos for piano, guitars, flutes etc, not forgetting his symphonies and various chamber music works (quartets, sonatas...).  Amongst his most recent works, one can cite his Sonata for Cello and Piano (2001), his Celtic Rhapsody for soprano and orchestra (2002), or his Mountain Song opus 84 (2003)

Music for 8 Cellos and 5 Timpani was composed in 1968 for the cellists and solo timpanist of the BBC Midland Light Orchestra in 1968.  They performed it in rehearsal in the BBC sudios in Birmingham, England, in September 1968.

We were unable to go to the performance in Beauvais, because it was during term time and exams at Birmingham Conservatoire, so the Octet sent us a recording.

Translation of note after the performance:
Dear Mr Downes,
Please find as promised a copy of the recording of the concert on 10th May, and one of our festival catalogues.
Yours sincerely
Mademoiselle Jamault 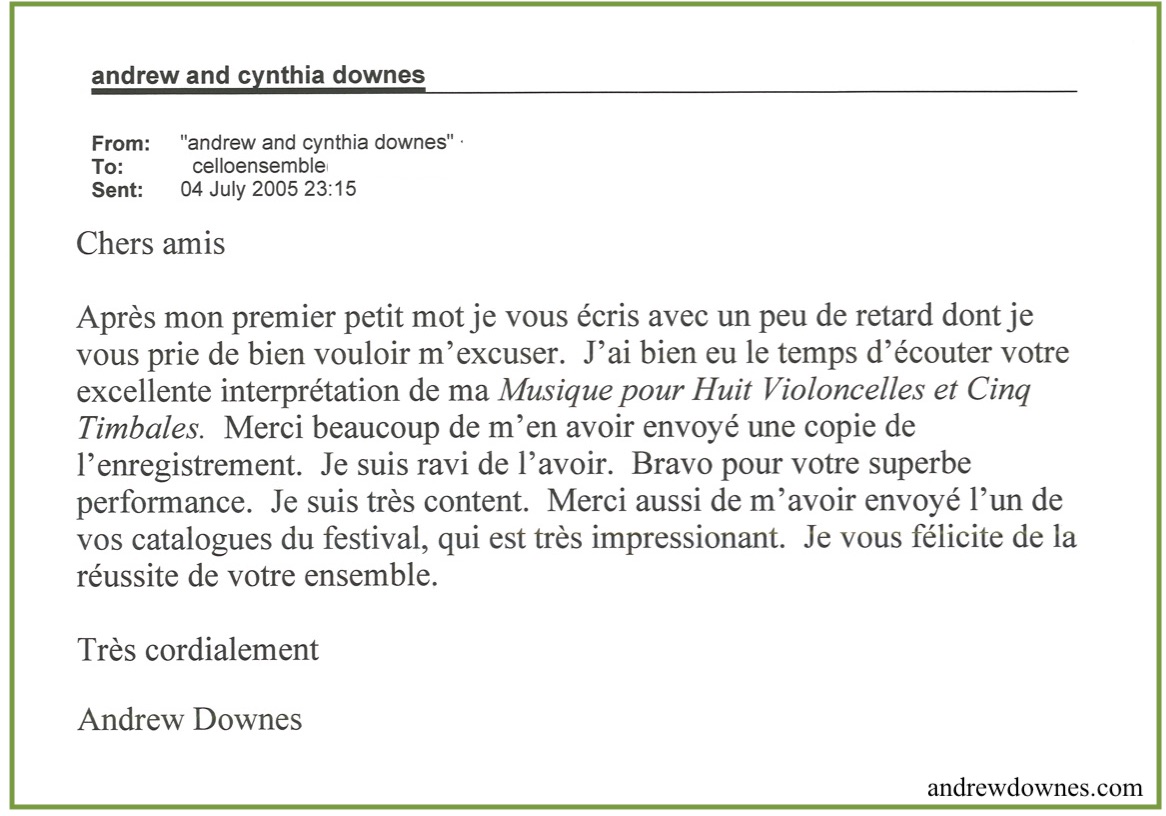 Translation back to English of my email, written on Andrew's behalf:
Dear Friends,
Following my first short note, I am a little late in writing to you, for which I do apologise.  I have now had time to listen to your excellent interpretation of my Music for 8 Cellos and 5 Timpani.  Thank you very much for sending me a copy of the recording.  I am thrilled to have it.  Bravo for your superb performance.  I am very pleased.  Thank you also for sending me a copy of your festival catalogue, which is very impressive.  I congratulate you on the success of your ensemble.
Very best wishes,
Andrew Downes