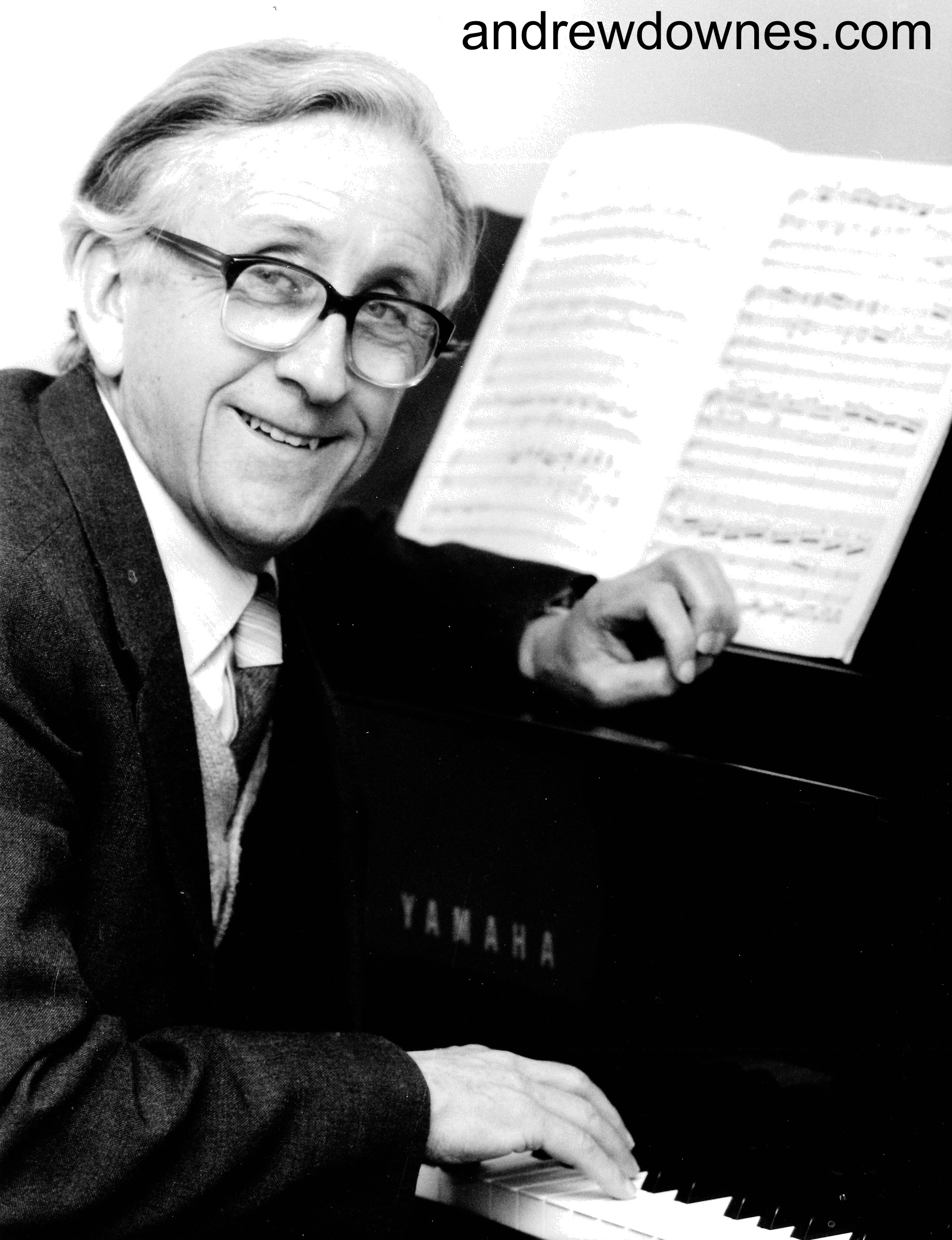 An account by his wife and publisher, Cynthia Downes, posted on July 6th, 2018

Andrew's late father, Frank Downes, who was Head of Orchestral Music at the Birmingham School of Music (now Royal Birmingham Conservatoire) from the early 1970s until 1986, directed the Birmingham School of Music Brass Ensemble. The late Donald Burrows, Music Professor at the Open University, knew Frank and Andrew very well. Donald was looking for an opening fanfare for the Degree Ceremonies of the Open University and asked Andrew to compose one. Thus Fanfare for a Ceremony, for 5 trumpets, 4 horns, 2 trombones and 1 tuba, was born. Here is a snippet:

For a number of years until his retirement, Frank went round the whole of the UK with the BSM Brass Ensemble performing at OU Degree Ceremonies and playing Andrew's Fanfare for a Ceremony.  Knowing I had become Andrew's archivist, Frank brought back many programmes for me to add to Andrew's memorabilia. 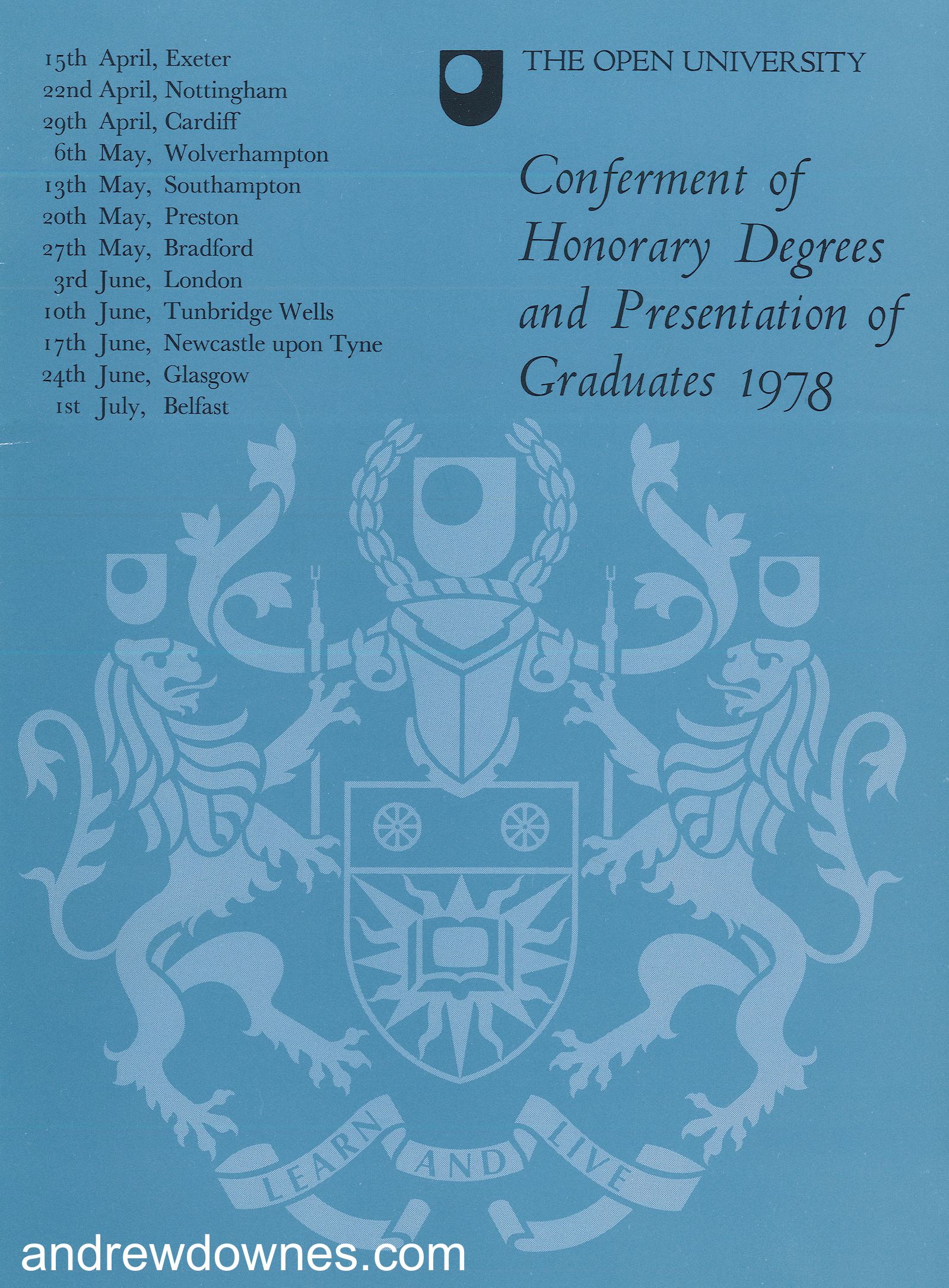 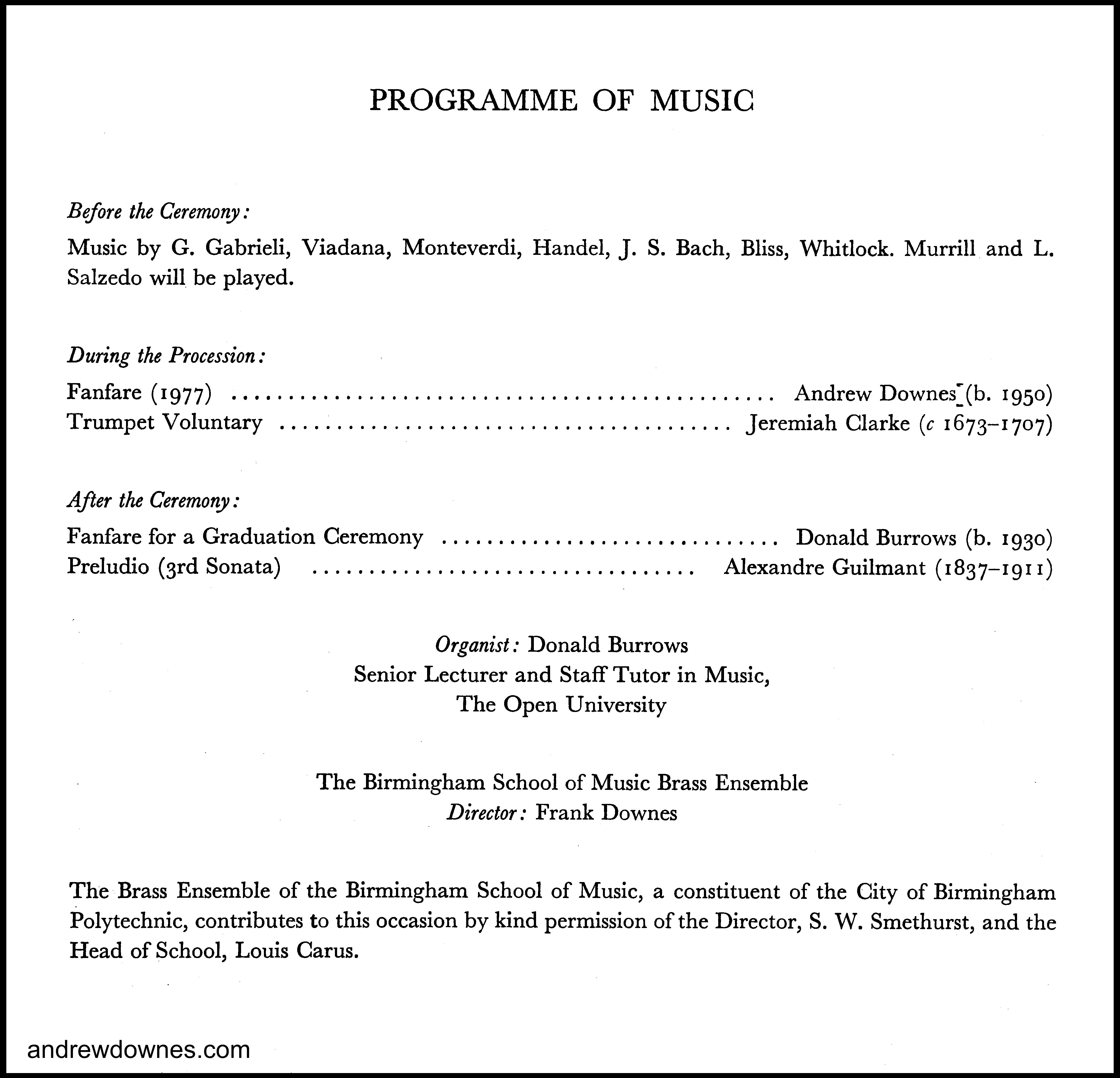 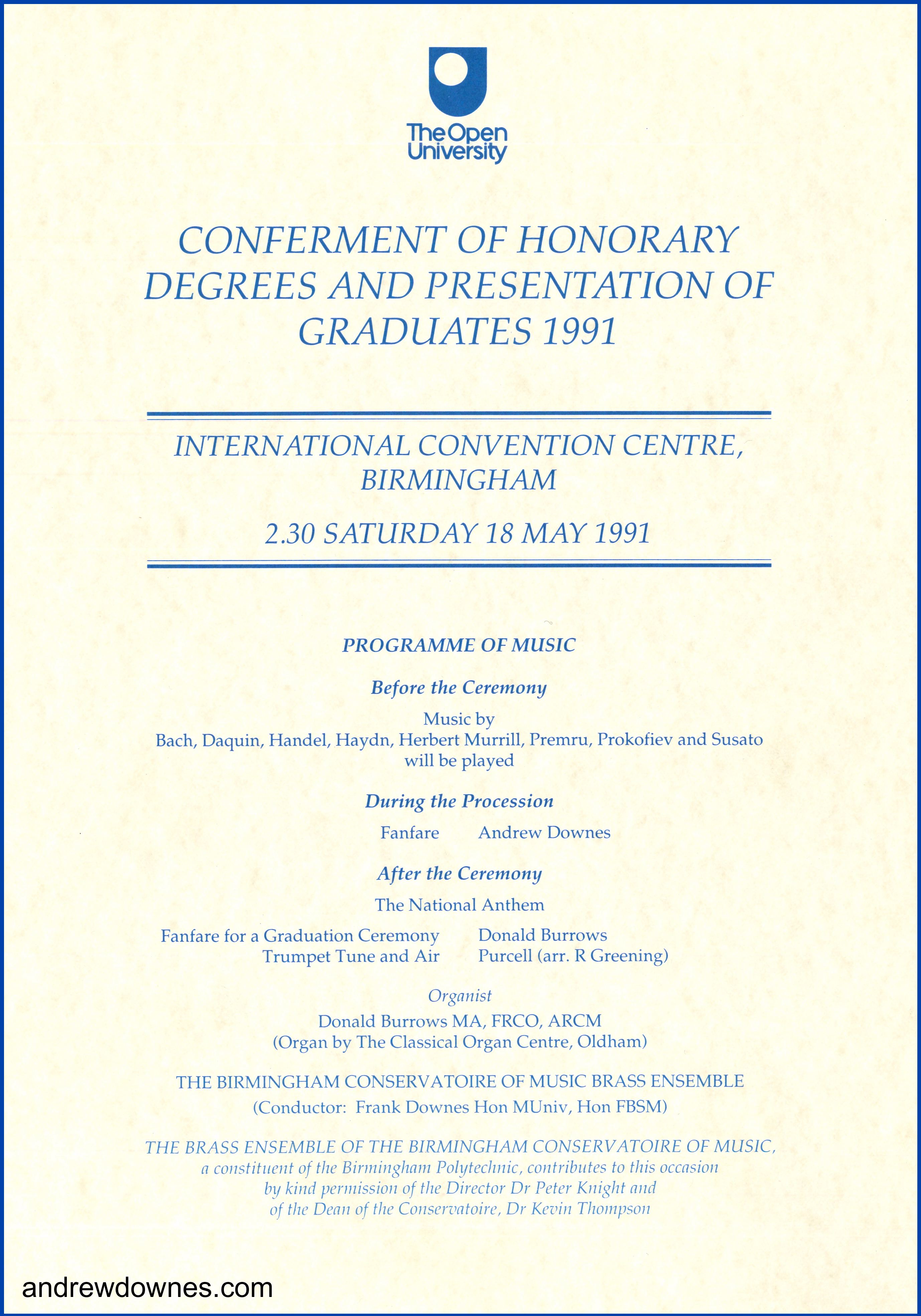 The Brass Ensemble, directed by Frank Downes, also performed the work at many Birmingham Conservatoire and Birmingham Polytechnic Degree Ceremonies.

In June 1981 they performed the Fanfare at the unveiling of a statue of Edward Elgar in Worcester and in 1982 gave performances at the Conservatoire of Lyon, France.

After Frank's retirement, Reg Reid took over the direction of the Brass Ensemble and the OU performances. In January 1995 they played the work at the Royal Opening by Prince Edward of the New Wing at Birmingham Conservatoire. Prince Edward was presented with a leather bound copy of the score of the Fanfare for a Ceremony. 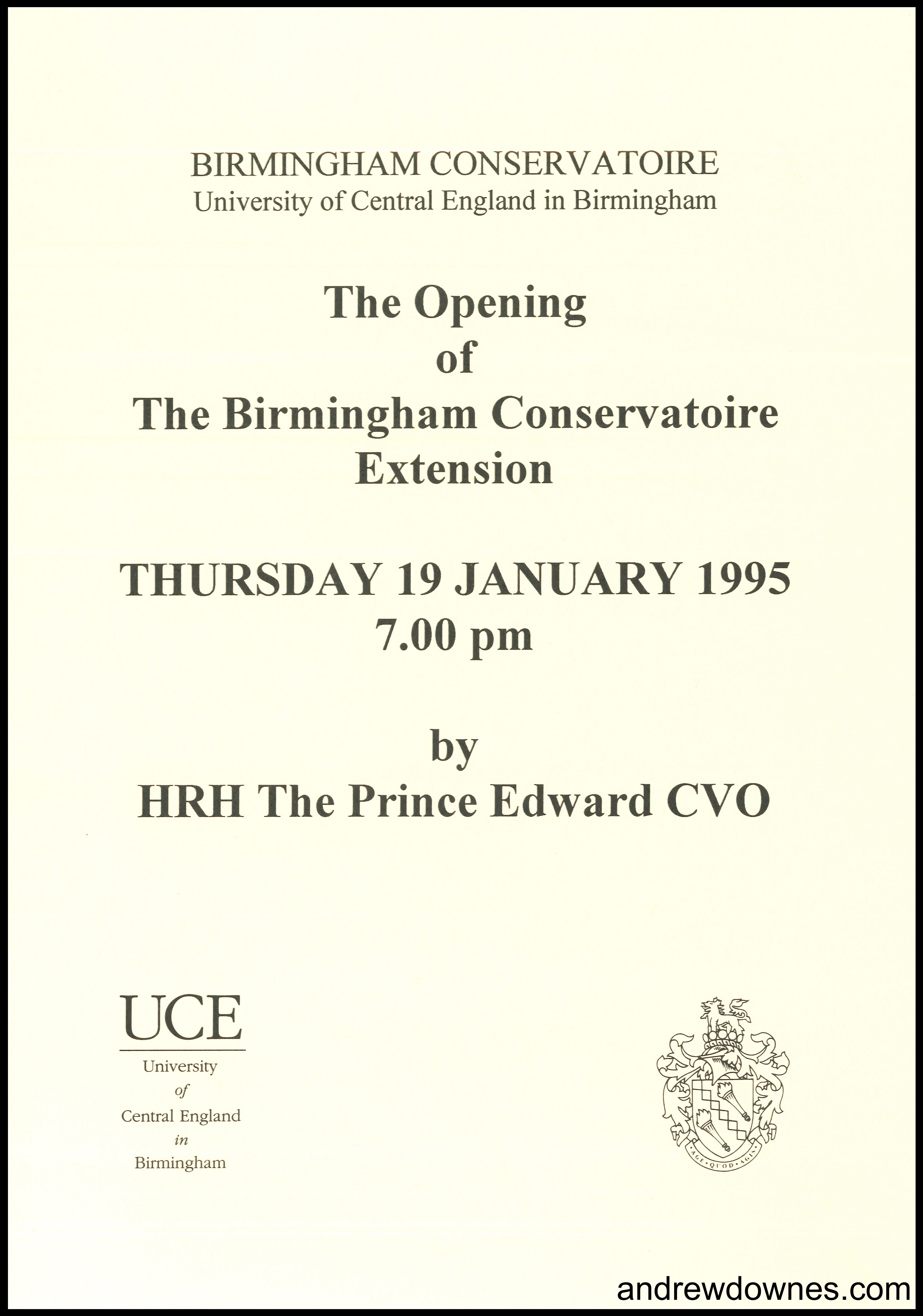 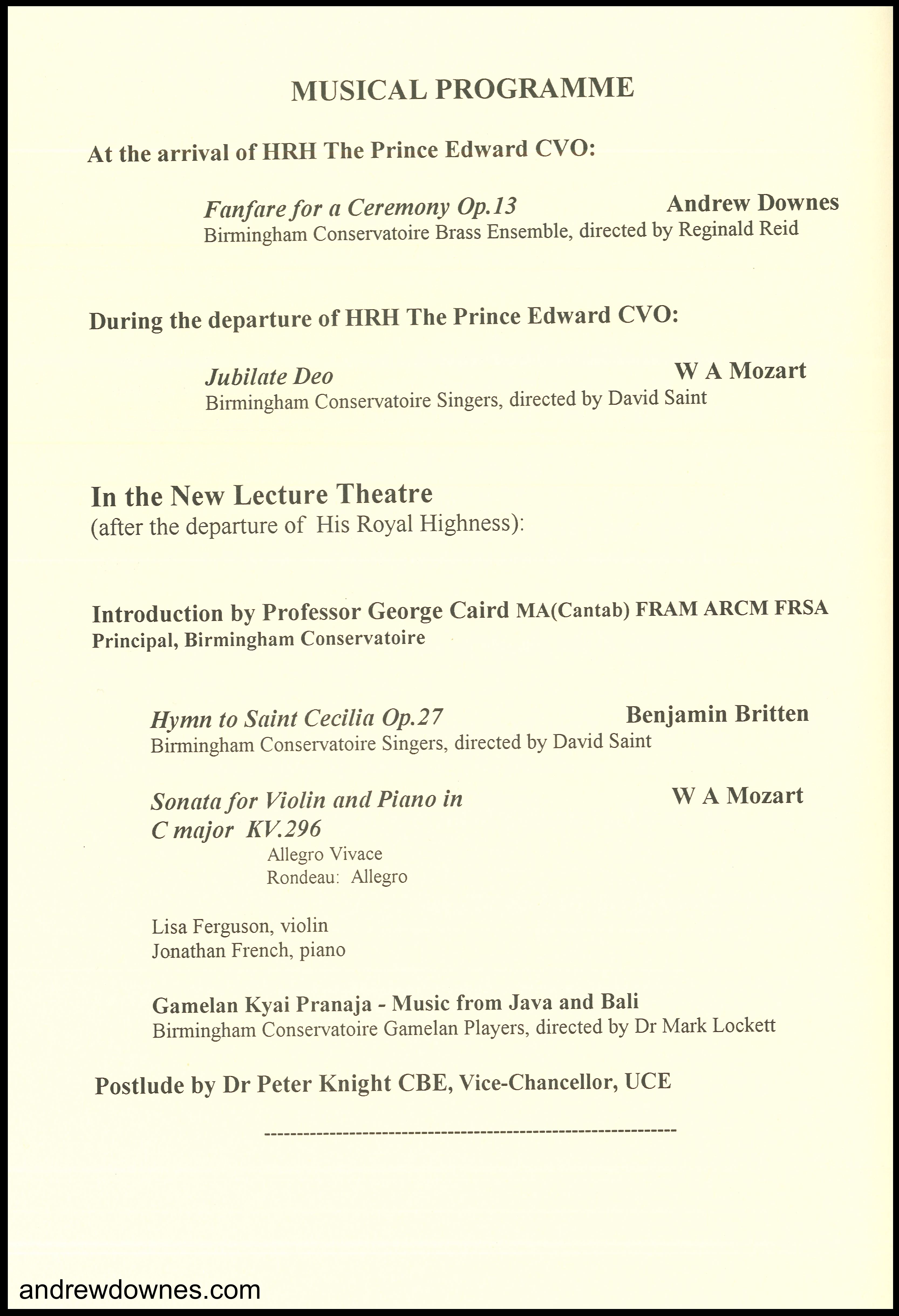 Since Reg Reid's retirement, the work has been played at many OU Ceremonies on the organ by Marcus Huxley and Paul Carr.

In 2016 our daughter, Anna, with her Central England Camerata, directed by Anthony Bradbury, organised a 65th Birthday concert for Andrew in Birmingham Cathedral and chose this Fanfare for the opening work. 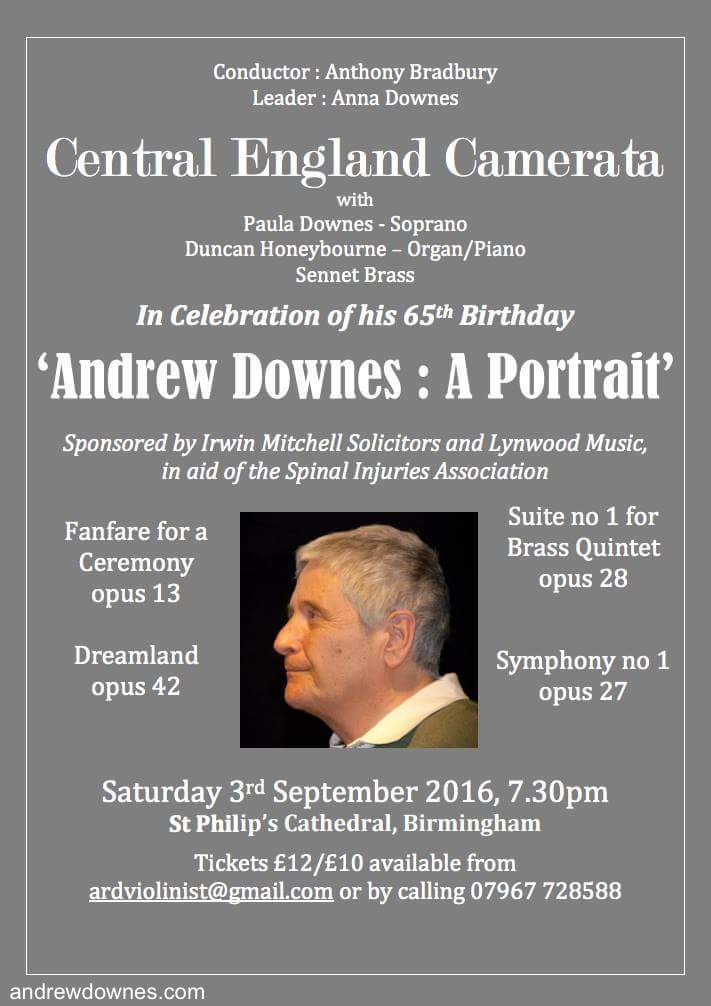 In the 1980s Andrew was asked by Save the Children in Birmingham to host and judge a children's song competition at the Birmingham School of Music (now Royal Birmingham Conservatoire), to raise funds for the charity. A lot of songs composed and performed by Birmingham school children were recorded and sent on cassette tapes to our house. Andrew invited a group of musicians, including me, to choose the ones which would be performed in the final of the song competition in the Adrian Boult Hall. Andrew wrote his Festival Fanfare for Save the Children to open the Festival, to be played by Gemini Brass on May 10th 1986. 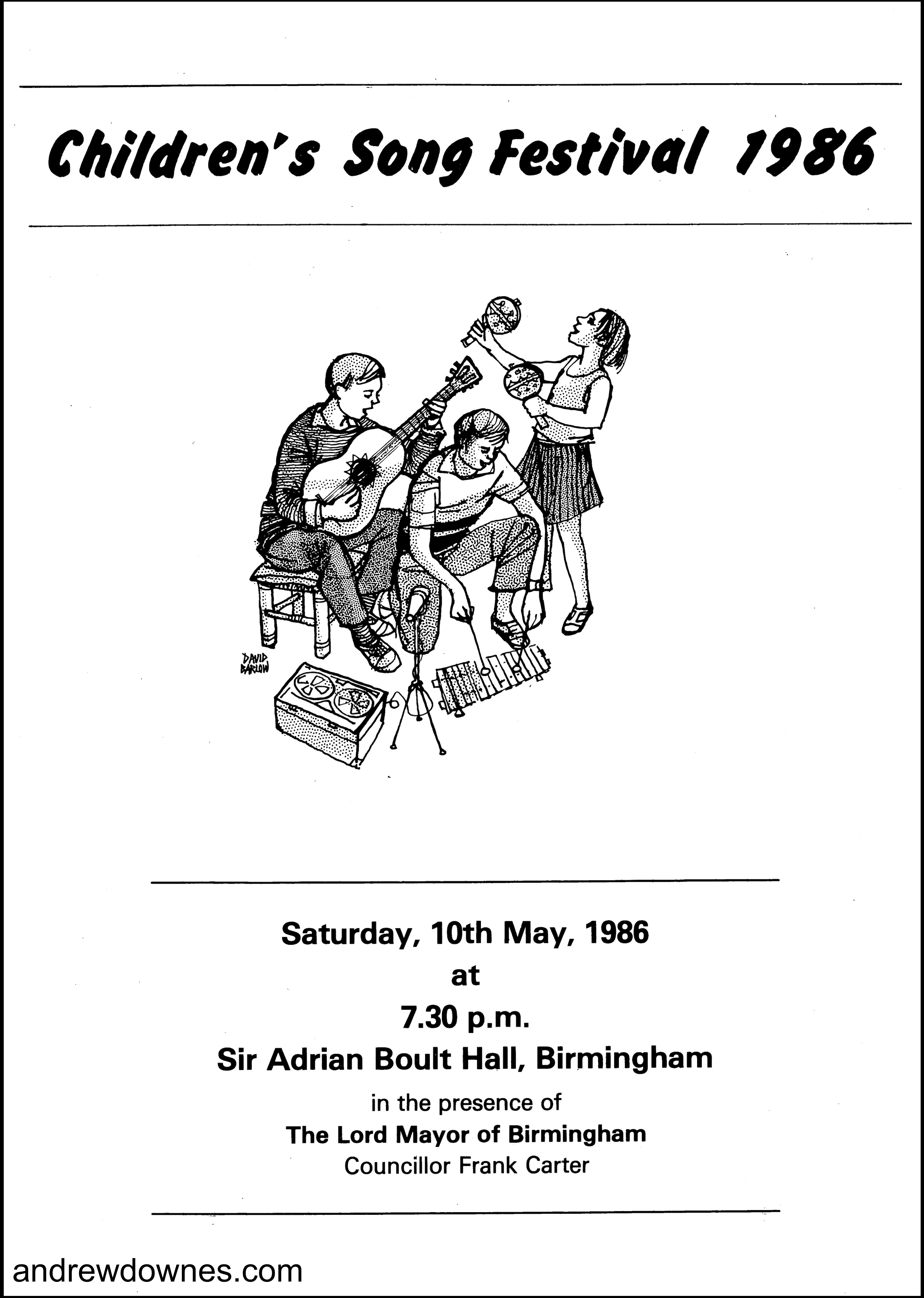 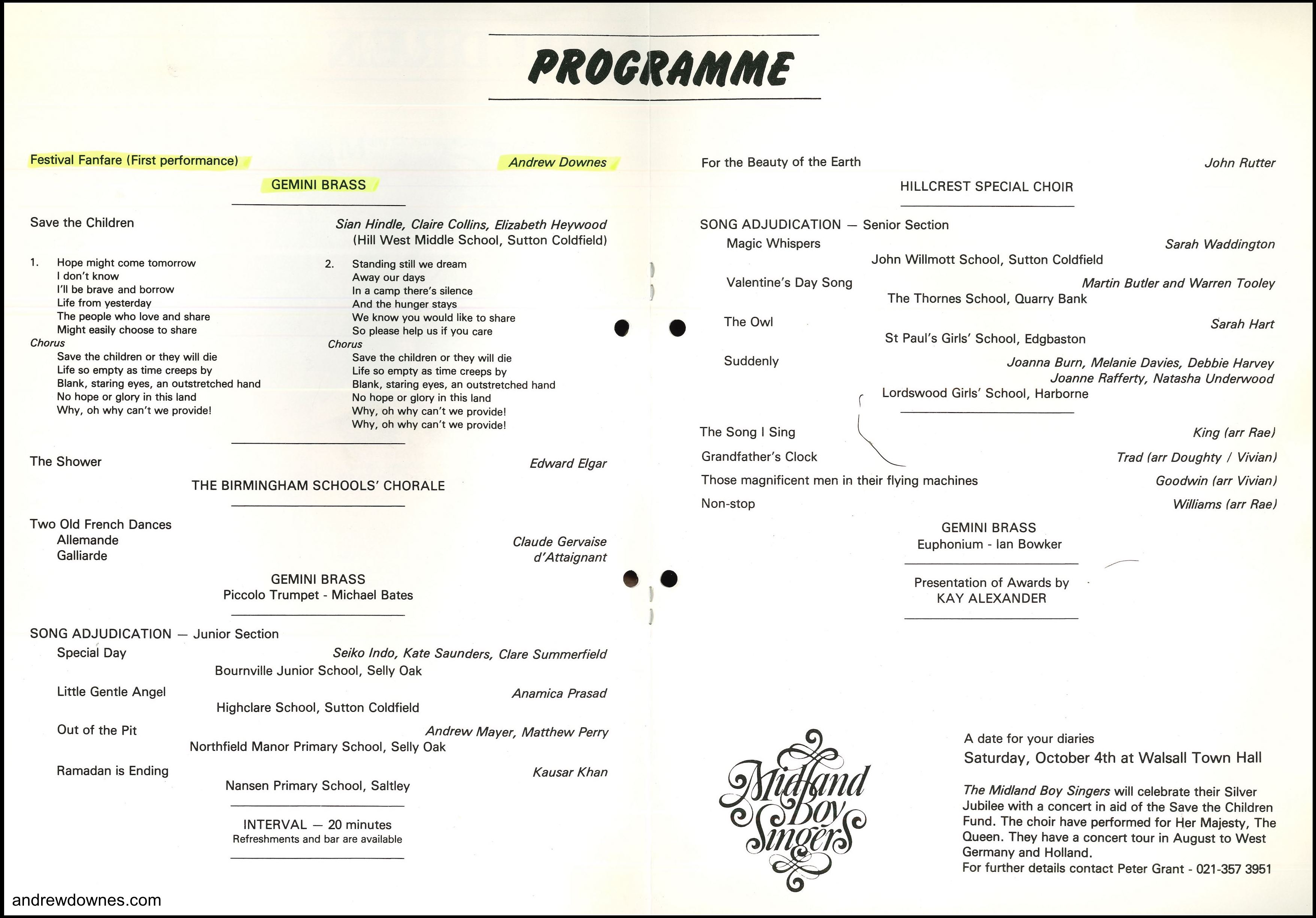 Due to the success of the Festival, two more were organised. Gemini Brass played the Fanfare in the second in 1987 and the Birmingham School of Music Brass Ensemble in the third in 1988.

In 1995 the Right Honourable Betty Boothroyd, Speaker of the House of Commons, became Chancellor of the Open University.  Andrew was commissioned to compose a special Fanfare for her Installation Ceremony. He wrote another stunning work, Fanfare for Madame Speaker, for 6 trumpets, 2 horns, 3 trombones and tuba, to be played by the Birmingham Conservatoire Brass Ensemble, conducted by Frank Downes. 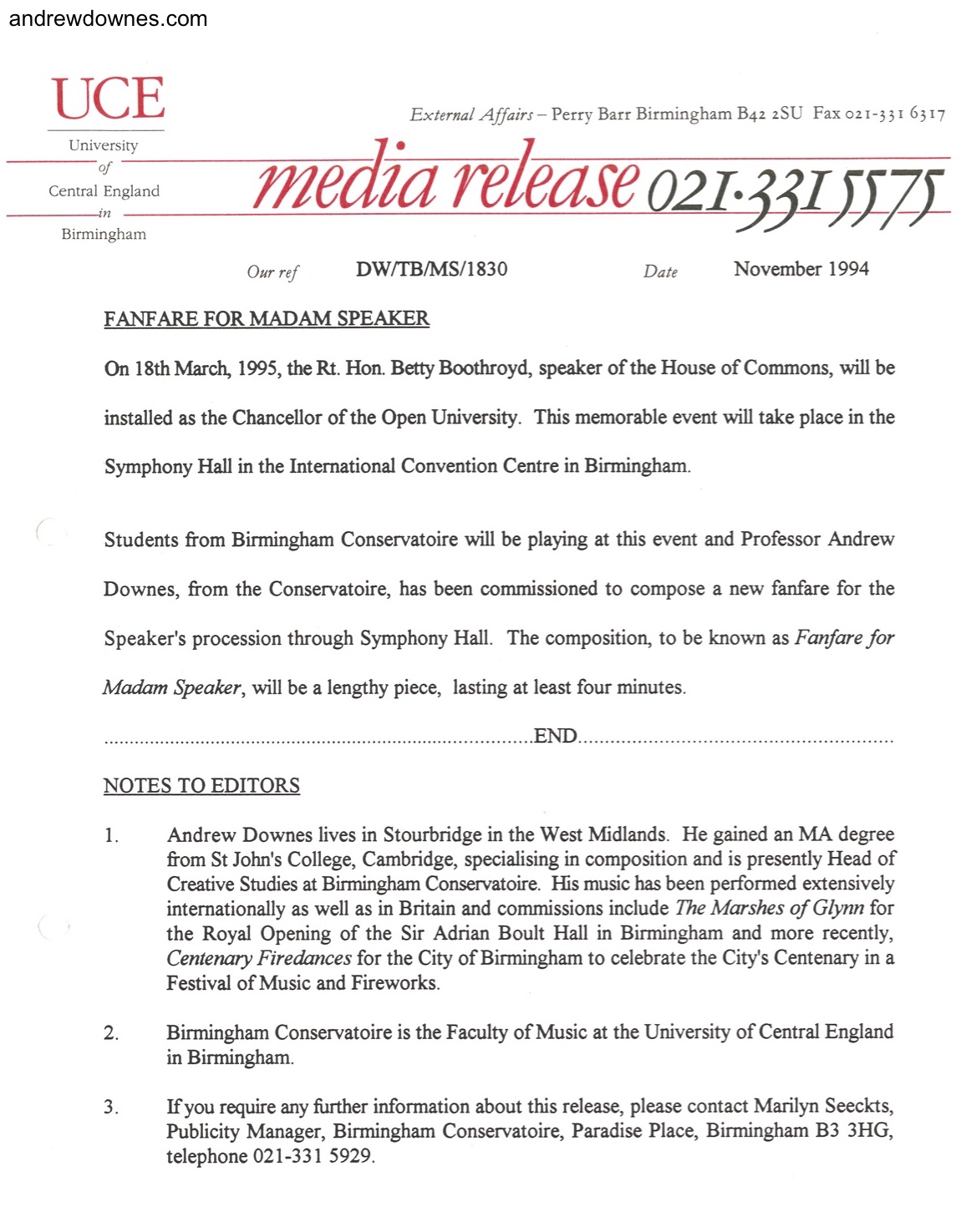 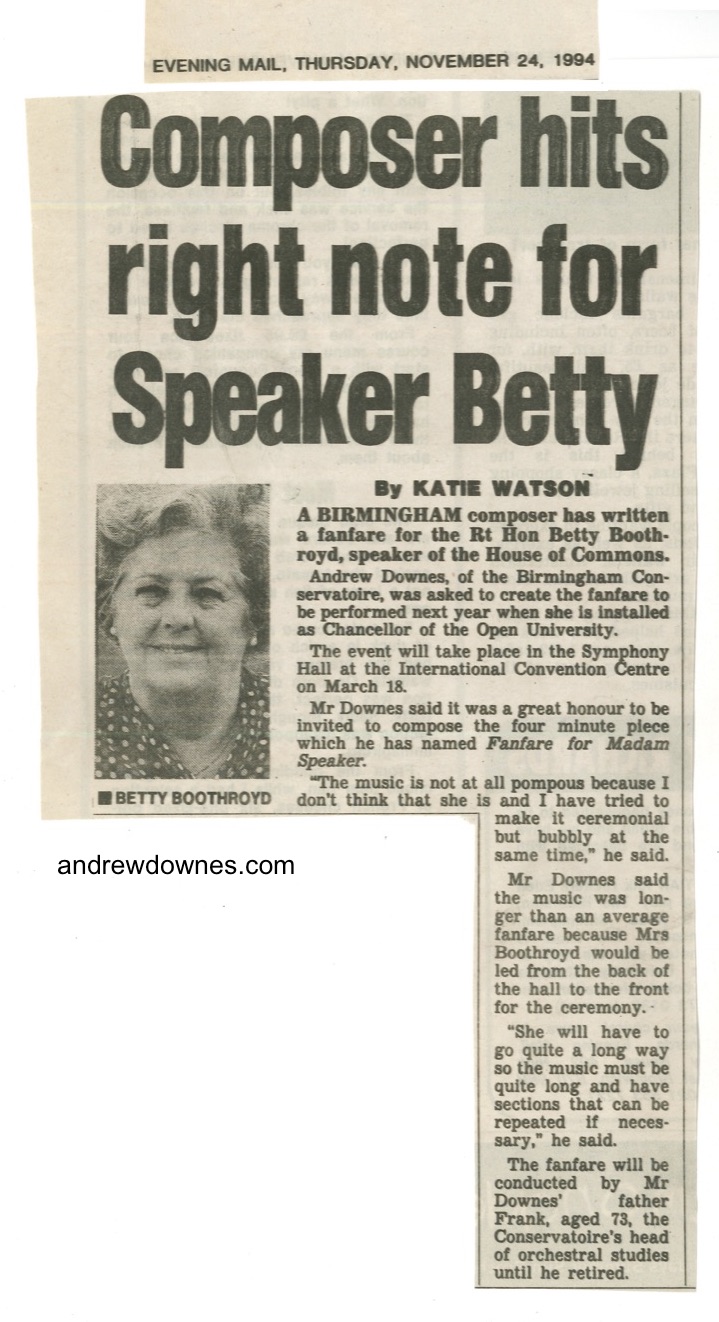 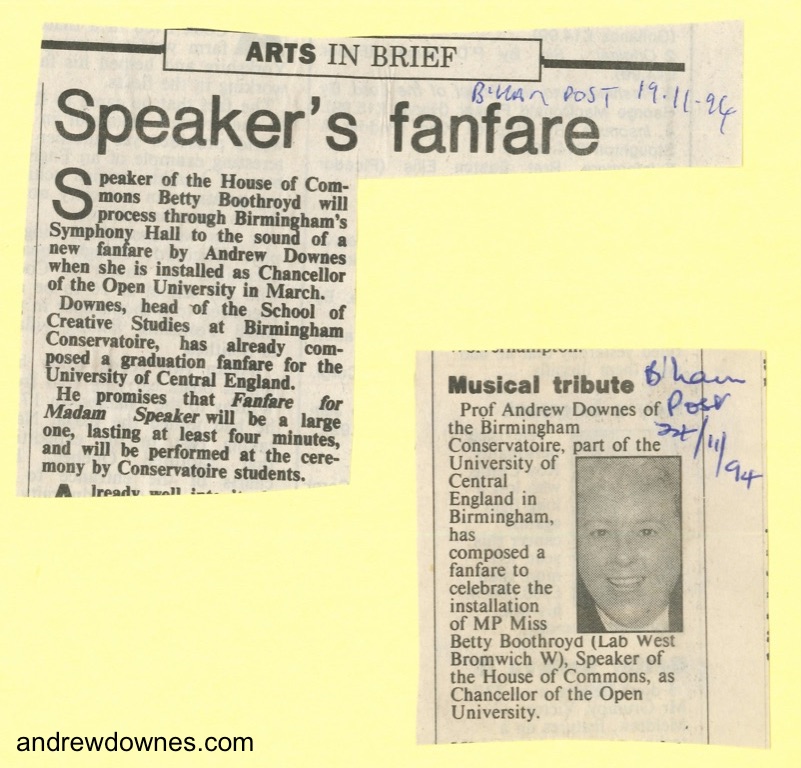 The Right Honourable Betty Boothroyd, Speaker of the House of Commons, becoming Chancellor of the Open University, Symphony Hall Birmingham, 1995 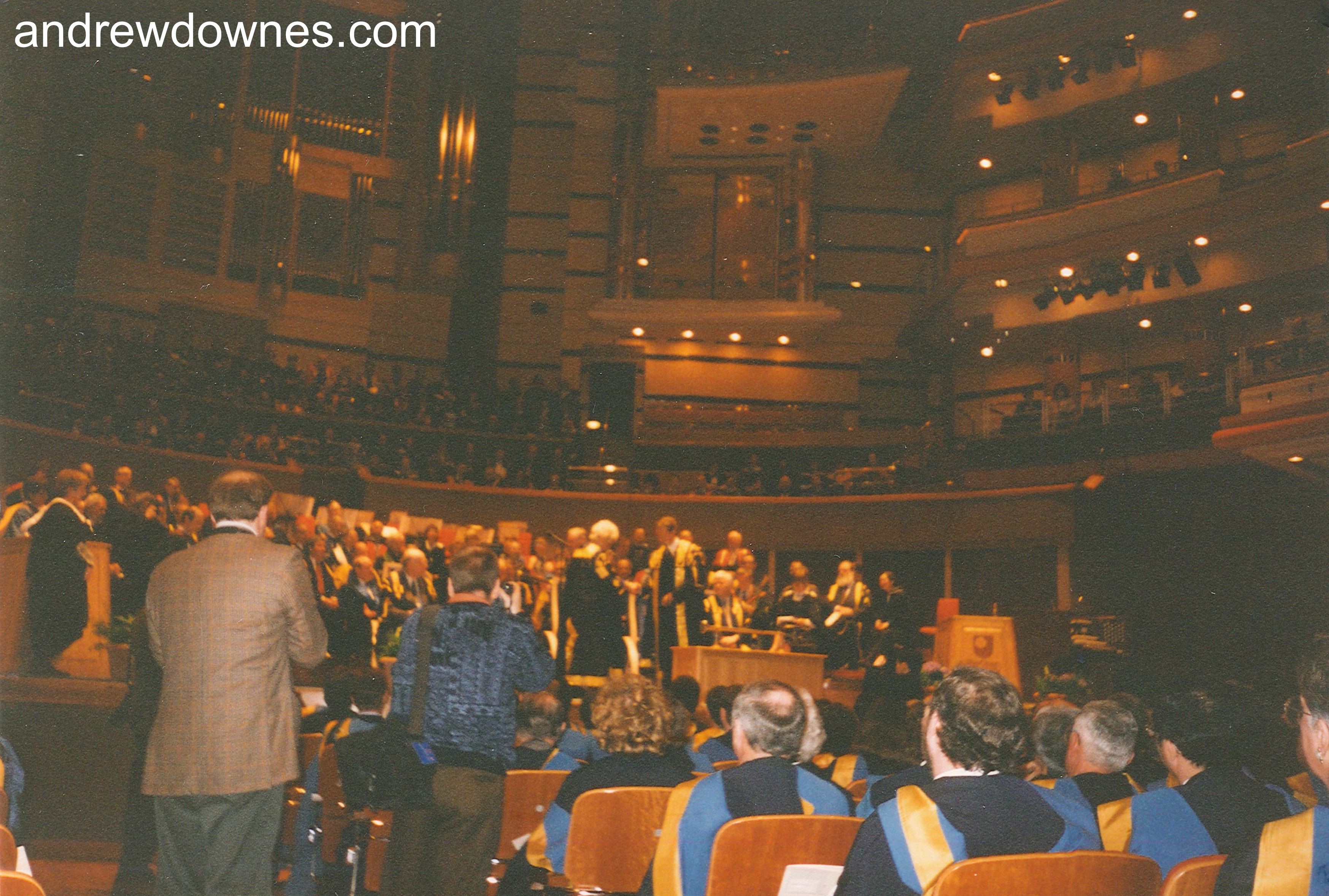 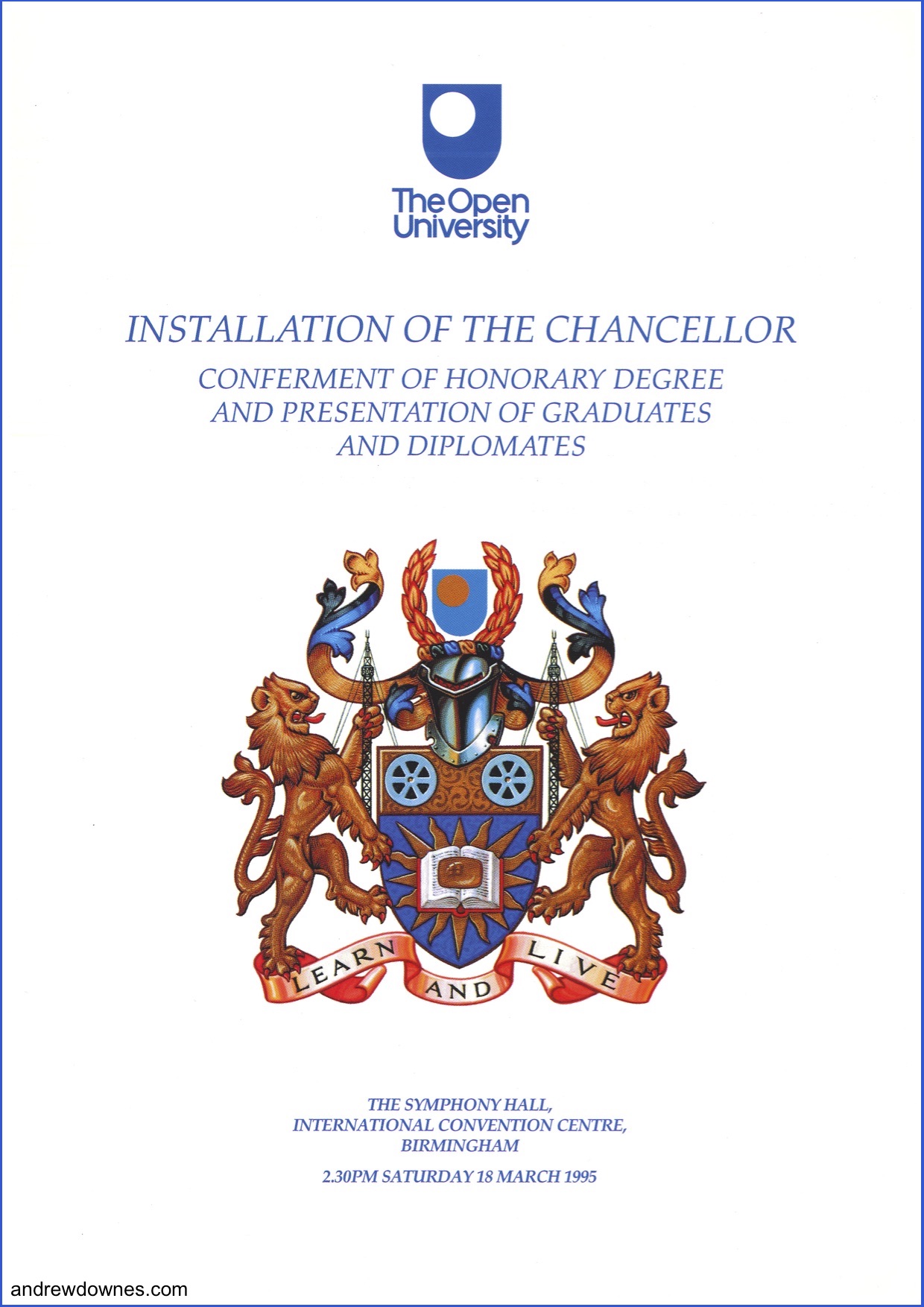 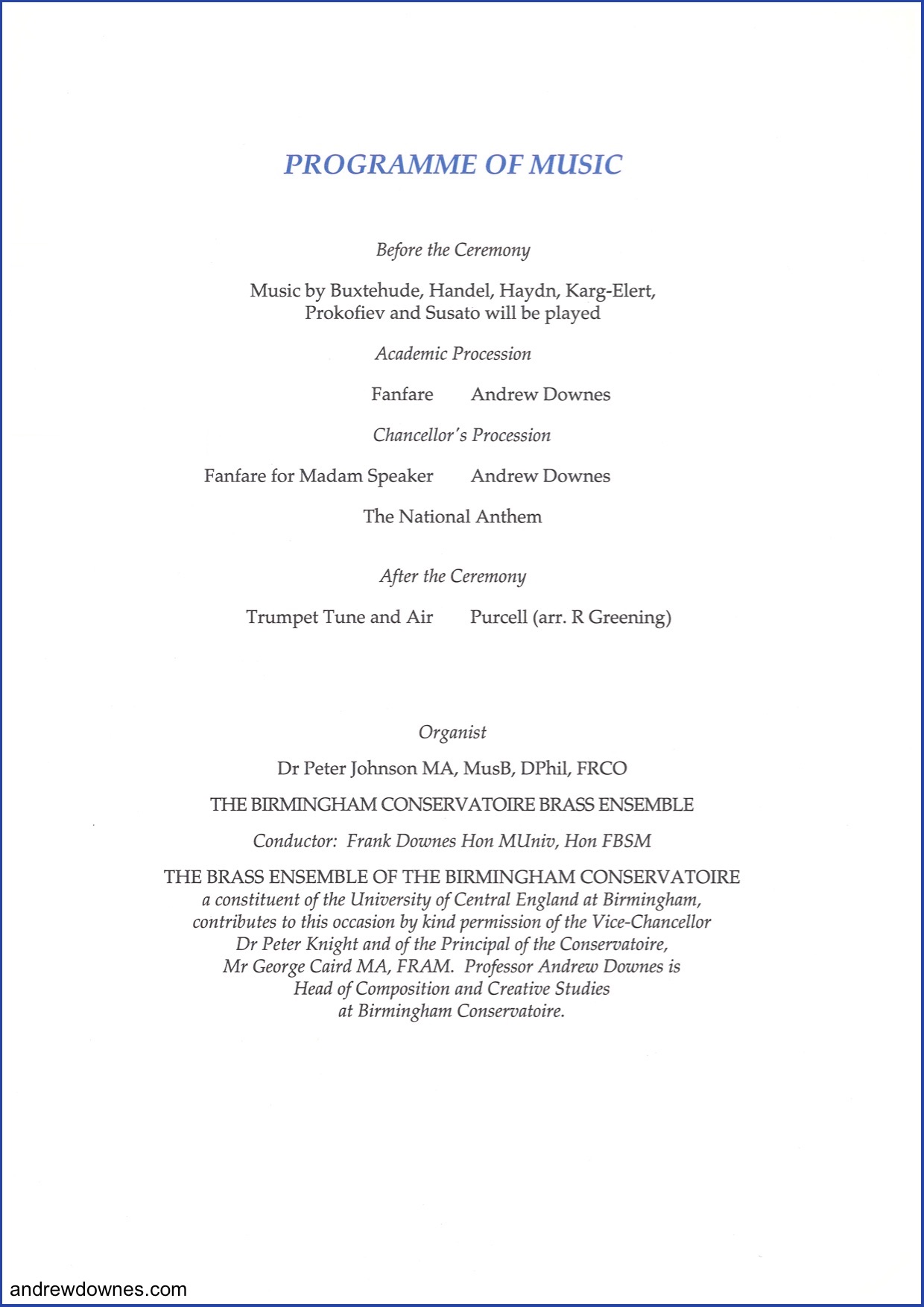 After the Ceremony in Symphony Hall, Birmingham, during which Andrew's Fanfare for a Ceremony was also played, Betty Boothroyd was keen to meet Andrew, the composer of this work written specially for her. The two got on extremely well together and Betty asked Andrew to sign a copy of the score for her. 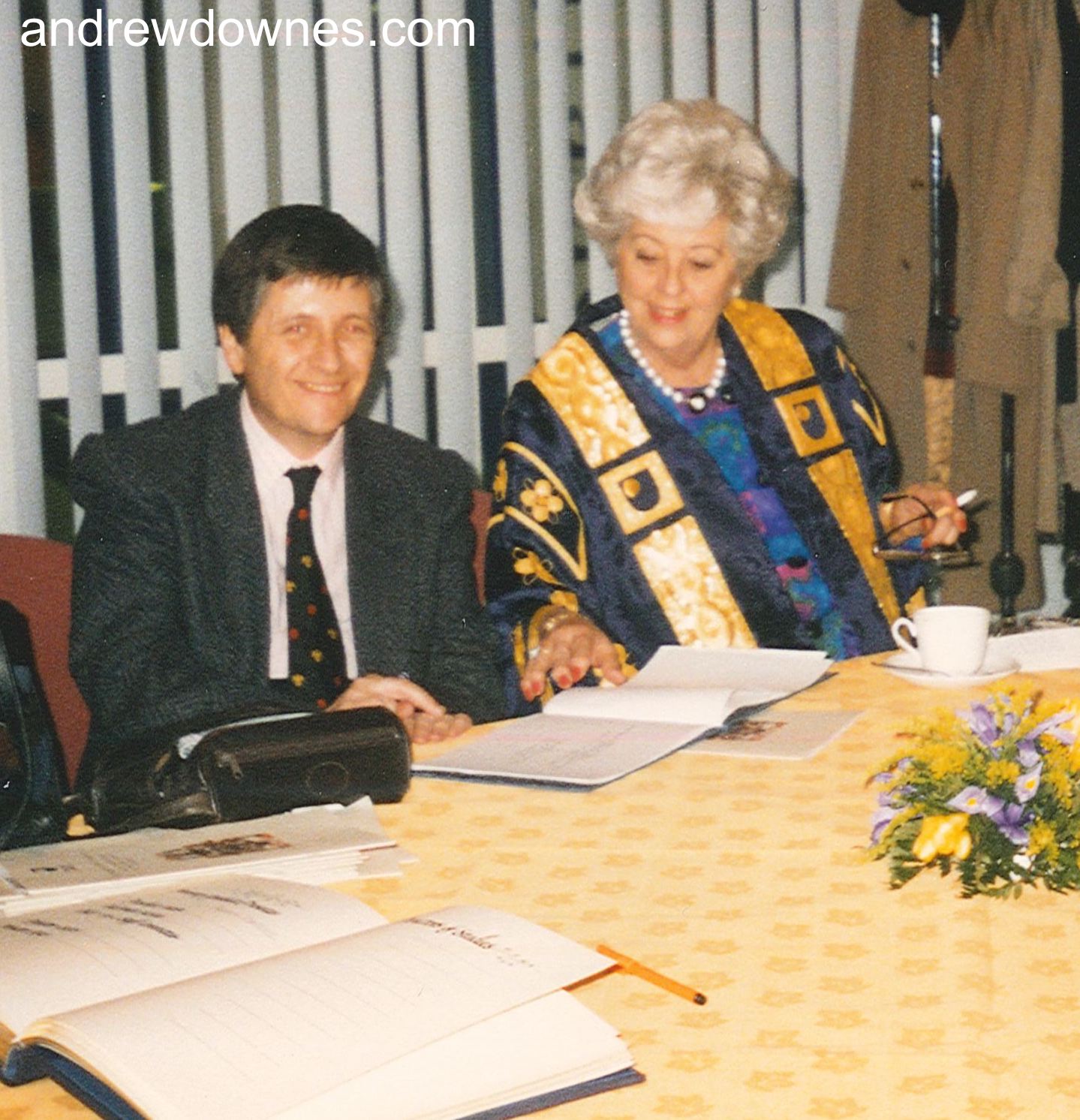 She also asked for a piano version of the Fanfare, so that she could play it on her piano in the House of Commons! We duly prepared her a copy and Andrew received a lovely reply from her. 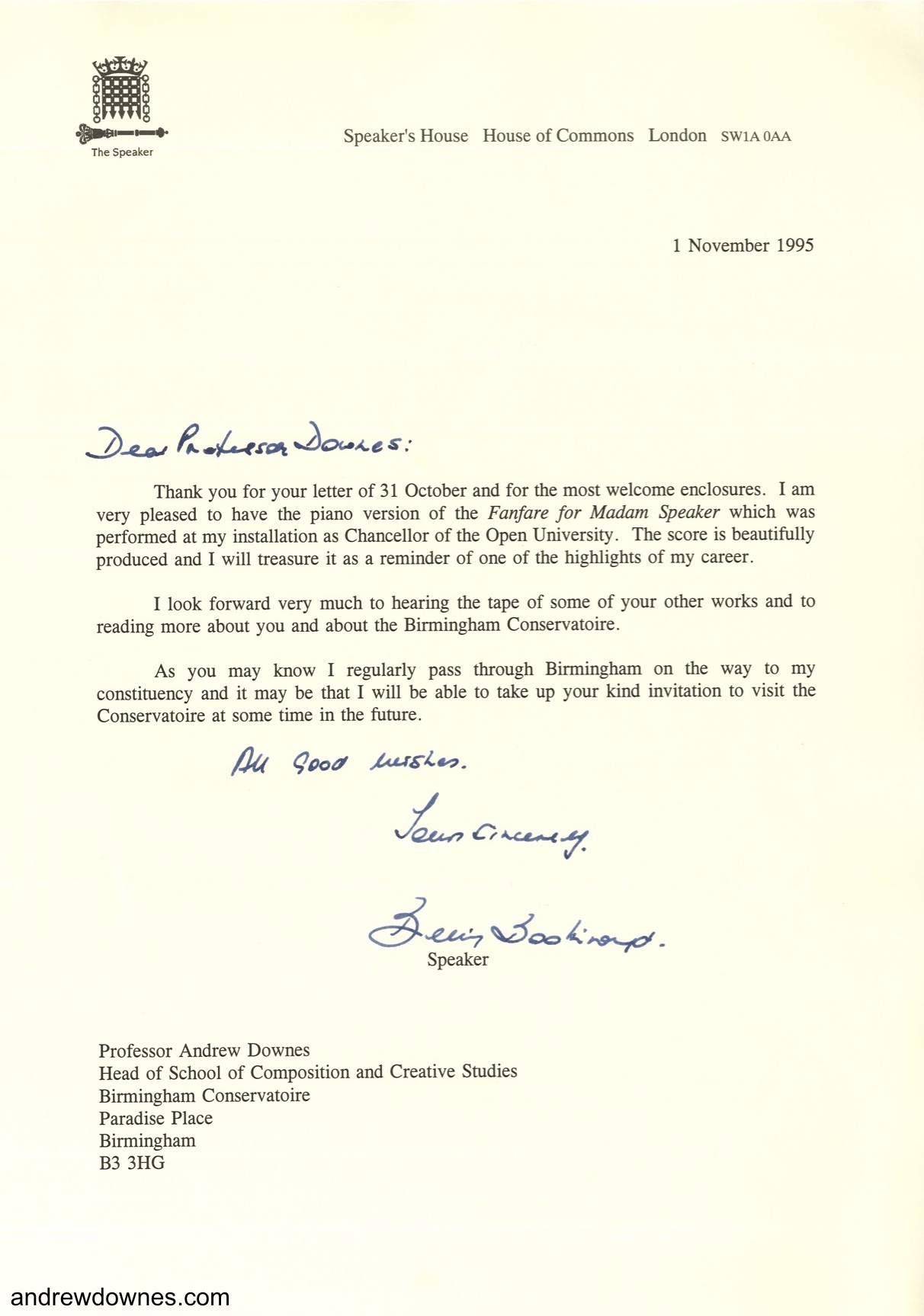 Here is the cover of the piano version and page 1. 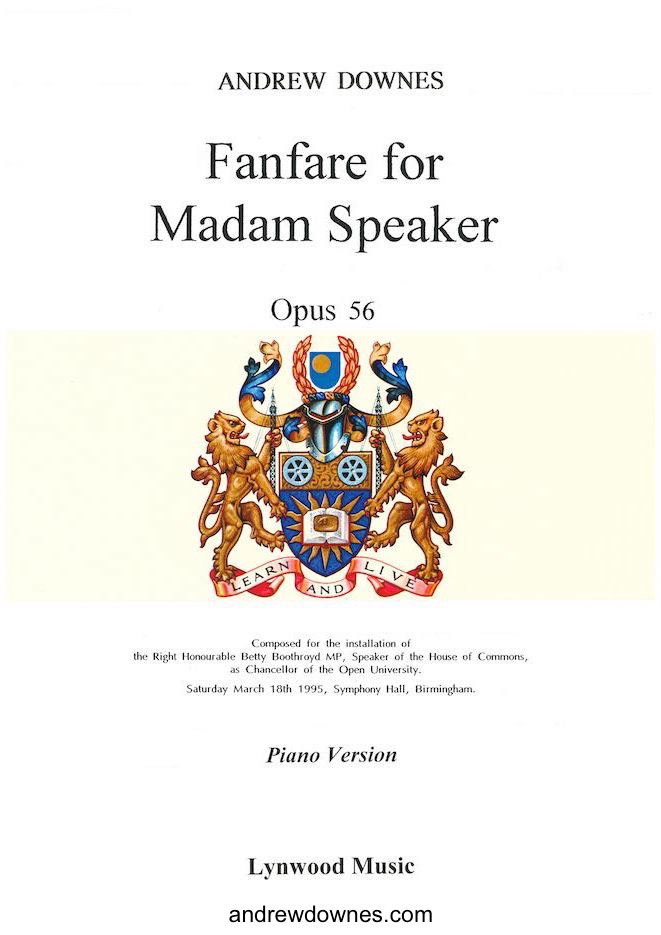 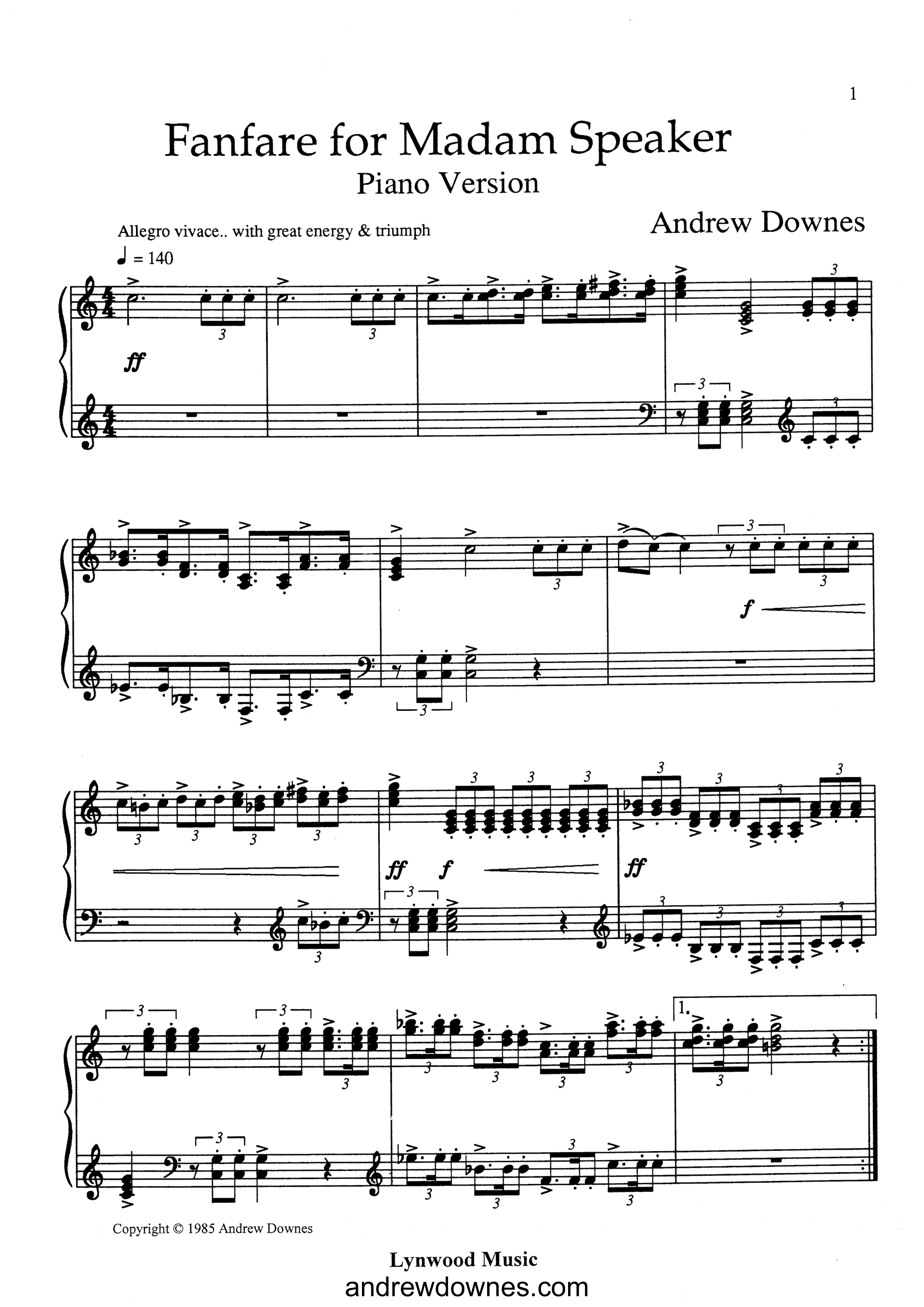 Reviews of the Installation 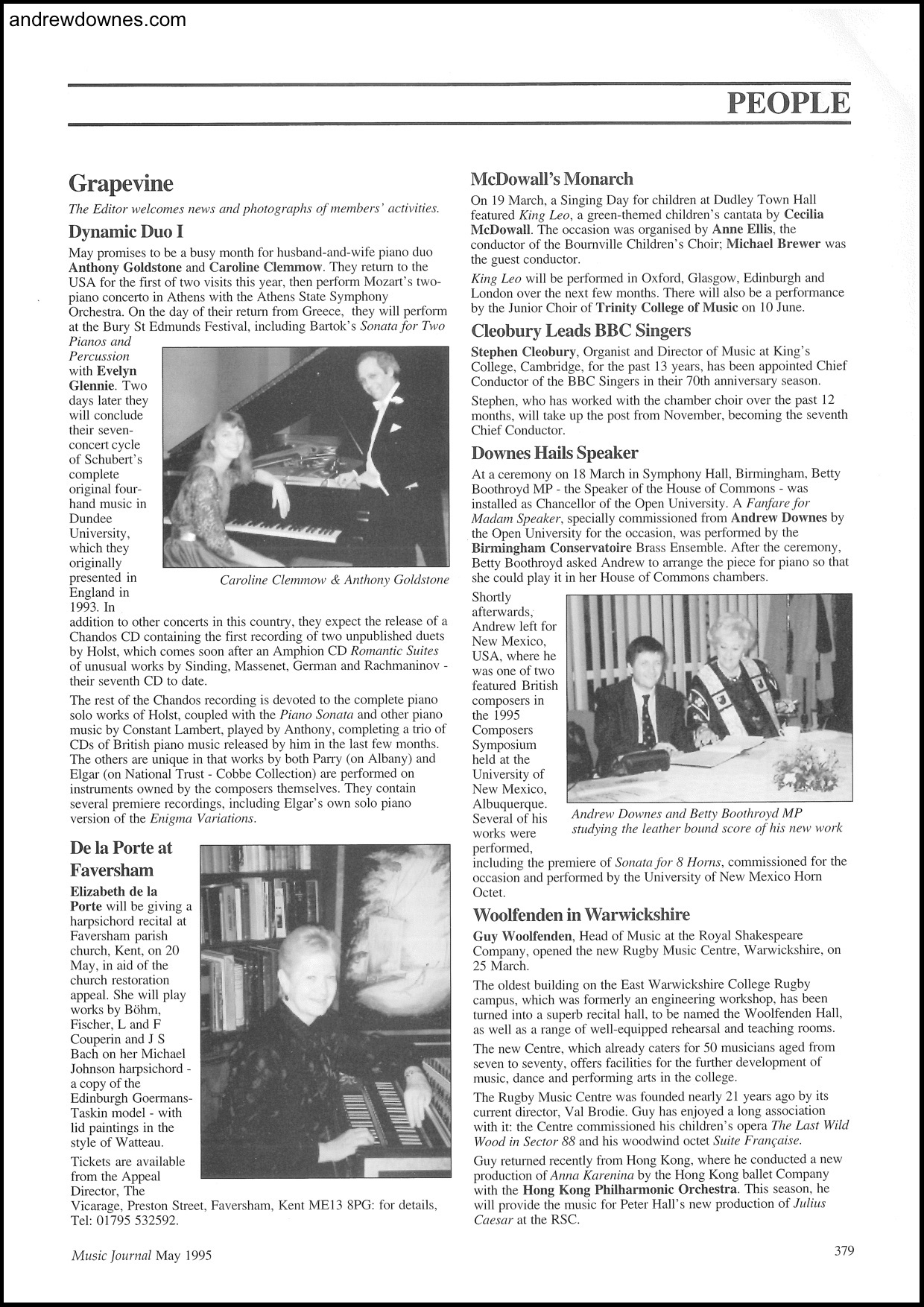 I arranged this work for my Hagley Community Orchestra for a fundraising concert in St Saviour's Church, Hagley, Worcestershire. It received it's first performance in this form on March 17th 2012. 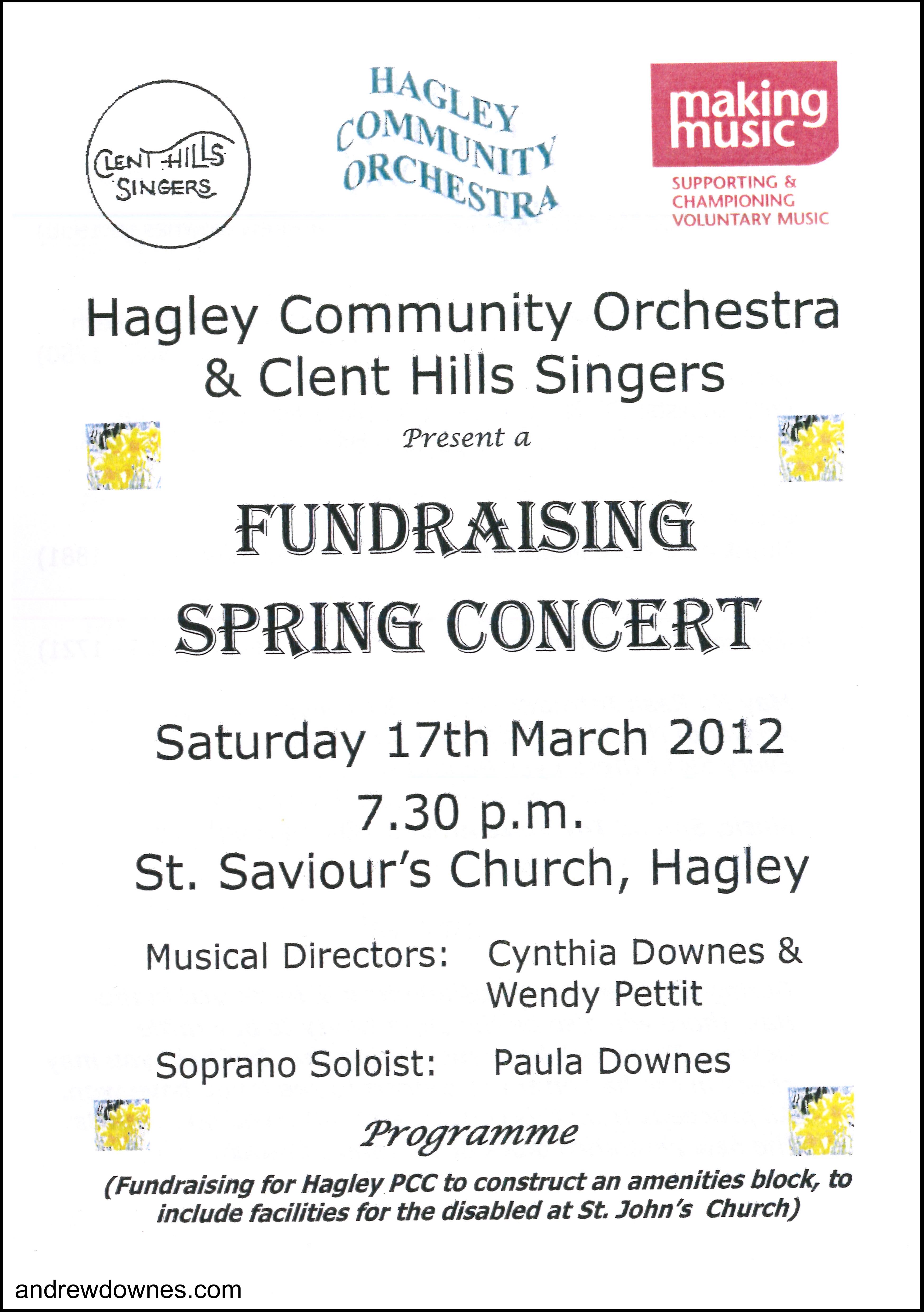 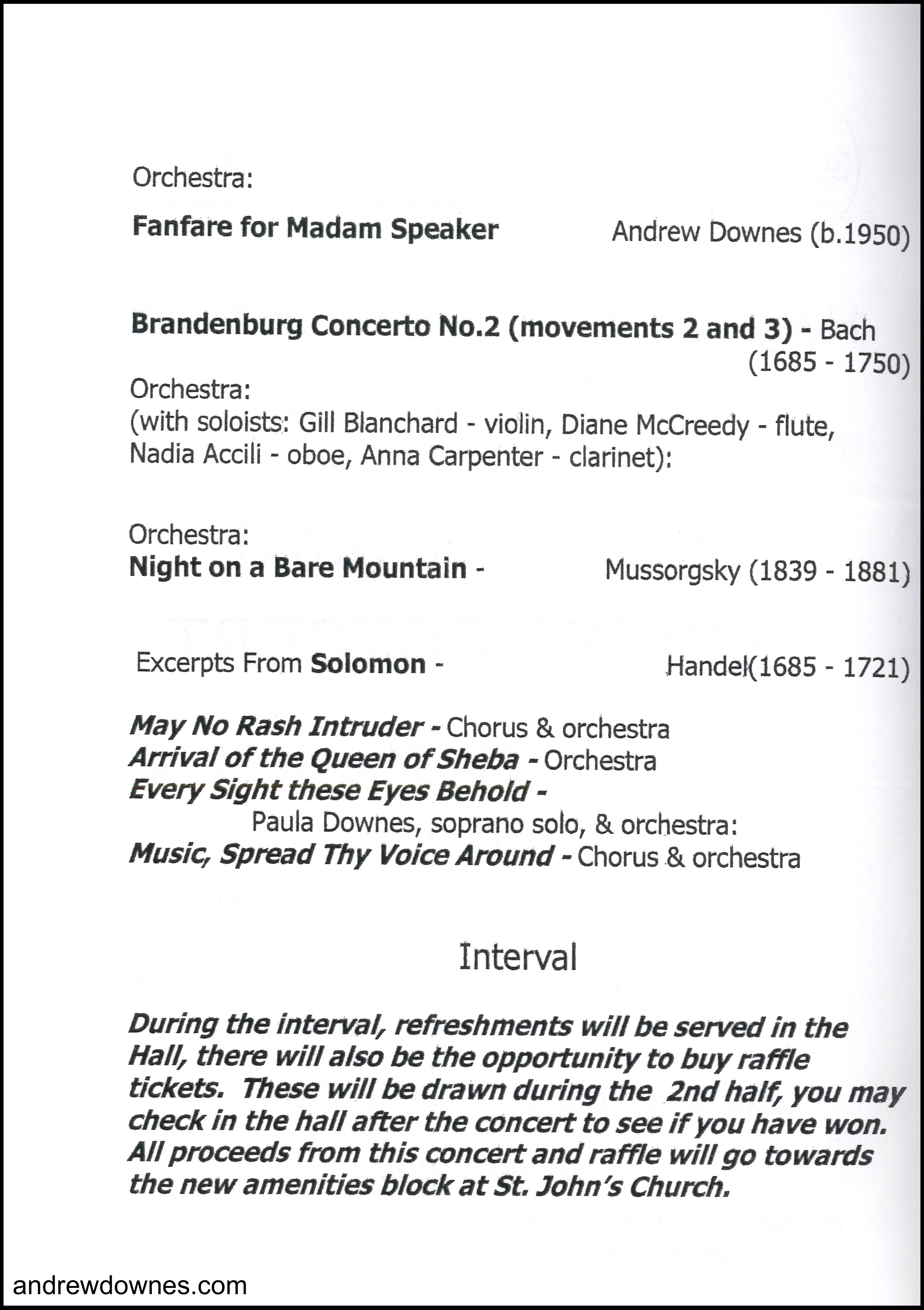