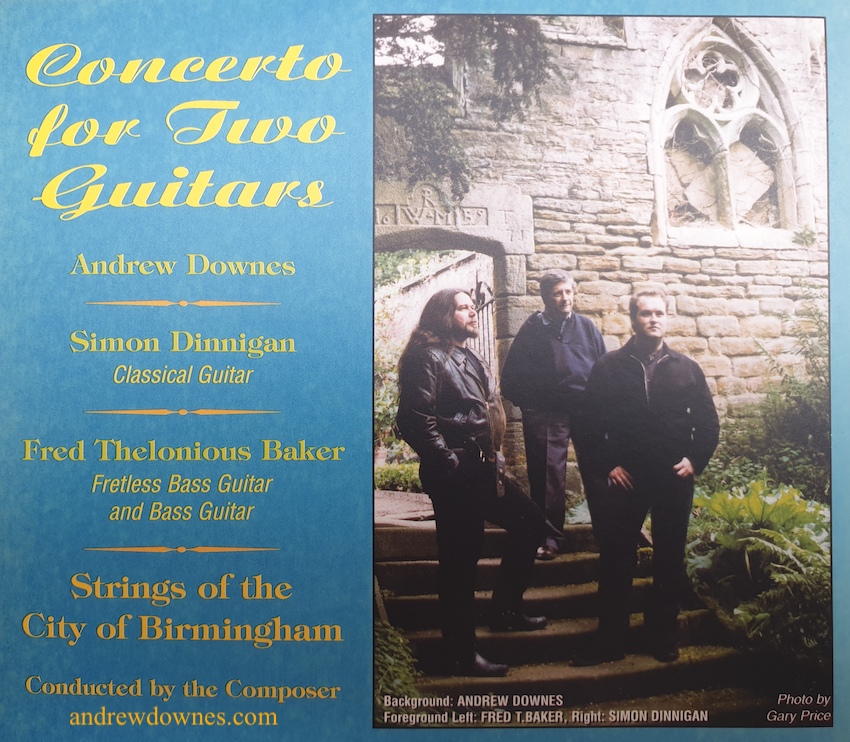 An account by Andrew's wife and publisher, Cynthia Downes, posted on October 10th, 2021

The story of the Concerto for 2 Guitars needs to go back to the 1970s:

When Andrew applied for his post as Music Theory Teacher at the Birmingham School of Music (now known as the Royal Birmingham Conservatoire), there was no Composition at the College.  The interviewing panel appointed him because he told them he was very interested in introducing some Composition there.  At first he taught mainly theory and introduced an Experimental Music Workshop, but was quite early on allowed to establish Composition as a second study at the School of Music, later becoming Senior Lecturer and Head of his fledgling Department.  The guitar teachers expressed an interest in becoming part of this Department and one of the earliest guitar/composition students was Fred Thelonious Baker.  Fred, already a brilliant guitarist, was grateful to Andrew for encouraging his bass guitar studies, Fred’s main love.  Fred could already play Bach’s Cello Suites amazingly on his bass guitar.

In 1992, Kevin Thompson, the new Principal, created four Schools at the College, which he renamed Birmingham Conservatoire.  One of the Schools was to be the School of Composition and Creative Studies, of which Andrew was to be the Head.  Andrew had free rein to set up all kinds of creative areas within his School and employ new staff.  He had already begun employing Fred Baker, who had become a star in the bass guitar world, playing with top big bands and many prestigious groups, and accompanying top artists.  Fred was thrilled to have his work at the Conservatoire and still works there to this day.

Simon Dinnigan was also a high flying acoustic guitar player, famous in his field, playing often on Radio 3 and in important venues throughout the UK.  Simon had studied at the excellent Chetham’s School of Music. He was also teaching guitar at Birmingham Conservatoire in Andrew’s School.

One day in 1996 Andrew came home from work and told me he was going to be writing a Concerto for Simon and Fred with String Orchestra.  I wondered how a classical acoustic guitar and an electric bass guitar were going to sound and balance together, but Andrew, always able to miraculously create beautiful music for all types of forces, composed a wonderful work, which the soloists and the Thallein Ensemble from the School of Creative Studies performed brilliantly in the premiere on 18th November 1997 in the Adrian Boult Hall, Birmingham. Andrew himself conducted the performance.  The work suited the ethos of the new School of Creative Studies perfectly.

Advertising before the event: 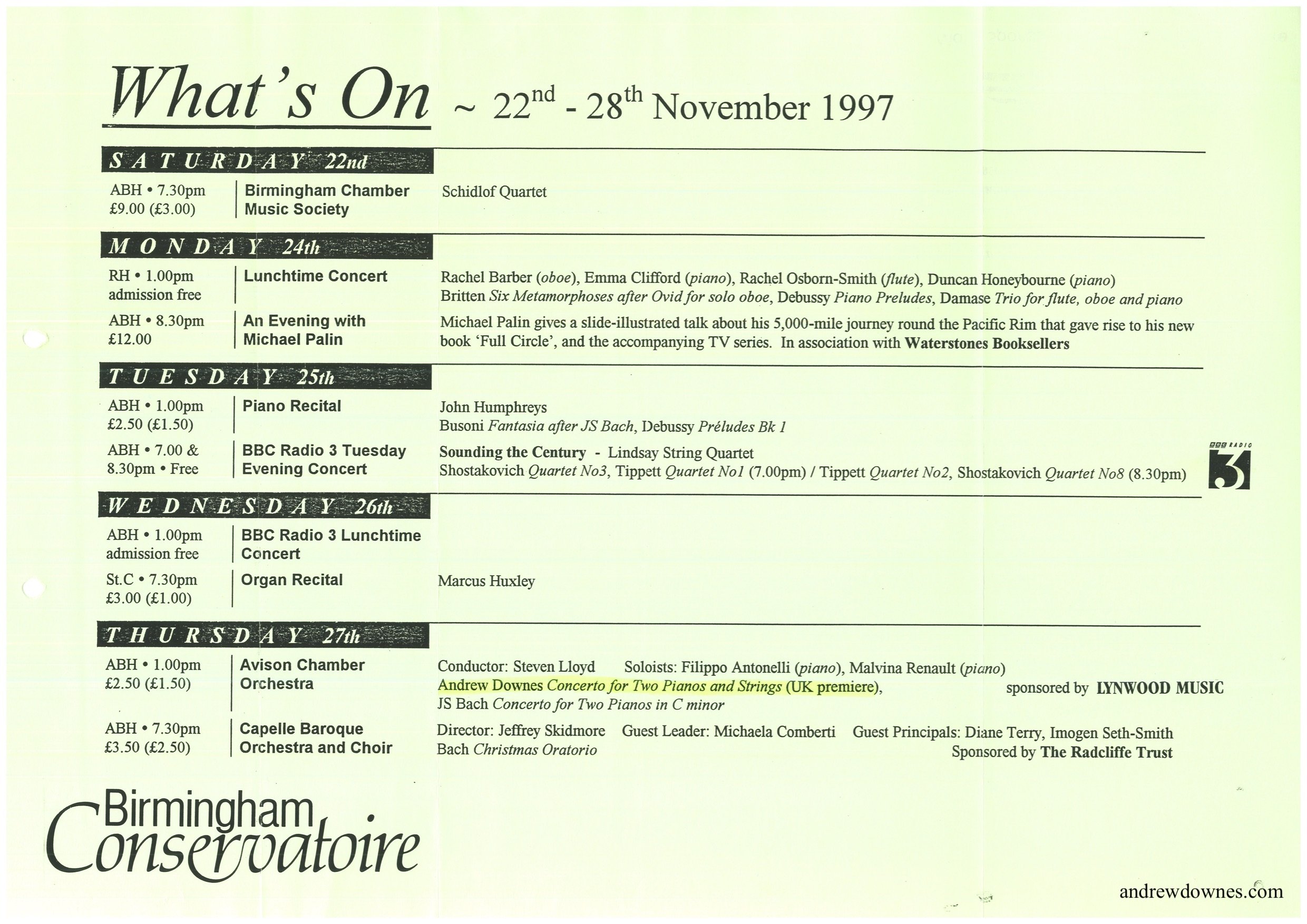 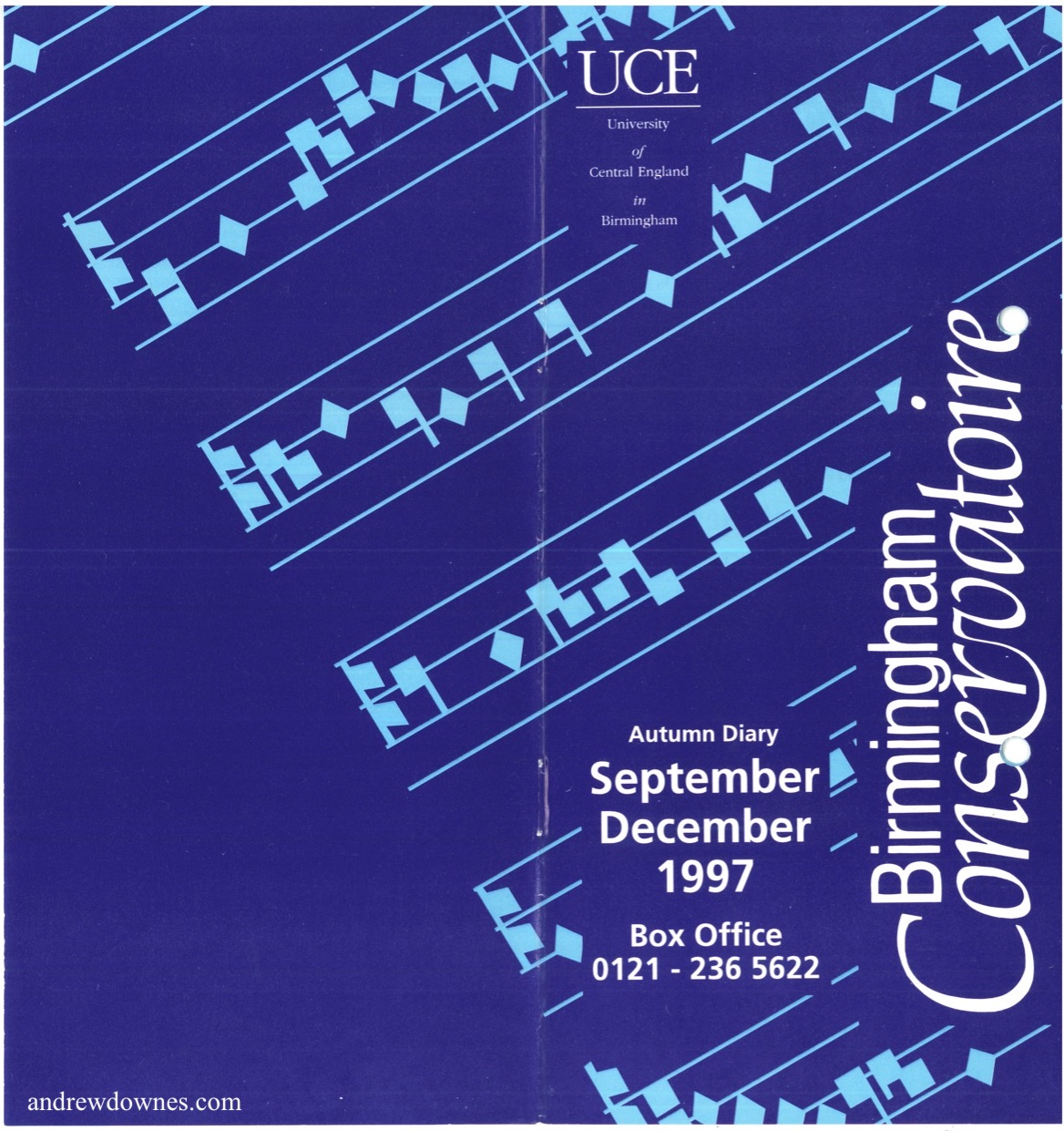 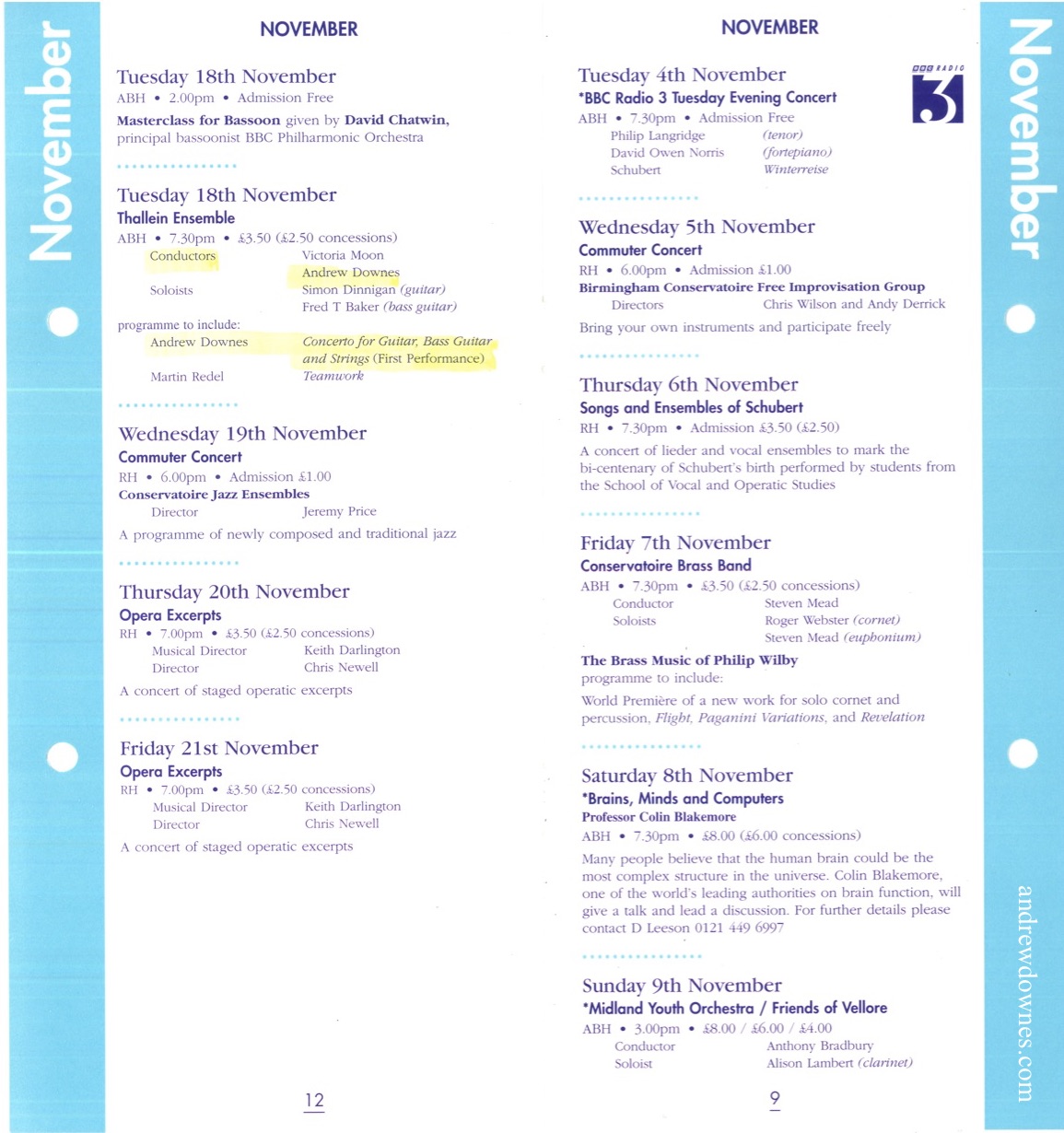 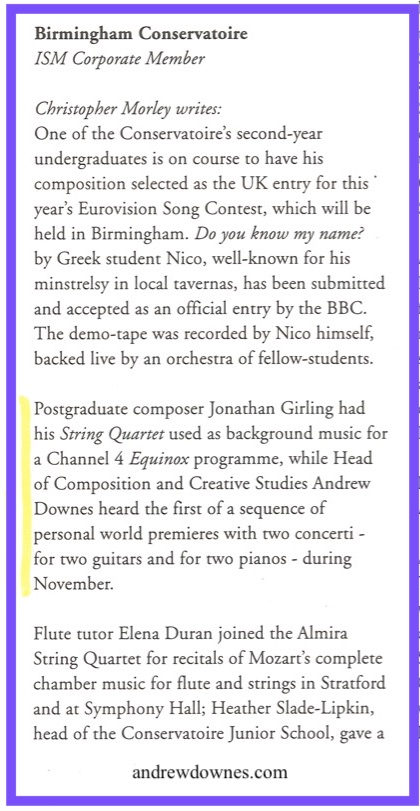 Letters after the event: 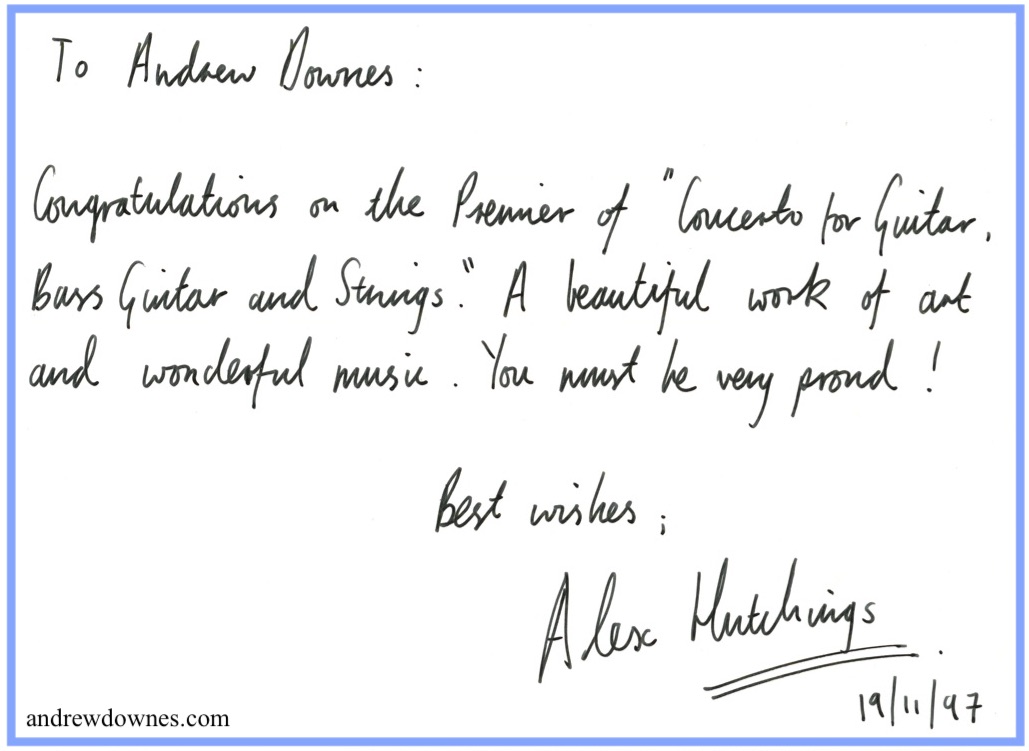 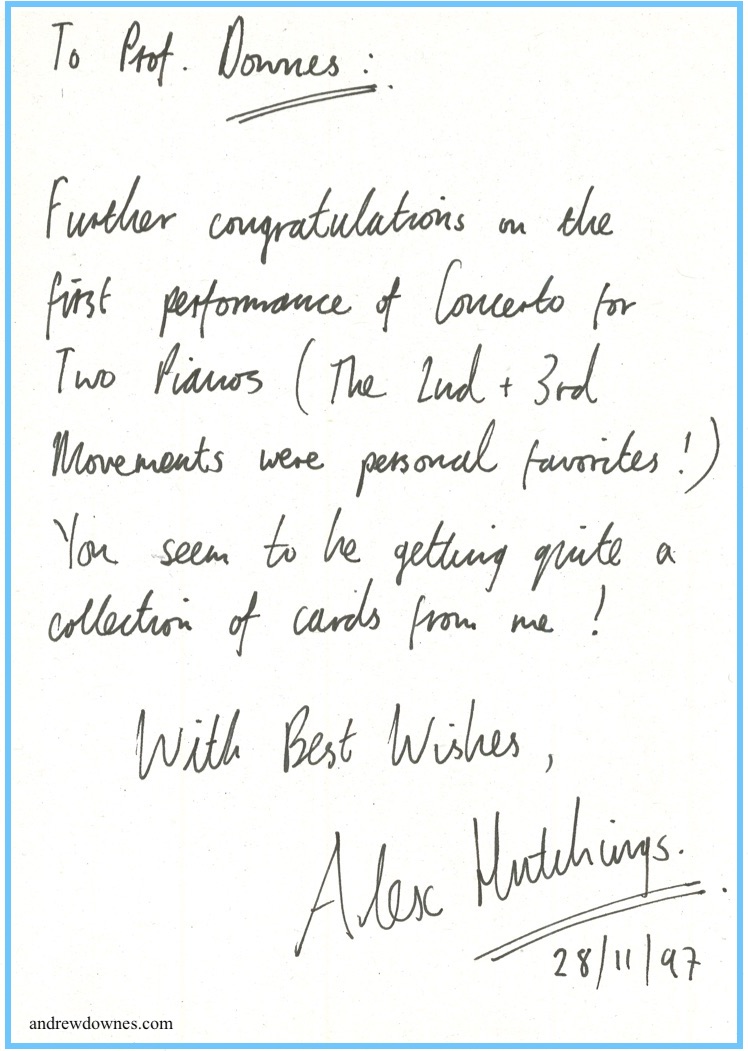 In July 1999, Simon and Fred recorded the Concerto with string players from the City of Birmingham Symphony Orchestra.  Again Andrew conducted.  Fred also created an arrangement for himself and Simon of Andrew’s Piano Sonatina Movement 2, which he entitled Cool Largo and which they also played on the CD. The disk, entitled Concerto for Two Guitars (Classicprint label - CPVP013CD), has proved very popular and has been broadcast on BBC Radio 3, several times on Dutch Radio, and many times on Musicians Page Radio, Los Angeles, USA. 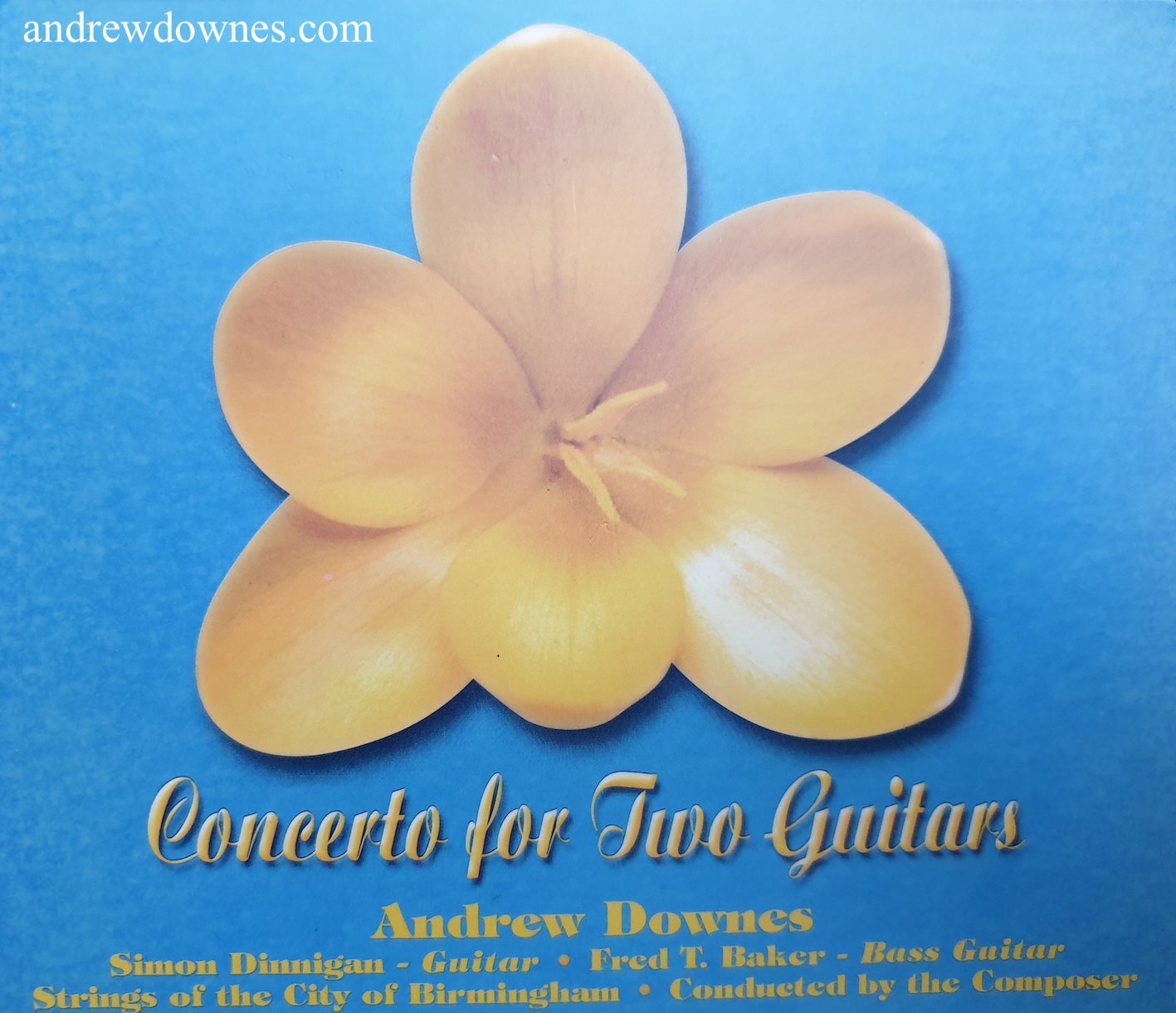 CD cover for the recording of Andrew Downes' Concerto for Guitar, Electric Bass Guitar and Strings and Cool Largo 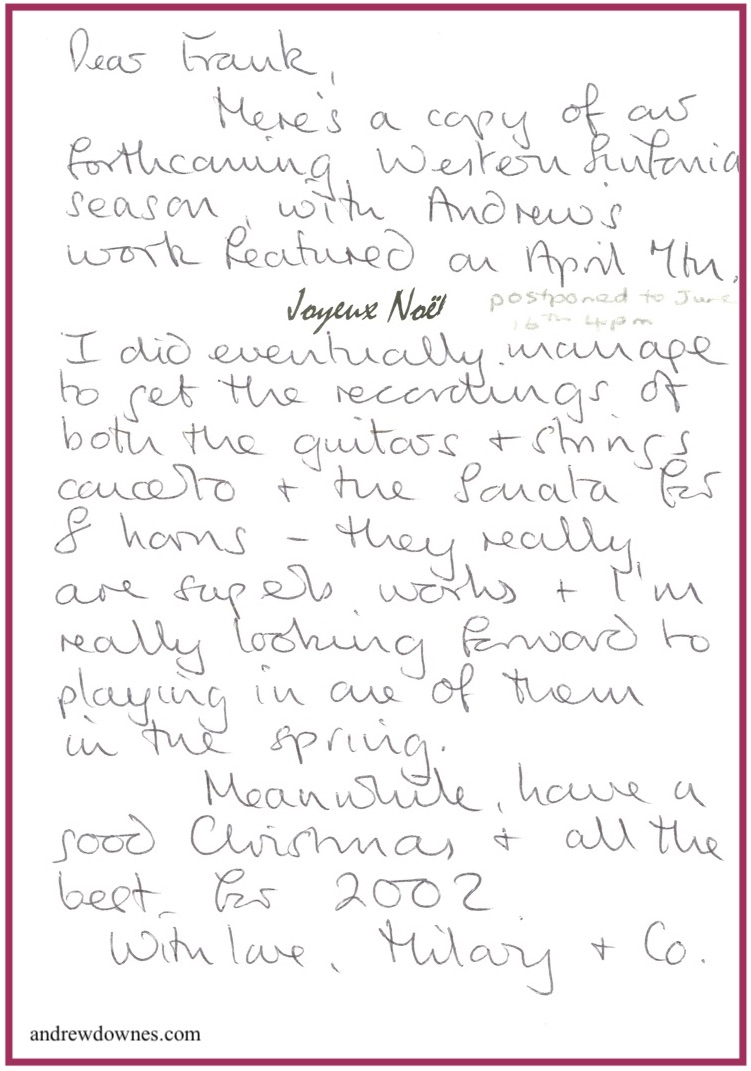 The concerto was subsequently performed on June 16th 2002 at the Phoenix Arts Centre, Exeter, Devon, by guitarists Steve Gordon, replacing Simon, who was suffering from a shoulder injury, and Fred T Baker, with the Western Sinfonia conducted by Scott Stroman.

Advertising before the concert: 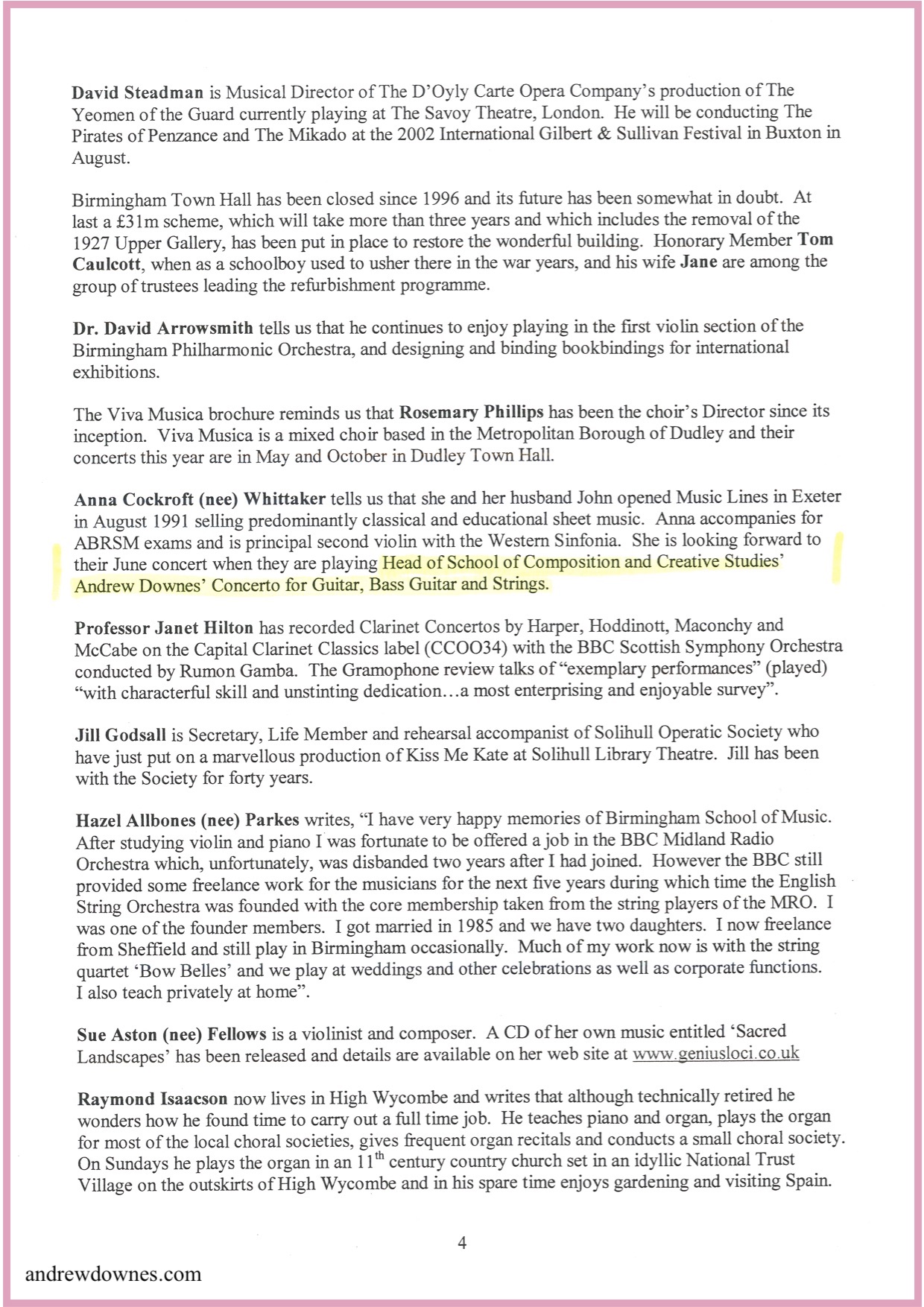 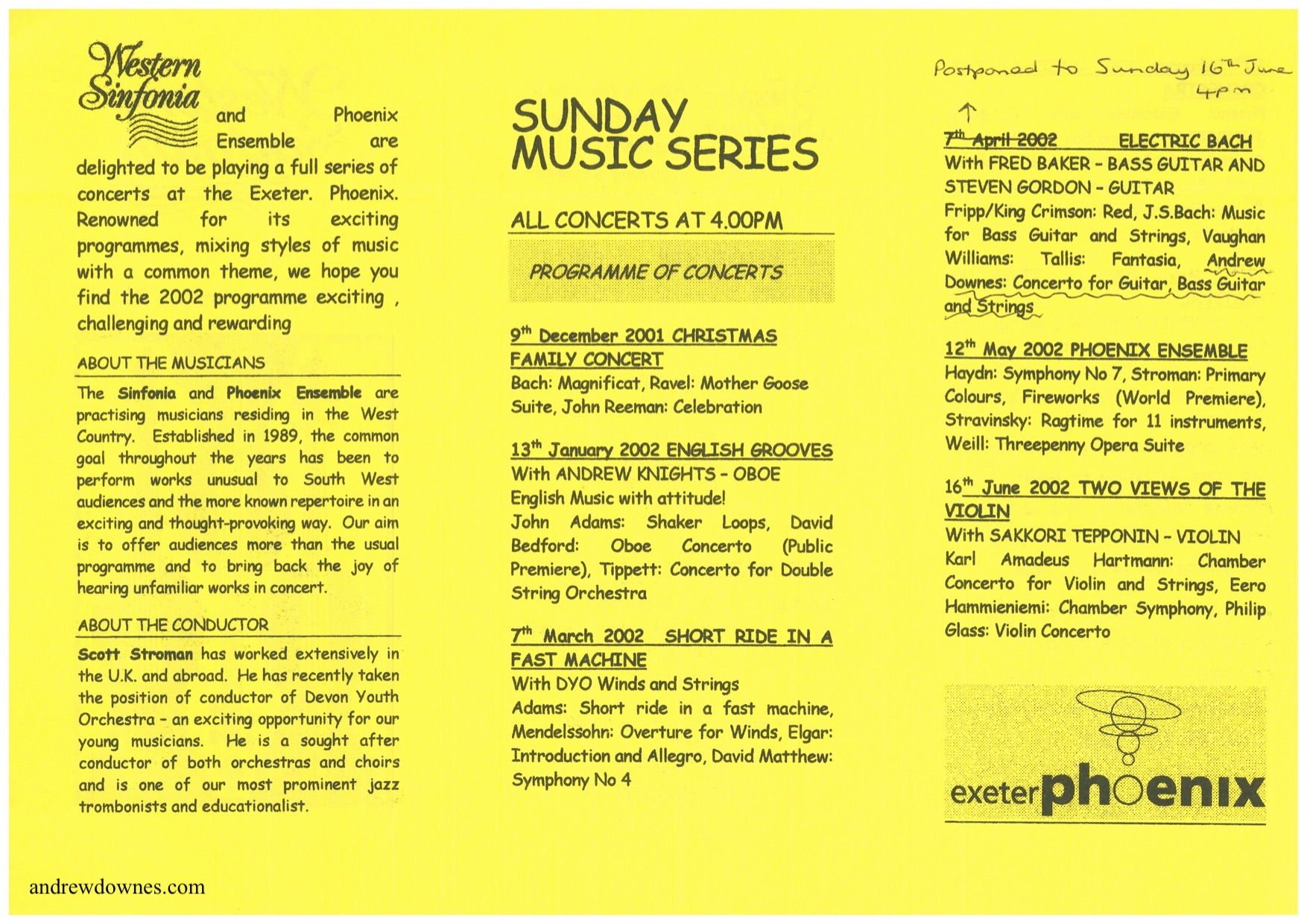 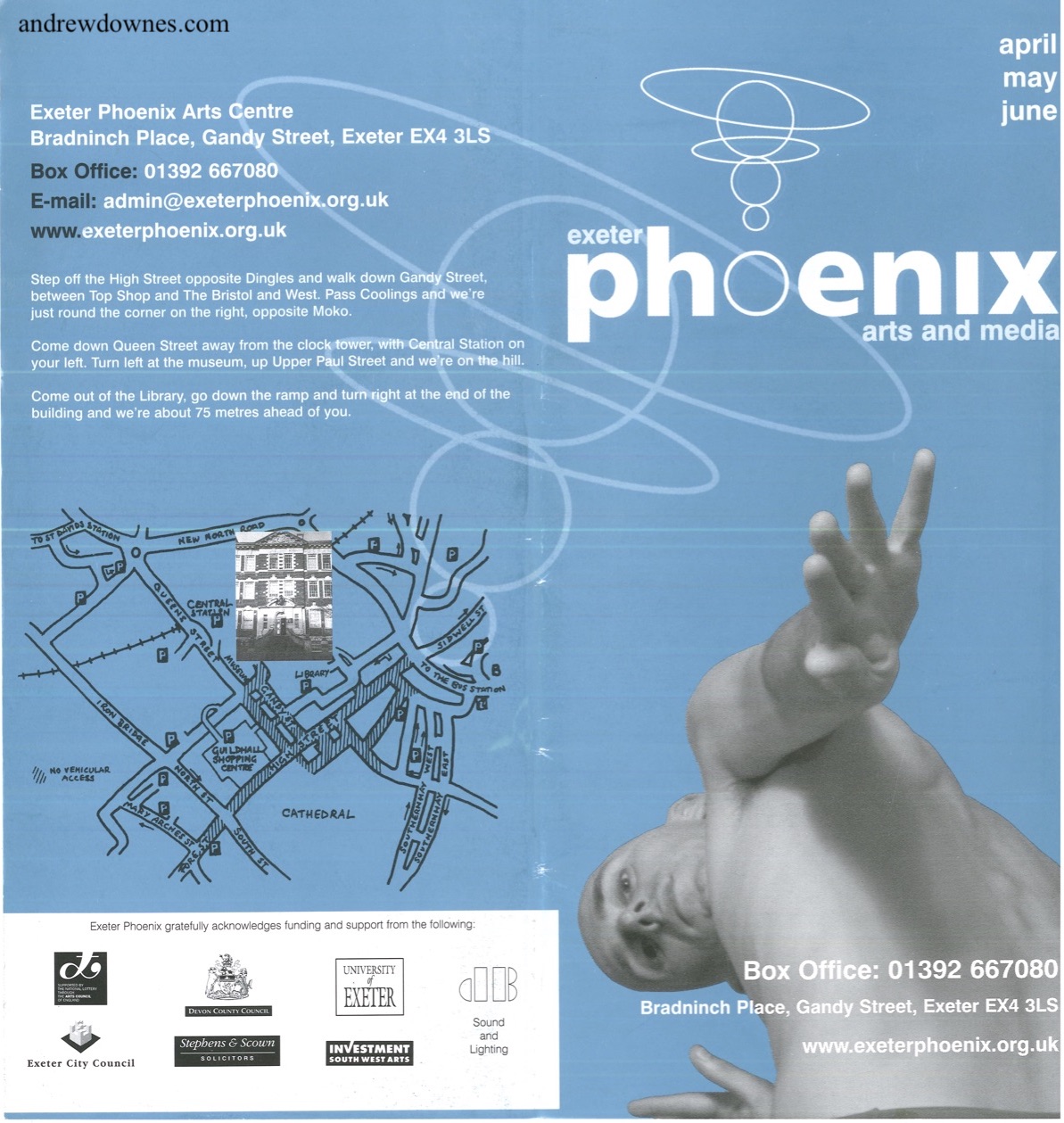 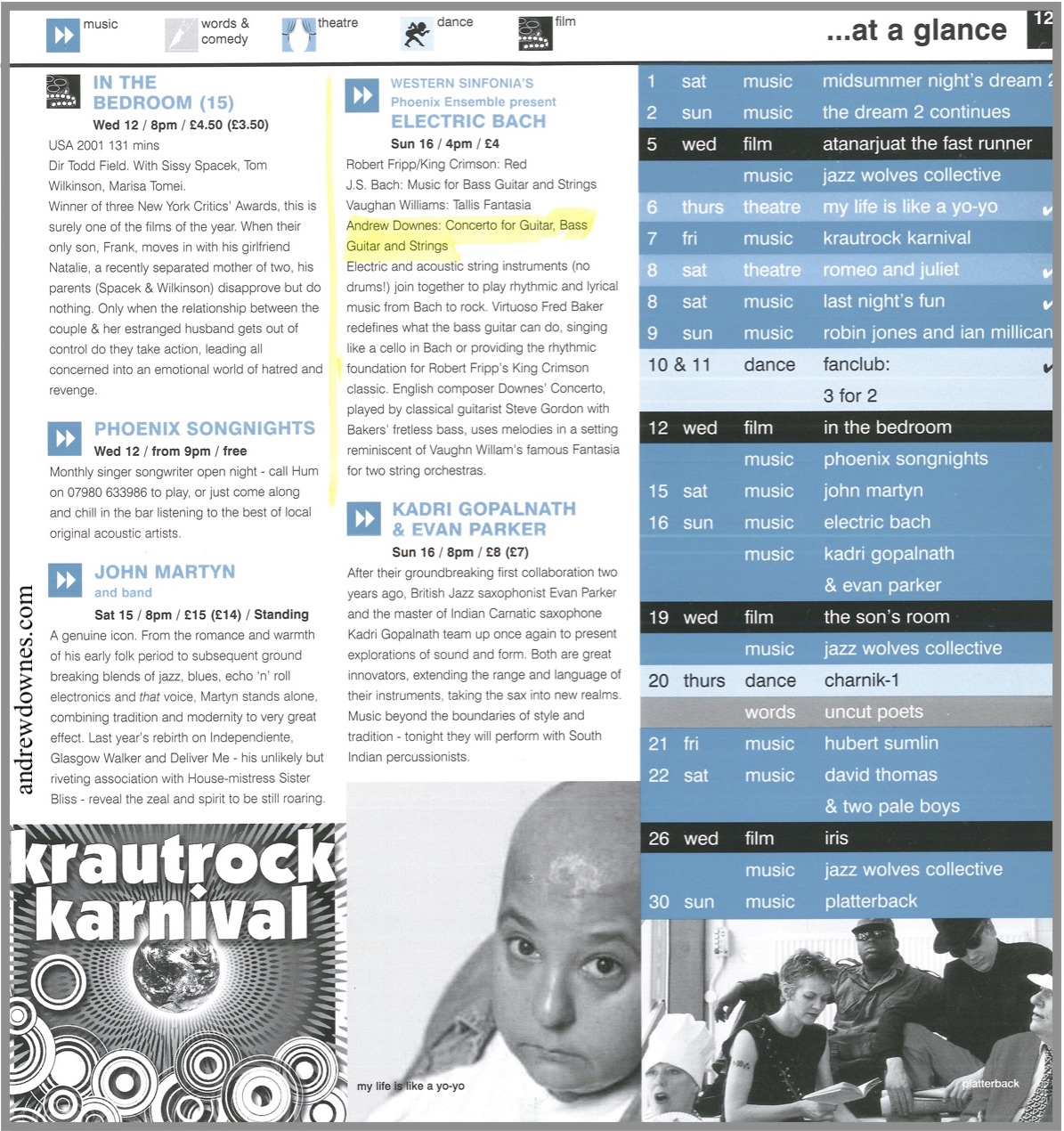 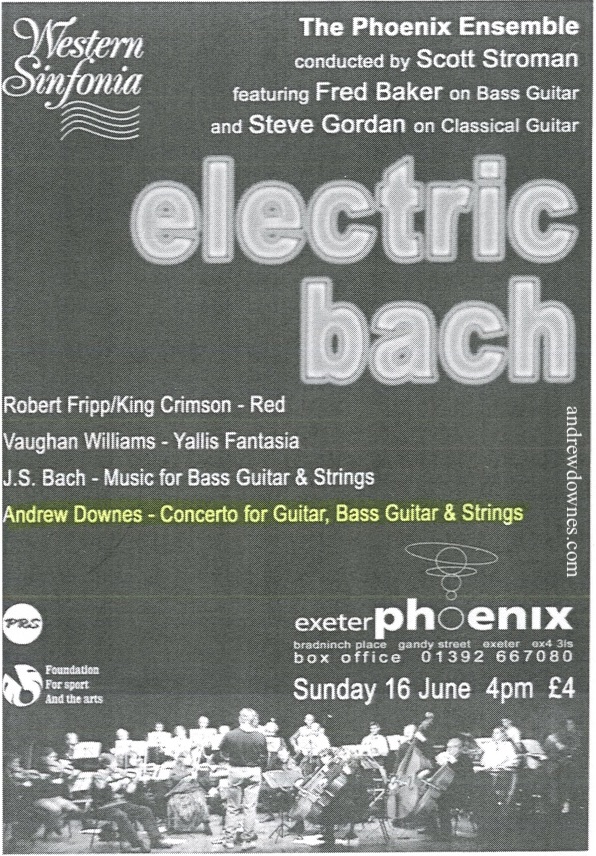 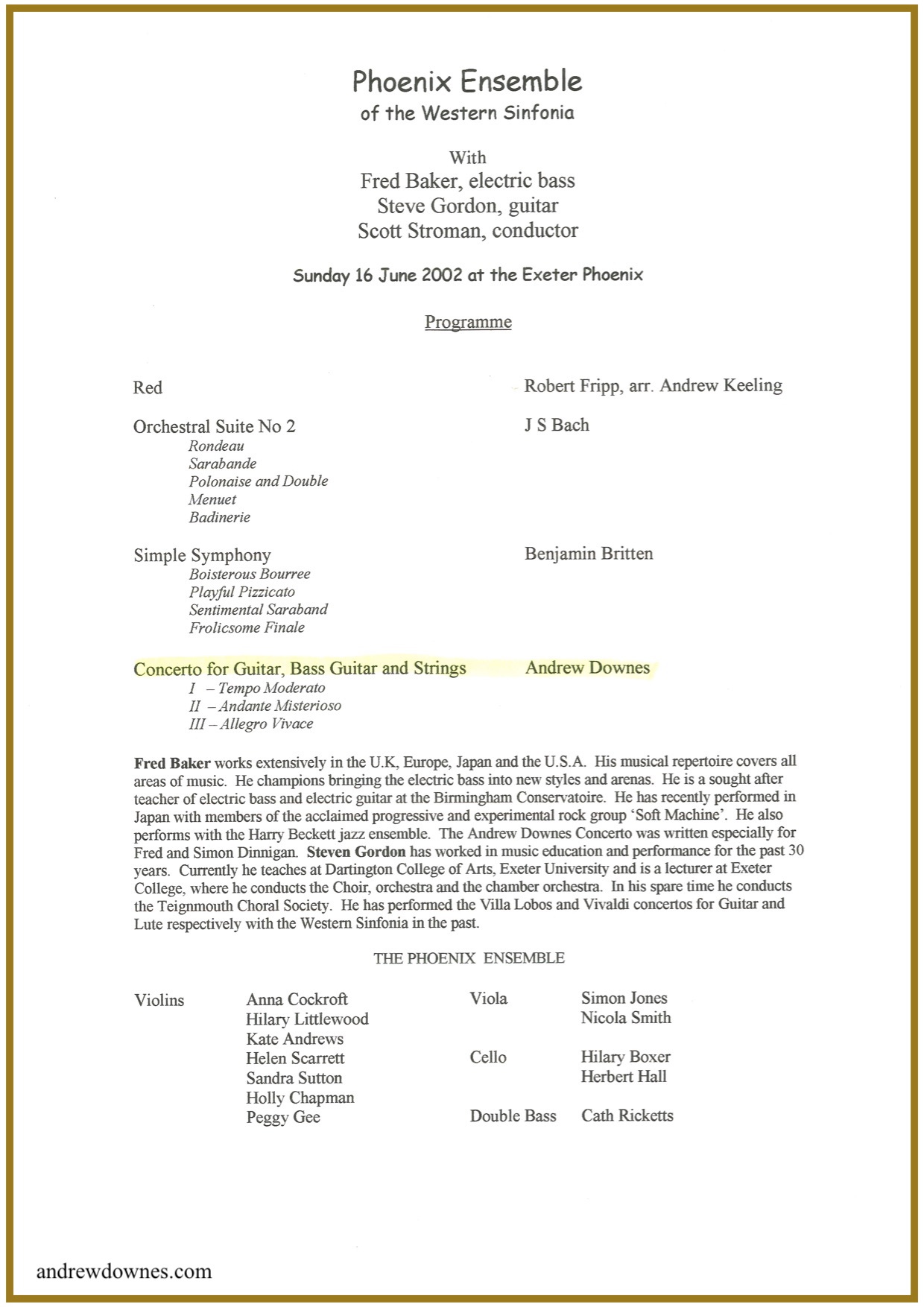 During Andrew’s 70th birthday year, the CD recording of the Concerto was broadcast online, in April 2020.  It can be heard on YouTube or Sound Cloud.

The CD received an excellent review on MusicWeb International in September 2001.

In September 2021 our daughter Paula interviewed Fred for her Podcast.