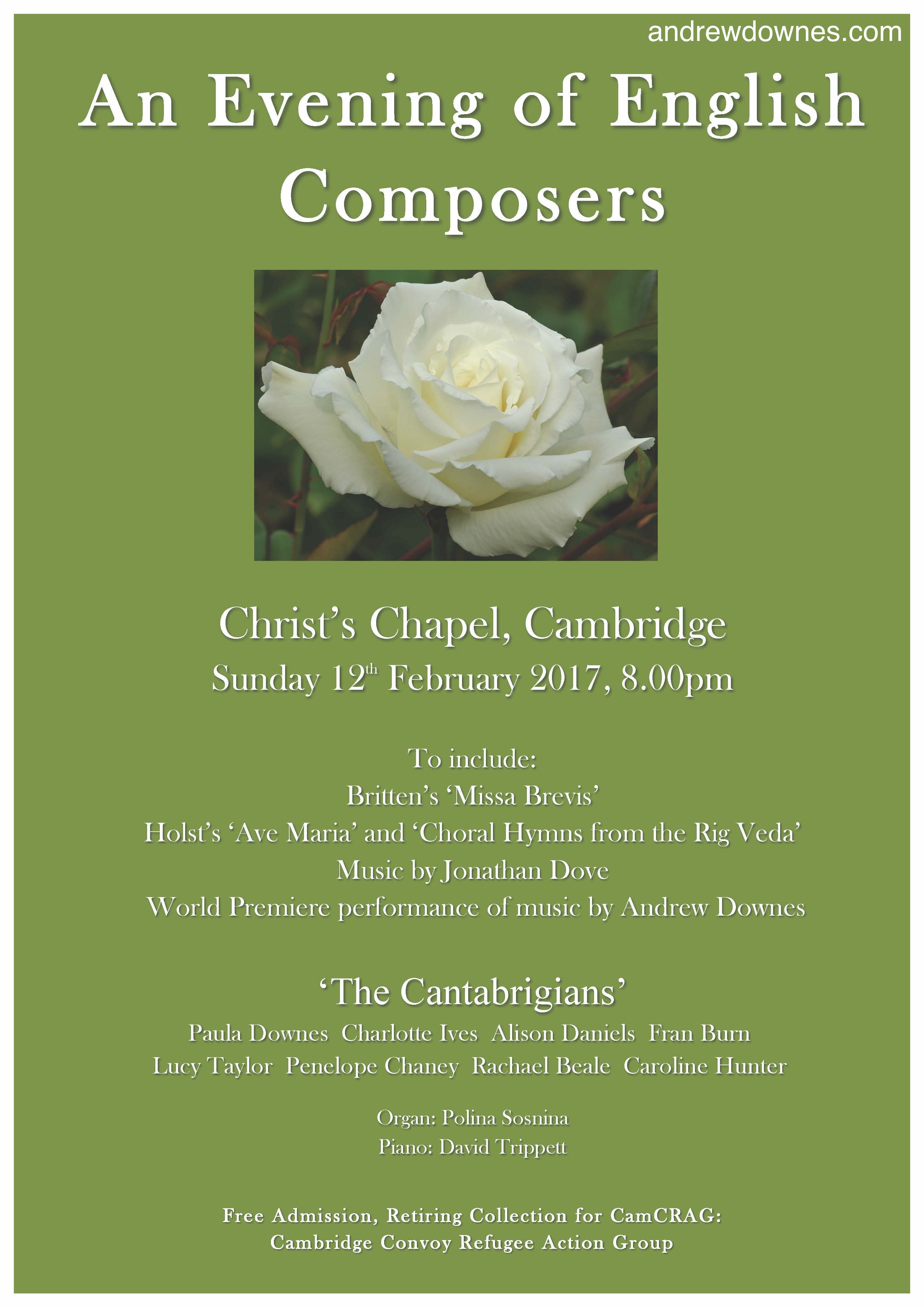 An account by Andrew's wife and publisher, Cynthia Downes, posted on June 10th, 2021

An eminent colleague of Andrew’s, the distinguished Pamela Cook, who taught singing at Birmingham Conservatoire, also ran a prestigious, world prize winning girls’ choir: Cantamus.  With her choir, Pamela commissioned Andrew to write a motet for high voices.  Andrew was delighted to be asked to write a work for Pamela’s highly successful choir. He chose for his text The Lamentations of Jeremiah 1:12 (Translation: All ye who pass by the way, behold and see if there be any sorrow like unto my sorrow.  Attend, all ye people, and behold my sorrow). 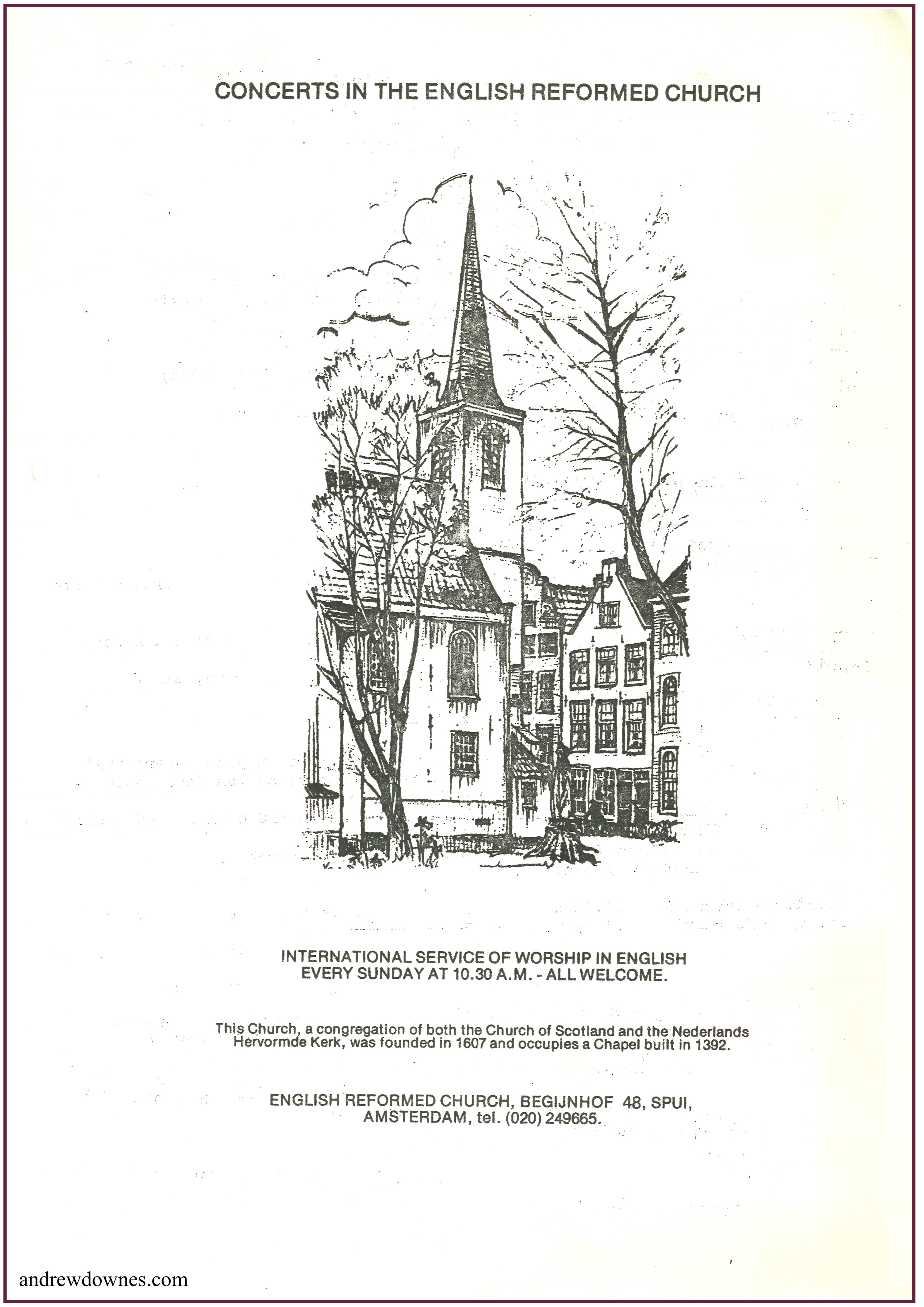 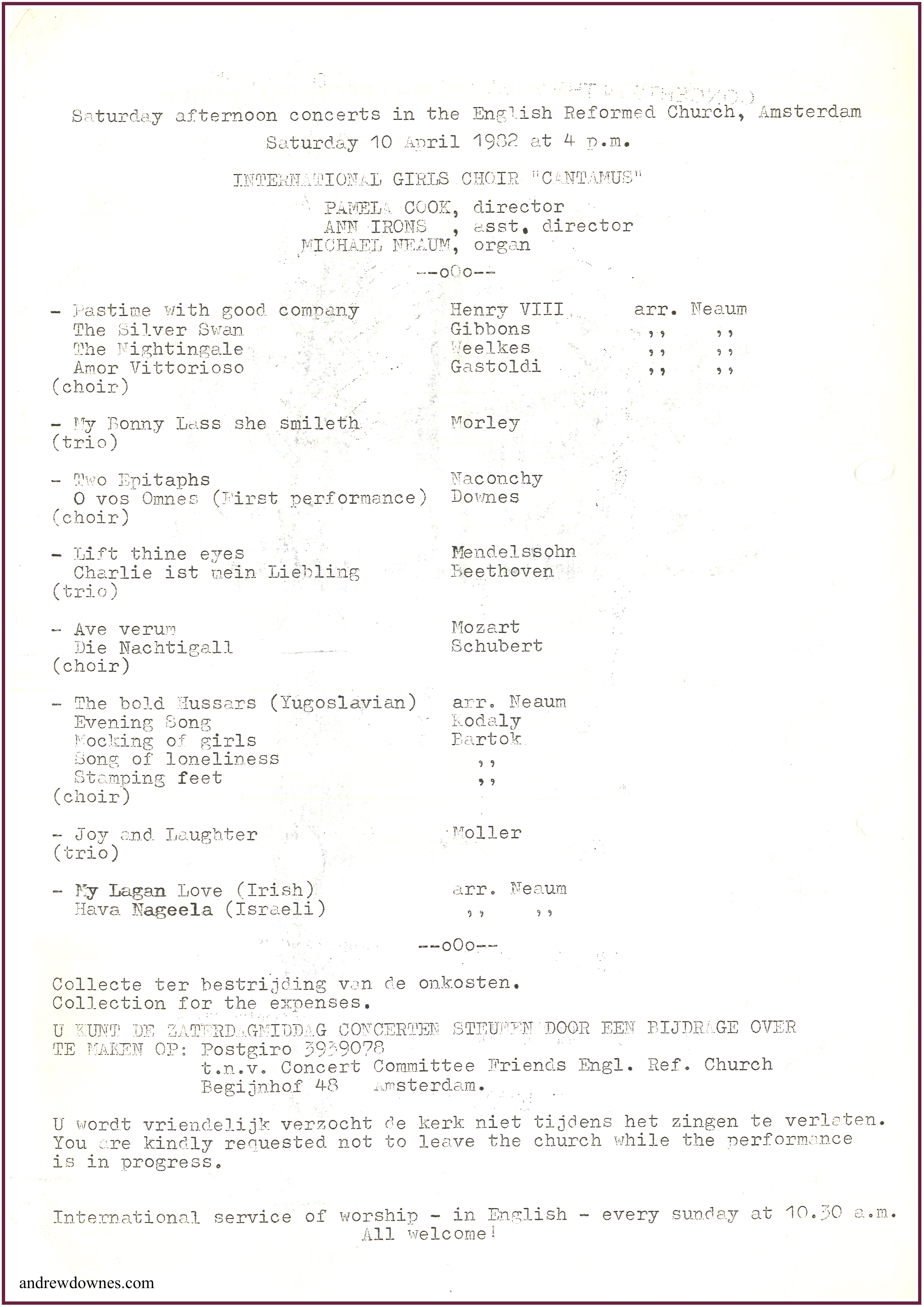 That same month the choir sang the work in Germany, in the Immanuel-Kant-Gymnasium, Heiligenhaus.  On May 22nd 1982 they gave the UK premiere of O Vos Omnes in Welbeck Abbey, Derbyshire.
Andrew and I went to the Welbeck Abbey performance.  Normally Andrew likes to allow loads of time to get to a concert.  This time I persuaded him to leave less time for our journey to Derbyshire.  I quickly regretted my actions because we had a puncture half way through our journey!  Andrew had to change the wheel and was wearing his concert suit.  We only arrived just in time for the concert and Andrew had to go into the auditorium with black hands from the tyre.  After the performance, Andrew was called up to take a bow for his piece.  Pam went to greet him and shake his hand.   She was wearing a beautiful long dove grey dress.  I think I was the only one cringing.  Pam and Andrew were so caught up in the excitement of the moment that they didn’t notice.  Years later, Andrew apologised to Pamela and she didn’t even remember it! 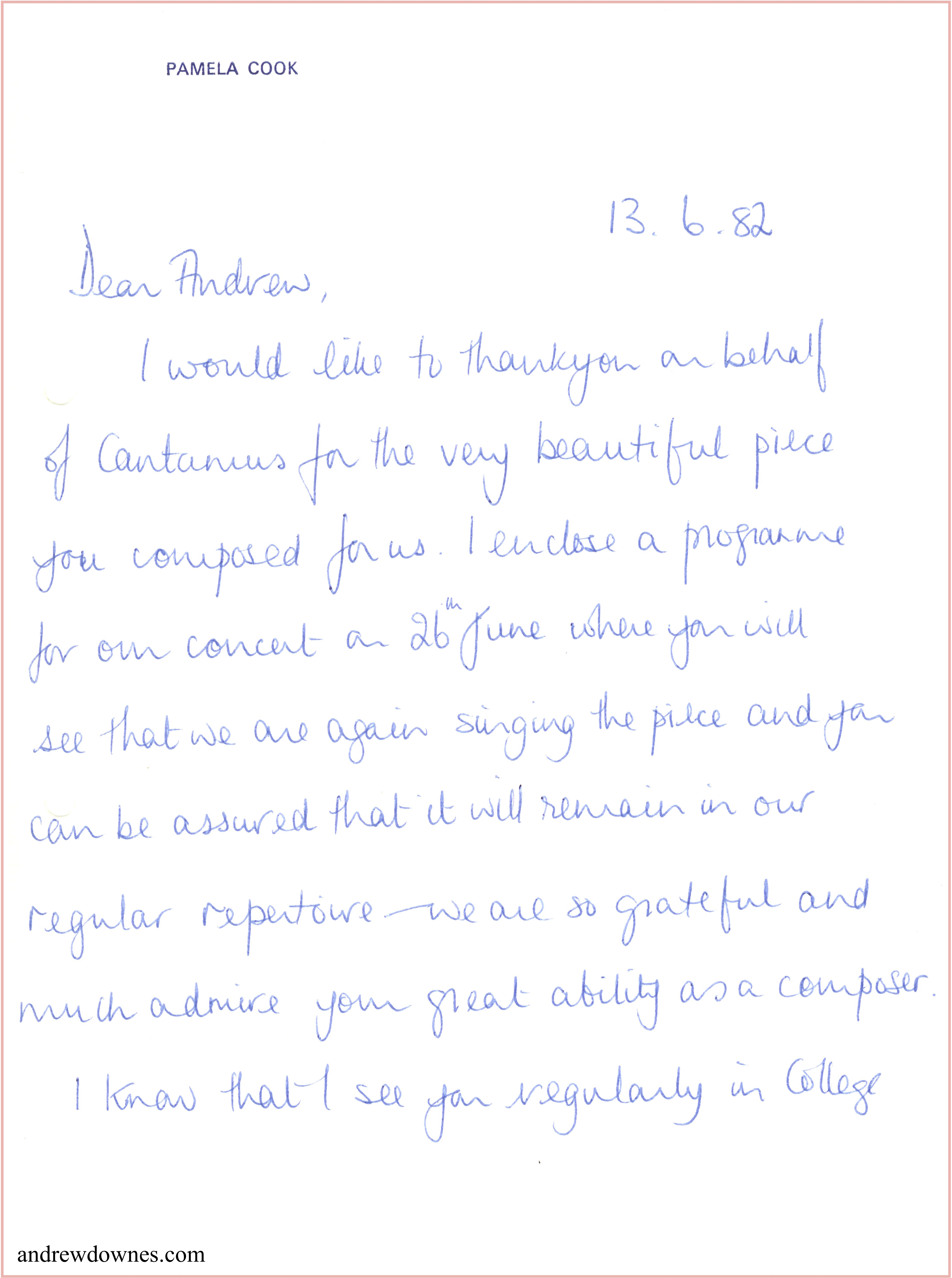 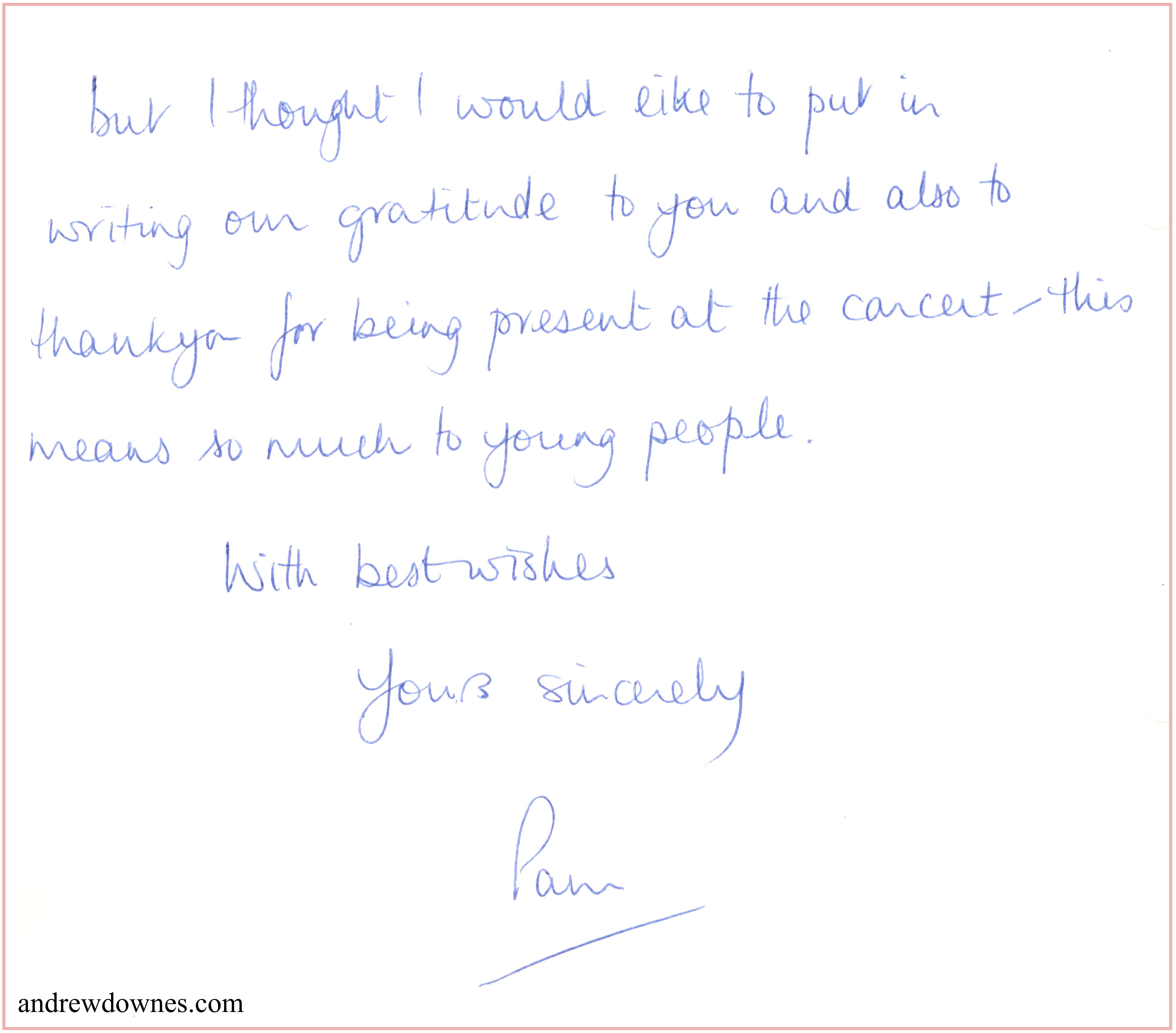 On July 11th 1982, in the Pfarre St Michael, Cantamus won first prize in the Vienna Youth & Music Festival and the City of Vienna Prize, including O Vos Omnes in their programme. 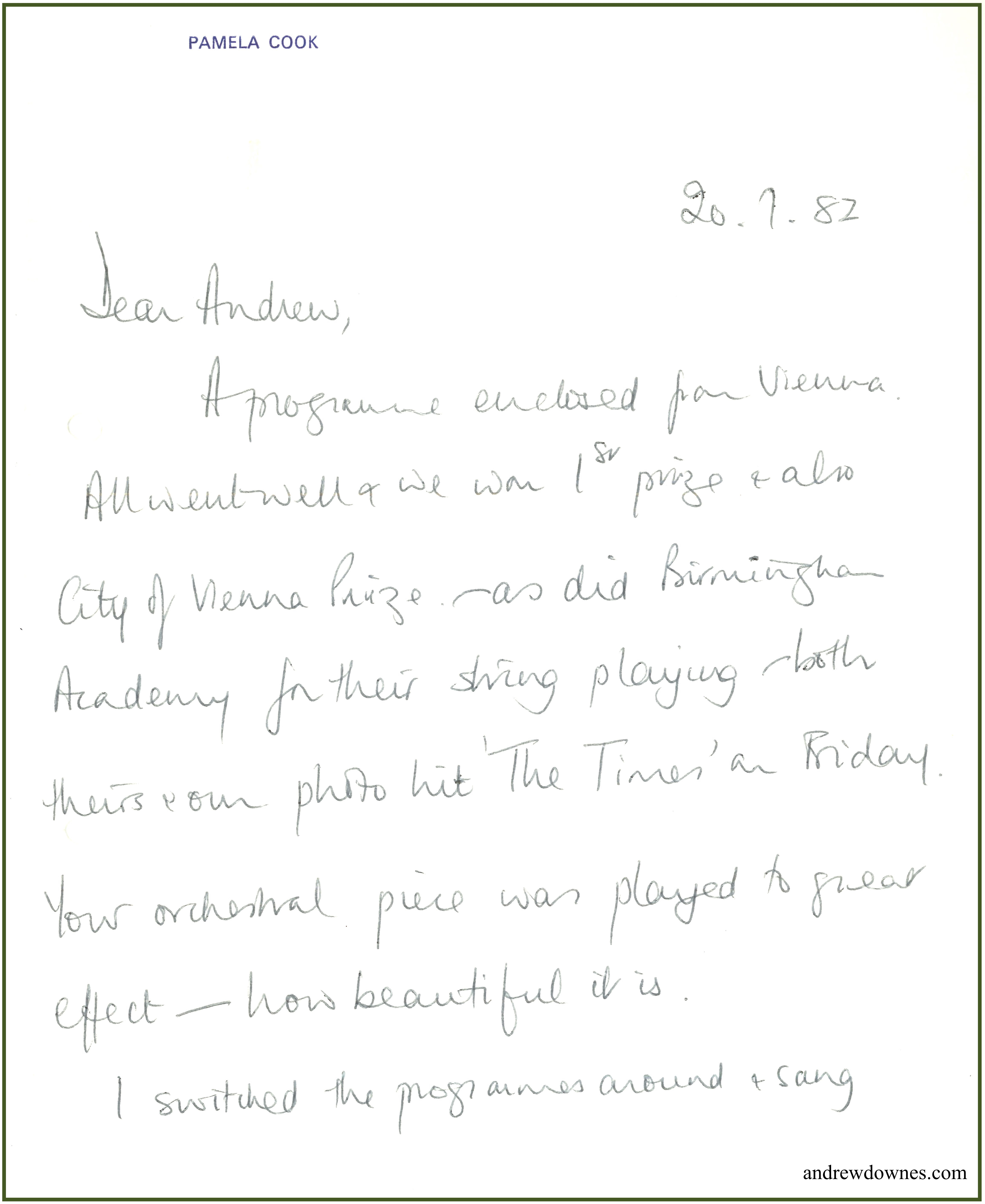 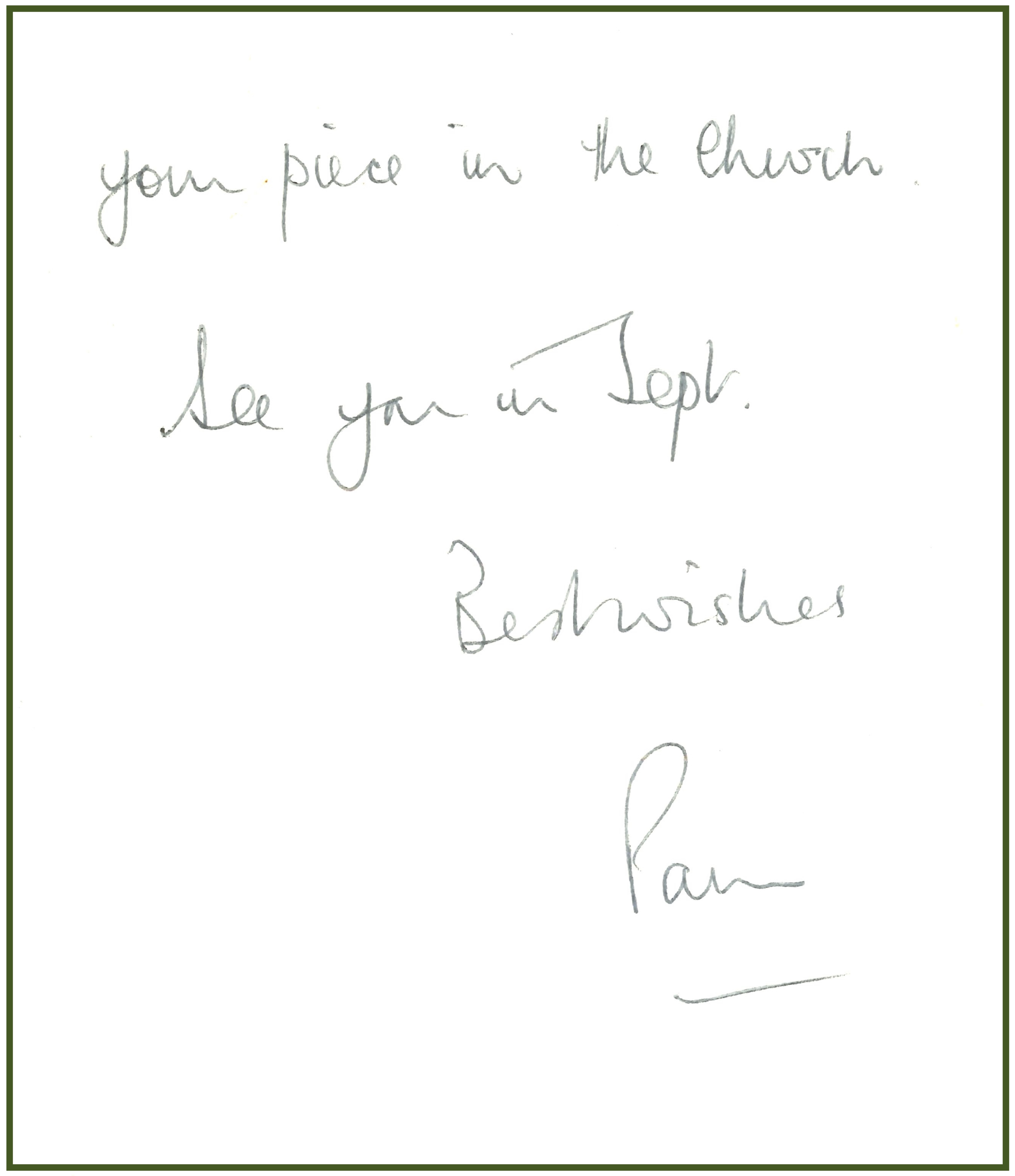 Letter from Pamela Cook after winning the City of Vienna Prize 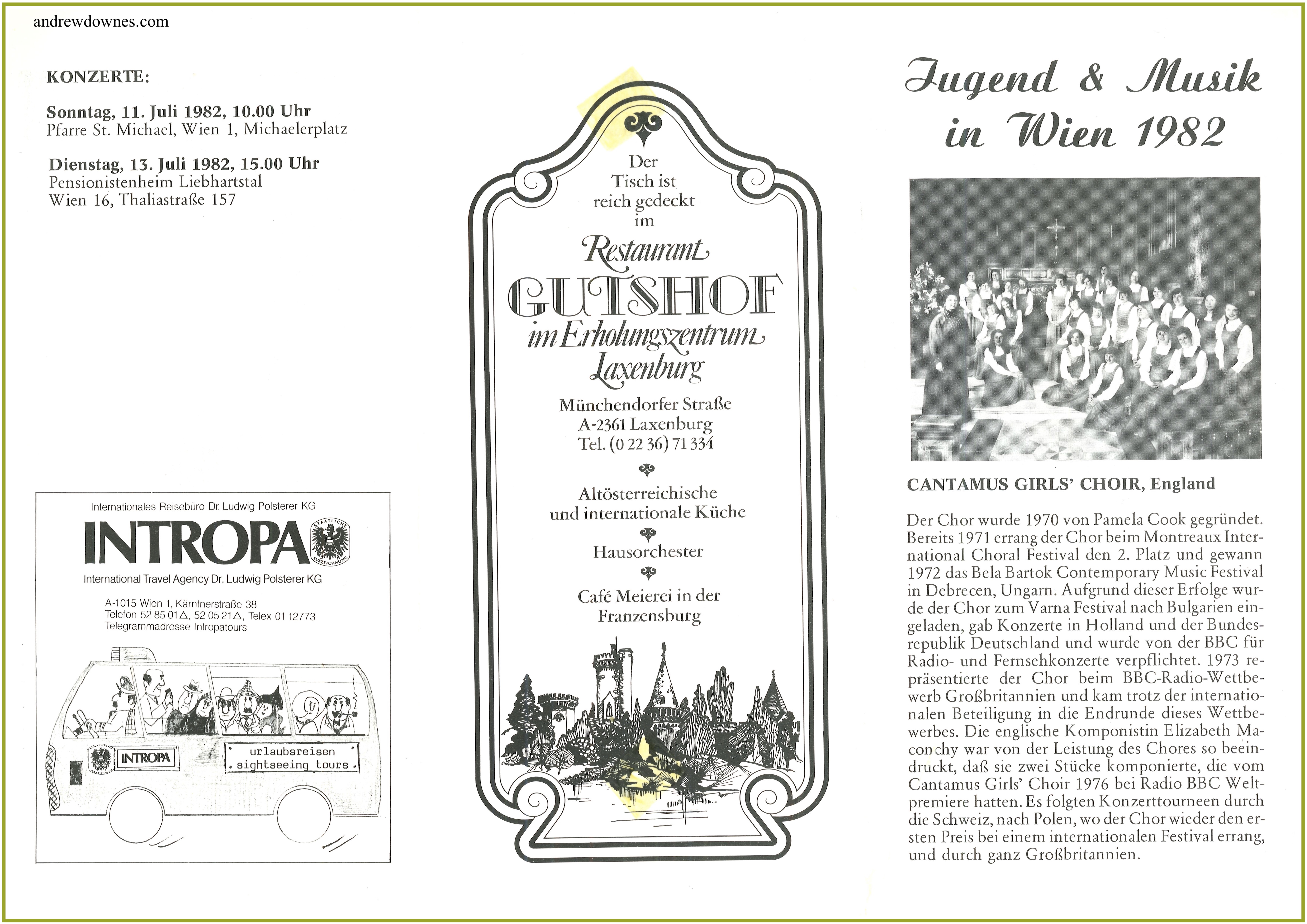 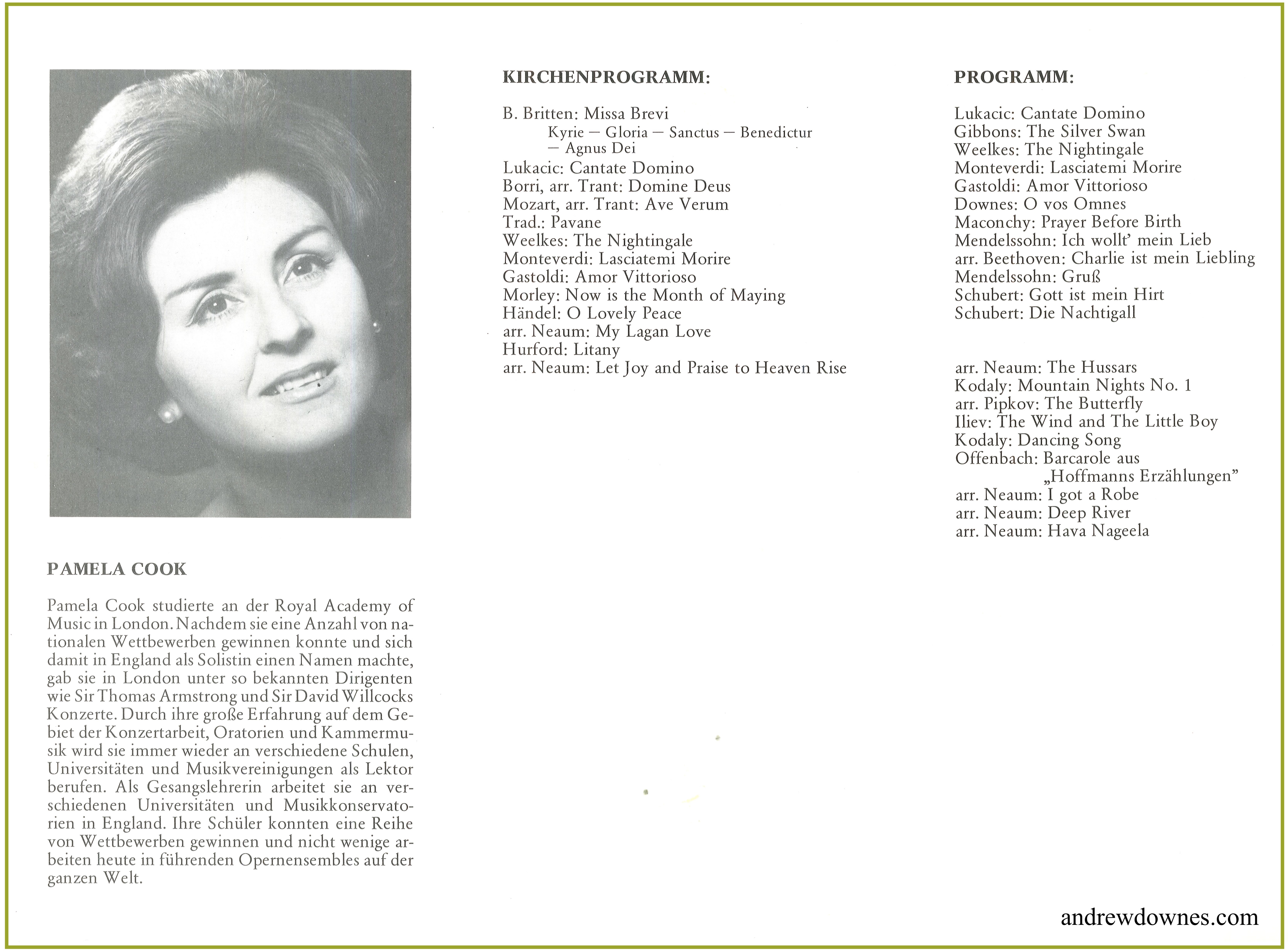 Programme for the City of Vienna Prize, 1982 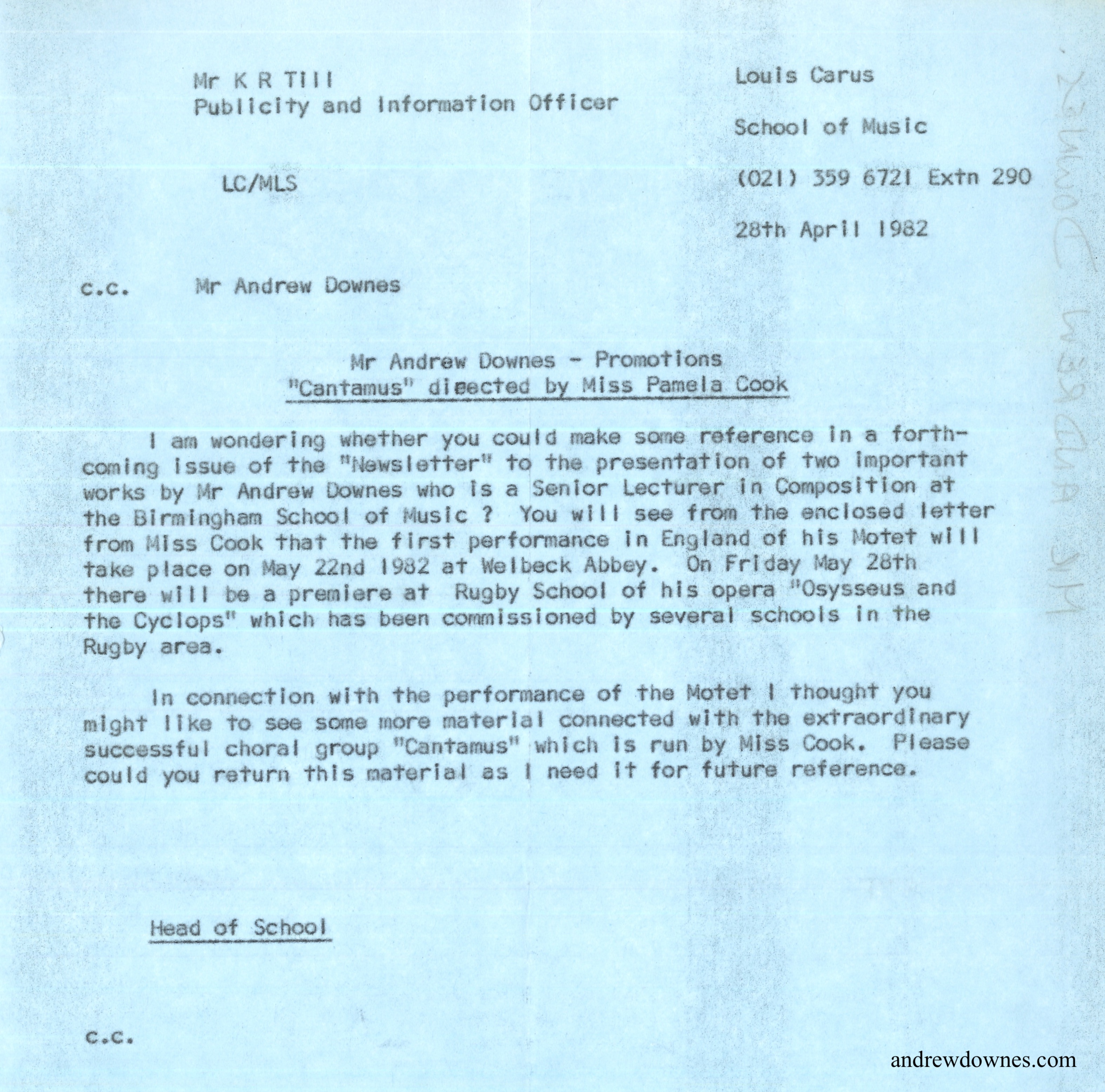 The work was commercially recorded for LP record by Cantamus in September 1982 in the Great Hall of Nottingham University, and is still regularly included in the choir's programmes home and abroad. 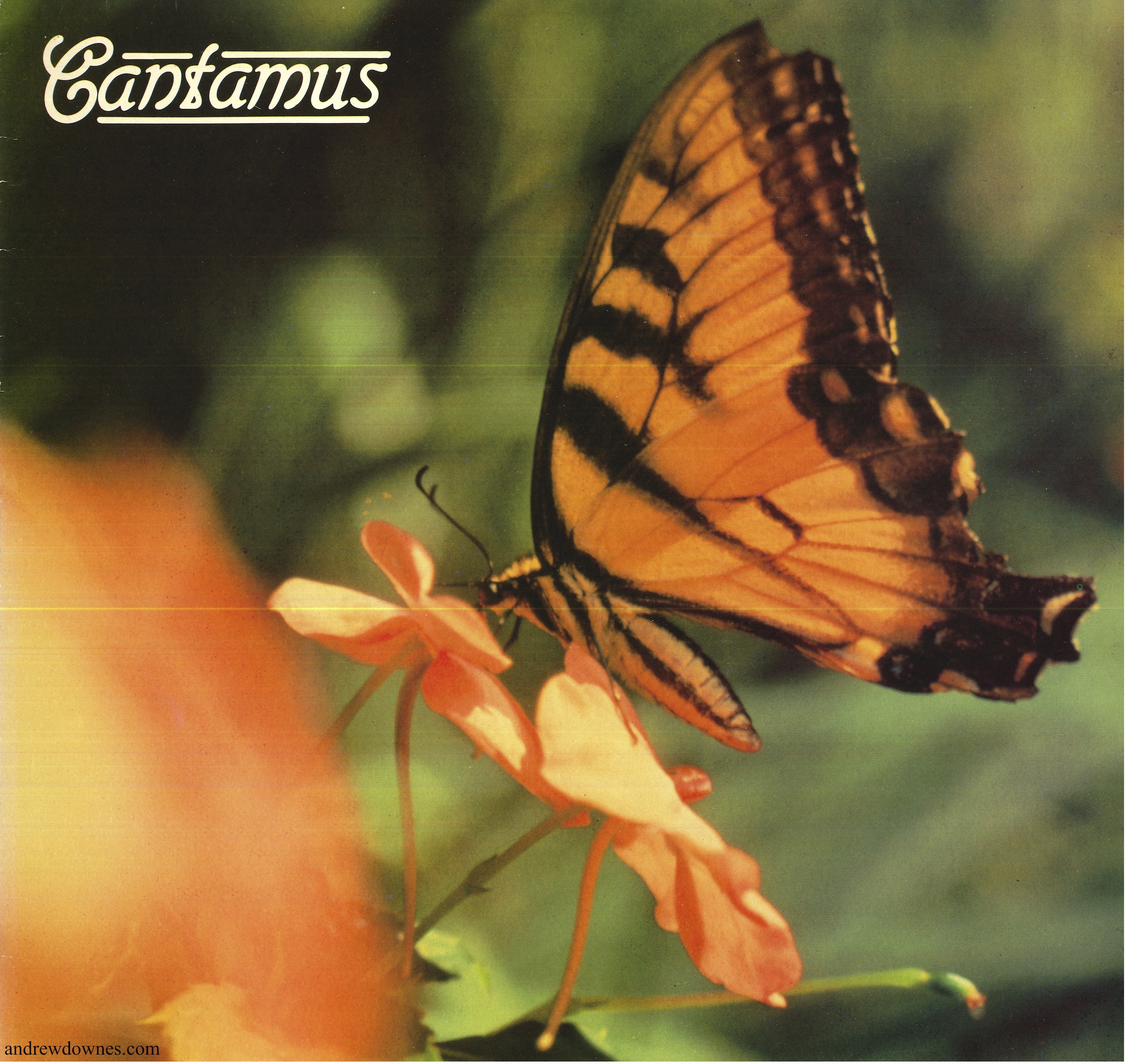 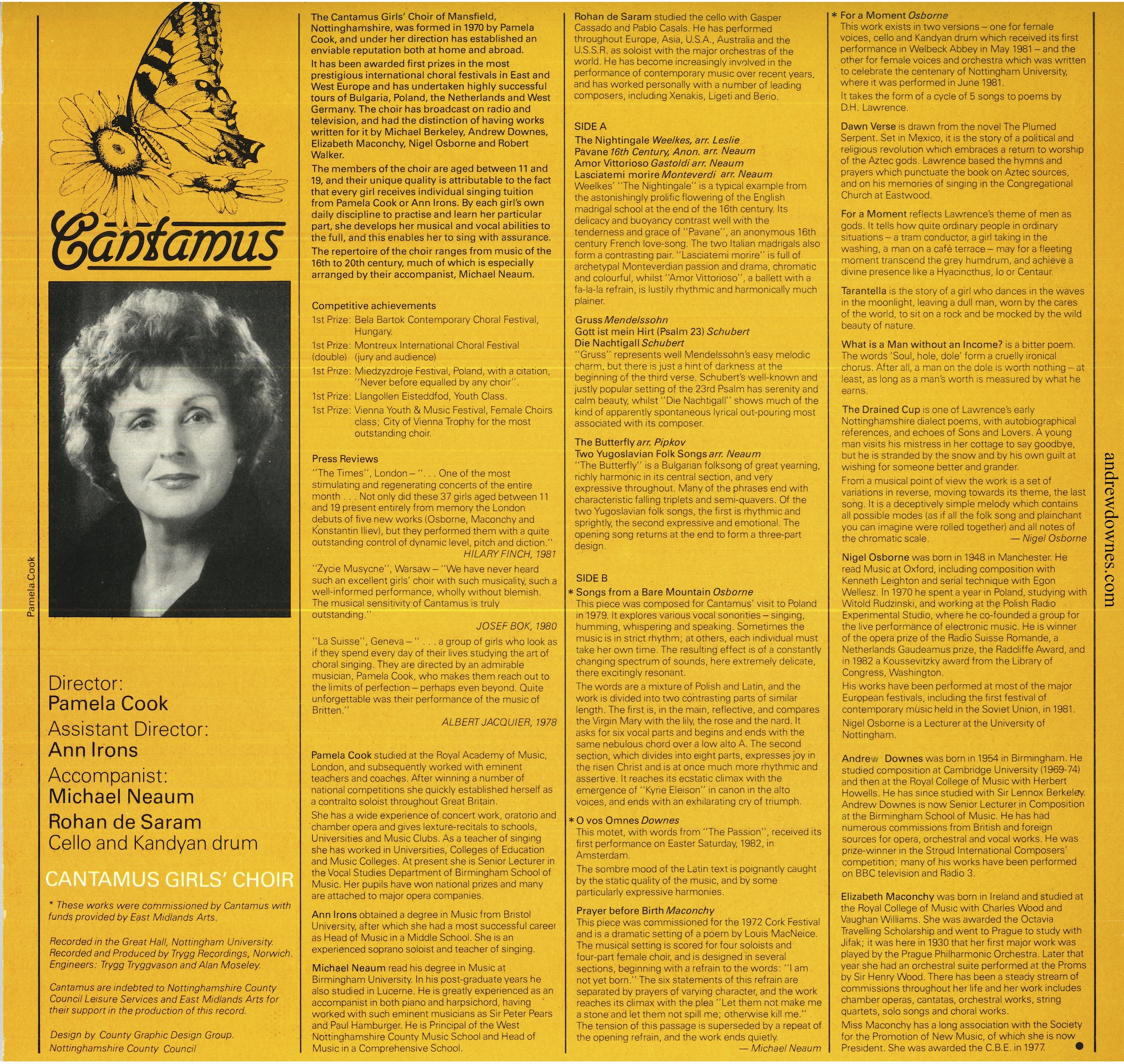 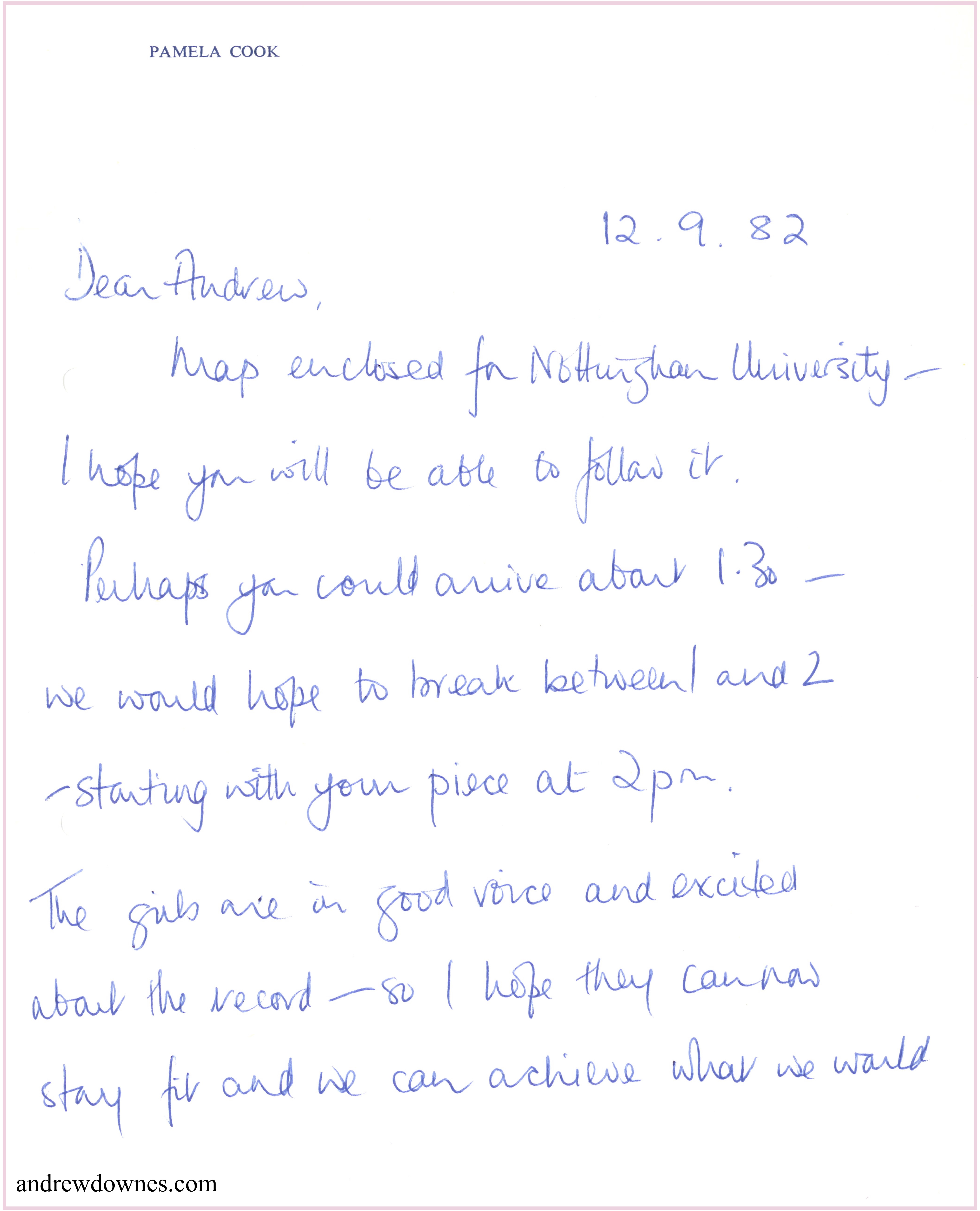 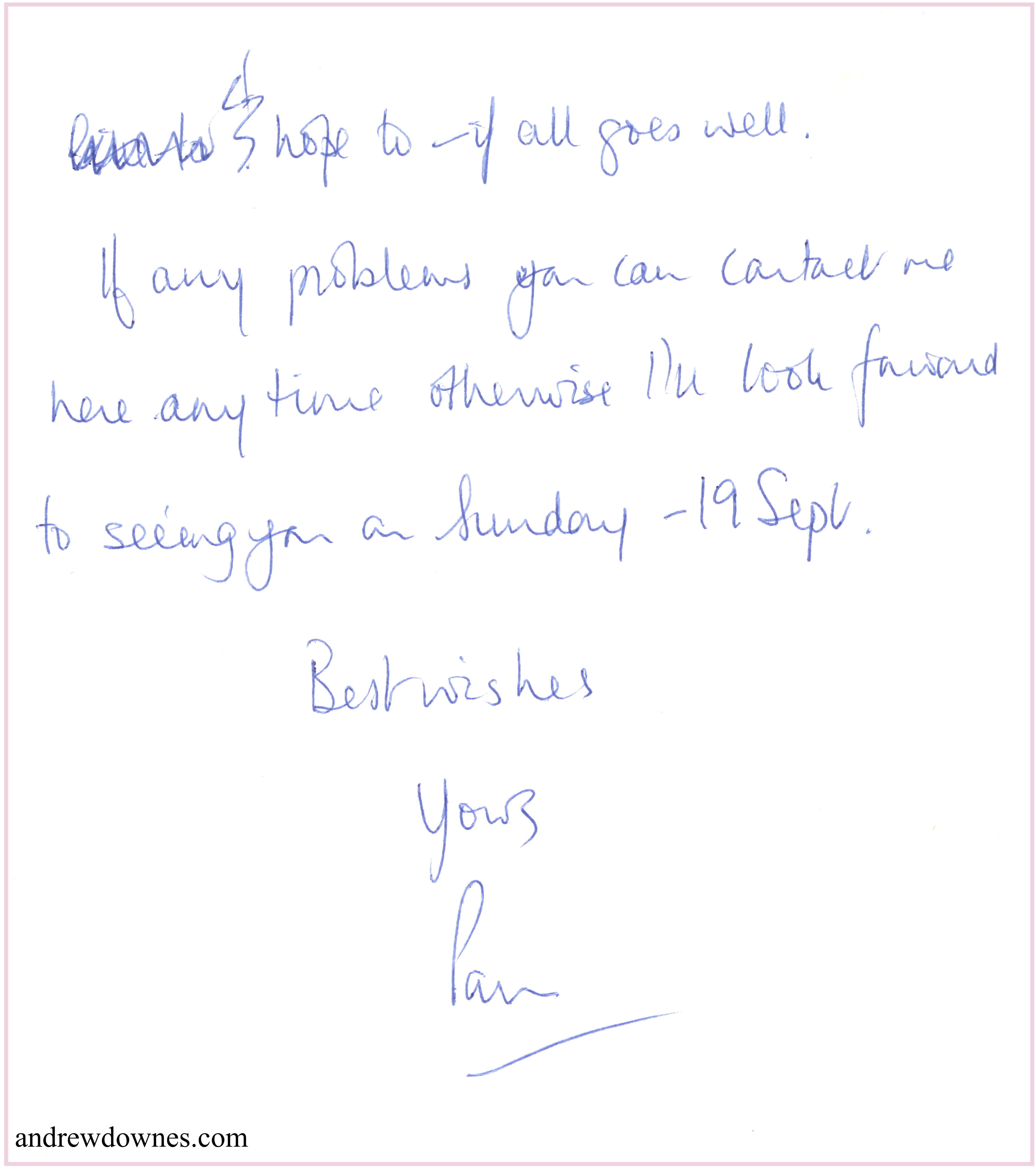 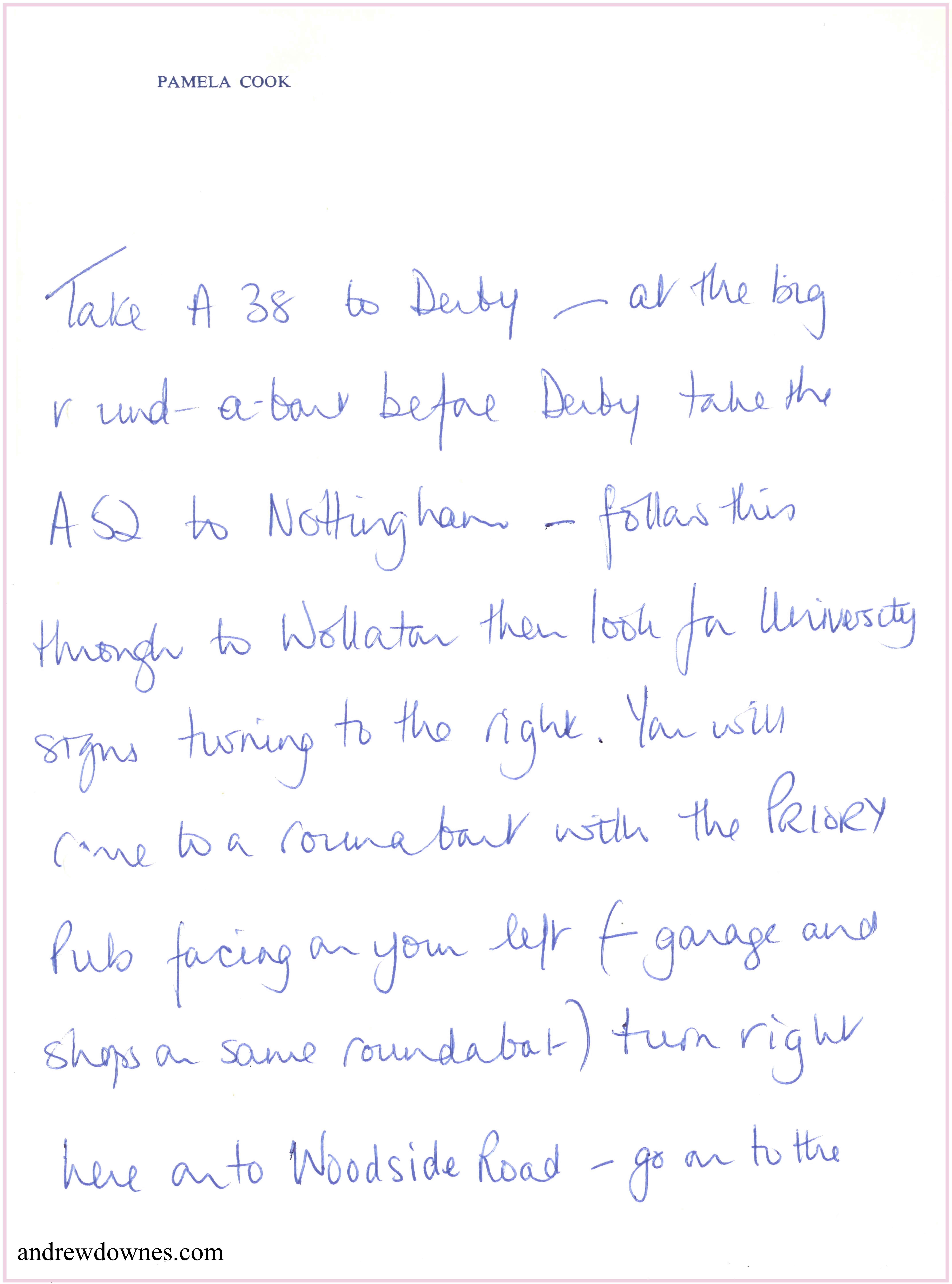 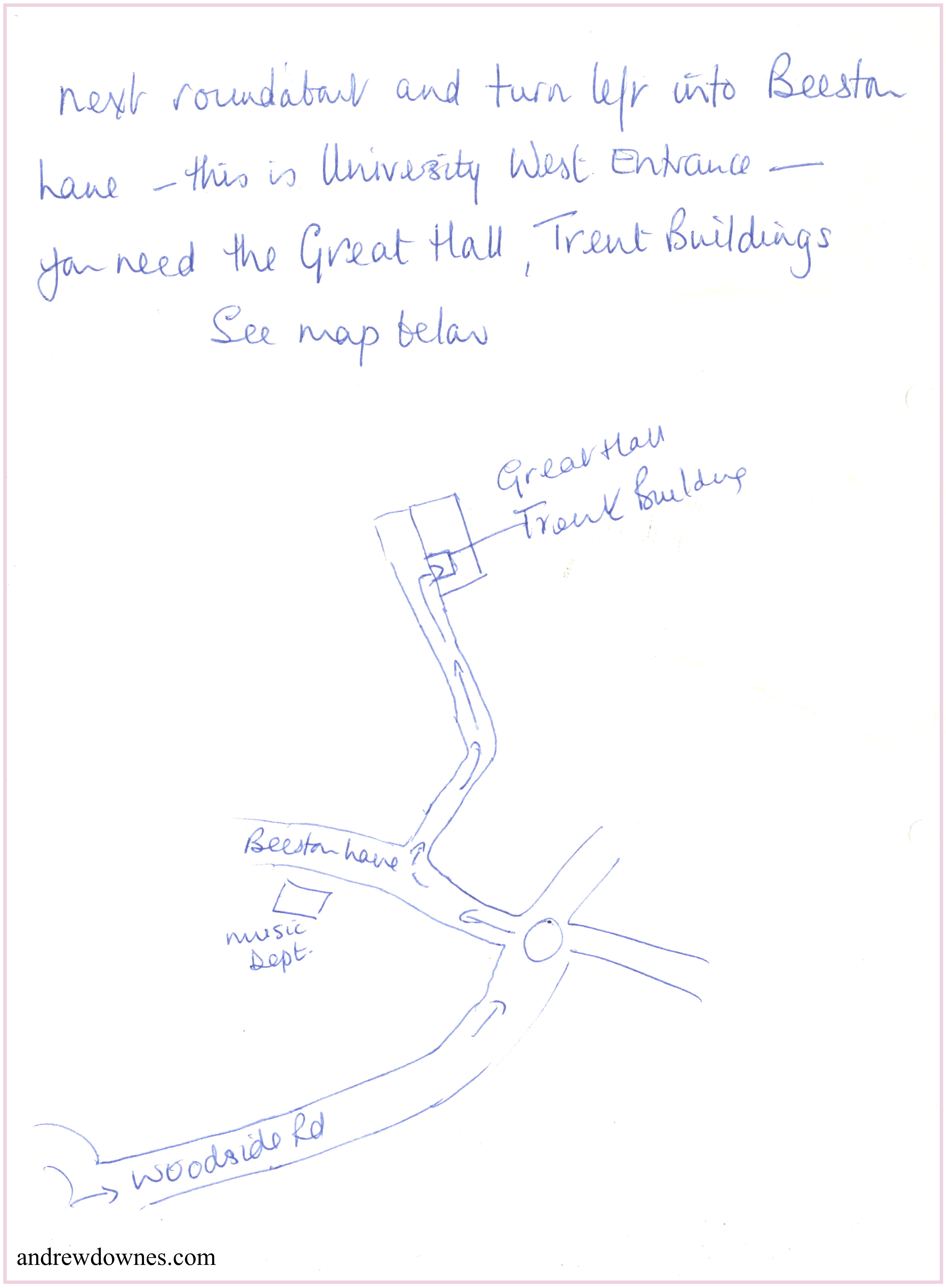 Pamela Cook later directed the Birmingham School of Music Singers in a beautiful performance of the work in the Adrian Boult Hall, Birmingham, in May 1988.

Other choirs have also taken this work into their repertoire:

The Halesowen Girls' Choir, directed by Margaret Pickford, who have also performed the work on many occasions, included it as part of their recital in the Sainsbury's Choir of the Year Competition at the Royal Northern College of Music in April 1996, winning the title of 'Sainsbury's Youth Choir of the Day' and a place in the quarter finals.

The Millennium Scholars, directed by Paula, gave the first USA performance at Adams House, Harvard University, Cambridge Massachusetts, on April 21, 2006, and a further performance in King's Chapel, Boston, Massachusetts in August 2006.  Andrew and I were visiting at the time and sang in the choir for this concert, a real thrill for me!

In March 2013, Paula recorded all the voice parts of this work and she created an animation to go with this recording in 2016. The recording took place in the Studio of Birmingham Conservatoire.  Matthew O'Malley was the recording engineer.

In April, June and November 2017, the Cantabrigians performed O Vos Omnes as part of their recitals in the Chapels of Churchill College, Jesus College and Selwyn College, Cambridge. 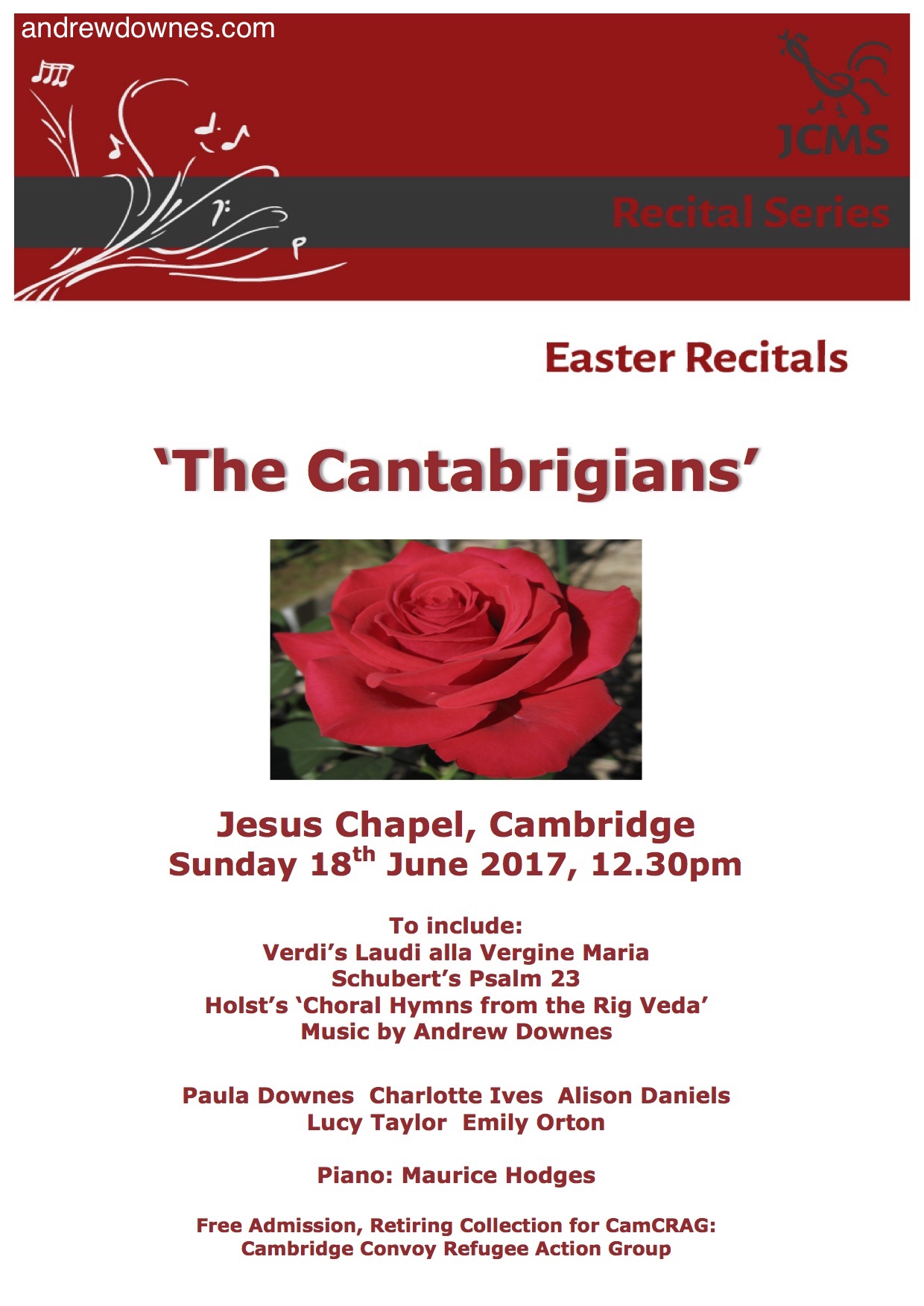 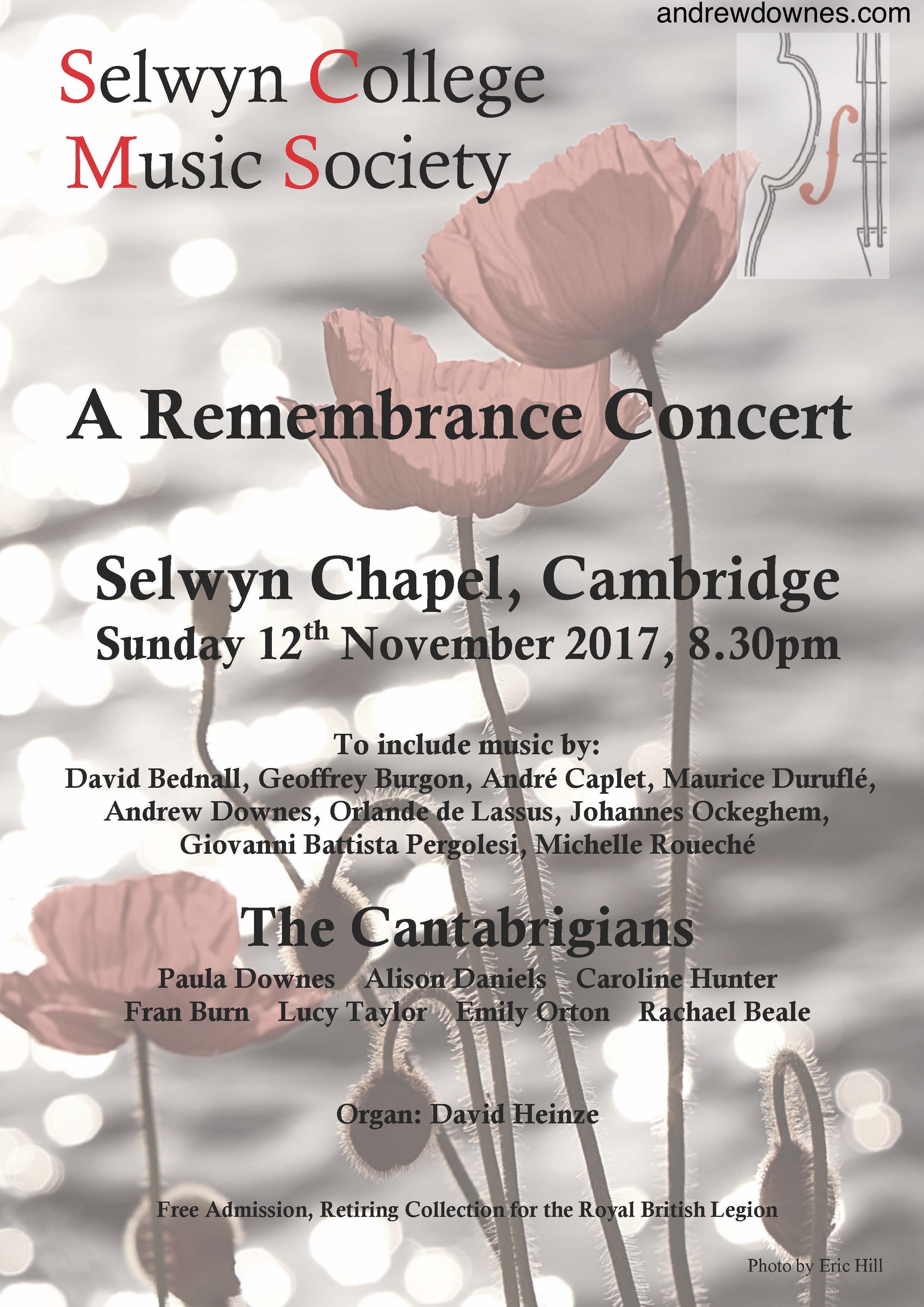 In May 2018 the Cantabrigians performed the work as part of their recital in the OCR of Trinity College Cambridge. 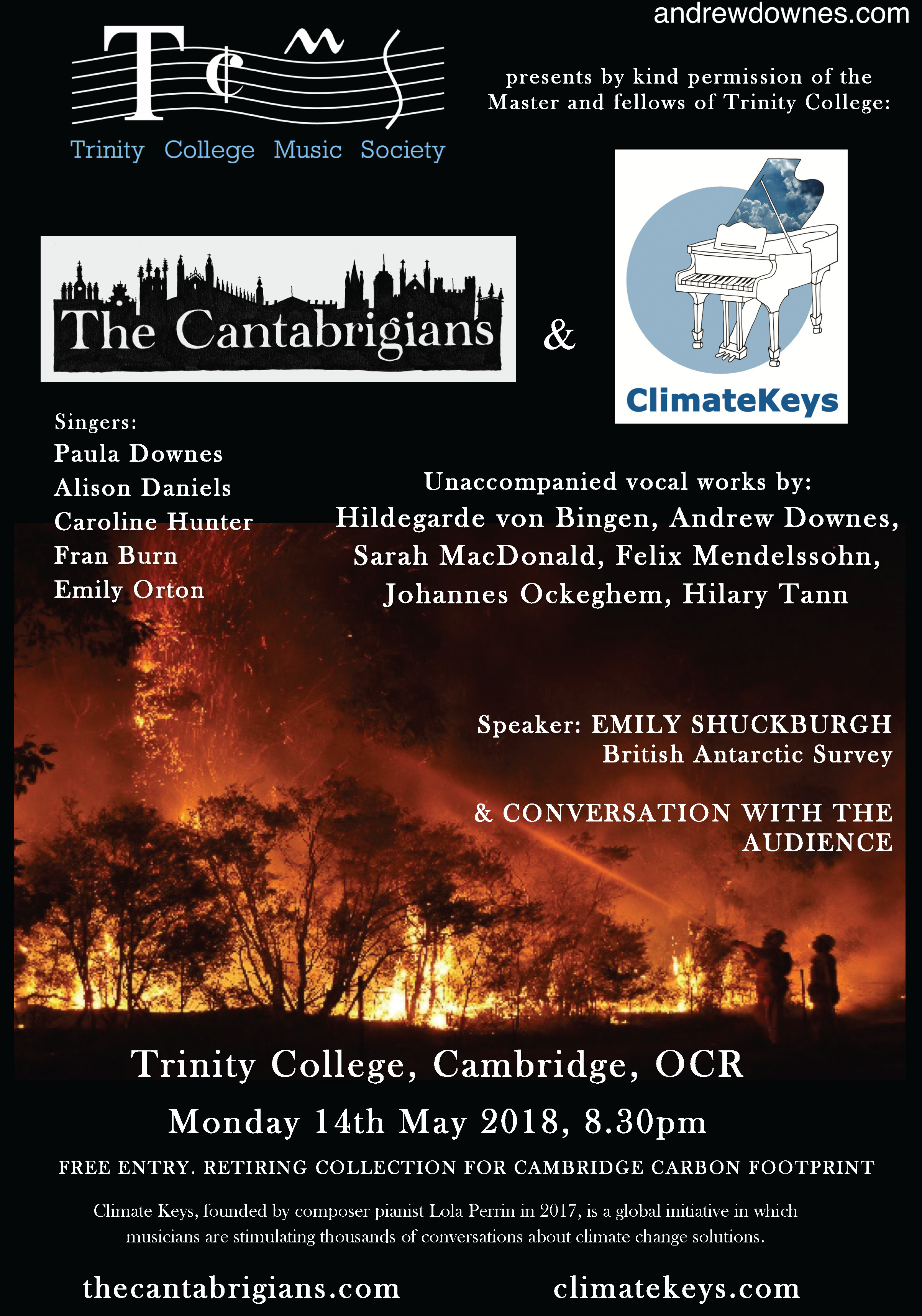 During Andrew’s 70th birthday year, in April 2020, Paula’s animation of the work was broadcast online.

O Vos Omnes is now published by Faber Music in their anthology: 30 Sacred Masterworks for Upper Voice Choir.  We decided to accept when Faber, on Pamela Cook's recommendation, offered Andrew a place in this prestigious anthology, because Faber's distibution networks are far greater than ours.  I had to proof read the Faber typesetter's work, which I found quite nerve-racking!

Pamela Cook and her 'Cantamus' Girls' Choir needed a work requiring exceptional technical skill for the Sainsbury’s Choir of the Year Competition. With funds from Nottinghamshire County Council, they asked Andrew to provide a virtuosic piece. Andrew’s work divides into 8 parts and contains multi-tempo techniques. When Pam first saw the piece, she shied away from it and the choir didn’t perform it.

In March 2013, after typesetting the work, Paula recorded all the voice parts of this work and she created an animation to go with this recording in 2017. 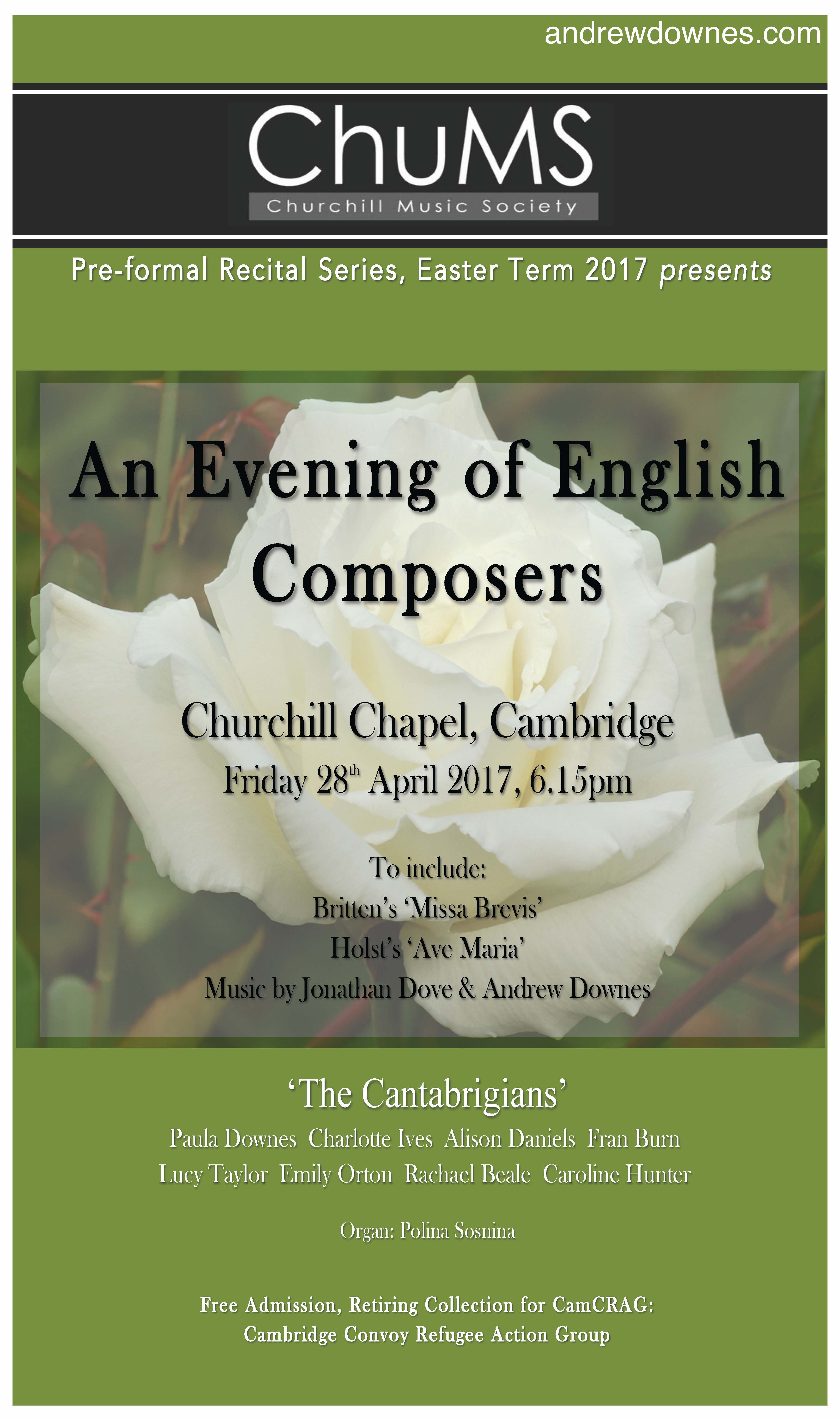 GIBRALTAR, OUR HOMELAND
For unaccompanied vocal soloist and 3 part SSA choir.
Both words and music by Andrew.
More info

This anthem's beautiful tune was first composed by Andrew as part of his stunning third symphony.  The anthem was recorded by Halesowen Girls' Choir in July 1994. Andrew sang the solo verses himself and Anna, Paula and I sang with the choir. The anthem has been  included as part of the choir’s repertoire ever since. Notable performances by the choir have been at a special 'Downes Towards the Millennium' concert in September 1999 in St John's Church, Hagley, Worcestershire, and at a Millennium Concert, entitled 'Music from around the World', in October 2000, in Hagley Free Church, Worcestershire.

The USA premiere of the anthem was given on 24th June 2007 at First Parish Church, Cambridge Massachusetts, by Schizophonic: Paula Downes, soprano, Anney Gilotte, soprano, and Allegra Martin, mezzo-soprano.

In March 2013, Paula recorded all the voice parts of this work and created a music video in 2016. The recording took place in the Studio of Birmingham Conservatoire.  Matthew O'Malley was the recording engineer. 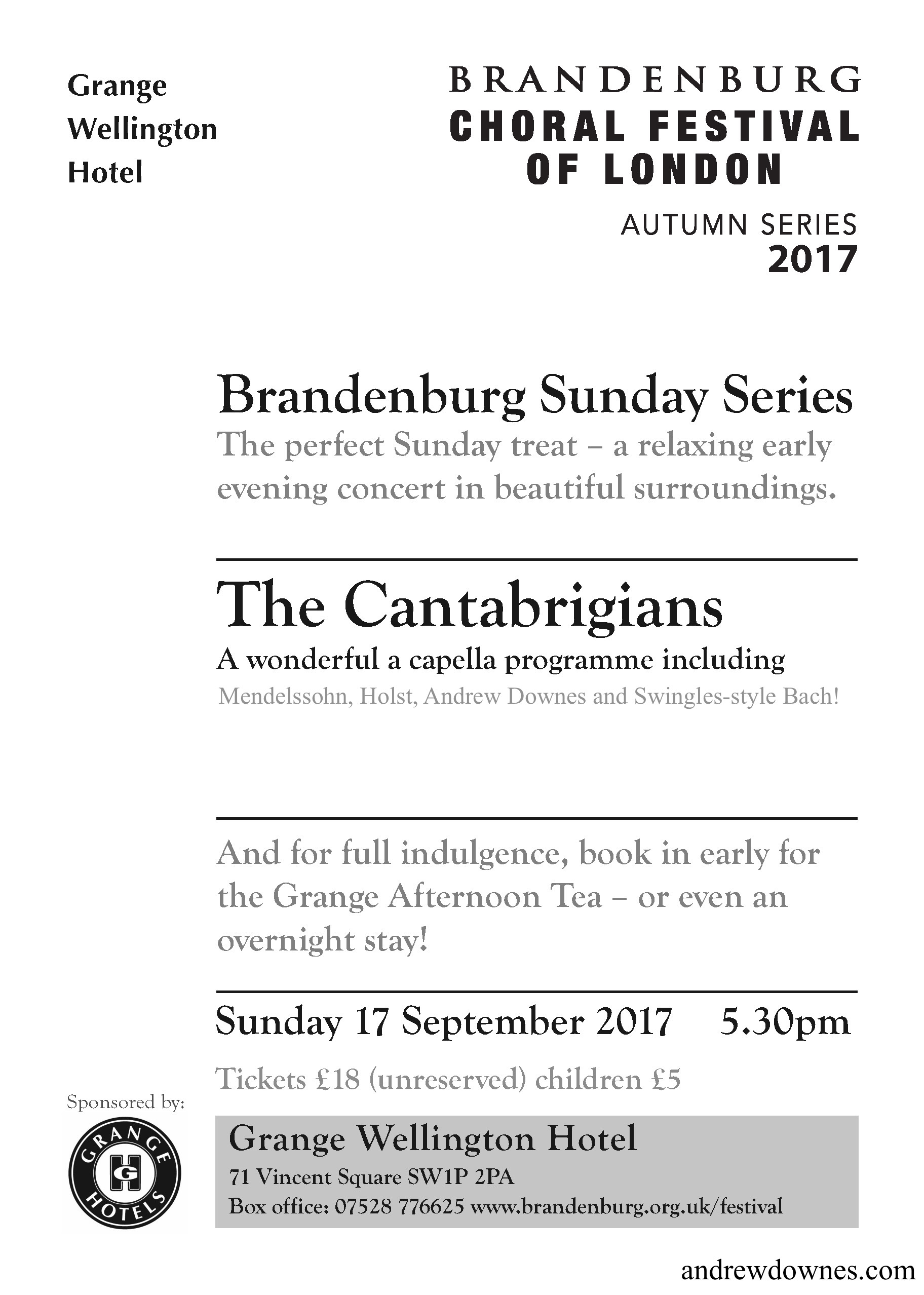 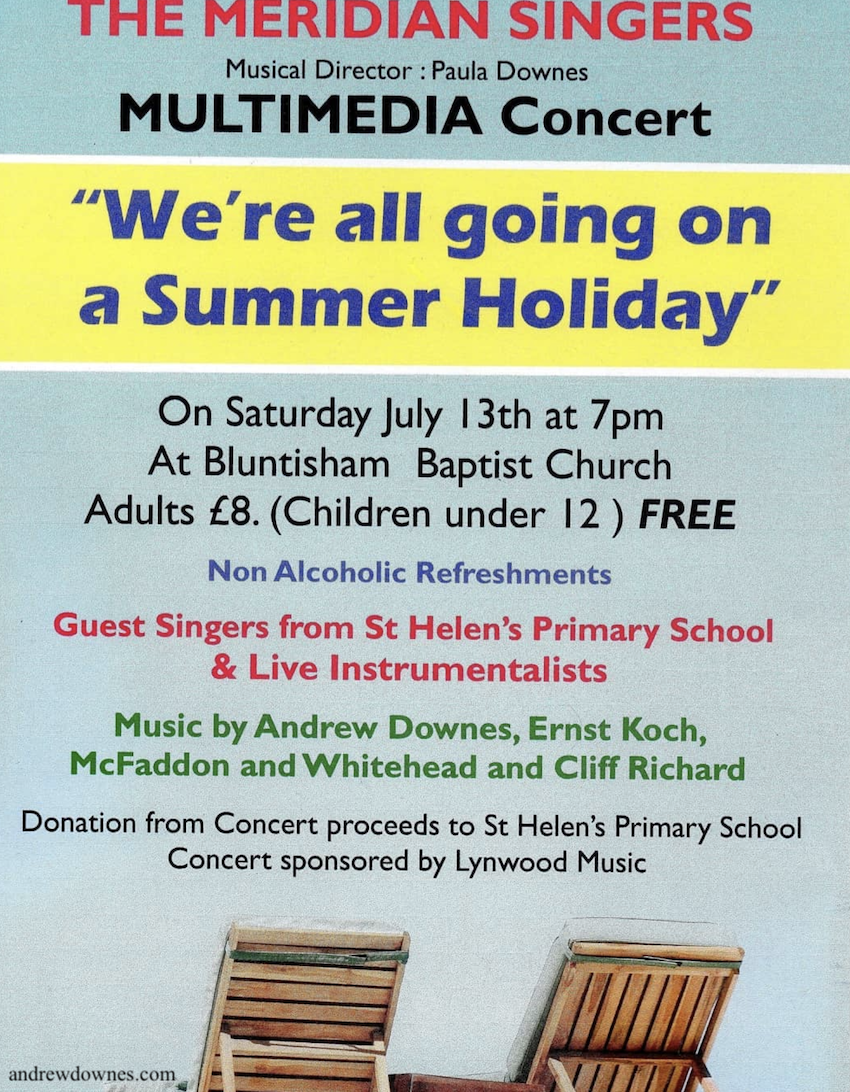 During 2019 Paula wrote new words and gave a new title to this Anthem, World Anthem.  With her 2 young daughters and her husband, Paula created a video performance of World Anthem, using photographs of Extinction Rebellion's Red Rebel Brigade. Paula posted the video online on 3rd September 2019.

In October 2019, in the Church of St John the Baptist, Somersham, Cambridgeshire, the Meridian Singers, directed from the violin by Paula, performed the work again, this time with the new words by Paula and entitled World Anthem. The anthem was accompanied by Joshua Cusworth (trumpet), David Cammish (bass guitar) and Olga Elbourn on keyboard. 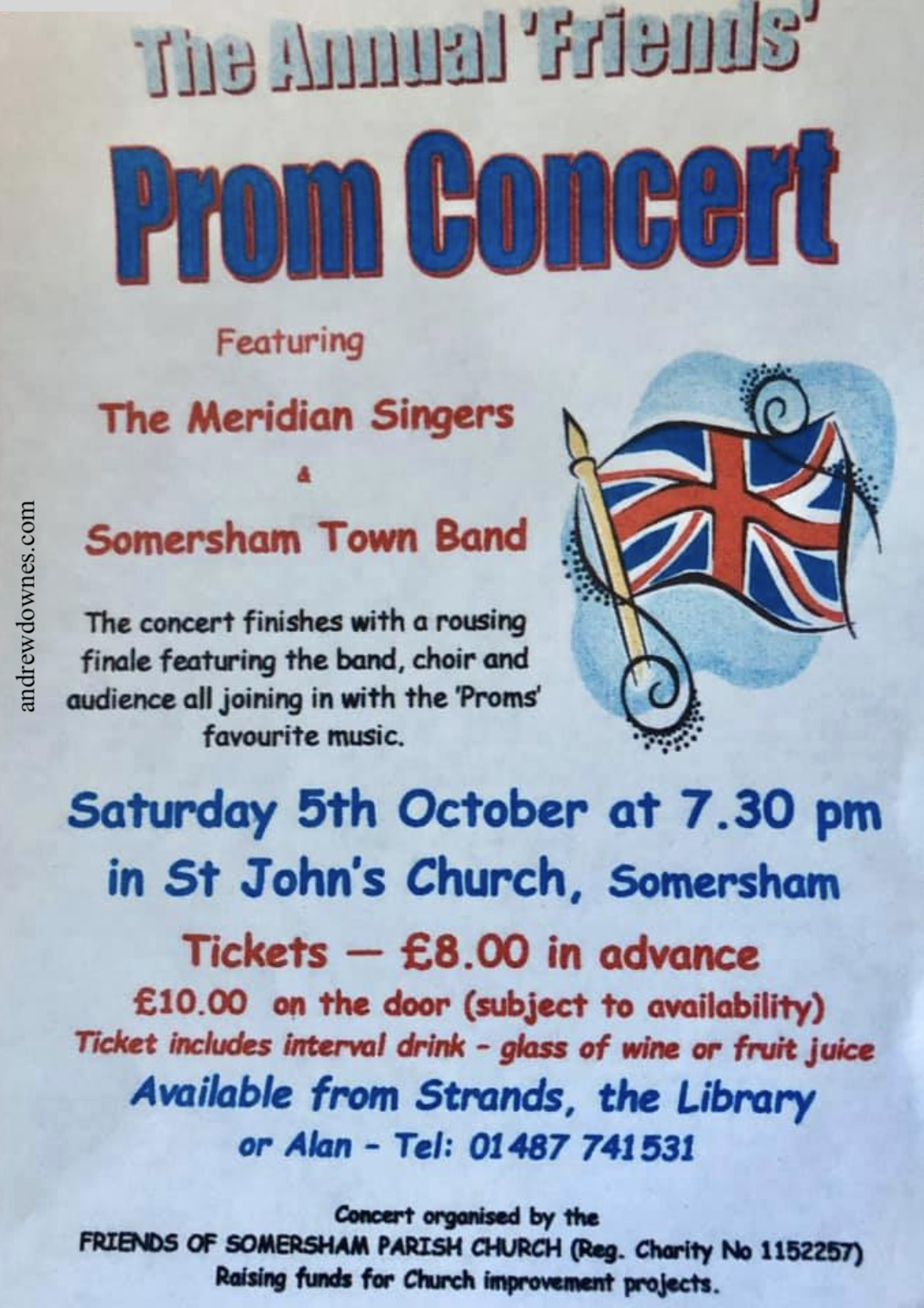 World Anthem was again performed by the Cantabrigians in a concert entitled 'Our Planet' in the St Clements Church Cambridge Lunchtime Recitals series in January 2020, as part of Andrew’s 70th Birthday celebration year.  In the spring of 2020 Paula created an online choir recording of World Anthem, with vocal and instrumental contributions from family and friends from 5 years old to senior citizens.  I was very pleased to contribute towards this and Andrew did too!  The video recording was first broadcast online during the Coronavirus lockdown on May 4th 2020.

WIND SONG (adaptation of 'What shall I do to show how much I love her', originally for Male Voices)
More info

'Wind Song' sets a Native American poem in English Translation and comes in two versions: the first can be sung by high or low voices, or with solo Soprano or Tenor and string quartet. Paula arranged this version for performances with the 'Silver Swans' in Cambridge for Climate Change concerts in 2018/19.

The second version can be sung by Alto or Baritone Solo with SSAB Choir. Paula was planning to conduct the Meridian Singers performing this version with baritone Rob Freak in March 2020 for a concert about climate change, which sadly had to be cancelled due to Covid-19. 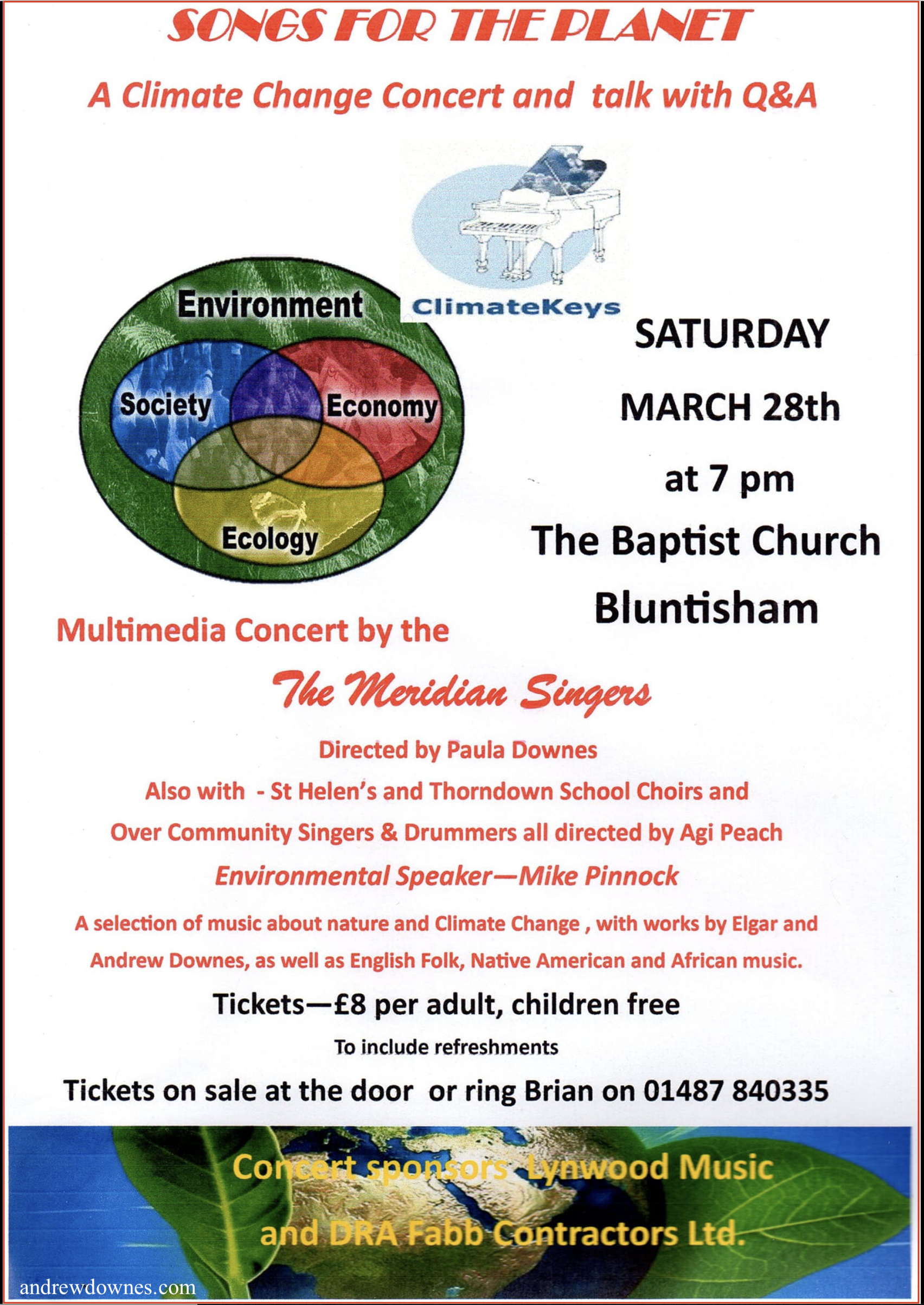 During the Covid-19 lockdown, Hagley Community Orchestra and Singers conducted by me, created an online multitrack performance of Wind Song as part of the Music for Sanctuary online concerts series, raising funds for the homeless. The performance was put together and posted online by our daughter Anna in July 2020, in celebration of Andrew’s 70th birthday year.

Wind Song is included in our educational resources on  Native American Culture.

This setting was composed by Andrew for the Cantabrigians, for their Evensong services and concerts.

The work has been recorded by Paula, singing all parts (multitrack recording), and can be heard on Soundcloud.  Paula created  a video to this recording and posted it online on May 31st 2020, during Andrew’s 70th birthday year.