Works for Piano and Orchestra:
Part 1 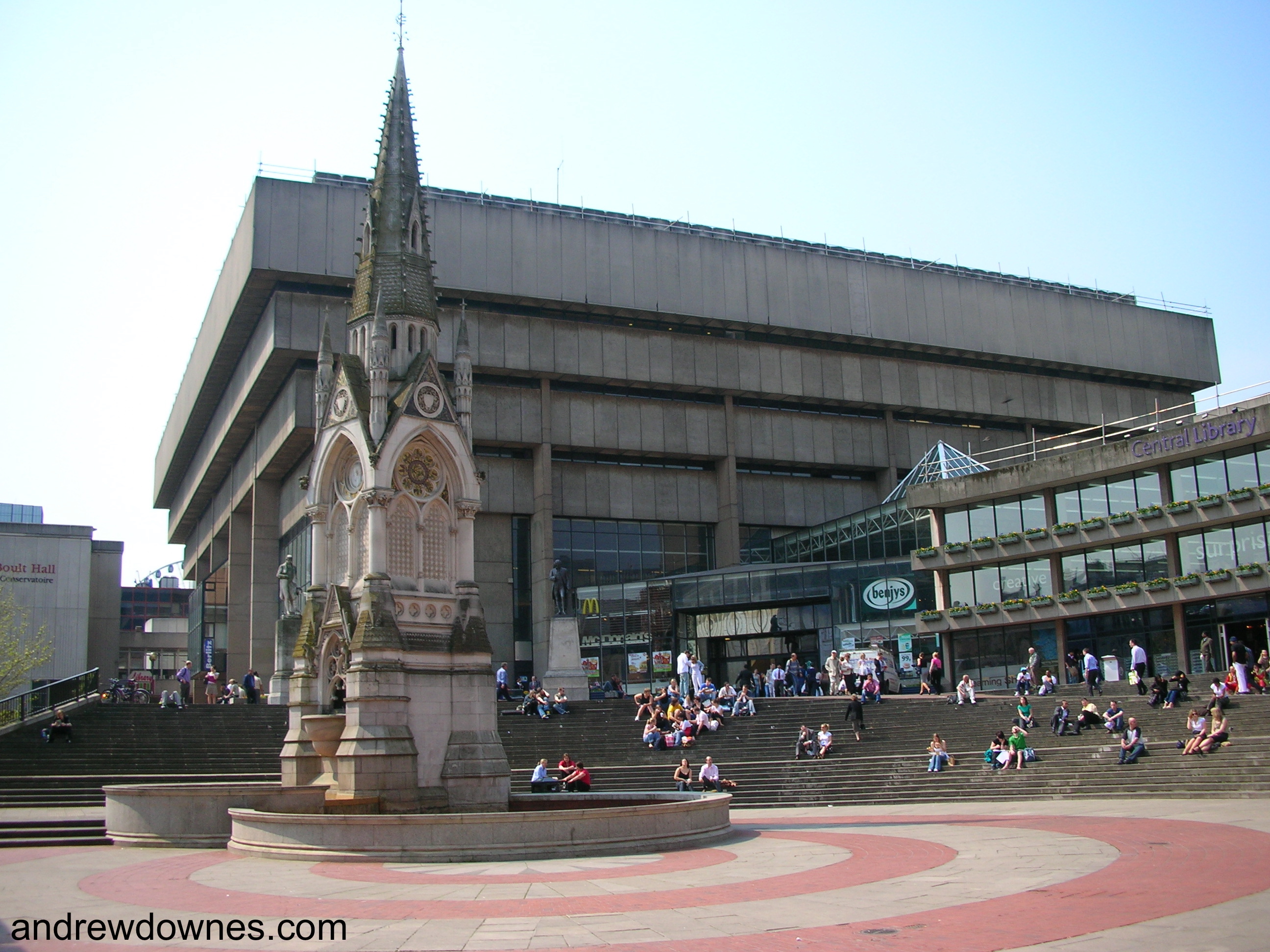 Old Paradise Forum outside the former Birmingham School of Music, where Andrew Downes' Five Movements for Piano and String Orchestra was premiered. (Photo by Oosoom)

An account by his wife and publisher, Cynthia Downes, posted on October 2nd, 2018

One of the first works which Andrew wrote after our marriage was his Five movements for Piano and String Orchestra, which he composed when we were living in our first home in Lynwood Drive, Blakedown, Worcestershire.  I was bowled over by how original and beautiful this work was.  Andrew completed it in 1976.  I have always loved these 5 Movements and am always elated each time they are played.

At the premiere I sat recording the performance on a small Sanyo cassette player which I had on my lap, and holding an external microphone as still as I could.  After many years I got this cassette converted to CD and sent it to our daughter, Paula, who put it on SoundCloud.  I am delighted that the hiss on the cassette has been eliminated to a large extent, leaving intact the fabulous interpretation of the gorgeous triplet motif in Movement 3,

and the exciting double basses leading into the final canonic flourish at the end. 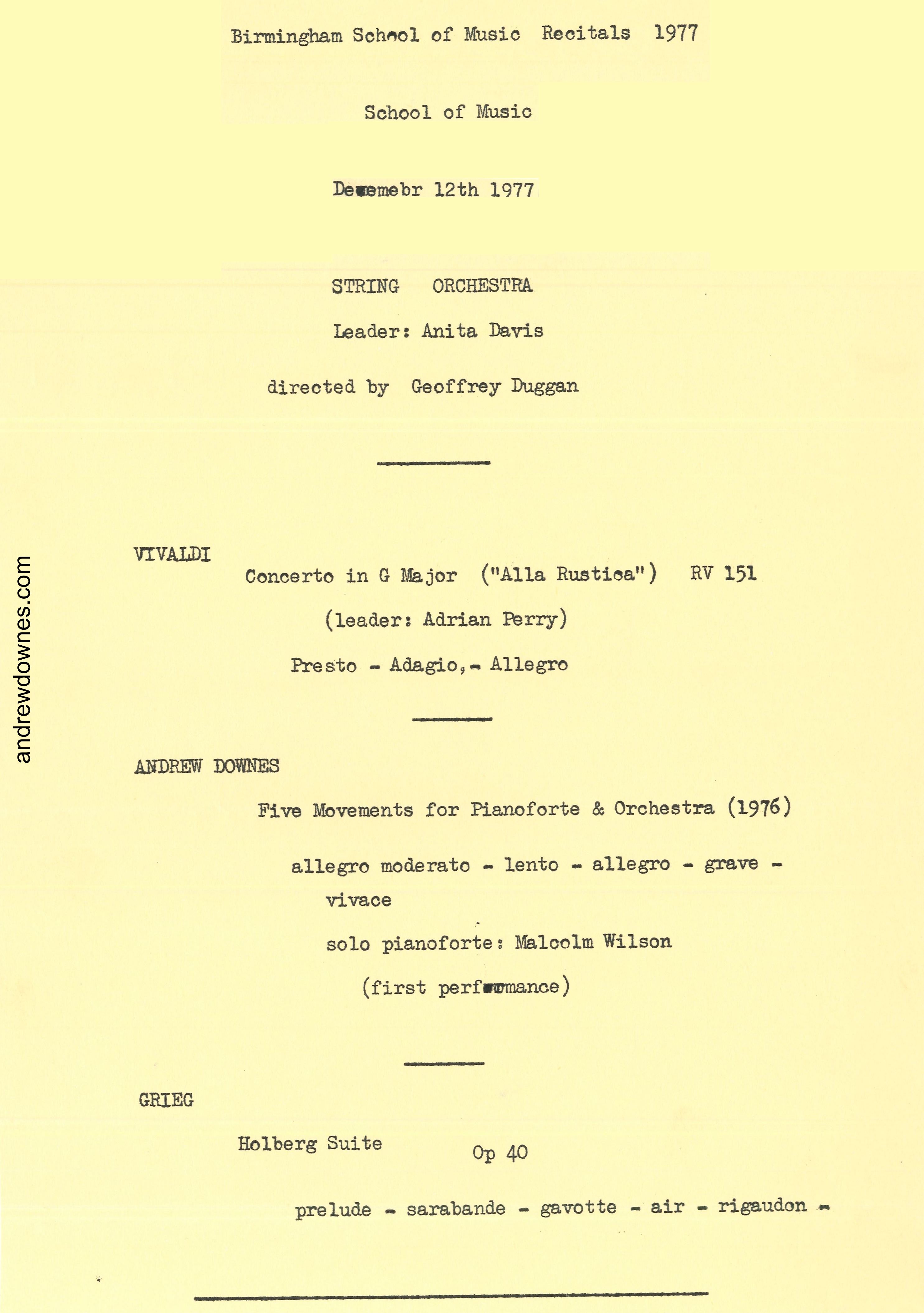 Programme from the premiere

We were delighted when the review by Barrie Grayson appeared in the Birmingham Post next Day: 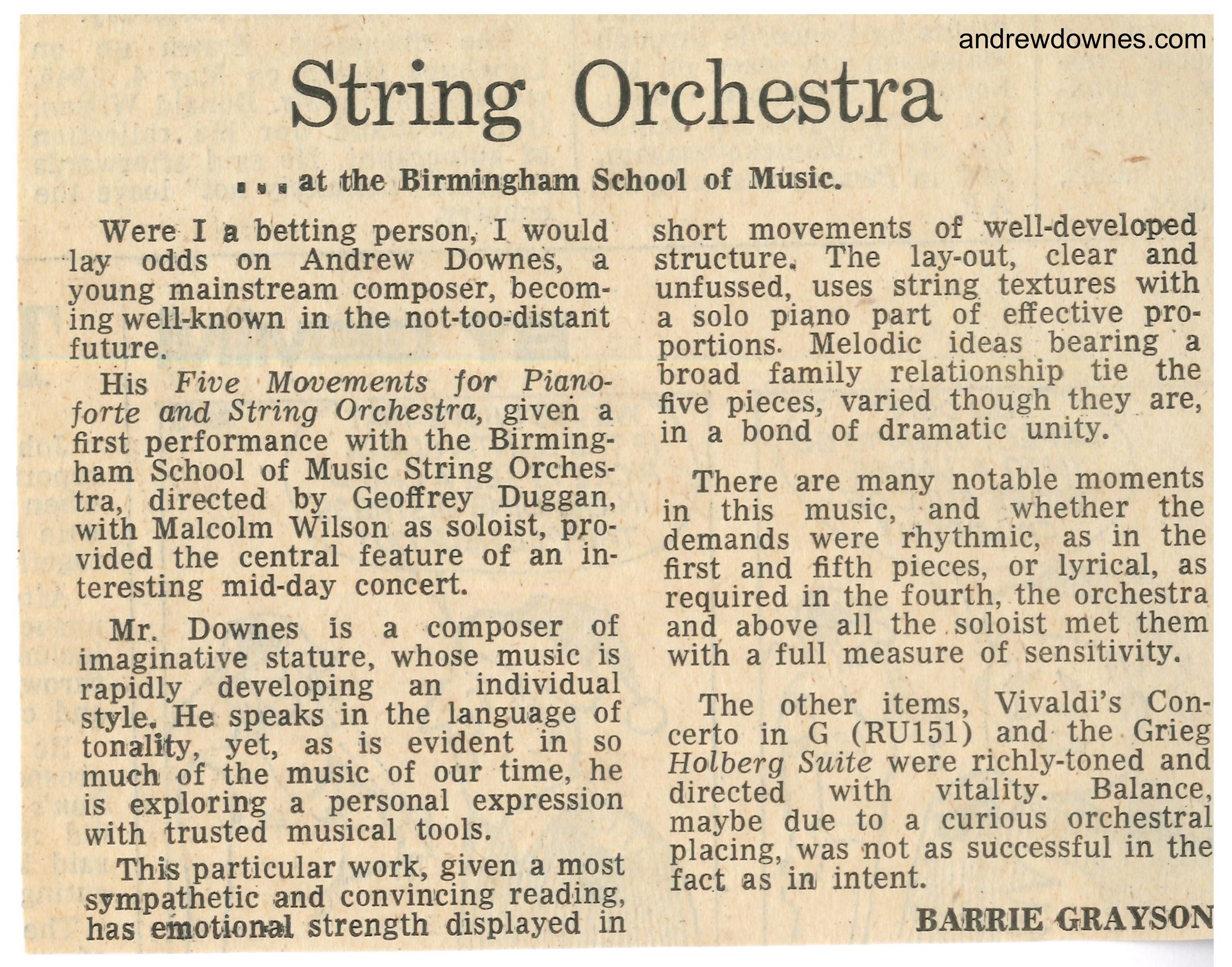 In 1991 Andrew was invited by the new Principal of Birmingham Conservatoire, Dr Kevin Thompson, to set up the new School of Creative Studies there. Kevin introduced Andrew to Indian born composer, John Mayer, whom he suggested could be appointed as Composer-in-Residence in the new School. Andrew was immediately taken with John's immense knowledge and enthusiasm, and the 2 worked well together. John (who was also a violinist/violist), with his British born wife, pianist Gillian Mayer, gave the Indian premiere of Andrew's Sonata for Violin and Piano at the Calcutta School of Music in 1994. John and Gillian also introduced Andrew to violinist, Alla Sharova, who also performed the Violin Sonata and a new work, The God Marduk, written especially for her by Andrew. John, Gillian and Alla formed a piano quartet with cellist, Thomas Gardner. They called themselves 'Contrasts', and asked Andrew for a work. Andrew was busy fulfilling a number of commissions, so I offered to arrange the Five Movements: for Piano Quartet. 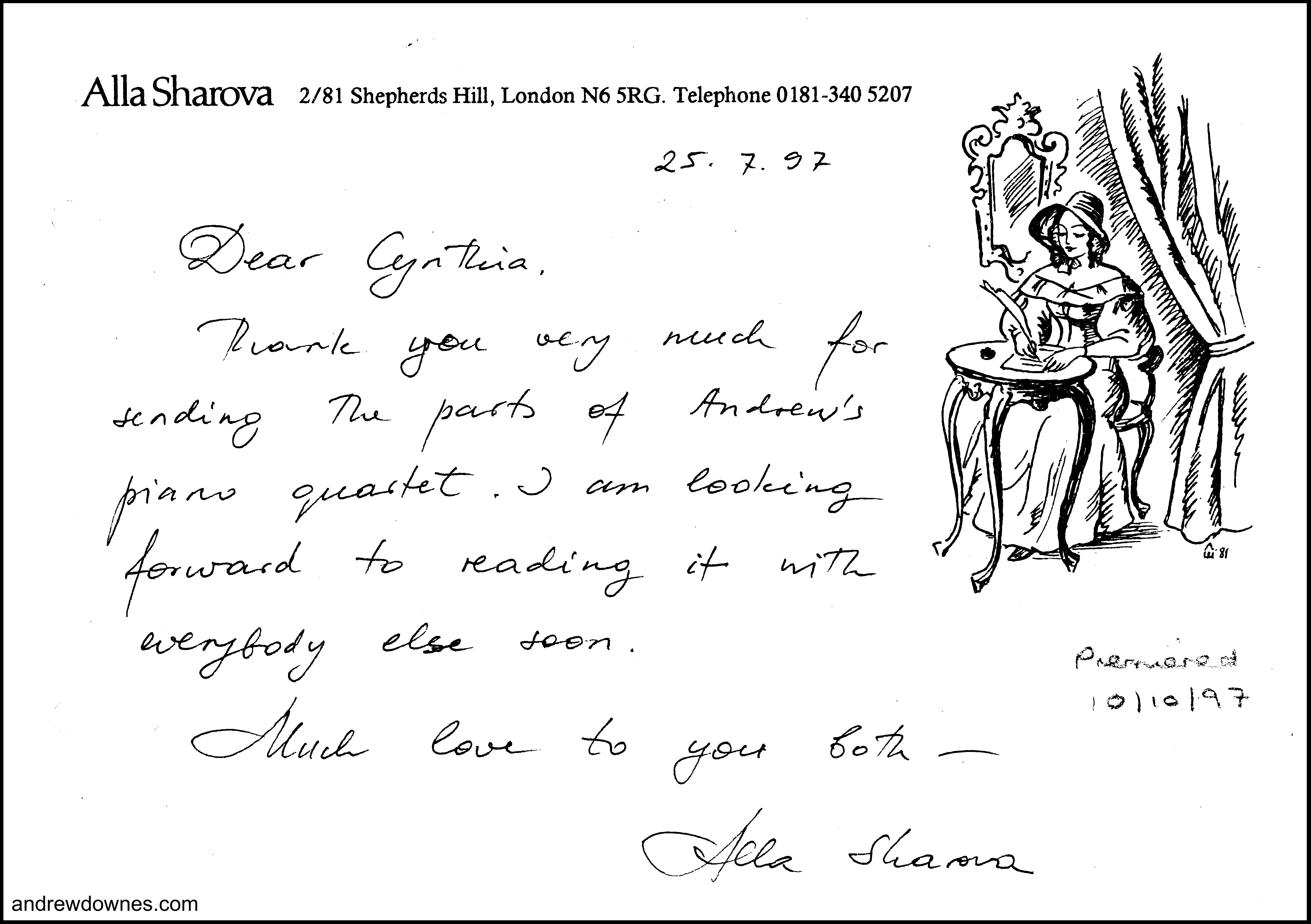 Contrasts were very pleased with the work, and first performed my arrangement at the Friends' Meeting House in Hertford, on October 10th 1997. Alla was keen for me to take a bow after the performance for my arrangement, despite my reluctance (This was Andrew 's composition, not mine!). Alla came into the audience to haul me up! 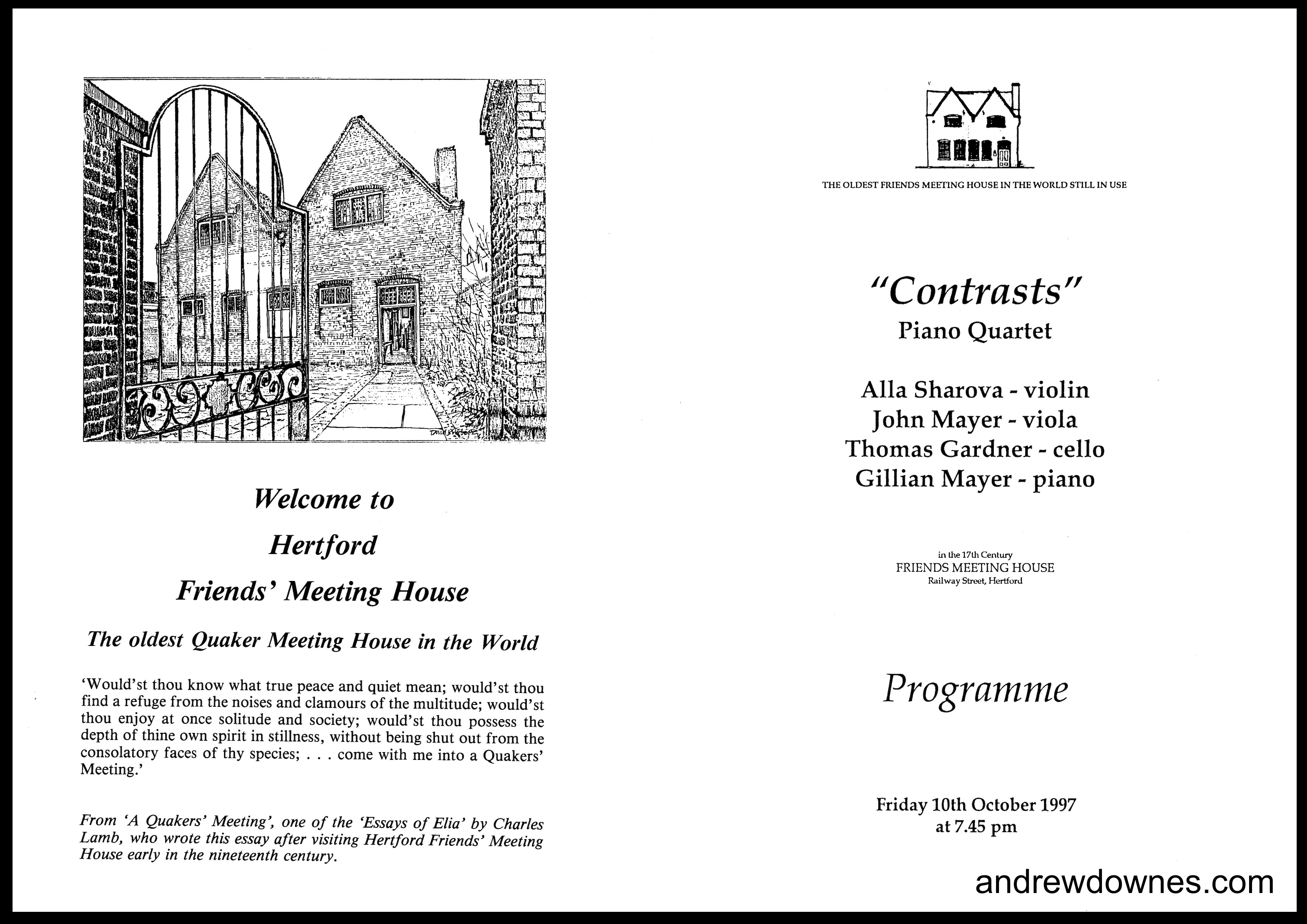 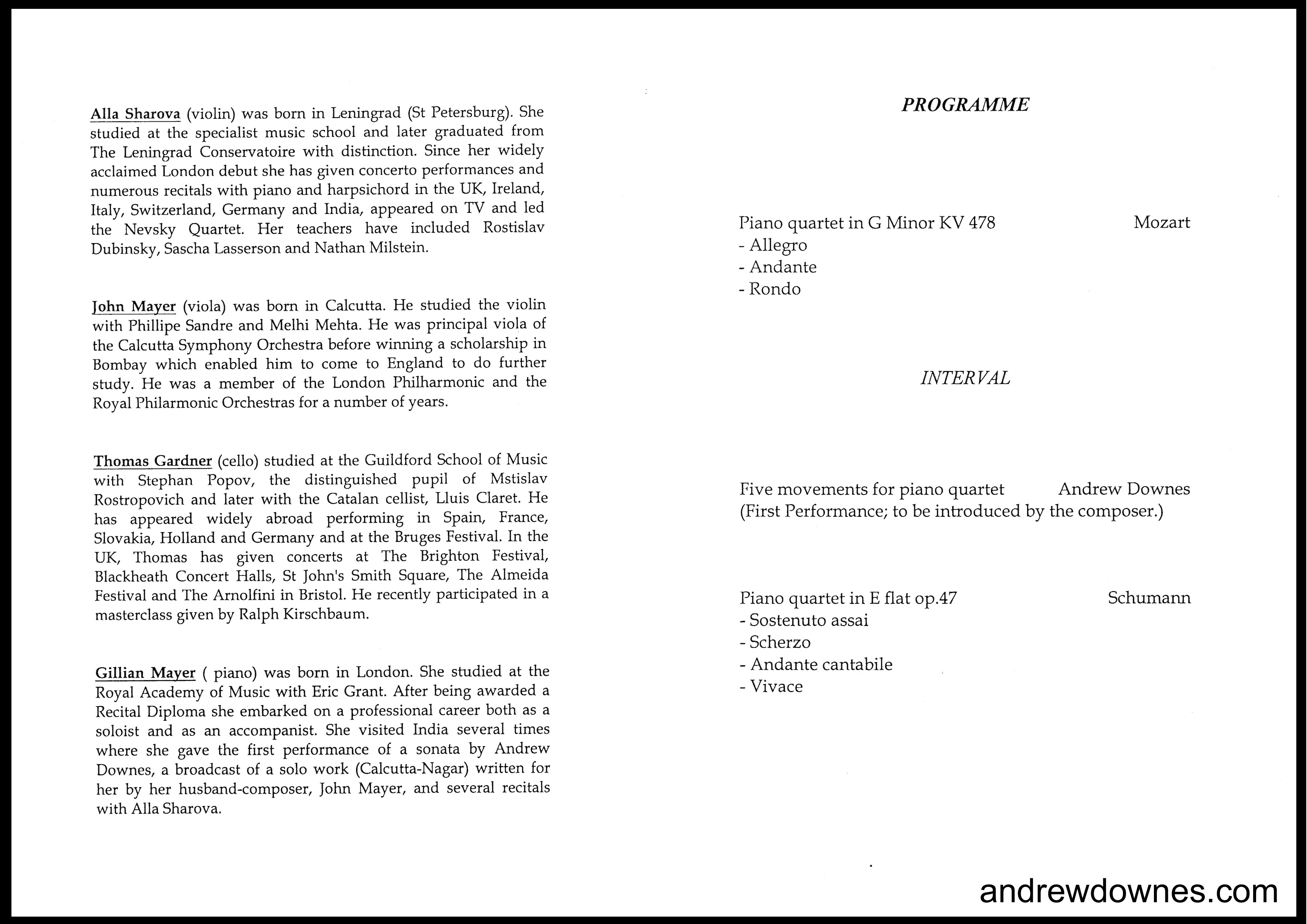 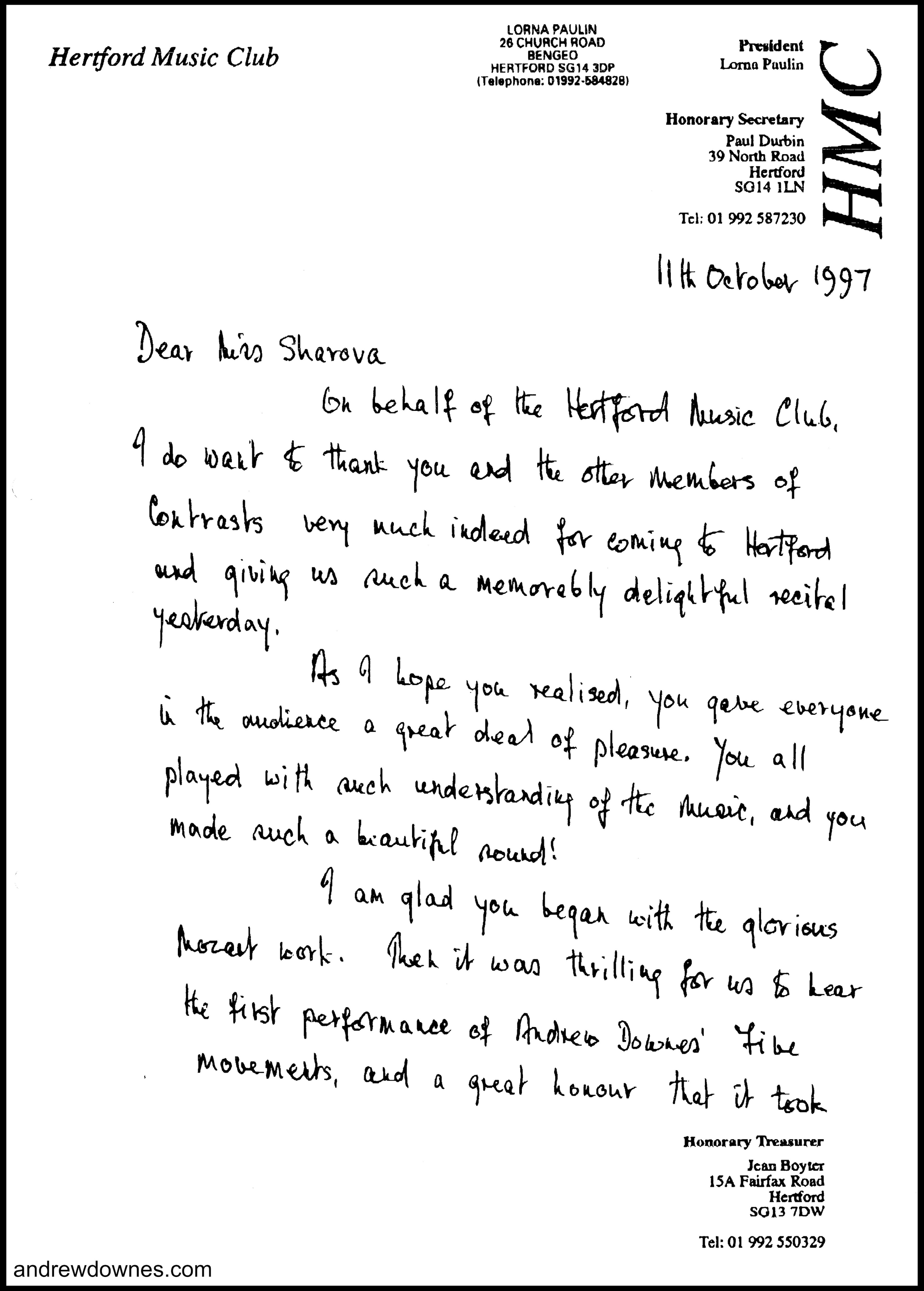 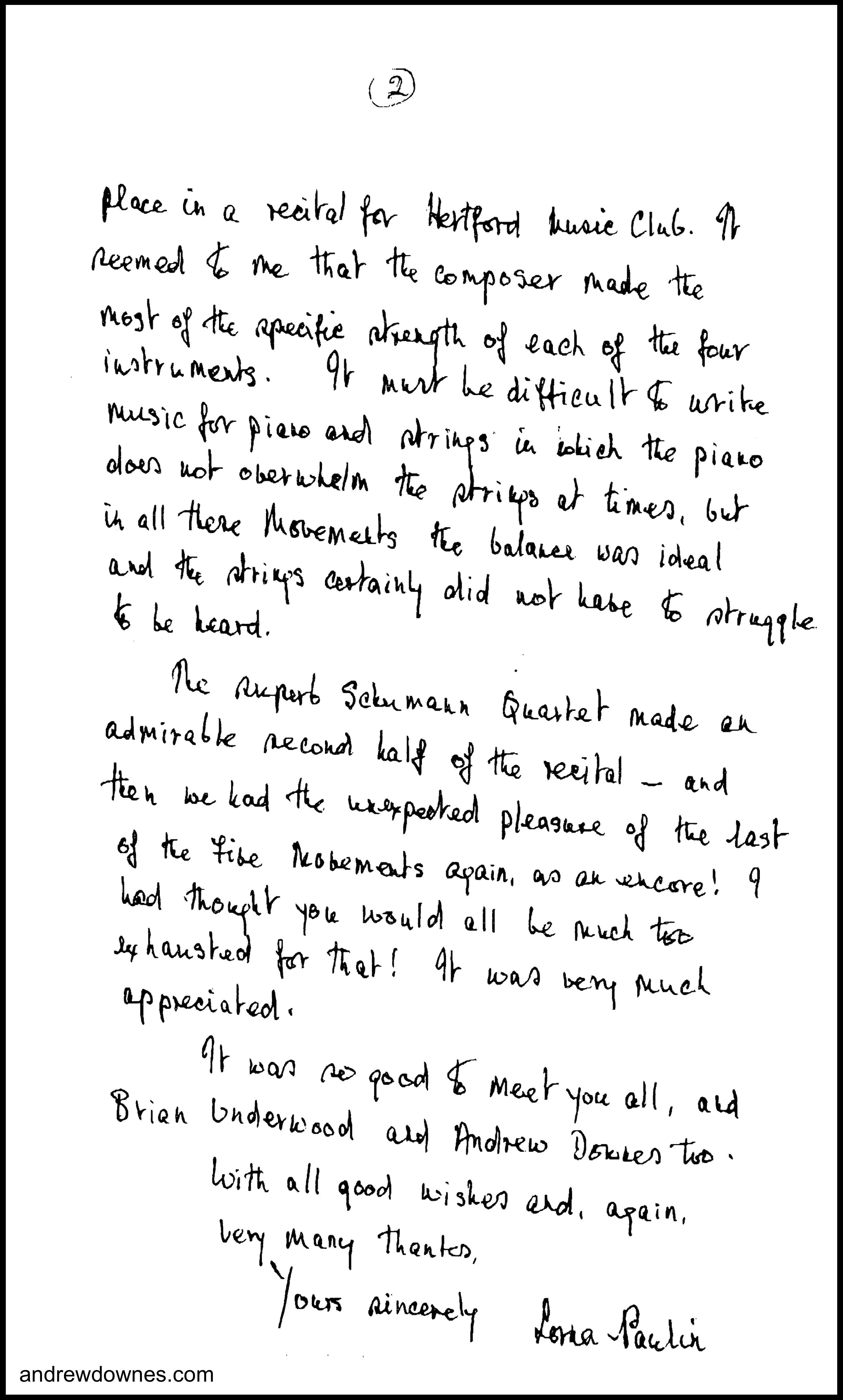 We were very pleased with the review in the Hertfordshire Mercury:

'This proved to be constantly interesting music and delightfully approachable. It has many beauties - melodies and fascinating rhythms - and makes the most of each of the instruments. The performance was vigorous, sensitive and confident, and in response to the audience's enthusiastic appreciation, the last movement was repeated as an encore at the end of the recital. It confirmed the first impression that further hearings would reveal even greater beauties in the music.'

Contrasts went on to give subsequent performances of the Piano Quartet at Birmingham Conservatoire (February 1999), 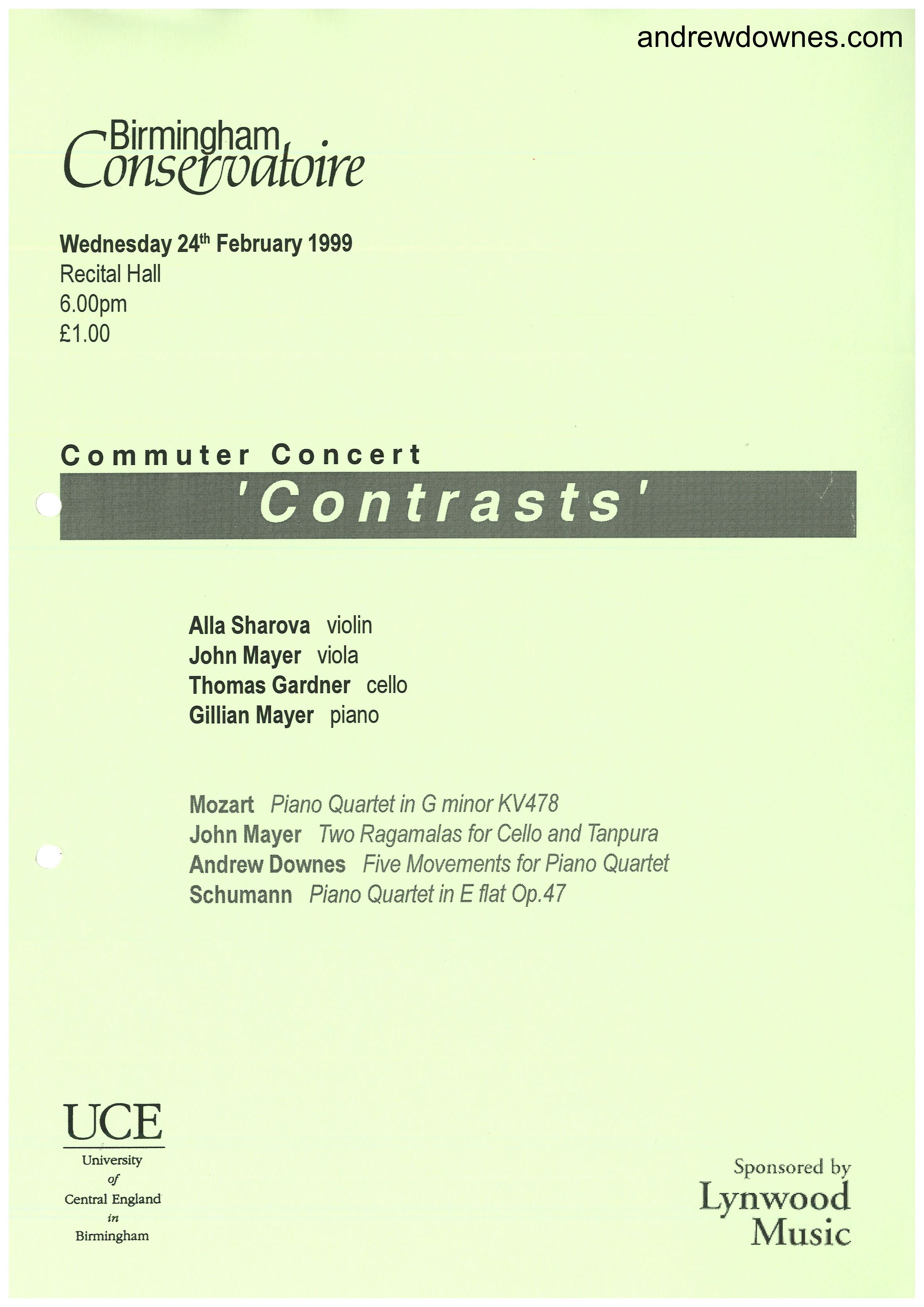 and then, under their new name, 'The Nevsky Ensemble', at Middachten Castle in Holland and in Luxembourg (October 2000). 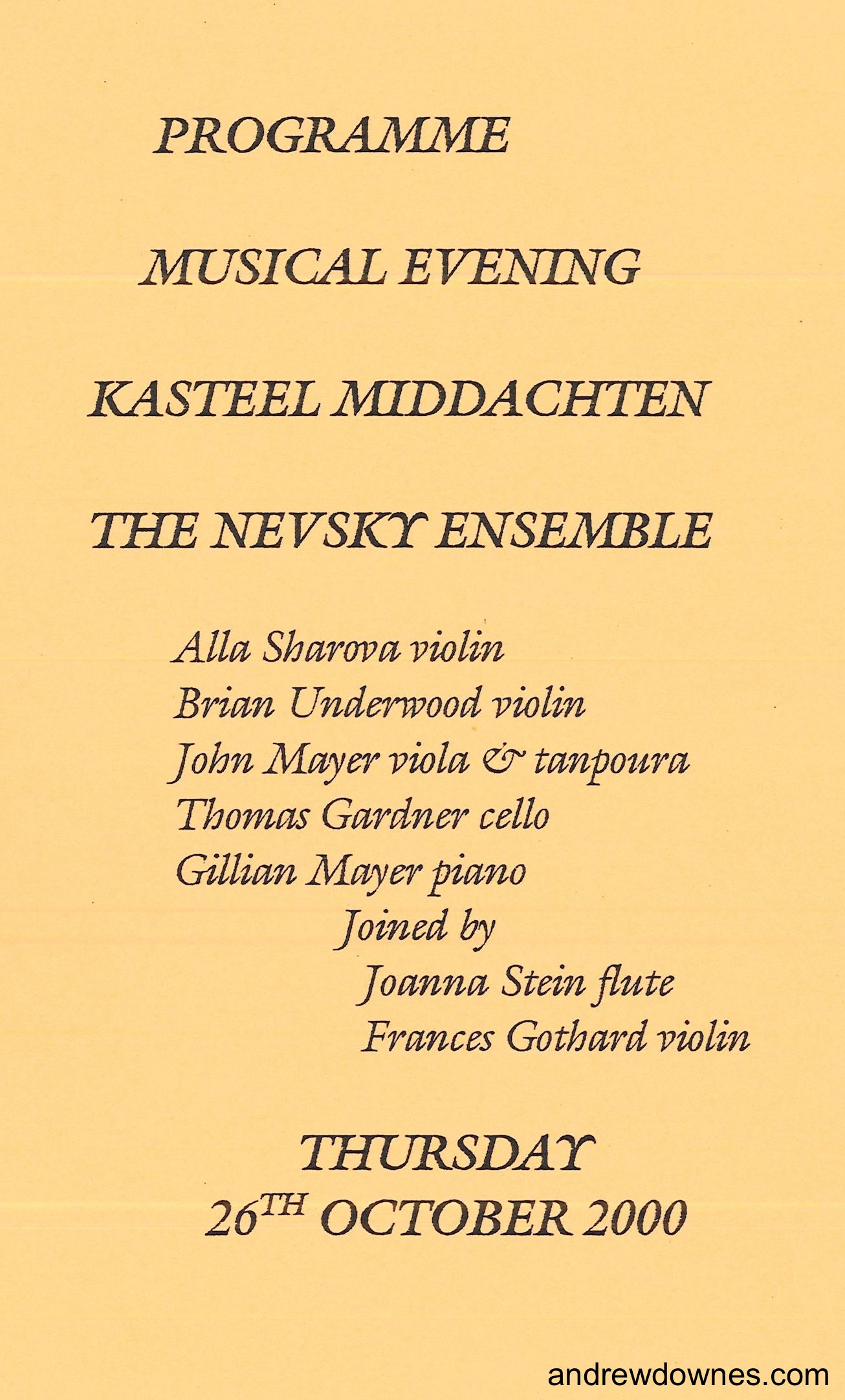 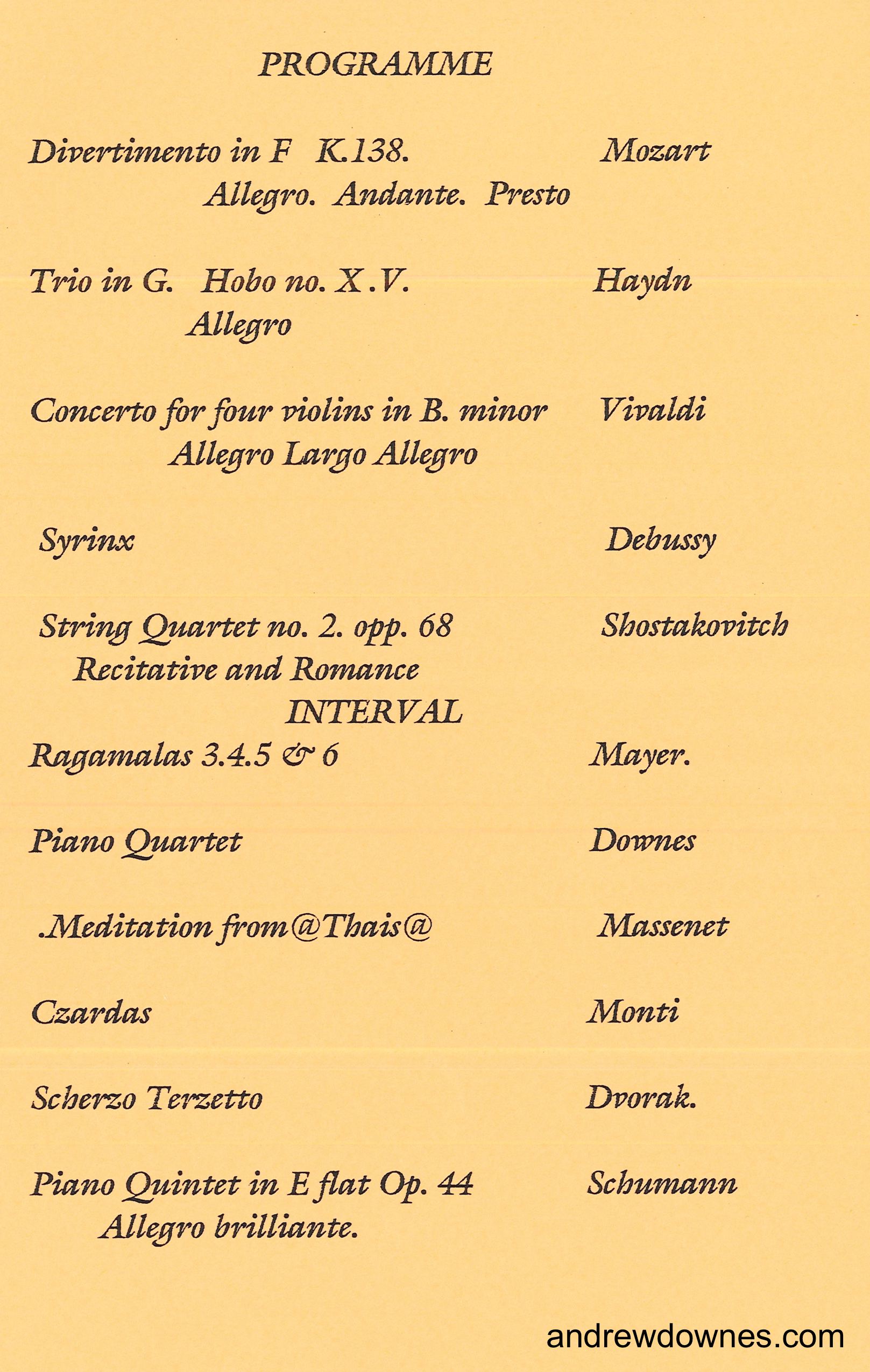 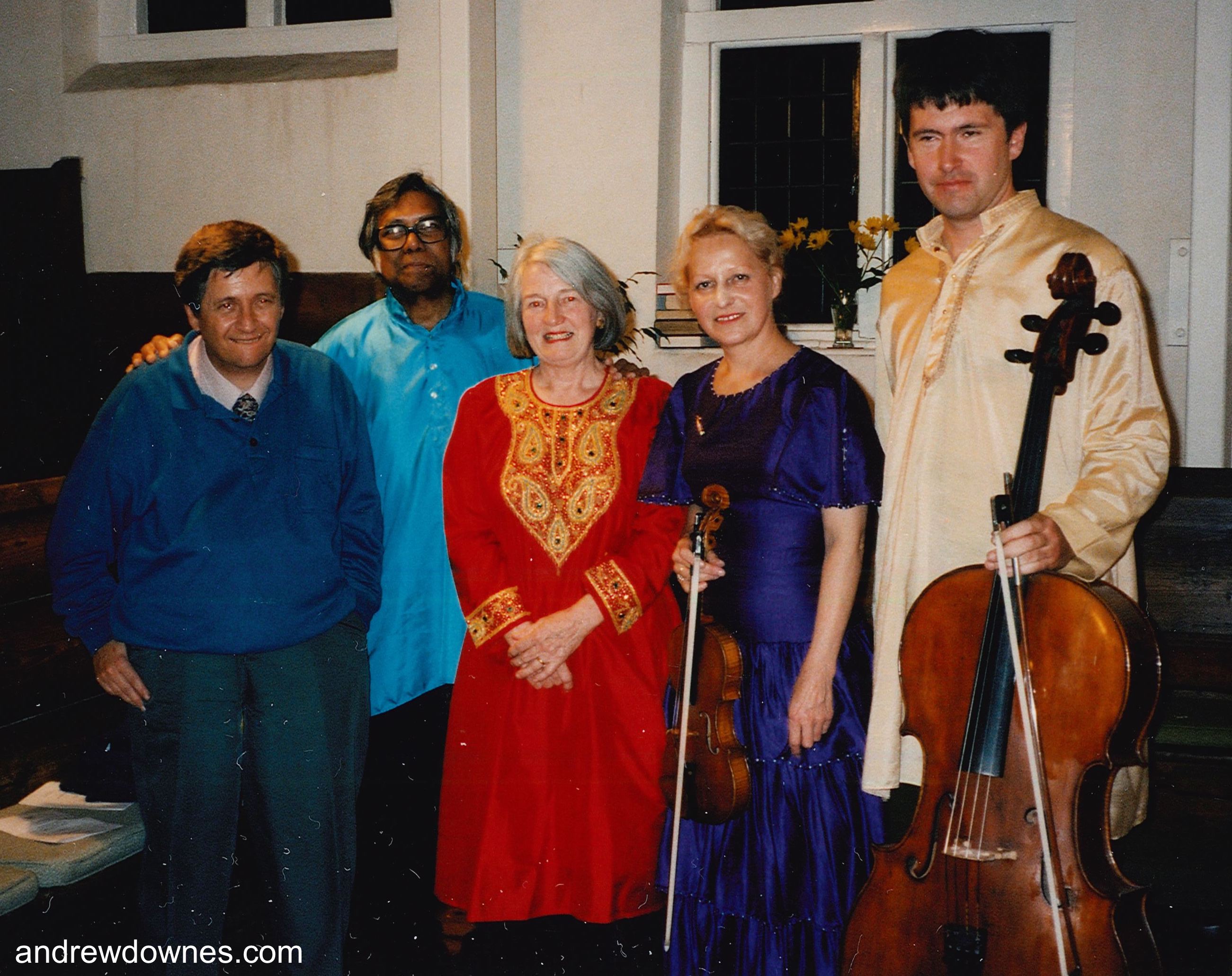 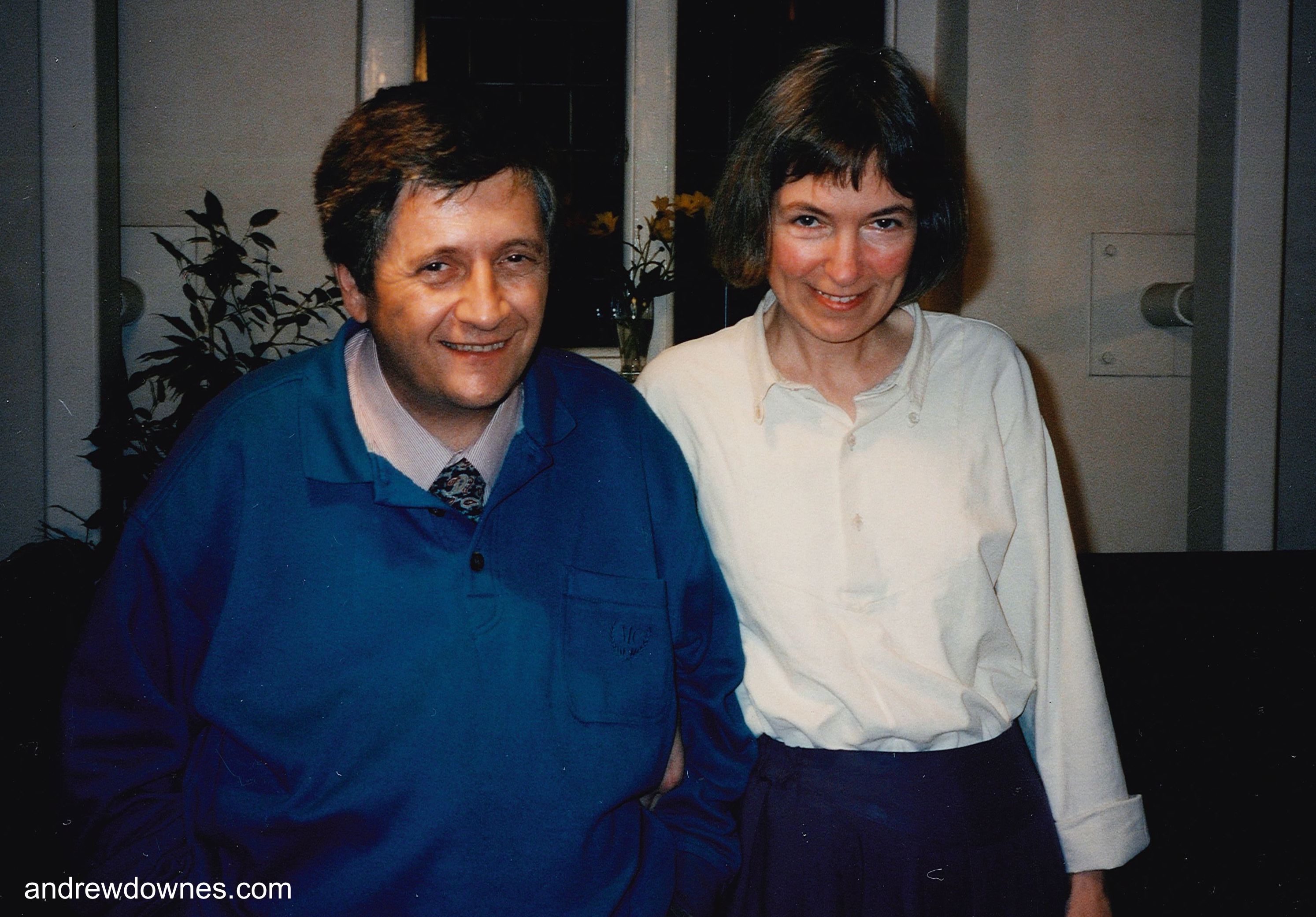 Andrew and Cynthia Downes, after the Hertford concert

Although our daughters, Anna and Paula, were not even born when Andrew wrote his Five Movements for Piano and Strings, they have been involved in a number of performances of the work.

In 1999 Anna organised a concert of Andrew's music in St John's Church, Hagley, Worcestershire, to raise funds for Mary Stevens Hospice.  Movement 4 of Andrew's Piano & Strings work was chosen for the concert and performed by our daughter, Paula (piano), with the Lynwood Lea Ensemble, directed by me. 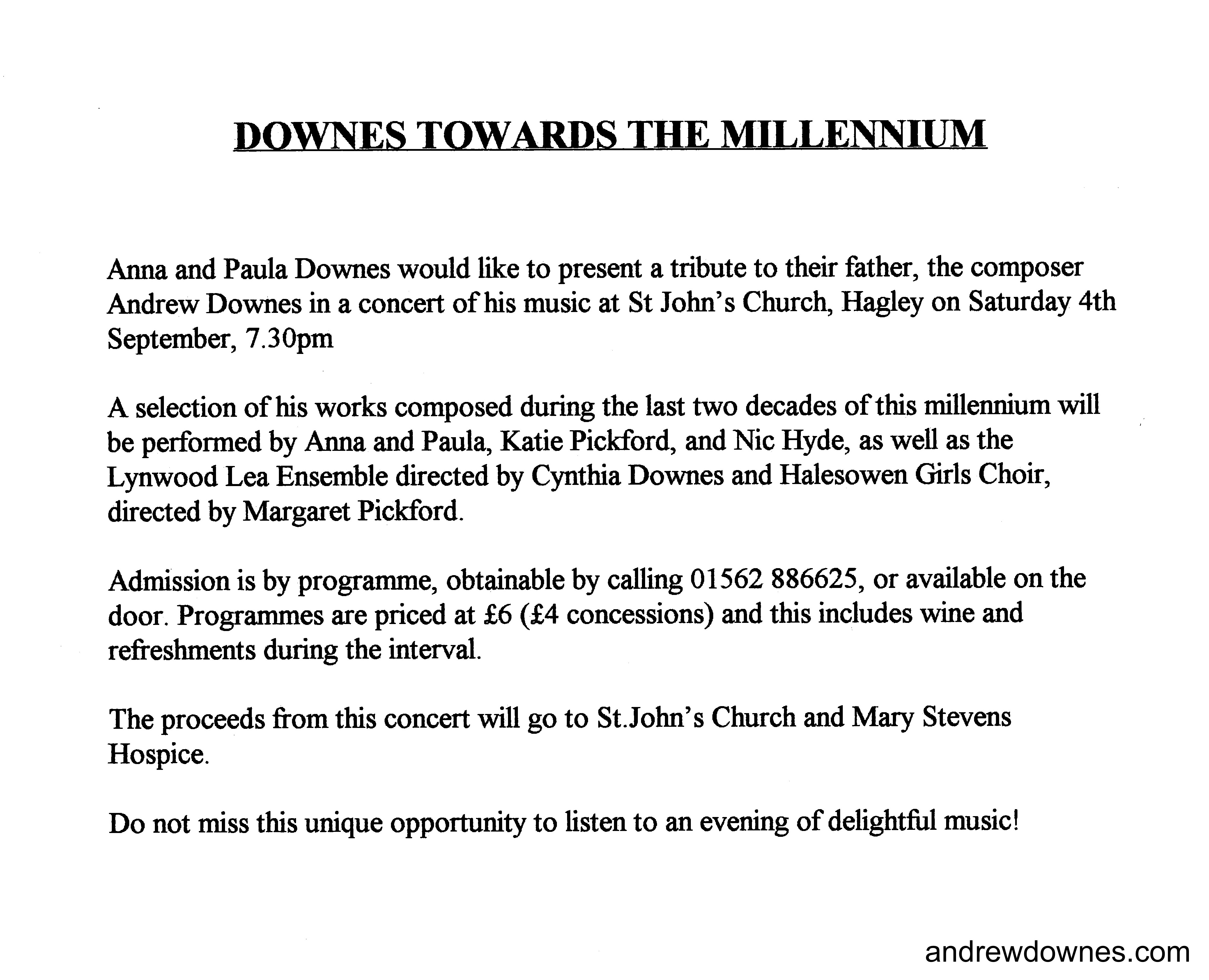 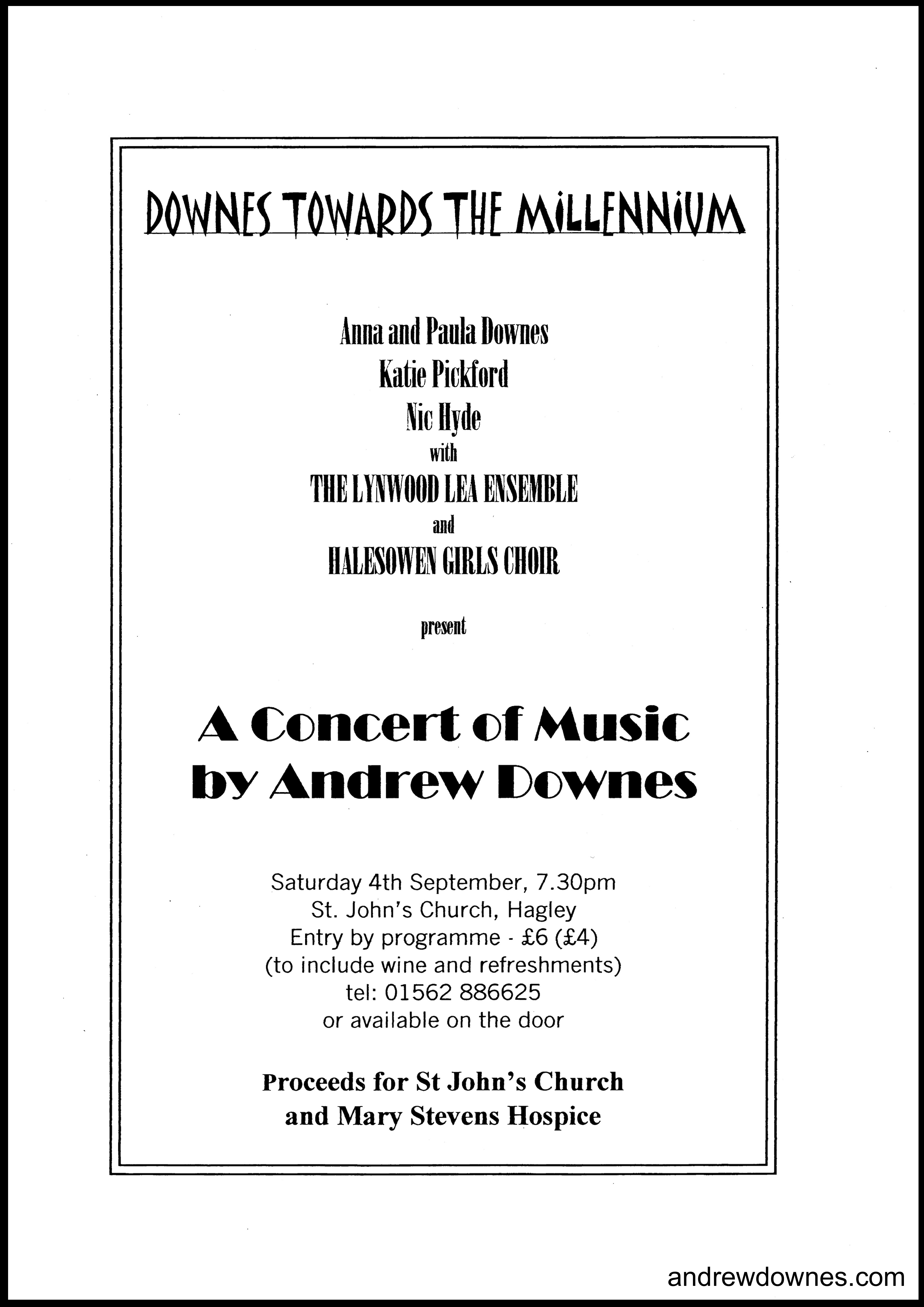 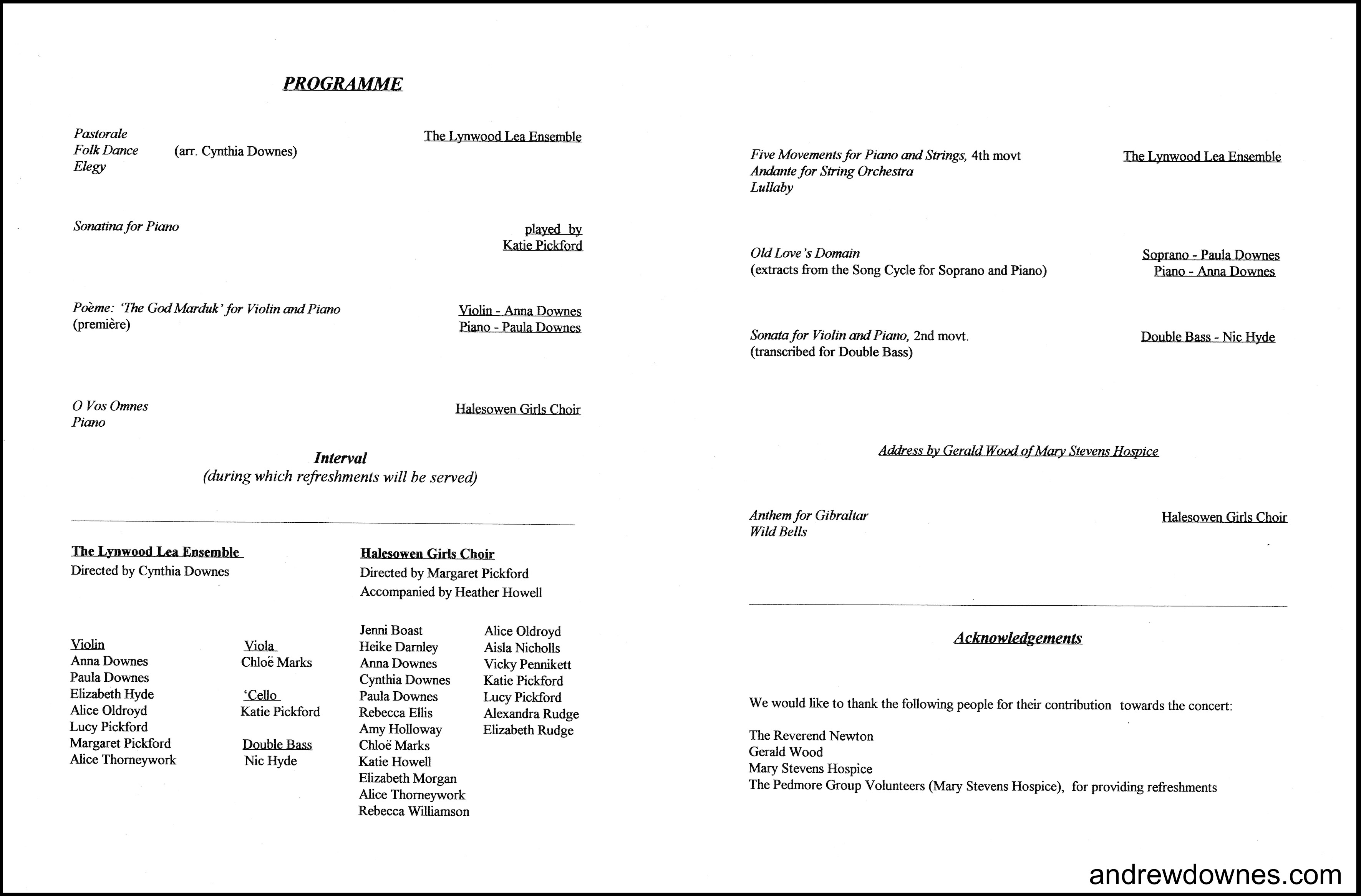 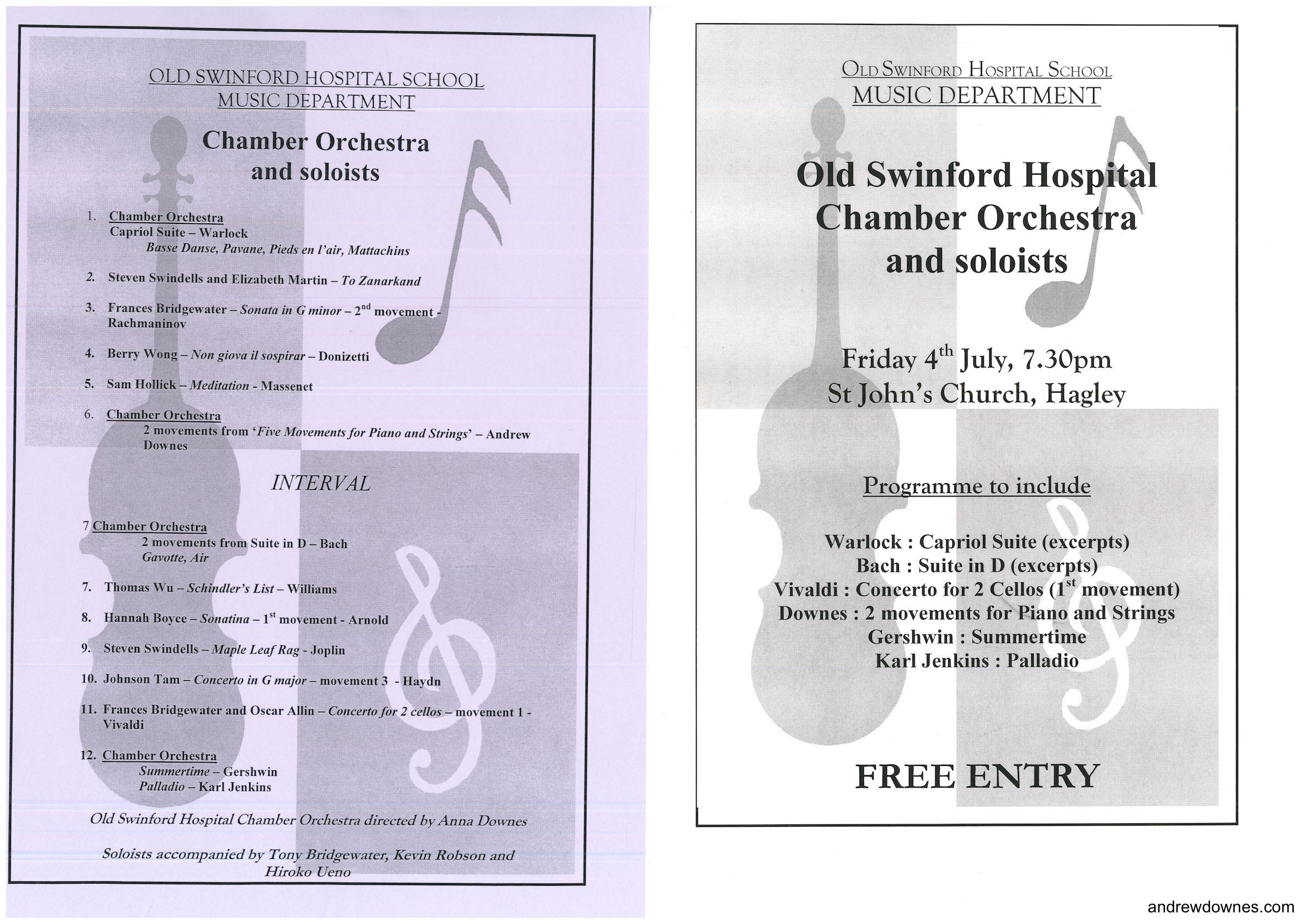 In May 2014, I arranged Movements 2,3 and 4 for Michael Jones (piano) with my Hagley Community Orchestra, led by Anna, which I conducted, in a 'Spring Celebration' concert in St Saviour's Church, Hagley.

The Central England Ensemble (founded and led by Anna) performed the whole work with pianist Duncan Honeybourne, directed in this performance by Lee Armstrong, in Carr's Lane Church, Birmingham, in June 2015.  I  played viola in the concert and loved reliving the work. 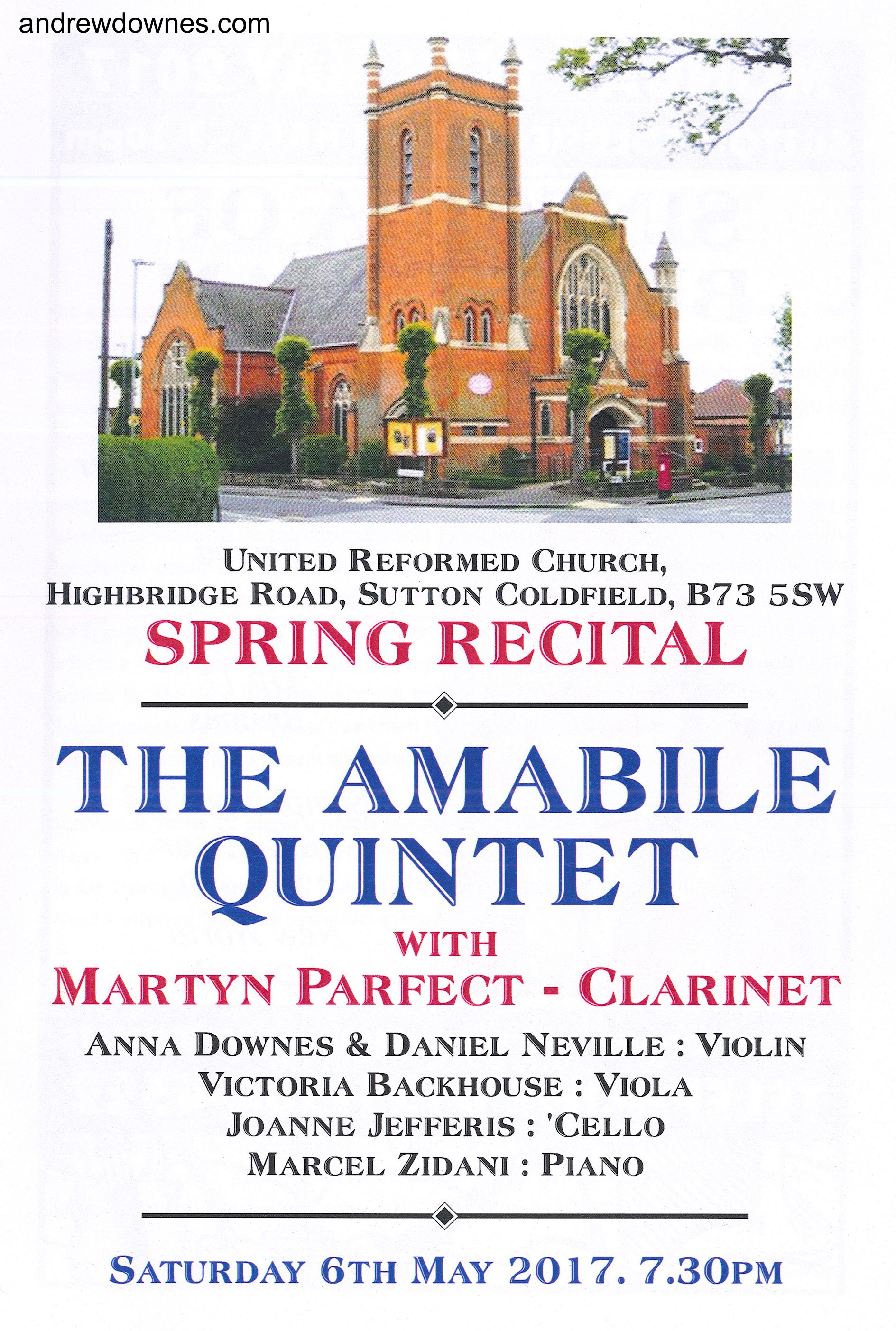 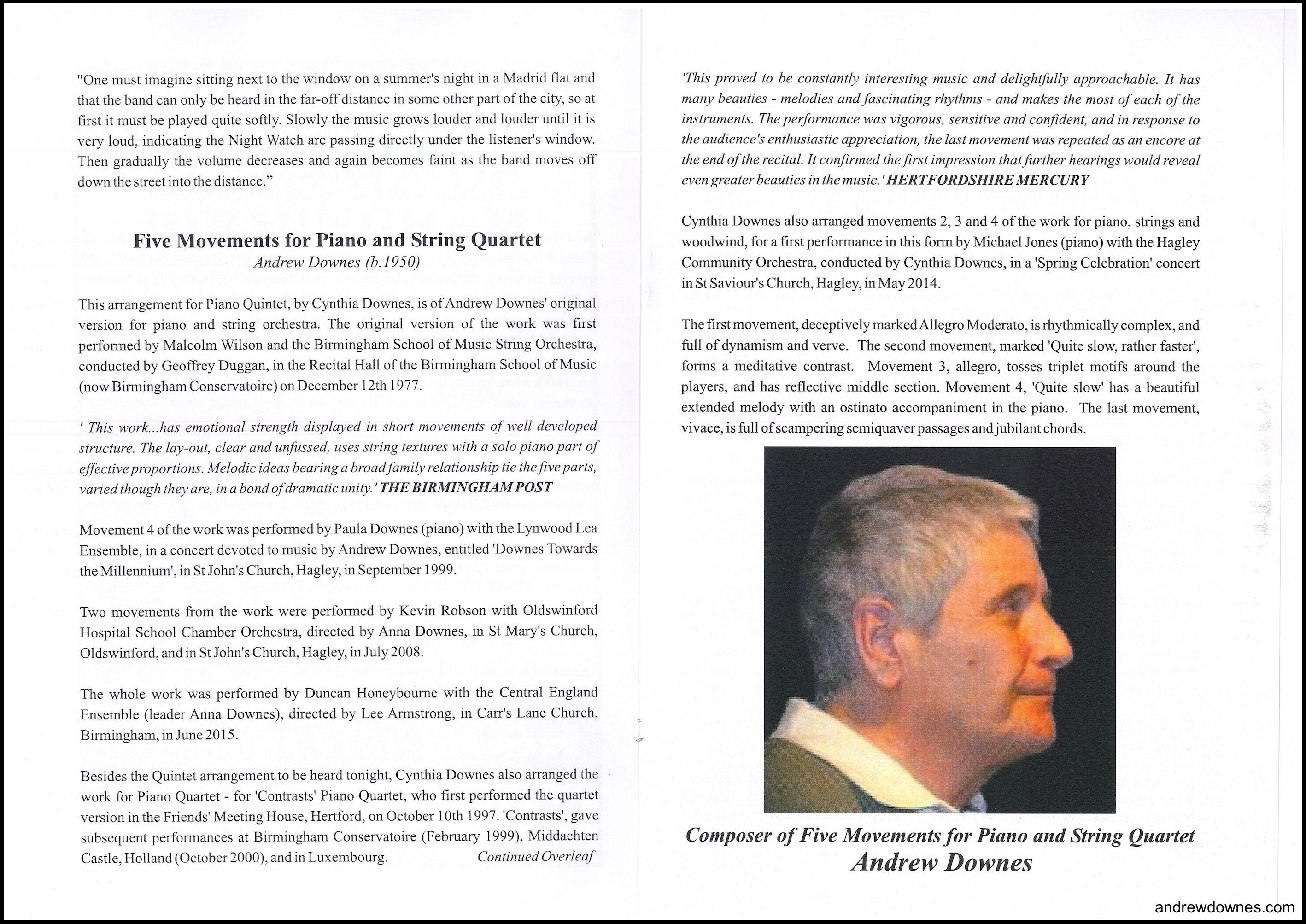 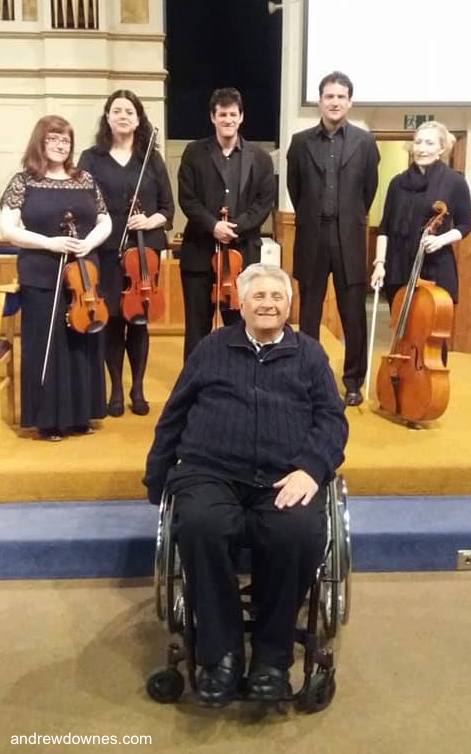