Song of the Prairies
Poem by William Cullen Bryant set to music for SATB soloists, semi-choir of high voices, full chorus and orchestra 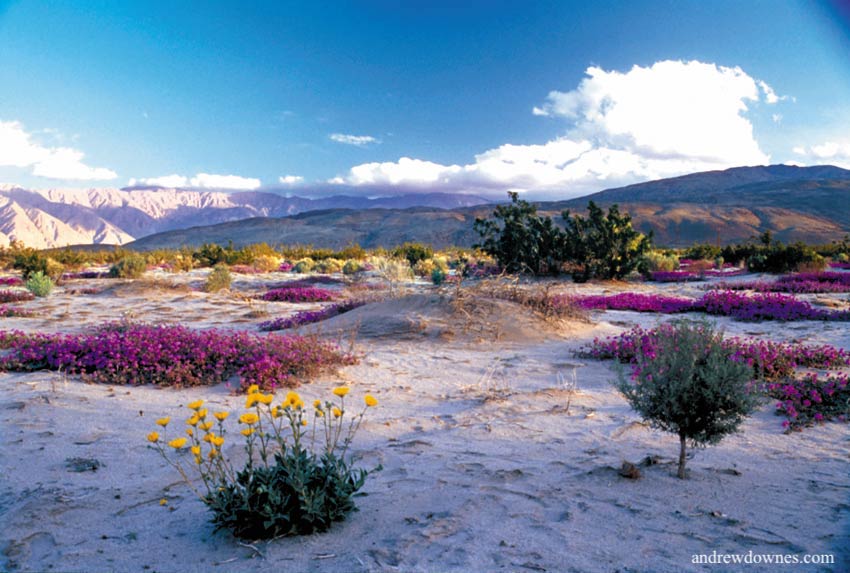 An account by his wife and publisher, Cynthia Downes, posted on March 7th, 2022

Shrewsbury Public School used to hold an annual Singing Weekend.  Andrew was absolutely thrilled when Andrew Auster, Head of Music at the School, asked him to compose a work for the Sixth Singing Weekend in 1988.  Andrew had at his disposal 4 vocal soloists, a massed choir from all parts of the UK, the famous Cantamus Girls’ Choir and the Birmingham School of Music (now Royal Birmingham Conservatoire) Symphony Orchestra.  The icing on the cake was to be the highly distinguished conductor, John Rutter.    Andrew chose as his text for his large-scale choral work, The Prairies, by the American poet, William Cullen Bryant (1794-1878).  As Andrew set this inspiring verse to music, I knew he was composing a masterpiece. 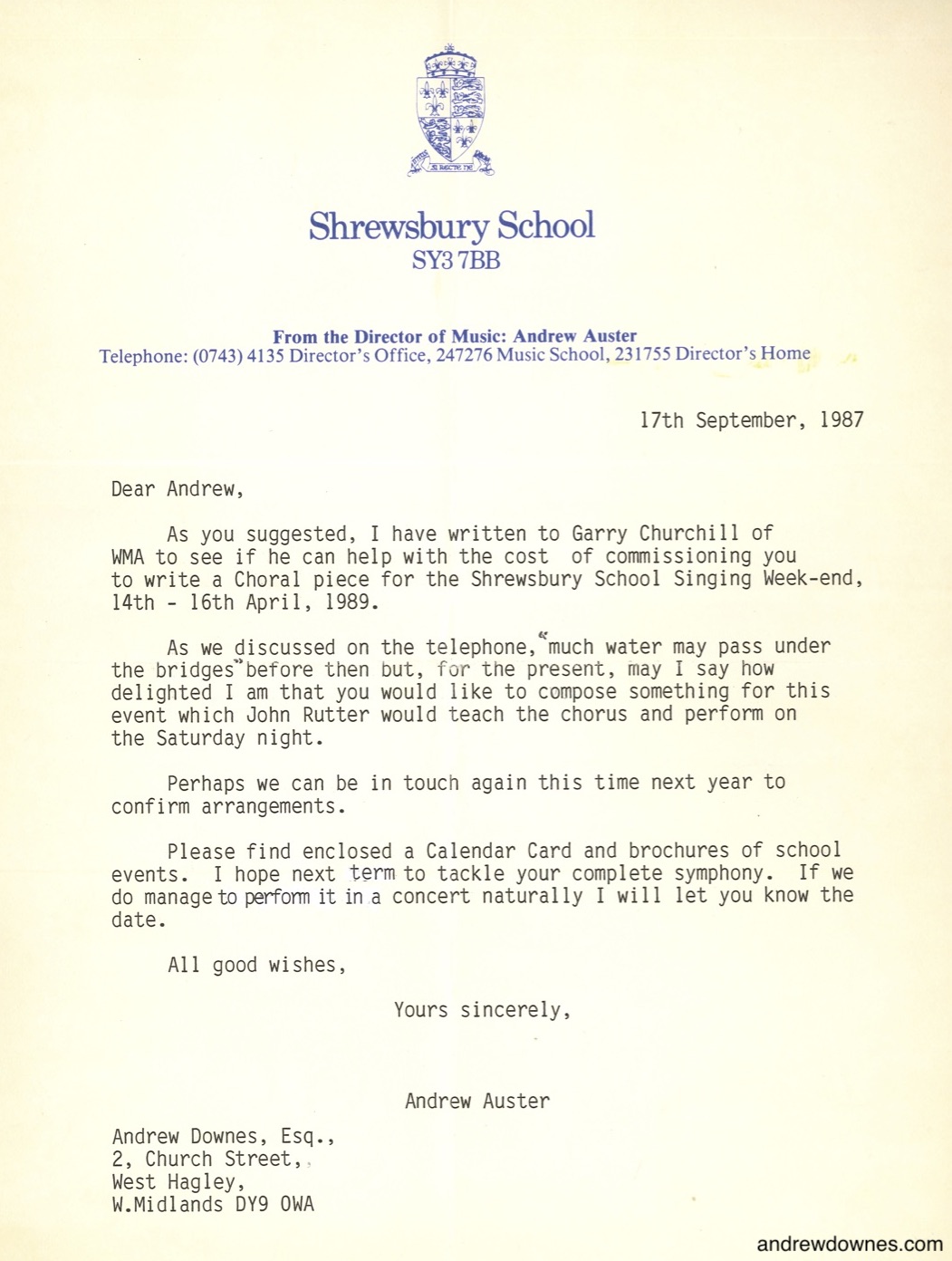 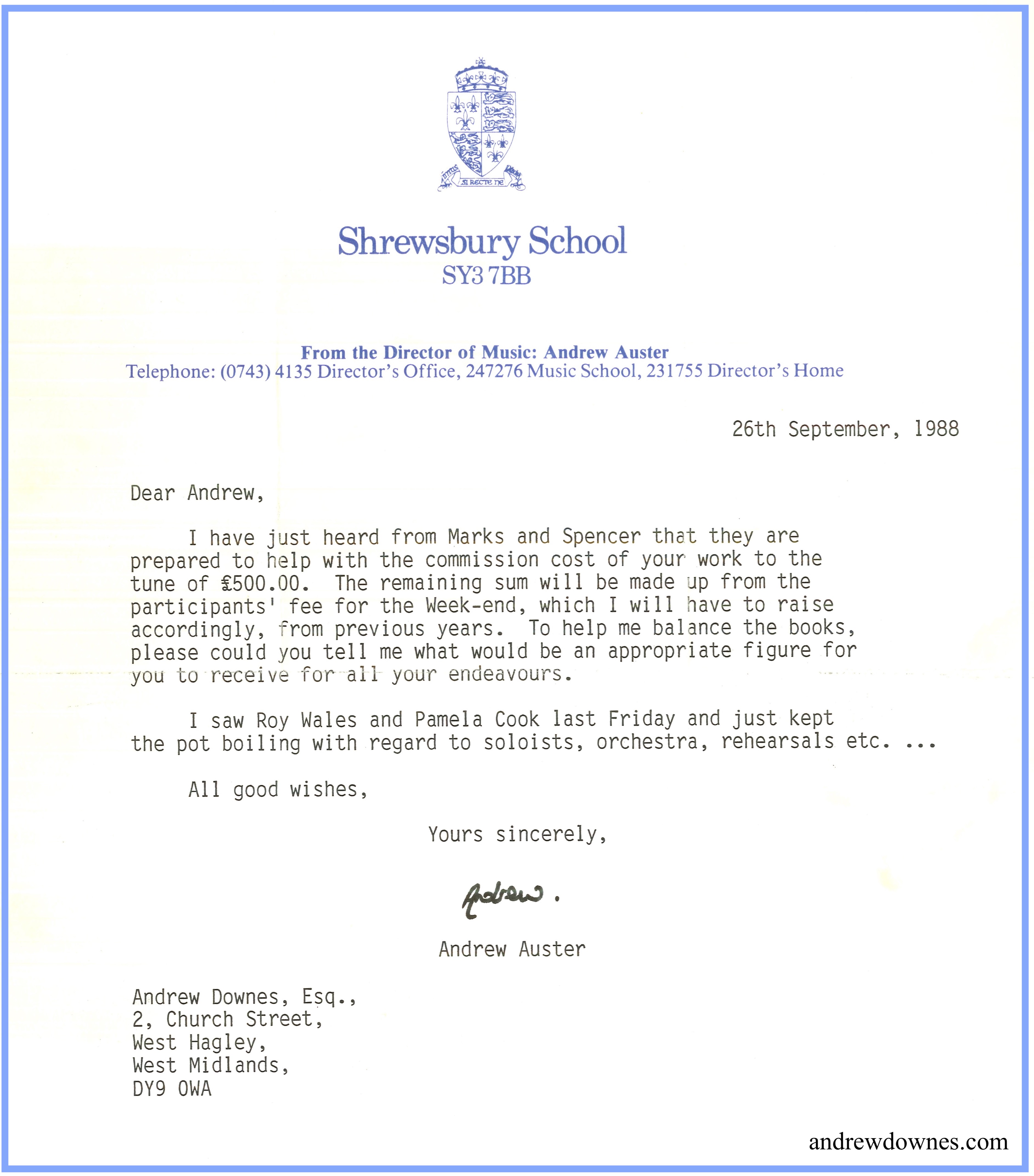 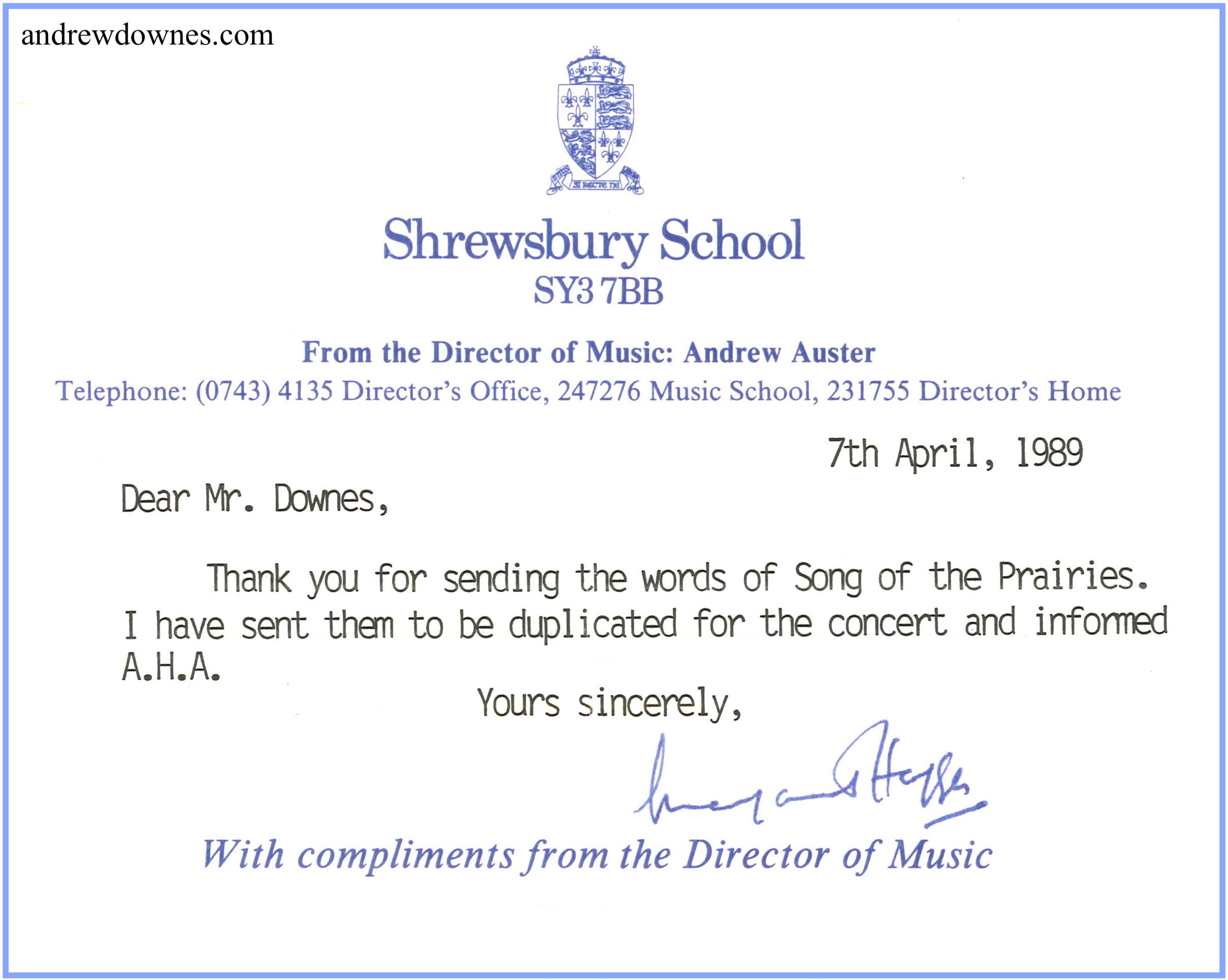 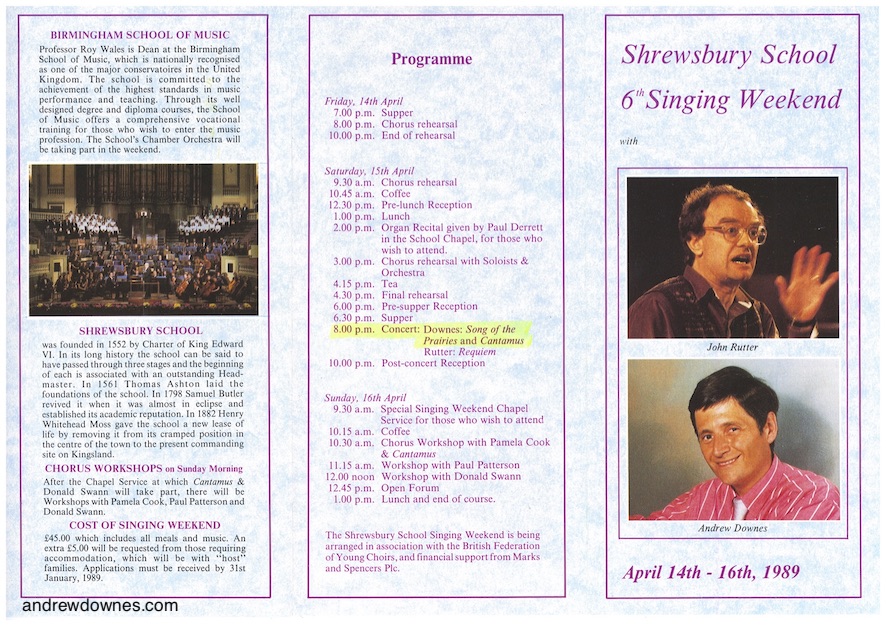 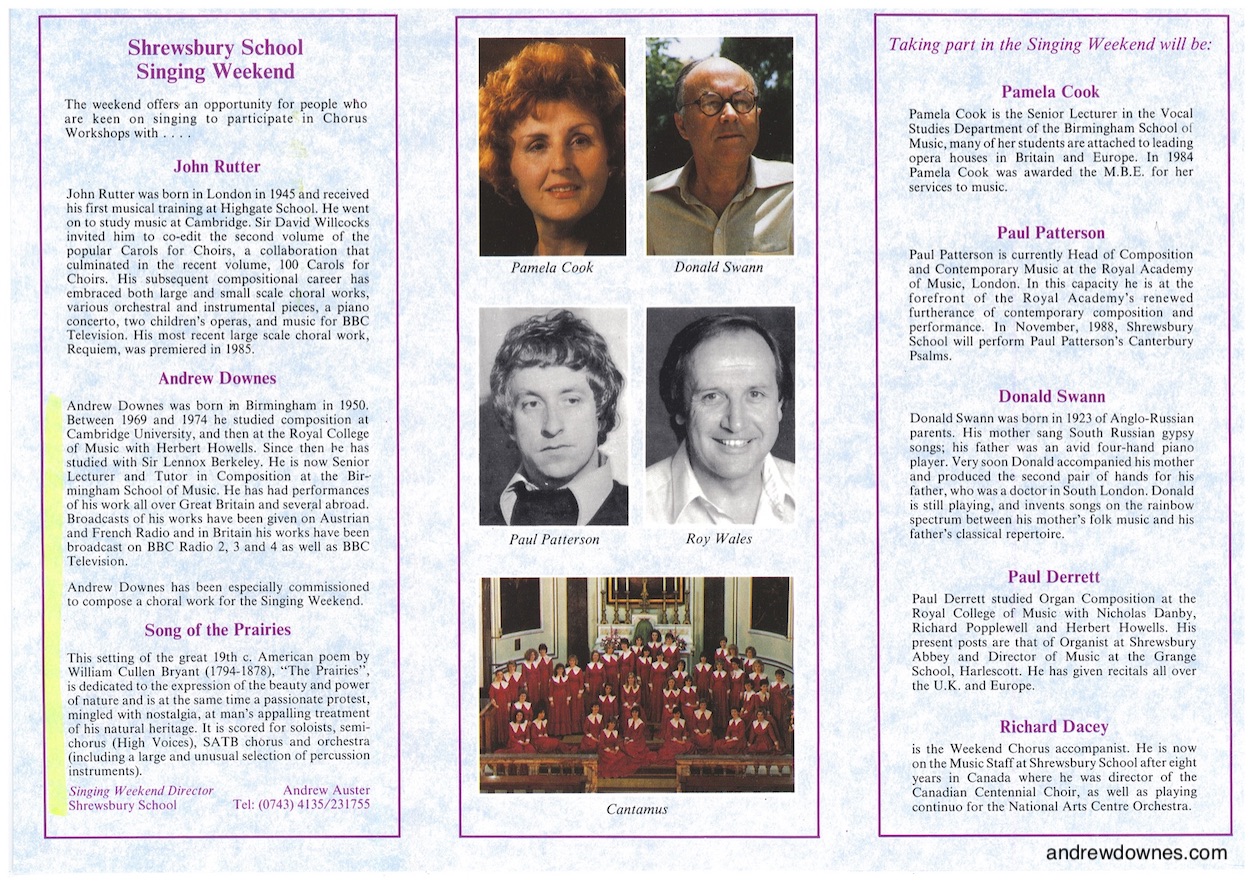 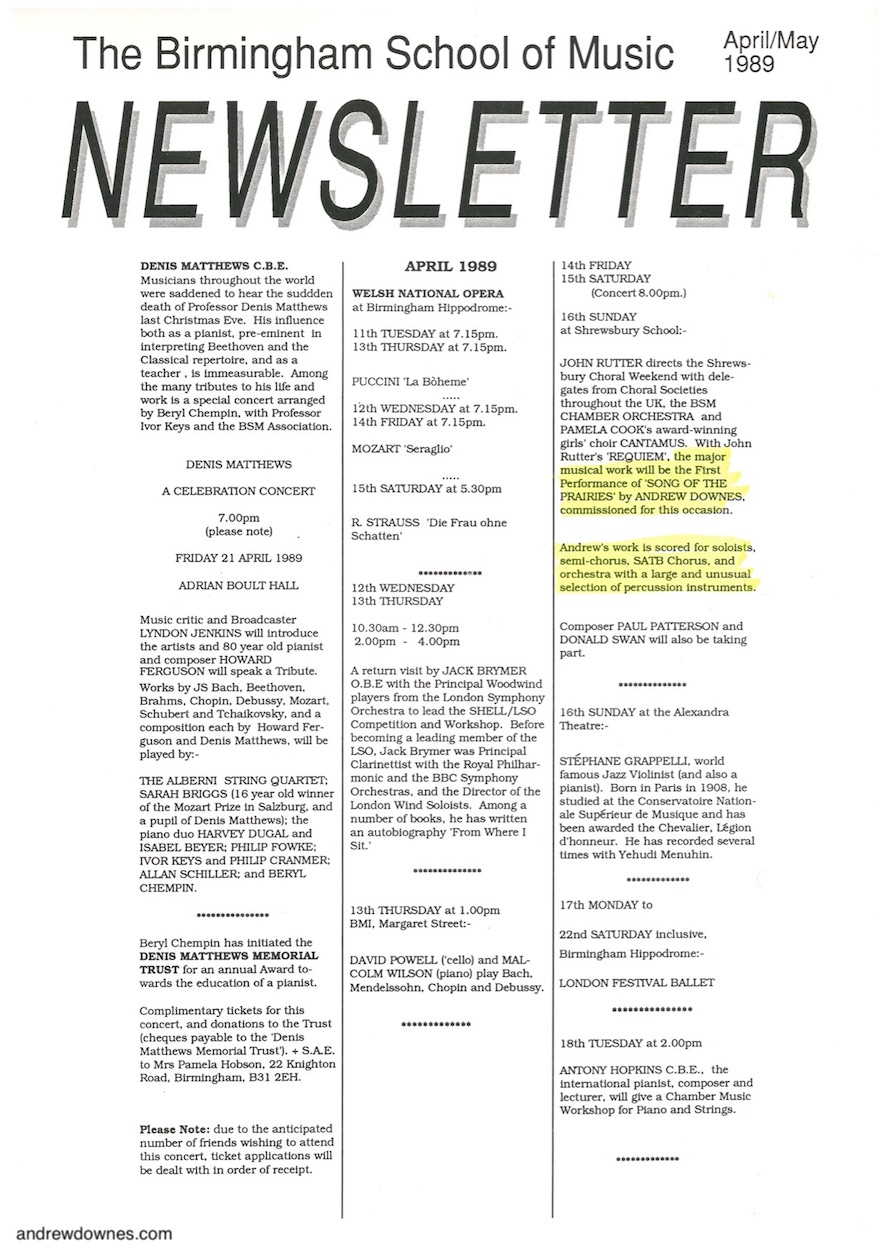 Andrew was very busy at the time with other commissions, and so he asked his trusty student who had also brilliantly copied Centenary Firedances, to take on the copying of the much bigger Song of the Prairies. (No computers to do the job in those days.)

Unfortunately, John Rutter was not very pleased when he spotted mistakes in the score.  Fortunately, they got ironed out in the rehearsals over the singing weekend and the premiere of Song of the Prairies was a huge success.  Everyone loved it.  For me it was the most moving work I had ever heard, both in its message (man’s destruction of the earth) and the beautiful music. 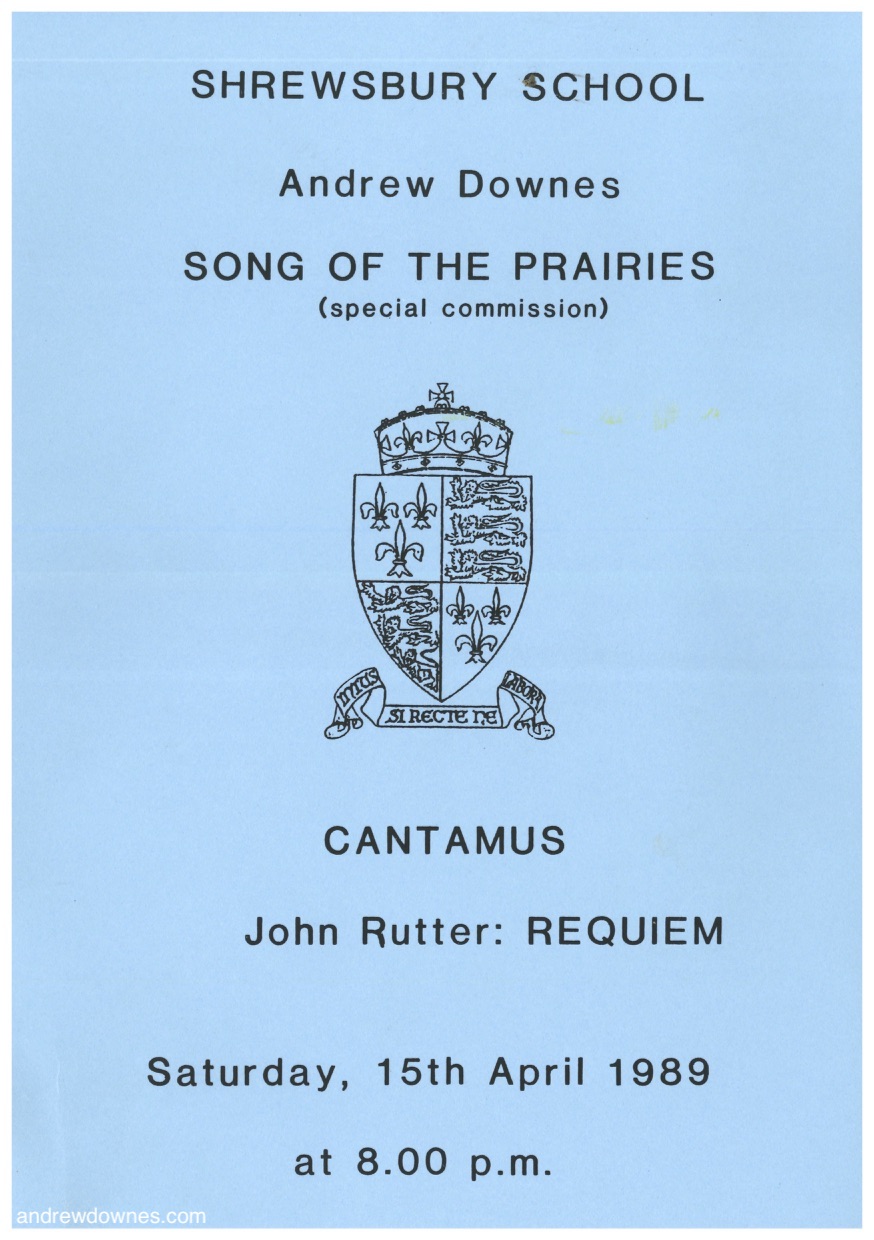 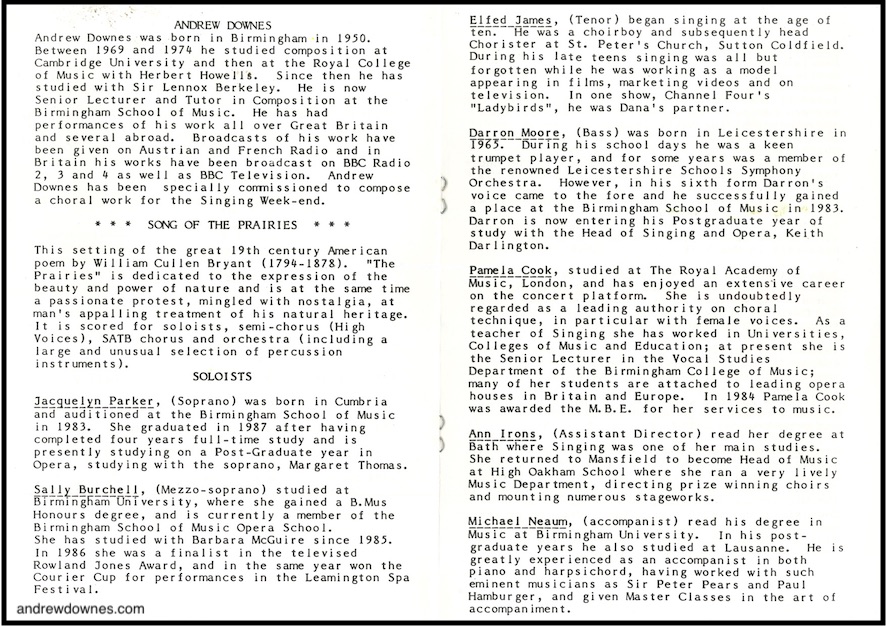 Andrew wrote in his score that the work is “dedicated to the expression of the beauty and power of nature and is at the same time a passionate protest, mingled with nostalgia, at man’s appalling treatment of his natural heritage.”  In the middle section of the work, the music reflects the composer’s anger over the callous and sinister attitude of those who ride roughshod over our world for their own ends.  I write more fully about Andrew’s philosophy in my blog entitled Native American Influence in the music of Andrew Downes.

Andrew has always passionately believed in the Native American philosophy of life: that we belong to the earth; the earth does not belong to us and it is our duty to preserve it.  Song of the Prairies was his first work which embraced this philosophy.  The great 19th century poem, The Prairies, by poet of nature William Cullen Bryant, gave Andrew a perfect vehicle to convey his feelings and ideas.     So, Song of the Prairies, commissioned by the Shrewsbury School Sixth Singing Weekend, was given its first performance in the Alington Hall of Shrewsbury School on 15th April 1989 by soloists, Jacqueline Parker (soprano), Sally Burchell (mezzo soprano), Elfred James (tenor), Darron Moore (bass), Cantamus Girls' Choir (director Pamela Cook), a massed chorus from all over Britain and Birmingham Conservatoire Symphony Orchestra under the direction of John Rutter.

Front cover of the score: 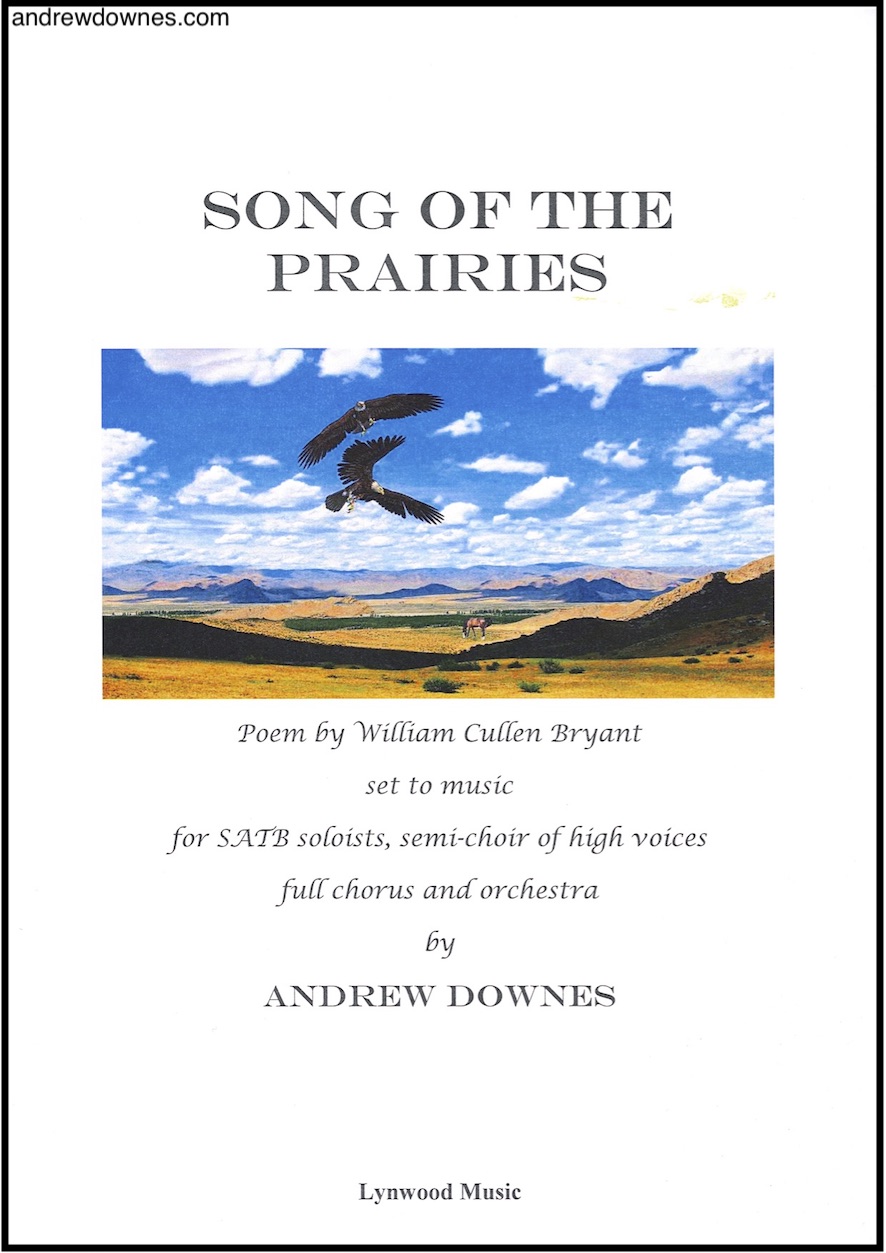 We were glowing after that first performance and I well remember the journey back, chatting to three students who had played in the work.  We just about got the two cellos of two of the students into our boot!

Card from Andrew Auster after the event: 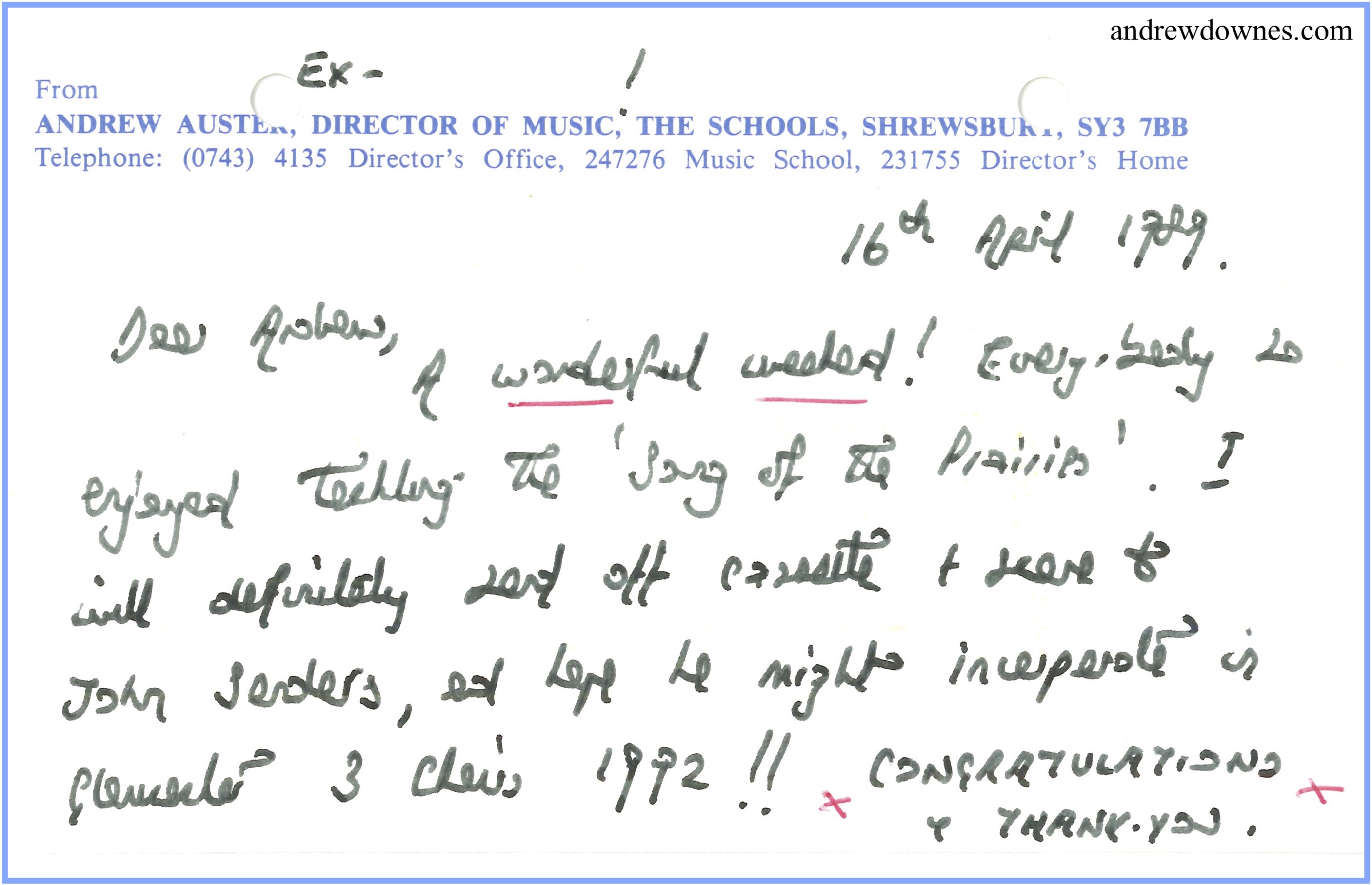 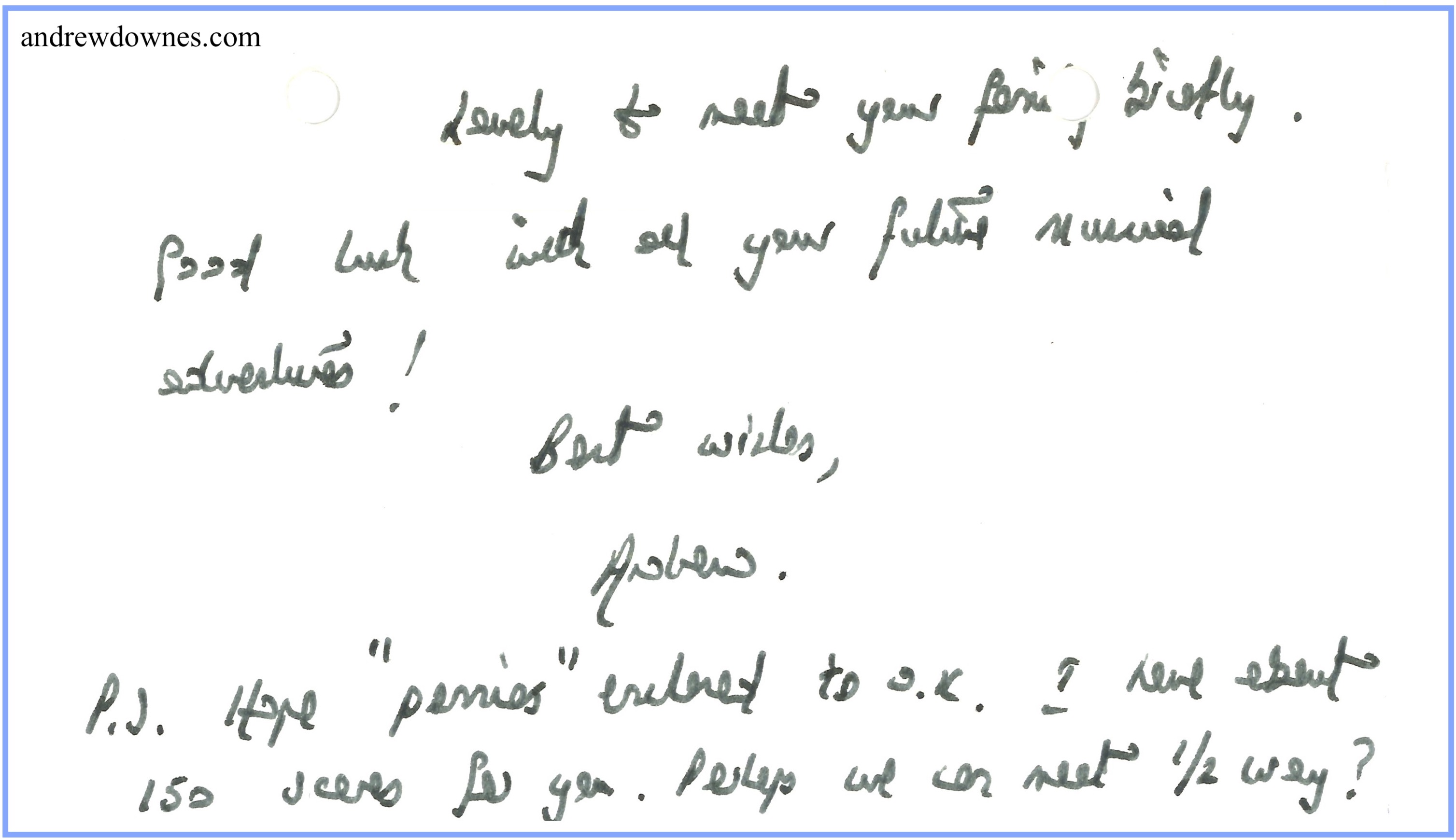 The copies, with their corrected imperfections, were used for the second performance of Song of the Prairies, which was given in March 1991 in the Adrian Boult Hall, Birmingham, by soloists Catherine Mason (soprano), Sarah Mills (soprano), Clare Mason (mezzo-soprano), Richard Owen (tenor) and Wen-Hao Tsai (bass), with the Birmingham Polytechnic Chorus, the Birmingham Conservatoire Singers and Sinfonia, conducted by Peter Johnson. 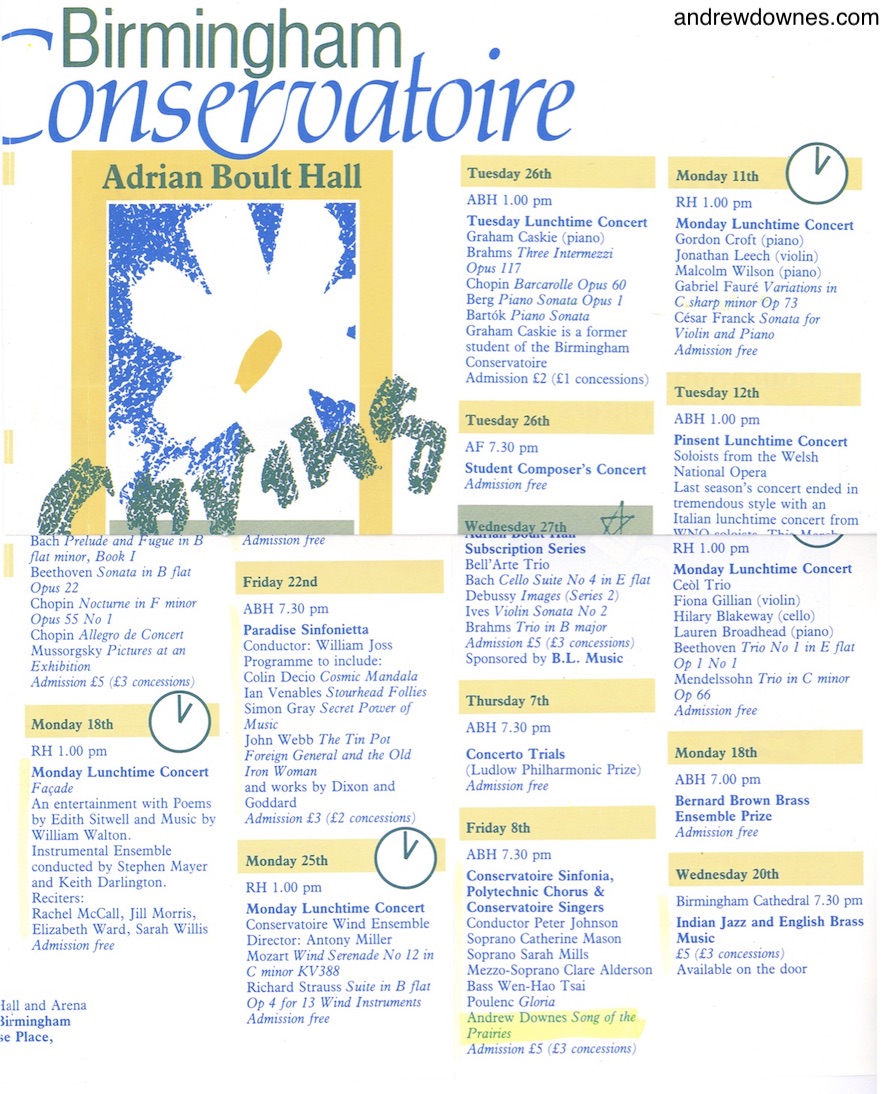 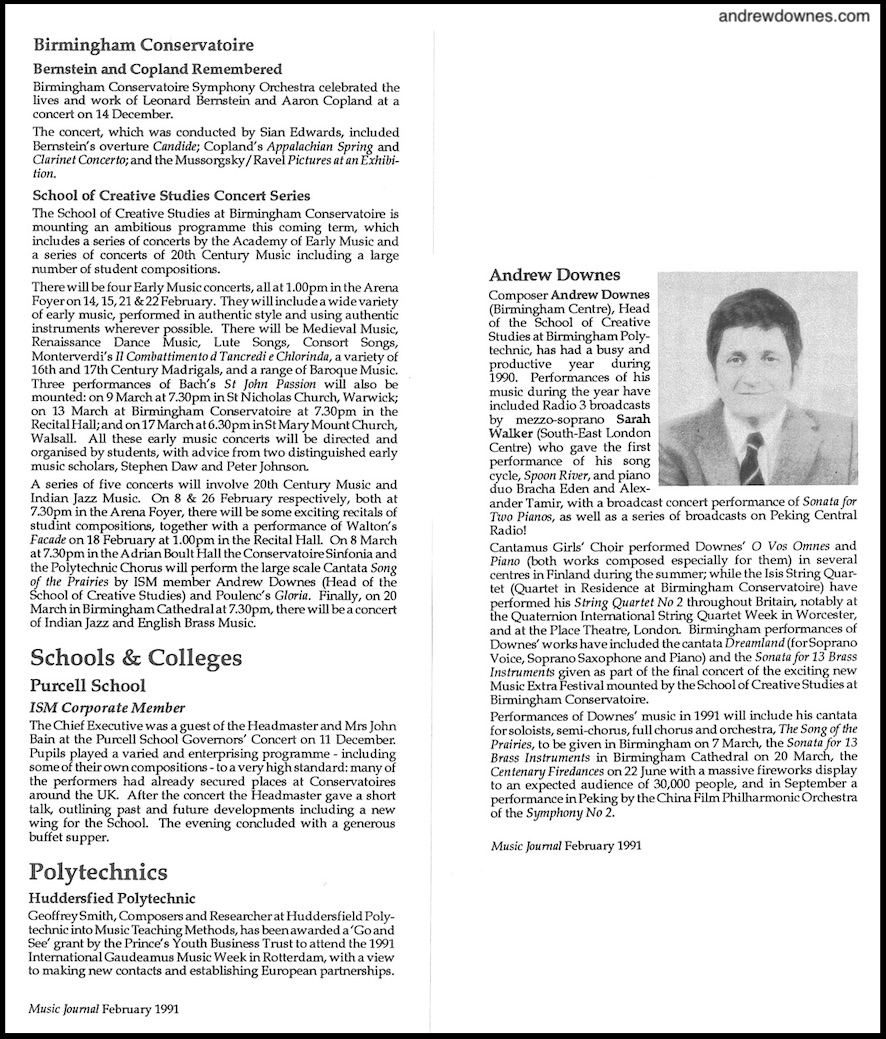 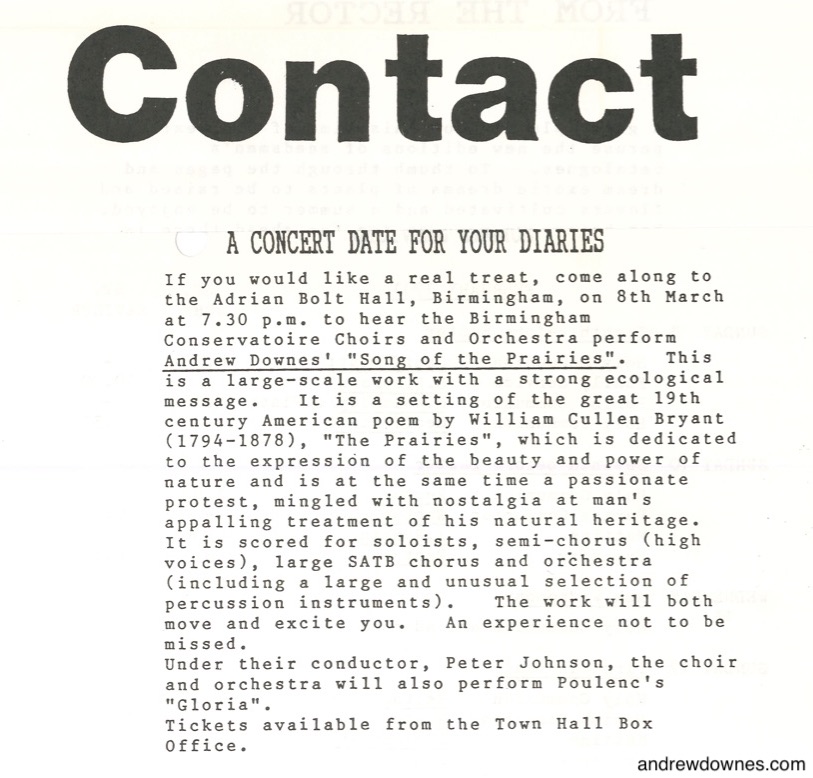 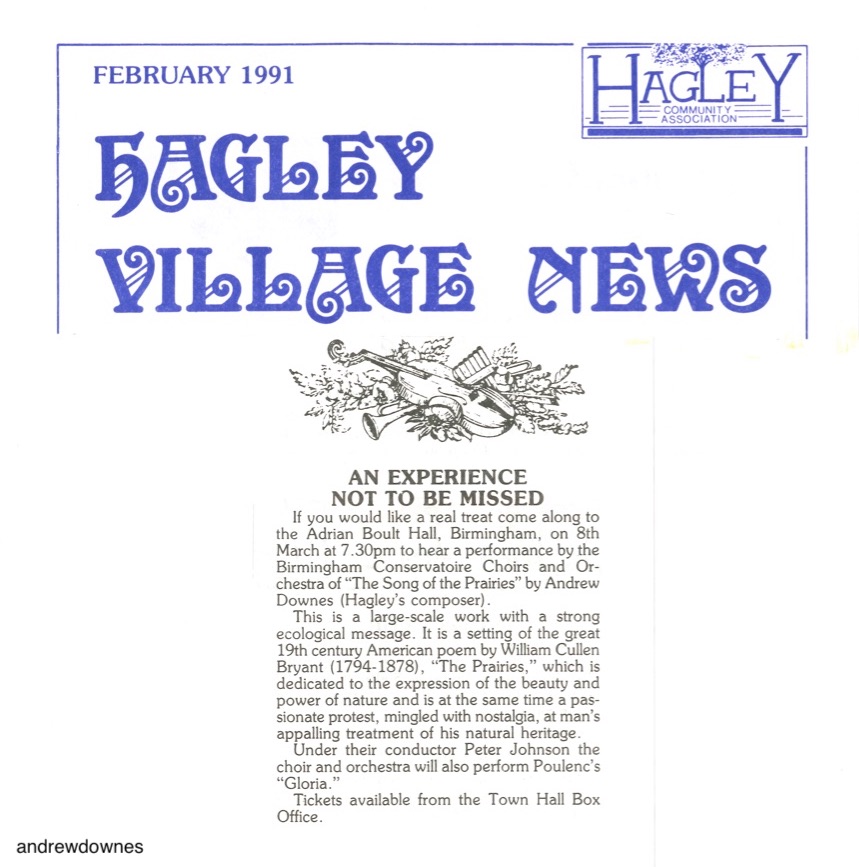 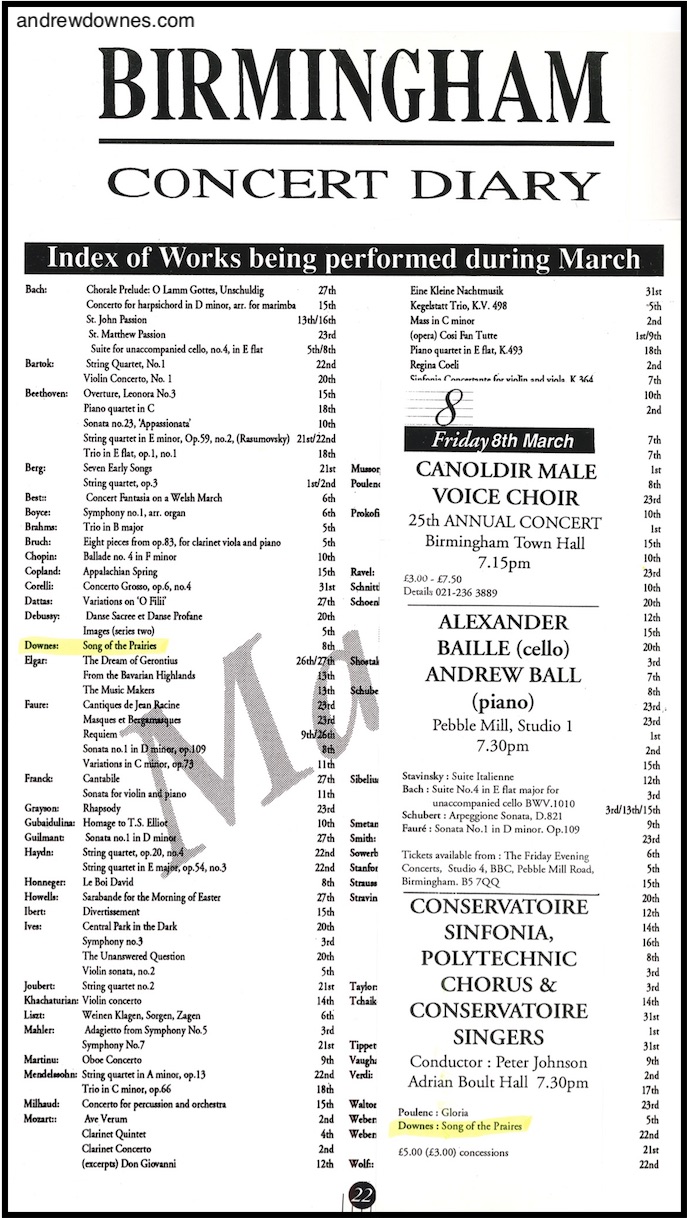 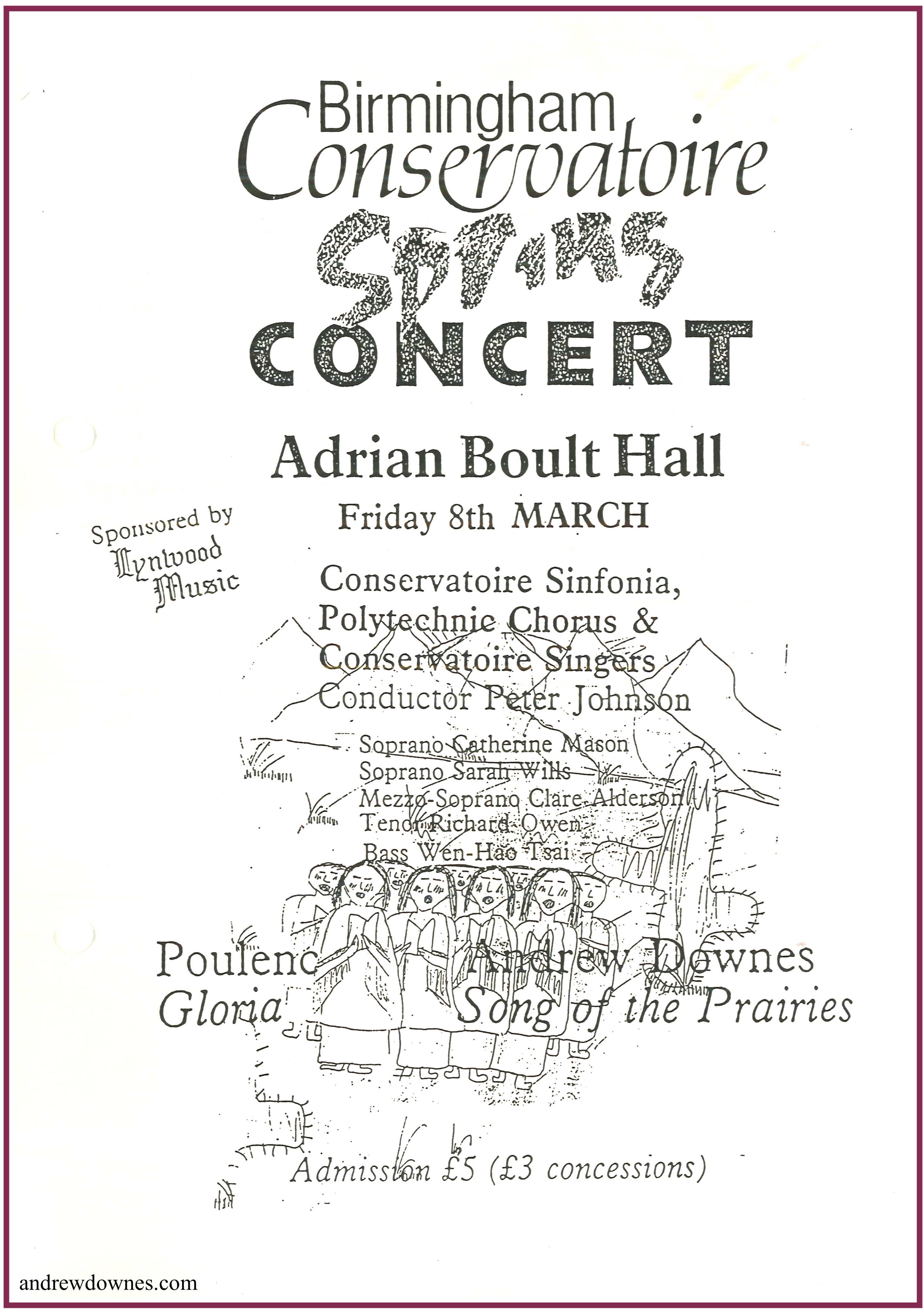 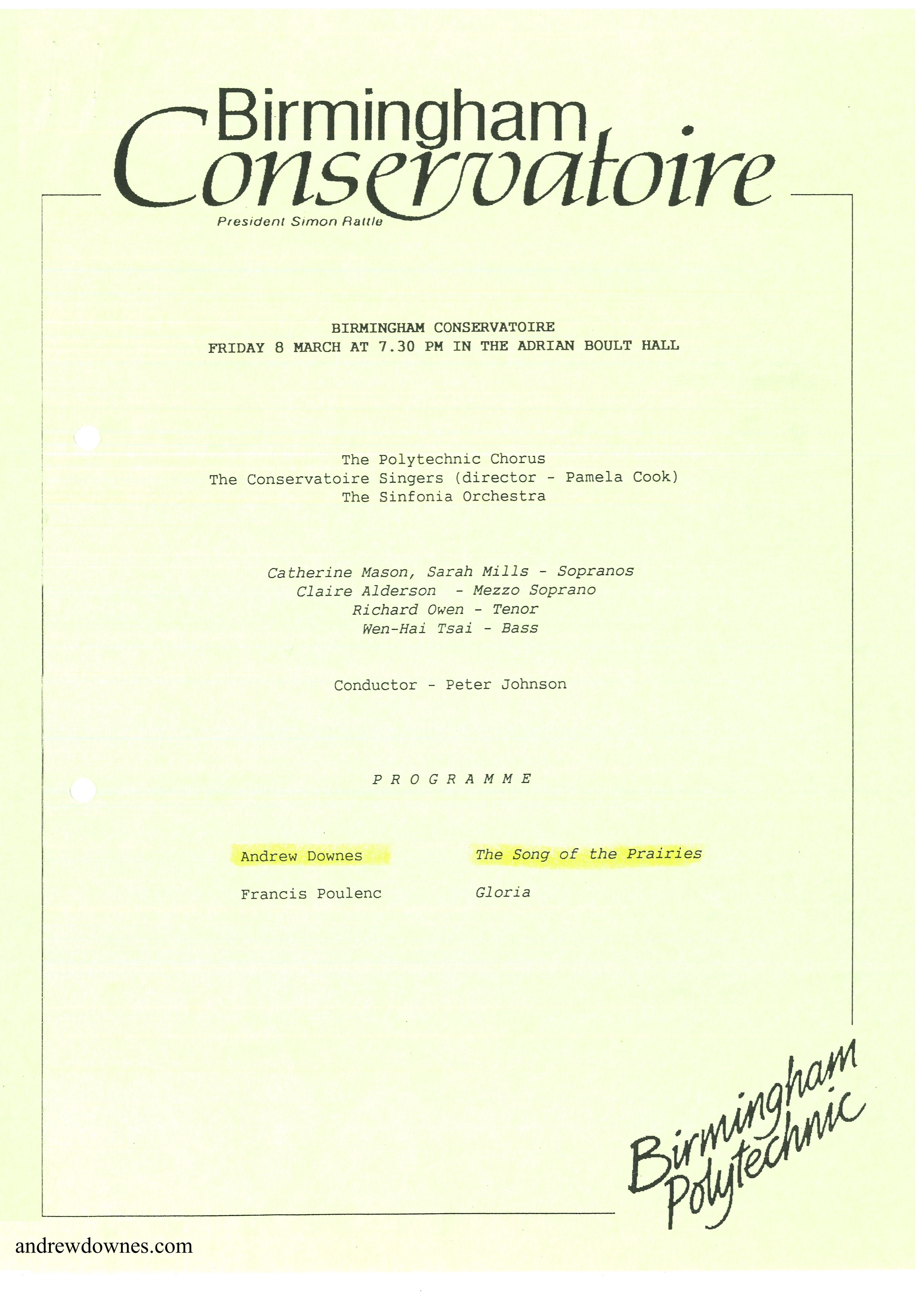 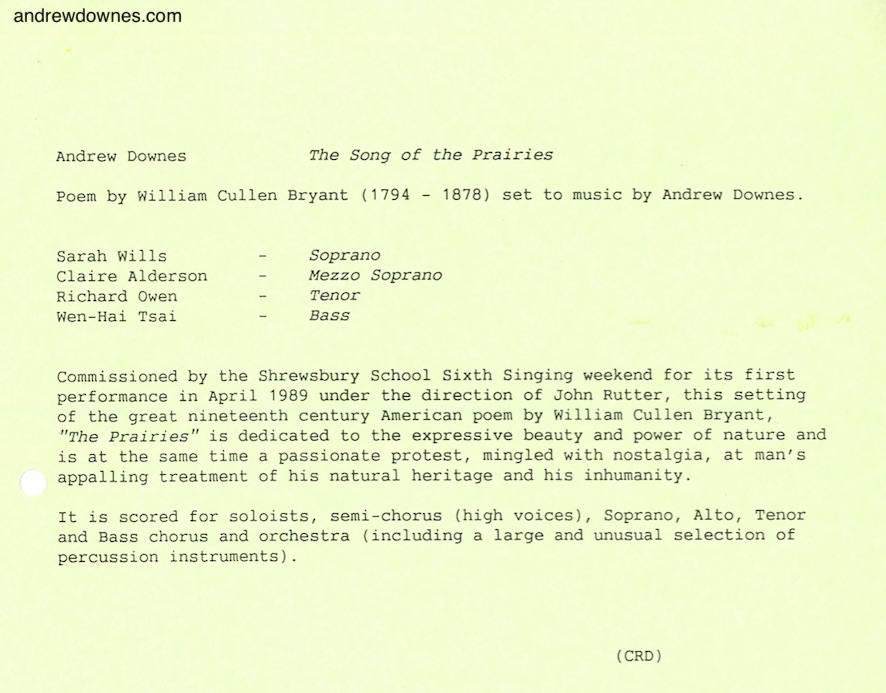 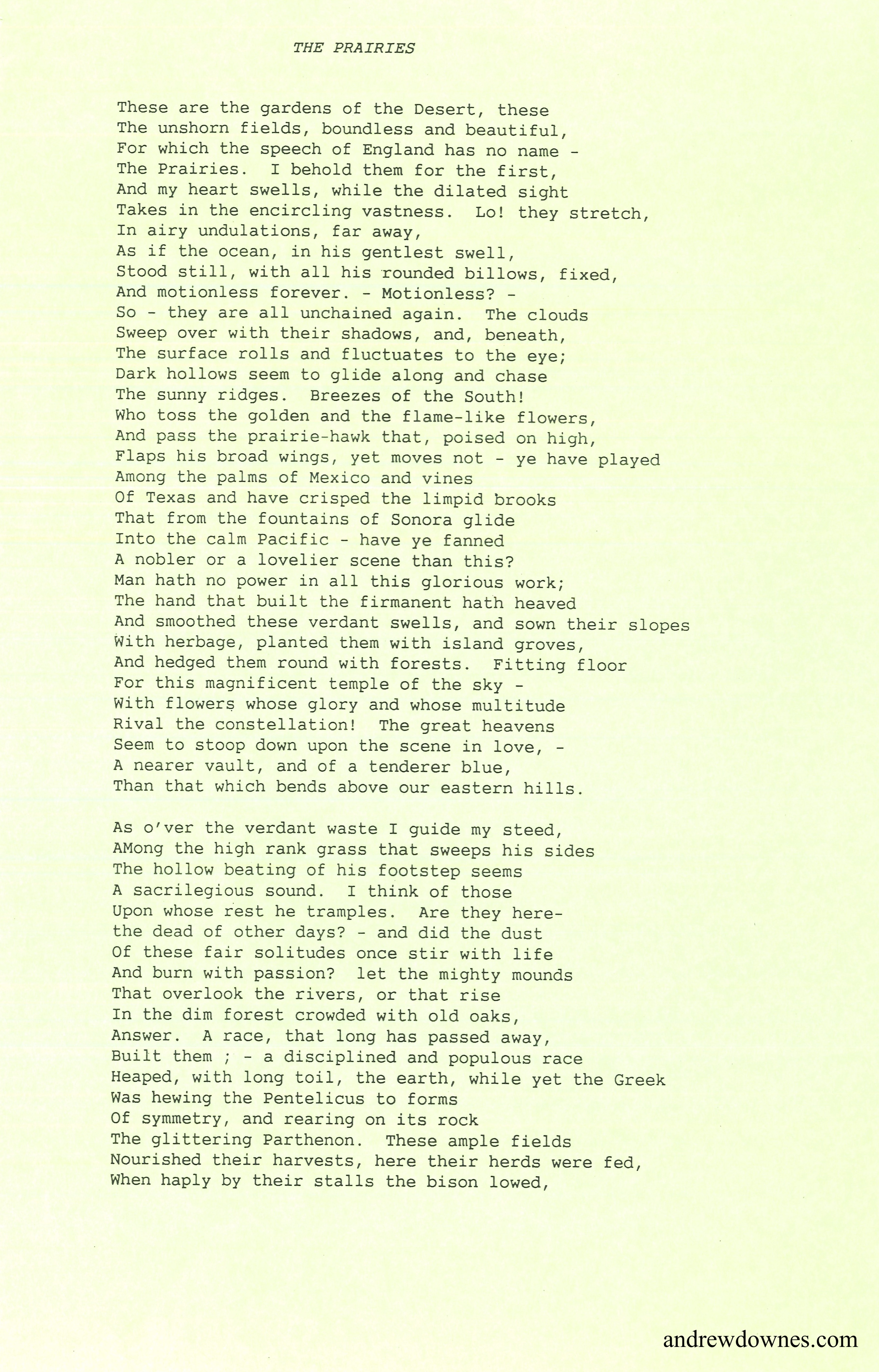 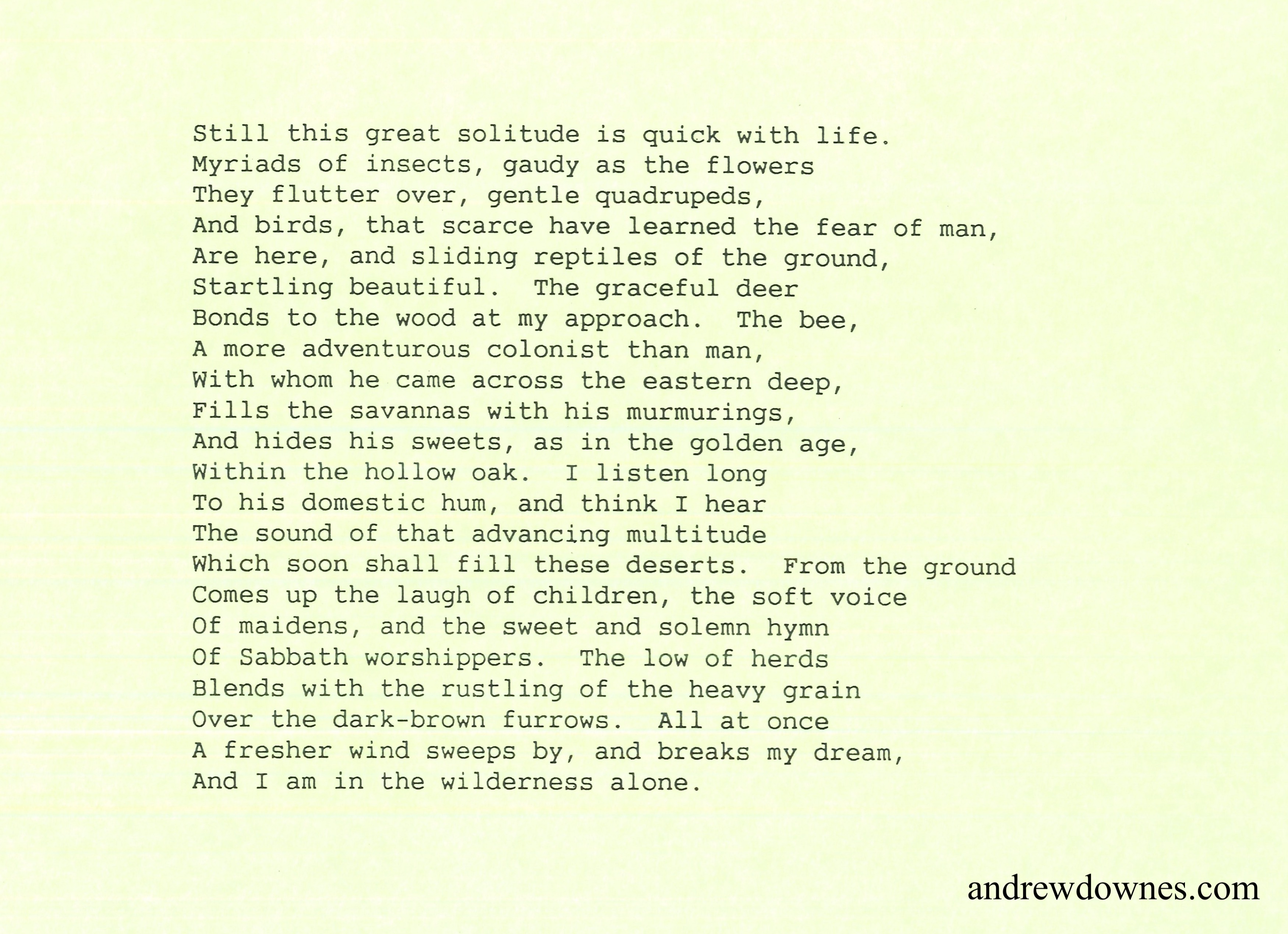 We were thrilled to read the review about this performance in the Birmingham Post next day:

'...the Polytechnic Chorus, Conservatoire Singers and Sinfonia under Peter Johnson performed Andrew Downes' Song of the Prairies with a warmth of sincerity to match that of this popular composer.

'In Downes' typically jazzy/pastoral/reflective style, this major work topically deals with man's destructive influence upon innocent nature, and strikes a chord in us all.'

After that, with the advent of Sibelius, and other computer programmes, I knew that we needed to get the work typeset.  It was too huge an undertaking for me, so in 2019, our daughter Paula began typsetting it, but realising the enormity of the task, handed it over to our son-in-law’s cousin, Paul Trippett, to complete.  Finally, we asked our cellist/conductor friend, Lee Armstrong, who is extremely meticulous, musical and totally knowledgeable of all conventions in music, to do a final proof read.  The typeset score is now complete and totally checked.  Lee is going to extract the orchestral parts and create a vocal score.

On April 3rd 2020, during Andrew Downes' 70th birthday year, Paula Downes and David Trippett recorded an excerpt from Song of the Prairies as a beautiful multitrack performance.