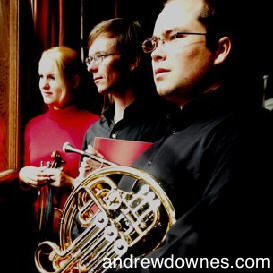 The Brahms Trio Prague is an ensemble with a short history (it was formed in 2005), top quality presentation (see www.vrabcovi.cz) and considerable artistic potential, as its first album shows. In this spoilt, vain, often superficial world the Trio has not chosen an easy path to audiences. Judge for yourself: their combination of instruments is unusual, and some, perhaps all concert organisers naturally ask whether they can fill up the hall; they have chosen a label known only to real connoisseurs and without hundreds of thousands of crown for promotion; and they obstinately offer a non-commercial repertoire. Despite this, or perhaps for this very reason, this is an immensely remarkable project, even a recording that deserves an international gramophone award.

Chamber music is the foundation stone of the work of composer Andrew Downes (1950), professor at a music academy in Birmingham. He also quite obviously loves the French horn and, it seems, Czech musicians. For example, in 2001his Sonata for Brass Sextet had its premiere in the Dvoř_k Hall of the Prague Rudolfinum, where it was performed by the Brass Sextet of the Czech Philharmonic, and a year later so did his Concerto for four French horns and orchestra (recorded in 2003 by Czech Radio). His Five Dramatic Pieces for Eight Wagnerian Tubas were premiered in 2005 in a scintillating interpretation by the horn group of the Czech Philharmonic. His Sonata for Eight Horns and his Sonata for Four Horns are often played on the international scene. The composer's detailed knowledge of the instrument is also evident in the world premiere of his Sonata for Violin, French Horn and Piano. The three-movement work is thematically very tightly conceived, stands firmly on the tried and tested foundations of the 20th century music and has great emotional pull. I don't know the composer's work well enough to generalise, but his sonata has a distinct creative poetry and is appealing to the listener without being ingratiating. The inclusion of this work on the programme is at first sight surprising, but nonetheless rewarding. The Trio in D major by Heinrich von Herzogenberg was a real discovery for me. On the trio's web pages they advertise it as one of the evening's highlights under the heading "Imitator or Unappreciated Master?" It is entirely appropriate to point out the connection with Herzogenberg's contemporary and model Brahms, but this work at least has evident compositional qualities that make it more than just a copy of the Master. He does not achieve the same level as Brahms, but his music has indisputable quality. It reminds me of the debating point from the Venetian Baroque: the pair Vivaldi _ Marcello, the "professional versus the enlightened amateur". Today it is clear that Marcello could not beat Vivaldi, but without Marcello the Italian music of the time would not be complete. The Brahms needs no comment. It is a musical jewel pulsating with life in every bar.

If you think that a chamber ensemble made up of a brass and string instruments and piano cannot produce a homogeneous sound, then you are deeply mistaken. Of course all three musicians have to be brilliant soloists and have to have enough musical empathy. There is no need to write at length about Ondřej Vrabec (1979), who has provided convincing proof of his musical qualities in his role of first horn at Czech Philharmonic concerts. But he has not found the horn enough for his self-realisation, and is emerging as another promising Czech conductor as well. Visit his web site and you will find that he is also a connoisseur of wines with a sense of humour. Monika Vrabcov_ (1983) has abundant study and performance experience abroad, which is now bearing fruit in chamber and in solo play in which she has until now been relatively unknown. By contrast the qualities of Daniel Wiesner (1969) are already familiar to audiences, and he undoubtedly belongs to the Czech piano elite; he has also had the luck to make this recording on an obviously "well played in" Steinway.

Now we arrive at the performance itself, and what is in the Czech Republic a revolutionary approach to recording: the music and sound direction remained in the hands of the Trio, and above all perhaps Vrabec, from the first take to the final mastering. This represents both and advantage and an increased responsibility. The Trio could fulfil its artistic ideas and demands to the last detail, but at the same time are as it were naked before the specialist public. They left themselves with no room for excuses. In the recording technique they went back to the old stereophonic practice of using just a few microphones (at the time of writing I have no data on their origin). Acoustically this is an unforgiving, uncomfortable choice that rules out subsequent proportional modifications but is capable of creating the same effect as at concerts. What is more, in my view it is the path of the future. I was impressed by the very soft, plastic sound of the recording, which testifies to the exceptional acoustics in the Audimax hall. The Brahms for example sounded very compact, the musicians had no technical problems; on the contrary they were able to realise their interpretational vision to the full. Some passages are from the level of dreams, for example the superb honeyed colour of the third movement Adagio mesto, when the horn in pianissimo sound like a mysterious bass clarinet. The Trio's "namesake work" emerges marvellously in every aspect. I know of no better recording!

And another thing. This is the first booklet for a long time that has a witty idea, although after reading the web glossary by Vrabec with the title Horn Clinic I am not surprised.