Andrew Downes talked about his compositions and work as Head of Composition and Creative Studies at Birmingham Conservatoire, UK. 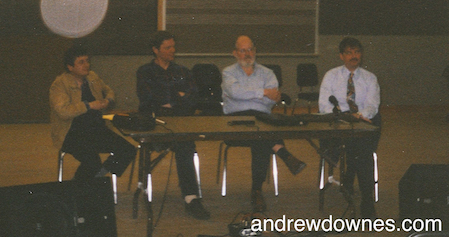 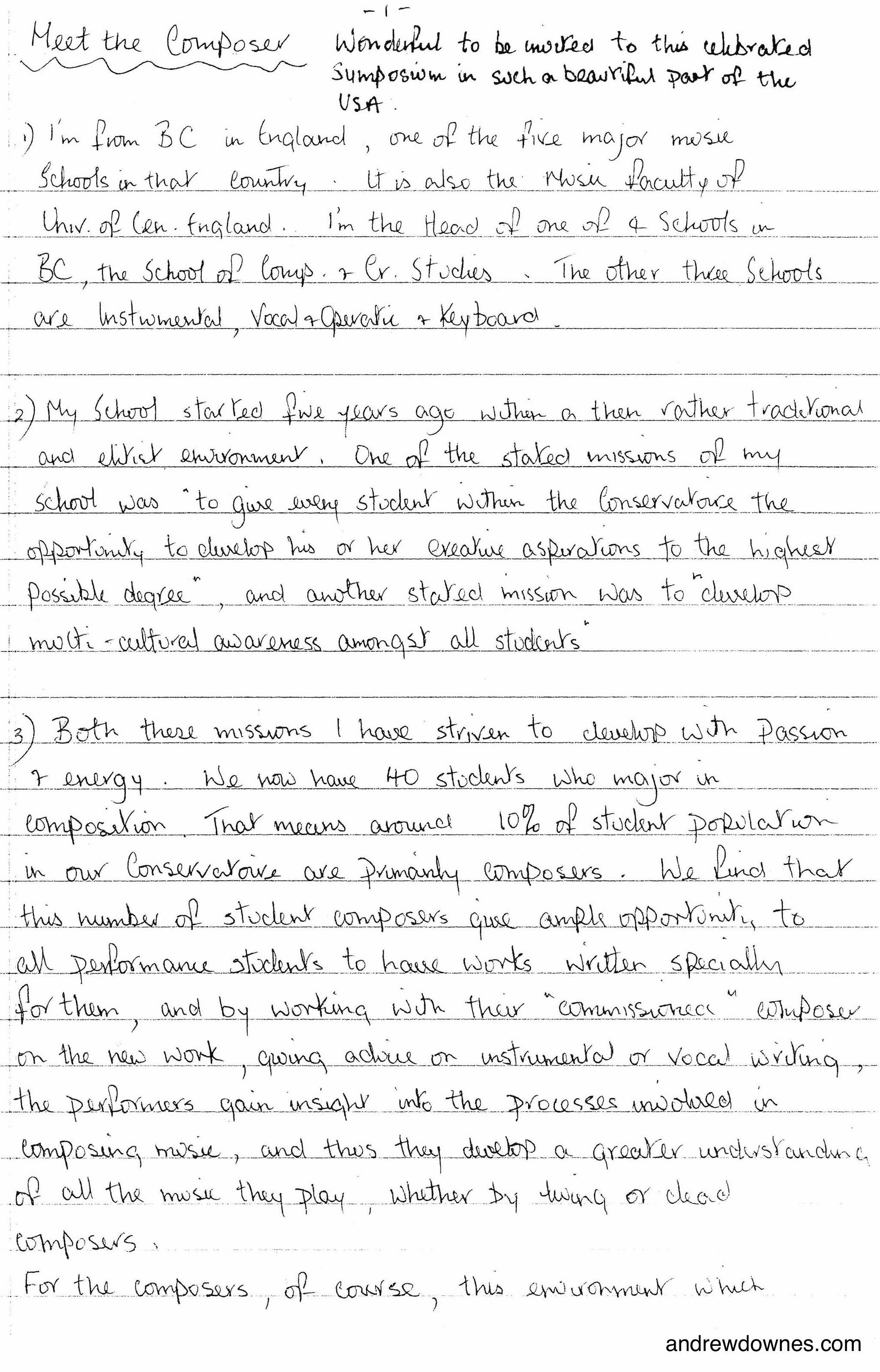 A sample of Andrew's handwritten talk 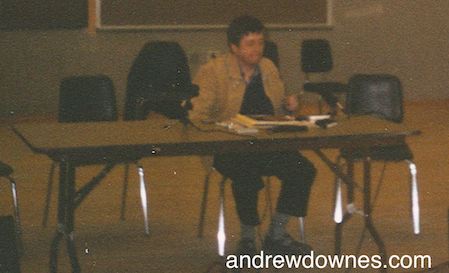 [Here is the typed-up version of Andrew's handwritten notes:]

Wonderful to be invited to this celebrated symposium in such a beautiful part of the USA.

2)  My School started five years ago within a then rather traditional and elitist environment. One of the stated missions of my school was “to give every student within the Conservatoire the opportunity to develop his or her creative aspirations to the highest possible degree”, and another stated mission was “to develop multi-cultural awareness amongst all students’.

3)  Both these missions I have striven to develop with passion and energy. We now have 40 students who major in composition. That means around 10% of the student population in our Conservatoire are primarily composers. We find that this number of student composers gives ample opportunity to all performance students to have works written specially for them, and by working with their “commissioned” composer on the new work, giving advice on instrumental work or vocal writing, the performers gain insight into the processes involved in composing music, and thus they develop a greater understanding of all the music they play, whether by living or dead composers.

For the composers, of course, the environment which greatly encourages the writing of new music for specific players or groups enables them to become fairly deeply knowledgeable about all instruments, and it also teaches them how important it is to get on with and respect the performers who, after all, you hope will give a sympathetic account of your work. After all, if you as a performer loathe the sight of your composer, you’re hardly likely to give a committed performance of her work!

4)   My School gives all Conservatoire students the possibility of opting for practical studies in an enormous range of music, thus giving them the kind of skills and experiences necessary to make a career in music today. They can opt for example for music in the community where they can work for, say, a day a week in a children’s hospital, developing music therapy skills, or in a homeless or unemployment centre, or a special school for physically or mentally handicapped children. Or they can opt for studies in pop music, jazz, technology-based music, or one of several units in music from around the world.

5)   This “World Music” area is one very close to my heart, and indeed we are the only music school in England to offer practical World Music courses to degree and post grad level. We are, for example, the only music school in Europe to be a member of the Indian Music Congress. Last year I visited Calcutta in India, and also the University of Burdwan in Bengal in order to create a liason whereby their university would give official validation to our new B Mus course in Raga Sangit, the music of Bangladesh, Pakistan and India. This liason has now been officially approved by the Government of India, and we hope to admit the first students onto the music course in the fall of 1996. We feel it to be very important that such students gain a first hand knowledge of the way of life, atmosphere and feelings described in Indian music, and so the 3rd year of the four year course will be spent in India!

6)   Indian music is one of our major developments at present, but we also have programmes in Javanese Gamelan and African music, and fully intend to develop programmes in many other world musics, including, I hope, Native American music, in which our Head of World Music, Dr Mark Lockett, has a special interest.

7)   These developments in multi-cultural awareness have had a very profound effect on me as a composer. I’d like to play you the first movement of my Symphony No.3 composed in 1993. This piece has a lot of exotic percussion instruments playing in a kind of multi rhythmic style influenced by the music of tribal Africa. It also has a part for drum set which reflects my excitement about good pop music, and was also meant to surprise the rather staid, middle class people who made up the majority of the audience at the first performance. [Here it is performed by the Czech Philharmonic Orchestra.]

9)   This music, which exists simply as melody alone is absolutely complete, and by being a single line allows for a certain improvisatory freedom in rhythmic nuance. As soon as you start adding parts vertically this freedom to improvise goes and gets less and less as more and more parts are added. It seems to me that melody or memorable line is essential to music … I feel that audiences cannot respond emotionally to music unless there is something memorable about it and it seems to be part of nature that the ‘tune’ is the thing most people remember after a concert. That’s why pop music is so successful, and why very few people can appreciate serial or avant garde music … there is nothing memorable about it.

10)   This view is surely borne out when one hears music from virtually every part of the world. In gamelan music, although there are many parts, each has a discernible line and, once one gets used to the different tuning, each line is very memorable. In Indian music, there is no harmony except that provided by the drone instrument, the tanpura. Instead there are fantastic variations on a very memorable melodic structure or raga. It’s very interesting to note that these ragas have much in common with the internal relationships of Western Modes … indeed the Raga Yaman, for example, is intervallically identical to the Greek Lydian mode.

I’ll just play you a few seconds of the opening section of a raga, in this case the Raga Hemant. It’s played here by a wonderful sitar player, Nikil Banerjee.

11)    Another wonderful example of memorable melody in natural folk music is in your own Native American music. I’ll play a little of a Pueblo Indian song. It is extremely beautiful, and I can’t get over how similar in idiom it is to some Irish and British folk music … indeed, exactly the same modal structures which create the same feelings of longing, sadness or joy are used here. Many African melodies use similar modal sturctures to this.

12)    My own music is strongly influenced by this conviction that melody is the most memorable and natural part of music, and thus is essential to me.  I’ll play the first movement of my “Sonata for Violin and Piano”, a work which demonstrates this passion for melody, and is also influenced by melodic structures from around the world, particularly the ragas of India. Indeed, when it was performed last year in Calcutta, India, many people in the audience said how Indian much of it sounded … this was music to my ears. [Here it is played by his daughter, Anna Downes with pianist Tony Bridgewater.]

13)   I said earlier that my earliest musical experiences were as a singer, and I’d like to end by playing 4 short pieces of unaccompanied choral music. The first is a short anthem “O love the Lord all ye his saints”. This was written for a BBC broadcast in 1984. [Here it is performed by the Chapel Choir of Royal Holloway College, London.]

14)   The final demonstration is three excerpts from my “St Luke Passion”, written in 1993, and performed at the end of that year at the Crane School of Music, Potsdam College, State University of New York, with me conducting! Although the work is a long one, and has orchestra and baritone solos, these three choral excerpts lie at the heart of the work. The first “Judas Mercator Pessimus” describes the “wicked merchant Judas betraying the Lord”. [The two excerpts below were performed in King's Chapel, Boston in 2006 by the Millennium Scholars including himself, his wife Cynthia, and his daughter Paula.]

The second, which is preceded by the words of Jesus “Father forgive them, for they know not what they do” is a setting of the Latin text “Tenebrae Factae Sunt” … “there was darkness when they crucified Jesus”.

The final excerpt, which comes after the account of the resurrection, is a setting of the “Credo” … “I believe in One God, the Father Almighty”. [Performed here by the Birmingham Conservatoire Choir in 1997.]