"From Bombay Spray to Dehli Belly, via Calcutta Splutter and Burdwan Flan" 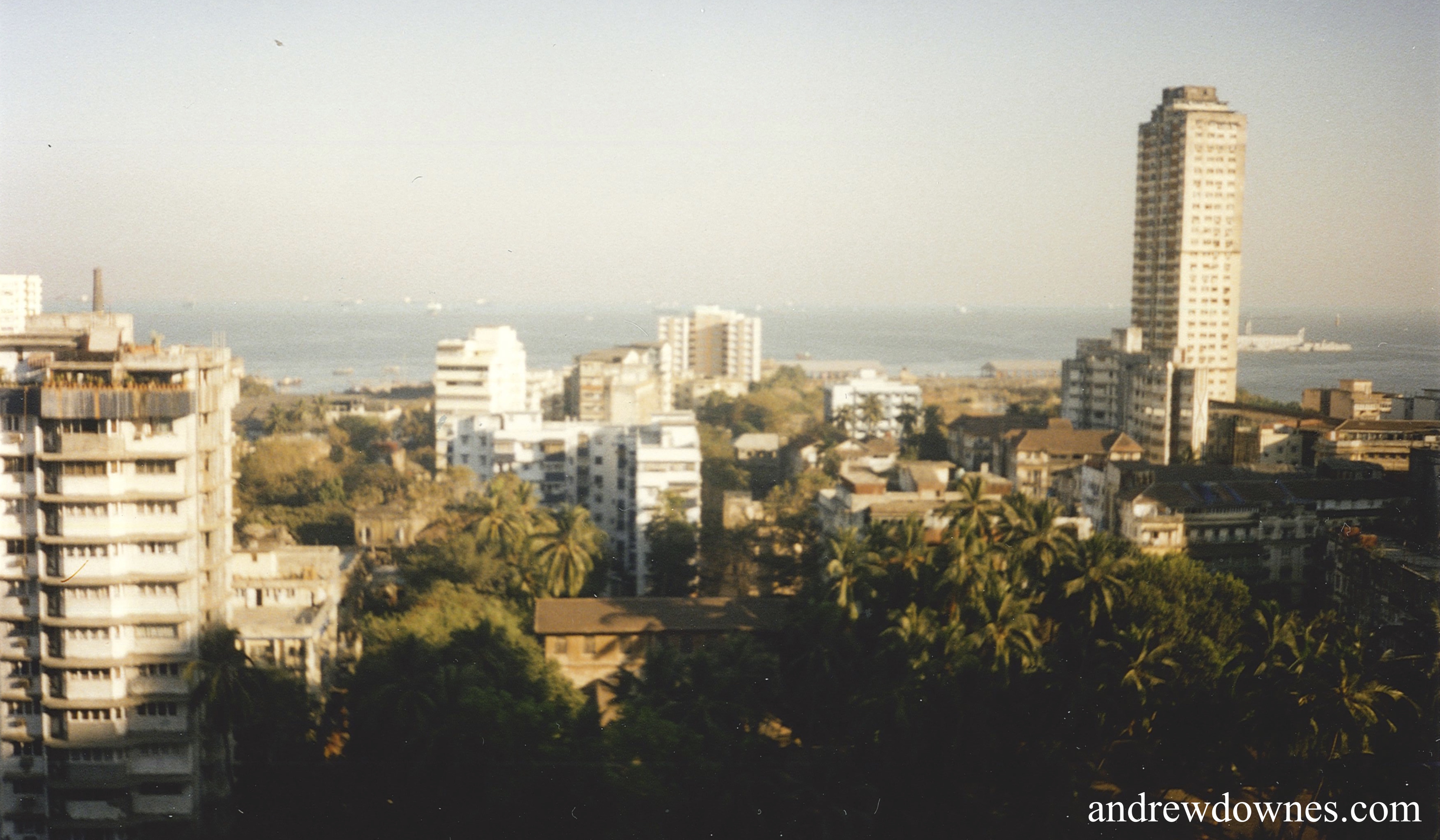 Both from the points of view of international prestige for the Conservatoire, and educational benefit of the students concerned, this tour, taking place in Bombay, Calcutta, Burdwan and Delhi was an outstanding success. The major sponsors, AIR INDIA, due to their delight at the quality of the concert given in their auditorium in Bombay have already invited other Conservatoire groups on the same sponsorship basis, and discussions with other major agencies in India such as MANTRAN are likely to yield similar benefits. Indo-Jazz Fusions, playing works by John Mayer, Jonathan Mayer and Andrew Downes (Mela Kamavardhani) appeared three times on STAR TELEVISION, the Indian equivalent of SKY, and students were interviewed on the same programmes. In Delhi, John Mayer and I held discussions with the University Vice-Chancellor, Prof. Mehta, and the acting Head of Music Prof. Chowdhri. They expressed great enthusiasm at the idea of hosting the third year of our B Mus in Raga Sangit, and look forward to early discussions with Mark Locket.

At 4am on a cold Saturday in February (10th), David Brock (bless him) picked me up in the University minibus, and we drove to Cambrian Hall to collect a number of students, already the worse for drink it seemed, and a large body of equipment and suitcases. We proceeded to Heathrow, and caught the noon flight, Air India 188, bound for Bombay.

We arrived at Bombay at 5.30am, and the smell hit us immediately!

There seemed to be no one to meet us, so we decided to catch the next flight home, but all of a sudden a small man in a Maharaja uniform (the emblem of Air India) announced his intention of driving us into the city. He was speaking in "foreign", I think Hindi, so it's a good job we had Ranjit and John with us.

All the instruments and equipment were piled into what looked like a circus lorry, and after paying lots of rupees to several people, some of whom had helped, and others who said they had helped, we proceeded along a dusty, smelly and bone shaking road into the City of Bombay where we were deposited at the YMCA.

It seemed that one of the sponsors had pulled out at the last minute, and so our accommodation had been switched from the 5 Star President Hotel to the said YMCA, rather a difference we felt! And so it turned out. There were cockroaches in Chris Featonby's bath, and for the first morning we all shared a room meant for two people.

We decided to return home immediately, but on conveying our intention to our local sponsors, we were surprised to find that the money for the President Hotel had somehow reappeared, and we were taken to this sumptuous place the next morning (12th February).

That evening, Indo-Jazz Fusions gave their first concert at the Air India Auditorium in Bombay, and it was a great success. The concert was recorded by Star Television, and shown three times on subsequent days. There were TV interviews and a great deal of press coverage. After the concert there was a dinner hosted by Air India, followed by a quantity of alcoholic beverages after which one member of the party got his head stuck in the doors of the President Hotel lift!

Concert at the Air India Auditorium in Bombay

On Tuesday 13th February the band gave a concert at the Patkar Hall Bombay. All the players did a splendid job, the jazz solos being particularly exciting---last night's revelry certainly added to the creativity of all concerned! 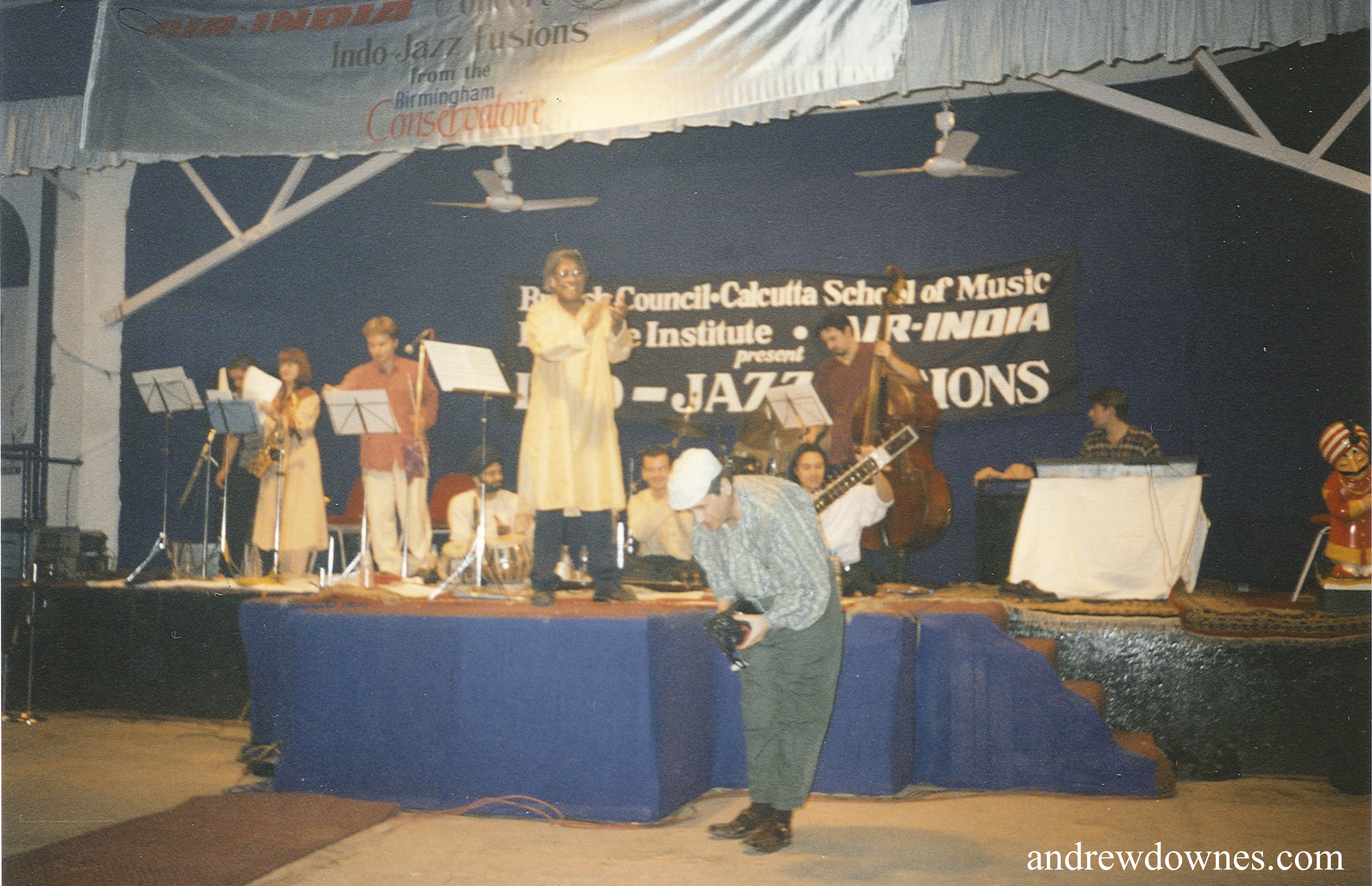 Andrew taking a bow at the concert at the Patkar Hall, Bombay

On Wednesday February 14th the important people took a limousine to the Domestic Airport, whilst all the players piled into the back of another circus lorry with the baggage and instruments. They certainly knew their place by this time!

Despite their preference for elastic powered aircraft, the Indian Airlines flight to Calcutta proved uneventful, and on arrival we were driven to the Ramakrishna Mission Institute of Culture

International Guest House. The accommodation, though basic, was (for India) clean and comfortable, and had beautiful gardens with orange clad Buddhist monks wandering around them.

On February 15th we took a tour of Calcutta, for me the most disgusting, odourous and squalid city on Earth. Otherwise I love it. We went to the Zoo, and if you think English Zoos are cruel you haven't seen anything!

On February 16th, while the Band rehearsed at the Calcutta School of Music, I was taken to meet Rajendra Kumar Bhatia, General Secretary of Mantran, an organisation involved in fostering cultural exchanges. They were particularly interested in our Composers Ensemble, our Jazz Ensembles, and our Irish Folk Ensembles, as well as our African Drumming Ensemble run by Jahman. I intend to follow this up as visits of this kind are of such benefit to our students.

In the afternoon I took a taxi to the International Airport to change 1100 Dollars into rupees, 37710 rupees in fact, a fortune in India, and enough notes to fill a lorry! I was very nervous about carrying all this money, so I took Ranjit, Chris and Peter (a Karate expert) as bodyguards! It felt like Al Kapone meets the Mafia! The money was to pay for our accommodation which could only be paid in rupees.

On Wednesday February 17th, following a relaxing morning, the Band rehearsed for their evening concert at the Dalhousie Club, an impressive outdoor venue in the heart of the city. The hired sound system took an age to erect, and when it was up it sounded "cr-p" according to A Bratt! However, in the evening, the sound man seemed to get his act together, and the concert was an outstanding success, the best of the tour I think.

After the concert I complimented the sound man, and he kissed my smelly feet and asked me to bless him! I was thinking of introducing the feet kissing bit into the Conservatoire! 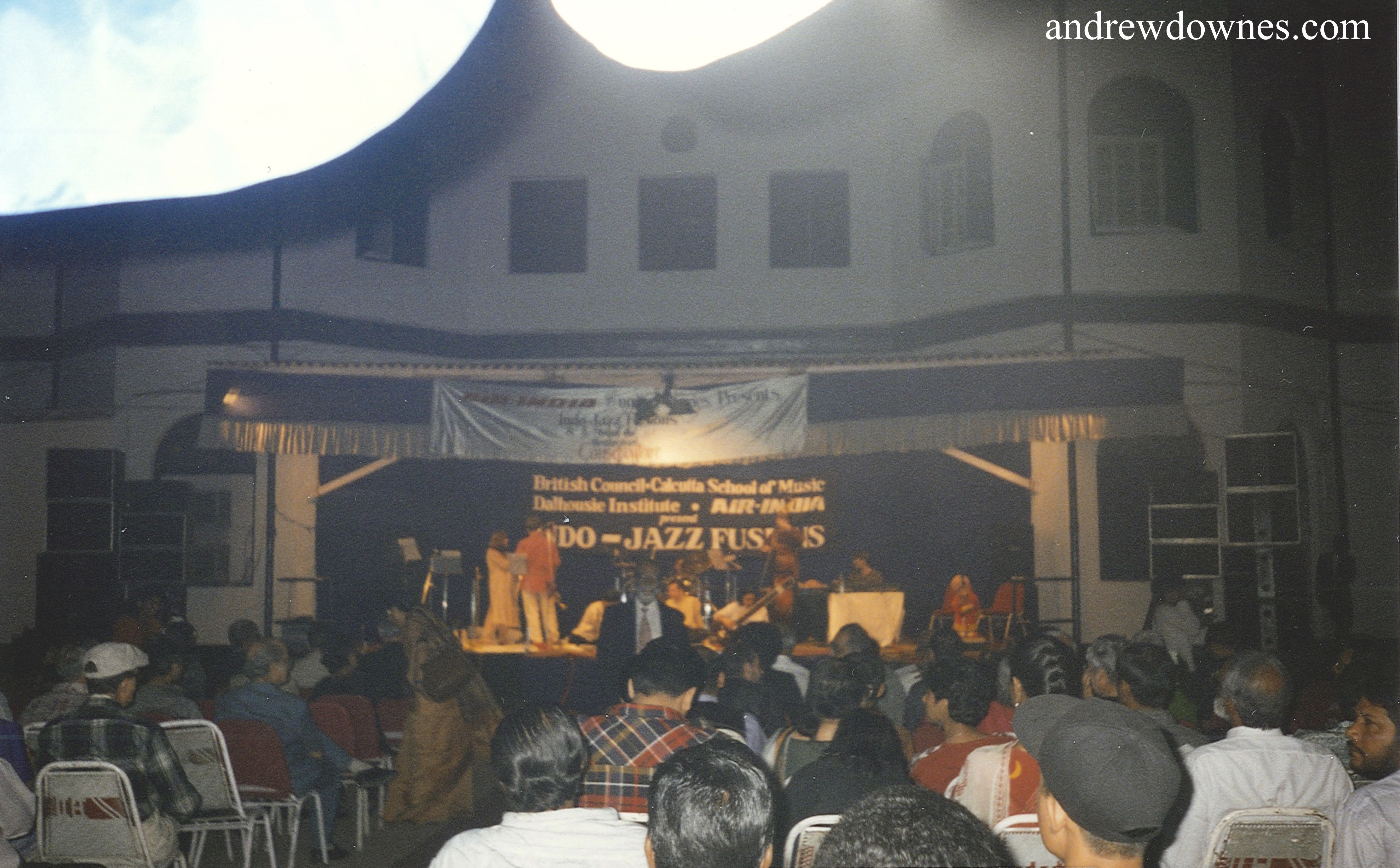 Concert at the Dalhousie Club, Calcutta

On February 18th I met Mark Wynn, Conductor of the Calcutta Symphony Orchestra. They would be very interested in inviting some of our instrumental staff to help develop their playing, and I promised to investigate this idea together with similar requests from the Calcutta School of Music. I also said I would ask Rob Allen if there were any redundant sets of Orchestral (particularly string orchestra) music in our library.

In the afternoon I gave a lecture on English Music at the Calcutta School of Music, and the Band did an informal Workshop/Concert for the Calcutta students. 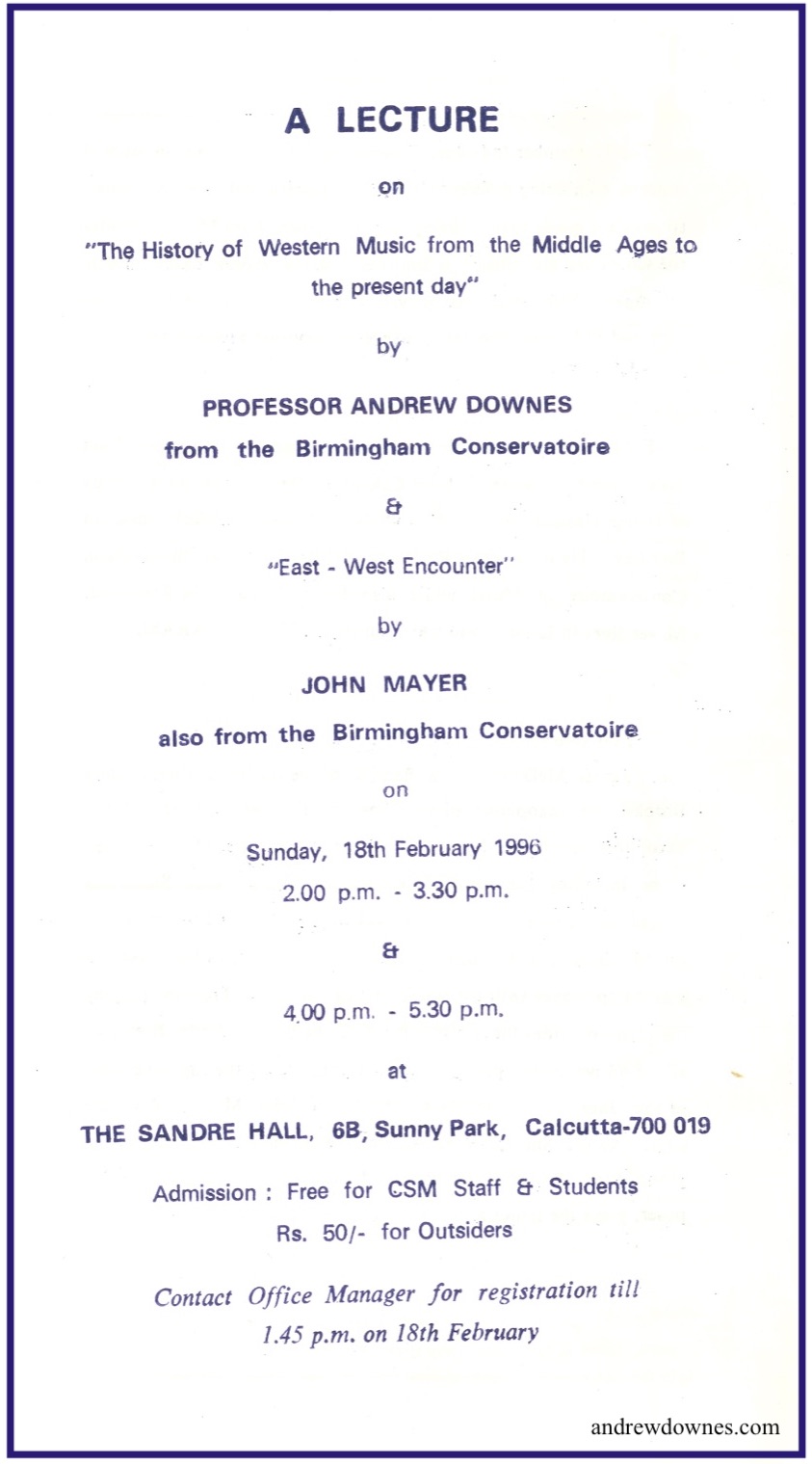 Early on February 19th we set out on the most dreadful bone and bladder shaking journey I have ever known, in the direction of Burdwan. This 80 mile bus trip took 6 hours along bumpy and primitive dirt tracks with pot holes big enough to lose an elephant! We were met in Burdwan by our dear friend Jayasri Banerjee, and taken to the University Guest House. In the bedrooms were lizards running around the walls, and swarms of playful mosquitoes dancing in the sunlight!

Actually, this area of Bengal is exquisitely beautiful, but can only be appreciated if one is prepared to rough it a little, something our group did not seem able to cope with.

The concert in Burdwan City Hall was a great success, and was attended by the Vice-Chancellor of Burdwan University, Mohit Bhattatcharya, a man always accompanied by a lawyer!

We returned to Calcutta the next day, and after a relaxing afternoon and evening, we set out for the Airport in the middle of the night to catch the Indian Airlines flight bound for Delhi at 6am on the 21st February.

On arrival in Delhi, we were taken to the lovely University Guest House whose gardens were full of monkeys and parrots. The Band gave an evening concert, much enjoyed by the audience, but lacking a proper balance due to an inadequate sound system.

On Thursday 22nd February at 5.30am, we set out on a coach excursion to Agra and the Taj Mahal. Like the earlier journey to Burdwan, this journey was horrendous, but any privations and aching limbs were soon forgotten when we first set eyes on this wonderful gleaming marble edifice. It was truly magnificent and will be remembered by all forever! 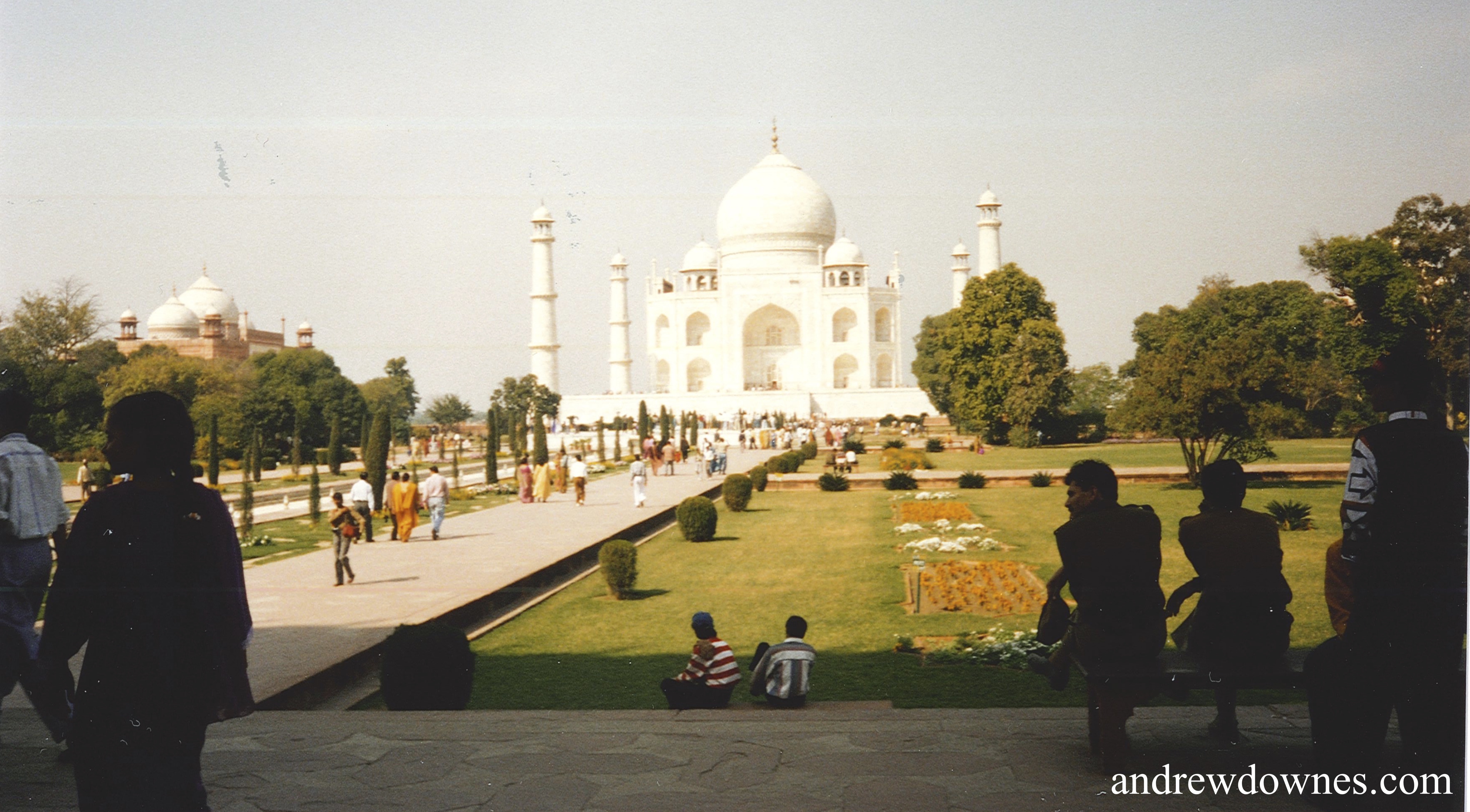 On Friday 23rd February we moved to the International YMCA Guest House in central Delhi to prepare for the final concert of the tour. Our Delhi hosts arranged a rooftop dinner and drinks party, and a good time was had by all.

Saturday 24th February, the last day of the tour, ended with a splendid outdoor concert in central Delhi, attended by a very large and enthusiastic audience. The band pulled out all the stops, and I have to say that by this time they were an ensemble of which we can be truly very proud. 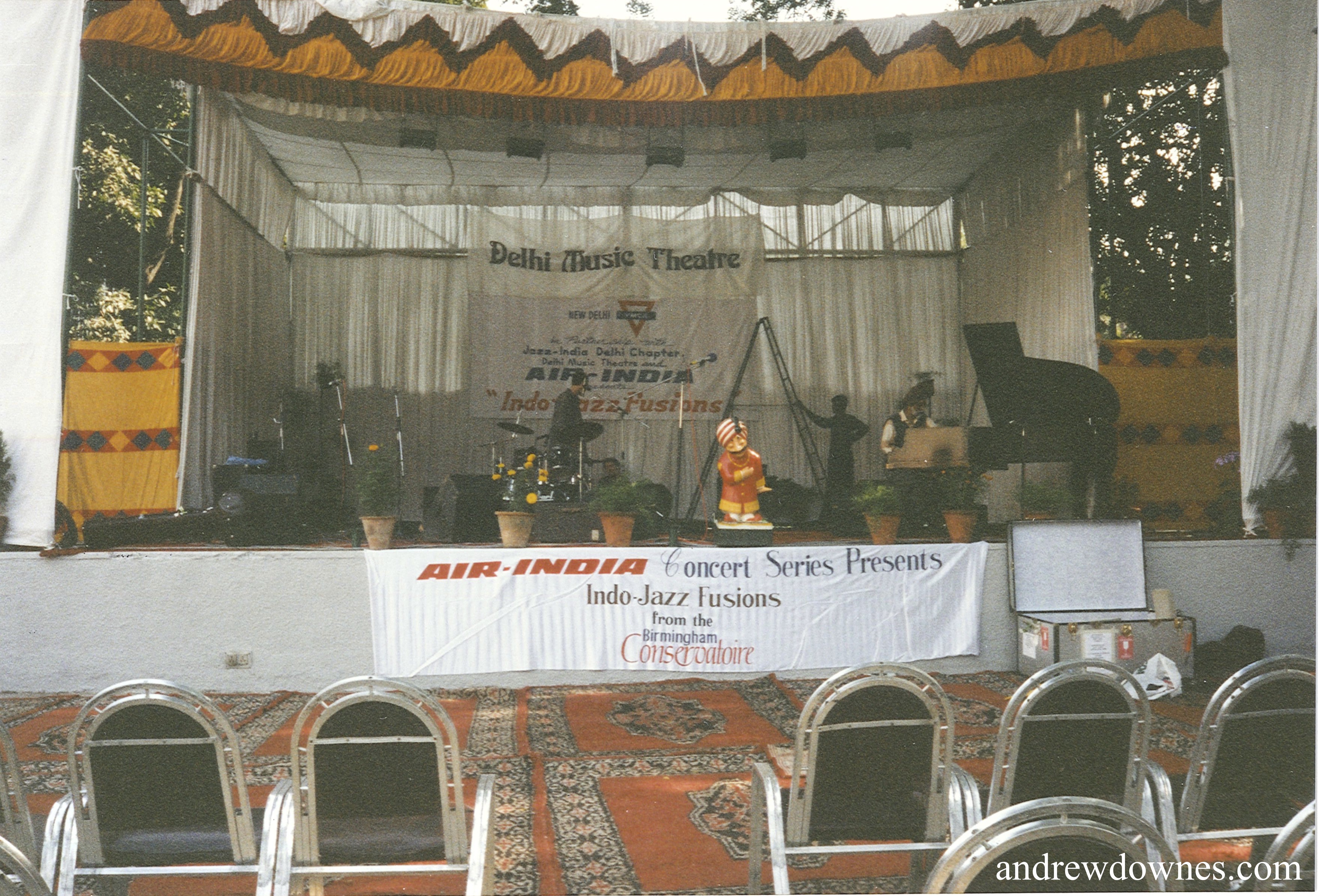 Concert at the Dehli Music Theatre 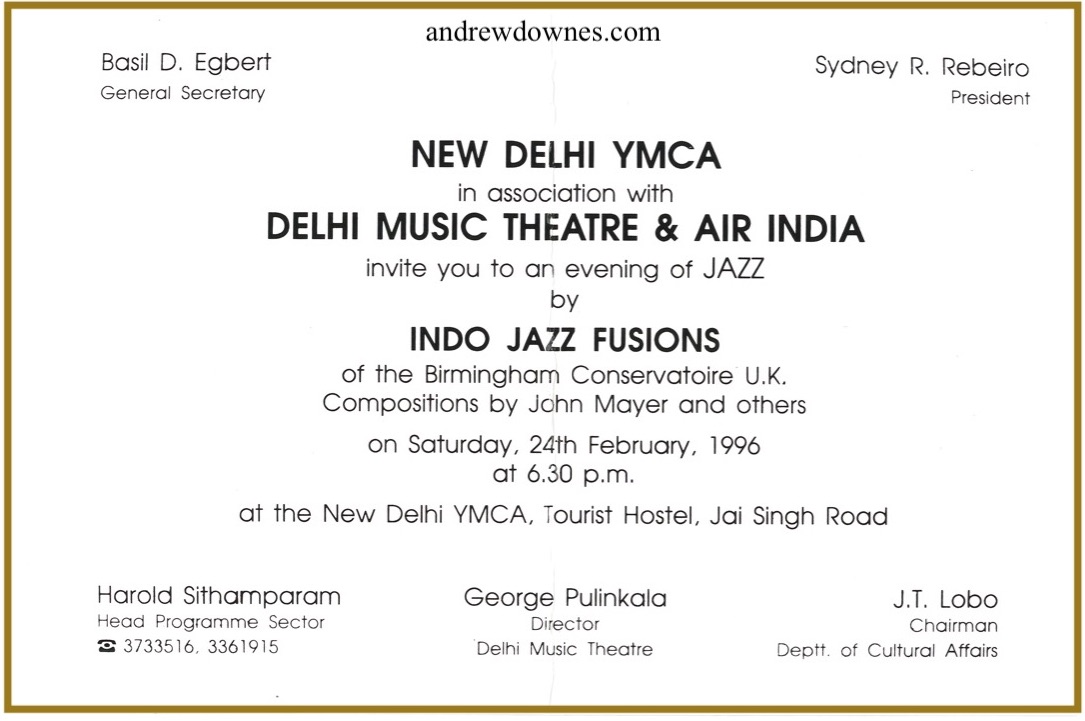 Invitation to the concert

Early the next day we were taken to Delhi Airport for our flight home, and after an 8 hour delay and an exhausting 10 hour flight we were met at Heathrow by a smiling David Brock, a truly lovely sight after such a rigorous schedule! 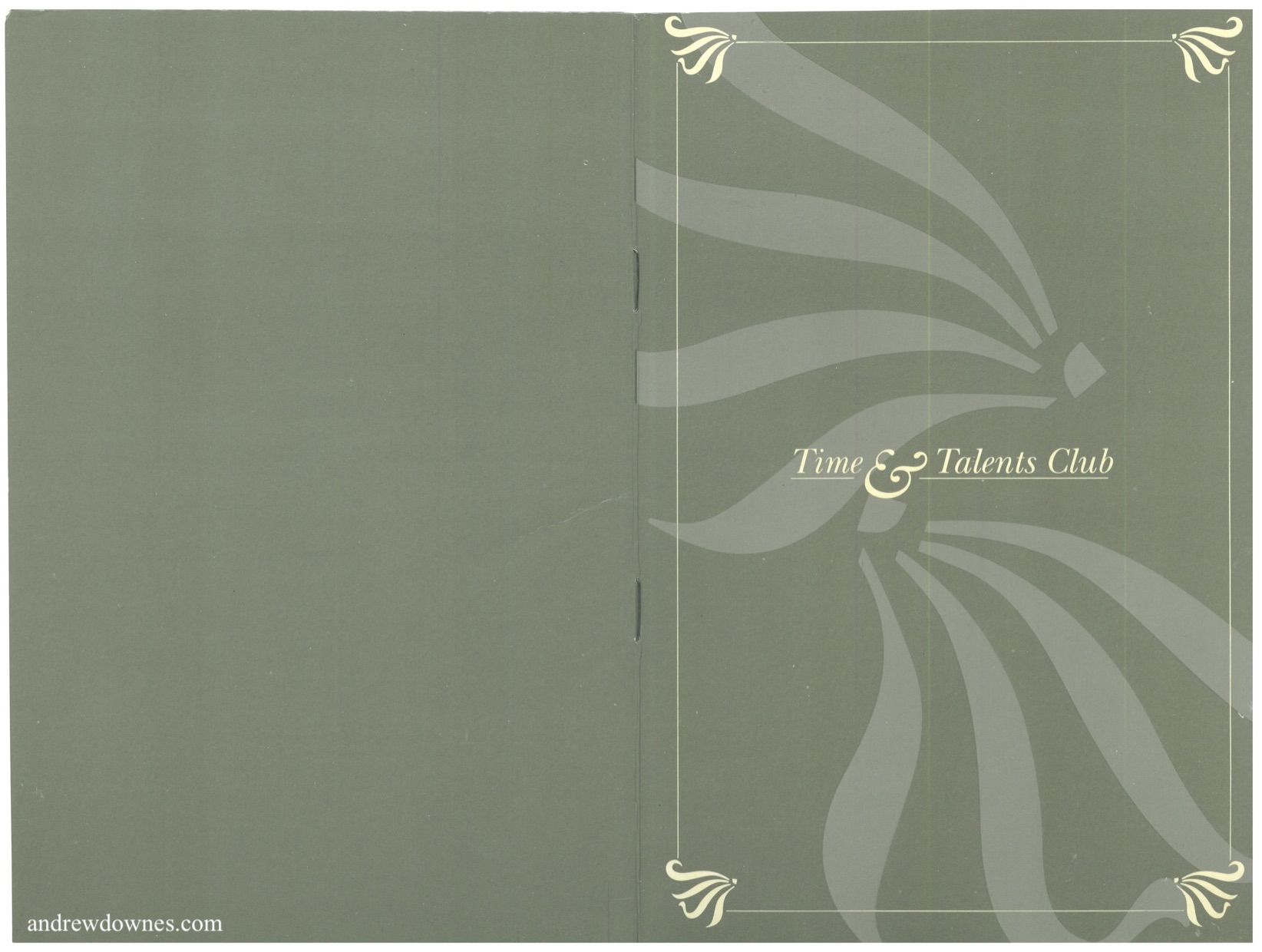 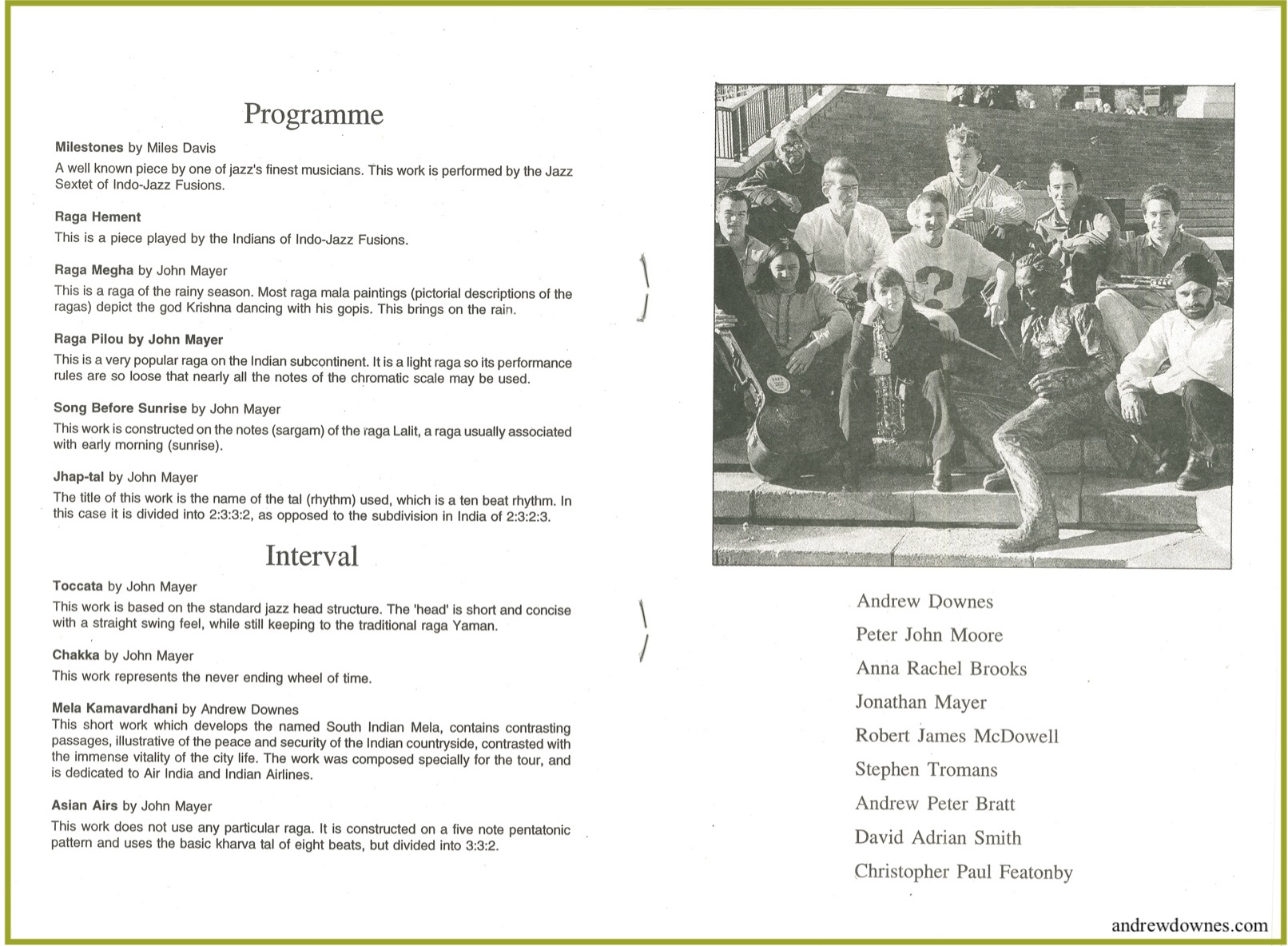 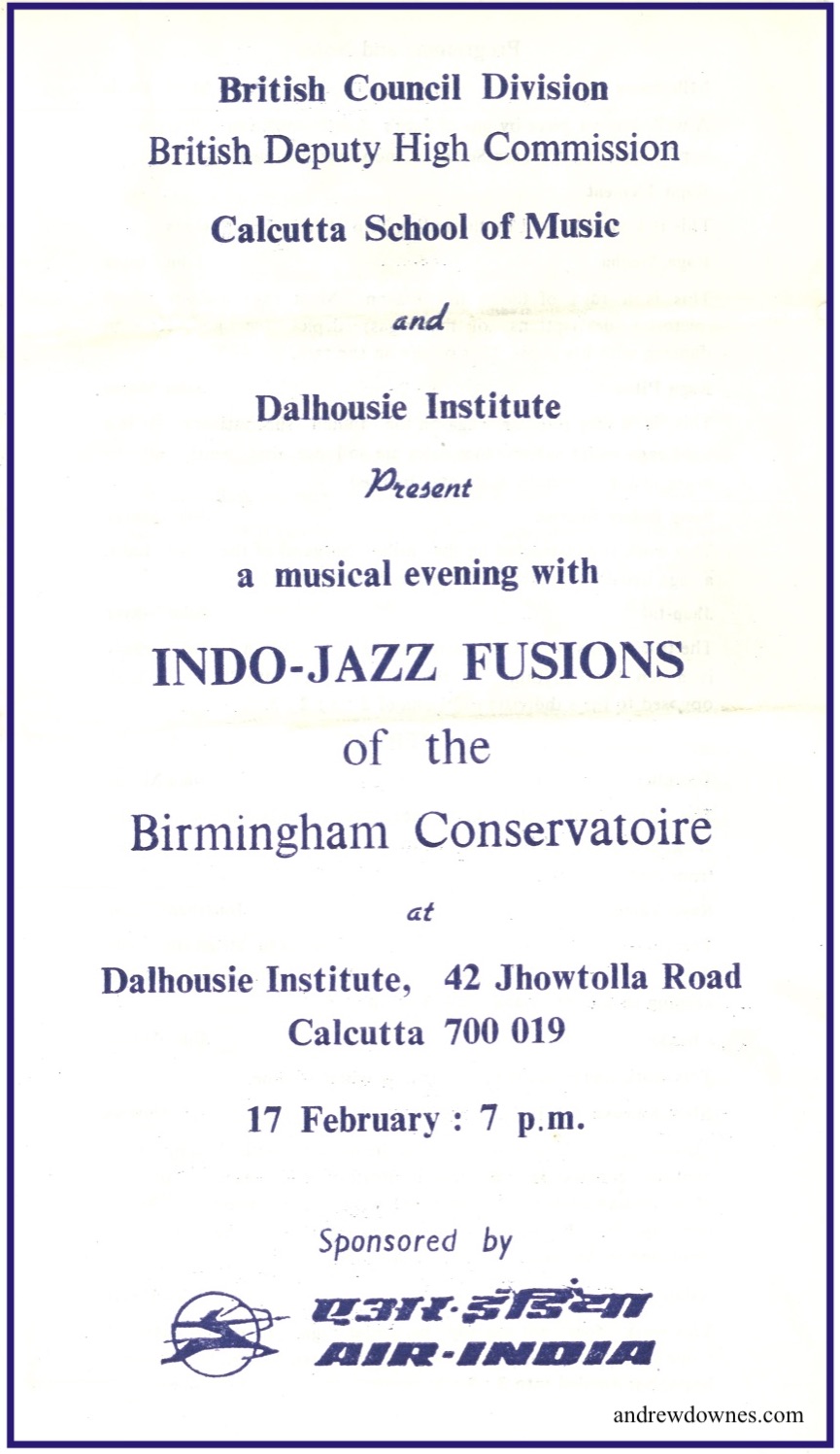 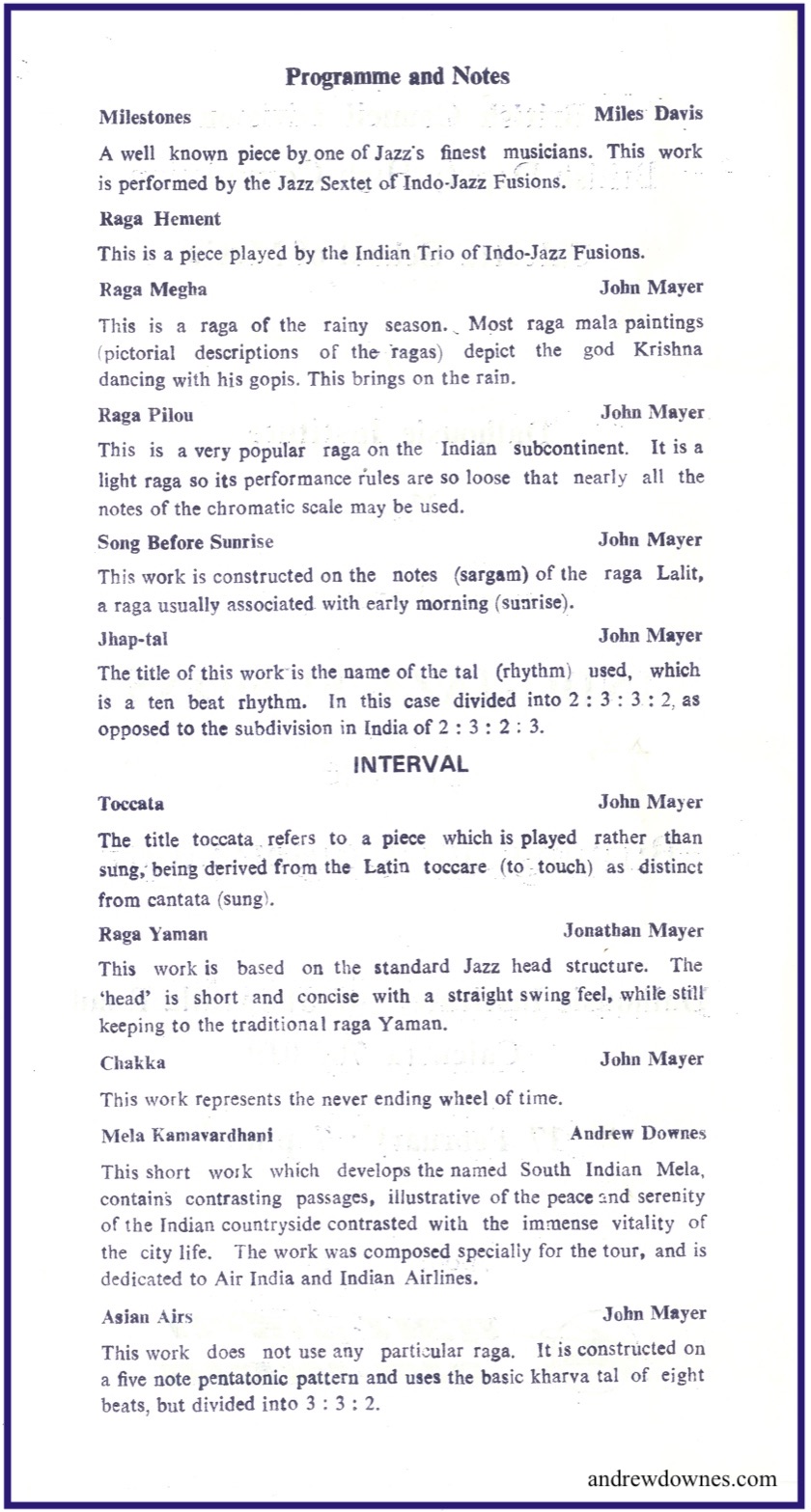 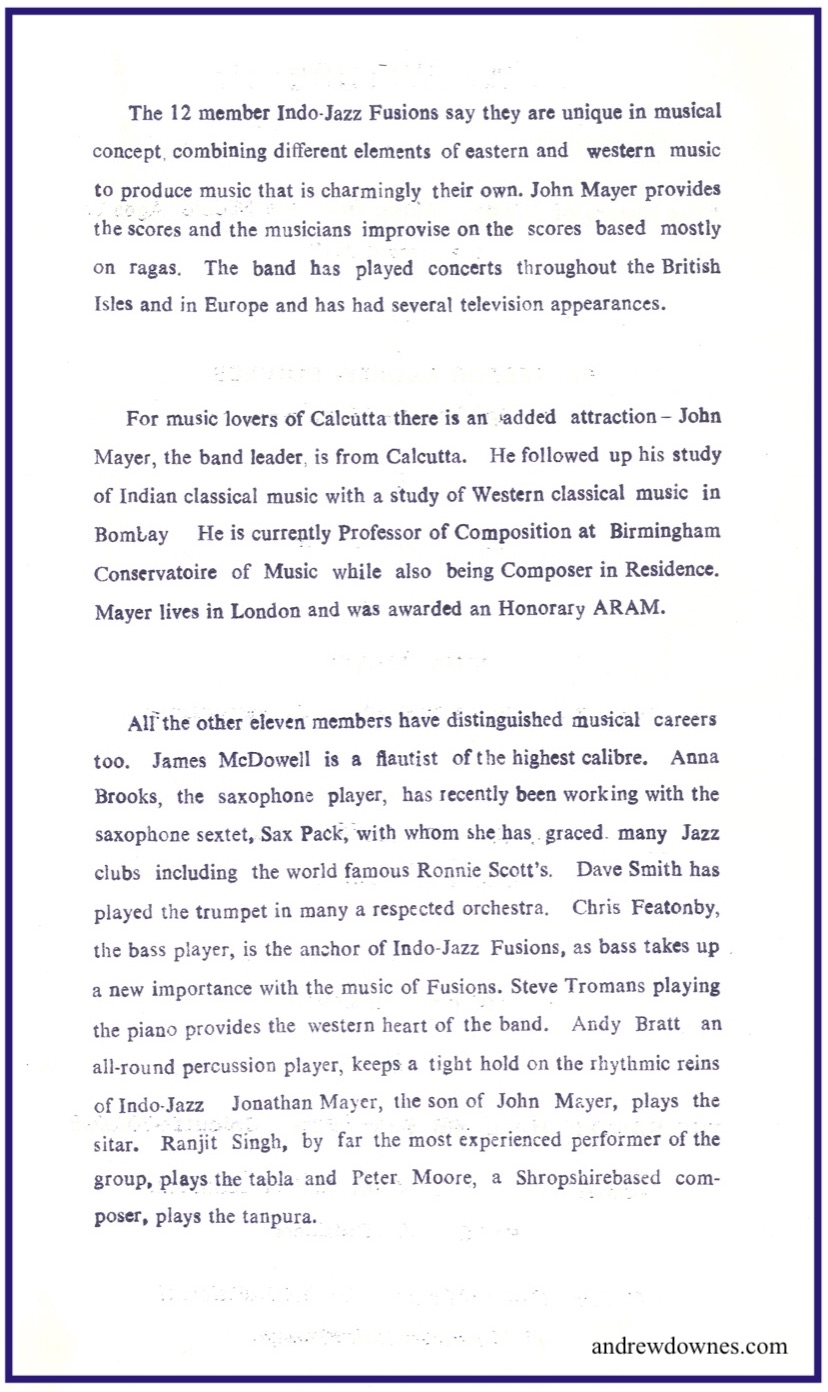 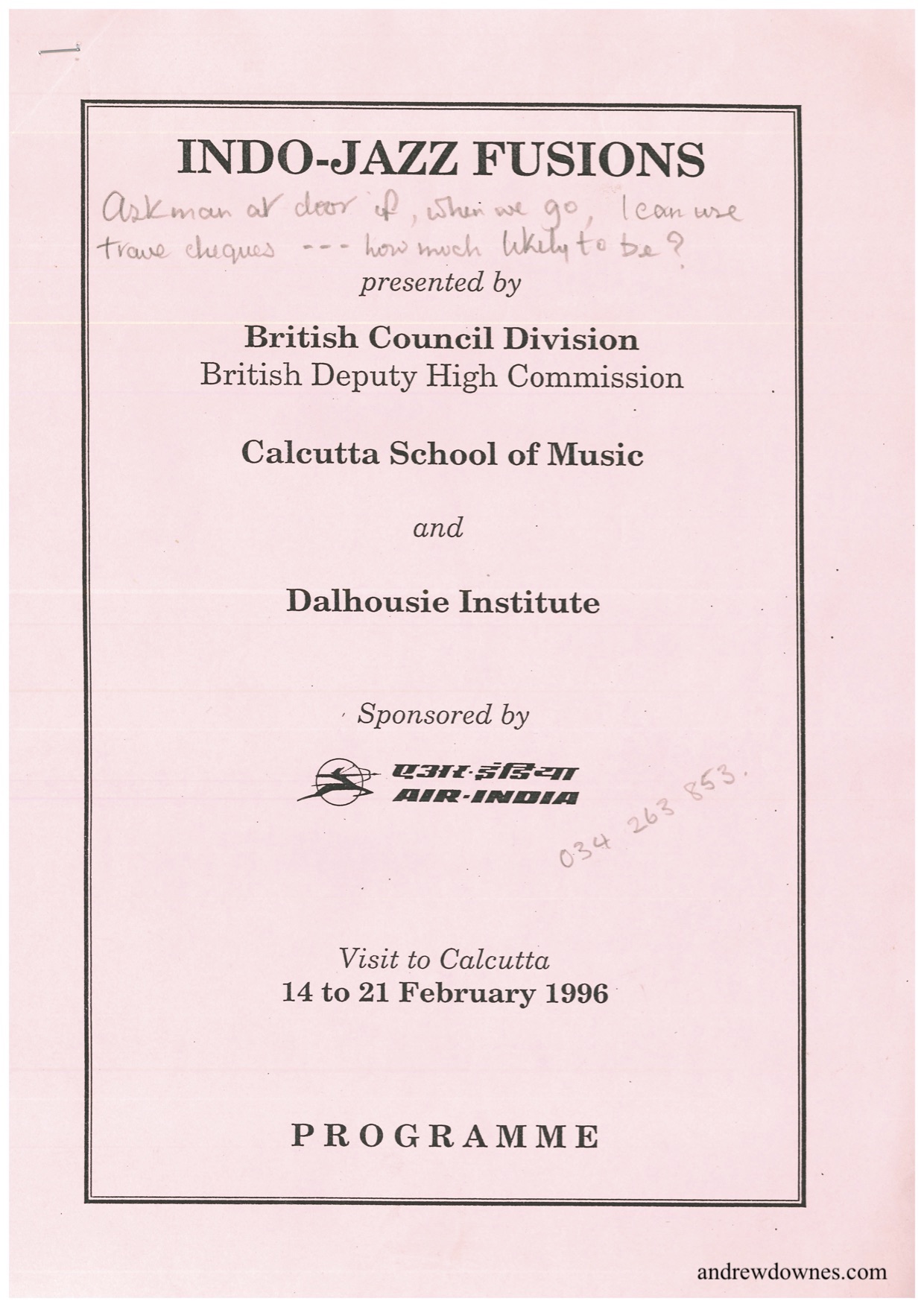 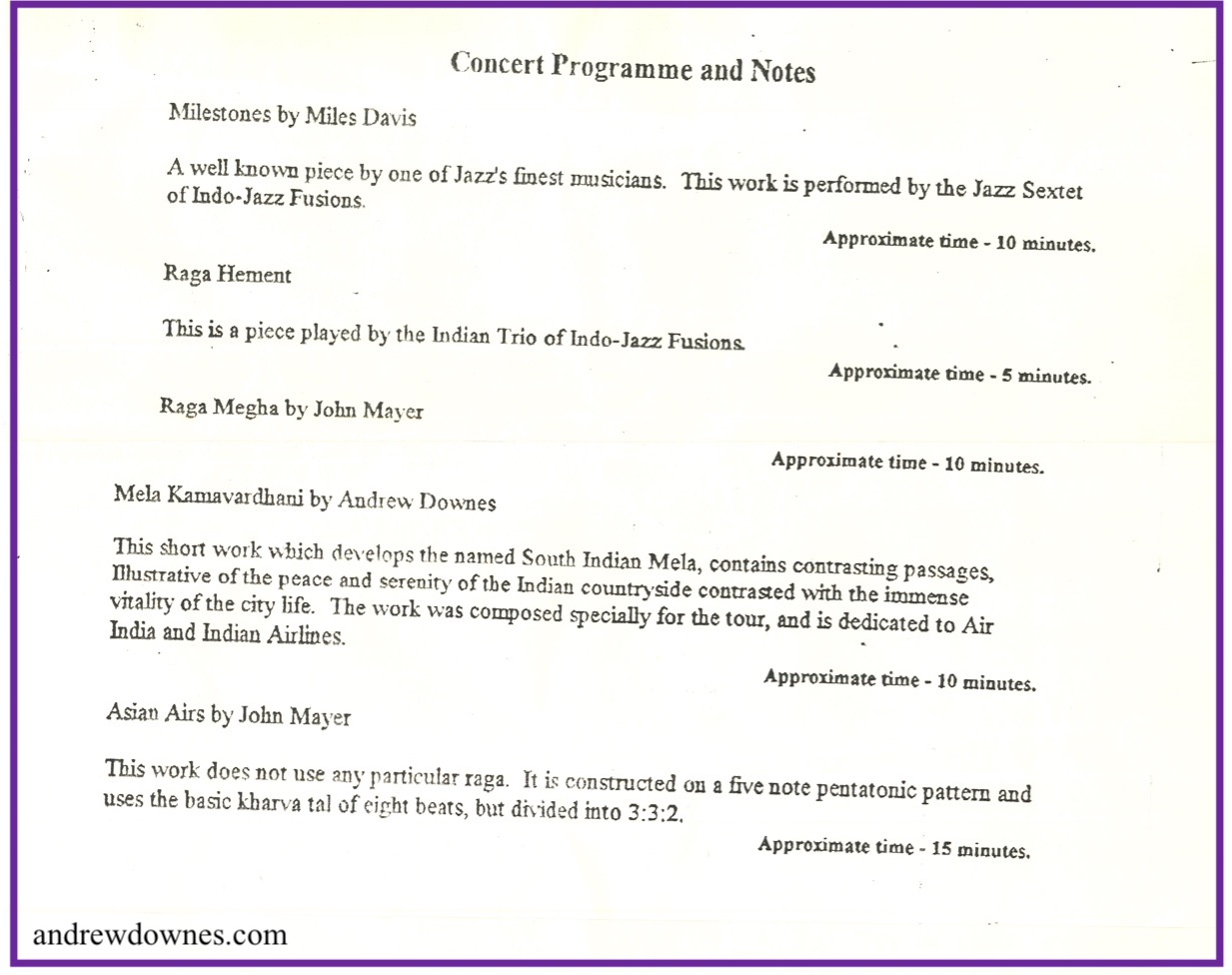 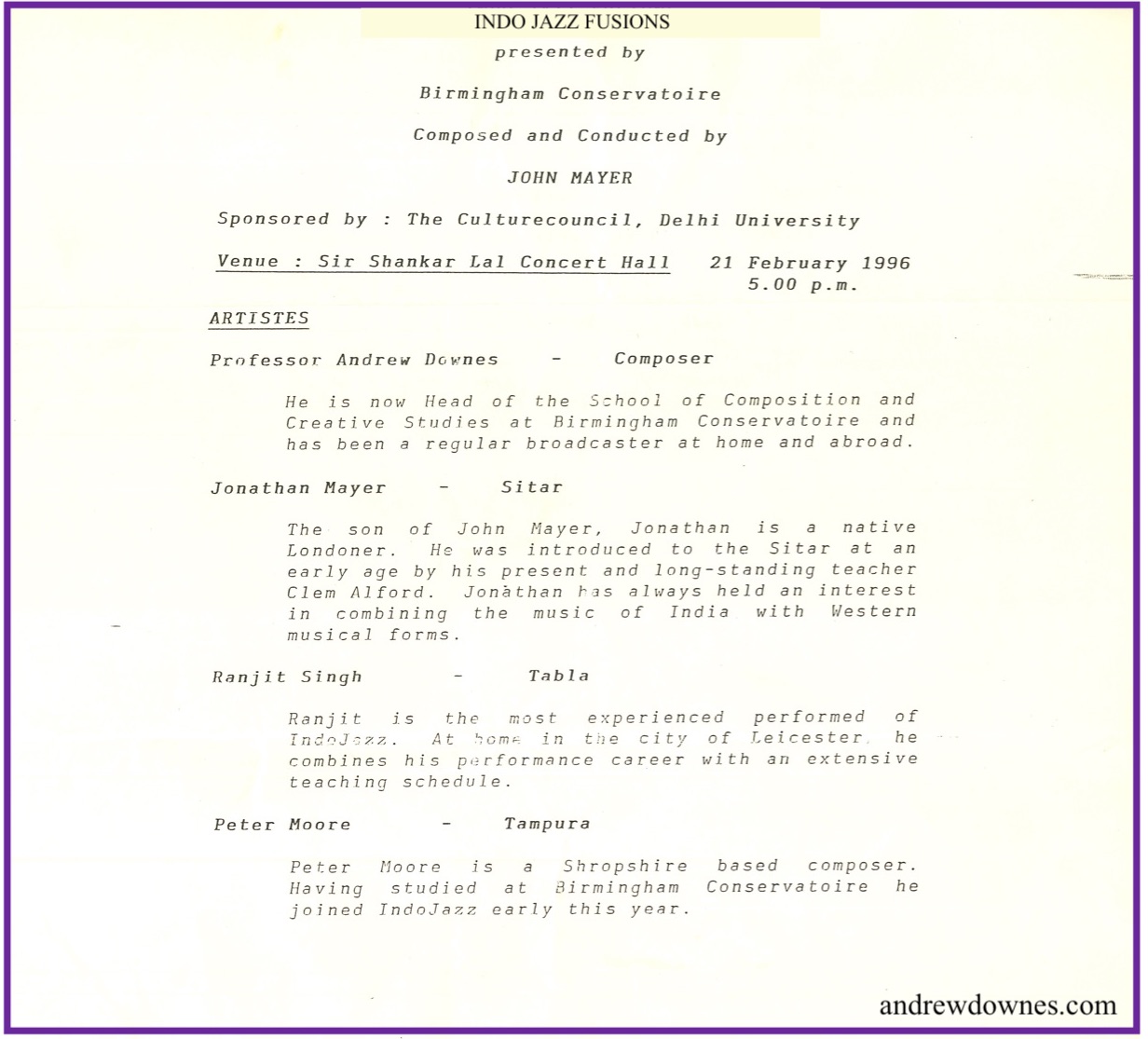 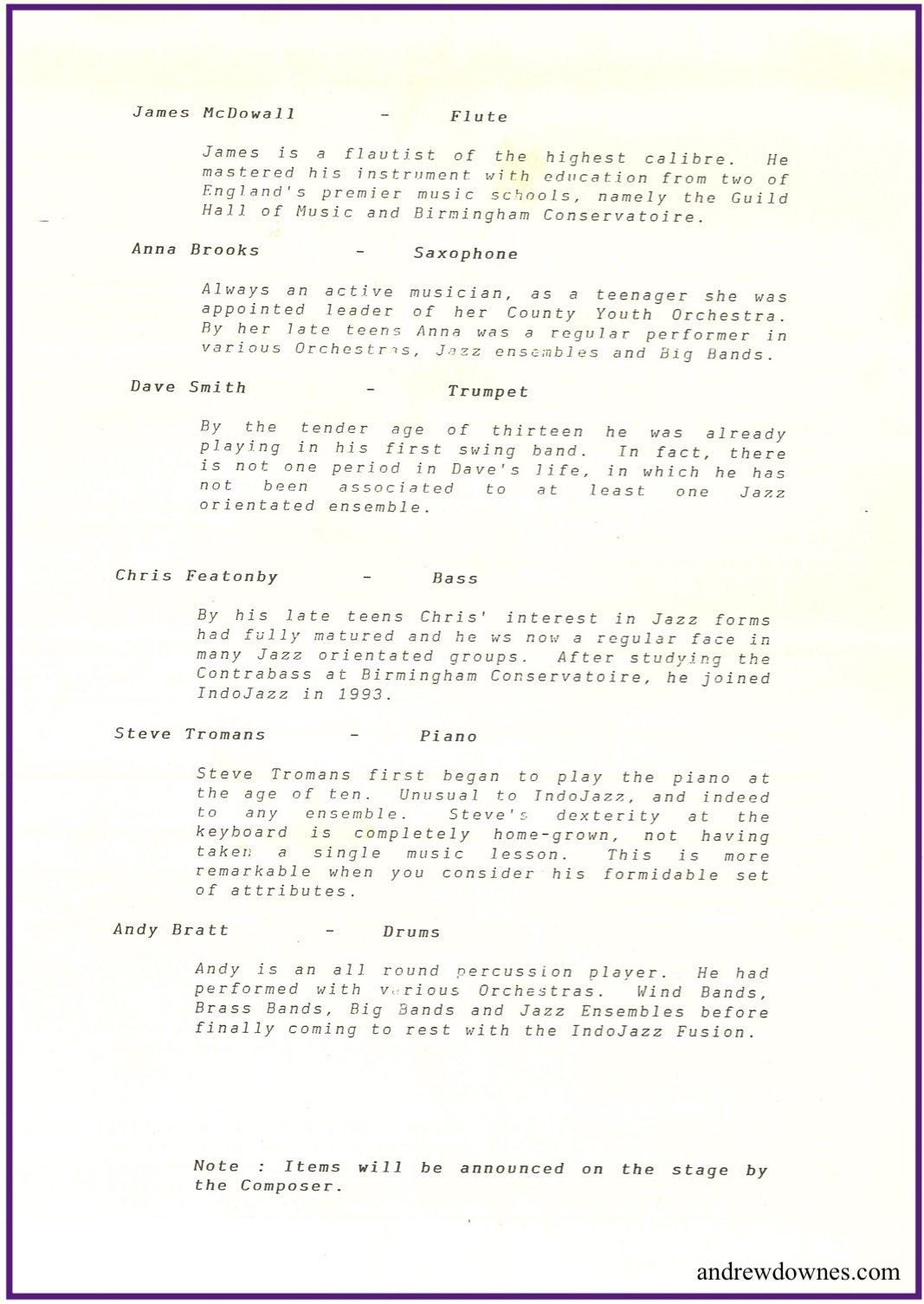 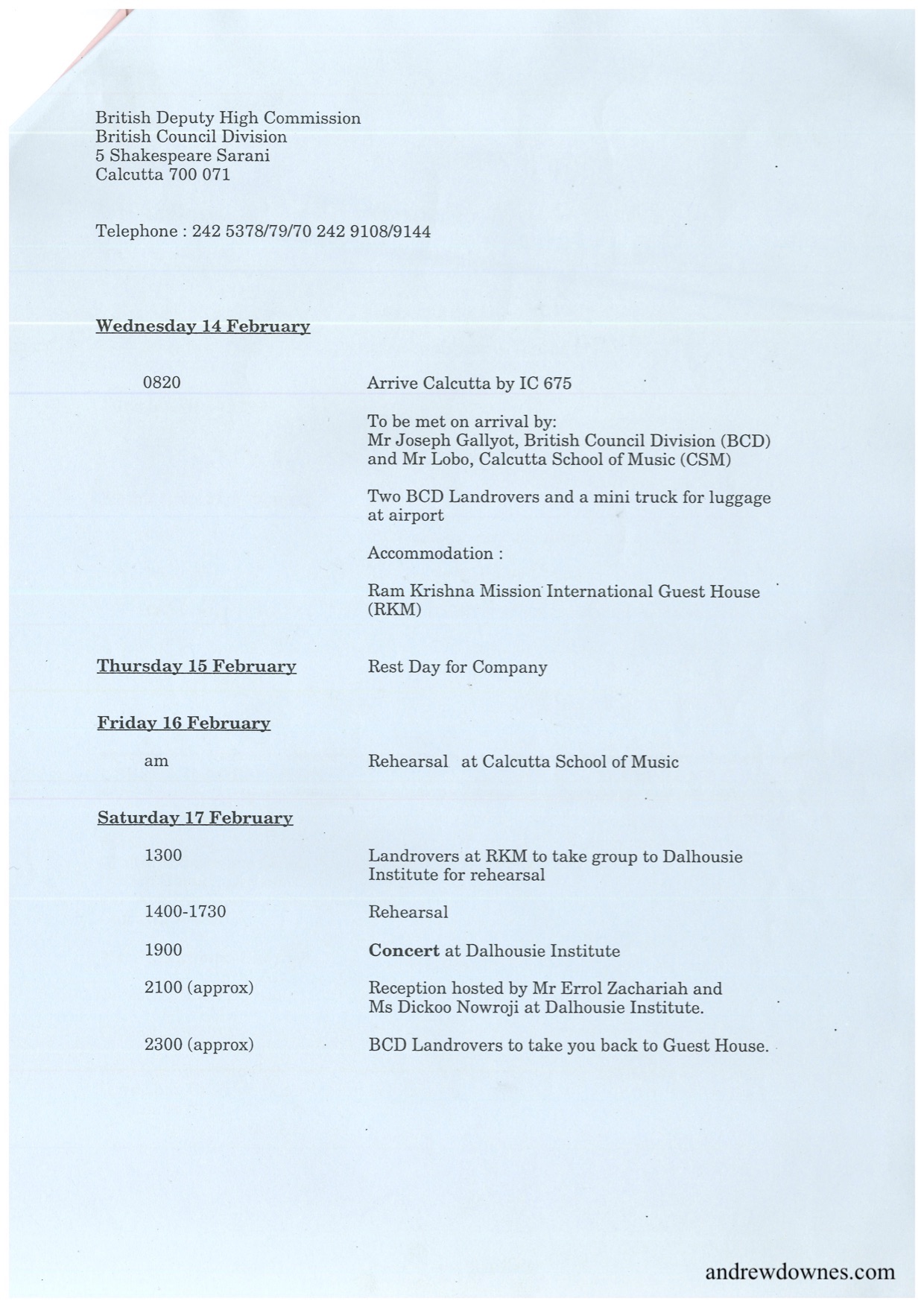 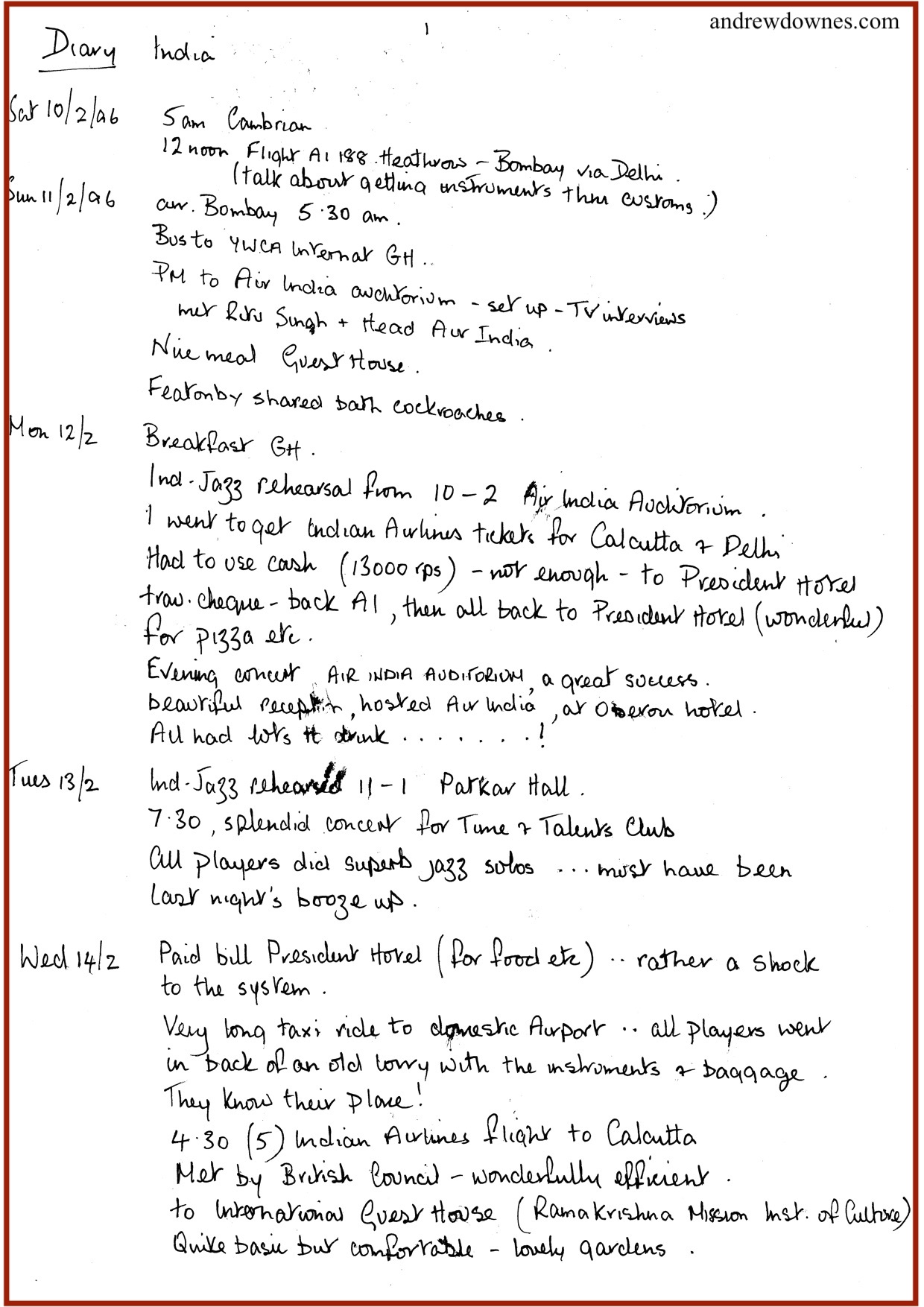 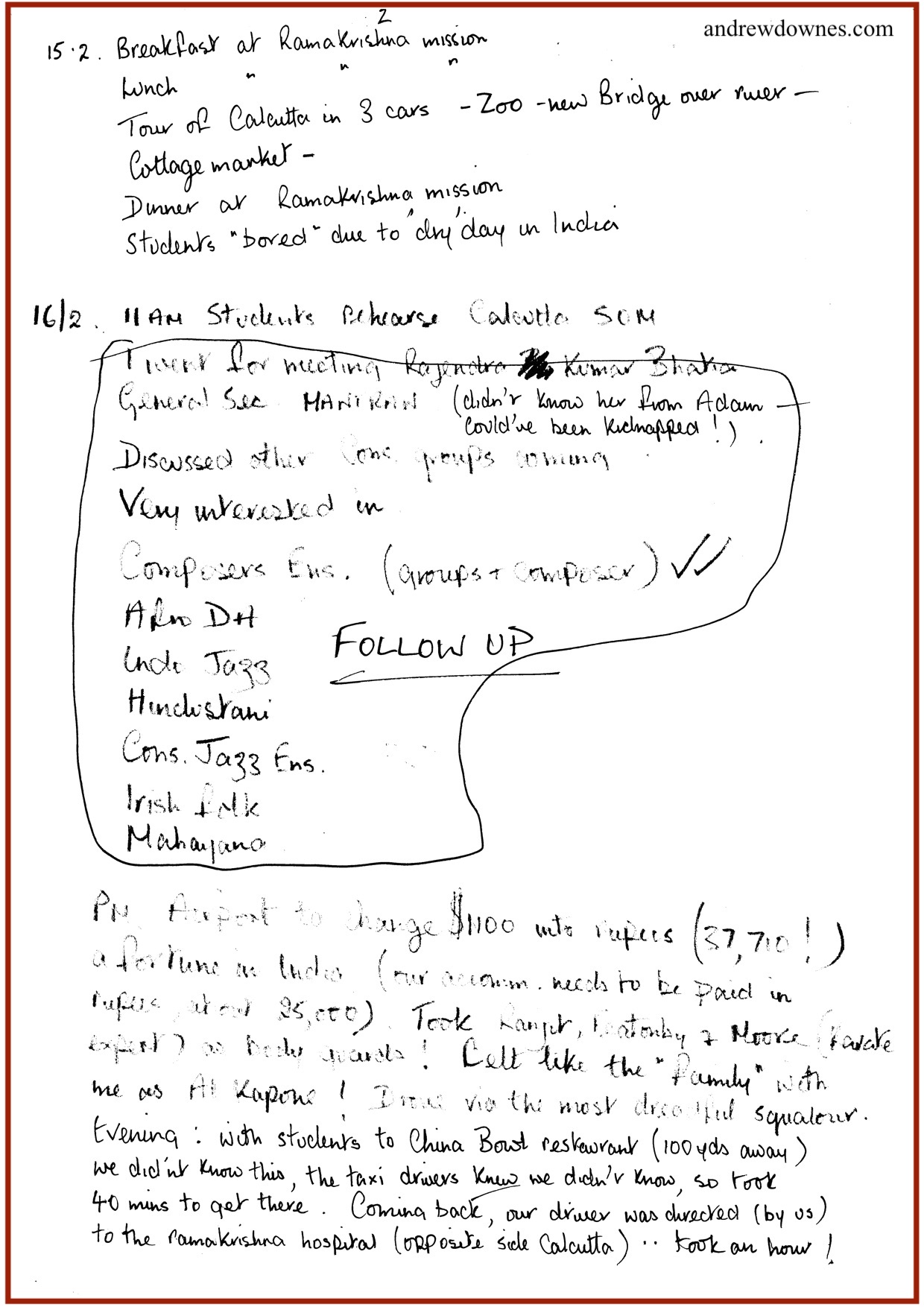 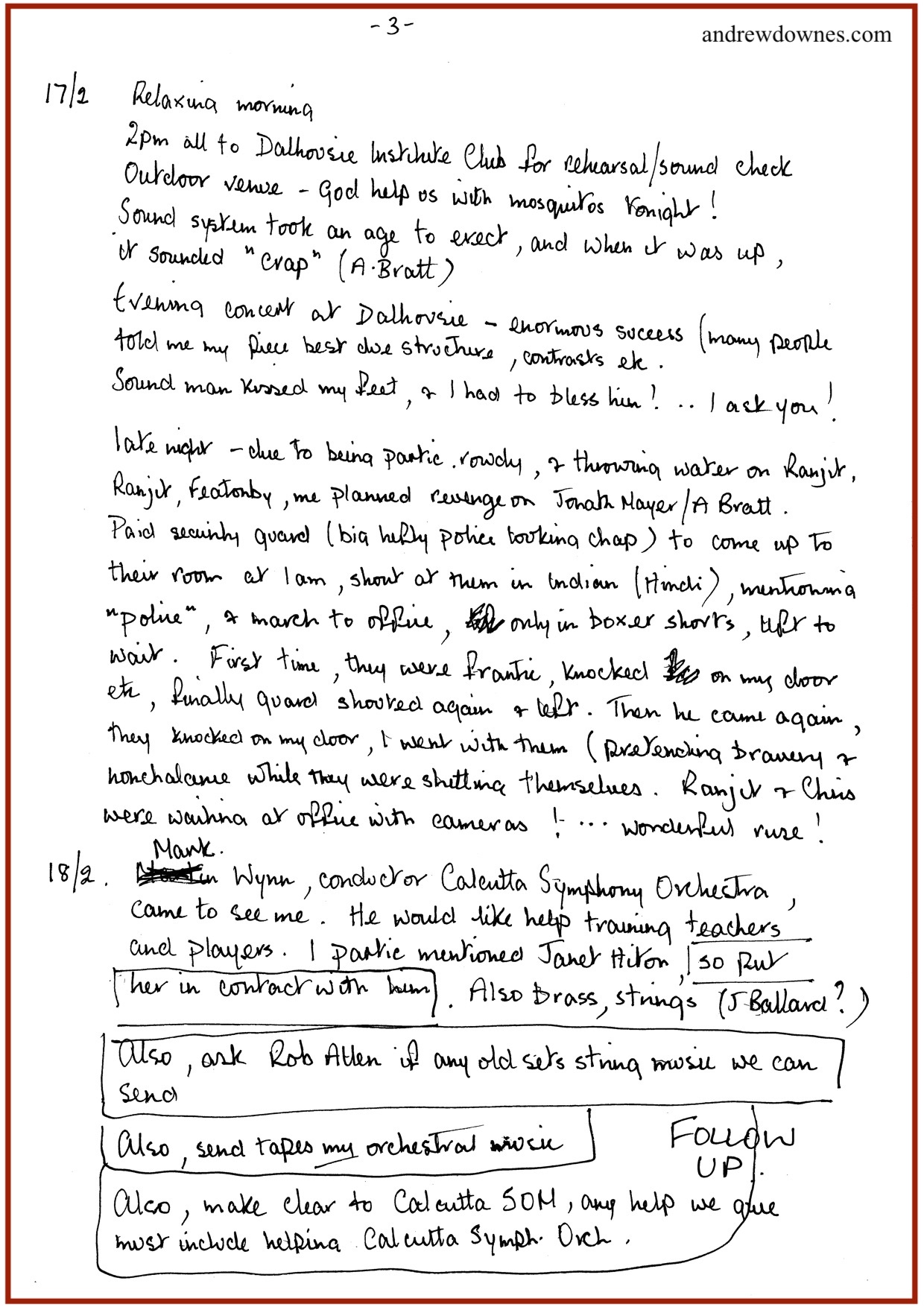 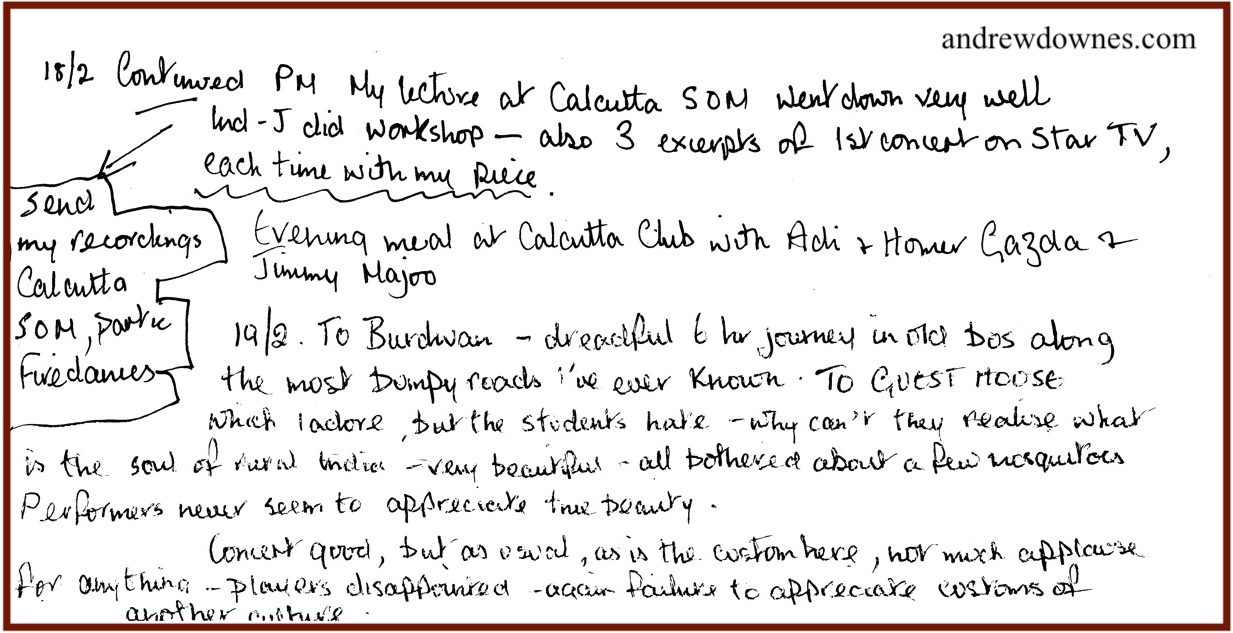 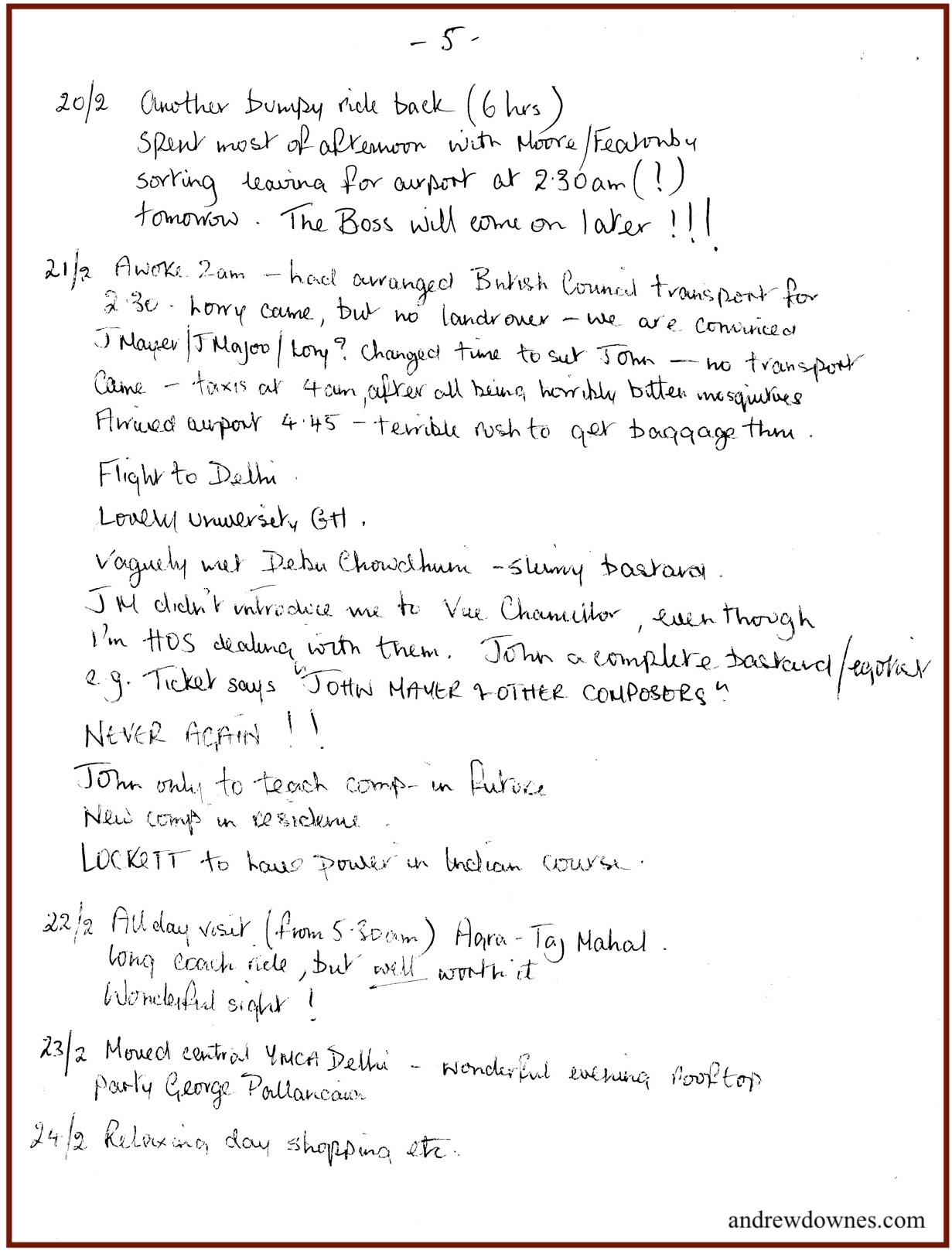