On 5th November 1993 Andrew Downes was invited by the Crane Concert Choir of the University of New York to conduct them in the first American performance of his A St Luke Passion. The choir has a tradition for inviting composers to conduct their works with them. Composers to be invited in the past have included Samuel Barber and Aaron Copland. He was asked to give a talk before the performance, about his work as Head of Composition and Creative Studies at Birmingham Conservatoire, and about A St Luke Passion, which can be read below. 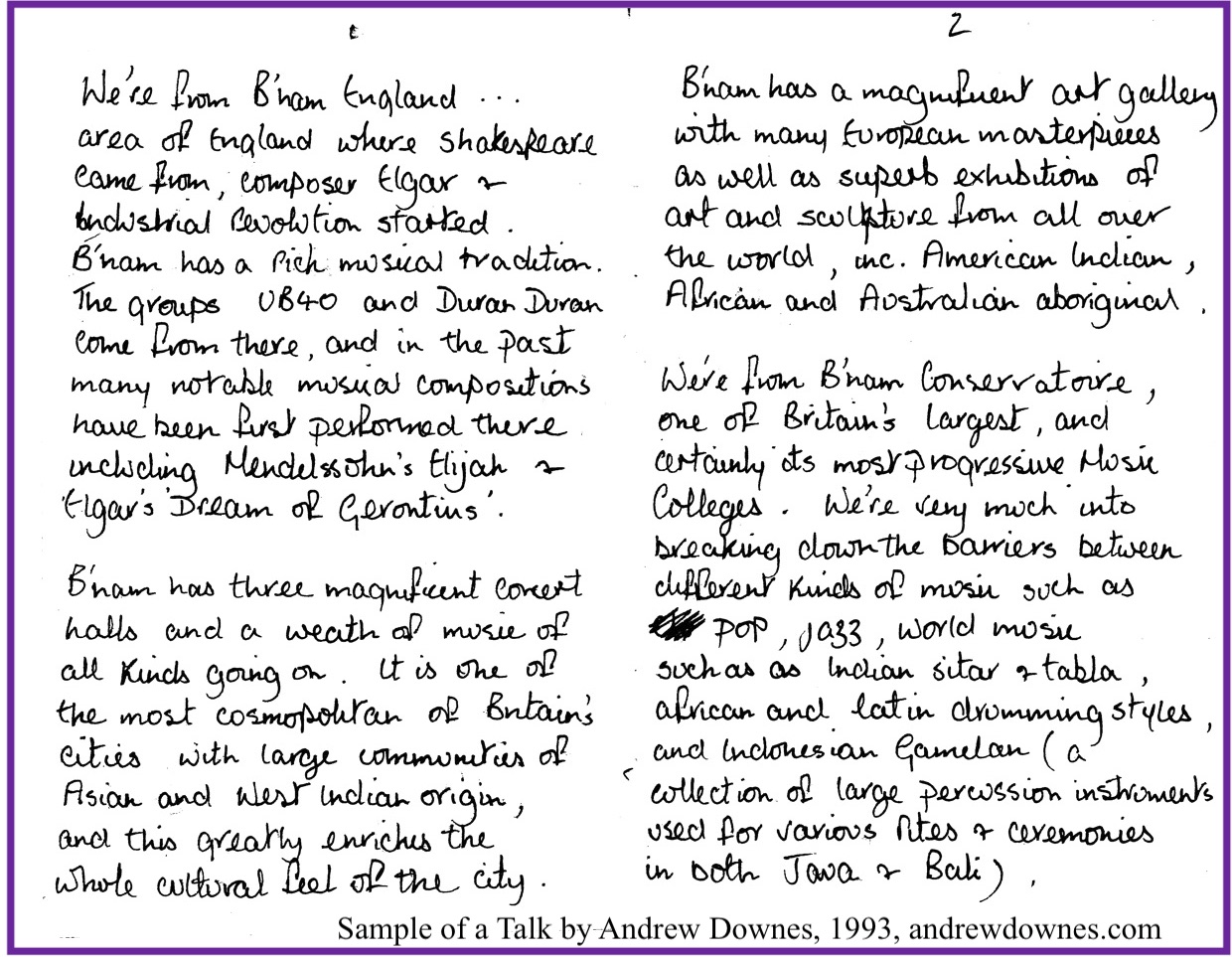 Andrew's Talk typed up:
We’re from Birmingham, England… area of England where Shakespeare came from, composer Elgar and Industrial Revolution started. Birmingham has a rich musical tradition. The groups UB40 and Duran Duran came from there, and in the past many notable musical compositions have been first performed there including Mendelssohn’s Elijah and Elgar’s Dream of Gerontius.

Birmingham has three magnificent concert halls and a wealth of music of all kinds going on. It is one of the most cosmopolitan of Britain’s cities with large communities of Asian and West Indian origin, and this greatly enriches the whole cultural feel of the city.

Birmingham has a magnificent art gallery with many European masterpieces as well as superb exhibitions of art and sculpture from all over the world, including American Indian, African and Australian Aboriginal.

We’re from Birmingham Conservatoire, one of Britain’s largest, and certainly its most progressive Music Colleges. We’re very much into breaking down the barriers between different kinds of music such as pop, jazz, world music such as Indian Sitar and Tabla, African and Latin drumming styles, and Indonesian Gamelan (a collection of large percussion instruments used for various rites and ceremonies in both Java and Bali).

As well as these very progressive elements we continue to offer traditional classical training, but students of this kind are encouraged to realise that their art is in no way superior to any others, and that in fact employment prospects in the future are likely to be far greater in pop, jazz and world styles. We try very hard to take away snobbiness of classical music, but as you can imagine this is very hard when many of our students come from relatively rich middle-class backgrounds, brought up traditionally to think that pop, jazz and world style are poor relations to classical.

One way we try to break down these barriers is to make all our first year students play or sing some Indian, African, Indonesian or European Folk music, and this hopefully gets them to realise that their classical music is only one small cog in a large wheel of world music.

About 40 of our students major in musical composition. They’re in a perfect environment for such study because they have players of all kinds to work with and learn from. Our composers write in styles ranging from pop through to avant-garde classical, and there are regular public concerts of their music. We have a two week festival coming up in which new student compositions feature strongly.

A St Luke Passion
I was asked to compose this piece by the Civic Choir of Wolverhampton, a large industrial city near Birmingham. I was paid to compose it by the Wolverhampton Town Council, and according to the local newspaper to was the first time any such commission had taken place in Wolverhampton (probably the last once they heard it!).

When you come to hear the piece tomorrow night, you’ll get a text of the words. They were selected by my wife Cynthia from the New English Bible version of the St Luke Gospel, and she also wrote a programme note which I’ll now read to you, because she describes the feeling of the piece in words far better than I can:

Programme Note:
A St Luke Passion is in two parts. Part one begins with the Last Supper. The music is very tender and yet has an underlying feel of foreboding, bringing out the emotion which Christ must have surely felt when he saw his death approaching and also knew the destiny of man. His feelings are expressed throughout the work in the very heart-rending orchestral accompaniments. The baritone soloist takes the role of Christ, while the choir narrates the storyline and also acts the part of the crowds, the disciples, and other parts. They also have three unaccompanied chorales in which they comment on the events, singing in Latin; firstly when Judas betrays Christ they sing a setting of the words from the Tenebrae Responses, "Judas mercatur pessimus" (The wicked merchant Judas sought out the Lord with a kiss); secondly when Christ dies on the cross a setting of "Tenebrae factae sunt" (There was a darkness when the Jews crucified Jesus); and at the end of the whole work they sing a jubilant "Credo in unum Deum". The orchestra also has its role. It conveys all the emotions which this story contains and which cannot be expressed in words, heightening our awareness of them. A sublime example is when Jesus addresses the women in the crowd on his way to his crucifixion in the aria "Daughters of Jerusalem". It is their fate rather than his own which breaks his heart. A meandering passage on a solo violin, echoed by the piano duet, conveys the intense sadness, while low ostinato passages on  the low strings suggest a menacing fear of the future.    Part one is bought to a close with the death of Christ and the choir's choral "Tenabrae factae sunt". Part two begins with dawn breaking on Sunday morning. From the first bars in the orchestra the mood has changed. There is hope, wonderment and serenity in the music. Mary Magdelene and Mary the Mother of James find the tomb empty and are told by the angels of the resurrection of Christ. Then Christ himself converses with two disciples on the road to Emmaus, and they invite him to supper. The music of the opening of the work (the Last Supper) returns as Jesus breaks bread at their table, and they suddenly recognise him. The music bubbles with joy as they return to Jerusalem to tell their friends, and they find Jesus again standing among them. A very beautiful aria full of hope and comfort follows: "Everything written about me was bound to be fulfilled". The work builds up to its climax here. The emotional atmosphere is highly charged as Christ parts from them. They they go away with great joy to the temple and praise God. The choir end the work with a majestic setting of "Credo in unum Deum" (I believe in God). Full of exuberance, the "Credo" sums up the beliefs of the followers of Christ ever since that day: that Christ came to the world to save sinners, he rose to heaven and sits at the right hand of God.

To those using these notes - These notes have been provided by the Composer. You are more than welcome to use these notes in your programme, but please do not truncate or amend. If you do, please would you advise me by email - and would you also ensure that I am correctly credited as the author, by printing the full signature shown at the end of the programme note. Thank you.

Andrew's Talk continued:
Although by its subject it may sound as if this is a sombre and severe piece of music, I hope that in fact it is nothing of the kind. I have no specific religious beliefs as such, but I do think that Jesus was a wonderful man with a uniquely warm and caring attitude towards humanity, and I hope that this warmth and daringness, and a sense of great hope for the world comes through in the music.

The style of the music is primarily melodic… I hope it has the kind of tunes that you can remember afterwards. The set up is basically classical with a choir, piano duet, percussion and strings… the reason for this traditional orchestration is that it was written to be performed with a work called St Nicolas by a British composer called Benjamin Britten, and they didn’t want to pay extra players. Usually I write for a very broad range of instruments including drum kit, African and Latin percussion and folk instruments, but in this piece I hope the stylistic fusion of all these things comes through despite the more conservative orchestration.

The music is indeed a fusion of all sorts of sounds which I like. There are sections, and the orchestra finds this difficult, where everyone plays in different times… this hopefully creates a kind of multi dimensional out of time effect for the most psychologically disturbing parts of the text such as when Jesus is nailed to the cross… you should hear the actual sound of an anvil as the nails are driven home!

This multi dimensional effect is in fact straight out of African tribal music where each player has a regular pattern, but in a different time from everyone else.

There are also elements of jazz and rock music in this piece, with the free flowing rhythm of jazz (which classical musicians find so hard) and melodic fragments very reminiscent of rock music. Example, when Jesus has returned from death and tells the disciples to spread the news (p128 W) and when they return to the city with great joy. (p133 cello, 134 piano etc).