Notes for Indian Music Congress Talk given with John Mayer, 1994 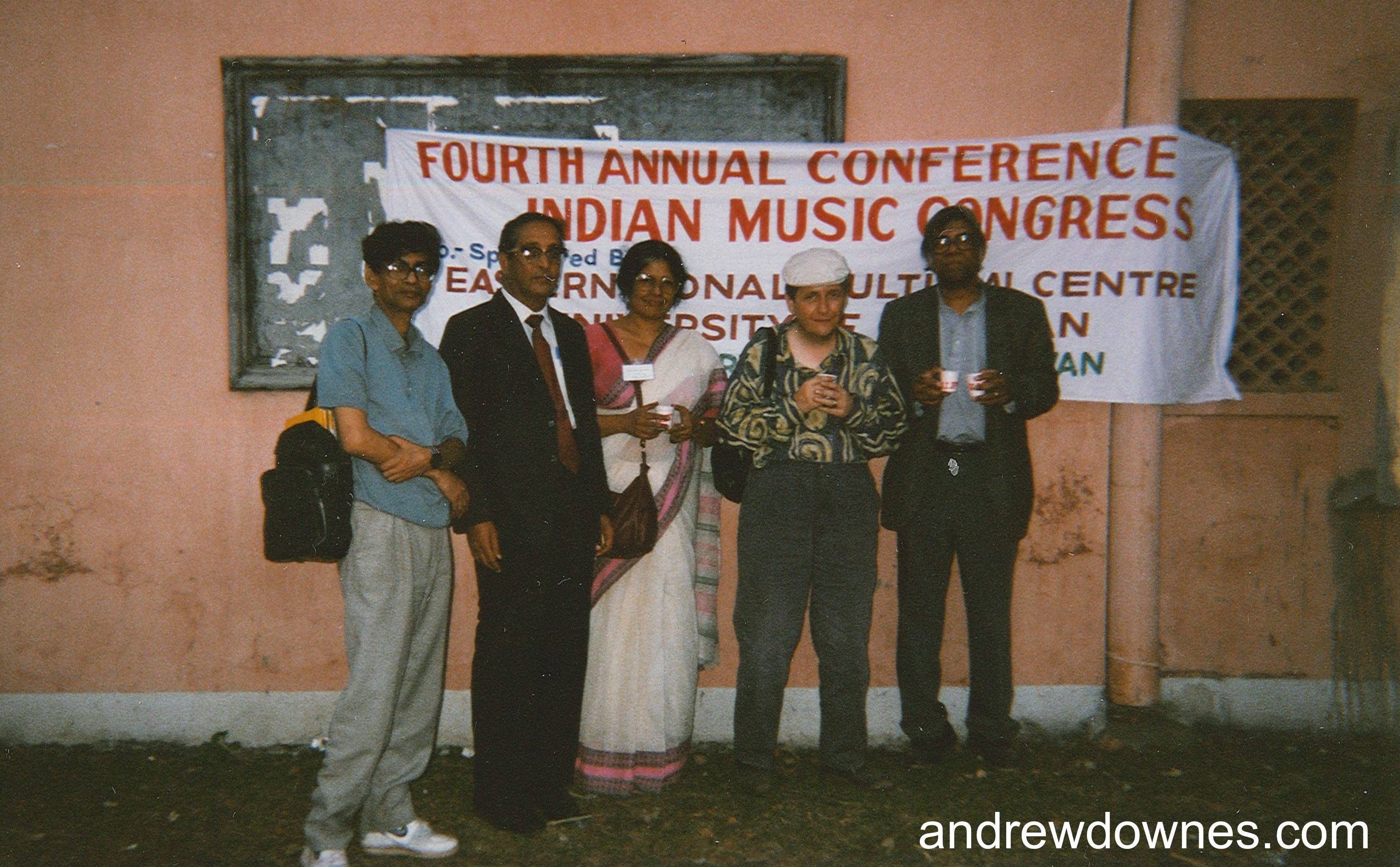 John and I have come to India to seek out the advice of experts such as Jayshri Banerjee, so that as we develop our Bachelor of Music course in Indian Music at Birmingham Conservatoire, we get everything absolutely right, and that all the practice, theory and philosophy involved in the course is absolutely correct in all details. We feel that in order to properly understand each other’s cultures, the perceptions of those different cultures must be filled with truth and enlightenment.

Therefore, with all humility, I’d like to point out one or two features of this morning’s excellent seminar which were in fact incorrect. These particular features were concerned with European Gregorian Chant. I’ve in fact sung a great deal of Gregorian Chant, and I studied the structures of Gregorian Chant as part of my Masters degree at the University of Cambridge.

You may notice the melodic similarity with the Raga Kafi, or our Dorian mode.

It was also said that Gregorian Chant was sung in 4 part harmony. This is not the case… for hundreds of years from the 4thCentury it was sung on a single line only, and then from around 1000AD a second part was sometimes added, a perfect 4thor 5thapart, following exactly the same melodic line.

From the 12thCentury to the 15thCenturies composers such as Ockeghem, and Machaut experimented with using sections of plainsong for counterpoint, and the cantus-firmus, the plainsong sung by the tenor in long notes with much more decorative outer parts became popular in the Church.

Criticism can be horribly destructive of creativity. A boy came to see me, asking how get into Cambridge University … As I’d been there, I was able to advise him.

He was a most superbly gifted composer with a great future.

He got into Cambridge … when he got there he took his compositions to the professor, a British Composer Alexander Goehr. After a brief look at the pieces the good professor told the boy to give up as he had no talent or future.

At that tender age a composer is too sensitive to realise that even very distinguished people talk rubbish most of the time and that their own point of view is of at least equal validity.

Corrupt critics … I once knew one who was guaranteed to give a good review if you bought him 3 double whiskeys beforehand.

In the West we pay our critics an annual salary … they are on contract with a newspaper. What is the function of a music critic … my own feeling is that music speaks in an individual way to the heart and intellect of each person, and that one doesn’t need the intercession of a music critic to help form opinions.

In some people’s experience, music critics are rarely more than ordinary performers or composers of music, and a number of them are extremely bad teachers. Their command of the English language is usually very limited, but they couch their phraseology in such pompous and snobby ways that most of their readers get too bored to realise their limitations.

1)  It is a great hour and privilege to be here at the fourth annual Indian Music Congress, and I thank the University of Burdwan for inviting us and providing us with such excellent hospitality. Burdwan is certainly a most beautiful place.

2)  At Birmingham Conservatoire, we’re the only music college in Europe with a fully fledged academy of Indian music, our Sangeet Academy. As we develop our students of sitar and tabla to Bachelor of Music degree level, we very much want to gain advice and guidance of Burdwan. Indeed we are inviting Jayshri Banerjee to Birmingham next Autumn to oversee the beginning of these developments.

I do agree about the dreadful treatment of India by the British, but they were a certain class of British, the upper class, and furthermore the younger sons of the upper class, who usually were very unintelligent and arrogant. If you come to Britain you’ll find that most people are almost as nice as most people in India. 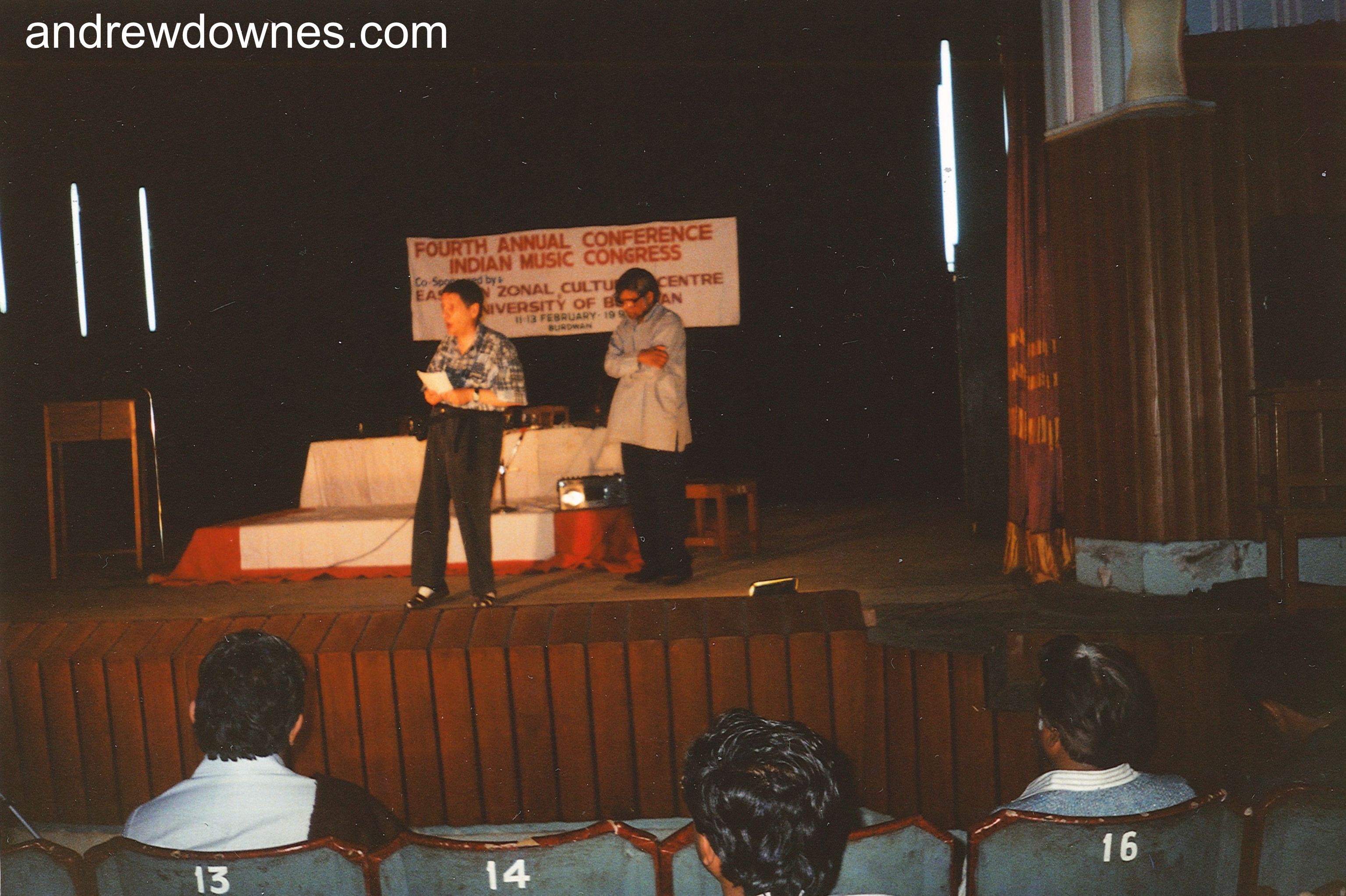 Return to Andrew's Diary of a Trip to India