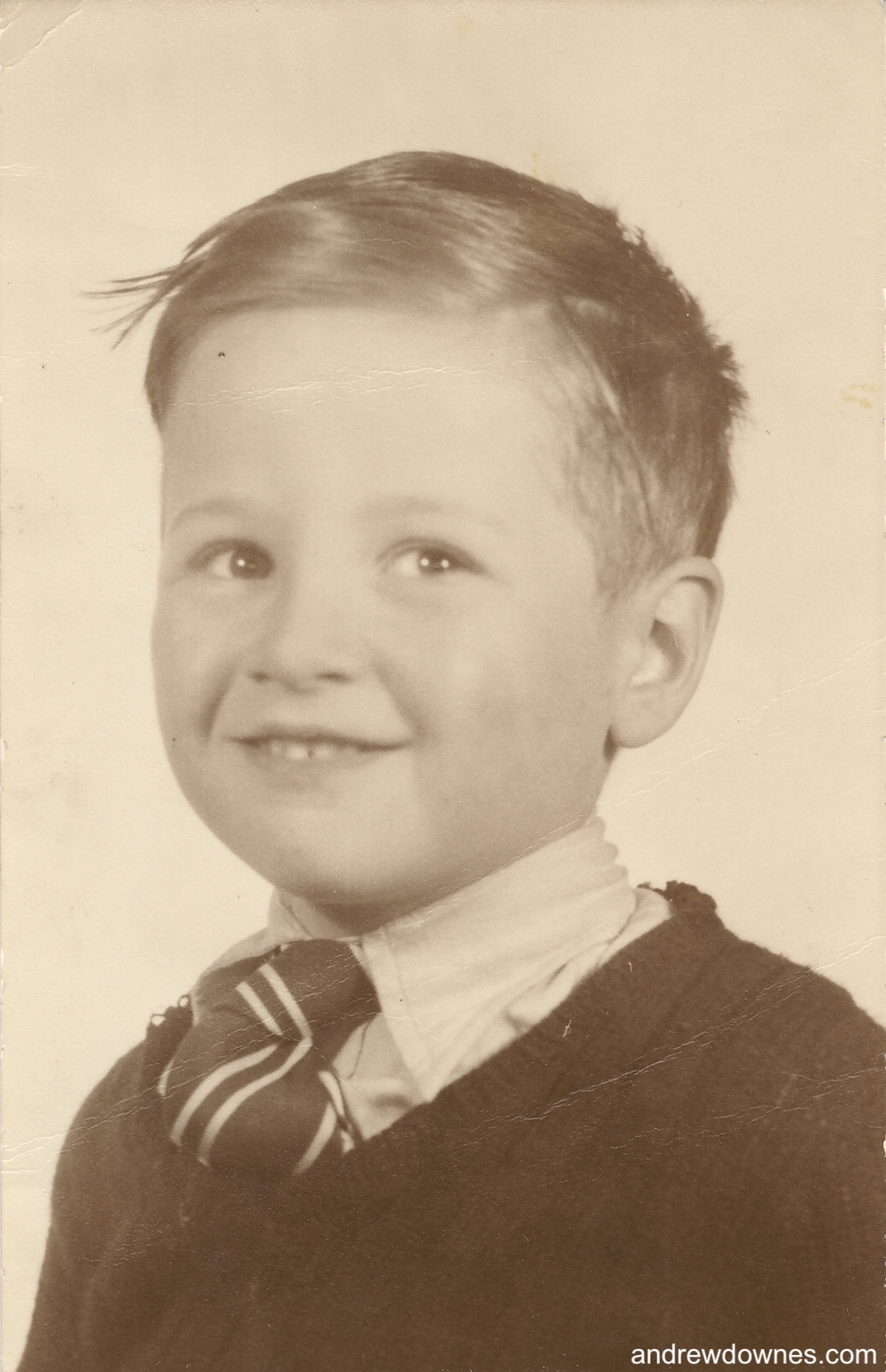 Andrew Downes in his Primary School uniform in the 1950s

An account by his wife and publisher, Cynthia Downes, posted on February 25th, 2019

Andrew was born in Handsworth, Birmingham, in 1950. The population of Birmingham was not cosmopolitan as it is now. Andrew's Uncle Ray had a black friend, however, whom Andrew got to know very well and liked very much. Thus began Andrew's love of other races and cultures.

Toddler Andrew also became friendly with the local policeman, who was the archetypal Mr Plod, very jovial. One day little Andrew called him "Big bottom"! Mr Plod roared with laughter and so Andrew called him that name ever afterwards. 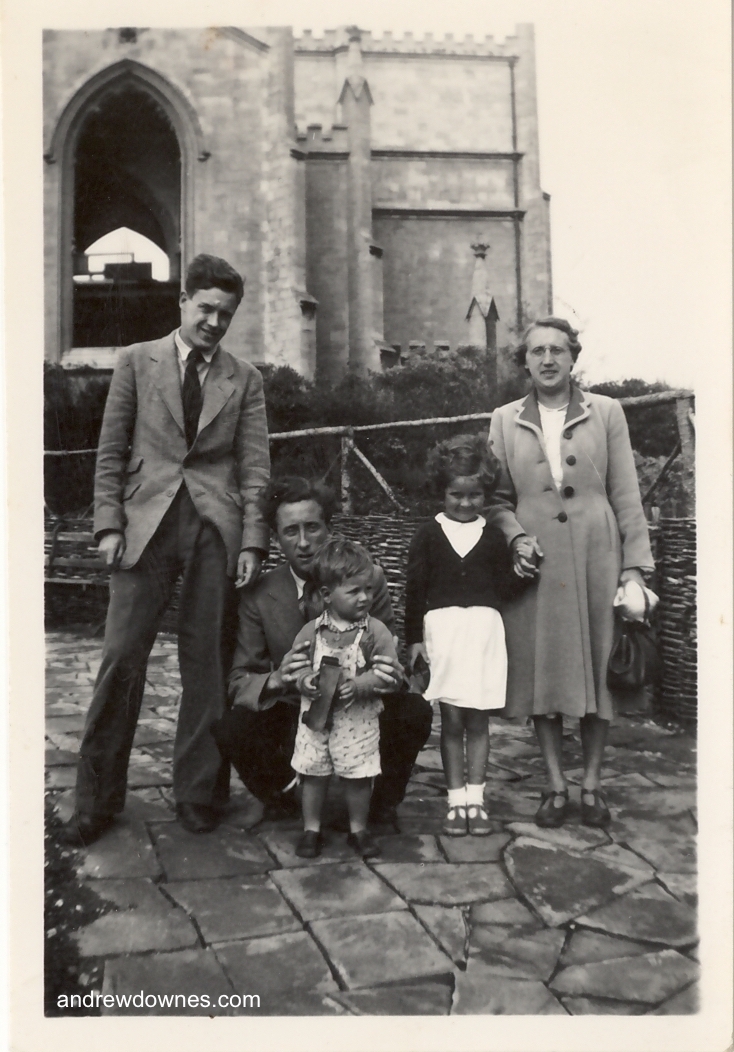 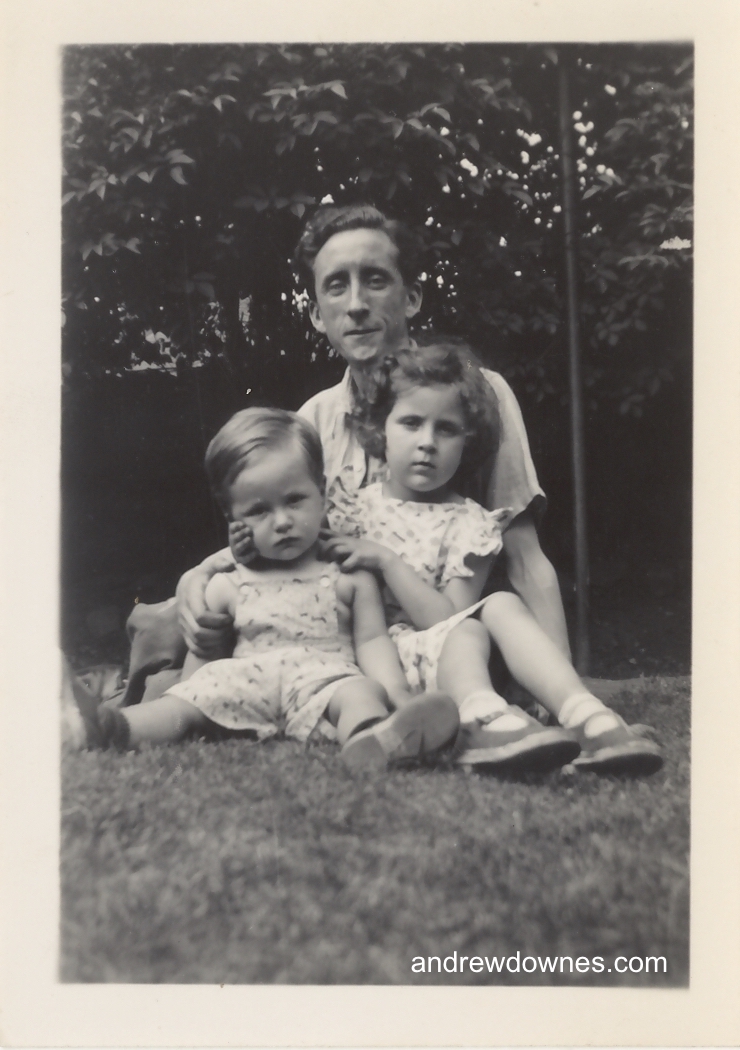 BELOW: Andrew on Exmouth beach where his family often went for holidays 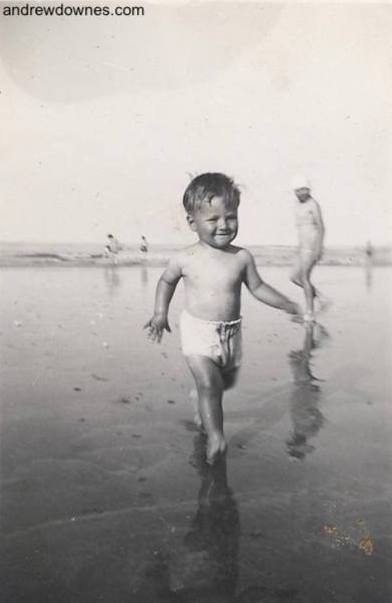 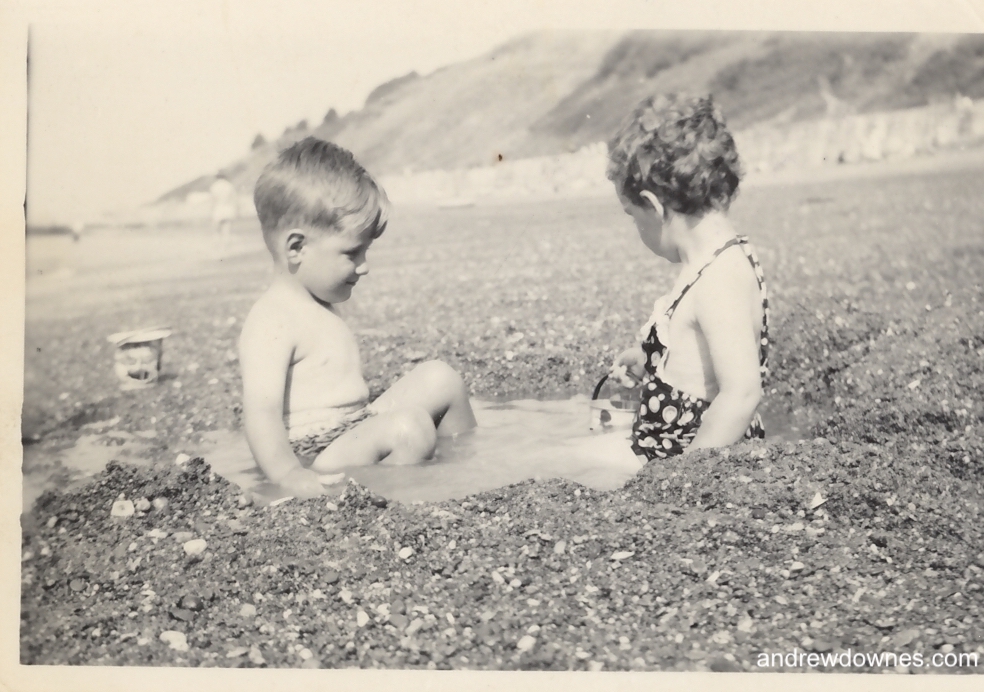 Andrew's Mum, Iris, was a very quiet lady, who nonetheless loved her children. A very out of character episode happened when Andrew was a tiny baby. Iris parked Andrew's pram outside the grocer's shop one day, and obviously hadn't got used to the new routine, or maybe was distracted by her older child, Judith.  She got back to their nearby home and realised Andrew was still outside the shop! 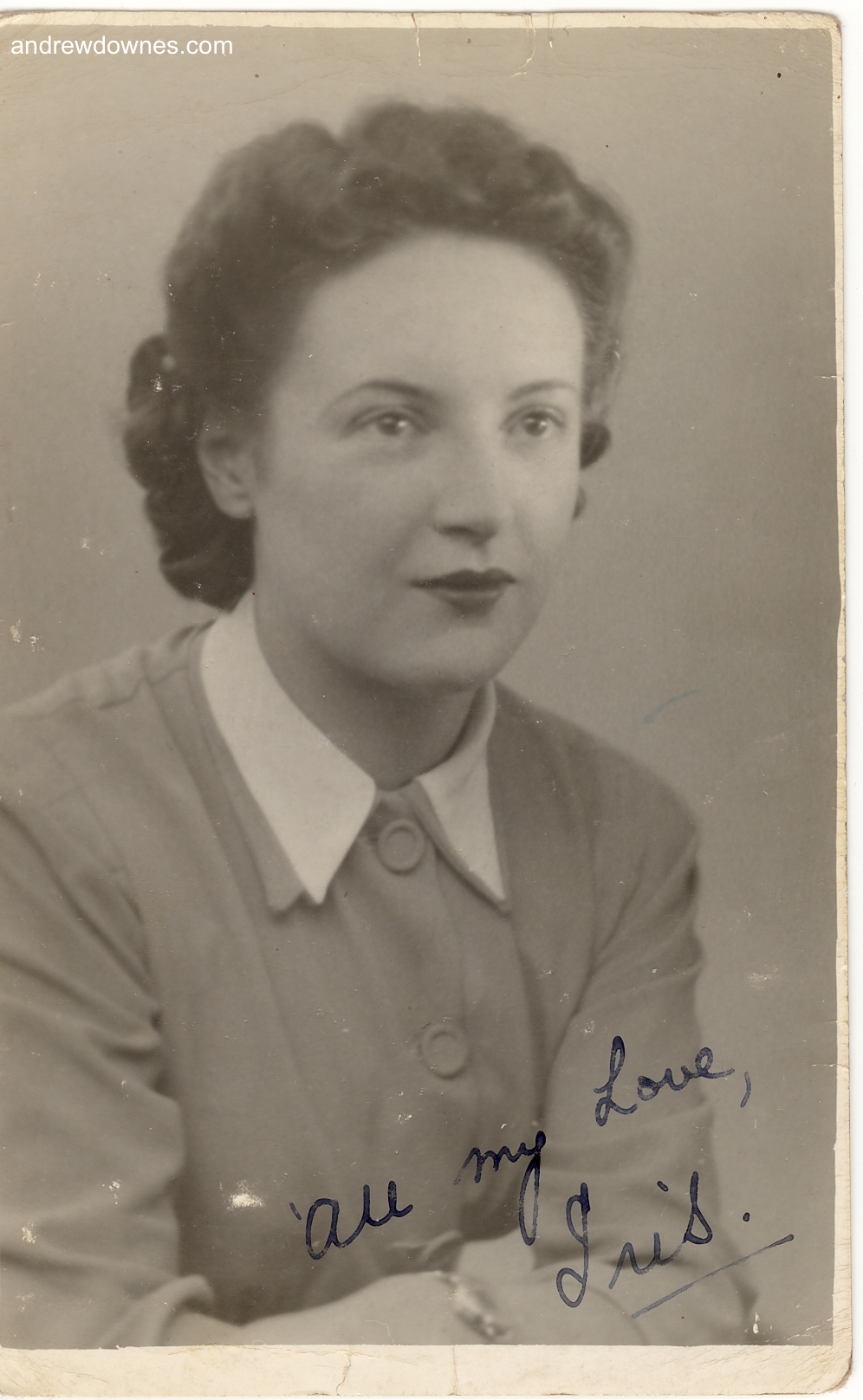 Frank, Andrew's Dad, played in the CBSO in the early 50s and bought a TV for Iris for the evenings when he had to be out. Andrew remembers watching the Coronation on this little black and white set, with a group of neighbours who didn't have TVs.  At one point the Queen disappeared behind a curtain. When she reappeared, Andrew remembers his Grandma saying: "Oh, she's still there then!"

Frank also bought various cars as Andrew was growing up. One was a Morris Minor with a leaky canvas roof. The family always took Grandma on holiday with them.  To stop the 2 kids from fighting Grandma always sat in the middle of the back seat between them and wore a transparent plastic rain hood to protect her from the drips. 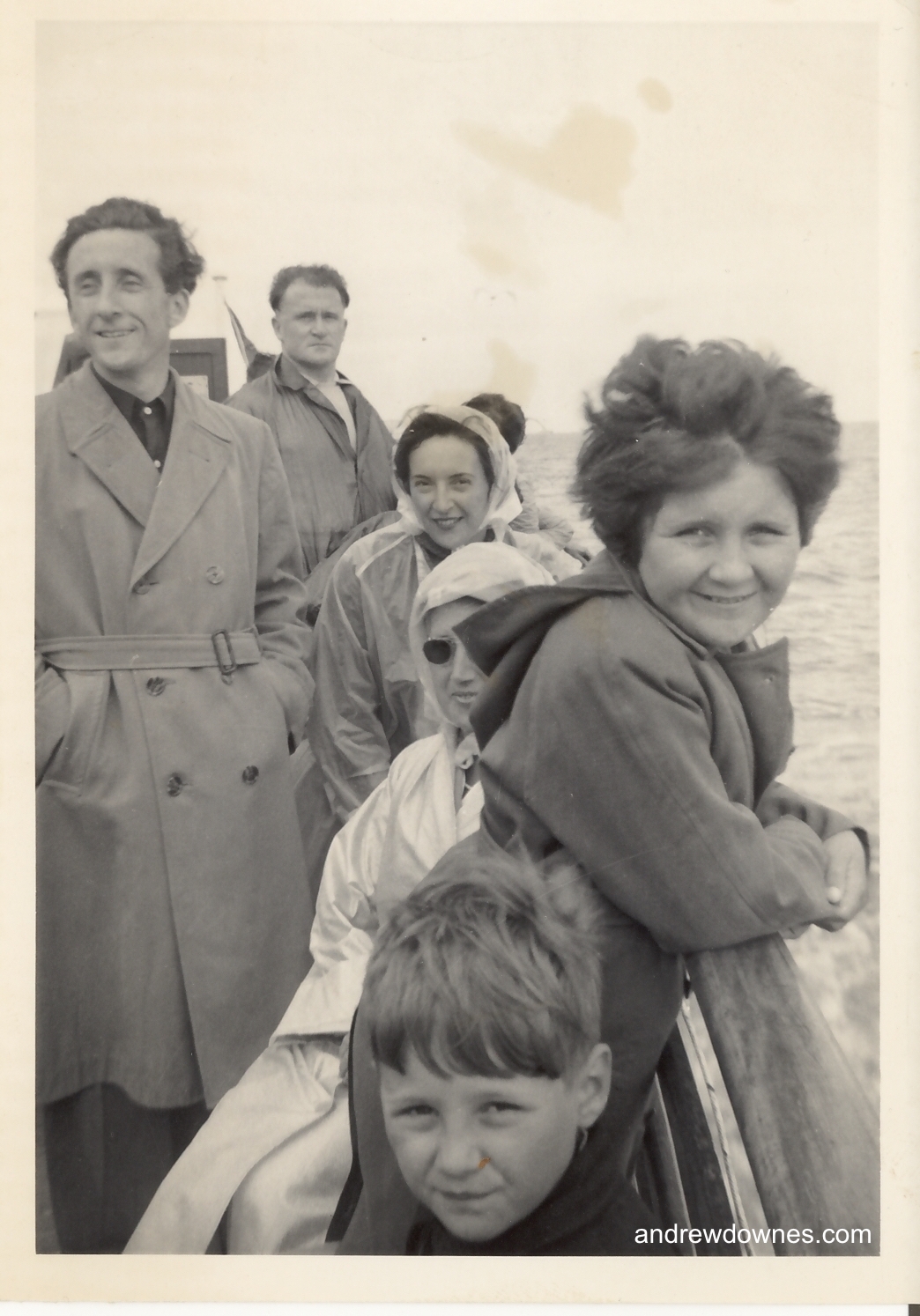 BELOW: Andrew on Exmouth beach 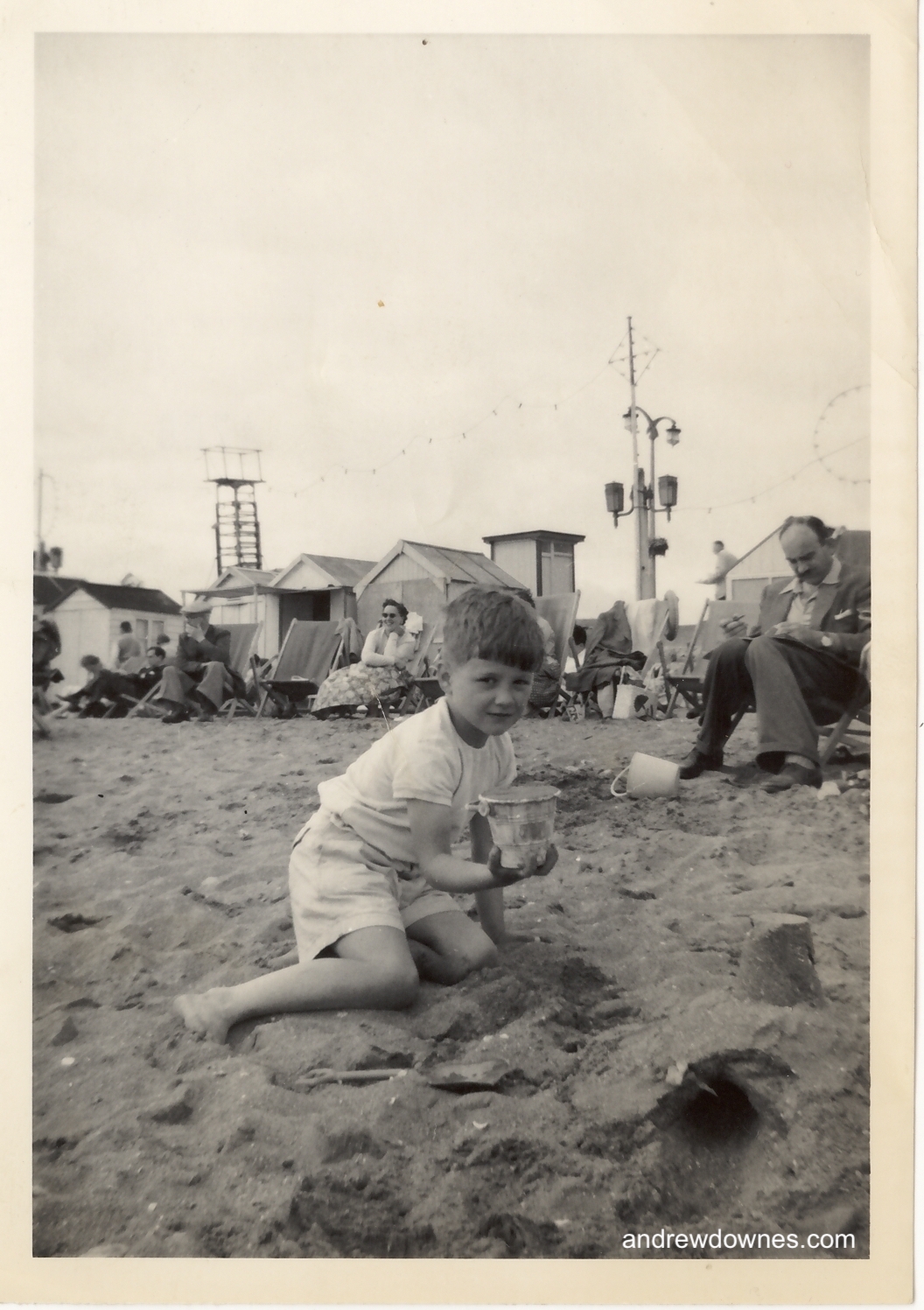 Andrew's first school was in Handsworth (he remembers a dark, Victorian building). 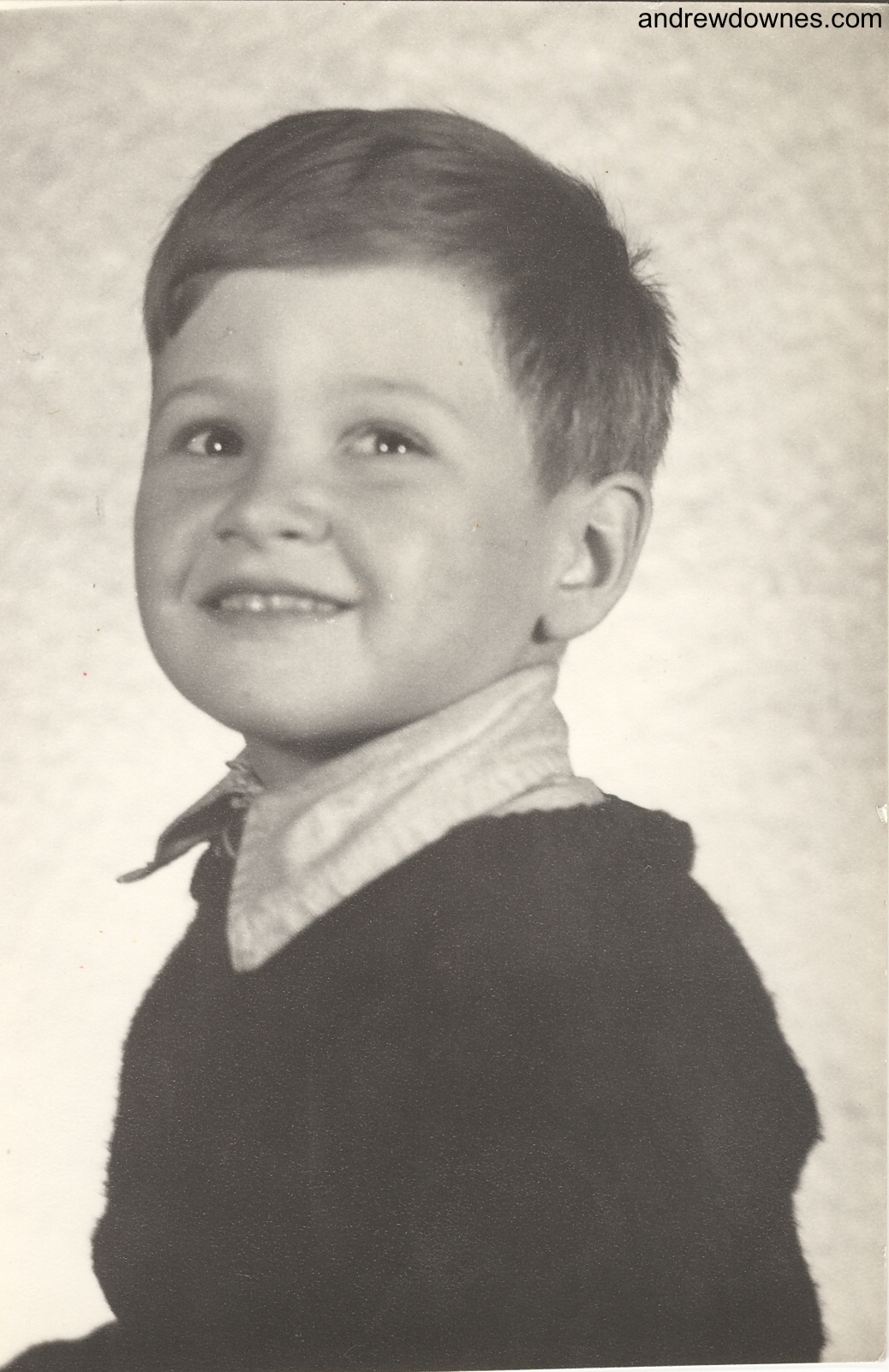 Andrew in his school uniform

Then when Andrew was 5, Frank began playing in the Midland Light Orchestra, so he didn't have to be away for so many evenings. The MLO was a better paid job, so Frank could afford to buy a house. It was a brand new build in Streetly.

Andrew in his Streetly County Junior School uniform outside his house in Streetly. 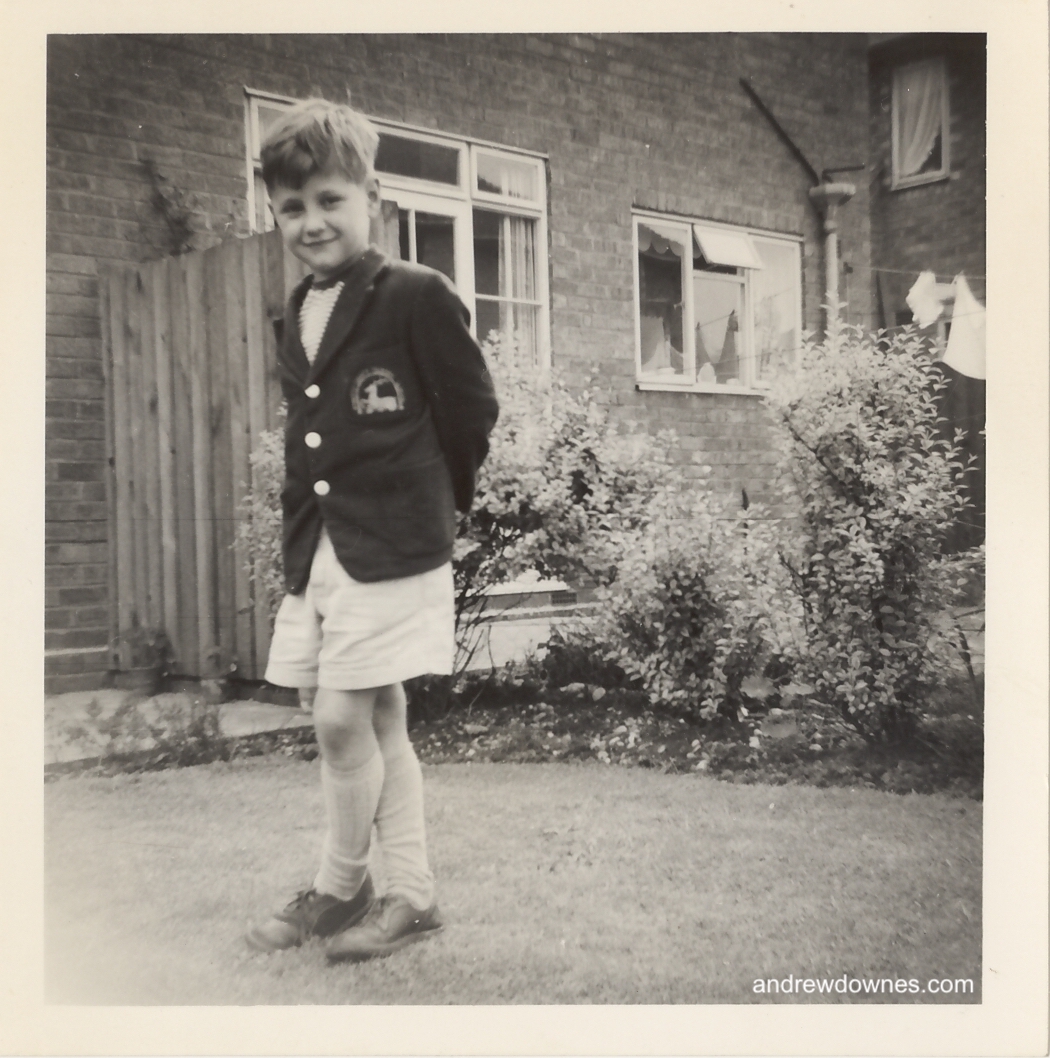 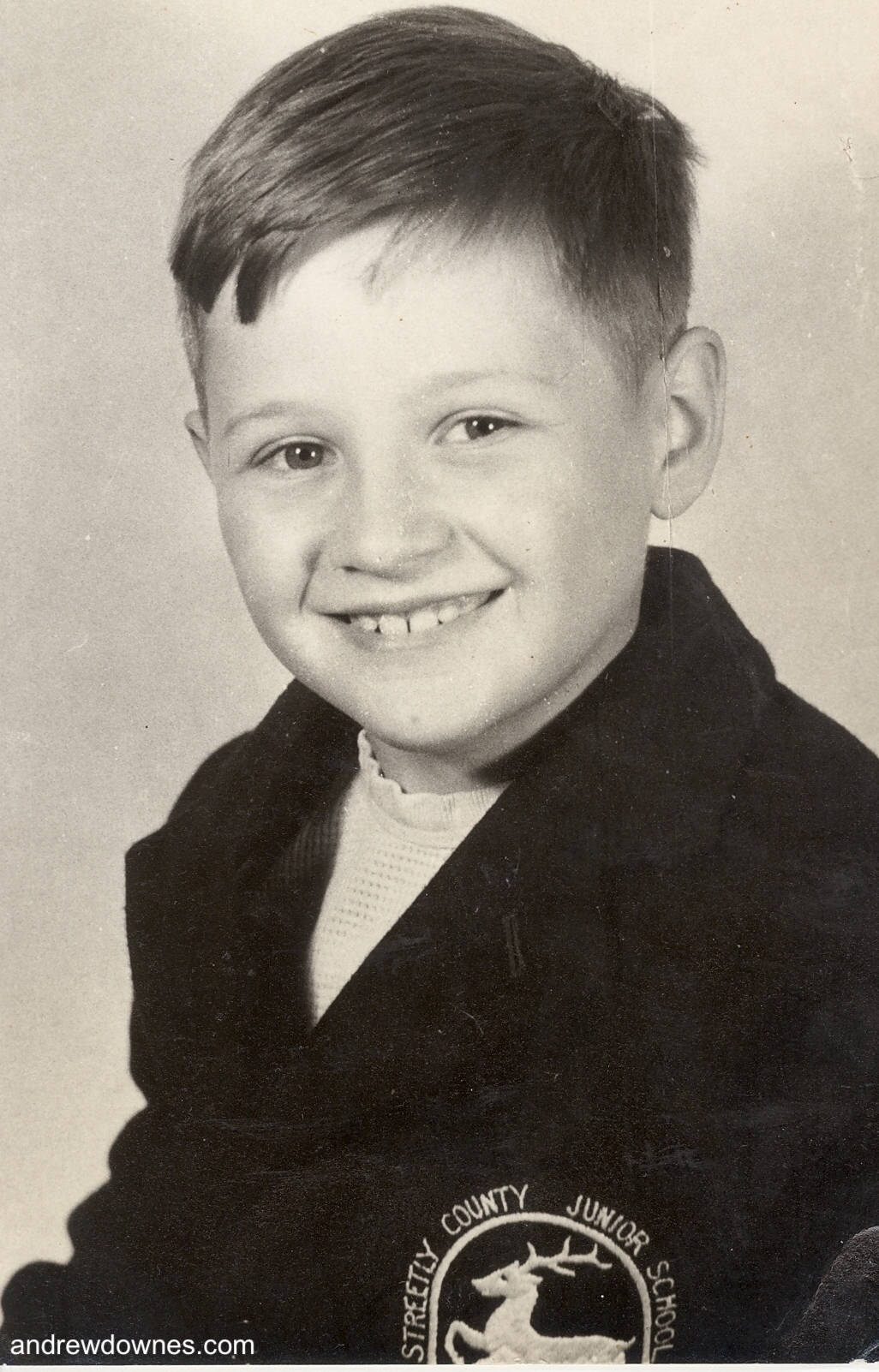 Streetly was much more in the countryside and Andrew remembers great days spent at a children's "camp" in the woods. His new school in Streetly was Victorian and dark at first, but got knocked down and rebuilt, with brand new buildings and equipment. During his happy Streetly days, Andrew's family had a series of budgerigars. One in particular was a real character, who loved going round on Andrew's clockwork train. One day the poor thing got his foot caught under the wheels of the locomotive. When the family took the budgie to the vet, and were asked how the accident happened, Andrew explained: "A train ran over his toe!"

Andrew had a beautiful treble voice and was often asked to sing Mendelssohn's O for the wings of a dove. One relative used to give him half a crown when he sang it.  It was obvious where Andrew's future career lay!

Here you can hear Andrew as a treble singing Handel's How beautiful are the feet by Handel:

Andrew passed the eleven plus and went to Aldridge Grammar School. His favourite teacher was the inspirational Alvena Grant, who had whole classes singing Schubert songs and Handel arias. She spotted Andrew's potential and invited him to join her newly formed Midland Boy Singers. Andrew loved singing in this excellent choir, which went to sing to the Pope!

Apart from music at school, Andrew was excellent at drama. He 'brought the house down' with his performance as Bottom in Shakespeare's A Midsummer Night's Dream and he had the audience rolling about laughing when he forgot the punchline in a 'Who dunnit' and said: "Oh, you know what I mean!"

The rest of Andrew's school career wasn't so successful. In subjects which didn't interest him, he didn't make any effort. In those days teachers did not mince their words when writing their reports. Nowadays their comments make hilarious reading, particularly one: "What little work he has done has been very poor."  Most comments are simply "Poor". One, however, in scrawny, almost illegible handwriting caught my attention when I first read it. I thought it said: "Good. Work shows great determination." When I looked again though, I discovered the real comment: "Poor. Work shows great deterioration." 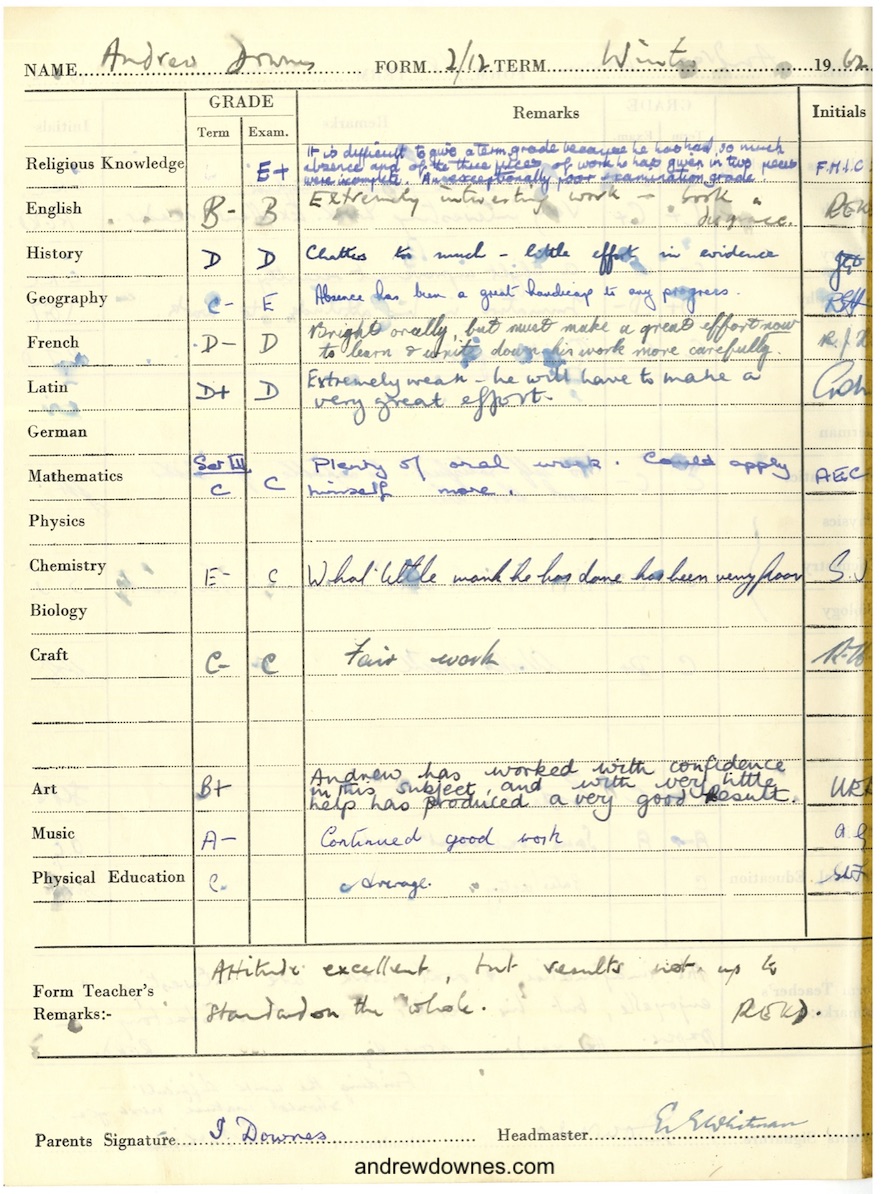 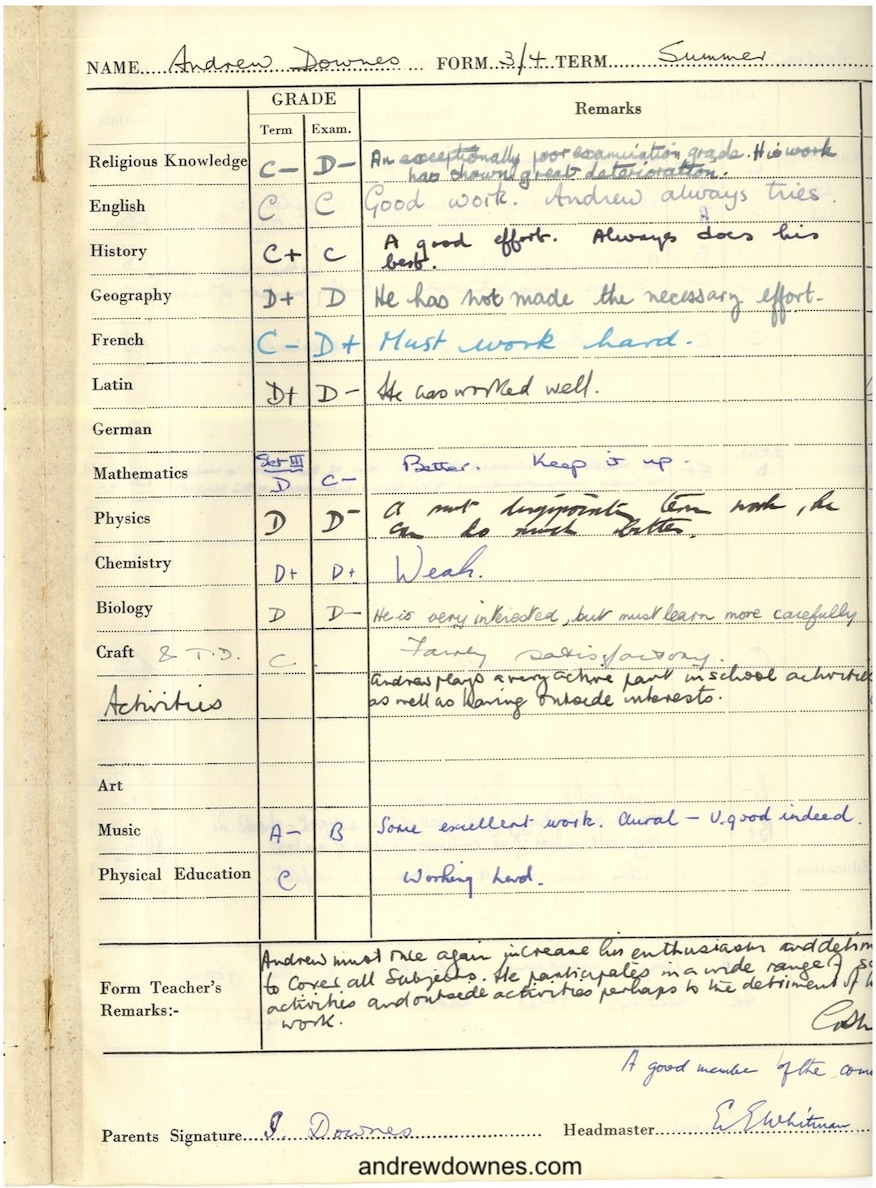 Unfortunately for Andrew, his school was a Technical Grammar, with a strong science and maths bias. Most of the teachers had no idea of Andrew's prowess in music. So when he got into Cambridge to study Music (having come 2nd out of all the candidates in the entrance exam), a lot of the teachers wouldn't speak to him! Incongruously, the Headmaster wrote on the bottom of Andrew's reports comments like: "A splendid boy!" He obviously knew Andrew's acting ability and didn't read the other teachers' comments! Or perhaps the Head was impressed when Andrew set up the zoological society, which was extremely successful (because Andrew invited his school chums to come and see the animals mating!) In the holidays, Andrew's parents had to house quite a few Guinea pigs, who used to walk round in a circle, one behind the other, on their carpet and occasionally chew the edges!

Andrew's Dad taught him the piano and the horn. Frank was constantly telling him to practise his scales on the piano instead of all the improvising he did, but Andrew wanted to plough his own furrow. He chose singing and composing, partly because they were aspects of music in which his Dad wasn't an expert! Iris could never work out how Andrew had learnt to play the piano, because he never did conventional practice. He has always been a rebel!

Here is Andrew as a teenager in the 1960s singing the following countertenor solos:

Iris hence away from Handel's Semele (Andrew often sang this to us on the coach going to County Youth Orchestra and changed the words to "Iris where's me bag?" - because his Grandma was always saying this to his Mum!)

He was despised from Handel's The Messiah: