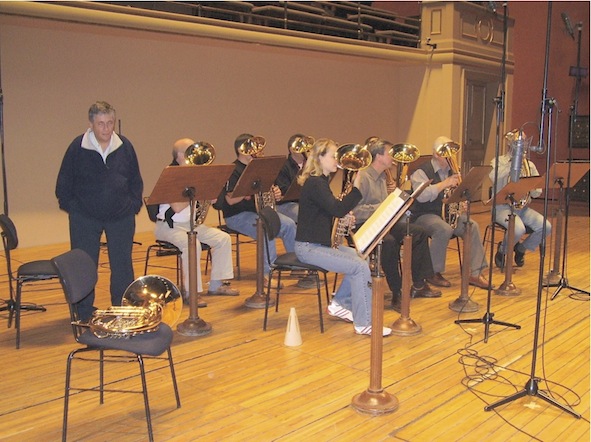 The World Premiere of Andrew Downes’ 5 dramatických částí pro 8 Wagnerových tub opus 80 (5 Dramatic Pieces for 8 Wagner Tubas) commissioned by the hornists of the Czech Philharmonic Orchestra, was given on Tuesday October 18th at the Dvorak Hall, Rudolfinum, Prague, in the Czech Republic. The new work was played as the first item in the second half of the concert, the interval giving the players the opportunity to adjust their embouchures from horn to Wagner Tuba.

Prelude begins quietly, but builds to two exciting crescendos.  The monumental chords could almost be seen rising to the roof in the wonderful acoustic of the Dvorak Hall.

Dawn of Love starts with a rising motif with a quiet, pulsating accompaniment, and builds to climaxes of dramatic intensity and emotion.

New Life is a bubbling, buoyant movement, suggestive, perhaps, of a baby bouncing up and down on its parent’s lap. This is interspersed by two quiet, reflective and profound passages.

In Meditation each instrument in turn, accompanied by the others, has its voice.  The movement is also characterised by chordal passages reminiscent of a choir singing antiphonally in Renaissance-like polyphony.

Jubilate: O be Joyful is rhythmically and emotionally charged throughout. Intermittent bursts of joyous music finally dominate and end the movement.

The performance by the Czech Philharmonic Hornists was outstanding.  Their sense of ensemble, immaculate intonation and velvet tone were truly remarkable. The audience gave the performance a long and enthusiastic ovation and many compliments. A number of people on the day following the performance said they had been unable to sleep because of excitement!  The players were obviously very taken with the work, and hopefully will record it for Czech Radio.

Article and photographs by Rosemary Cooper 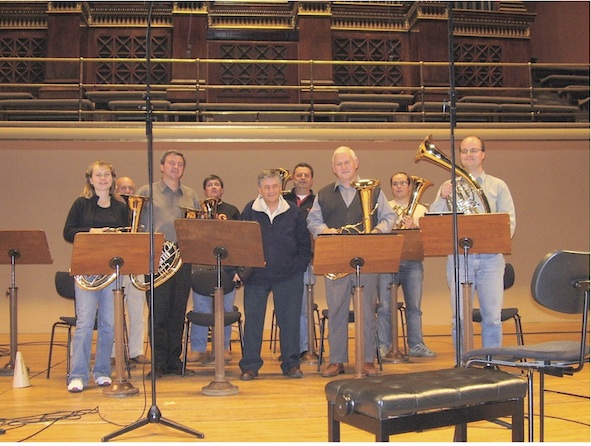